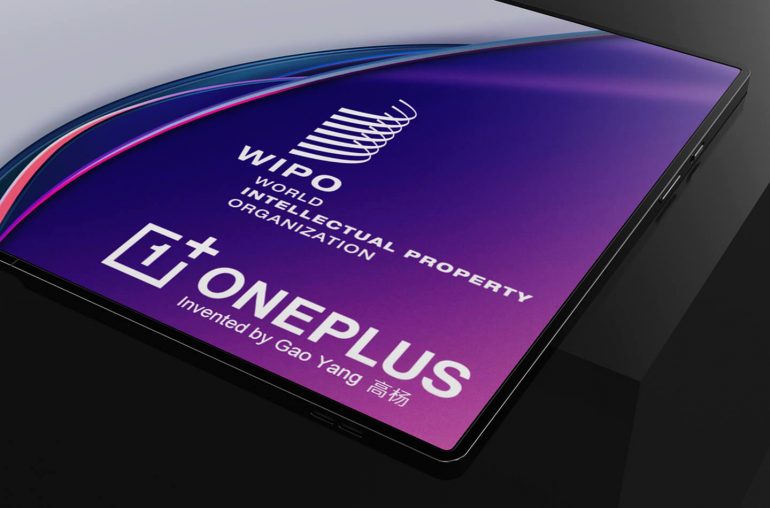 OnePlus patents an advanced triple smartphone with a dual hinge and a large tablet-sized screen. Comes with a handy slider to lock the folding position.

Several brands have announced a foldable smartphone. Samsung released the Galaxy Z Fold 3 and Galaxy Z Flip 3 halfway through the year. Xiaomi has also released its first folding phone this year, although the Xiaomi Mi Mix Fold is only available in China. The same goes for the Huawei Mate X2. For a while it was thought that the Google Pixel Fold would also arrive this year, in the meantime it has become clear that Google has cancelled the release for the time being. Nevertheless, several more folding models are expected in the near future.

Honor seems to be getting ready to announce its first foldable phone soon, the Honor Magic X. If we are to believe the rumors, Oppo will also present its first foldable smartphone before the end of 2021. The ‘Oppo Find Fold’ will reportedly get the same kind of form factor as the Galaxy Z Fold 3, with an 8-inch inward-folding screen.

Although Oppo has applied for several patents for foldable phone models, this does not apply to sister company OnePlus. Nevertheless, it is expected that once an Oppo foldable has been announced, it will not be long before an OnePlus foldable smartphone will also appear. 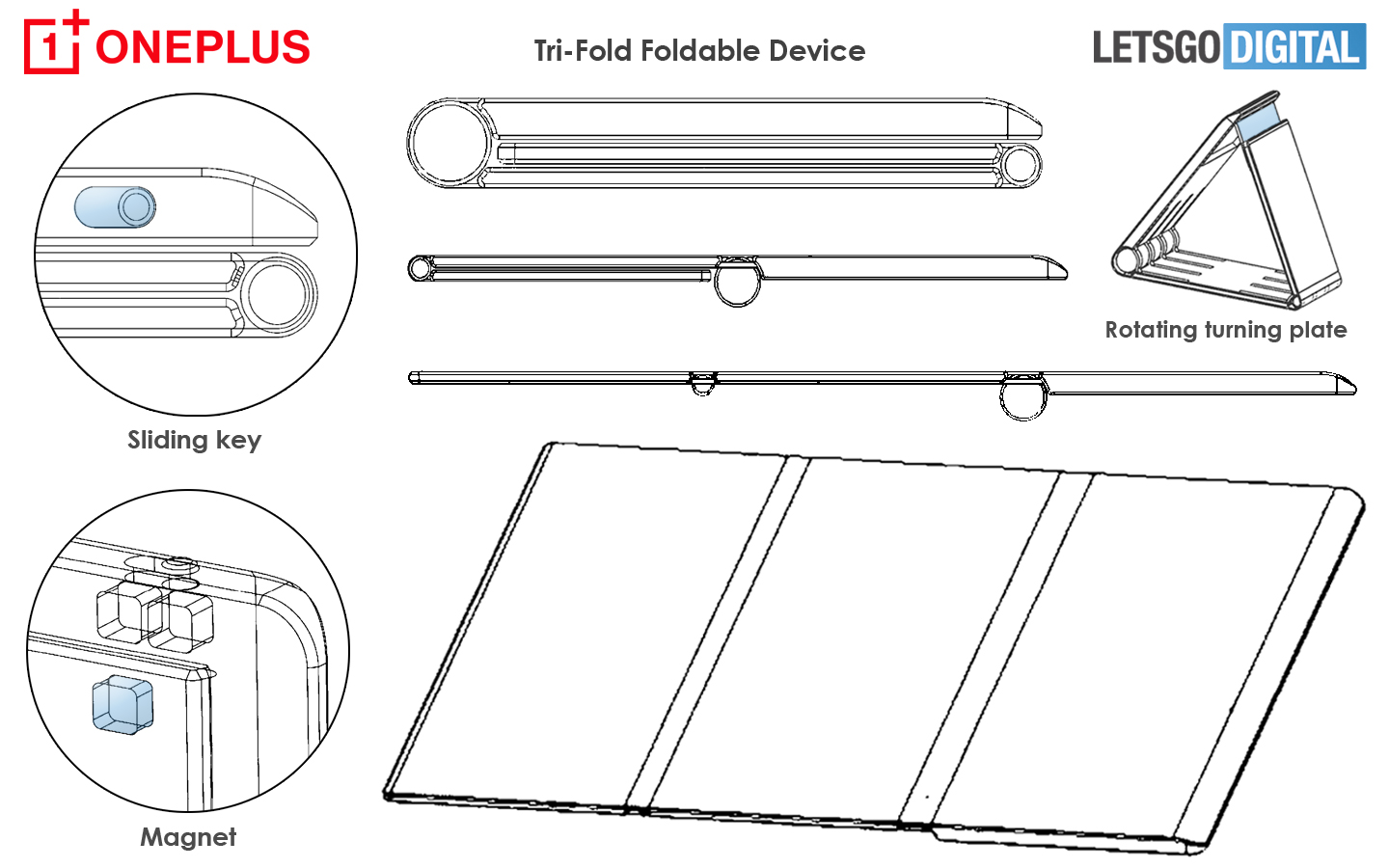 In the meantime, LetsGoDigital has discovered a patent from Shenzhen OnePlus Technology for a folding phone with three display parts – invented by Gao Yang. It is the very first foldable smartphone patent from OnePlus that LetsGoDigital reports on. That is remarkable, since other leading smartphone brands have already registered dozens of foldable models.

The documentation titled “Mobile terminal” was requested by OnePlus in China at the end of 2020. The publication took place on July 20, 2021. Afterwards, the Chinese documentation has also been included in the World Intellectual Property Office (WIPO) database for worldwide protection of the patented technology.

To get a better idea of ​​this OnePlus tri-fold smartphone, Parvez Khan, aka Technizo Concept, made a series of renders for LetsGoDigital based on the patent images.

It is a foldable phone that consists of three display parts and a dual hinge, which can be folded in different ways. As a result, more user applications can be created and the user can benefit from an extra versatile device. When unfolded, you have a large tablet size to work extra productively.

In its most compact form, the device has the dimensions of a regular phone – of course the device is a bit thicker. Nevertheless, the device looks slimmer than most tri-fold smartphones that we have reported on to date. The flexible screen is located on the inside, meaning it remains well protected against scratches and bumps when folded. 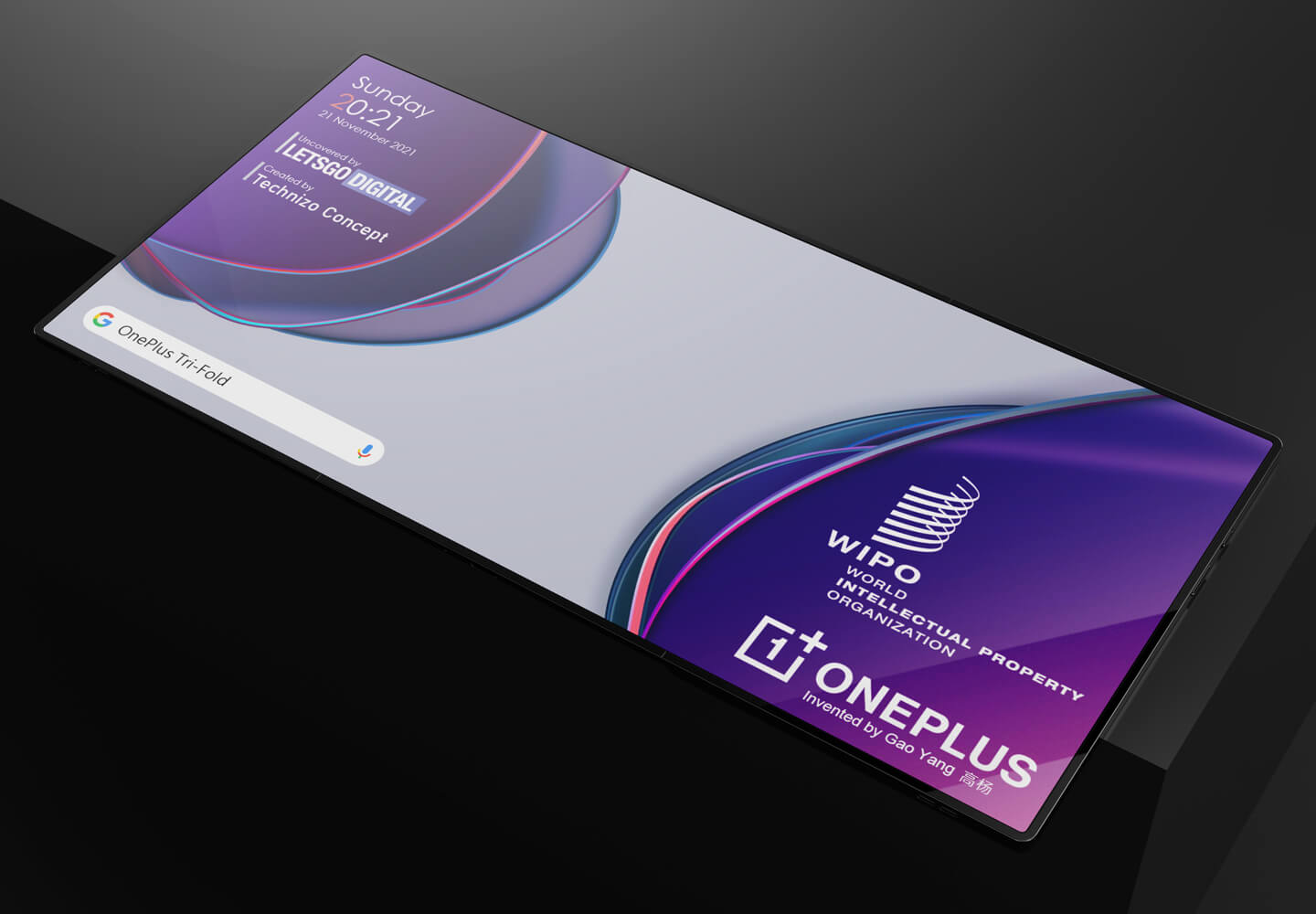 You can fold the first display part under the second part. Together, these two display parts are just as thick as the third display part. The patent documentation makes mention of multiple folding positions. For example, it should be possible to fully or partially unfold the device, depending on how the user wishes to use the device.

When the folding phone is fully unfolded, the user has a large tablet-sized display at his disposal. The size seems to be similar to the prototype Samsung Display showed earlier this year and the TCL tri-fold that was demonstrated last year. If desired, the user can also use only one or two display parts. This benefits the versatility of the device.

OnePlus also seems to see an opportunity to place the device in a triangle. In this way, the folding phone can be used by several users. As an extension of the first screen part, OnePlus has integrated a rotating turning plate, which can be clicked onto the third display part – to ensure the device remains in the triangle position. On one display side, for example, a YouTube video can be viewed, while the other side can display a messaging application or internet browser.

Furthermore, OnePlus has seen an opportunity to apply a magnetic slider system. However, it’s not the Alert Slider OnePlus got known for. In this case, the circular sliding knob serves to lock the device’s folding position. This prevents the device from folding or unfolding unintentionally during use. The slider is incorporated in the frame of the thick display part. This way, it remains easily accessible, regardless of how the phone is folded.

Optionally, a dual-sided display can be used, whereby both the front and back of the screen are provided with touch functionality. Handy, because this way OnePlus can add a cover screen – as we are already used to from the current Fold models.

The device does not fold in a Z-shape – as was the case with the tri-fold smartphone from Samsung Display and TCL. This has a clear advantage and disadvantage. The advantage of OnePlus’ solution is that the flexible screen remains fully protected when you carry the device with you in the folded position. However, the Z-shape construction of Samsung and TCL has the advantage that the integration of a cover display is unnecessary – which means that costs can be saved.

If it becomes too difficult to apply one large flexible screen, OnePlus can also opt for multiple displays – as we know from the Microsoft Surface Duo, for example. 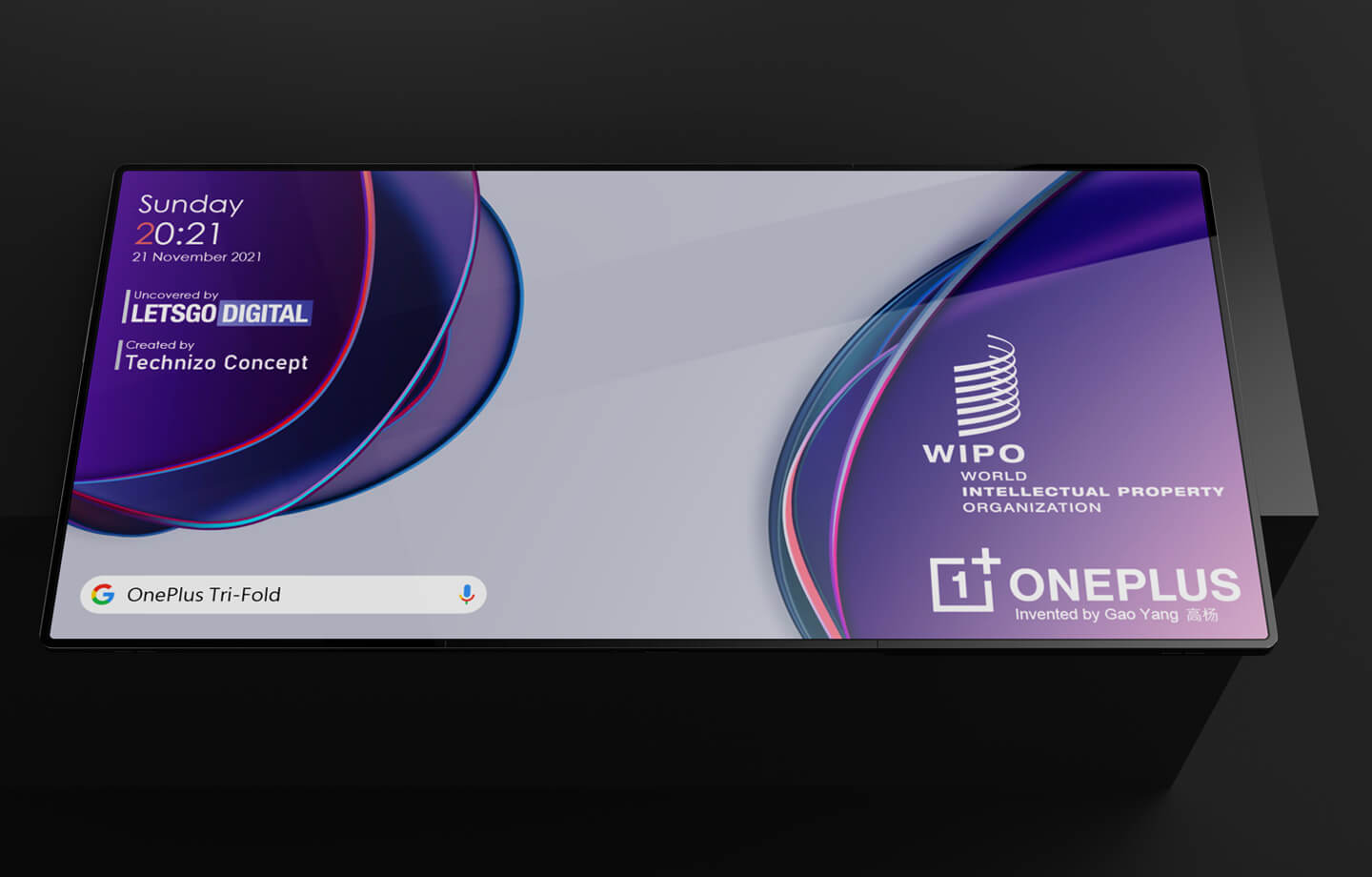 It remains unclear when OnePlus will introduce its first foldable. Possibly the ‘OnePlus Fold’ will arrive in 2022. In any case, it is obvious that the company will first introduce a folding phone with two display parts – after all, this will be cheaper and easier to manufacture than a tri-fold model.

OnePlus has been relatively quiet about folding models for the time being. Halfway through this year, many were surprised when the company put a teaser online of a dual-screen foldable smartphone – at the time of Samsung Unpacked.

The timing was striking, as all the attention was focused on the Samsung Galaxy Z Fold 3 and Z Flip 3 which were both introduced during Galaxy Unpacked. Afterwards it turned out to be purely a clever publicity stunt by OnePlus. It was a promotional deal in the US where you could buy the OnePlus 9 series at a 50% discount – ‘because 2 devices is better than 1’, the statement said.

Before the Chinese manufacturer will release a folding phone, the high-end OnePlus 10 series is expected, of which the OnePlus 10 Pro will be the new top model. The global release of these models is planned for late March / early April 2022. In China, the new top models will arrive a month or two earlier.

It is possible that the company will present its first foldable phone later in 2022. Sister company Oppo seems to want to release its first folding phone next month. Since the two companies are increasingly being merged, it is certainly not inconceivable that OnePlus will follow Oppo’s steps. As we have also seen with smartwatches. After the Oppo Watch was introduced in March 2020, OnePlus followed this year with its own OnePlus Watch.

The same seems to apply to tablets. At the time of writing both brands have no tablets in their assortment, but this seems to be changing soon. Some time ago images of the alleged Oppo Pad tablet appeared online. Halfway through this year, OnePlus also applied for a trademark for OnePlus Pad – most likely the name for the first OnePlus tablet. In the coming weeks and months, more will undoubtedly become known about OnePlus’ plans for the future. 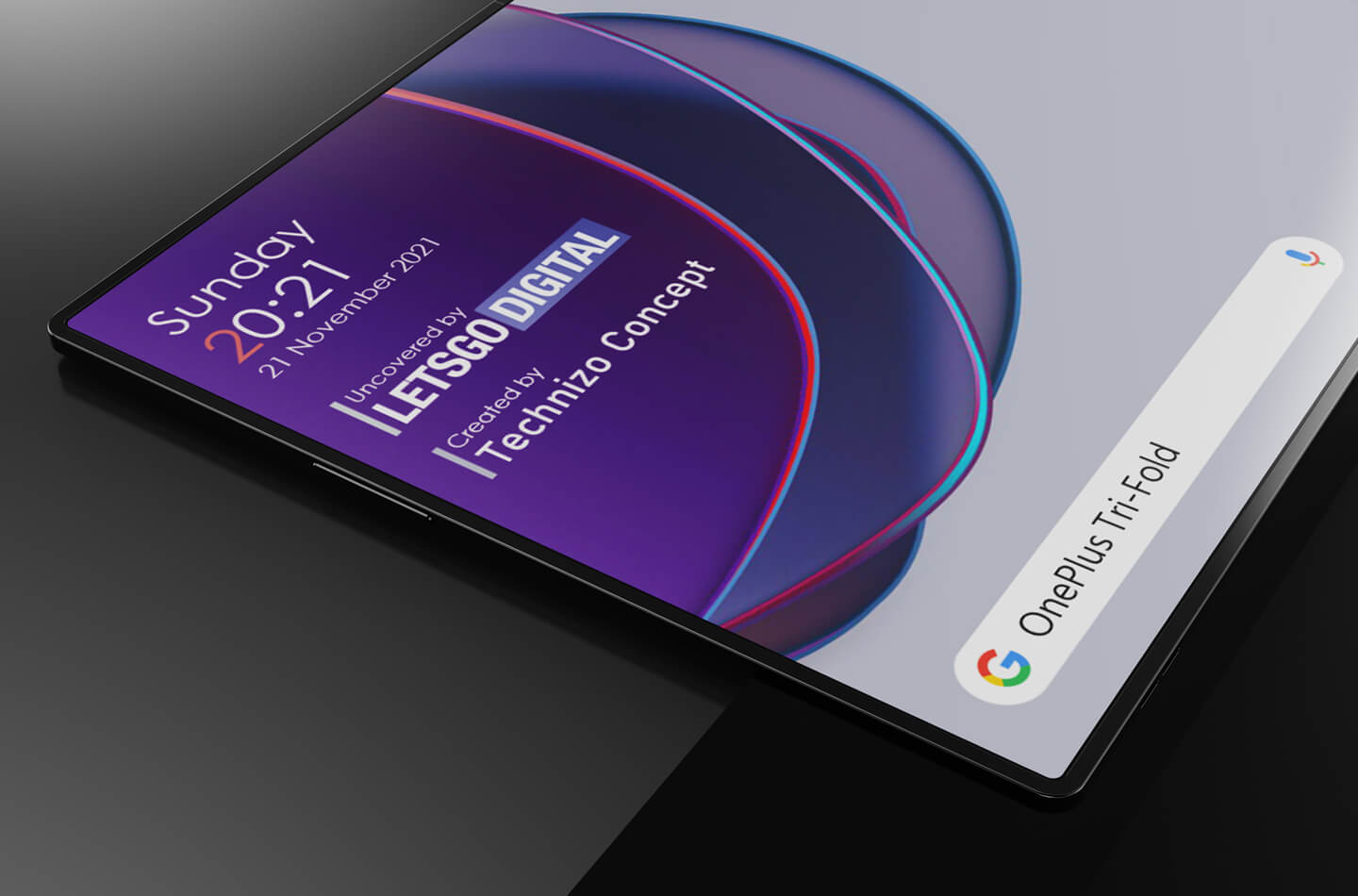 Note to publishers :  The 3D product renders of the OnePlus foldable smartphone are created by Parvez Khan, aka Technizo Concept in collaboration with LetsGoDigital.  The images are based on a patent of Shenzhen OnePlus Technology. This product is not for sale. You can use the copyrighted images for your own website, YouTube and/or social media channels, please be so respectful to include a clickable source link into your publication.