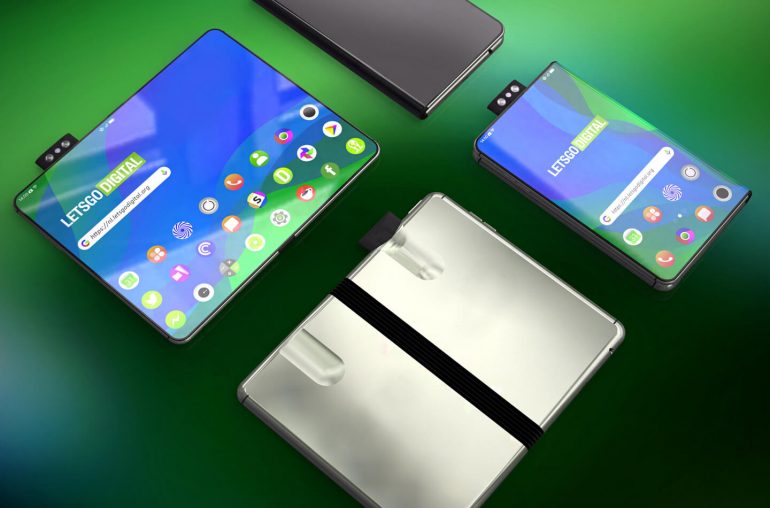 New patent shows production renders of foldable Oppo phone. The smartphone has a pop-up system with a dual camera and unfolds into a tablet format.

Oppo is one of the manufacturers that is developing a foldable smartphone. At MWC 2019, the Chinese manufacturer showed a working prototype of a device that can be folded outwards. In terms of design, the Oppo smartphone looked very similar to the Huawei Mate X. Both feature a side bar.

However, the president of Oppo was of the opinion that the device -especially when folded- simply offers too little added value compared to a regular smartphone. Although no further explanation was given, you may assume that he was talking about the side bar. As such a side-bar provides a lot of unused space, making the mobile phone unnecessarily wide and leaving a relatively small screen space. Hard work is being done in the meantime to ensure that the foldable smartphone does offer sufficient added value.

In February this year, LetsGoDigital reported on a patent for an Oppo foldable phone with a pop-up camera. By opting for such a camera system, the side bar can be omitted, creating an almost full-screen smartphone design. To get a better picture of this design, LetsGoDigital created a series of 3D renders. A new patent shows that Oppo has also made their own production renders of this same model. 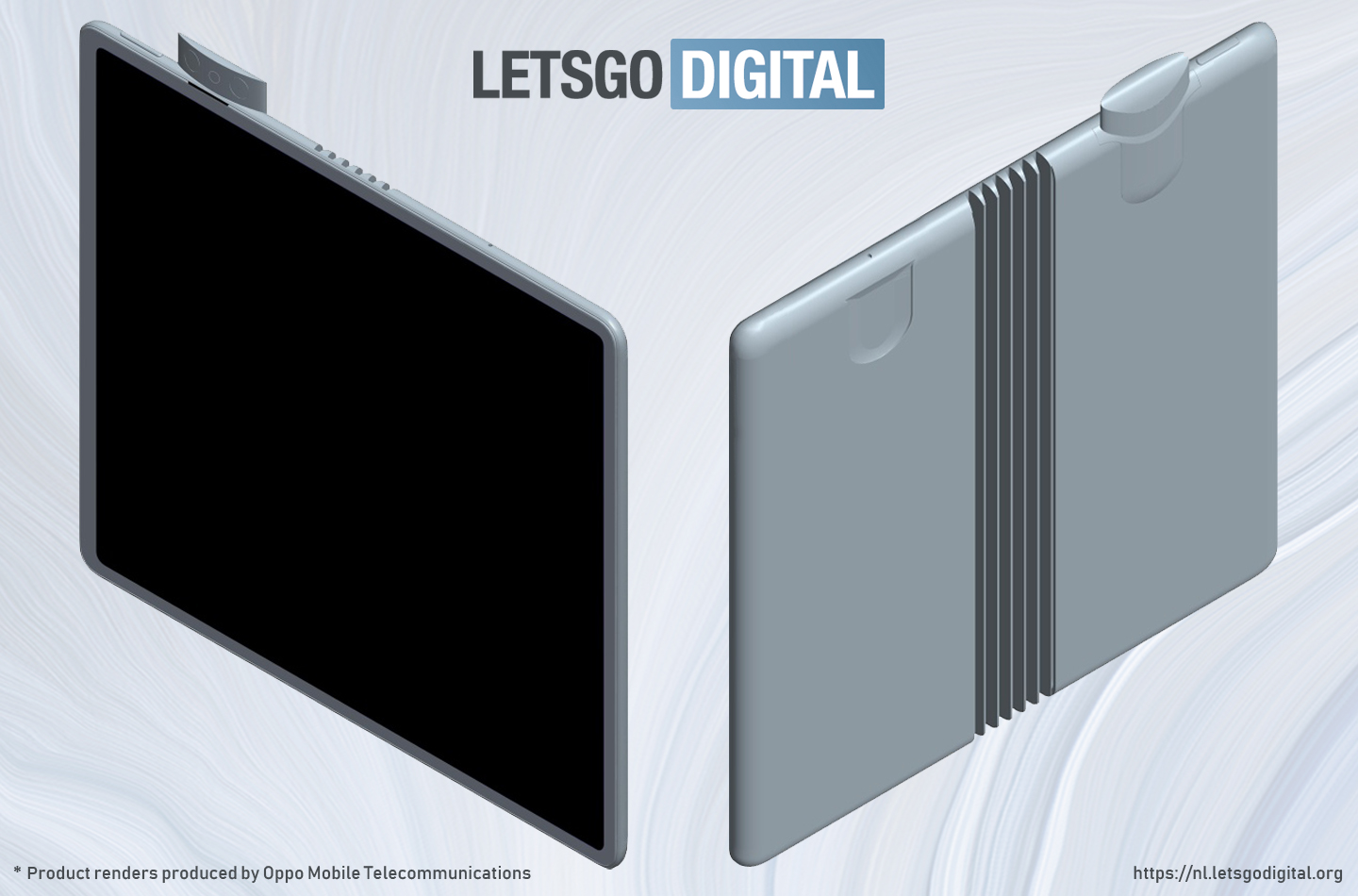 Oppo has made 3D renders of their foldable phone

At the end of October 2018, Guangdong Oppo Mobile Telecommunications filed a design patent with the Global Design Database of the WIPO (World Intellectual Property Office). The patent was published on 7 June 2019 and shows 42 color renders of the folding device. In addition, 51 sketches have been added to the patent.

Since it is a design patent, the description is very brief. It does state that the foldable phone comes with a telescopic camera. Although you may directly think of a zoom camera, I believe that Oppo is referring to the pop-up camera, which is telescoped out of the housing. This opinion is based on other patents that I have come across from the Chinese manufacturer over time. 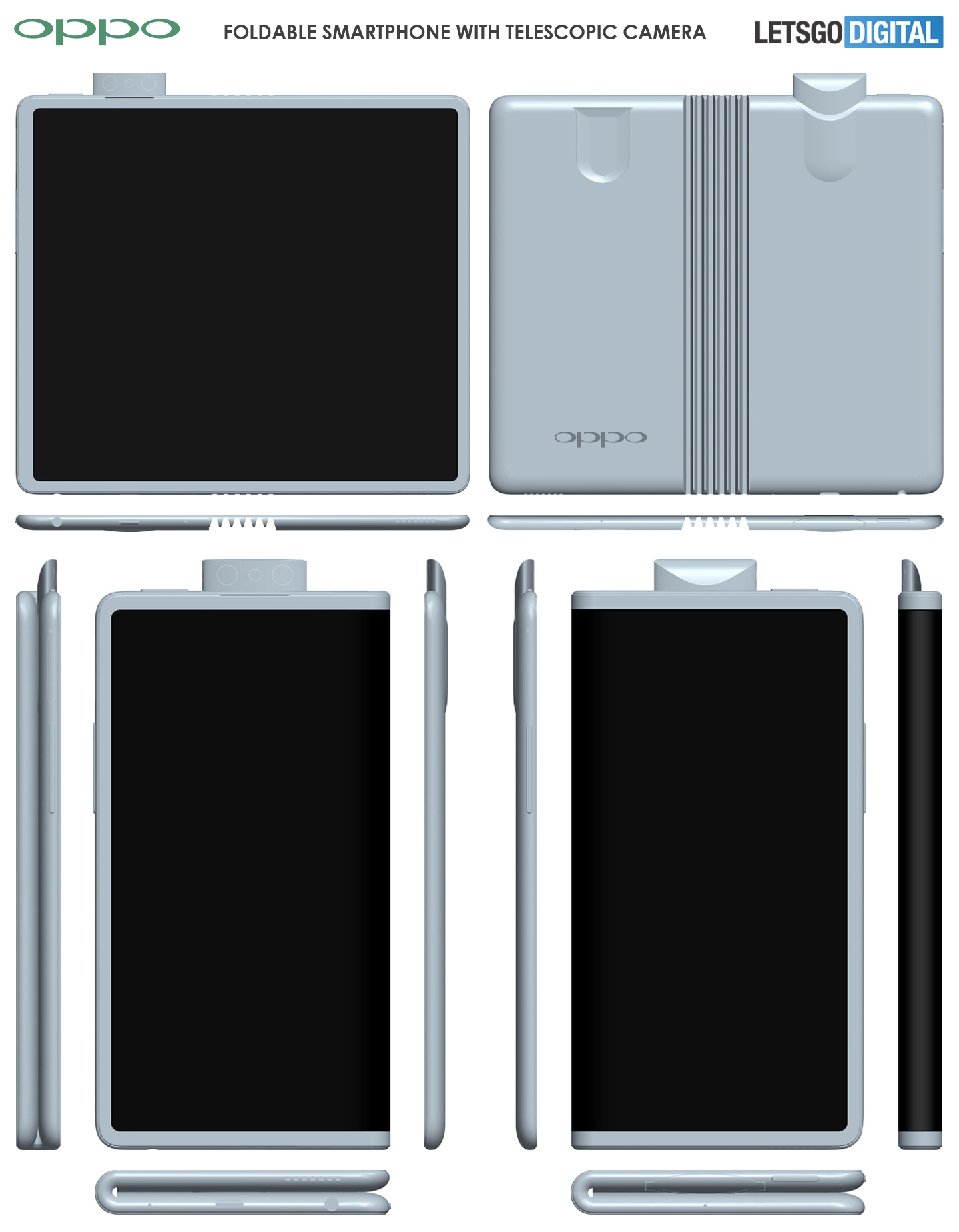 The patented phone folds out into a tablet format. When you fold the smartphone, the display is on the outside. By using a pop-up camera in the left side of the housing, the user can take photos when the device is folded and when it is fully unfolded. The camera system seems to consist of a dual camera with flash. The camera is slightly convex in shape, as soon as the phone is folded, it falls seamlessly into the housing. The design looks very stylish.

Directly next to the pop-up camera, there seems to be an on / off button. The receiver is placed directly under the pop-up camera. A microphone is also visible at the top, which is incorporated in the right-hand side of the device. A second microphone is visible at the bottom of the phone. We also see a connector here to charge the device. In addition, this foldable phone comes with a 3.5mm headphone connection.

An elongated button is visible on the left, probably serving as a volume button. The SIM compartment is placed directly above it. The right side is completely free of buttons. The wide hinge ensures that the smartphone can be folded completely – without any visible seams.

Besides the Royole FlexPai, there are currently no foldable phones available. The Samsung Galaxy Fold should have been in stores for over a month now. However, the launch was postponed at the last minute, after several review copies broke within a day. All defects were related to the flexible display. Since then it has been remarkably quiet on the side of Samsung, a new release date for the Fold has still not been announced.

The Huawei Mate X will be launched in the summer of 2019, this should be the world’s first 5G folding smartphone. Huawei, however, has recently suffered heavy blows, after America has decided to blacklist the company. The Chinese manufacturer has been found guilty of espionage. The result is that Huawei is no longer allowed to manufacture any Android smartphone. Since, various retail sites in Europe report a drop in sales of Huawei smartphones of no less than 40%.

Although Huawei is working hard on the development of their own HongMeng operating system, the question remains how this OS will be experienced in practice. Various companies, including Twitter and Facebook (which also includes WhatsApp and Instagram) have already indicated that Huawei can no longer pre-install these applications on their smartphones. All these negative developments could lead to the launch of the Mate X being postponed. After all, who is willing to pay € 2300 for a smartphone of which the operation of the OS is still unknown?

Oppo on the other hand seems to be going strong. The company released its new smartphone series at the end of April, consisting of three stylish models. The Oppo Reno, the Reno 10x Zoom and the Reno 5G. The first expect reviews confirm this new line-up is very competitive and unique. Surprisingly, the Oppo Reno 5G was also the first 5G smartphone to launch in Europe. Oppo partnered with the Swiss telecom Swisscom and launched their 5G smartphone on May 1, 2019.

New models will be added to the Reno series in the near future, last week the cheap Reno Z was launched in home country China. A recent trademark suggests the Reno Z and Reno F will also be introduced in Europe in a short while from now.

The company shows innovation after innovation. Like last week, Oppo and Xiaomi both showed off a video demonstration of a smartphone with an under-screen camera. This means the definitive end of the notch. In November last year, LetsGoDigital already reported on a patent for an Oppo smartphone with camera under the display. When this device is ready for production is still unknown, but it definitely is coming.

Oppo was also among the first smartphone manufacturers -together with sister company Vivo- to introduce a full screen smartphone last year. The Oppo Find X had a slider camera in order to realize a full-screen design. In fact, the company has a much longer experience with unique camera systems. Oppo was able to release the N1 in 2013, this was world’s first smartphone with a rotating camera.

At the time Oppo smartphones were not yet available in Europe, but nowadays all the latest devices are available in most European countries. Earlier this year the company also opened a shop-in-shop in MediaMarkt, both in the Netherlands and Turkey. It is expected more shop-in-shops will follow later this year.

Here you can find the patent from Oppo.