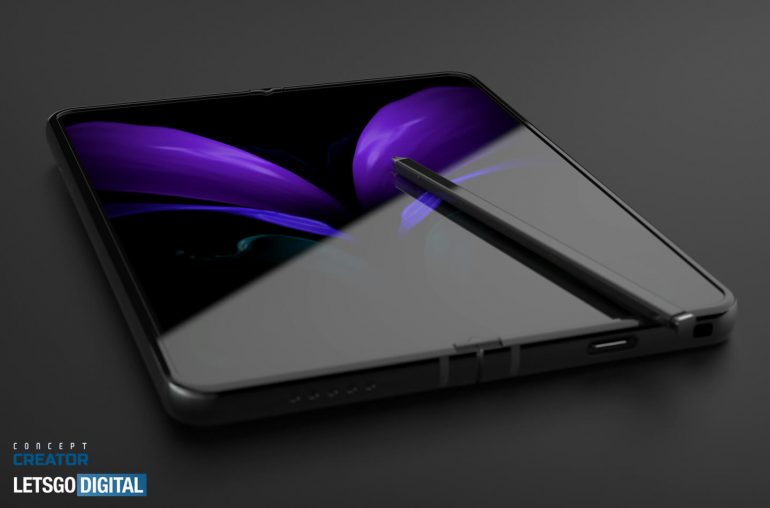 Samsung is expected to release its first foldable smartphone with S Pen compatibility in 2021. This is what we expect from the Galaxy Z Fold 3.

Samsung will most likely introduce numerous new smartphone models in 2021. On January 14, the Samsung Unpacked 2021 event will take place for the official introduction of the Galaxy S21 series. The Galaxy Z Flip 2 (or Z Flip 3) clamshell phone is expected in spring. In addition, Samsung seems to be planning to release two new Z Fold foldable smartphones in 2021. The first will be the Galaxy Z Fold FE, which will be a cheaper edition to the existing model. The Samsung Galaxy Z Fold 3 will be the new top model, in this publication you can read more about our expectations regarding this flagship.

It was early 2019 when Samsung proudly introduced its first foldable smartphone. However, the release of the Samsung Galaxy Fold went anything but smooth. The launch was delayed by several months at the last minute due to several problems with the hinge and flexible display.

With the introduction of the Galaxy Z Fold 2 things went a lot better. The folding phone was improved in many ways, the device also got a significantly more modern design – a larger cover screen was implemented and the wide notch was replaced by a hole-punch camera. Moreover, this 2nd generation actually functions better, the hinge has been further optimized and more durable Ultra Thin Glass has been used for the flexible screen.

Despite all the improvements, Samsung also managed to lower the price slightly. The Galaxy Fold retailed at a price of € 2,020, the Z Fold 2 got a more strategic suggested retail price of € 1,999.

Will Samsung again be able to make such big leaps forward with the Galaxy Z Fold 3 5G, or are smaller adjustments expected this time? 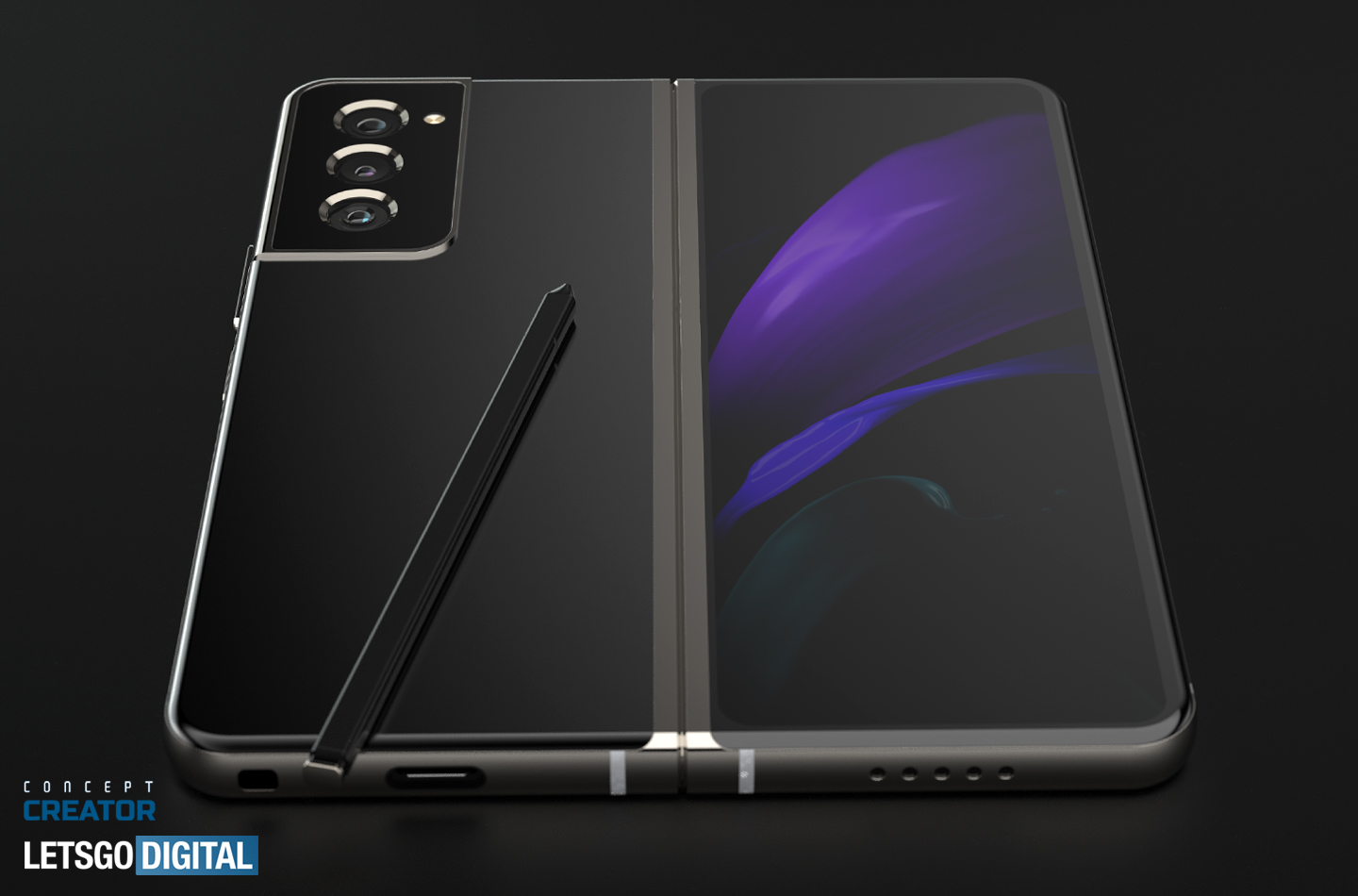 If the rumors prove to be correct, Samsung will provide its new flagship with a special addition. The Samsung Z Fold 3 is expected to be the first foldable phone to support the Samsung S Pen. This would undoubtedly take the user experience to a whole new level.

It has long been speculated that Samsung wants to make the foldable phone compatible with the famous stylus pen – which has characterized the Galaxy Note series for years. The large display area ensures that the benefits of the S Pen can be optimally utilized. In October last year, LetsGoDigital already managed to discover a patent from Samsung for a foldable smartphone with S Pen.

In a 2020 year-end statement, Tae Moon Roh, CEO of Samsung’s mobile division, made a remarkable statement. “In 2021, the first Samsung smartphones with S Pen will be announced, which will not be included in the Galaxy Note series,” the CEO said.

It is now clear that the Samsung Galaxy S21 Ultra, which is expected next week, also comes with S Pen support. This will be the first S-series smartphone to be made compatible with Samsung’s stylus pen. However, this phone will lack the option to store the stylus pen in the phone itself. Instead, Samsung will release optional accessories in the form of phone cases with a storage compartment for the S Pen built-in.

With the Galaxy Z Fold 3, Samsung will most likely choose to add a compartment to be able to store the S Pen in the device itself. To visualize Samsung’s new foldable phone, Dutch designer Jermaine Smit, aka ConceptCreator, created a video animation showing the new top model from all sides. Of course the famous S Pen is also visualized. The 3D product renders in this publication were also designed by Jermaine for LetsGoDigital.

Although the CEO of Samsung has not literally said that the Galaxy Z Fold 3 will also be made compatible with the S Pen, there have been several signs that the new folding phone can also be used with the iconic pen. Samsung has long intended to add this functionality, but it turned out to be pretty difficult to make the stylus function properly on the folding line of the flexible screen.

The Samsung Galaxy Note 21 series, which is expected in the second half of 2021, will most likely be the very last addition to the now 10-year-old Note line-up. By introducing a S Pen compatible Galaxy S-series smartphone – the S21 Ultra – and a foldable model with S Pen – the Z Fold 3 – this year, it will become easier for loyal Note users to make the switch to another Samsung Galaxy smartphone.

Then there is another rumor that haseems to be the main reason that there s already been discussed a lot online. Will the Samsung Galaxy Z Fold 3 have an under-display camera? This new selfie camera technology has been under development for several years by Samsung and other renowned phone manufacturers. Last year, the world’s very first phone with an in-display camera was released, the ZTE Axon 20. 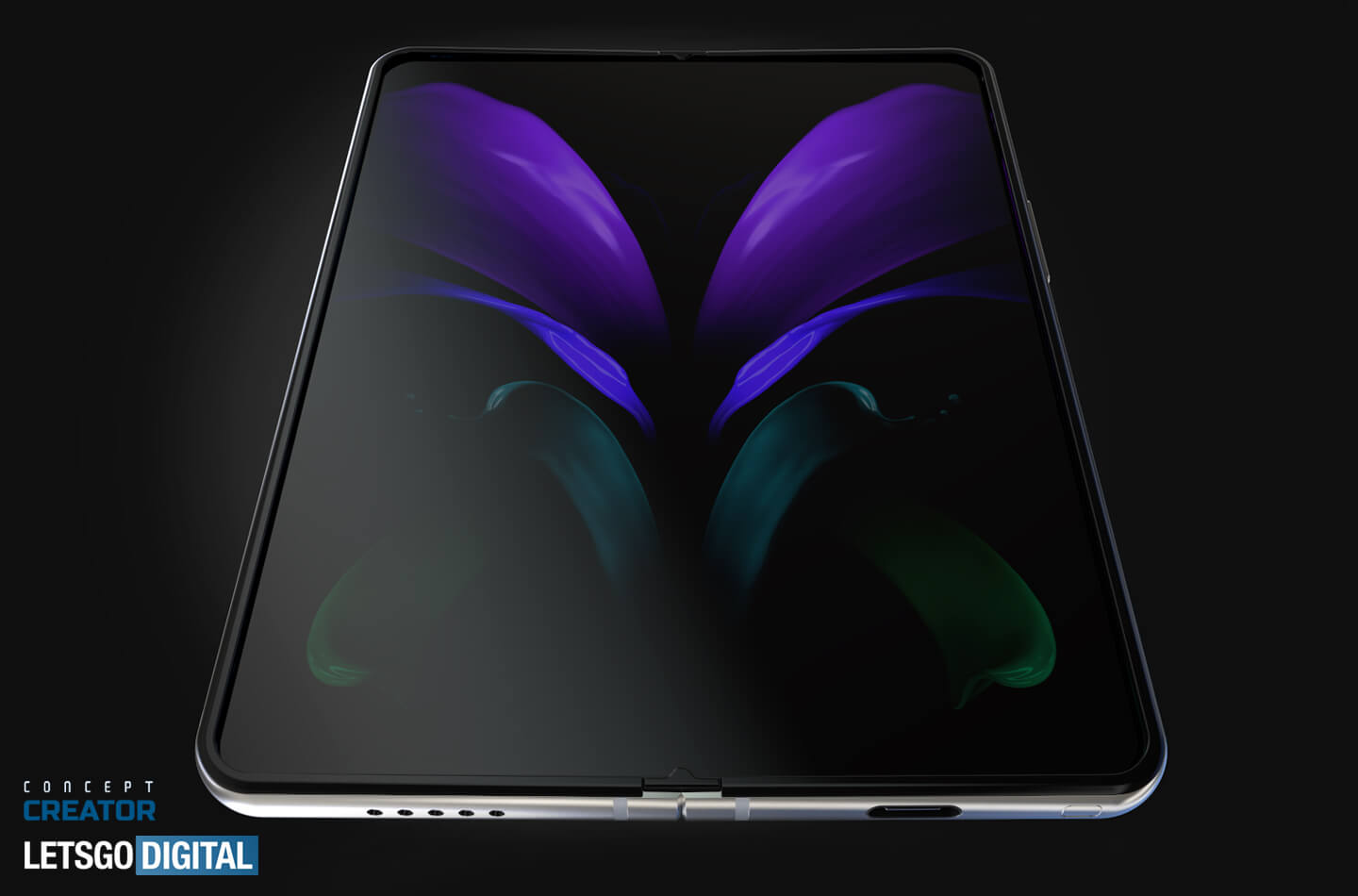 By placing the selfie camera under the screen, smartphone manufacturers can create a full screen design – without notches or screen holes. However, the image quality of this new type of front camera still leaves much to be desired, this also seems to be the main reason that to date only one smartphone manufacturer has implemented this new technology, which is still under development, in an consumer product. Still, this naturally increases the pressure on other manufacturers to also introduce an under-display camera smartphone.

However, with the shameful launch of the Galaxy Fold still in mind, Samsung will be extra motivated to make the launch of the Z Fold 3 a success. Therefore making hasty decisions will be avoided. The addition of an S Pen would make the Samsung Z Fold 3 already a worthy successor to the Fold 2. Samsung would therefore take unnecessary risks to equip the Z Fold 3 with an under-display camera. It seems a lot more likely that the foldable smartphone will be equipped with a punch-hole camera again.

In the meantime, the South Korean manufacturer may release a Galaxy A-series smartphone to demonstrate this new technology. With a bit of luck, the first high-end Samsung smartphones with a camera under the screen will be released in 2022. However, we would not be surprised if it then takes another year before this technology is also applied to a smartphone with a flexible display. After all, even the fingerprint sensor on the Z Fold 2 is not yet placed under the screen – it is integrated into the power button.

In the meantime, Samsung may opt for some kind of invisible selfie-camera. By using a moving sub-display, the hole punch camera is only visible when it is actually in use – the South Korean manufacturer recently applied for a patent for this technology. It seems quite complicated and possibly too expensive to implement, but could be a good interim solution until the in-display camera has been thoroughly developed. 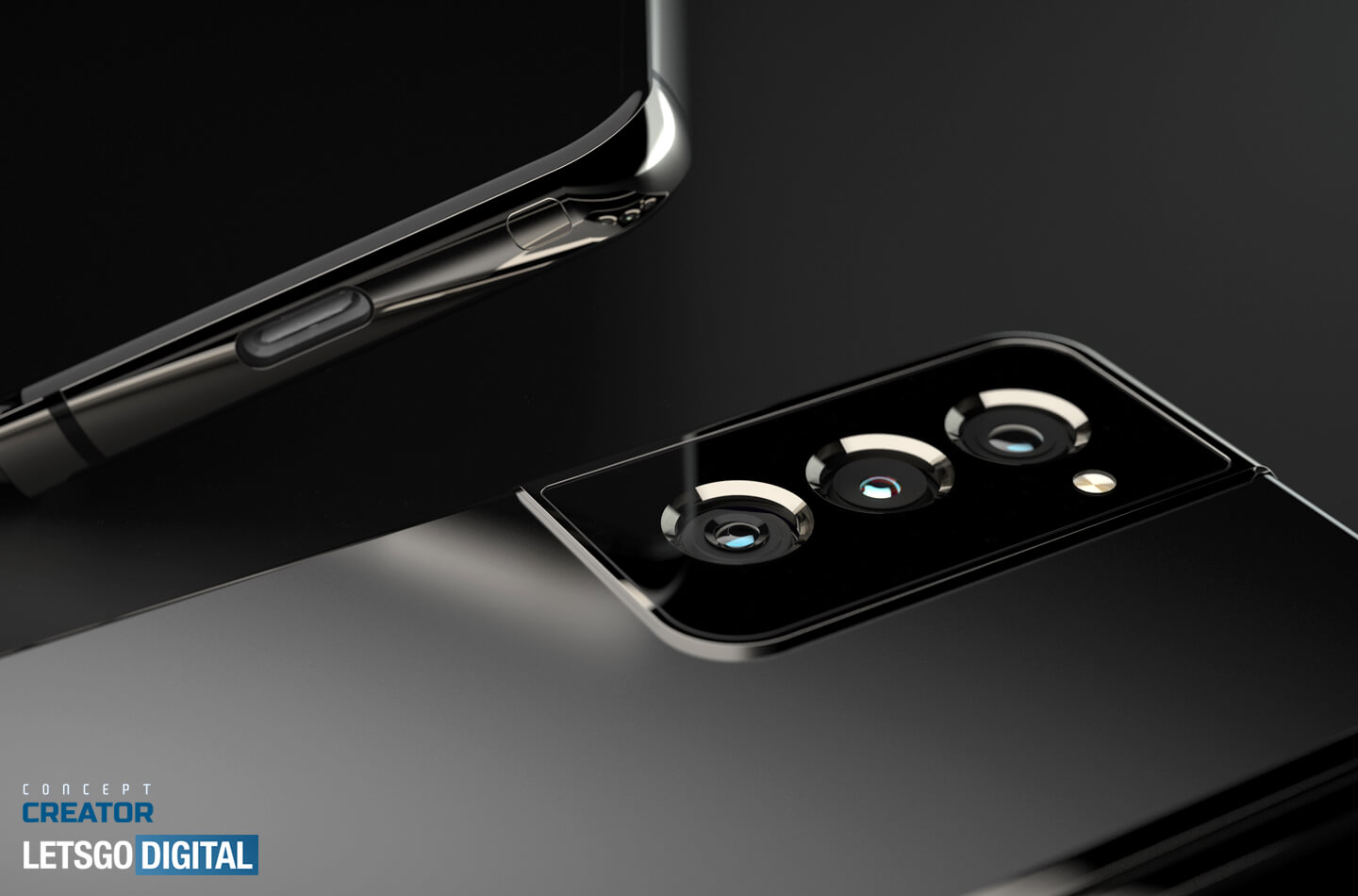 In any case you may assume that Samsung will equip the new top model with the most powerful hardware and latest software. Most likely the Qualcomm Snapdragon 888 / Exynos 2100 and the Android 11 OS in combination with the One UI 3.1 user interface. Last year, Samsung opted for 12GB RAM and 256GB or 512GB storage memory. It is certainly not inconceivable that the Galaxy Z Fold 3 comes with the same memory configuration. In addition, the new Fold will of course offer 5G support.

A lot is still unclear about the size of the screen. Some claim that the new Fold will have a smaller cover screen. Personally I expect that this will only be the case for the Galaxy Z Fold Lite – also known as the Galaxy Z Fold FE (Fan Edition).

The original Galaxy Fold was equipped with a 4.6-inch cover display, with the Z Fold 2 the screen size was enlarged to a whopping 6.2-inch. In addition, the flexible display has been increased to 7.6”. This QXGA+ screen also offers support for the high 120 Hertz refresh rate. Apart from the camera, we expect to see minimal design upgrades on the Samsung Z Fold 3. After all, its predecessor has already been radically renewed. The display resolution of the front screen may be increased to Full HD, instead of HD. 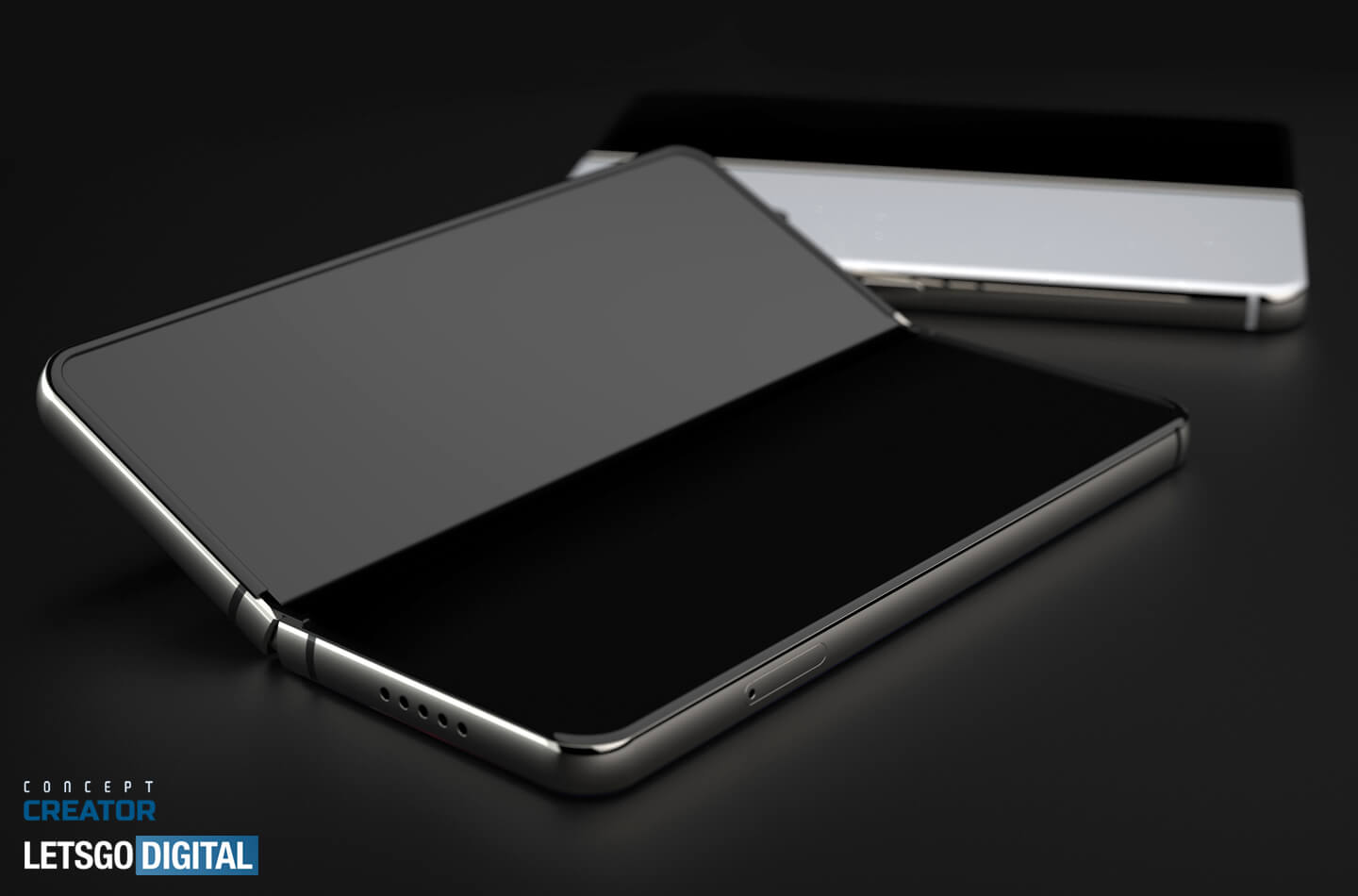 In addition, Samsung will most likely introduce a new generation of Ultra Thin Glass. The first Fold used a polymer plastic display, which can scratch relatively easily. The Z Flip and Z Fold 2 use an ultra-thin layer of glass, which is significantly more scratch resistant.

Samsung has probably further refined the Ultra Thin Glass technology in the meantime, to use in the Z Fold 3 5G. By using thicker glass, it is also easier to make the flexible screen compatible with the S Pen. After all, regular smartphone displays also have a thicker screen, which is less likely to be damaged by a stylus pen.

Another essential point of foldable smartphones is the hinge. A properly functioning hinge definitely benefits the user experience. Samsung may see an opportunity to further improve the hinge or to provide it with new functionalities, such as a light indicator.

With the Z Fold 2, the Hide Away Hinge is equipped with a new type of bristle system, to prevent dust, sand and dirt from accumulating in the hinge mechanism. A unique and well-functioning invention, which we also expect to see in the new model. Samsung may also see an opportunity to make the Galaxy Z Fold waterproof this time.

What is immediately noticeable when you hold the Fold 2 for the first time is the weight. With a weight of 282 grams, the device is quite heavy, especially if you hold the phone in your hands for quite some time. This can definitely be an important point in your consideration of buying such a phone. Of course, 282 grams is only a number, so for comparison, the Galaxy S20+ (with 6.7 ”screen) weighs only 186 grams – that’s over 65% lighter. The difference is clearly noticeable in daily use. Hopefully, Samsung sees an opportunity to lower the weight of the Galaxy Z Fold 3.

In terms of battery life, the Fold 2 was equipped with a 4,500 mAh battery. This provides an acceptable battery life of approx. 10 hours on average. Perhaps the battery capacity will improve slightly, however, the new chipset is also more energy efficient. In addition, we would like to see that the device does not become heavier in any case – which can make it difficult to use an extra-large battery. 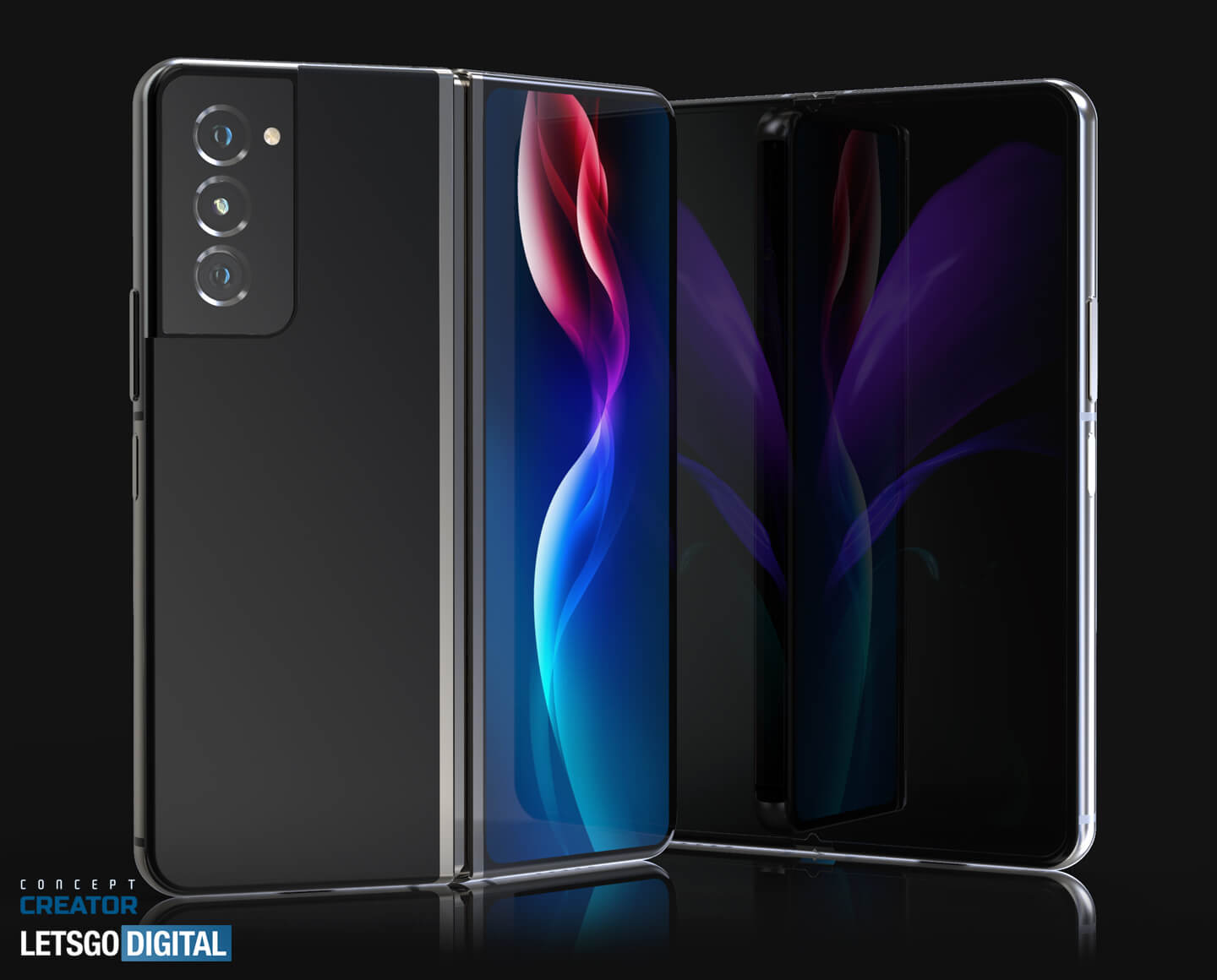 When to expect the Z Fold 3 5G and what will be the price?

The first price indications point to a suggested retail price that will be the same as that of the Samsung Z Fold 2. It was expected that the price of foldable smartphones would become cheaper over time, however, Samsung seems to opt for a different strategy. By releasing additional models that are marketed more cheaply, Samsung can still introduce a larger target group to the new world of foldable smartphones.

With the Z Fold 3, the company will be able show the most advanced technology available, while the Z Fold 2 FE should be accessible to a wider audience. A cheap version of the Galaxy Z Flip is also expected in the long run. It is currently unknown how these devices will differ from their more expensive brothers.