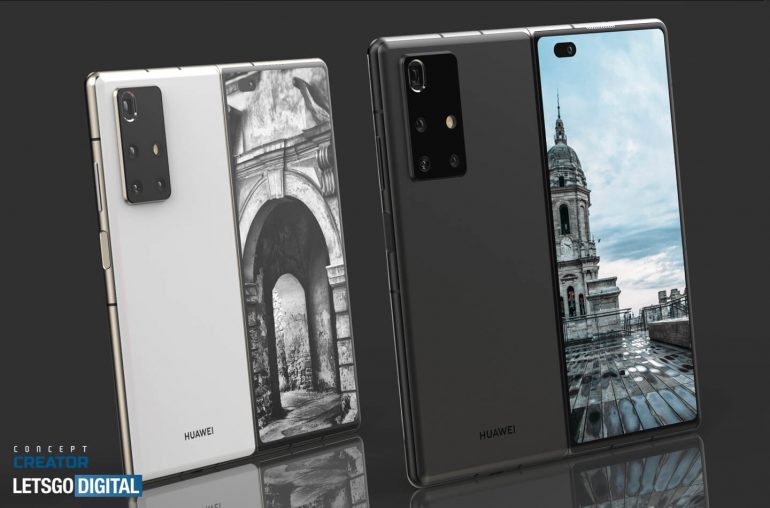 The Huawei Mate X2 will likely be a foldable smartphone with an inward flexible display and a large cover screen with a dual hole-punch selfie camera.

Huawei will soon announce two new smartphones within its high-end Mate series: the Huawei Mate 40 and Mate 40 Pro – as counterparts to the recently launched Samsung Galaxy Note 20 and Note 20 Ultra. The question remains whether we can also expect a folding phone from Huawei this year. Samsung recently launched the Galaxy Z Fold 2, as the third foldable phone of the Koreans. Although Huawei is also working on a completely redesigned foldable smartphone, the trade sanctions from the US seems to have caused a serious delay in the development.

Huawei is going through very turbulent times. The US trade ban continues and has disastrous consequences for the Chinese manufacturer and its suppliers. In addition, COVID-19 has also done little good for the technology sector. 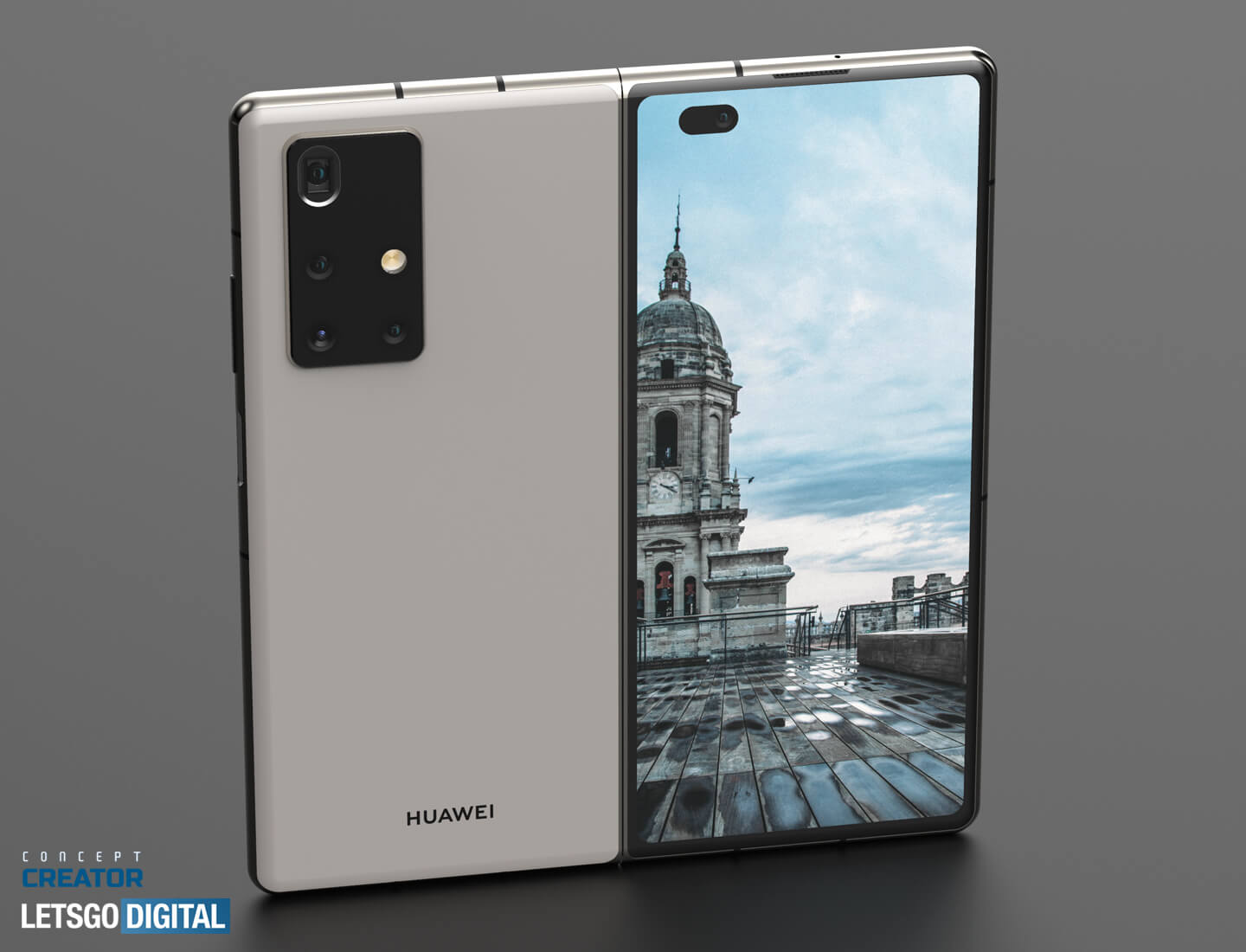 All in all, it is still unclear when Huawei will present its next foldable smartphone. Nevertheless, over time, a lot of information has become known about the Huawei Mate X2 (code name “Teton”).

Last month, LetsGoDigital managed to uncover a patent for a Huawei Mate foldable smartphone that shows a lot of similarities with the Galaxy Z Fold 2. The flexible screen folds inwards and an extra cover display is placed on the outside – which comes in handy when you want to use the phone in a folded situation.

In terms of design, this device seems to be the perfect mix between the current flagship devices from Huawei and the Galaxy Z Fold 2. In that respect, it is certainly not inconceivable that this is indeed the model that Huawei is currently working on.

To better visualize this foldable smartphone, the Dutch 3D graphic designer Jermaine Smit, aka Concept Creator, made a series of product renders based on the patent. Naturally, Jermaine has also made a high-profile video animation in which the alleged Huawei Mate X2 can be seen from all sides

The cover screen is new, this display is functional when you use the phone in folded position. Some believe that the Mate X2’s cover screen only measures 4.5 inches. However, the Galaxy Fold’s 4.6″ cover display was perceived as too small by many users. Therefore there is a good chance that Huawei will follow the same path as Samsung did with the Z Fold 2 by applying a larger cover screen – as can also be seen on the patent images.

The cover screen is equipped with a dual selfie camera. A similar dual hole-punch camera can be found in the Huawei P40 series launched earlier this year and will most likely also be applied to the Mate 40 series expected later this month. The fingerprint sensor is implemented on the side, similar to the Z Fold 2.

The rear camera setup is very similar to that of the P40 Pro Plus – although the telephoto camera has been moved up. The thickness of the device is also noticeable. At the top – where the camera system is located – the smartphone is designed significantly thicker than at the bottom. The question is what this will do to the hand position – after all, the center of gravity will be at the top.

Remarkably, no camera is visible when you use the smartphone in a completely open state. Where Samsung has opted to implement a punch-hole camera in the right part of the flexible screen of the Z Fold 2, Huawei does not seem to add a separate camera on the inside.

This is also not very necessary, after all, a front camera is available and there are also more than enough cameras built in at the rear. However, if you want to make video calls, you have to rely on the smaller cover display. As a result, it is not possible, as with Samsung’s Flex mode, to make a video call and to run another applications at the same time – such as your email or the web browser. 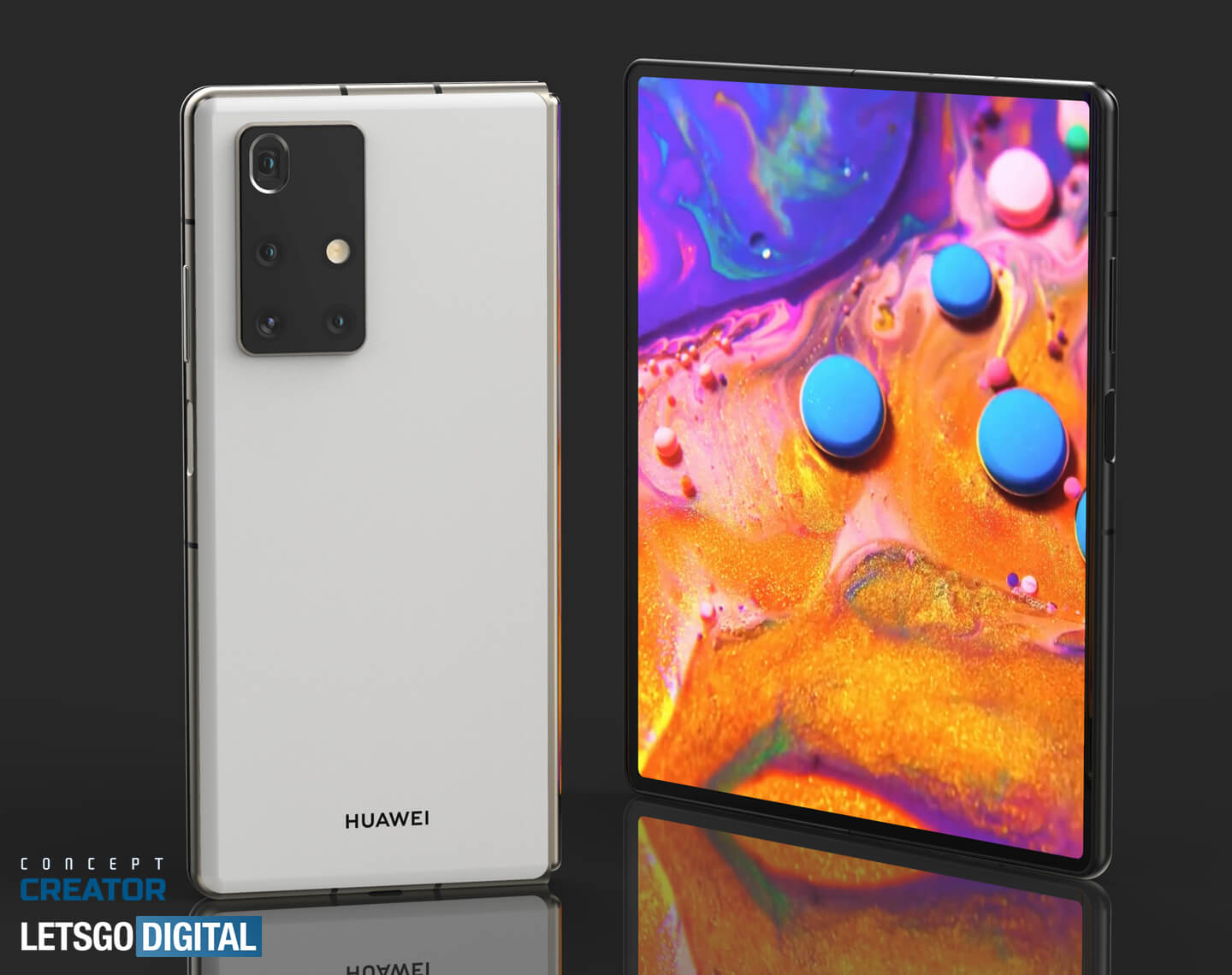 As for the size of the flexible display, if we are to believe the rumors, the new Huawei Mate foldable smartphone will get an 8.03-inch inward-folding screen with a 2480 x 2220 resolution. This means that the Huawei device will be slightly larger than the 7.6-inch flexible screen of the Z Fold 2. A nice detail; the bendable display of the Huawei Mate X2 is manufactured by Samsung and BOE. This makes it the first folding phone with Samsung display technology, which will not be released by Samsung themselves.

Just like the Galaxy Z Fold 2, the Mate X2 will also be equipped with a 120Hz flexible display. This high refresh rate contributes to a better scrolling experience. It also comes in handy while gaming or watching a movie. We also expect to see this function in the Mate 40. The top models launched earlier this year, the P40 Pro and P40 Pro Plus, do not have a 120Hz screen, instead Huawei opted for a 90Hz display. At the time, the explanation for this was given that 120Hz costs too much energy consumption.

Unlike Samsung, Huawei will not use UTG (Ultra Thin Glass), instead opting for the less scratch-resistant CPI (colorless polyimide) – according to display market analyst Ross Young. This means Huawei will use a plastic flexible screen, instead of ultra-thin bendable glass – as Samsung has used for the Galaxy Z Flip and Z Fold 2.

Last month, an unknown Huawei smartphone with model number TET-NX9 passed the WiFi 6 inspection, after which the corresponding certificate was issued. There is speculation online that this model number belongs to the expected Mate X2. It also became clear from the certification document that this smartphone will run on the EMUI 11 OS, which is based on Android 10. In addition, the device will be equipped with a HiSilicon Hi1105 chipset with support for 8 × 8 MIMO technology. This modem can also be found in the P40 series.

Normally, such a certification indicates that the launch is imminent, but whether we can count on it this time remains unclear. It does tie in with earlier news, which stated that the display production of the Mate X2 would start in the third quarter of 2020. Type number TET-NX9 also received the Bluetooth 5.1 certificate earlier this year.

Furthermore, many assume that the new Mate foldable smartphone will be powered by a Kirin 9000 series processor. However, due to the ongoing problems with the US, Huawei run into problems when it comes to the number of available chips – which would have caused a delay in the launch. In any case, once the Mate X2 will arrive, it will offer 5G support for sure – after all, the existing Mate X and Mate Xs are also both 5G phones.

All in all, quite some information is already known about the new foldable smartphone from Huawei. There is still a lack of clarity about the name however. Since it will be a completely redesigned smartphone, it is certainly not inconceivable that Huawei chooses for a different naming than ´Mate X2´. Just like Samsung uses the name Flip for its clamshell phones and the name Fold for the devices that expand into a tablet. Anyway, the new folding device will probably be placed within the Mate line-up. It seems likely that Huawei’s new foldable phone will be presented in February 2021 – exactly two years after the release of the Mate X.

Note to editors: Thanks to Jermaine Smit (aka Concept Creator) for creating these detailed 3D renders of the Huawei Mate X2. The images are copyright protected and licensed to LetsGoDigital. If you want to use the product renders on your own website please include a clickable source link into your publication. Thank you very much for understanding.