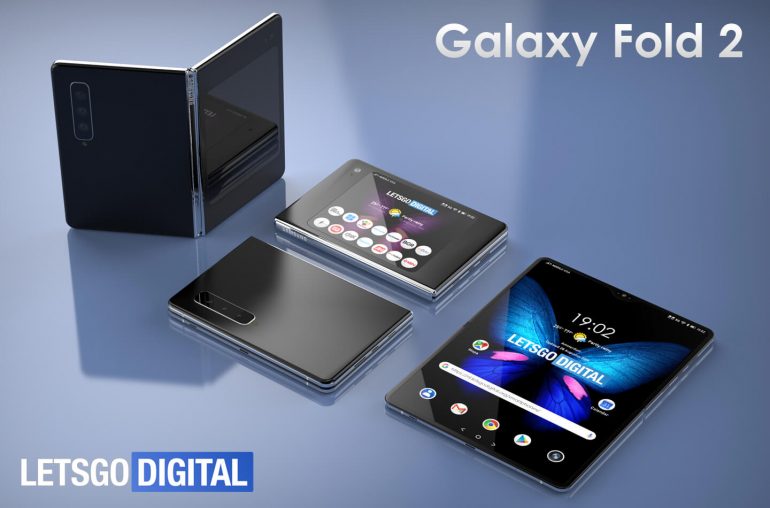 Exclusive: New Samsung foldable phones have many similarities with the Galaxy Fold. One folds vertically, the other horizontally. Are these the 2020 models?

At the beginning of this year the Samsung Galaxy Fold was proudly presented as the first foldable smartphone from the Korean manufacturer. Unfortunately, the launch does not go very smoothly, after all, you can still not buy the Galaxy Fold. The folding phone will be re-released in September 2019. In the meantime, however, there have been several rumors about Samsung intending to release a foldable phone again despite the setbacks with the Fold.

Several times, there has been talk about a model that you can fold in a different way, namely horizontally instead of vertically. In addition, it seems likely that Samsung will also develop a regular successor to the Galaxy Fold.

Over time, LetsGoDigital has come across various Samsung patents for a wide variety of foldable phone designs. This time, however, we are reporting on a design that shows a lot of similarities with the already introduced foldable phone from Samsung. It could very well be his successor; the Samsung Galaxy Fold 2. 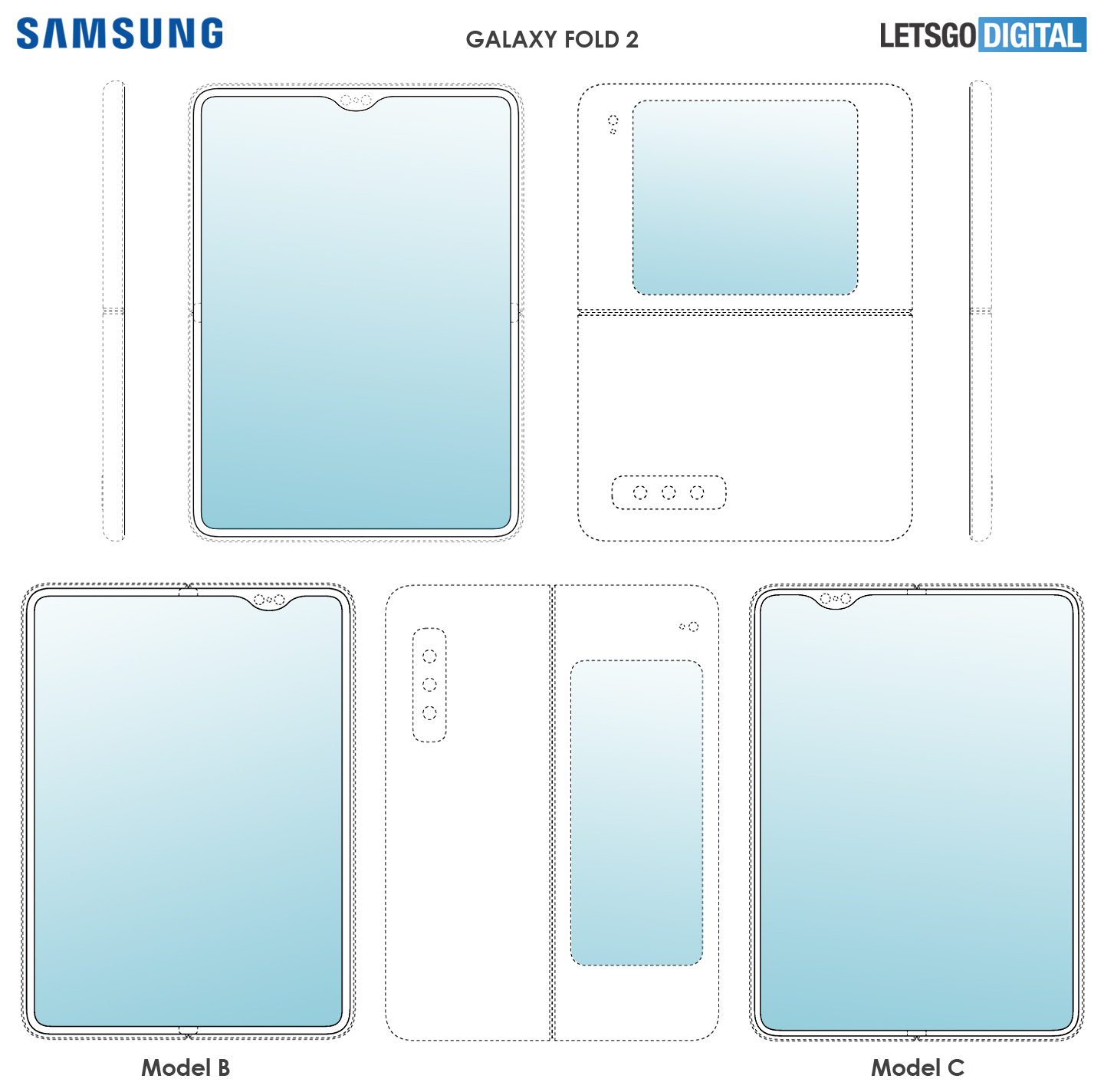 In total three patents have been published. At first sight, these foldable phones show many similarities. However, the placement of the hinge in one of the three models is placed horizontally, instead of vertically. When folded, you have a short, wide device in your hands.

To get a better idea of ​​this new type of foldable phone, LetsGoDigital has designed a series of product renders based on the patent sketches. 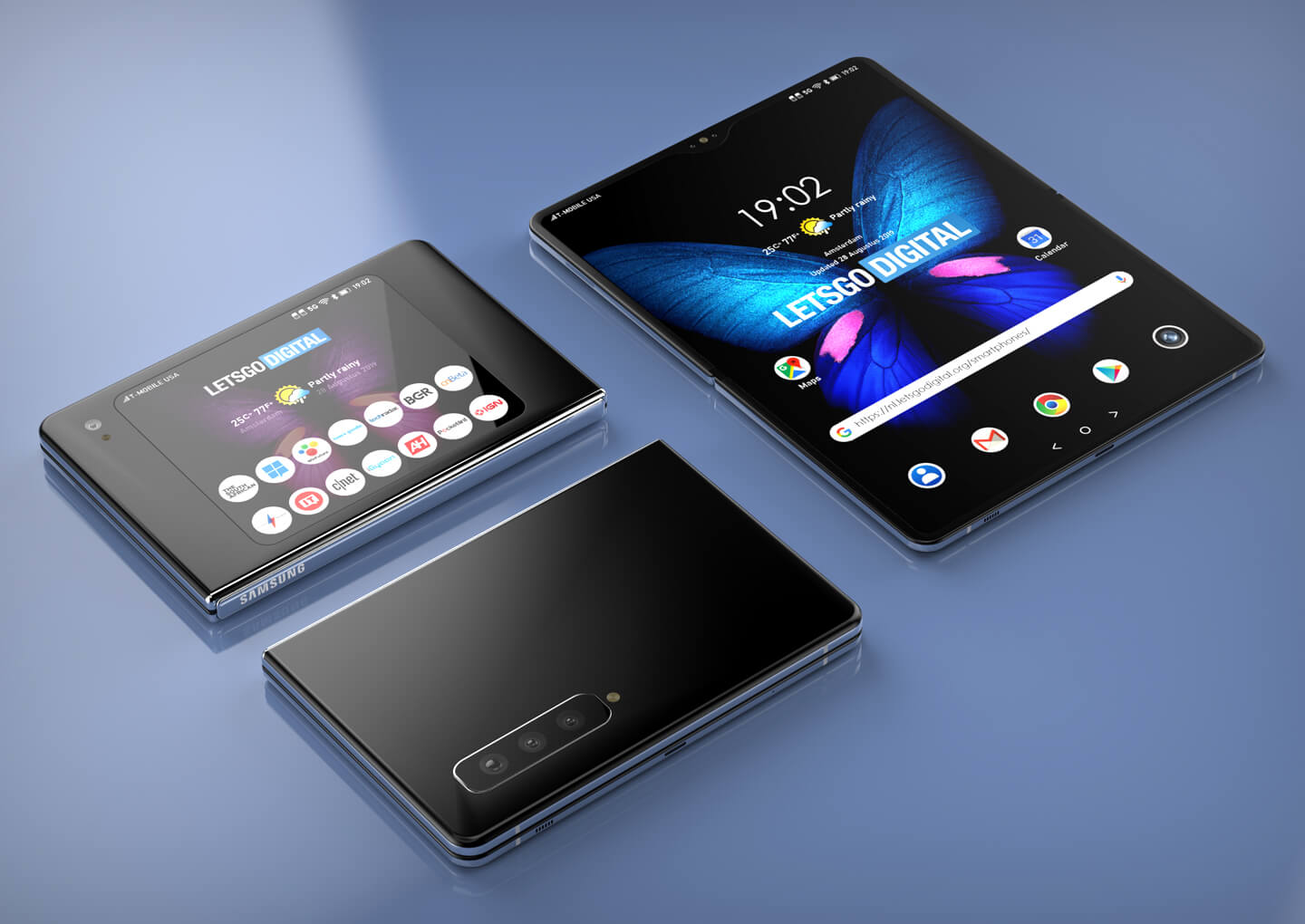 Samsung foldable phones: one folds vertically, the other horizontally

Normally there is a significantly longer time between applying for a patent and the actual publication date. In general this takes several months, however, these patents were published only 12 days after the application date. Have these patents been speeded up at the request of Samsung? It seems plausible.

We start with the patent that shows the most similarities with Samsung’s current foldable smartphone (Model B). Seven sketches are included. Just like the Galaxy Fold, this device has a modest front screen, with large bezels on both the top and bottom. On the back we see a triple camera, just like Samsung’s current folding phone.

The differences become clear when you open the smartphone. Once unfolded you have a large tablet format screen at your disposal. The enormous notch of the current Fold, however, has made way for a much more modest notch, which still contains two cameras.

This notch is placed either at the top right of the screen – as is currently the case – or at the top left (Model C). This is the only difference between these two patents. 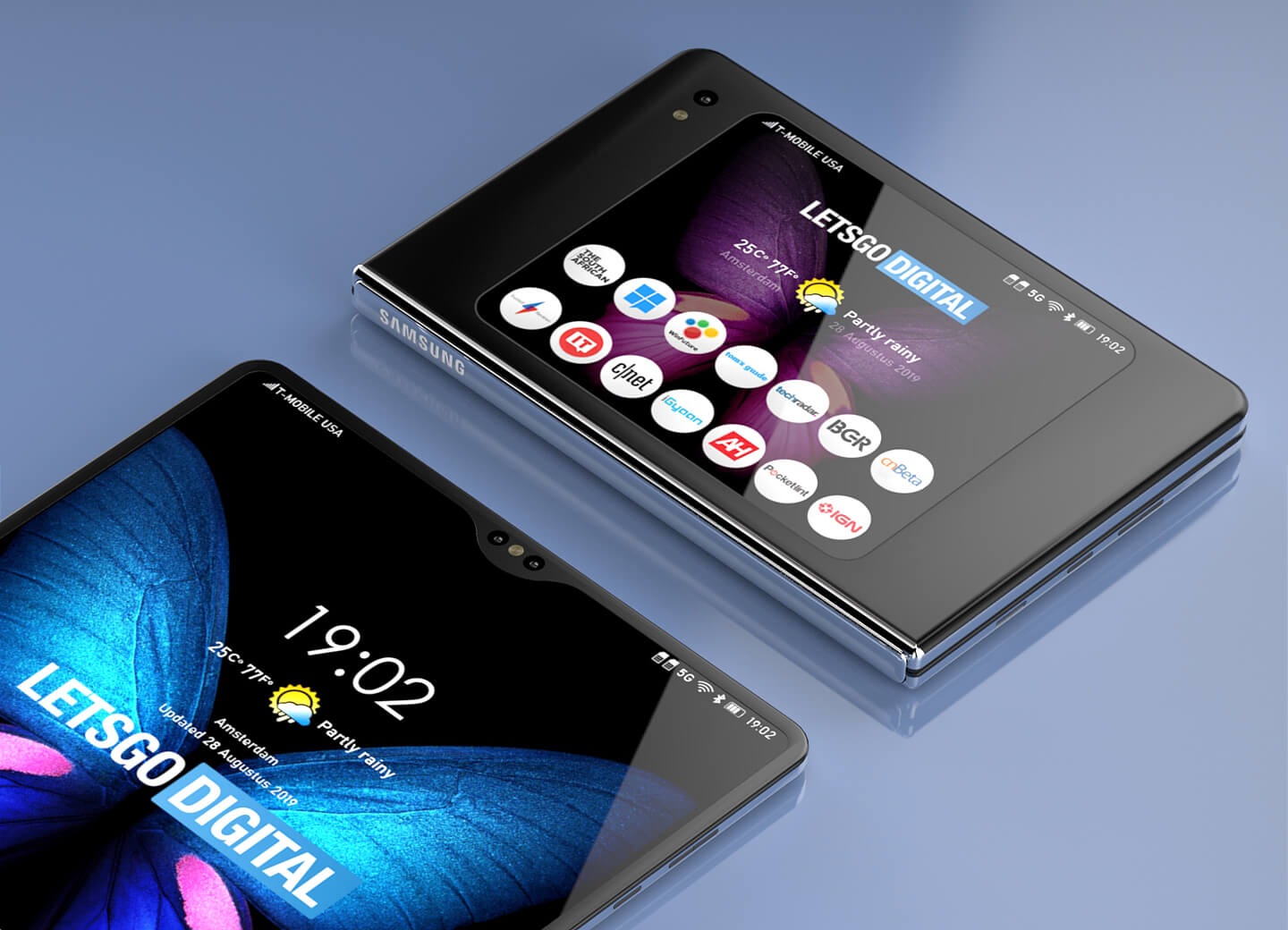 The third patent (on which our 3D renders are based) shows a foldable smartphone that has a similar screen when unfolded like the other two models. The notch of this device is positioned exactly in the middle. The folding line of this phone is not placed vertically, but horizontally.

When folded, you have a completely different type of device in your hands. Not an elongated, narrow phone, but a short, wide device – like a PDA was often designed in the past. The front screen of this model also has a different format than the other two devices.

This Samsung smartphone seems to have just as many cameras as the Fold; 6 in total. The back of this foldable phone shows a triple camera, a double camera is incorporated in the notch and finally we see a single camera on the front. 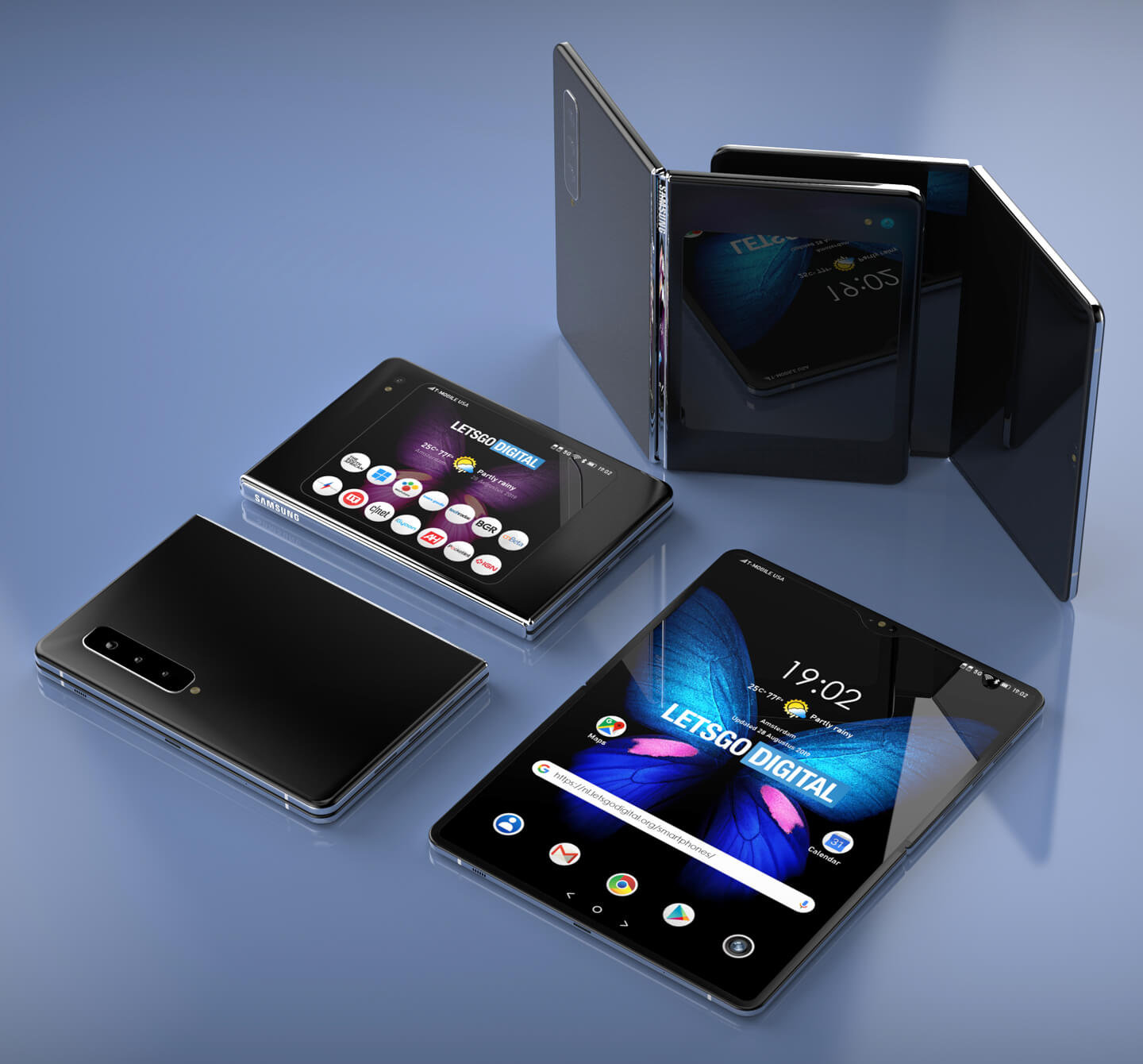 
Last month, Digitimes published an article stating that the 2nd generation of foldable smartphones from Samsung are currently being developed. The Korean manufacturer is also planning to release a model that can be folded horizontally. This device would have a 6.7-inch flexible screen. It is quite possible that this device is similar to the one Samsung has recently patented. After all, this model would perfectly fit the current Galaxy Fold portfolio.

It is as yet unclear when Samsung wants to release its 2nd Gen foldable phones. IFA 2019 starts next week, hopefully the new release date of the Galaxy Fold will then finally be announced. Chances are that we will have to wait until the beginning of 2020 before new foldable devices are introduced by Samsung, these models are likely to be exhibited at MWC 2020.

It seems obvious that the Samsung Galaxy Fold 2 will also be compatible with the fast 5G network. This is also the case with the Huawei Mate X. The current Fold only offers 4G LTE support. However, since then Samsung released several 5G smartphones, including the Galaxy S10 5G, the Galaxy Note 10 and the Note 10+. It seems likely that Samsung will also release a 5G model of the Fold 2. 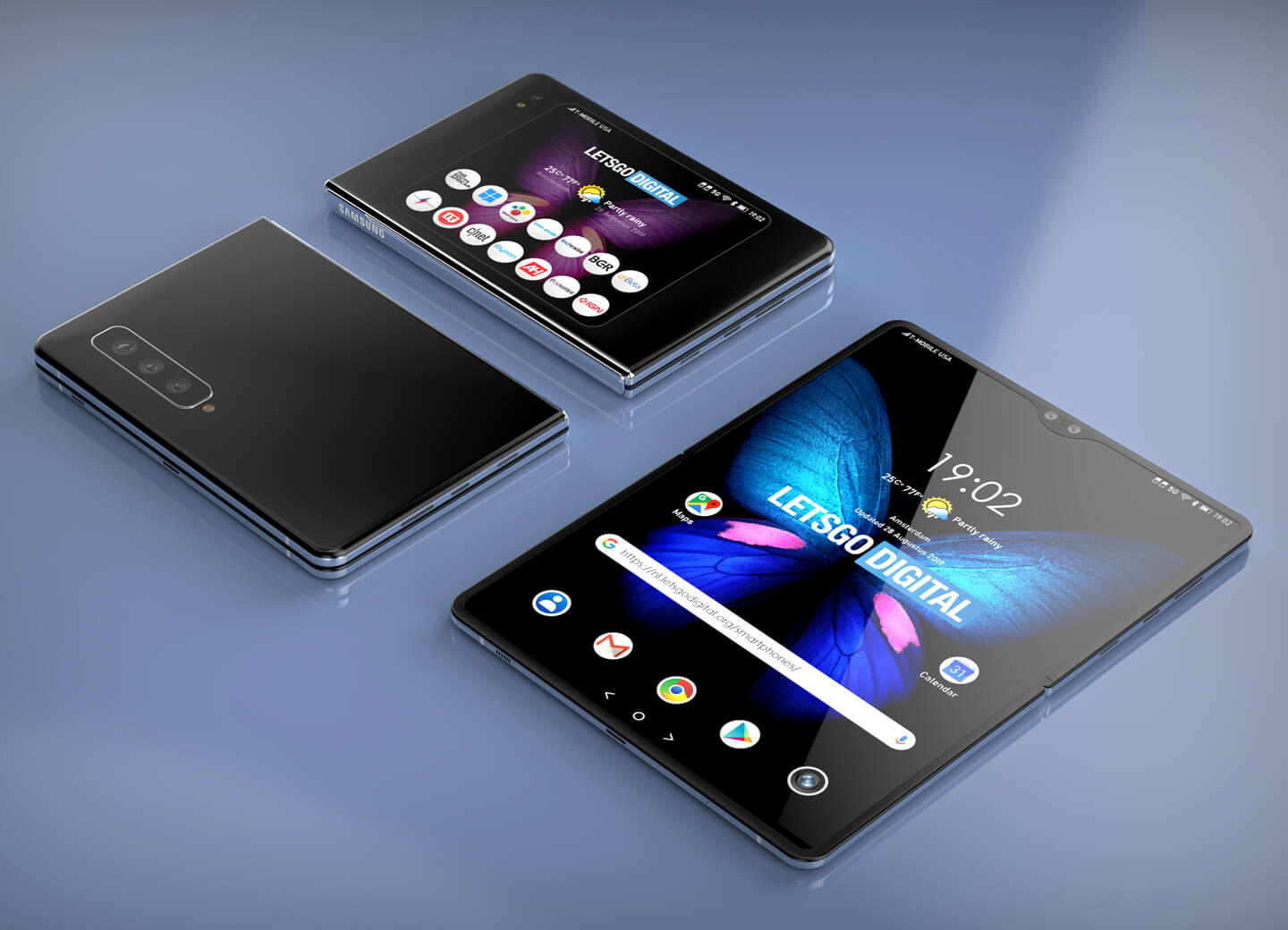 The current Fold has a 4.6-inch HD+ front-screen. Once unfolded, you have a 7.3-inch flexible screen at your disposal. Shortly before the release it was decided to postpone the launch. This happened after several review copies showed defects. In the meantime, Samsung has made various adjustments, through a press release all improvements of the Samsung Galaxy Fold were explained.

At the same time, it was announced that the updated version will be launched in September this year in a limited number of countries. Although this was announced more than a month ago, no further details have yet been released. It is still unknown whether the price has changed and in which countries the device will be released. Initially, the device would launch in four different colors for a suggested retail price of € 2,020.

In the meantime Huawei has announced that the release of the Mate X will be suspended again. This device was also expected to arrive in September, however, it has now been postponed to “somewhere between September and November 2019”.

In addition, another foldable smartphone is expected soon, the Motorola RAZR. This foldable smartphone has also been talked about for a long time, but it looks like the introduction is now really near. Earlier this month, LetsGoDigital reported exclusively that this device is also coming to Europe. This device will be released for € 1500 at the end of this year or early 2020.

IFA 2019 will start on Friday 6 September and will last until Wednesday 11 September. One day before the exhibition starts, Samsung has scheduled a press conference at 11:00 AM, then the new portfolio of electronics products will be announced, including the new 8K QLED TV line-up. Undoubtedly the Galaxy Fold will also be discussed during this exhibition. 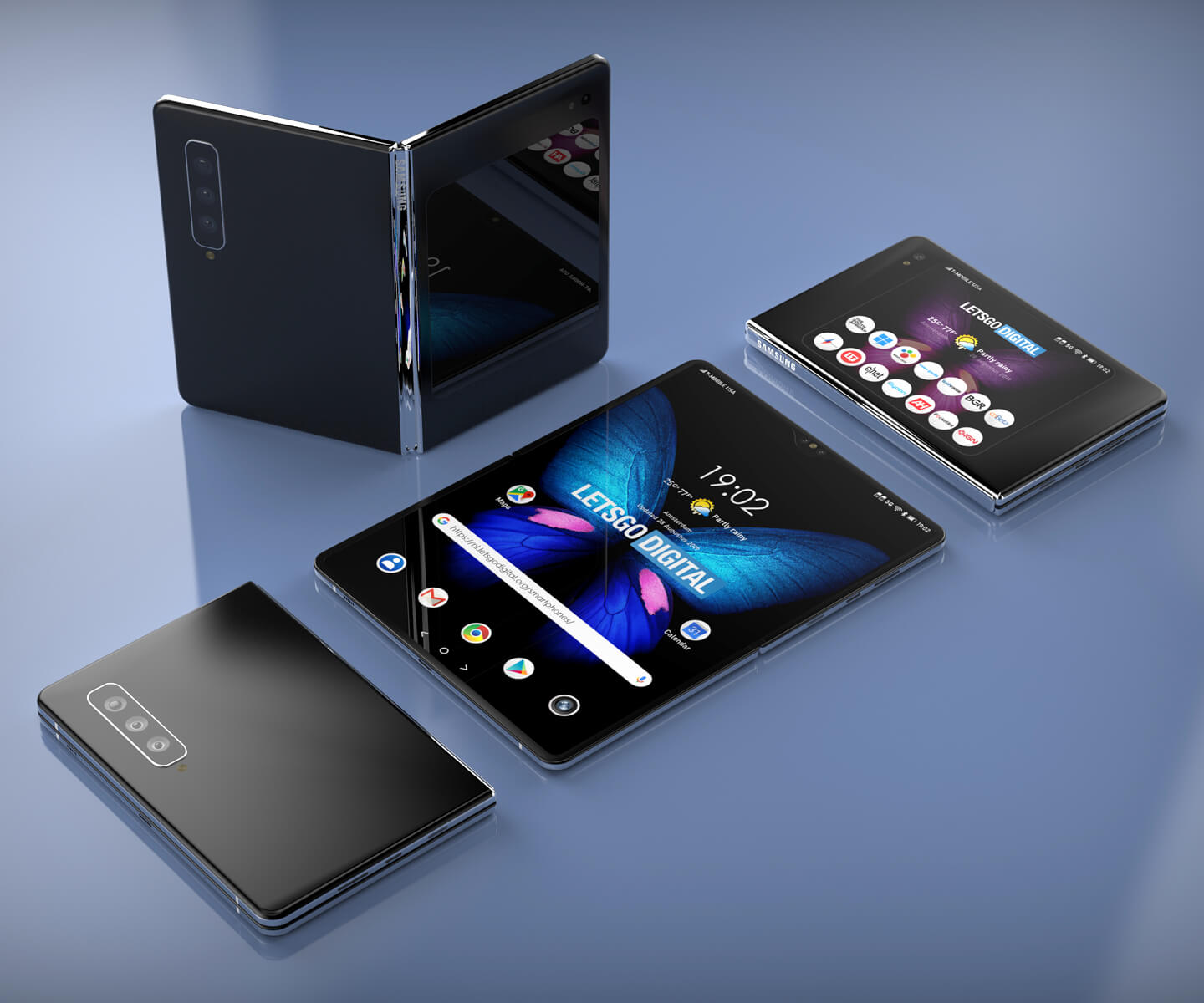 Note to editors: The 3D renders presented in this article are copyright protected and designed by LetsGoDigital. You can use our artwork for free, as long as you include a clickable source link into your story.  Thank you very much for understanding.