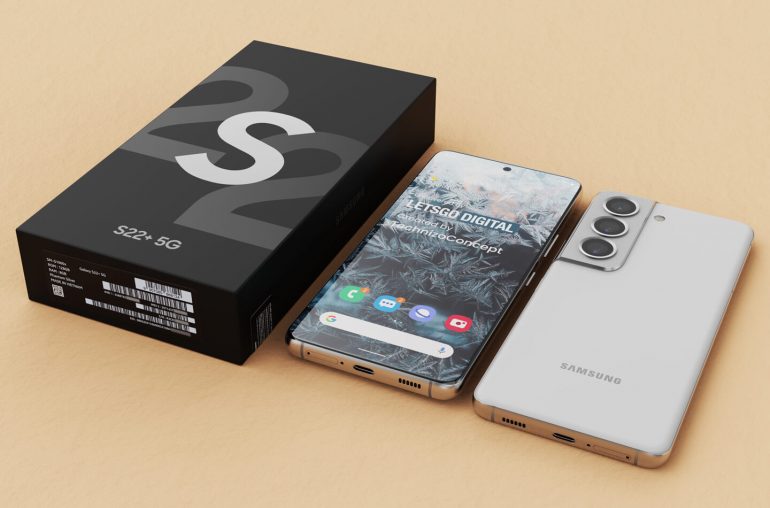 The Samsung Galaxy S22 series is expected at the beginning of 2022. With smaller screen, faster processor and better camera - without Olympus lenses.

At the beginning of 2021 Samsung released three Galaxy S21 smartphone models, a fourth model is expected later this year, the Galaxy S21 FE (Fan Edition). Almost all details of that device are already known, which is why we are looking ahead to the beginning of 2022. The Samsung Galaxy S22 series seems to be on schedule for a late January release. Again, three models are expected. In addition to a basic model, there will be a S22 Plus and S22 Ultra.

A new Galaxy Note is not expected this year. Instead, Samsung has released the Galaxy Z Fold 3 and Galaxy Z Flip 3 foldable smartphones. The S22 will be the next high-end smartphone series that Samsung will announce. 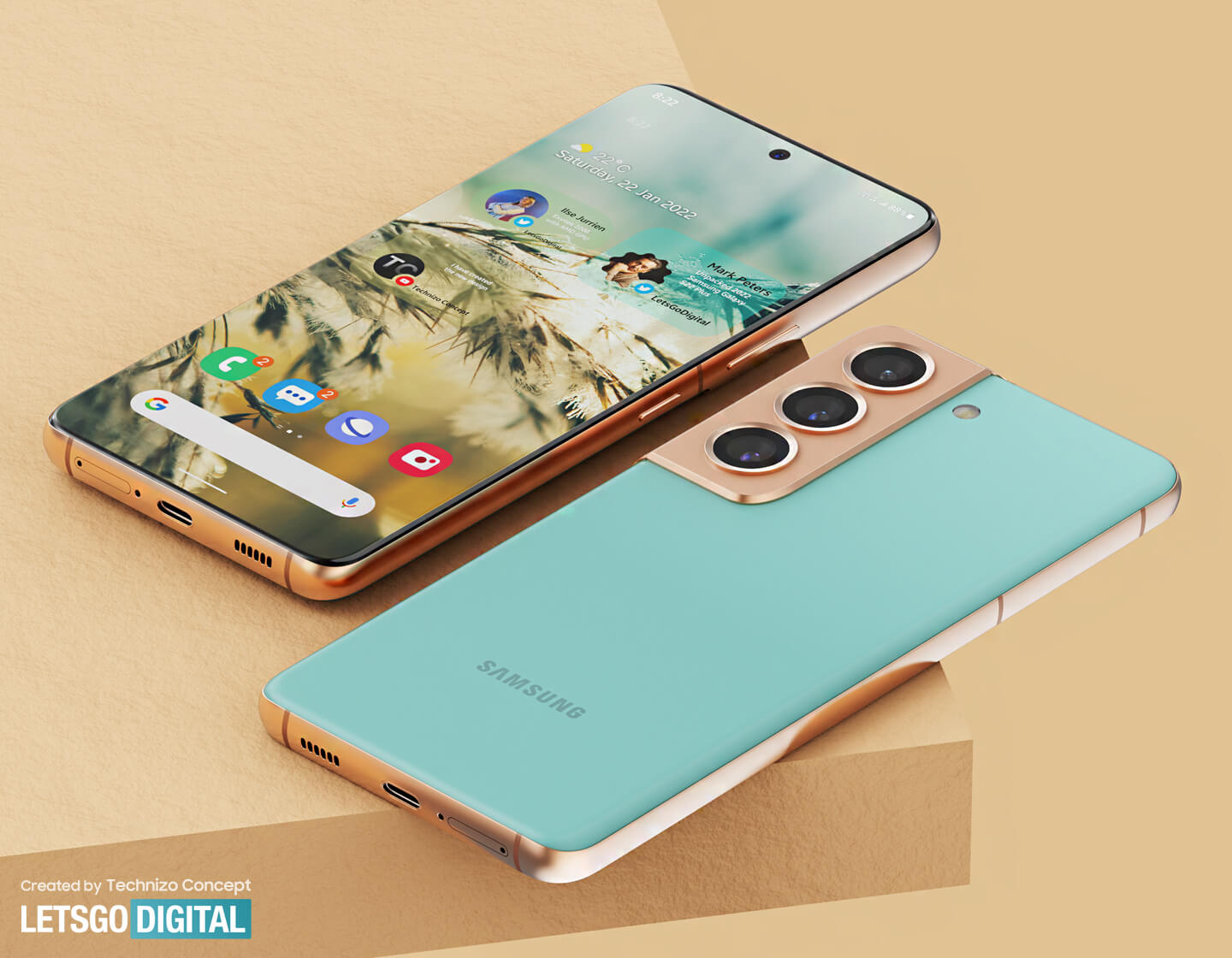 The new S-series 2022 line-up will feature several improvements over its predecessors. Based on all the information available to date, graphic designer Technizo Concept, in collaboration with LetsGoDigital, has designed a series of Samsung Galaxy S22 Plus renders, as well as the video below, to get a first impression of the possible new design – presented in a series of fresh spring colors.

In the past period there have been several rumors about the camera system. Nevertheless, it remains unclear how the camera design will look like. The renders designed by Technizo Concept are inspired by the S21+. It is expected that both the main camera and the telephoto zoom camera will be updated.

The 12-megapixel wide-angle camera will most likely be replaced by the recently announced ISOCELL GN5. This is a 50MP camera sensor with ultra-fast autofocus. This 1/1.57-inch image sensor with 1.0μm pixels will undoubtedly deliver a better image quality than the 12MP wide-angle camera found in the current Plus model.

The 12-megapixel ultra-wide-angle camera will most likely be maintained. In addition, Samsung is expected to equip the Galaxy S22 and S22 Plus with a new telephoto camera. It is probably the same 3x optical zoom camera that can be found in the S21 Ultra. This is a 10MP image sensor.

Although this image sensor has a lower resolution than the 64MP zoom camera used in the S21+, this lens will deliver improved zoom capabilities. The current model offers only 3x Hybrid zoom and 30x digital zoom. The new image sensor will support 3x Optical zoom – without any loss of image quality.

Of course, Samsung will also pay attention to the video functions. The current S-series models allow you to record 4K videos @ 60fps. Filming in 8K @ 24fps is also possible. New features such as Director View, Single Take and 8K Video Snap will most likely also be available in the S22 models. 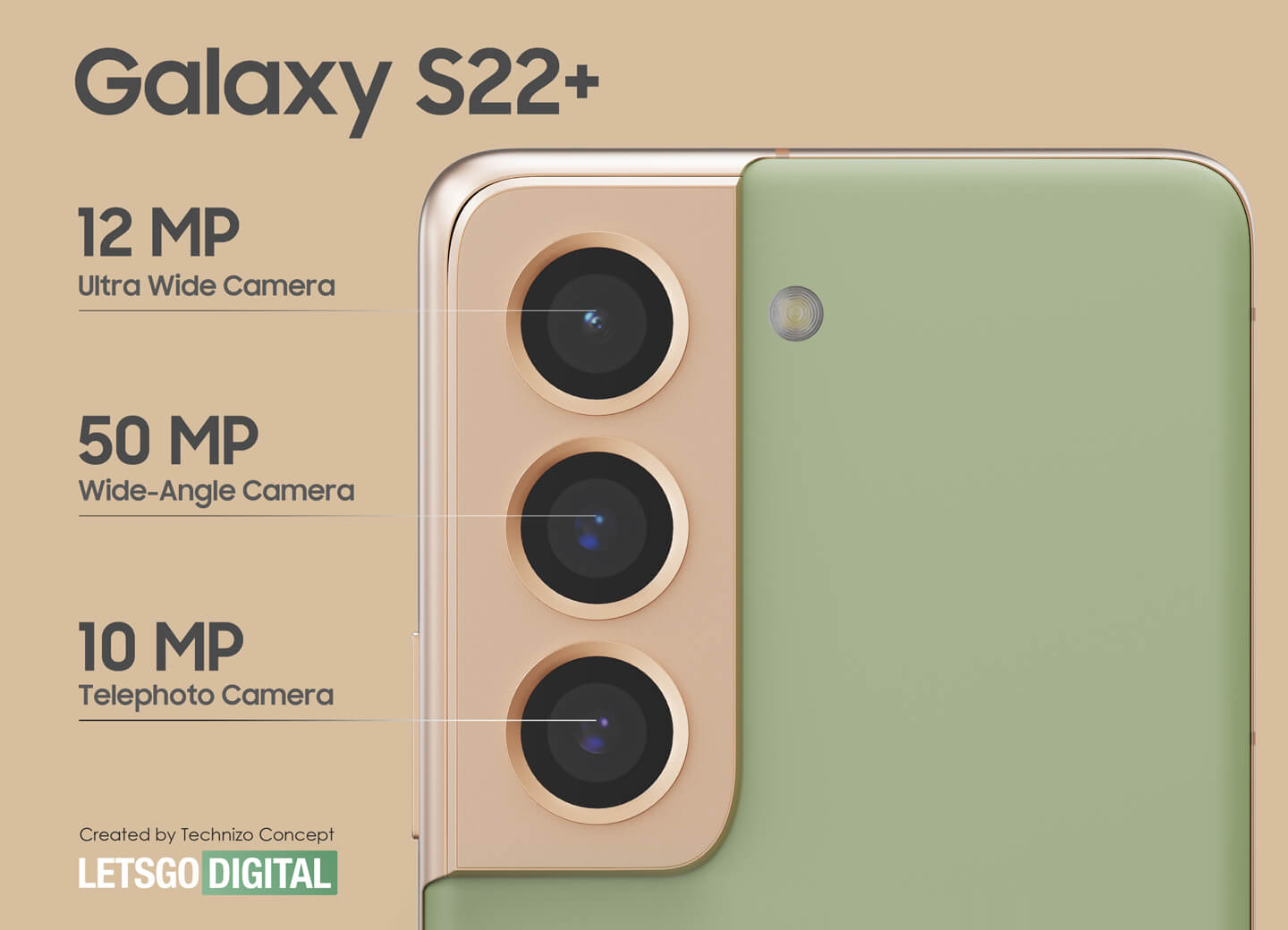 Earlier this year, there was speculation that Samsung started a partnership with the Japanese camera/lens manufacturer Olympus. It was thought the Galaxy S22 series would be the first to get equipped with an Olympus camera. The story sounded credible, especially since several smartphone manufacturers have already started a partnership with a leading camera brand. Think, for example, of OnePlus and Hasselblad.

In the meantime, LetsGoDigital has contacted Olympus / OM Digital Solutions GmbH. A spokesman has told us that there is no collaboration between Olympus and Samsung. It remains unclear to us whether there have been discussions about a possible collaboration in the past. In any case, the camera system of the Samsung S22 series will not be designed in partnership with Olympus.

The confusion may have arisen because the Exynos 2200 chip from Samsung is being designed under code name ‘Olympus’. In addition, at the beginning of this year OM Digital has openly indicated that it will enter into a collaboration with a non-camera manufacturer – details about this are still unknown. Anyway, there is no collaboration between Olympus and Samsung. 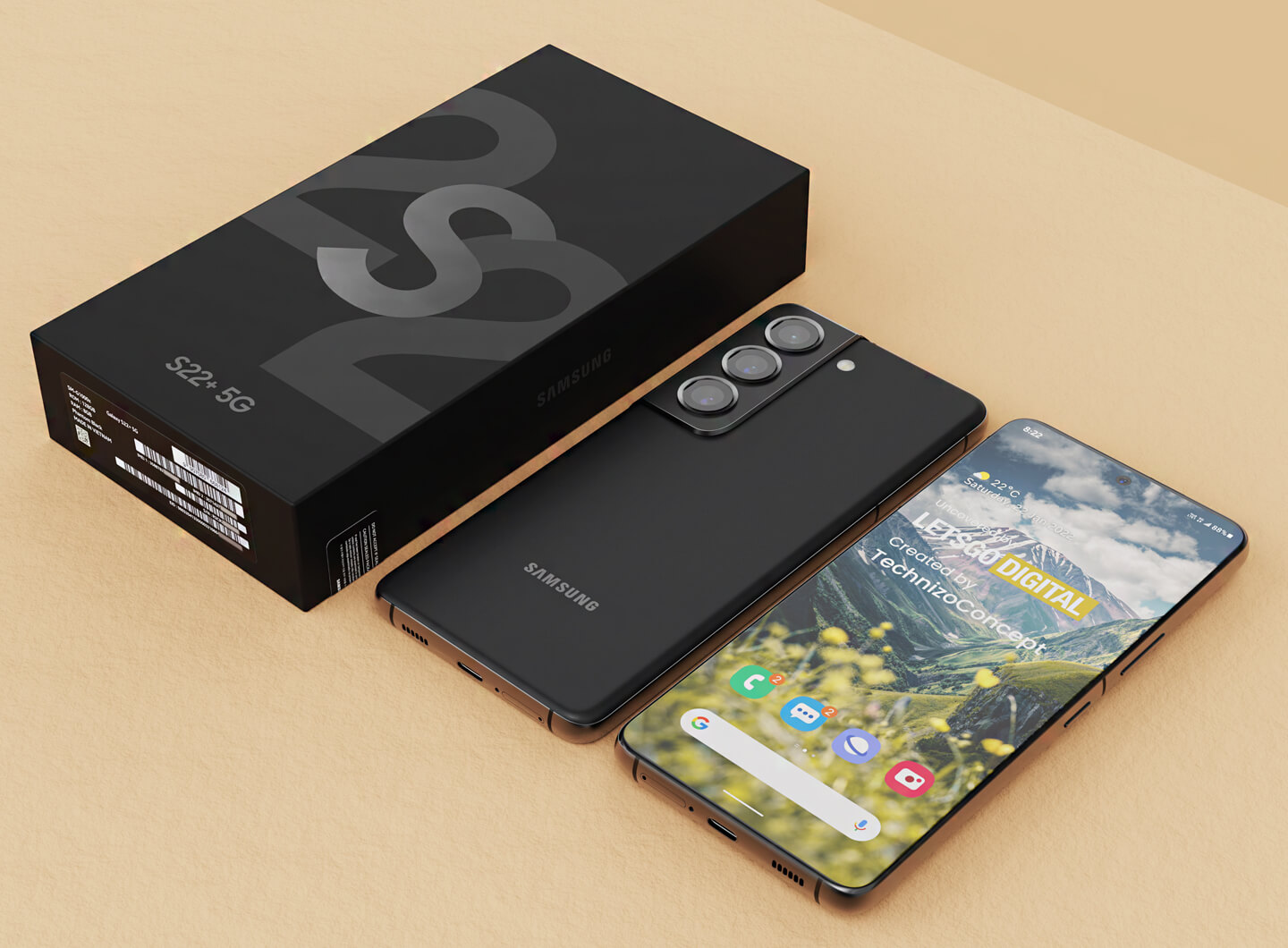 Regarding the screen, the Plus models within the Galaxy S-series are traditionally equipped with a larger display than the base model. Both the S20+ and S21+ come with a 6.7-inch Dynamic AMOLED display. The display resolution has been reduced this year, from QHD+ to Full HD+ resolution.

Presumably, the Galaxy S22 Plus will also feature a Full HD AMOLED screen with 120Hz adaptive refresh rate. It seems the display size will shrink a little. It is believed the Samsung S22 Plus will feature a 6,55-inch display. In addition, Samsung will likely opt for a glasstic back panel – instead of glass, which was used for the S21+.

‘Glasstic’ is plastic that looks like glass. It’s cheaper to produce than a glass back panel, but it is also more scratch-resistant and less fingerprint sensitive. Hopefully, this will also result in a lower starting price for the Samsung Galaxy S22+.

Although Samsung released the Galaxy Z Fold 3 with an under-display camera, the Galaxy S22 series is not expected to feature this new selfie camera technology. The image quality is simply not yet sufficient. This is not such a problem with the Fold, as this foldable comes with a second selfie camera. With the S22, Samsung will likely play safe and integrate a 10MP punch-hole camera again. 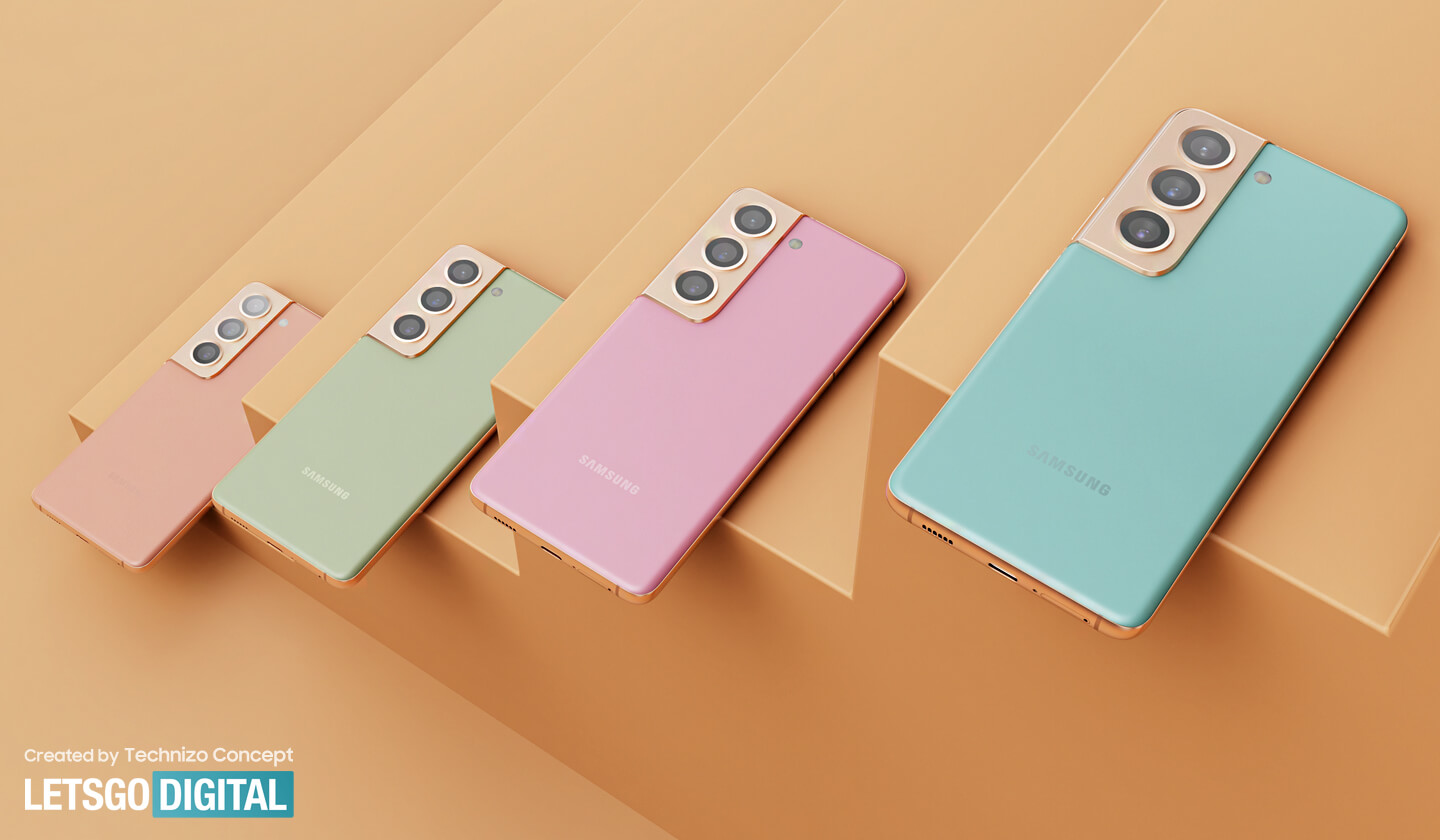 Samsung is expected to make some changes when it comes to the chipset. Regularly Samsung makes use of two chips for its S-series devices – depending on the region. The Samsung Galaxy S22 series is believed to be powered by the Qualcomm Snapdragon 895 / 898 and the Samsung Exynos 2200.

Much is expected of the new Exynos chip, as Samsung will use an AMD Mobile Radeon GPU with RDNA2 for the first time. This chip will also support ray-tracing and variable rate shading – technologies already used in gaming PCs and game consoles such as the Sony PS5 and Xbox Series X.

According to the most recent information, Samsung will use the Exynos 2200 SoC in fewer devices than initially planned. The persistent chip shortages would be the reason for this. Nevertheless, the European models seem to be equipped with the Exynos 2200. In many other markets, including the US, the Qualcomm counterpart will be used.

Last week, Samsung gave a first preview of the new One UI 4 user interface, which is based on Android 12. The current S-series models will probably be provided with an update to Google’s new operating system before the end of 2021.

The Galaxy S22 will be the first Samsung smartphones to run on Android 12 out of the box – in combination with One UI 4. This interface is characterized by numerous new personalization options. 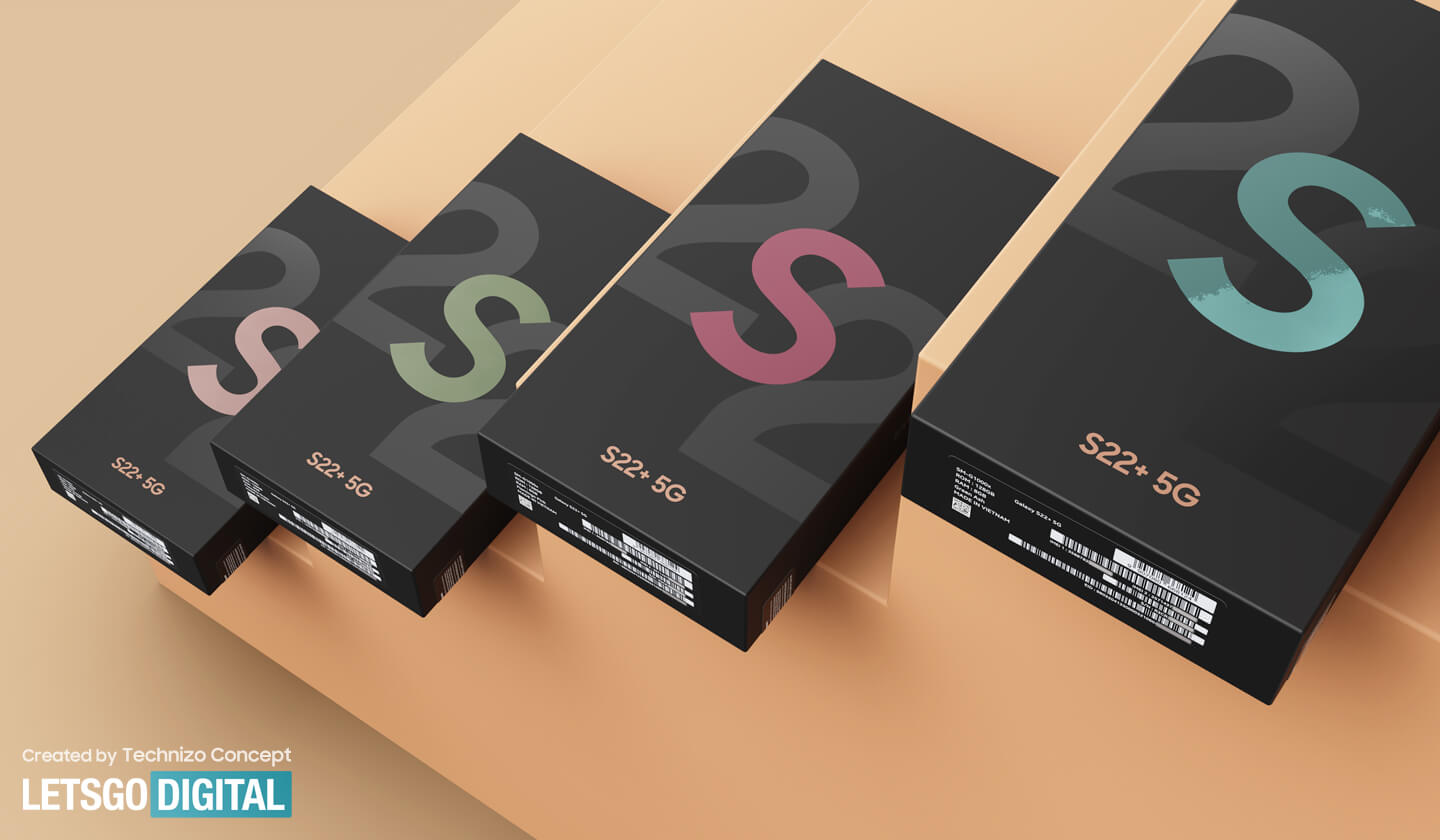 Samsung S22 Plus gets smaller battery

It is believed Samsung will equip the Galaxy S22+ with a smaller display than before, therefore the battery will shrink too. The new model is expected to feature a 4.500 mAh battery, which will likely offer a similar battery life as the 4.800 mAh built-in battery of the S21+.

When it comes to the charging options you may expect some updates. Nevertheless, the rumored 65W charger will not be compatible with any of the devices of the S22 series. Both the Plus and the Ultra model are expected to support 45W charging. The vanilla model will still offer only 25W wired / 15W wireless charging. Just like this year’s S-serie devices, Samsung will not include a charger in the sales box.

Samsung launched the Galaxy S21+ at a suggested retail price of €1.050. If Samsung chooses to provide the new Plus model with a glasstic back panel and a slightly smaller display, it is likely that the price will in any case not increase compared to this year. More details about the new S-series 2022 line-up will undoubtedly be revealed in the coming months. 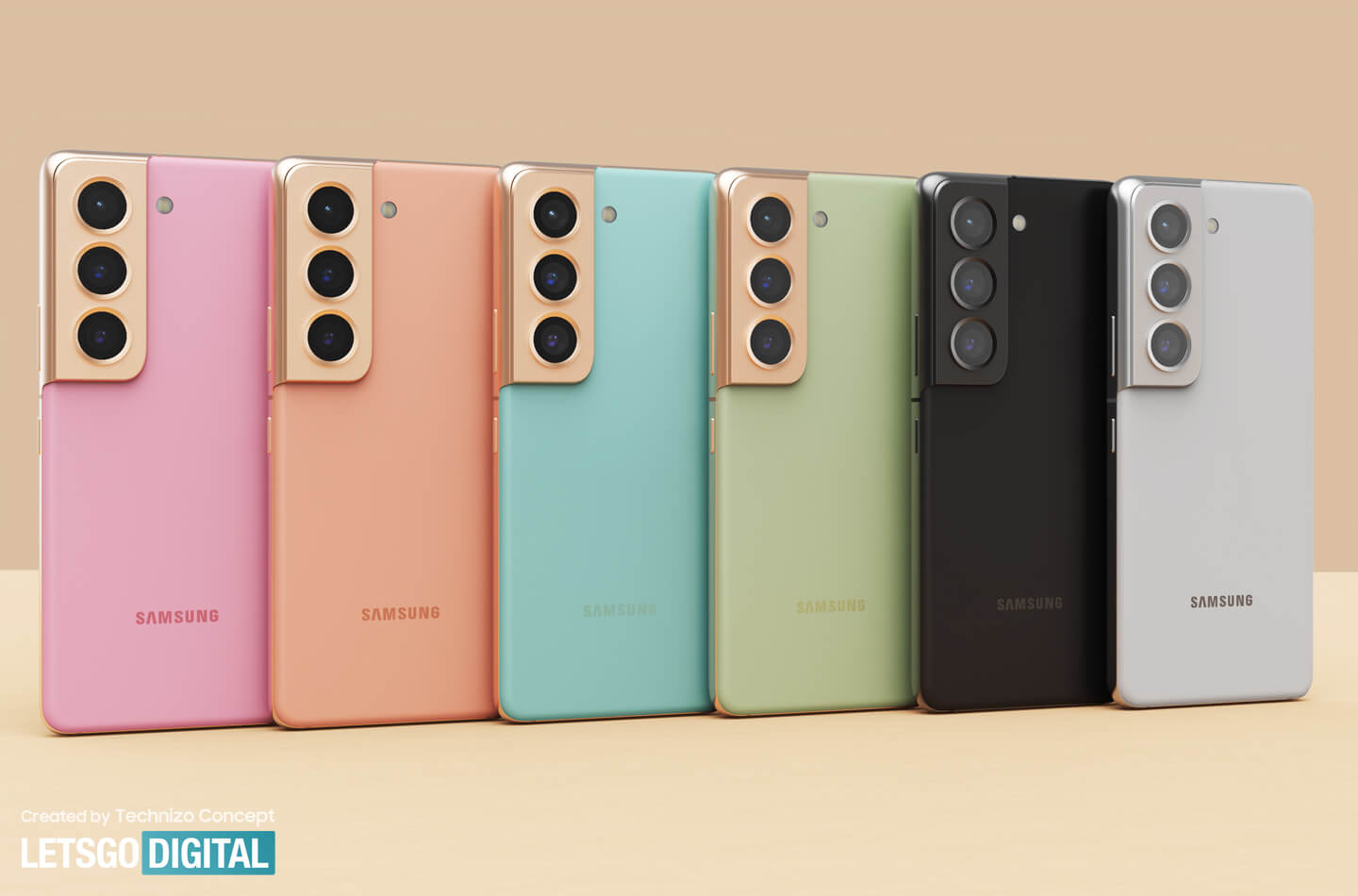 Note to publishers : The product renders in this publication are created by Technizo Concept in collaboration with LetsGoDigital. The 3D renders are for illustrative purposes only. This product is not for sale. You can use the copyrighted images for your own website, YouTube and/or social media channels, please be so respectful to include a clickable source link into your publication.