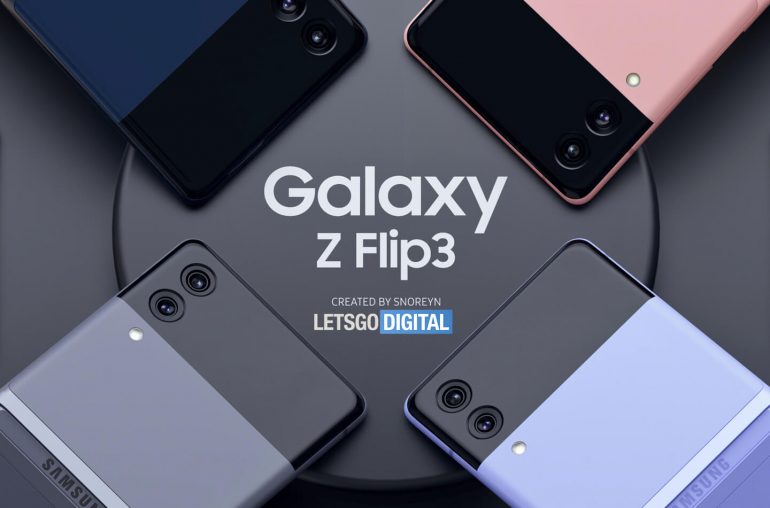 Samsung’s new clamshell will have many new features, including a larger cover display and a sturdy frame. Read all about the Samsung Galaxy Z Flip 3 here!

As the introduction of Samsung’s new foldable smartphones gets closer, more and more is becoming known about the Galaxy Z Flip 3 and the Galaxy Z Fold 3. Earlier this week, official promotional material from Samsung leaked, unveiling the design of both devices. The new Fold will be the world’s first foldable phone with an under-screen camera. In this publication, however, we will limit ourselves to the new Flip which gets a new two-tone design.

Like its predecessor, the Galaxy Z Flip 3 will be a clamshell phone with a horizontal folding line. The dual camera and cover screen is covered in black, the rest of the housing is given a different color. This time Samsung seems to make a whole range of colors available.

The leaked photos show that at least a gray, beige, green and purple model will be released. In addition, there is talk about a black, white, blue and pink model. The available color variants will differ per region. Samsung will probably also offer some exclusive colors via their site.

Based on all the new information, graphic designer Giuseppe Spinelli has created a series of highly realistic product renders for LetsGoDigital, in which the Galaxy Z Flip 3 is shown in all expected colors. 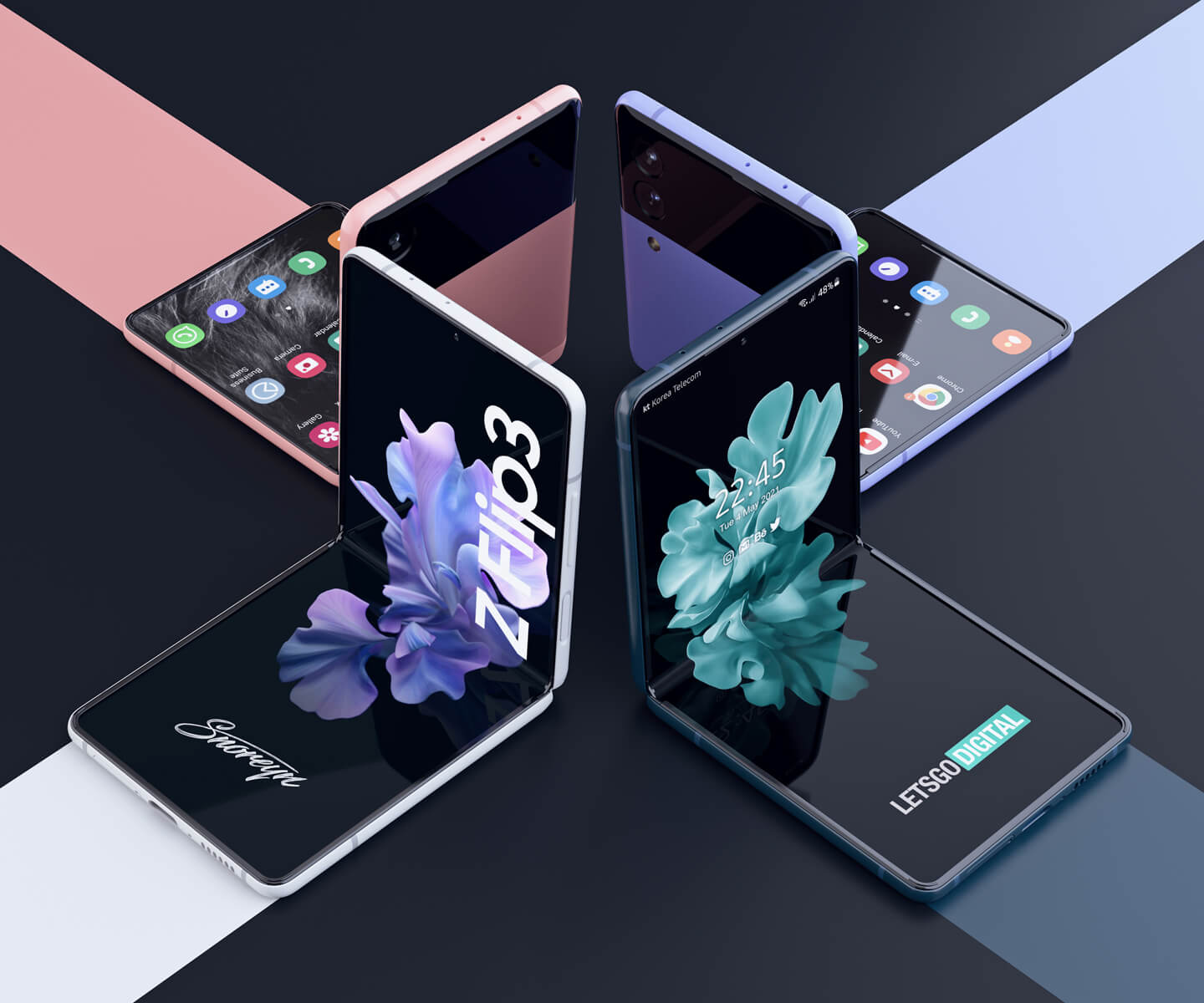 What is expected of the Samsung Z Flip 3?

The dual camera setup seems to remain unchanged in terms of resolution, it contains a 12 megapixel wide angle and a 12 megapixel ultra wide angle camera. The cover screen will be larger, the original Z Flip was equipped with a 1.1” display, the new model will likely feature a 1.83” cover display meaning some more content can be displayed – handy for incoming messages or when taking a selfie.

The 6.7” flexible screen will probably remain the same in size. What is new, the Samsung Z Flip 3 will support the 120Hz refresh rate. The centrally placed punch-hole camera will stay, presumably the same 10 megapixel image sensor will also be retained. As far as the camera is concerned, only software improvements are expected, the sensors and lenses of all cameras seem to remain unchanged – just as with the Galaxy S21. 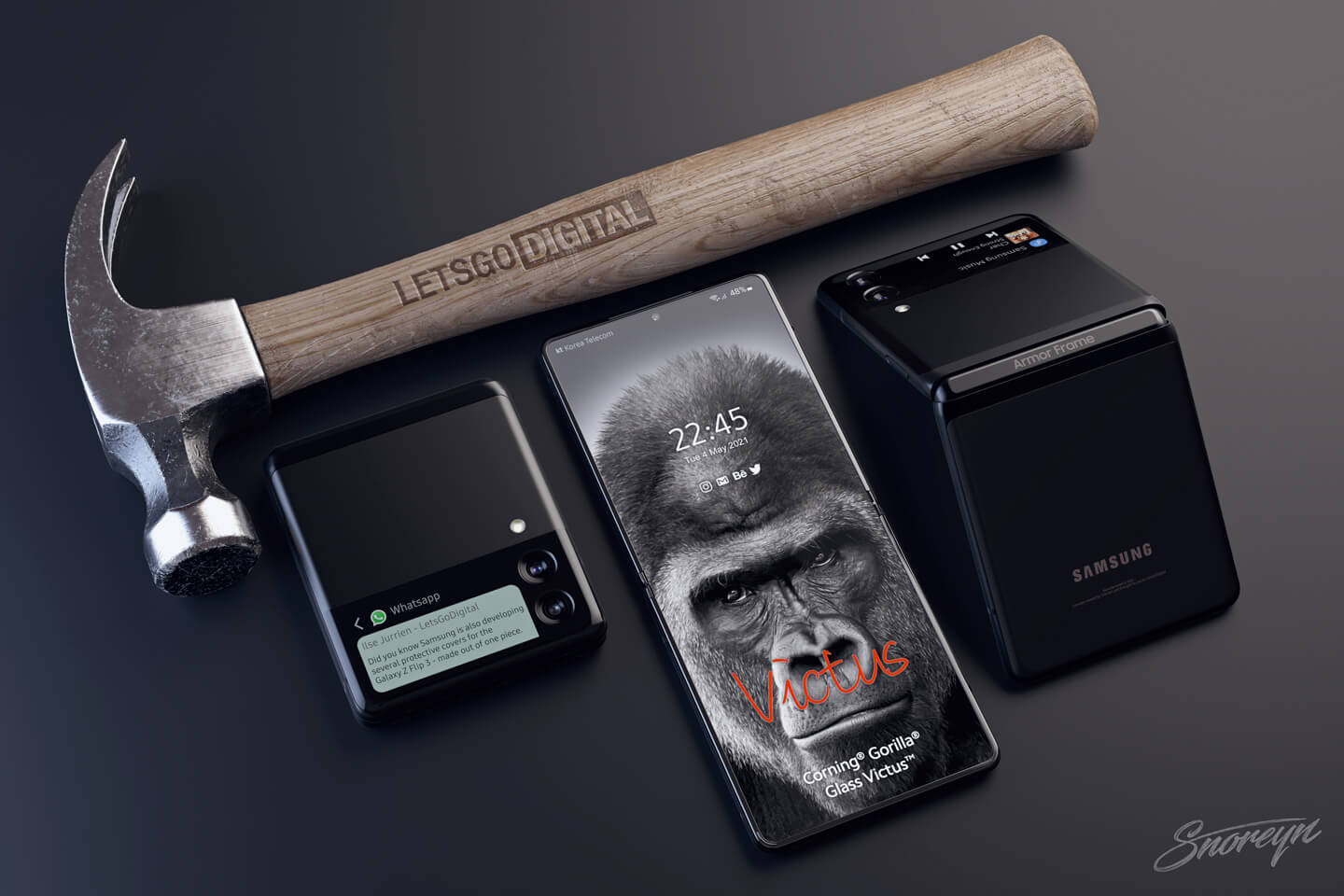 For the first time Samsung will provide both the front and back of the clamshell with Corning Gorilla Glass Victus, to make the foldable extra scratch and drop resistant. In addition, the frame also seems to be adjusted, the new “Armor Frame” will be stronger than before. The screen will also be extra reinforced by “Pro-Shield” technology – presumably a kind of counterpart to Apple’s Ceramic Shield.

This time Samsung seems to invest extra in the sturdiness and durability of its foldables. Not only does this result in a stronger frame and a more scratch-resistant display, the South Korean manufacturer also seems to provide the Galaxy Z Flip 3 with an IP rating for the first time. The folding phone is not expected to be completely dust and waterproof, but it will be splash-proof – which would of course be a step in the right direction.

Naturally, the hardware and software will also be renewed. Supposedly, the Samsung Z Flip 3 is powered by the Qualcomm Snapdragon 888, which will guarantee extremely fast and stable performance. This 5nm chipset comes with an integrated 5G modem. In addition to a 256GB model, a 128GB model is also expected this time. This enables Samsung to lower the starting price. The device will run on the Android 11 OS, in combination with the One UI 3.3 user interface. It is a renewed interface compared to the UI that can be found on the Galaxy S21 models. 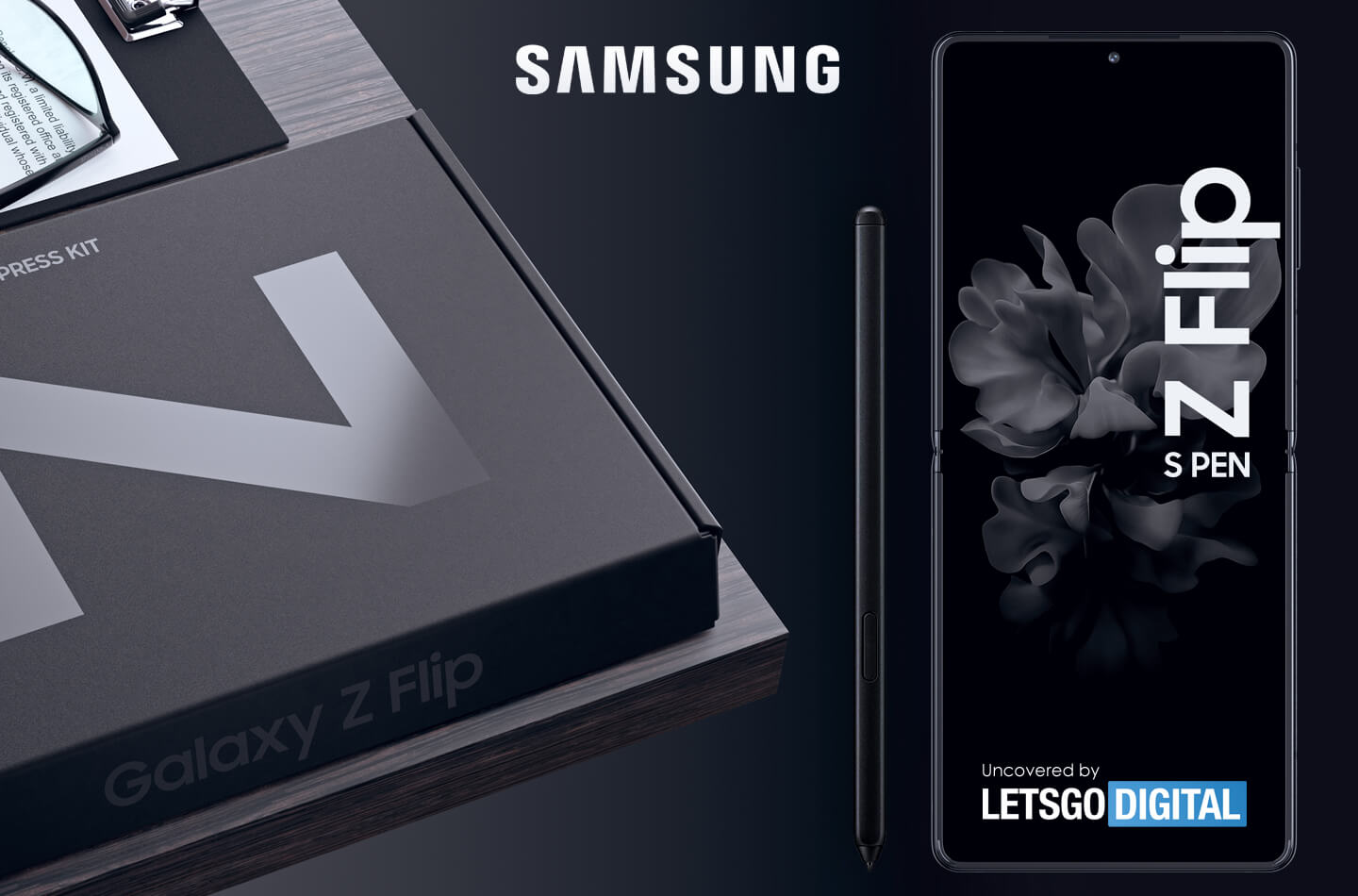 Samsung seems to be working on S Pen support for its foldable devices. It’s almost certain that the Galaxy Z Fold 3 will be compatible with Samsung’s famous stylus pen. Some believe that this will also apply to the Galaxy Z Flip 3. Samsung recently registered a trademark for “Z Flip“, which made mention of a stylus pen. Nevertheless, that is no guarantee that the Z Flip 3 will actually offer S Pen support. I personally do not expect that the upcoming clamshell from Samsung will be made compatible with the S Pen. For this we will probably have to be patient until the Galaxy Z Flip 4. But who knows…

Regarding the battery and fast charging options, unfortunately no changes seem to be made. The Samsung Galaxy Z Flip 3 5G, like its predecessor, will be equipped with a dual battery with a total capacity of 3,300 mAh. A recent 3C quality certification has shown that the 15W fast charging function will also remain the same.

This seems to become the weakest part of Samsung’s new clamshell. After all, the battery life of the Z Flip was rated as “poor” in many expert reviews, the new model does not seem to change that. The maximum charging power of 15 Watt is of course also very minimal for a high-end device in the year 2021. It was expected that the fast charging functionality would be increased to a minimum of 25 Watt, some even hoped for 65 Watt. However, this does not seem to be the case; the Galaxy Z Flip 3 will only support 15 Watt wired / wireless charging.

Then the question remains: which accessories will be available for the new Flip? Last year a Leather Cover was released, which consisted of two parts. Samsung may have found a solution to also manufacture covers from one piece, so that the hinge is optimally protected. The South Korean manufacturer was recently awarded a patent for such a protective cover. 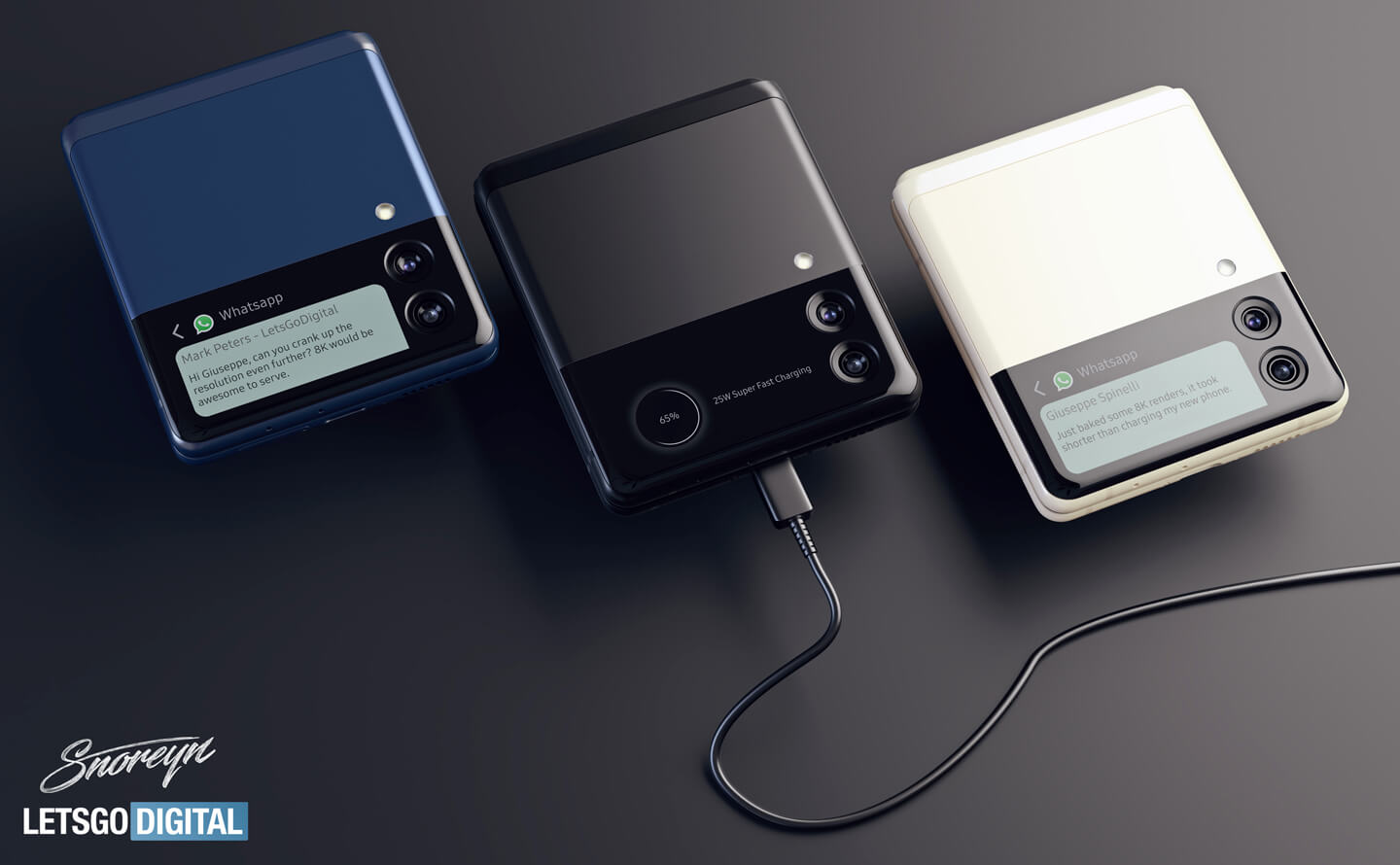 Samsung will host a Galaxy Unpacked event around July, where both the Galaxy Z Flip 3 and Galaxy Z Fold 3 will be presented. A month later, another event is expected to be set up for the Galaxy S21 FE, this will be the cheapest model in the S21 line-up.

Last year, both the Galaxy Z Flip and the Galaxy Z Flip 5G -the latter was introduced five months later- carried a suggested retail price of € 1,500. If we are to believe the rumors, Samsung is doing everything it can to market the new model cheaper. This may also be the reason why the battery, fast charging functionality and the cameras will not be upgraded.

On the other hand, the South Korean manufacturer seems to be extra committed to the sturdiness and durability of its new foldable device. The larger cover screen and the many color variants should also make the Z Flip 3 extra attractive to buy. Moreover, Samsung seems to add an extra cheap 128GB model. This may result in a starting price of approx € 1,350 – € 1,400. 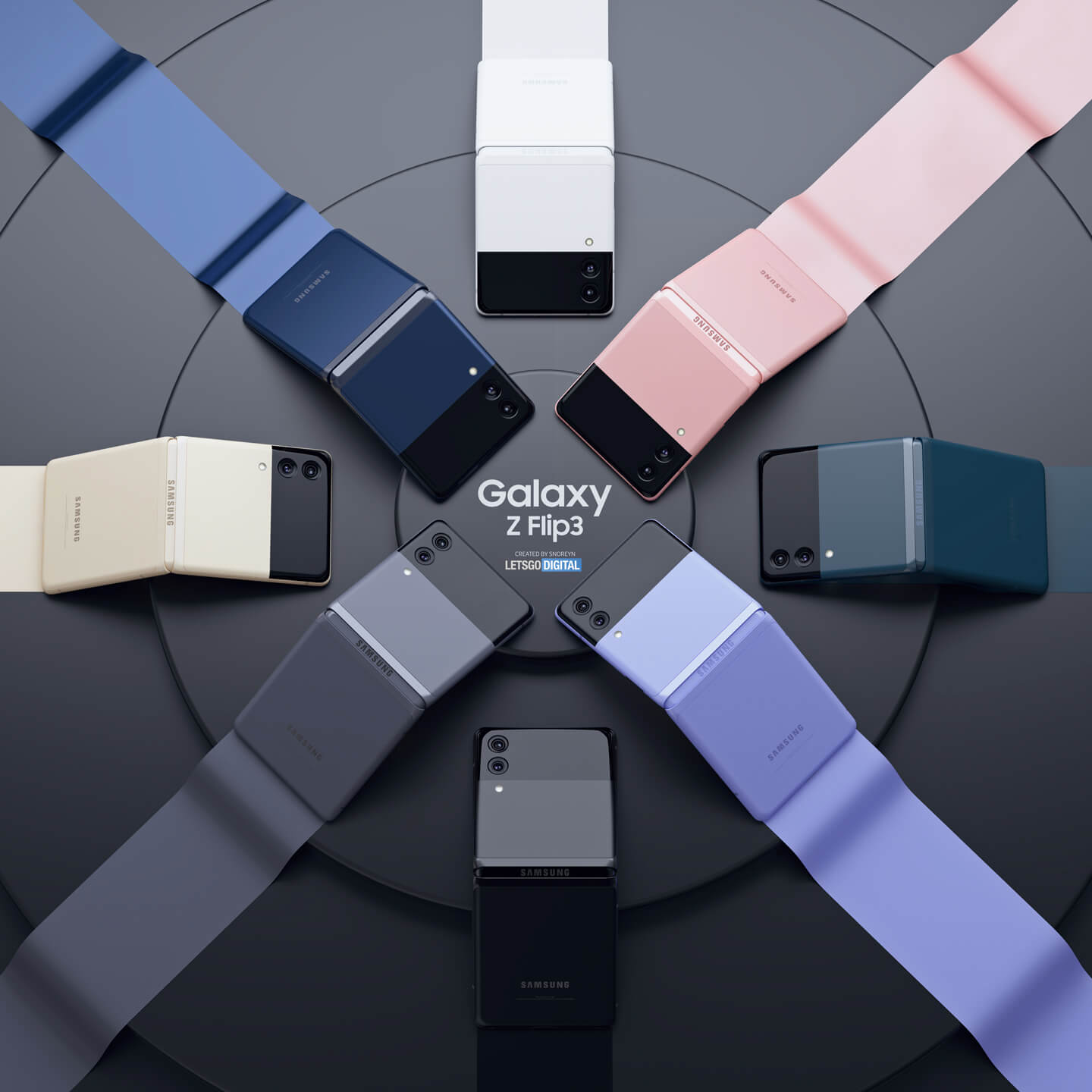 It will probably be possible to place a preorder order immediately after the official introduction. The actual release will then take place about two weeks later. Customers who purchase the Galaxy Z Flip 3 are expected to receive a set of Galaxy Buds 2 earbuds during the pre-order period. The new earbuds will probably be introduced simultaneously.

By the way, if you’re wondering what happened to the Galaxy Z Flip 2, don’t worry, you haven’t missed anything. Samsung will introduce their next Z Fold and Z Flip devices simultaneously, therefore the company seems to have decided to align the model names this year. Meaning there will be no Z Flip 2, instead there will be a Z Flip 3.

Note to editors : The 8K and 4K renders in this publication are created by in-house graphic designer Giuseppe Spinelli (aka Snoreyn).  The images are copyright protected. Feel free to use our pictures on your own website, but please be so respectful to include a source link into your publication.