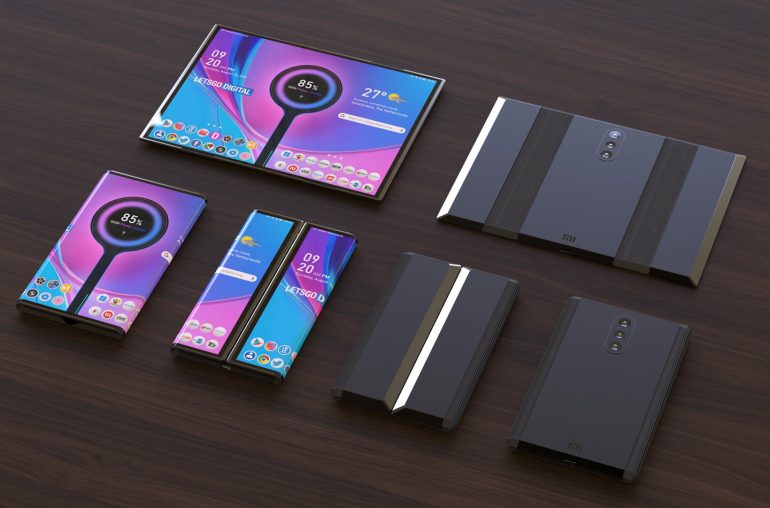 Patent shows renewed foldable smartphone from Xiaomi with a triple camera at the rear. The phone comes with a large flexible display that can be folded twice.

At the beginning of this year Xiaomi has put a demonstration video online in which a working foldable phone was shown. Unique to this device were the two folding lines, the left and right screen part could be folded backwards. LetsGoDigital designed a series of 3D renders of the Xiaomi foldable smartphone based on the video images. In the meantime a half year has passed, it’s still not possible to buy the Samsung Galaxy Fold nor the Huawei Mate X, also other manufacturers have remained remarkably quiet when it comes to folding phones.

A recently published patent may give us more insight into the updated design of Xiaomi’s foldable device. In March this year, the Chinese manufacturer filed a design patent with the EUIPO (European Union Intellectual Property Office), after which the patent was published on 5 August 2019. Seven patent sketches are included, showing the foldable device from all sides.

Just like the model that was shown at the beginning of this year, the patented Xiaomi foldable phone features one large flexible display that can fold twice. To get a better idea of ​​the differences between the two mobile phone models, LetsGoDigital has again produced a series of 3D renders. 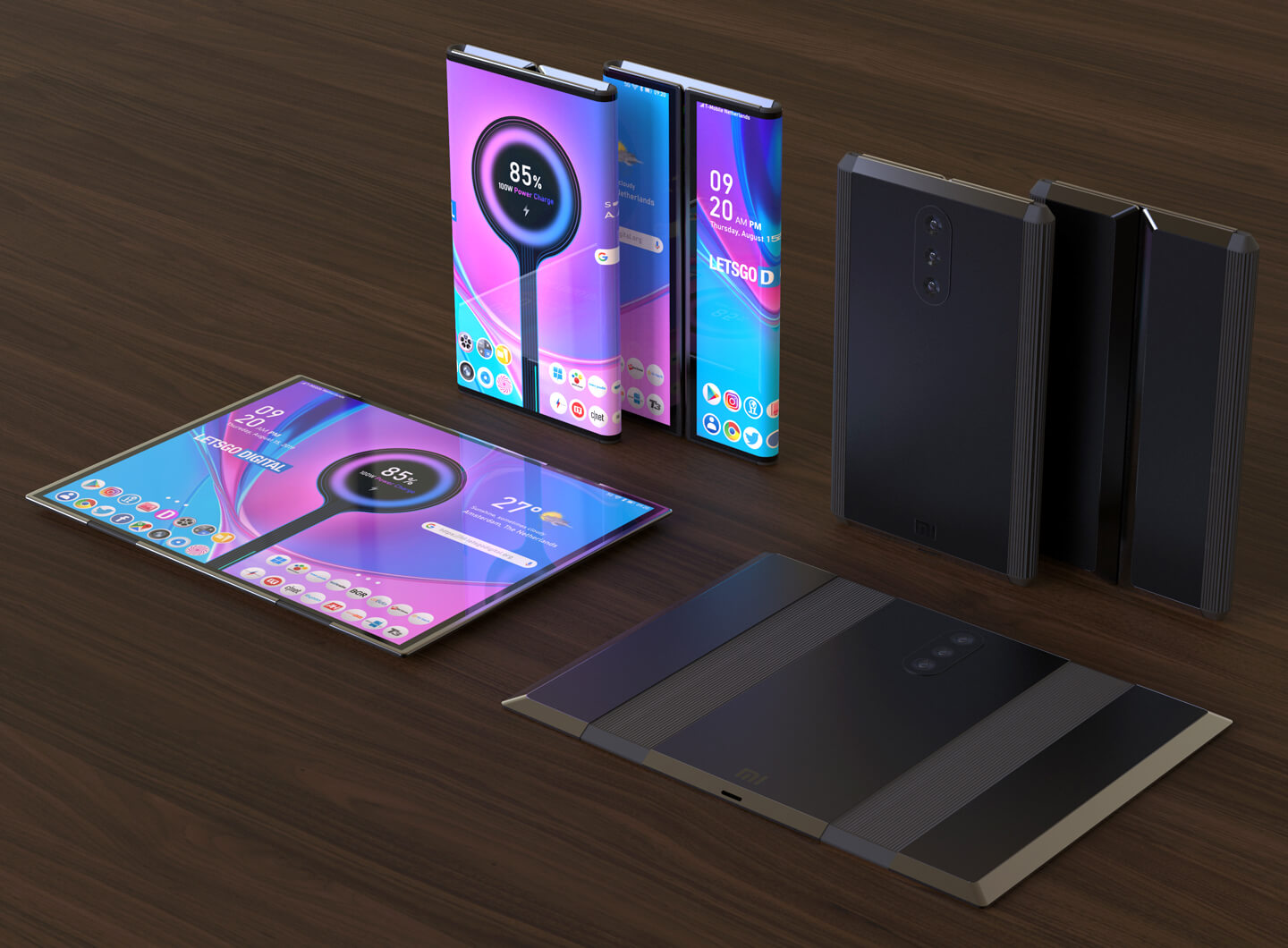 The first thing that strikes you is the thickness of the device. The dimensions of the sketches have been used to show as realistic a result as possible. However, the foldable phone is significantly thicker than it initially appeared to be. This does seem more logical though. After all, quite a few components are processed in such a device.

What is also striking is the rear, on which three cameras are situated that are placed vertically apart. As the cameras are centered on the back, you first have to unfold the smartphone fully before you can take pictures. It will be a bit similar to photographing with a tablet, not the most ideal due to the large form factor. 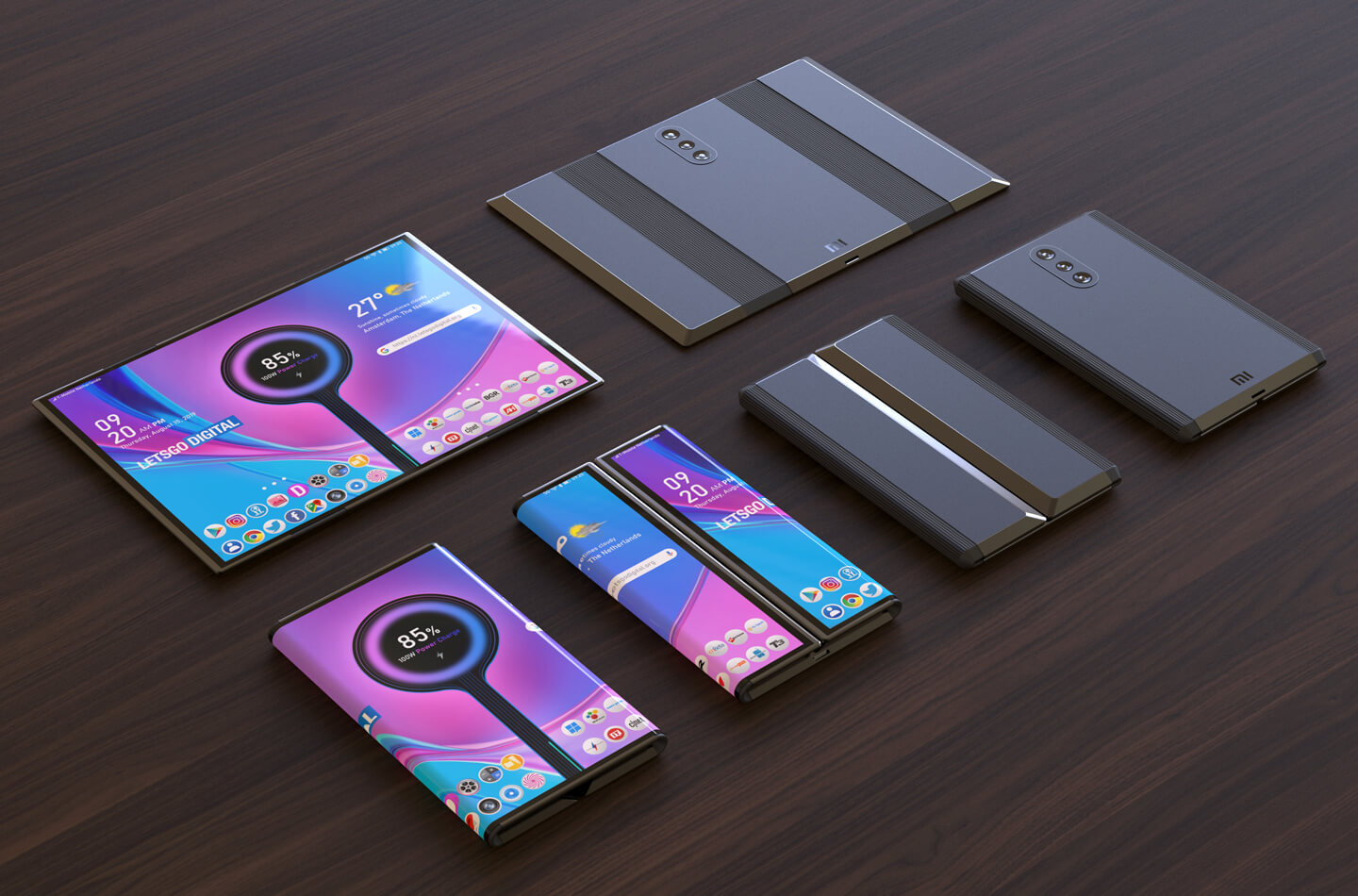 Since it is a design patent, the specifications of these cameras are not discussed. The most recent top models from Xiaomi are also equipped with a triple camera. The second camera comes with an ultra-wide angle lens and the third offers a telephoto lens with 2x zoom. Whether Xiaomi wants to use a similar setup for their folding phone is unknown, but certainly not unlikely.

If you unfold the phone fully, you have a large display at your disposal with very minimal bezels. There is no selfie camera visible, perhaps it is placed behind the screen. Xiaomi has already confirmed they have this under-screen camera technology in development. The company usually pays a lot of attention to the selfie camera, so they certainly don’t want to leave that functionality out on the foldable phone. 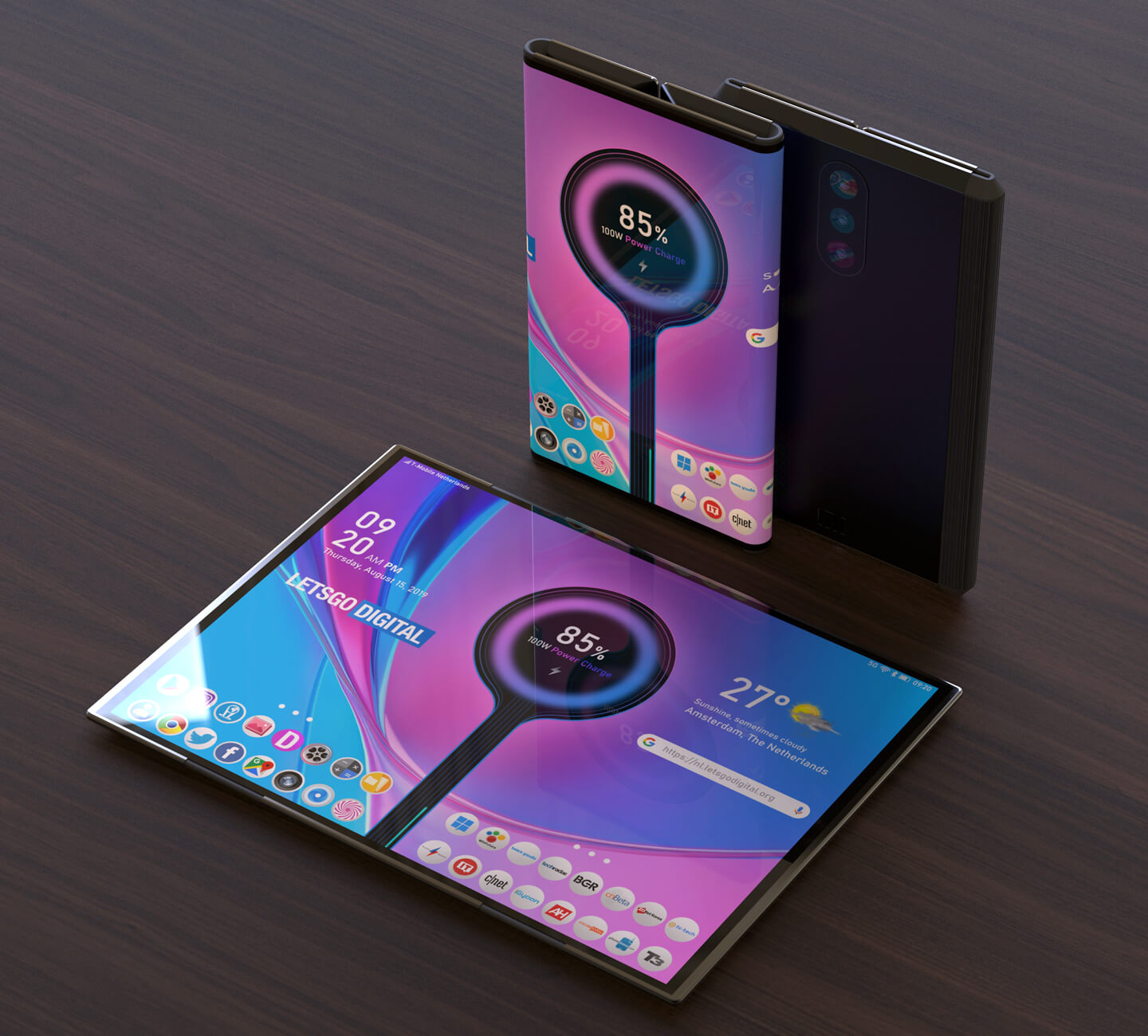 The rear of the housing is slightly curved on all four sides, which gives the device an extra stylish appearance when folded. The bottom of the device shows a USB Type-C connection, a 3.5 mm connection seems to be missing.

There are also no buttons to be found on the enclosed sketches. These were also not visible on the teaser video at the time, it may be a smartphone without buttons – similar to the Meitu Zero and the Vivo Apex 2019 concept phone. The fingerprint scanner is also not visible on the images, you may assume that this sensor is placed behind the screen.

The sketches do not reveal which side or sides you can fold this phone, as the patent sketches only show the device in an fully open position. It seems likely that you can fold the left and right display part backwards, just like the demonstration video showed early this year. Recently competitor Samsung has also patented a similar phone model. 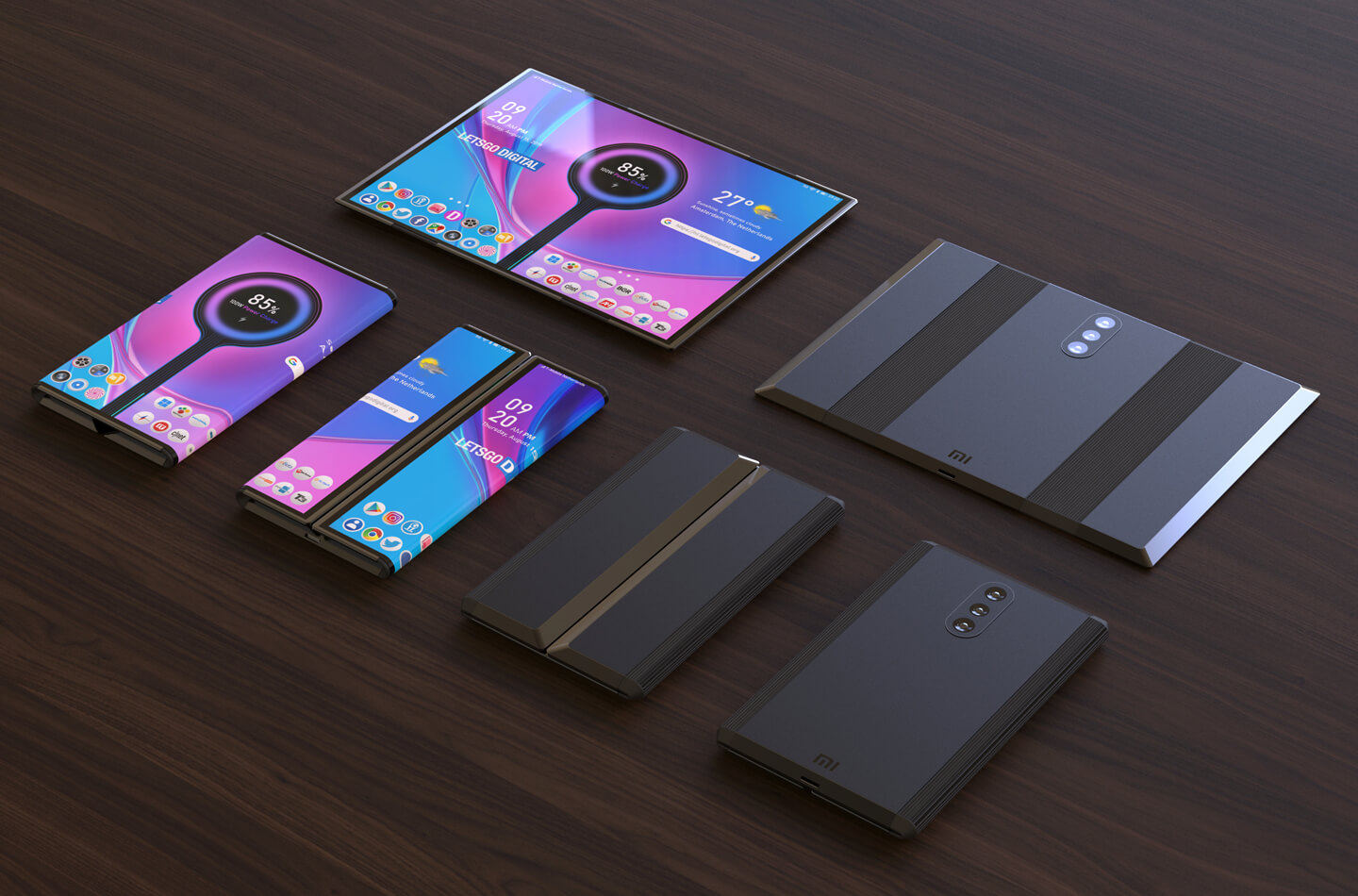 However, looking at the hinge it also seems possible to fold the device the other way, so that the display is placed on the inner side. Ideal when you carry the foldable phone with you, this way the screen remains optimally protected. We have included both options in our render set.

No specifications are known about the battery, but since Xiaomi demonstrated its 100 Watt charging technology in March this year, it could well be that this revolutionary phone will also come with this incredibly fast charging system. This will allow users to fully charge a 4.000 mAh smartphone battery in just 17 minutes.

In addition, it seems obvious that the Xiaomi foldable phone will also offer 5G support. Xiaomi has already released a 5G smartphone, the Mi Mix 3 5G. Moreover, the Chinese manufacturer has already indicated that it wants to introduce affordable 5G smartphones in 2020, making it even more likely that the foldable phone will also offer 5G support. The Huawei Mate X is also compatible with the 5G network, this was the very first foldable 5G phone.

It is still completely unknown when Xiaomi will present its first folding device. It seems certain that one is coming though. Possibly MWC 2020 is the right moment. If everything goes according to plan, both the Samsung Galaxy Fold and the Huawei Mate X will go on sale in the upcoming month(s). Both models, however, have a very high retail price of € 2000 and € 2300 respectively, so the question remains how many people will be willing to buy these expensive foldable smartphones. 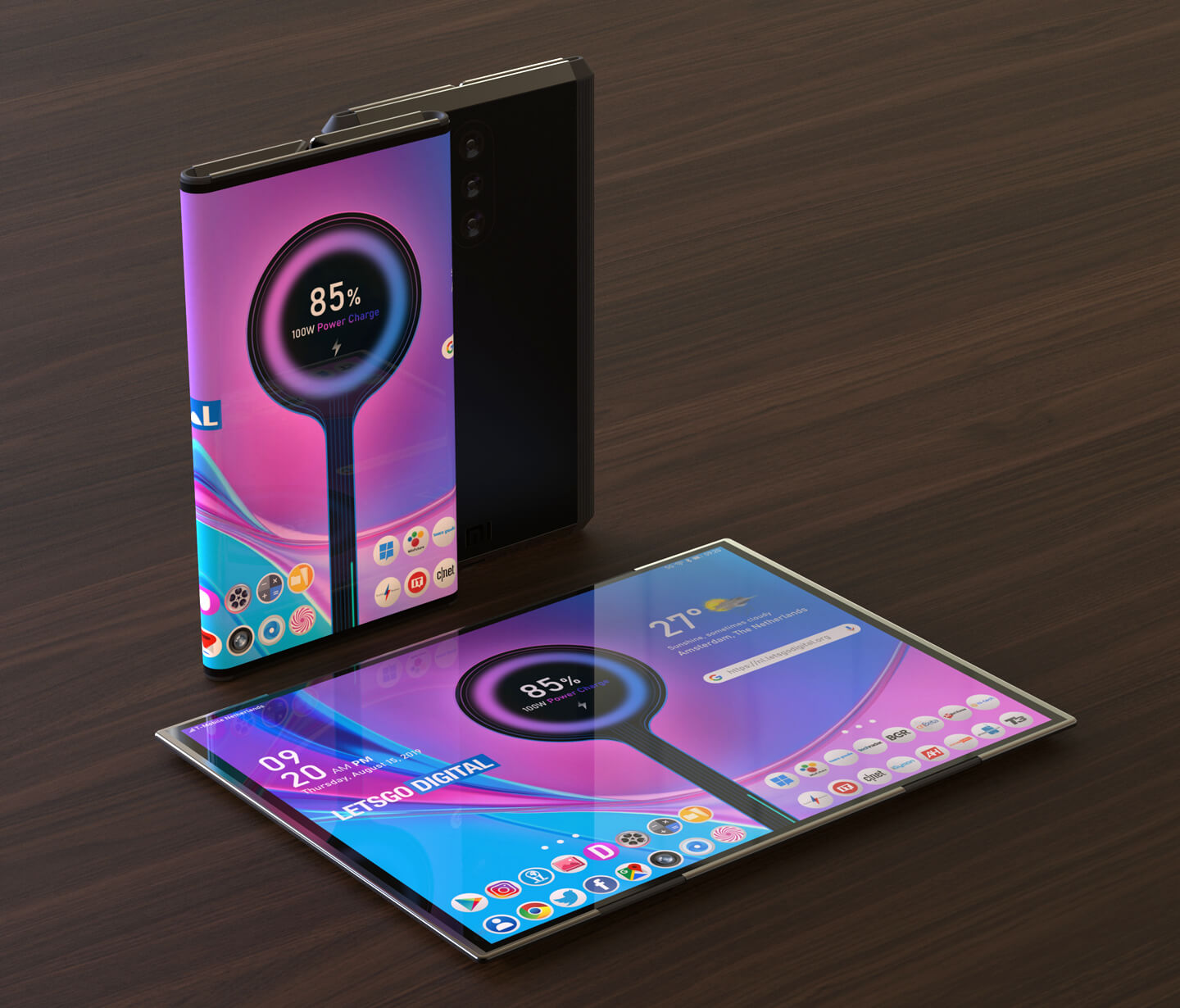 Xiaomi, on the other hand, is known for their competitive pricing strategy. For example, the Xiaomi Mi 9T Pro comes at a starting price of just € 430, for the 64GB model. For 128GB you only pay € 20 more. Both versions run on Android 9 and are powered by a Snapdragon 855 chipset with 6GB of memory. Even OnePlus is no longer able to market its flagship devices at such a competitive price tag. If Xiaomi sees an opportunity to put her folding phone on the market for a reasonable price, let’s say € 1500 instead of € 2000 / € 2300, then the market for folding phones may finally break open.

It is expected that Lenovo will also present a foldable smartphone soon, in the form of a Motorola Razr. In contrast to the aforementioned folding smartphones, this device will have an elongated display (clamshell model), instead of a wide screen (tablet format). Nevertheless, it is generally expected that the Motorola foldable phone will also be a lot more affordable than the devices that have been presented to date. There is talk of a price tag of around $ 1500 USD. 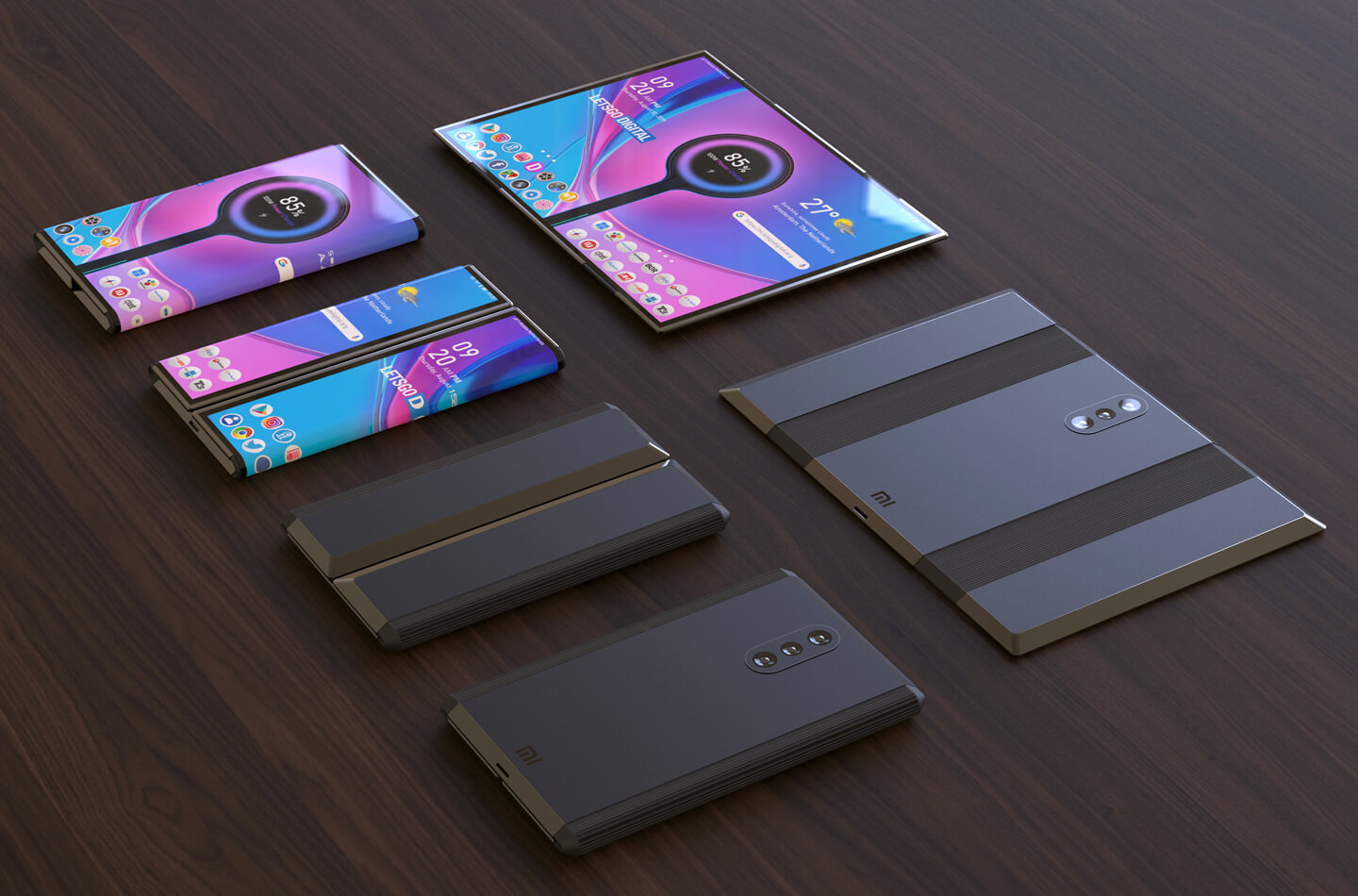 Regarding the name of Xiaomi’s foldable phone, at the beginning of this year, Lin Bin, co-founder and CEO of Xiaomi, announced via Chinese social media that two names are currently being considered; Xiaomi Dual Flex and Xiaomi MIX Flex. However, the company was still open for suggestions, so it is possible that the device will be released under a completely different name.

Here you can find the patent from Xiaomi.

Note to editors: The 3D renders presented in this article are copyright protected and designed by LetsGoDigital. You can use our artwork for free, as long as you include a clickable source link into your story. Thank you very much for understanding.