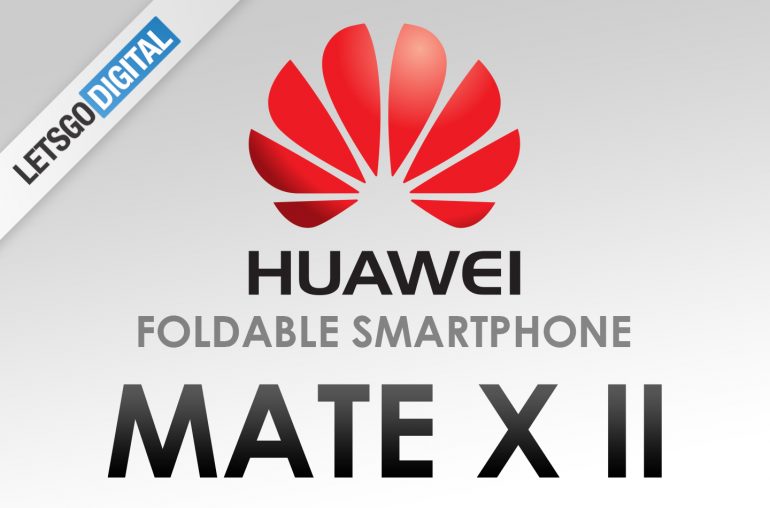 Patent shows 3D renders of successor Huawei Mate X. This time the phone folds inwards and there is also a front-display available, similar to the Galaxy Fold. It's a full screen design. The side bar is maintained for the cameras.

At MWC 2019 two folding smartphones were introduced, the Samsung Galaxy Fold and the Huawei Mate X. The main difference between these two folding phones is obvious; the Samsung device folds inwards, while the Mate X folds outwards. A recently published patent shows that Huawei is also working on a foldable phone that can be folded inwards. This model features a full front-display. 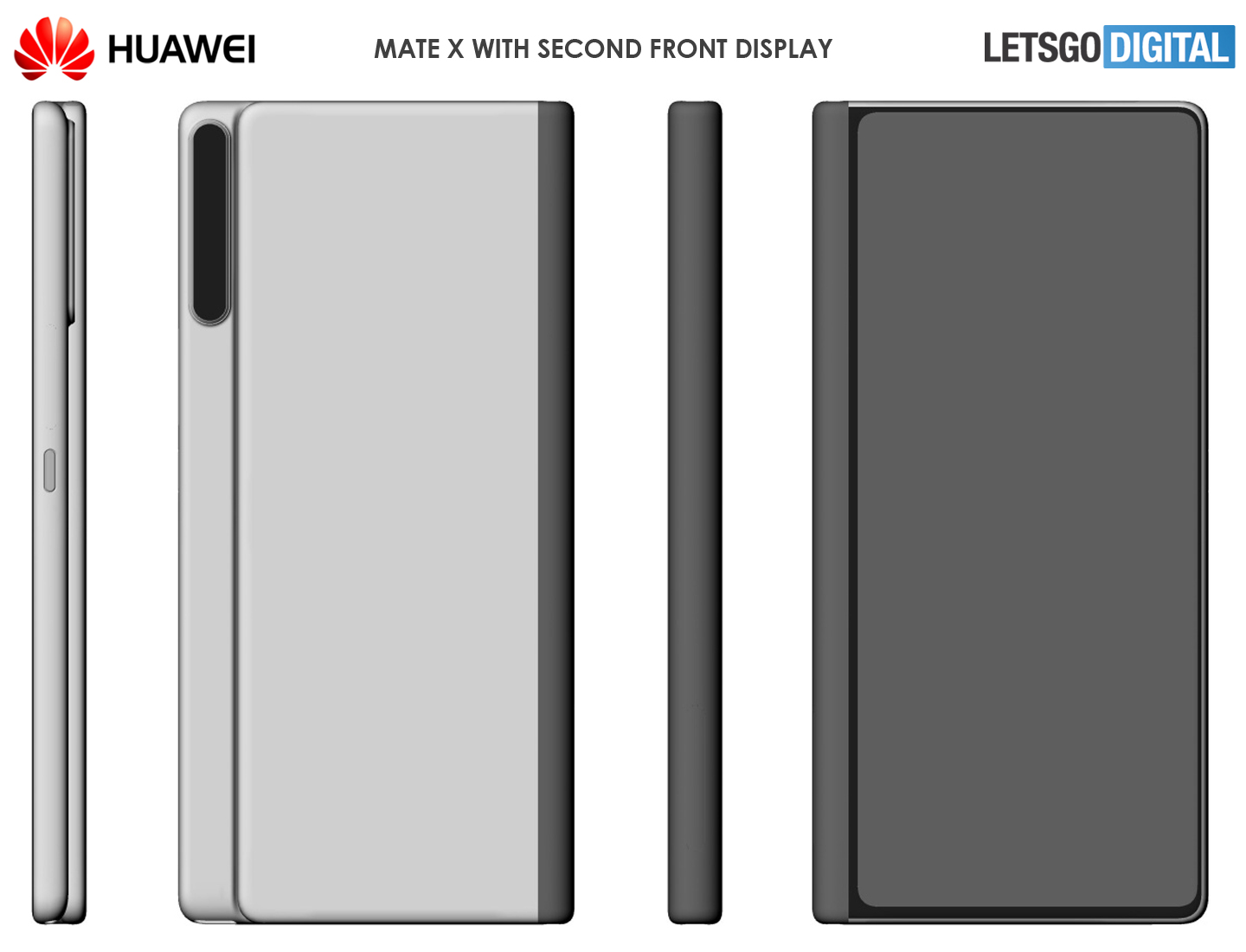 In July 2018 (before the introduction of the Galaxy Fold), Huawei Technologies filed a design patent with the WIPO Global Design Database. The patent was published on June 18, 2019 and shows a foldable phone that at first sight looks a lot like the Mate X.

However, if you look at closer look at the drawings, you will see that the device can be folded inwards. Ideal when you carry the phone with you, after all the screen will remain better protected against scratches and bumps. In addition, a second front screen has been added, making the design look very similar to the Fold.

The design patent consists of eight drawings. This time no simple sketches, Huawei has added 3D renders to the patent. This seems to indicate that the Chinese manufacturer is indeed currently developing this device. It seems to be a logical successor to the Huawei Mate X.

Like the Mate X, the patented smartphone features a side bar. The camera system consists of multiple camera lenses, the device will probably be fitted with Leica optics again. Thanks to the use of a side bar, an almost full screen design can be created – without notch. When you fold the phone, the large flexible screen is on the inside.

When using the device, it may be useful in some cases to use only one screen section. After all, you do not always need a tablet format screen. For these situations Huawei has added a second screen to the front of the device. The front screen of the Mate X II is considerably larger than that of the Galaxy Fold.

The housing also seems to be tilled to a new level. The device gets a metal housing and seems to be quite thin. The corners of the folding telephone are significantly rounder than the existing design. The button structure also differs from the current Mate foldable smartphone.

One button is placed on the right-hand side, with the SIM compartment directly above it. A connection for the charger is missing from the drawings. It is possible that this smartphone can only be charged wirelessly, although it cannot be excluded that this connection will still be added to the final model.

The renewed smartphone design seems to surpass the design of both the Mate X and the Galaxy Fold in all respects. During transport the flexible screen remains well protected, while you still have a full front display at your disposal. Once unfolded, a large tablet screen format unfolds, without notch. 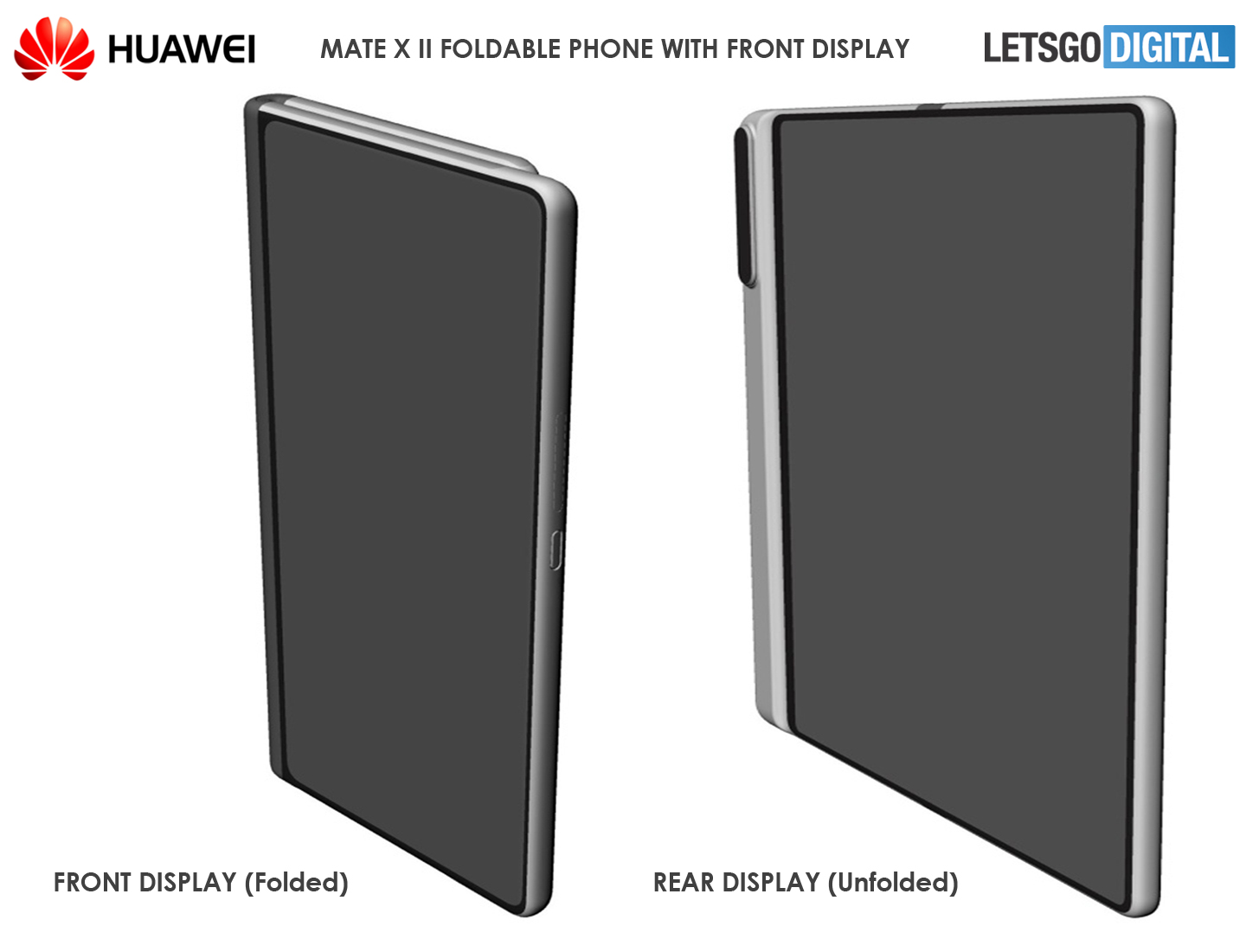 Introduction of a new foldable phone from Huawei

Unfortunately, it is still unclear when Huawei will unveil its second generation foldable smartphone. The launch of both the Samsung Galaxy Fold and the Mate X has been postponed for the time being. The reason for the Fold is clear. Samsung is working on an improved flexible screen, after several review copies broke within a day.

The situation with the Huawei Mate foldable smartphone is a bit more complicated. Although Huawei’s CEO has indicated that he wants to carry out additional tests, in order to prevent a similar drama as with the Fold, it seems obvious that the US ban also played an important role in this decision. After all, the company can no longer introduce smartphones that run on the Android OS.

Within a few months the Ark OS / HongMeng OS could be ready for launch. But the question remains; how will this operating system perform and will Huawei manage to create an app store that is as large and complete as the Google Play Store. This may get in the way of the introduction of new foldable phones. As these are very expensive devices, people want to know what they are buying.

Here you can find the patent of the Huawei foldable phone.