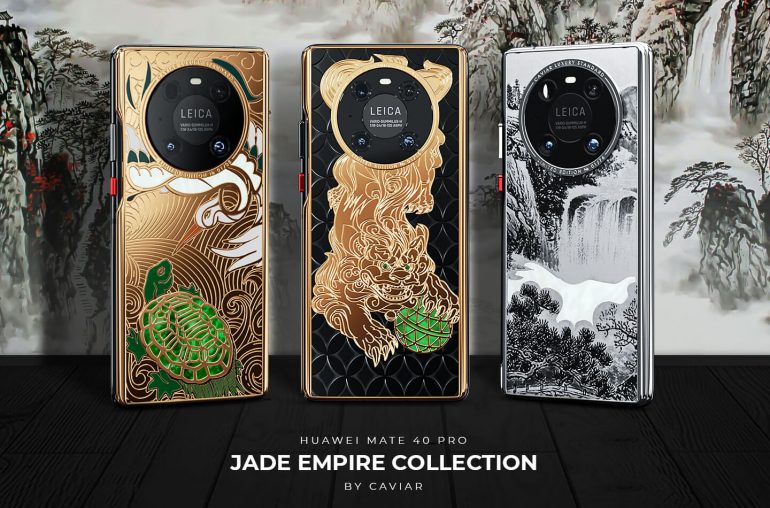 Caviar releases the most expensive Huawei smartphone ever. It is a Huawei Mate 40 Pro richly decorated with 18 karat yellow gold and green jade.

The jewelry brand Caviar is known for enriching high-end Apple iPhone and Samsung Galaxy smartphones with the most durable and rare materials, such as gold and gemstones. Last month, the company released a Huawei Mate 40 Pro Limited Edition for the first time to in honor of the 100th anniversary of the Communist Party of China. Due to great success, Caviar has decided to design a new collection based on the same Huawei smartphone. The new Jade Empire collection is dedicated to and inspired by Chinese culture.

Caviar releases three models within the Jade Empire collection, of which the flagship is the most expensive Huawei smartphone in the world. The name of the collection has a double meaning. Jade is an important gemstone in this collection and at the same time refers to one of the symbolic names of ancient China. 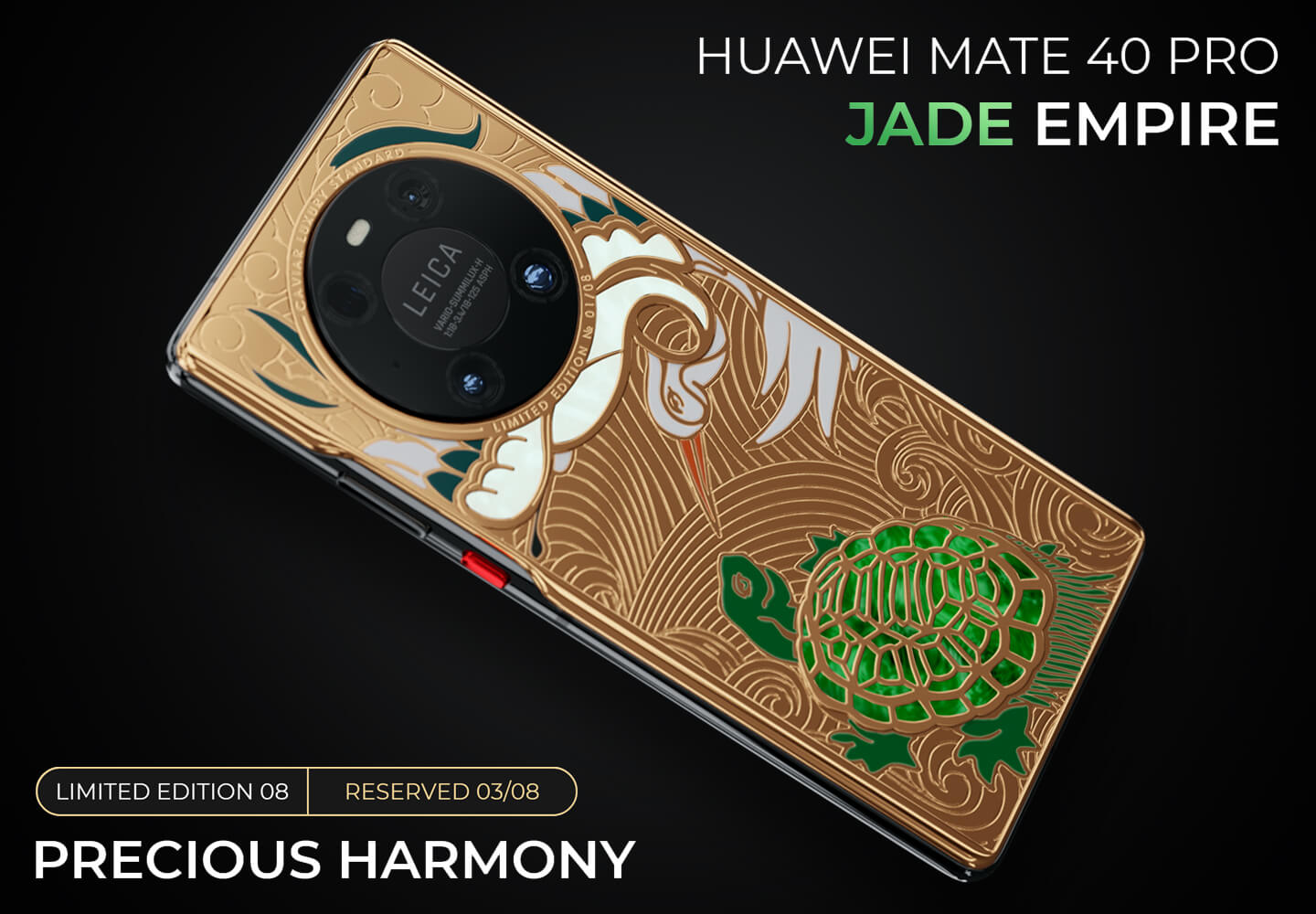 The Huawei Mate 40 Pro Precious Harmony is the most luxurious model. This device is crafted from 18K yellow gold and decorated with a laser-engraved pattern inspired by traditional Chinese ornaments.

Two Chinese sacred animals are included in the design; a turtle and a crane. The turtle symbolizes immortality and fertility. Green jade is used to shape the turtle, the jade is framed with gold to refine the turtle’s shell. The crane symbolizes happiness and good luck. The bird is made of jewelry enamel, white jade and 18K gold.

Due to the extreme complexity and the refined details, only 8 copies of the Precious Harmony model will be made. This number is not a coincidence, in Chinese culture the number 8 symbolizes wealth and prosperity. Are you curious what the most expensive Huawei smartphone in the world costs? For $71,080 USD the device will be delivered to your home.

This may be the most expensive phone from Huawei, but Caviar has already released more expensive models this year. Consider, for example, the Samsung Galaxy S21 Ultra which has been transformed into a 1KG gold bar. For this model, the retail price was set at a whopping $169,000. 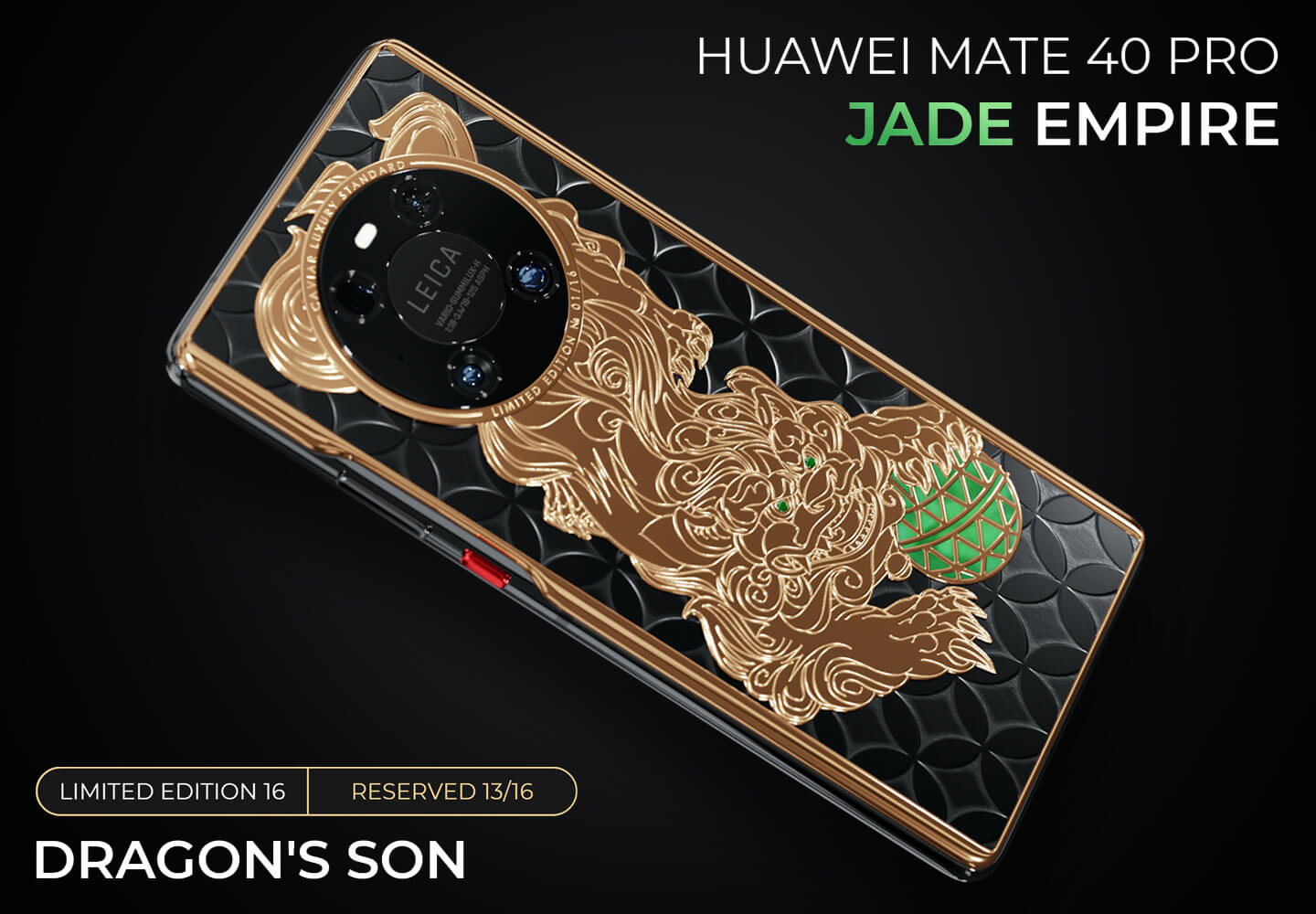 The second model in the Jade Empire collection is called Dragon’s Son and is inspired by the winged dragon Pixiu. Pixiu is a beloved symbol of prosperity in China and is believed to attract wealth to all who hold it.

For this model Caviar has chosen to decorate the back of the Huawei Mate 40 Pro with an image of the winged dragon, which holds a jade-gold ball in its paws. The housing is enriched with black composite onyx. To shape the dragon, laser engraving technique was used, on a thin layer of gold. The ball is made out of green jade.

The Dragon’s Son comes in a limited edition of 16 pieces. According to Chinese numerology, the numbers 1 and 6 have a sacred meaning. Together they stand for leadership, courage and honour, but also for prosperity and profit. This Limited Edition version costs $6,450 USD. Although this price is certainly not for everyone, it is a shrine compared to ‘the most expensive Huawei smartphone in the world’. 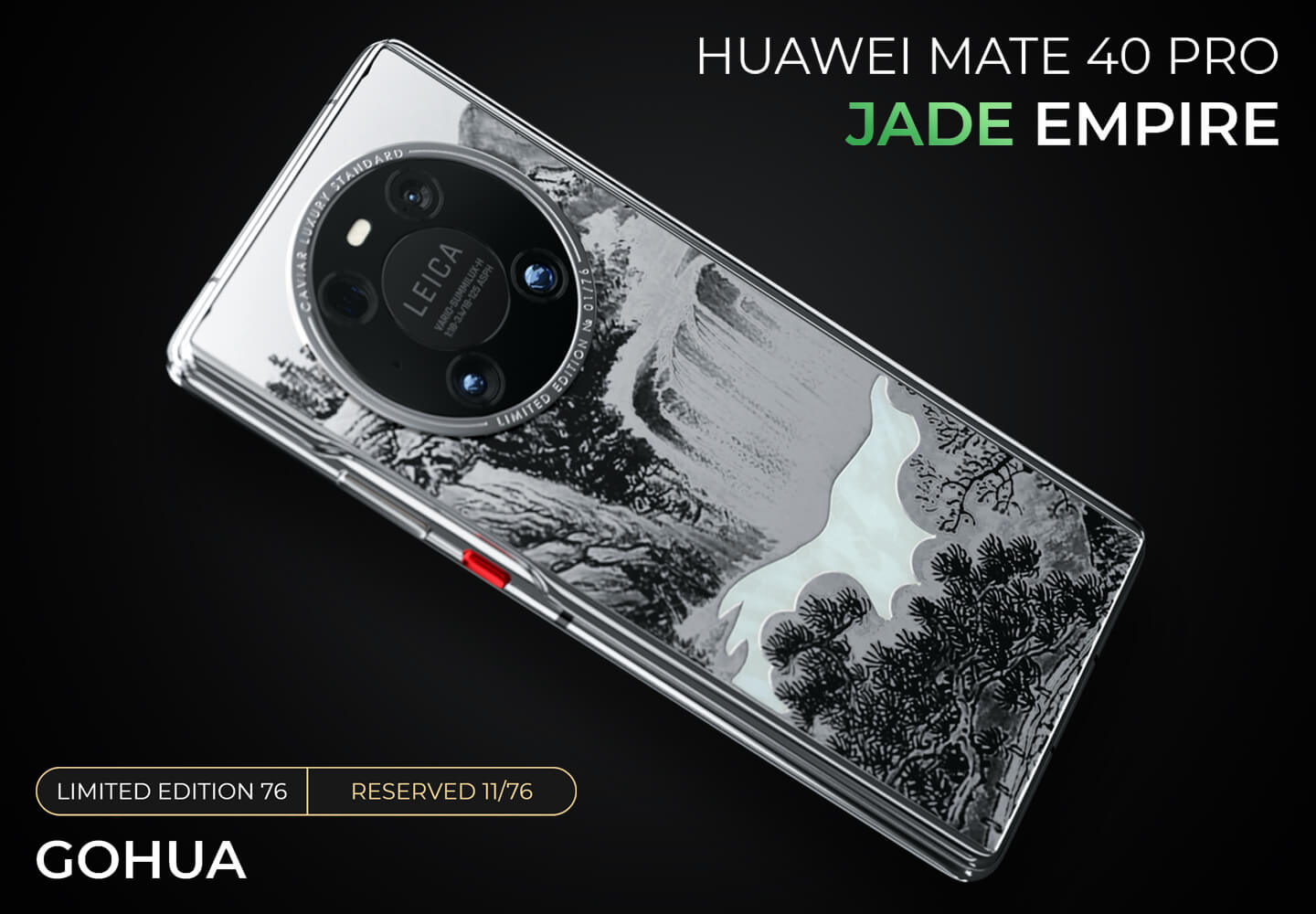 Huawei Mate smartphone made of titanium

The third model that Caviar has released is called Gohua. The Gohua model is a tribute to the unique fine arts of China, which was born between the II-III centuries BC. Collectors are willing to spend a fortune on beautiful landscapes made with ink on silk or paper.

Caviar has fitted the Gohua model with a titanium case with marble jade inserts, which are framed with polished titanium. Laser engraving has been applied to shape the Gohua landscape. The use of marble jade is not a coincidence, it has a sacred meaning: it helps to maintain caution and protects its owner from evil intentions.

The smartphone is presented in a limited edition of 76 pieces. In numerology, these numbers have great significance: seven symbolizes confidence and six signifies success in business. The price of this Huawei Mate 40 Pro Limited Edition version is set at $6,290 USD.