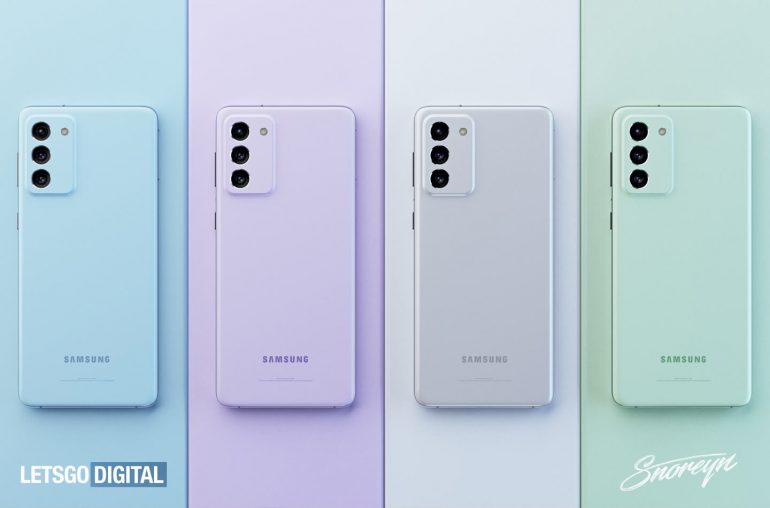 The Samsung S21 FE (Fan Edition) will be the cheapest model of the 2021 S-series. How will this phone look like and what are the expected specs?

Last September, Samsung launched the Galaxy S20 Fan Edition, as an entry-level model within the high-end S20 series. The device was equipped with a relatively large display, a large battery, powerful hardware and the latest software. In addition, the S20 FE was marketed significantly cheaper than the other S-series models. It is therefore not surprising that this phone model became very popular. Now that the Galaxy S21 series has been officially announced, the question arises; will Samsung also release a Fan Edition of the S21 this year?

Although the S20 FE was the first Fan Edition within the S-series, it is likely that Samsung will release another FE edition in 2021, in the form of a Samsung Galaxy S21 FE. After all, the previous model was a direct hit and it was also a good replacement for the significantly less popular S10 Lite. 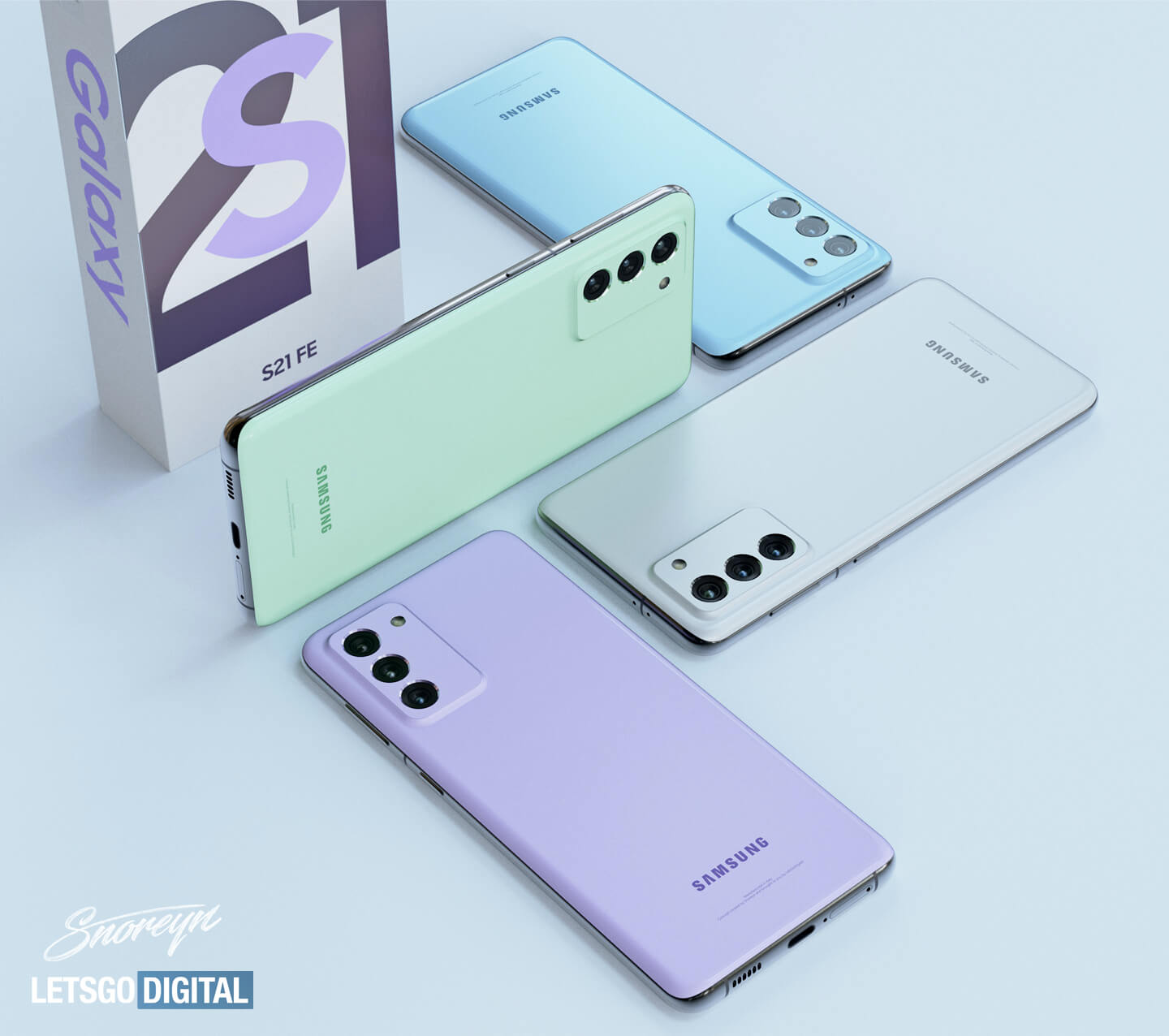 When is the Samsung S21 FE expected?

The timing of the release was also better. The S10 Lite was announced in January. While the S20 FE saw the light of day in September, so it was another half year wait for the new S-series models to be announced annually in February.

It is in line with expectations that Samsung will maintain this release schedule, in other words, an S21 FE will probably be released in the second half of 2021. Just as there seems to be a Samsung Galaxy Note 21 FE in the planning for the second half of the year.

This brings up the question; What can we expect from the S21 Fan Edition this year? Samsung has taken some unexpected steps within the S-series this year. Although flagship smartphones normally only get improved, this certainly wasn’t the case with the Samsung S21.

The S21 adopted various features of the cheaper S20 FE, such as the flat display with Full HD resolution and the plastic back. As a result, the S21 has also been marketed more cheaply than the S20 a year earlier. The first sales results show that Samsung has made the right decision in this regard. The pre-order sales of the S21 series went significantly better than the year before.

Now that the Galaxy S21 is cheaper than the S20, the question remains; what features will the S21 FE get. Which features will Samsung be able to omit to still deliver the same high-end experience, at a lower price level? 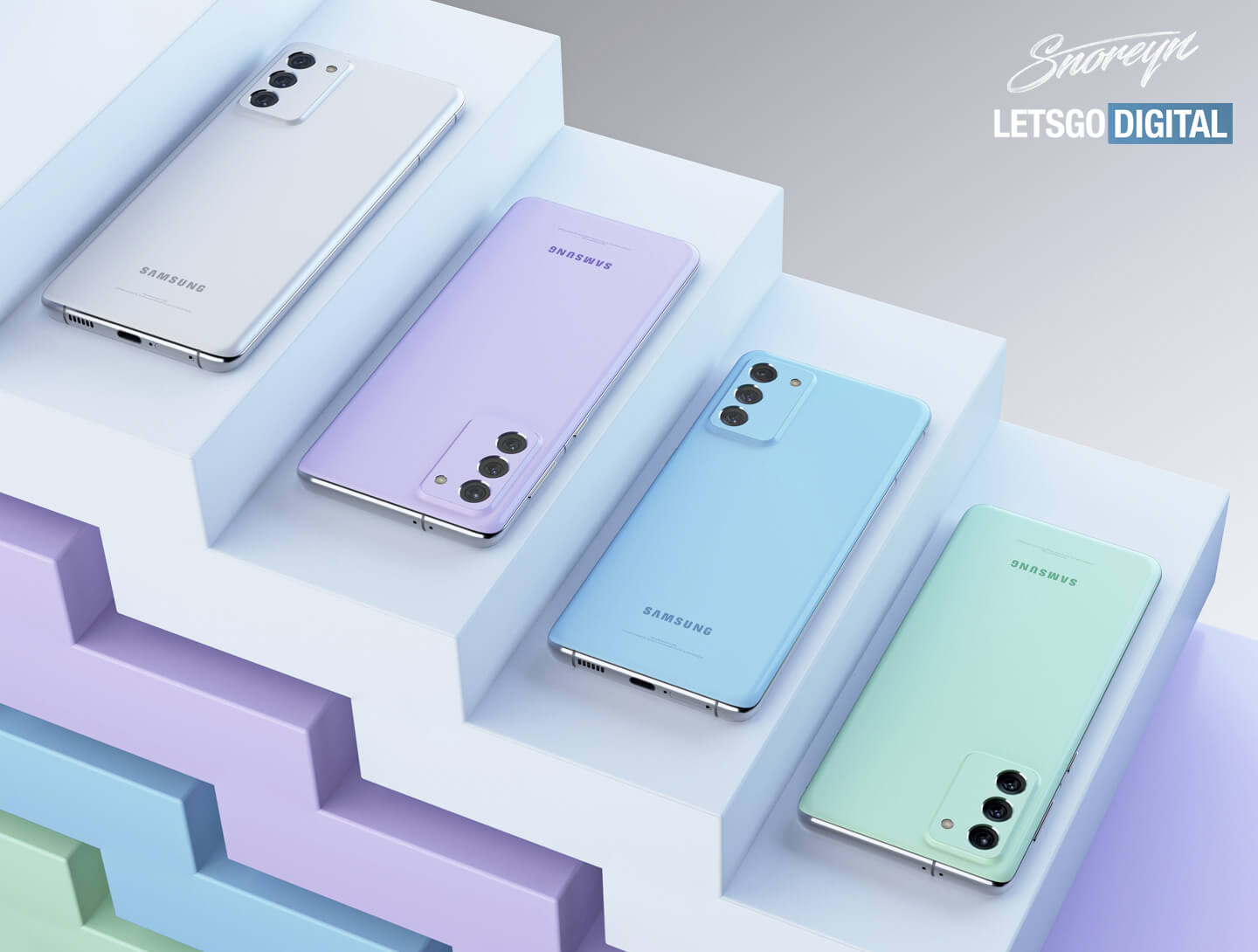 For the time being, the specifications of this new model are still unknown. But now that the Samsung S21, S21 Plus and S21 Ultra have been officially announced, we can already look carefully ahead to the fourth model.

To give a first impression of the possible design of the Samsung Galaxy S21 FE, in-house graphic designer Giuseppe Spinelli, aka Snoreyn, made a series of product renders. The 3D images are designed based on the already available S21 and S20 FE and are cast in a matching Samsung style.

With the Galaxy S21 FE, Samsung will want to appeal to successful youngsters. That is why we have opted for four stylish colors with a light color palette; gray, blue, purple and green. The previous model appeared in no less than 6 sparkling colors, so you can assume that at least several color options will be offered.

Of course, the new Fan Edition is also made dust and waterproof (IP68), as you would expect from a high-end phone. Furthermore, the SIM compartment will most likely be moved to the bottom of the device, as is the case with the other S21 models. Audio enthusiasts will unfortunately have to do without a 3.5mm headphone jack. 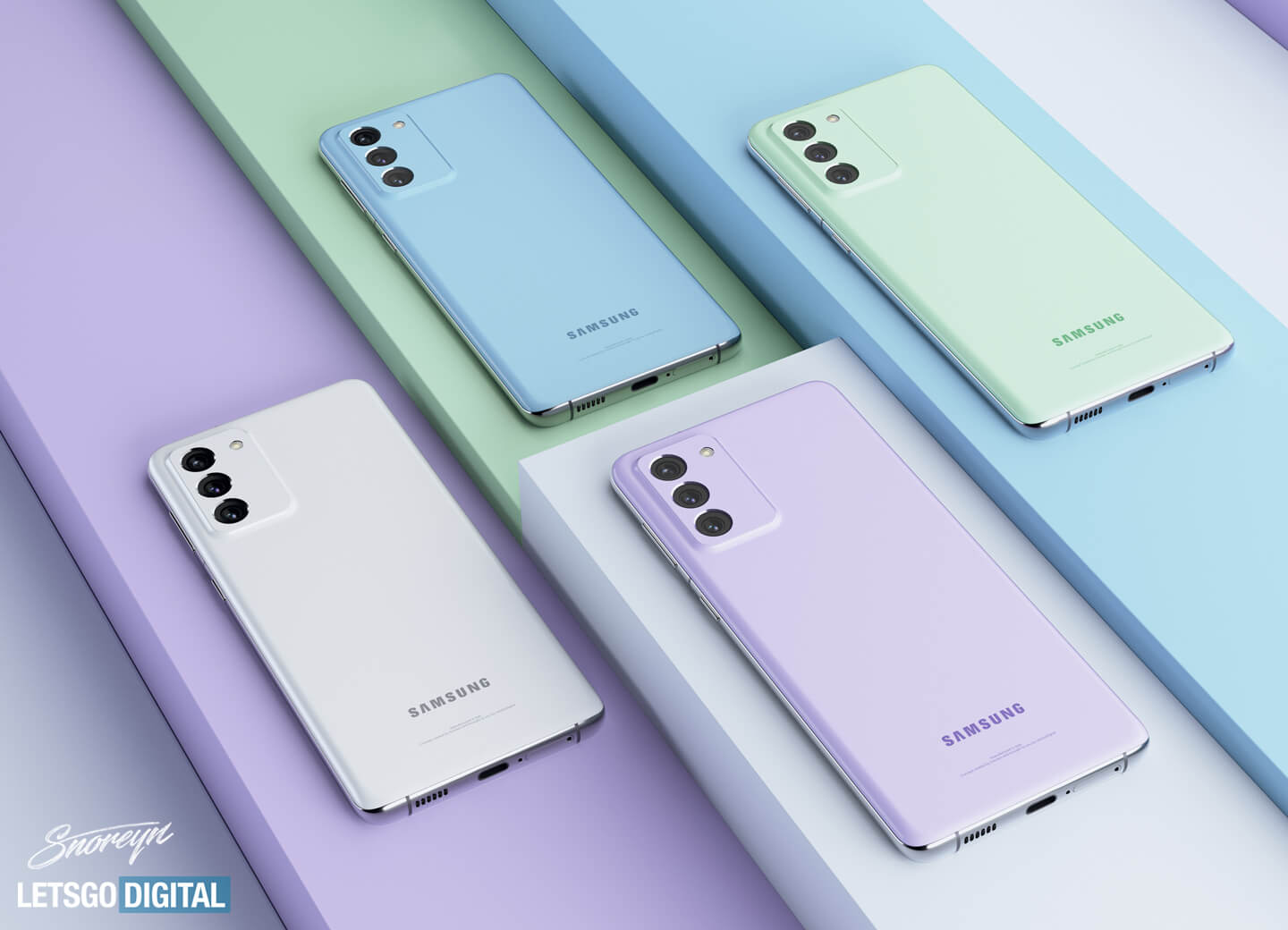 What is immediately noticeable about the Samsung S21 FE, designed by Giuseppe, is the camera system. The three available S21 models are characterized by a specially designed camera, where the camera is merged with the frame on the side and top of the device. To make the Fan Edition cheaper, we decided not to implement this design twist in the S21 FE.

The design of the triple camera is comparable to that of the S20 FE. We have chosen to keep the color of the camera module the same as that of the housing. Last year, the camera island got a dark color scheme with a harder contrast, regardless of which color variant you chose.

In terms of camera specifications, we do not expect any major differences compared to last year. After all, the camera of the S21 and S20 is also largely identical to each other. The FE model was equipped with a 32MP selfie camera. The triple rear camera consists of a 12 megapixel wide angle and ultra wide angle camera and an 8 megapixel telecamera with 3x Hybrid zoom and 30X Space Zoom. The S20 FE can record videos in 4K resolution and played back in 8K.

The S21 FE will probably have the same camera configuration as the S20 FE. Additional functions are made possible by the renewed Android 11 OS, in combination with the One UI 3.1 interface. Think of the new features such as Object Eraser and Multi Mic recording, as well as an improved Single Take function and touch autofocus. 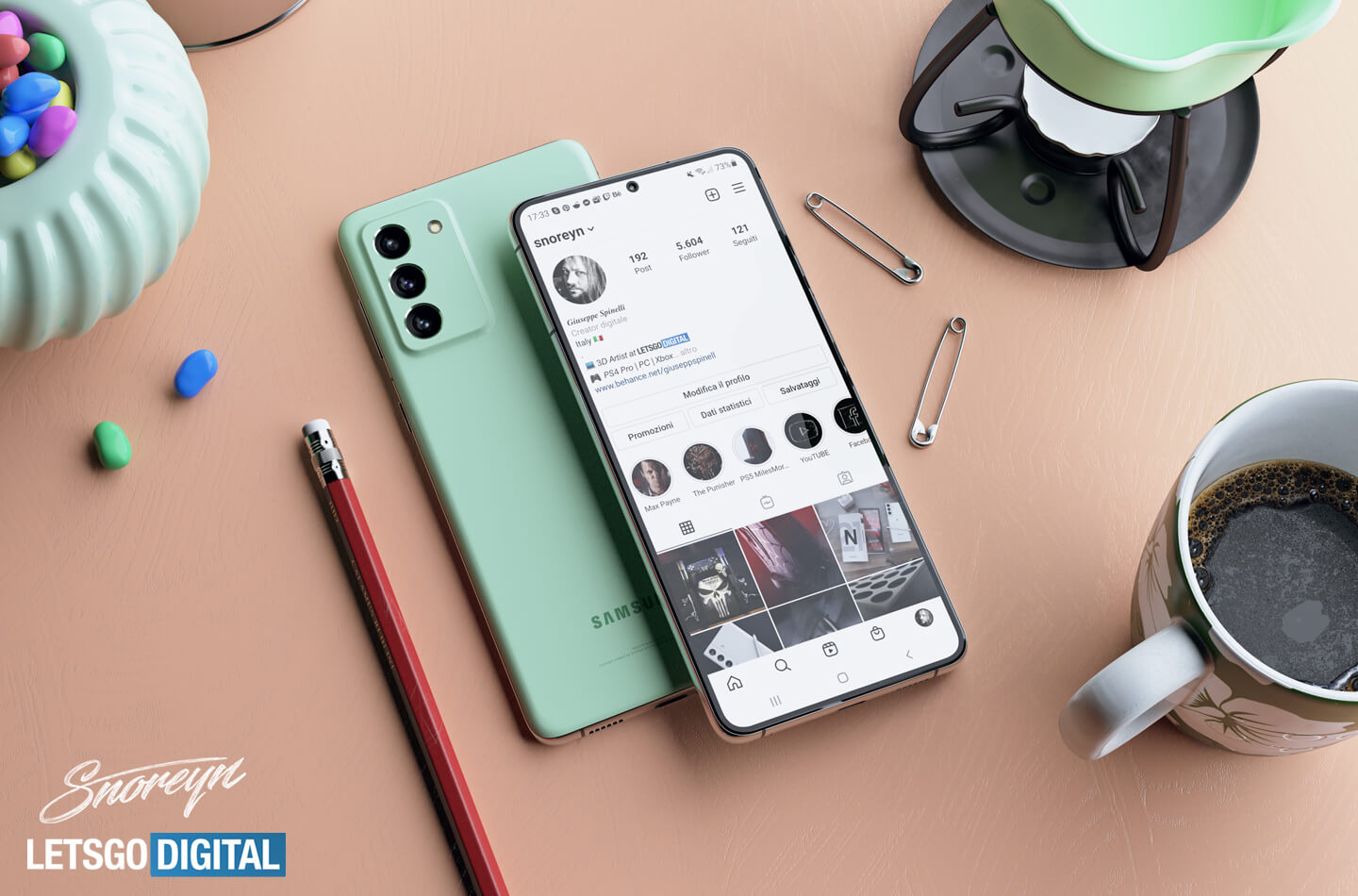 The screen sizes of the S21 models have remained the same as last year. The S21 is the smallest with its 6.2 ” display, followed by the S21 Plus with its 6.7” display. The S21 FE will probably feature a 6.5 ”Full HD+ display again – meaning it will be positioned between the base and Plus model in terms of size.

The screen will most likely support the high 120 Hertz refresh rate, but HDR support will likely be lacking. Logically, a punch-hole camera system will again be chosen to accommodate the selfie camera.

Presumably the same Exynos 2100 will be used as with the other S21 models. However, less RAM will probably be built in, but two options may again be offered: 6GB and 8GB RAM. The storage capacity of 128GB / 256GB will probably be maintained.

It will be interesting to see whether the Samsung Galaxy S21 FE will have a memory card slot. With the other S21 models, Samsung has chosen to omit the microSD compartment, so that the options for expanding the memory are limited to cloud storage. Samsung may keep the microSD memory compartment with the Fan Edition, although it is just as likely that it will be left out for cost reasons.

Furthermore, it is in line with expectations that the S21 Fan Edition will also have an extra large battery. After all, this was also one of the strong features of the previous FE model. The S20 FE was equipped with the same size battery as the S20 Plus; 4500 mAh.

If Samsung continues this line, it would mean that the S21 FE will be equipped with a 4,800 mAh battery with support for 25W wired / 15W wireless charging. Since the FE has a slightly smaller screen than the Plus variant, it is likely that this model also delivers a slightly better battery life. The 4,800 mAh battery of the S21 Plus guarantees a battery life of more than 12 hours.

Probably the charger will not be included, the same goes for the earplugs. Samsung has already started this trend with the other S21 models. The official reason for this is that Samsung wants to counteract eWaste. By not supplying a charger / earplugs the environment can be saved.

Unfortunately, Samsung does not leave this decision to the consumer. If the environment is the main driver, why not offer the phone both with and without a charger for the same amount of money – as Xiaomi is doing with the Mi 11. At the end, many do want to purchase a fast charger which now needs to be packaged separately, be shipped separately etc. The environmental benefits will therefore be very limited. 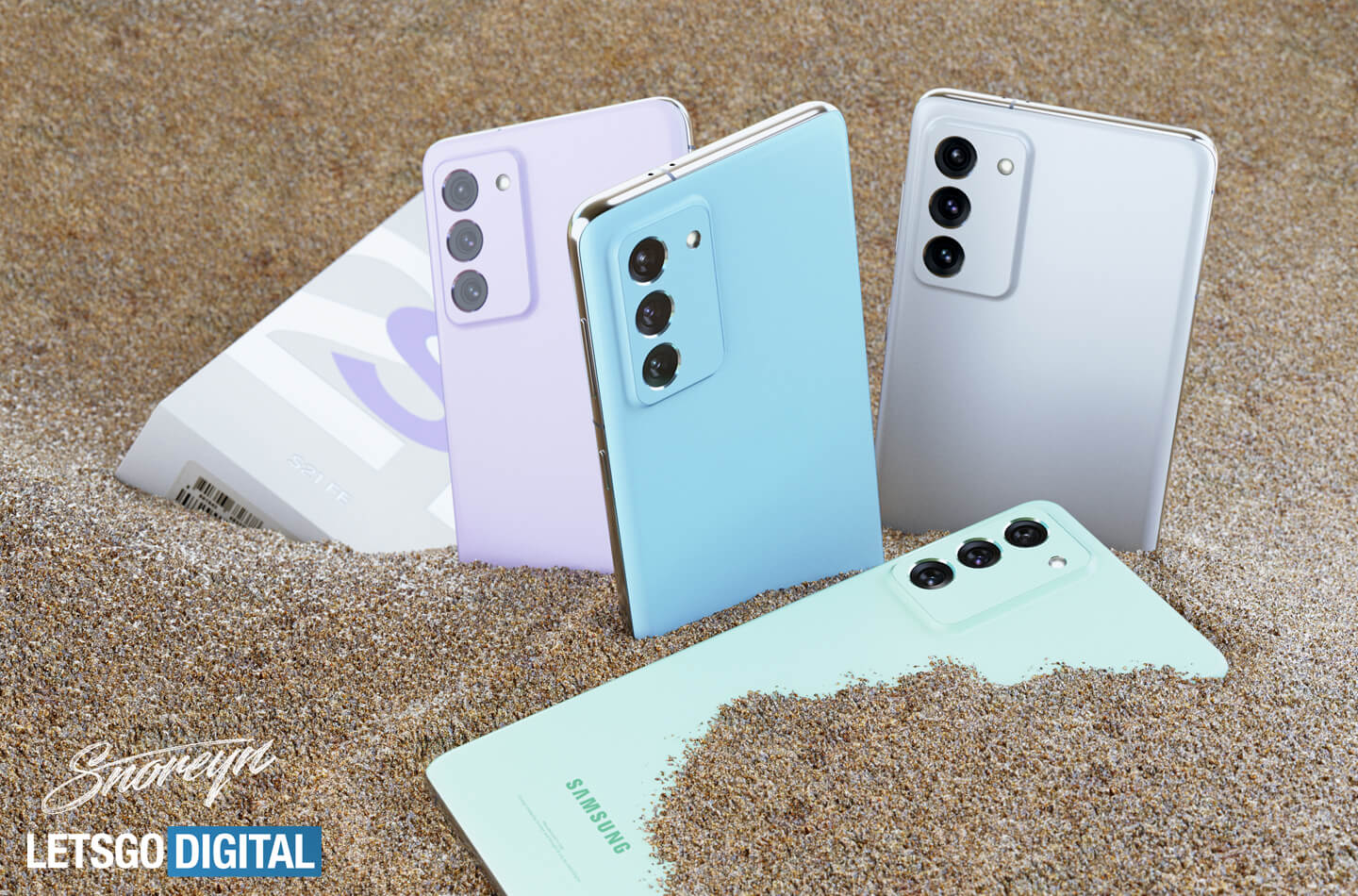 How much will the Samsung Galaxy S21 FE cost?

The Samsung S20 FE 5G (128GB) carried a suggested retail price of € 750 last year, a 4G model was also released for € 650. The S21 models are cheaper than last year and, moreover, are only available with 5G. Most likely, the S21 FE will also be released exclusively as a 5G model, after all, 5G is the future and it will replace 4G in the coming years.

The basic model within the 2021 S-series is available for a starting price of € 850 (128GB). In six months’ time, the S21 will undoubtedly have dropped in price, making it plausible that the Galaxy S21 FE will also be marketed more cheaply than last year. This way, Samsung can prevent the Fan Edition from being even more expensive at launch than the basic model. You may be able to buy the new model for about € 650. By keeping the entry-level price the same as last year, but this time with 5G, the S-series will remain accessible to a wide audience.

For the already available S21 models, Samsung has chosen not to include a charger or earplugs in the sales package. This new trend, initiated by Apple last year, does not appear to have had a negative effect on sales numbers. It is therefore certainly not inconceivable that the new Galaxy S21 FE will also be delivered without a charger and earplugs.

Samsung will probably offer the Fan Edition in a range of standard colors. The S21 Plus and Ultra can also be purchased in various custom colors, which can only be ordered on request via the Samsung website. However, this option is not available for the base model, so it is unlikely that custom colors will be designed for the S21 FE either.

Nevertheless, different color variants will undoubtedly be made available. In addition, Samsung will undoubtedly announce a range of matching accessories, including phone cases made of a variety of materials such as silicone, fabric and leather.

The fourth model in the S-series will probably be announced around September, before then we first expect a new Galaxy Note smartphone. In the coming months, more details will undoubtedly be known about the technical specifications and design of the new Samsung Galaxy S21 FE. 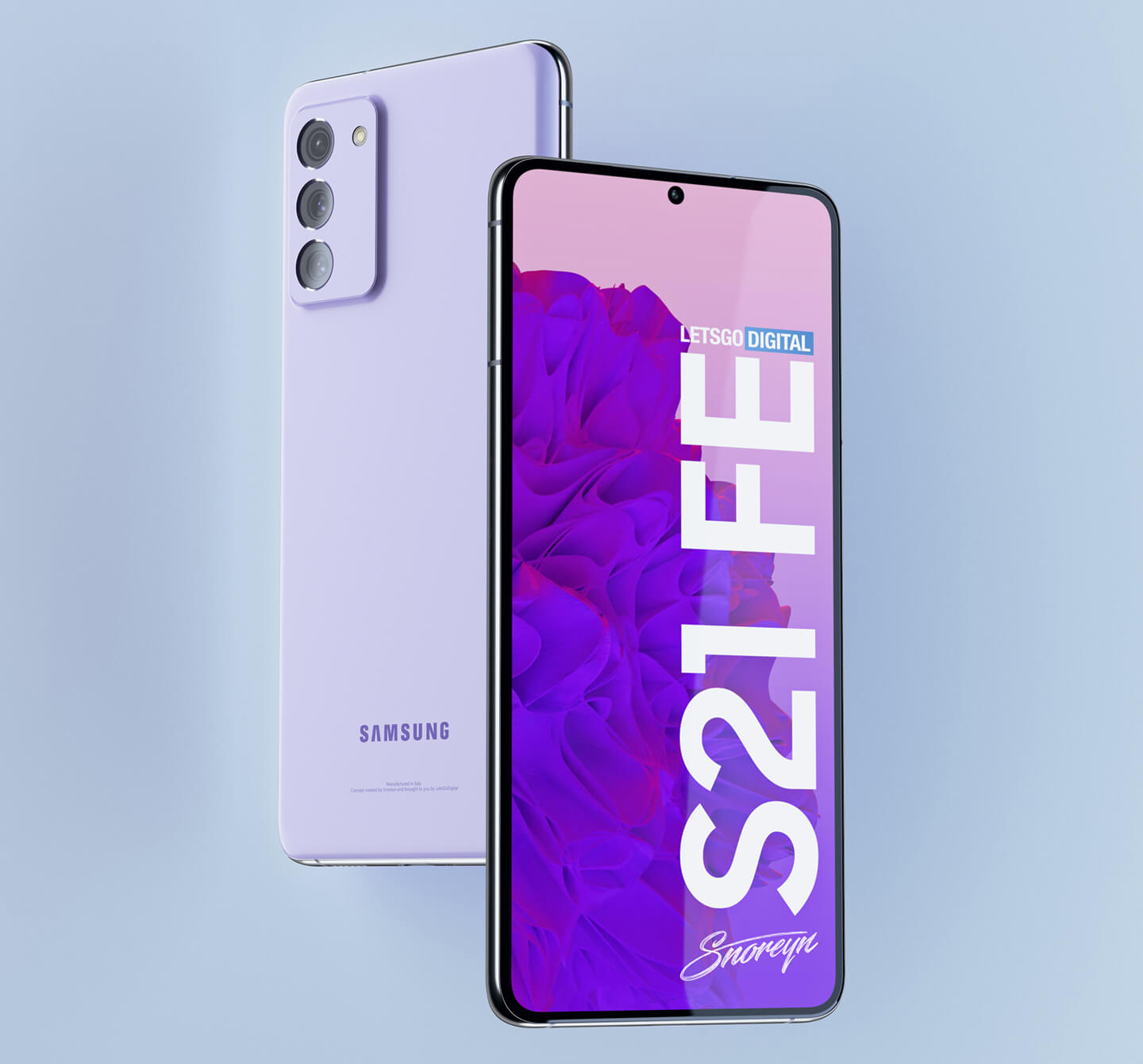 Note to editors : The product images in this publication are created by in-house graphic designer Giuseppe Spinelli (aka Snoreyn). The presented concept renders are for illustrative purposes only. The images are copyright protected. Feel free to use the pictures on your own website, please be so respectful to include a source link into your publication.