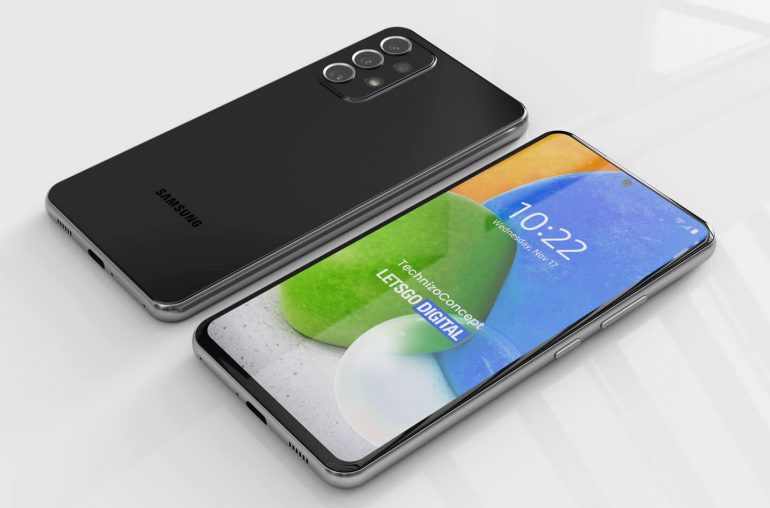 The Galaxy A73 will be an advanced A-series smartphone from Samsung with a large AMOLED display and a 108MP quad camera but without a 3.5mm jack.

Samsung introduces dozens of smartphone models every year. In 2022, budget and mid-range devices from the Galaxy A series will be named Ax3. Like the cheap Galaxy A13, the slightly more expensive Galaxy A33 and the mid-range Galaxy A53. The Samsung Galaxy A73 will be one of the most advanced A-series models. This mobile phone is expected in the second quarter of 2022. This time Samsung will probably only release a 5G model. Remarkably, the current Galaxy A72 is only available with 4G.

Based on all the rumors, graphic designer Parvez Khan, aka Technizo Concept, has created a series of 3D product renders of the expected Samsung Galaxy A73 5G. In terms of design, this mid-range smartphone is very similar to its predecessor. Nevertheless, it is expected that Samsung will make the necessary changes. 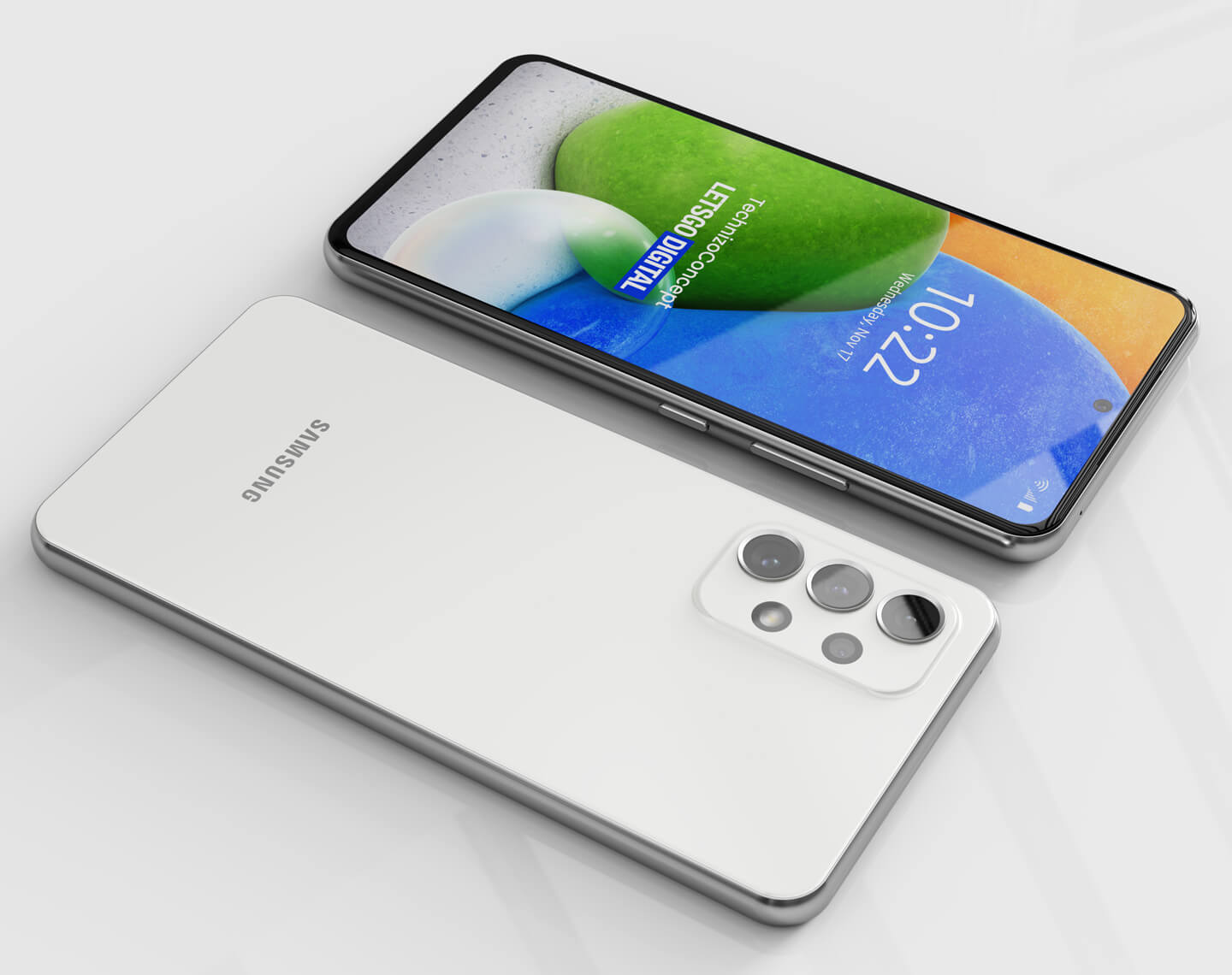 Samsung A73 with renewed display

To start with the front. The phone will most likely be equipped with a flat AMOLED screen. Presumably, a 6.7-inch display with a Full HD+ resolution. The refresh rate may be increased from 90Hz to 120Hz. In addition, the smartphones comes with an in-display fingerprint sensor. The A-series smartphone will have a plastic housing with IP67 certification – in other words, the phone is dust and waterproof.

Last month, the Korean news medium The Elec reported that Samsung wants to equip the new A-series model for the first time with a screen from a Chinese manufacturer. This allows the company to save on costs, which is necessary to cope with the increasing competition from Chinese brands.

Potential display suppliers are CSOT and BOE. Samsung would have asked both manufacturers to make an OLED panel, whoever offers the best solution will be allowed to manufacture the displays for the A73. The Chinese CSOT already supplies Samsung displays for the Galaxy M series.

The Samsung Galaxy A73 5G will most likely be equipped with a punch-hole selfie camera, with a central placing. It is still unknown whether Samsung will again opt for a 32MP front camera or whether it will opt for a 12MP front camera – as will be the case with the Galaxy S21 FE.

We also expect the necessary changes at the top and bottom of the device. Where the SIM card slot of the Galaxy A72 was accessible from the top, it will most likely be moved to the bottom on the A73. This space is freed up because Samsung will omit the 3.5mm headphone connection. Unfortunately, that will also apply to the Galaxy A53 and the Galaxy A33. The new A-series model will probably still offer the option to use a microSD memory card – unlike the S-series.

Furthermore, the bottom will accommodate a USB Type-C connection, a microphone and a speaker. As usual with Samsung smartphones, the volume keys and the power button are located on the right side. The left side remains free of buttons and connections.

The device will run on the Android 12 OS in combination with the One UI 4 user interface. Samsung provides its A-series models with 3 years of software updates and 4 years of security updates. As for the chipset, the Samsung A73 5G may be powered by the Qualcomm Snapdragon 750G – which is also used in the Galaxy A52 5G. There will probably be several memory variants offered: 6/8GB RAM and 128GB/256GB ROM. 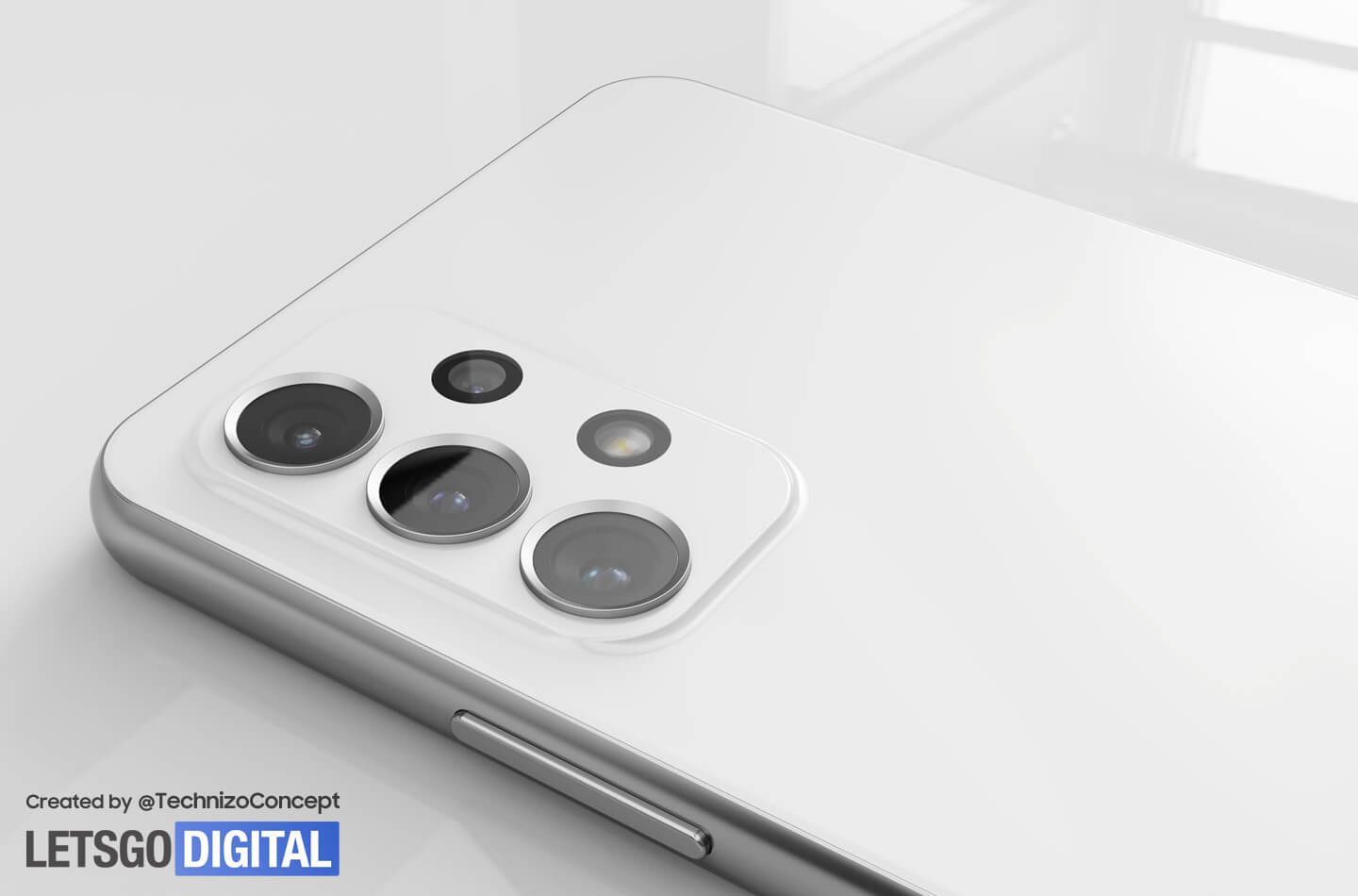 Samsung Galaxy A73 with 108MP camera

Some time ago, Garyeon Han reported via Twitter that the Galaxy A73 will be equipped with a 108 megapixel image sensor. It would be the first time that a mid-range Samsung phone is equipped with such a high-resolution camera.

For the time being, only the high-end models of the brand are equipped with a 108MP camera, such as the Galaxy S20 Ultra and the Galaxy S21 Ultra. Most likely, Samsung will use a different sensor for the A73. It is expected that Samsung will use the ISOCell HM2 sensor. This is a relatively small 1/1.52″ sensor with 0.7μm pixels.

Apart from the main camera, there is no information about the other three cameras of the Galaxy A73 yet. It is quite possible that these will remain unchanged. To get an idea, the Galaxy A72 is equipped with a 64MP main camera with OIS, a 12MP ultra-wide camera, an 8MP telephoto camera with OIS and a 5MP macro camera.

Since the Samsung A73 sports a large display, the smartphone will also incorporate a large capacity battery. It will probably be a 5,000 mAh battery with support for 25W fast charging. Whether Samsung will provide a charger with the A-series phones next year remains unknown for the time being. 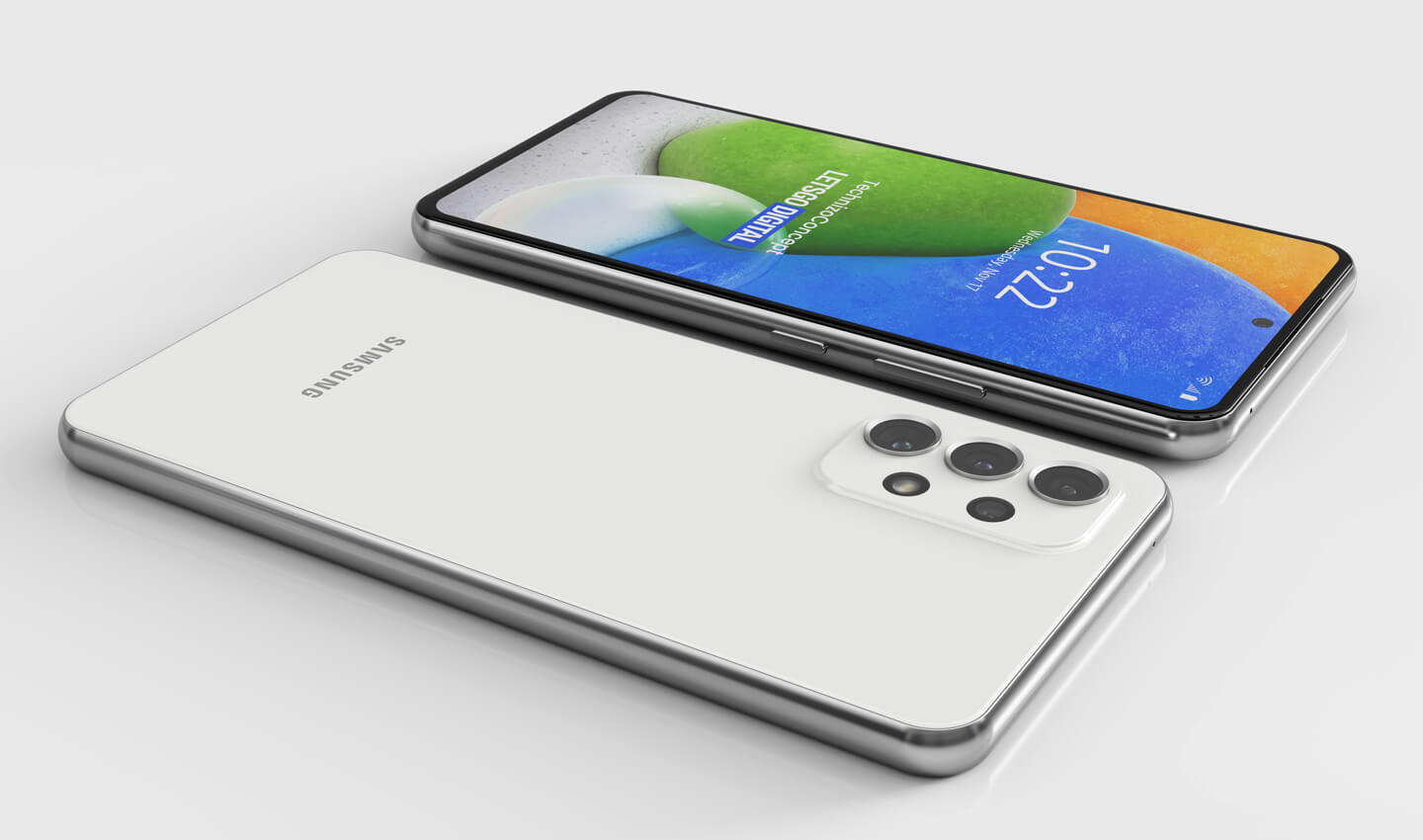 When is the Galaxy A73 expected?

Korean media reported earlier this month that production of the Samsung Galaxy A73 will not start until the second quarter of 2022. This means that the new model will arrive later than its predecessor, the A72 was introduced in March – at the same time as the A52. Production of the A33 and A53 will start in the first quarter of 2022, so it is expected that these devices will be released earlier.

The Galaxy A7x is usually significantly less popular than its cheaper brother, the Galaxy A5x. Think for example of the A52 / A72. This will not change in the near future either. Korean media reported earlier this month that Samsung plans to manufacture 28 million Galaxy A53 5G smartphones, while only 3.4 million units of the A73 5G will be manufactured.

No information is known about the price for the time being, the Galaxy A72 4G had a suggested retail price of €470 at the time of launch. The new model will likely go on sale for around the same price. In the coming months, more will undoubtedly become known about the Samsung A73 5G. 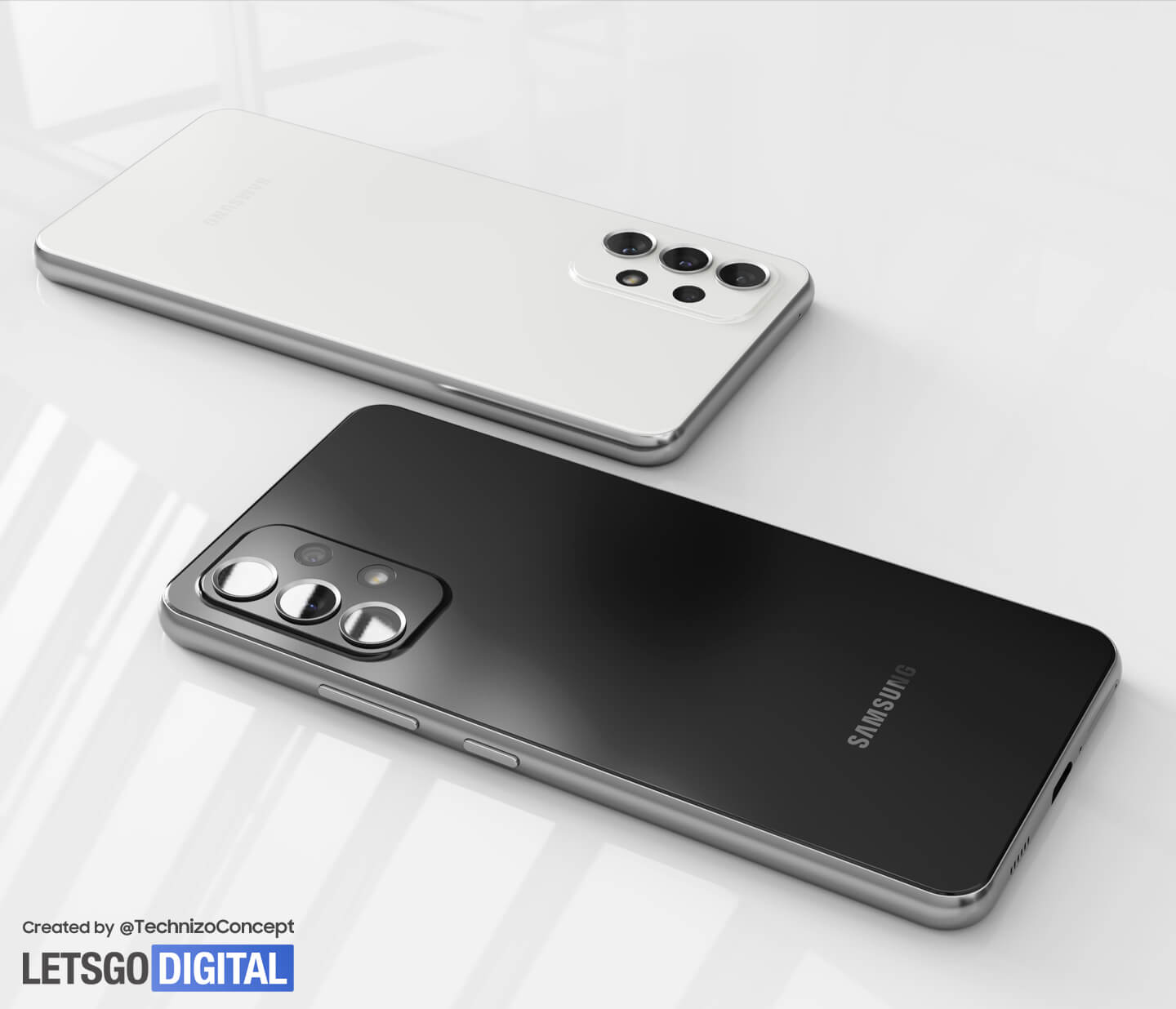 Note to publishers :  The 3D product renders of the Samsung Galaxy A73 5G are created by Parvez Khan, aka Technizo Concept in collaboration with LetsGoDigital. This product is not for sale. You can use the copyrighted images for your own website, YouTube and/or social media channels, please be so respectful to include a clickable source link into your publication.