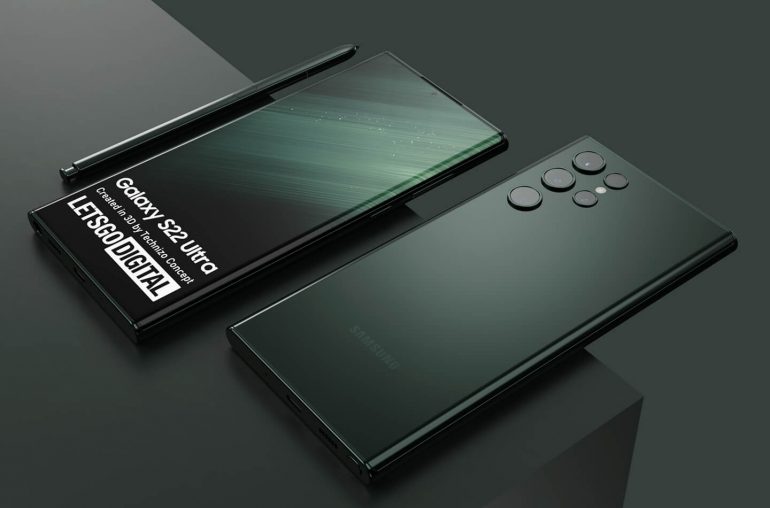 The Samsung Galaxy S22 series are expected to be released in February 2022. The Galaxy S22 Ultra will be the new top model. It has been known for some time that this smartphone will appear in four different colors. In addition to the colors black, white and red, Samsung is also working on a green variant. For the time being, however, it was unknown what the exact color shade would be.

The reliable Ice Universe is now changing this. On Twitter, Ice shared the exact color code #27423a. The dedicated designers from LetsGoDigital immediately started working with the new information to create a series of product renders of the Samsung Galaxy S22 Ultra green. This color code is also referred to as Burnham Green by color specialists. 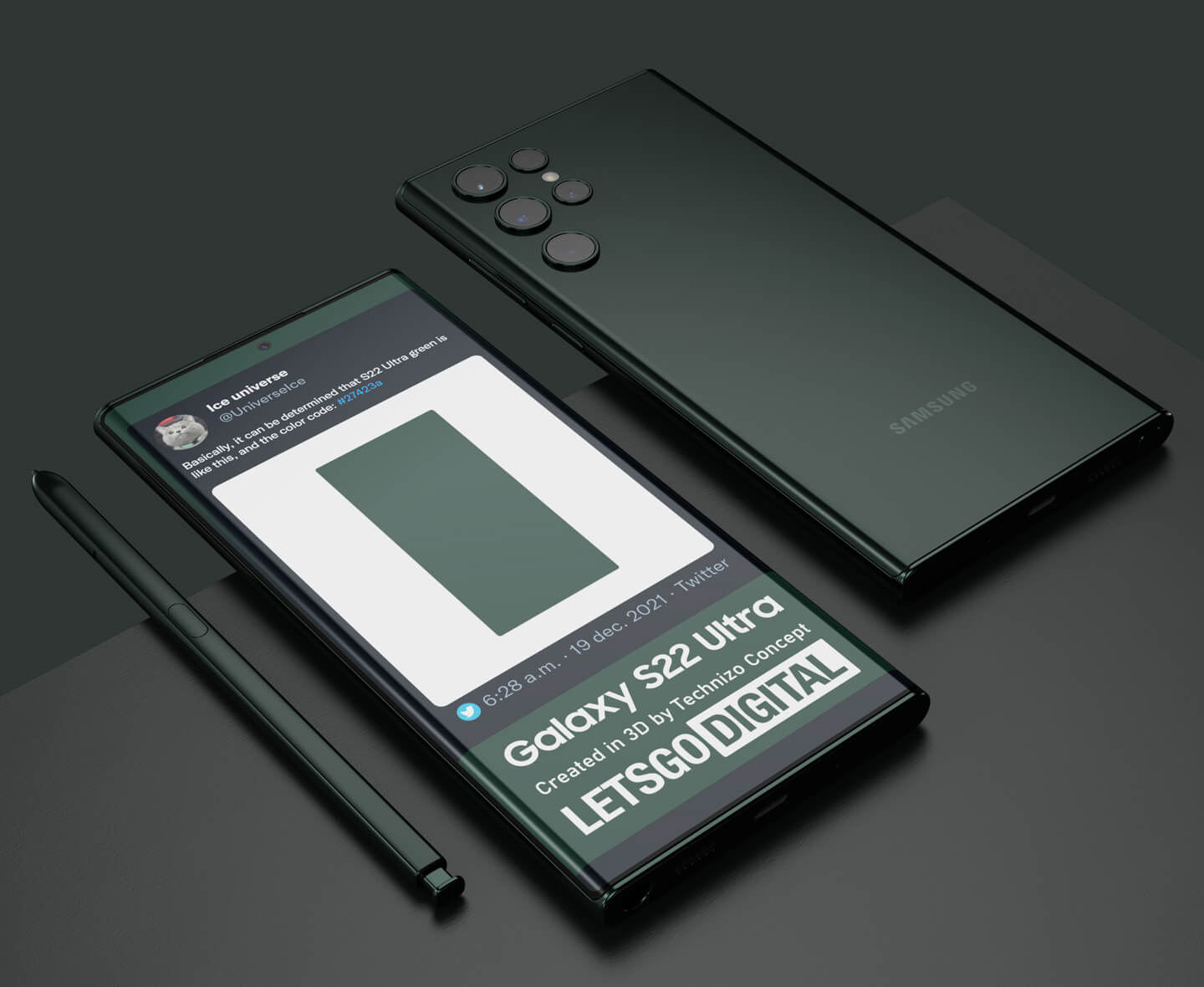 It is not the first time that Samsung has introduced a green Galaxy S series smartphone. Consider, for example, the Prism Green of the Galaxy S10. The Galaxy Z Fold 3 introduced in mid-2021 is also available in dark green, called Phantom Green. The latter turns almost black depending on the lighting conditions. The green Galaxy S22 Ultra 5G will be slightly lighter than the Phantom Green Z Fold 3 and at the same time darker than the Prism Green S10.

For the time being, it remains unclear whether the green variant will be released worldwide. The colors black, white and dark red are often mentioned in the same breath. These will probably be the standard colors. In addition, there might be another color in the pipeline, although details are still unknown.

The smaller Galaxy S22 and Galaxy S22 Plus are also expected in green – in addition to black, white and rose gold. However, it is in line with expectations that this green color will differ slightly compared to the Ultra model. The flagship is usually released in a dark color palette, which also works well with business users. The base model will probably appear in a slightly lighter shade of green.

Another differentiation can be found in the finish. Where the basic and Plus model will have a glossy finish, the top model will be provided with a matte finish. The preference for glossy or matte is very personal. Nevertheless, it can be said that a glossy finish is usually more sensitive to fingerprints. You can also see scratches faster on a shiny back panel. 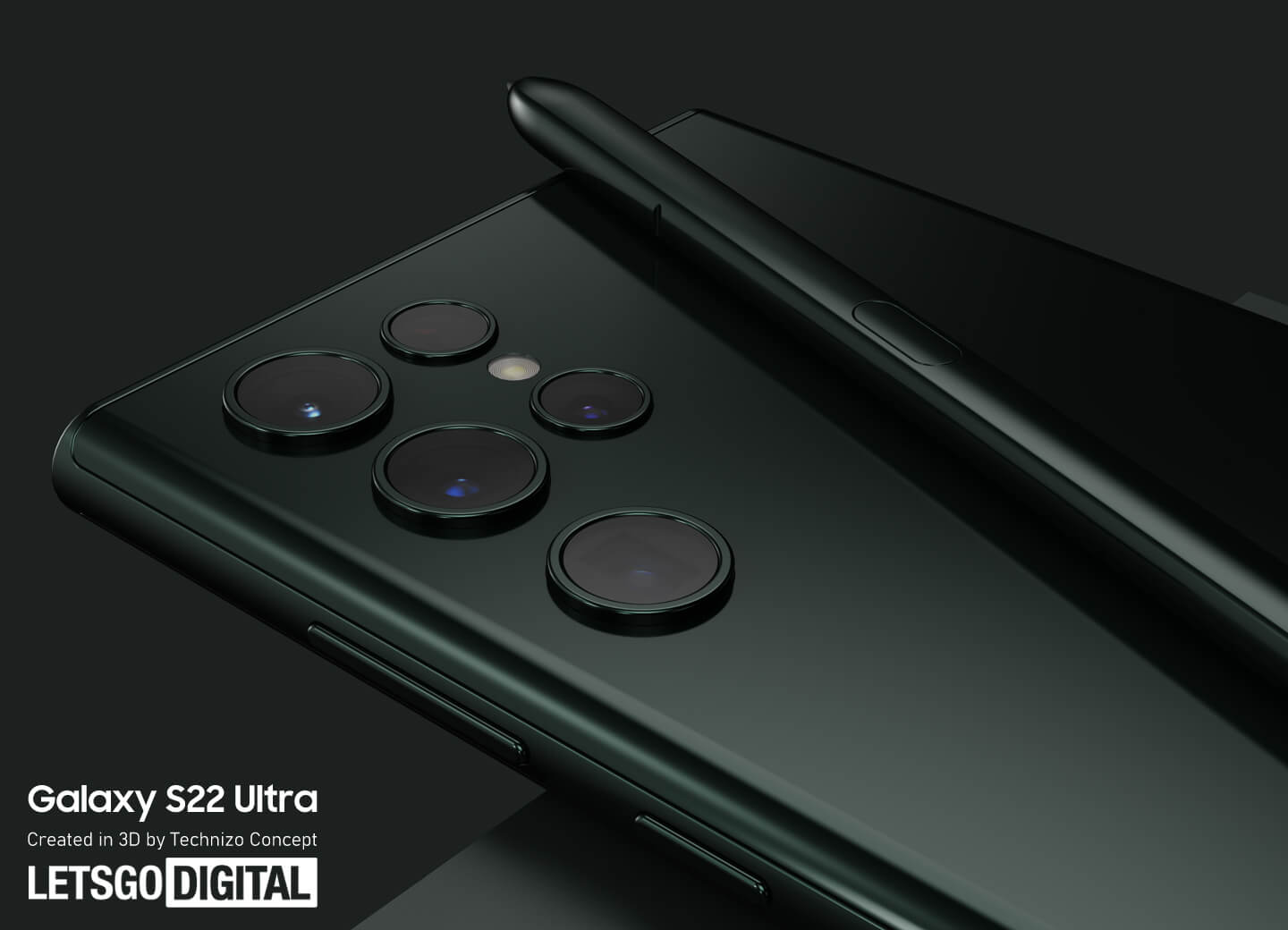 It is known that the top model will not only appear in other colors. The device also gets a different design compared to its two cheaper brothers. In October, LetsGoDigital already revealed that the flagship will be equipped with a water drop camera design. In addition, the phone will have less rounded corners and an S Pen compartment built-in, as we know from the Galaxy Note line-up.

It may also result in Samsung changing the model name. Rumors have been circulating for some time that the Galaxy S22 Ultra will be marketed under the name Galaxy S22 Note. In this way, Samsung can merge the S series and Note series perfectly.

This time, the announcement of the S-series models will not be accompanied by a new set of earplugs. The Galaxy Buds Pro 2 will most likely be introduced in the second quarter of 2022. In August, Samsung is expected to introduce the Galaxy Buds Live 2, along with the Galaxy Z Fold 4 and Galaxy Z Flip 4.

Of course, the Galaxy S22 Ultra / S22 Note is not the only high-end smartphone expected in early 2022. New arriving competitors include the Xiaomi 12 Ultra, the OnePlus 10 Pro and the Oppo Find X4 Pro. In addition, we have the already introduced iPhone 13 Pro Max and Google Pixel 6 Pro to cover the high segment.

Note to publishers :  The 3D product renders of the Samsung Galaxy S22 Ultra Green are created by Parvez Khan, aka Technizo Concept in collaboration with LetsGoDigital. The images are based on the latest rumors. This product is not yet for sale, Samsung is expected to release the S22 series in February 2022. You can use the copyrighted images for your own website, YouTube and/or social media channels, please be so respectful to include a clickable source link into your publication.