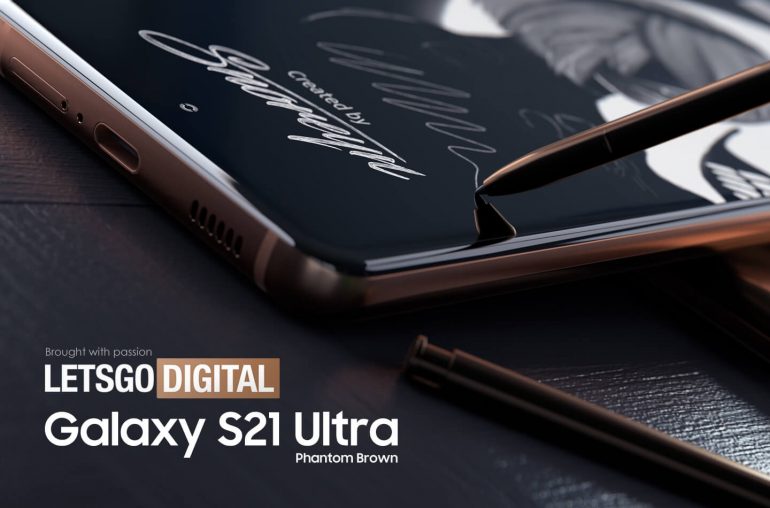 The Galaxy S21 Ultra will be the new top model from Samsung. For the first time, this Galaxy S-series smartphone will support Samsung's iconic stylus pen.

In mid-January 2021, Samsung will release the Galaxy S21 series, with the S21 Ultra (SM-G998) as the new top model. This smartphone will offer improved specs, including an updated camera system that will be completely redesigned, both in terms of design and functionality. For the first time Samsung will make an S-series smartphone compatible with the S Pen (EJ-PG998). This stylus pen has been the main feature of the Galaxy Note series for years and will now also be made available as an optional accessory for the Samsung Galaxy S21 Ultra.

Based on the latest information, LetsGoDigital, together with the talented Italian graphic designer Giuseppe Spinelli has created a new set of product renders of the Samsung S21 Ultra with S Pen. During the launch, this 5G smartphone will be released exclusively in Phantom Black (black) and Phantom Silver (silver) colors. Three months later, a brown and dark blue variant is also expected, so we have decided to incorporate these stylish ‘Phantom Brown’ and ‘Phantom Blue’ color schemes into the images as well. 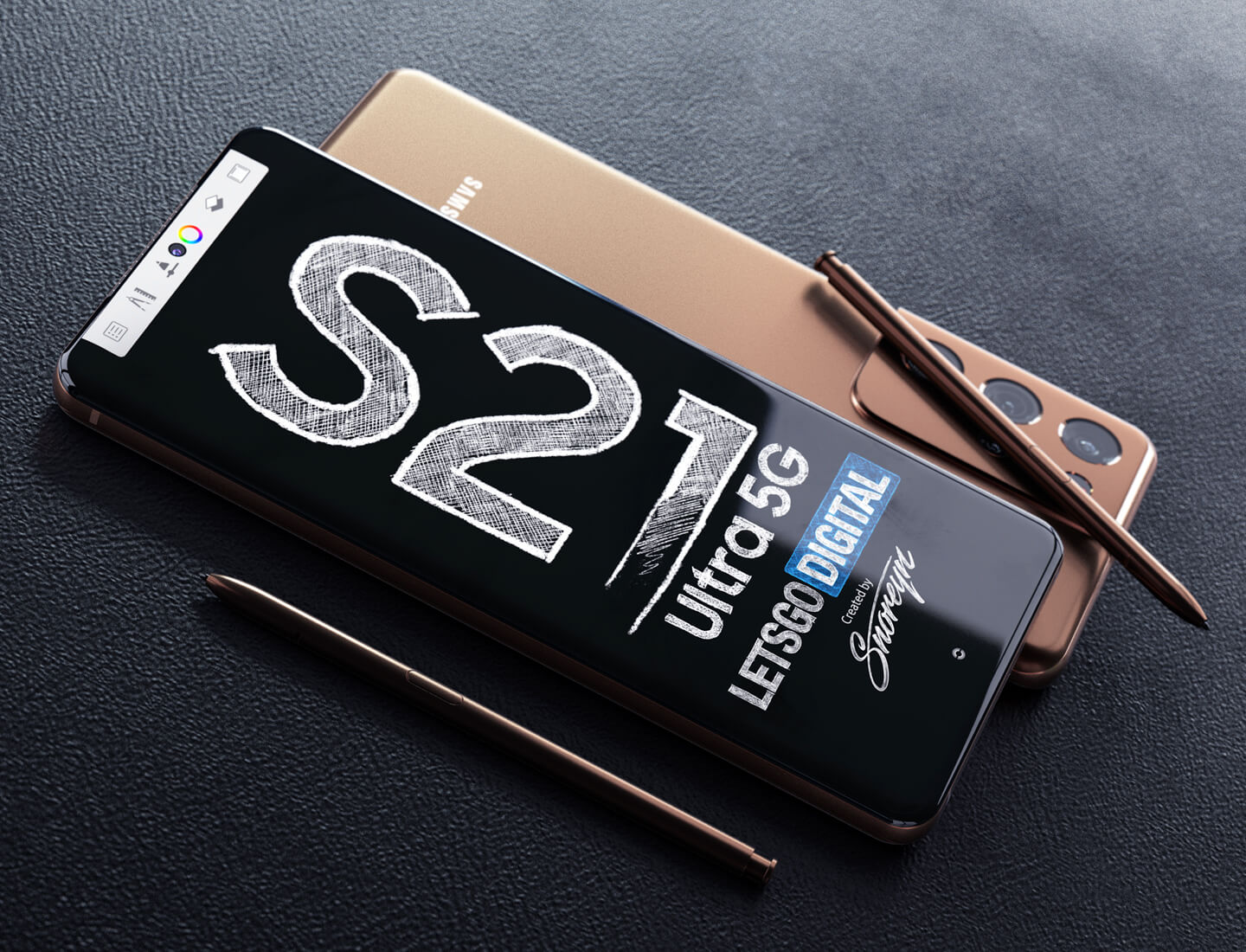 The S Pen is included as standard with the Note models, for the Galaxy S21 Ultra Samsung seems to be taking a different approach. Consumers can decide for themselves whether they see sufficient added value in the S Pen to purchase it as an optional accessory. It is possible that Samsung decides to include a free S Pen during the pre-order period, but no further information is yet known about any pre-order promotions.

What is clear, the Samsung S21 Ultra does not have a stylus compartment – unlike the Galaxy Note smartphones. In order to be able to store the S Pen safely, Samsung will offer various cases in which the S Pen can be stored, as was reported by Roland Quandt on Twitter last Friday.

At least two cases are expected, a Samsung Silicone Cover and a Samsung Clear View Cover. Both optional accessories will be offered in two variants. One with the option to store the S Pen and the other without an S Pen compartment – comparable to the existing variants. 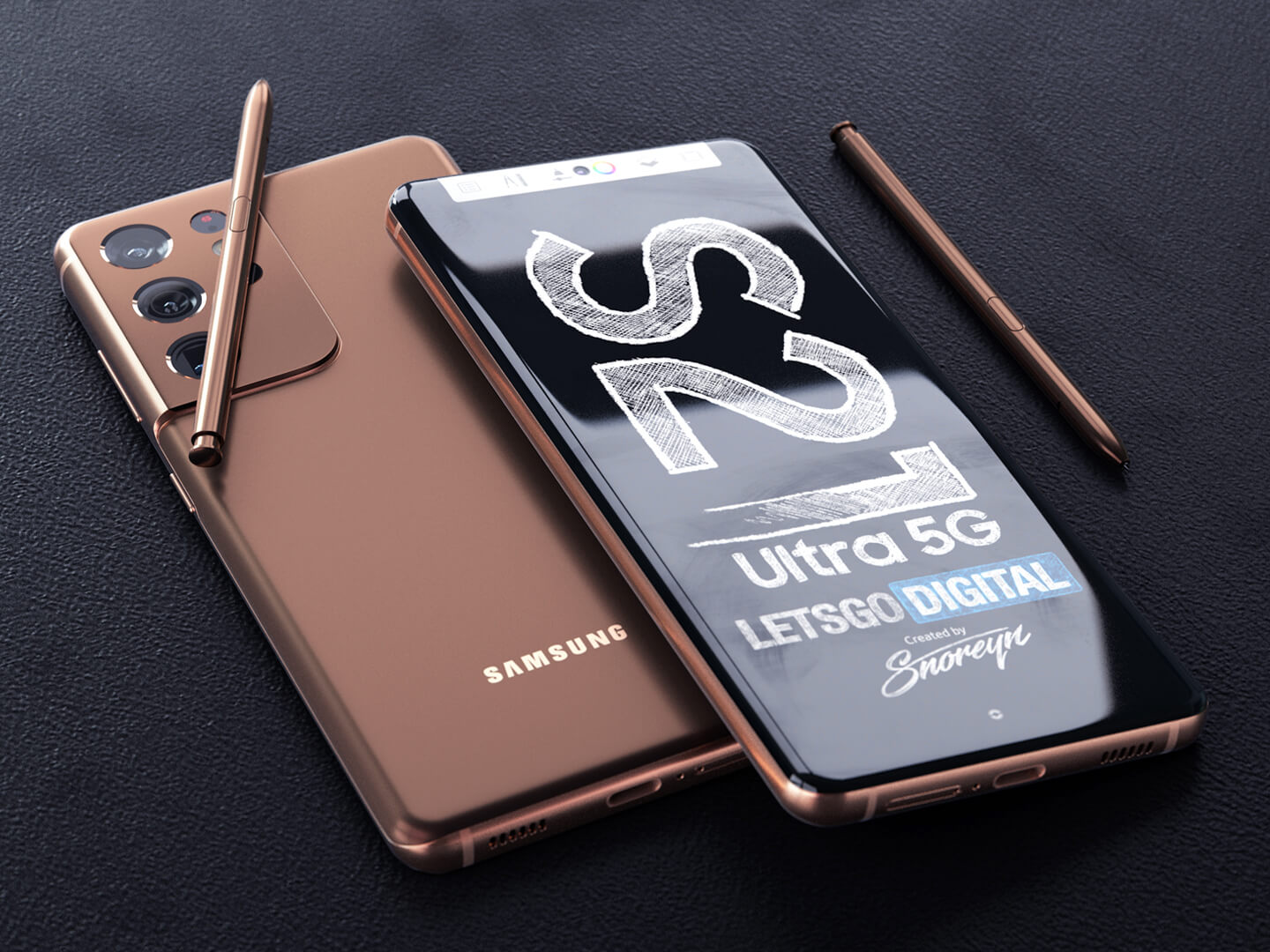 Evolution of the Samsung S Pen

In the second half of 2011, Samsung released its first smartphone with S Pen; the Galaxy Note (N7000). This phone had a 5.3-inch display – a size that we can hardly imagine today. At the time, however, it was a relatively large screen, which is why this device was also called a phablet – a cross between a phone and a tablet.

The Galaxy Note immediately became a big sales success for Samsung. Since then, the South Korean manufacturer has released a new Note smartphone every year. The stylus pen has been refined time and again and the number of compatible applications has also increased significantly over the years.

Since the introduction of the Galaxy Note 5, the S Pen also looks like a real pen. Two years ago, Bluetooth functionality was added, enabling users to use the stylus to control your smartphone remotely, for example for taking photos. Many Note users now consider the stylus pen an essential part of their smartphone. 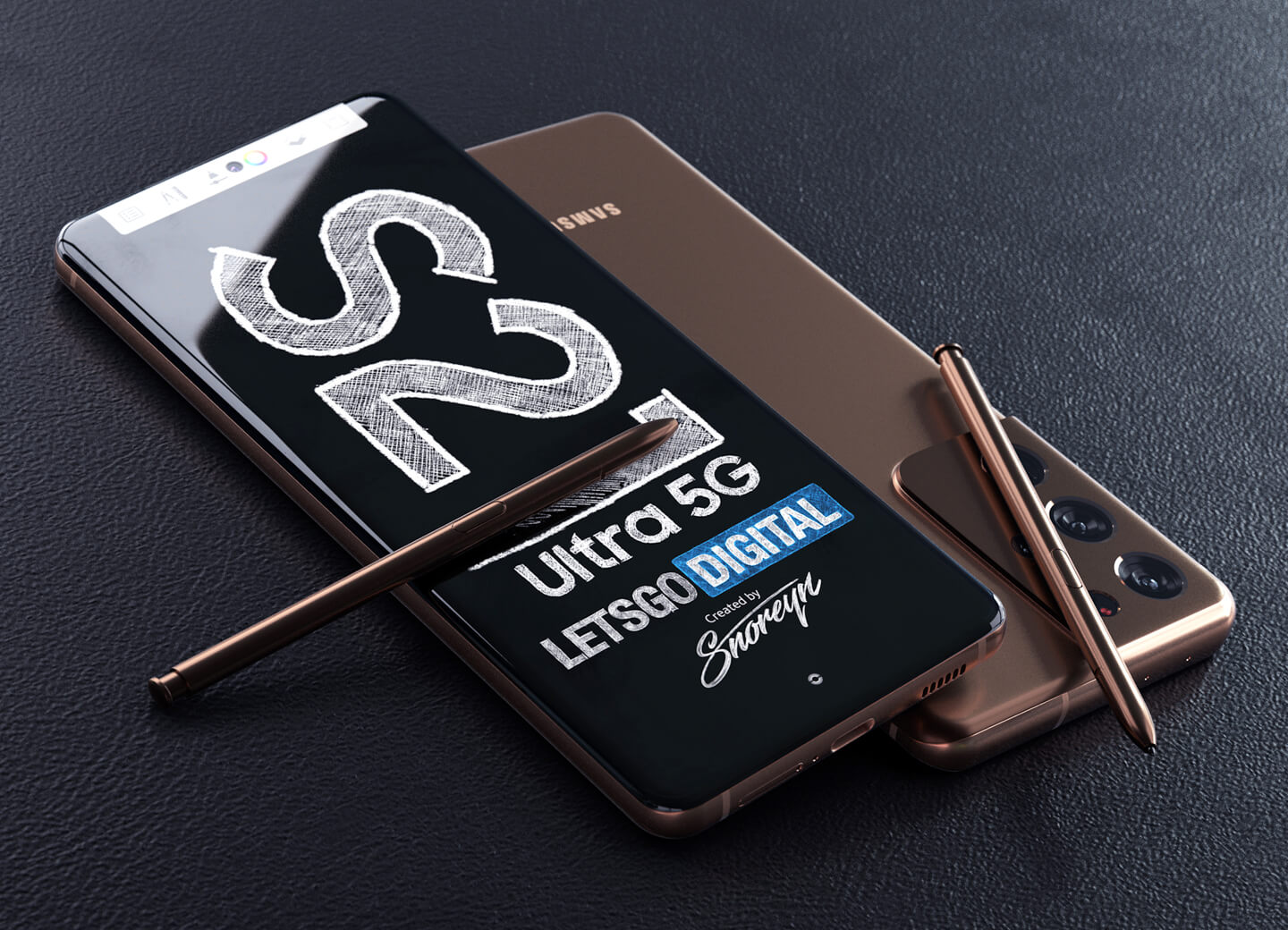 The S Pen for the Samsung S21 Ultra carries model number EJ-PG998. For comparison, the Note 20 Ultra is the EJ-PN980. The last four digits refer to the model number of the smartphone.

Presumably, the S21 Ultra’s Bluetooth S Pen offers the same functionality as that of the Note 20 Ultra. This stylus has been improved in several ways, the main feature of which is the extremely low latency of only 9 milliseconds.

Thus, the input delay is no longer felt, making writing with the stylus feel even more natural than before. Numerous other functions were added, including new Air Actions and it is also possible to easily convert handwritten text to typed text.

Incidentally, stories have been circulating for some time that Samsung wants to cancel the Galaxy Note series. Now that the first S-series smartphone with S Pen compatibility will be released early next year, there are again rumors that Samsung will no longer release a Note smartphone in 2021. But no worries; LetsGoDigital has recently learned from a reliable source from Korea that a new Note will appear in 2021! 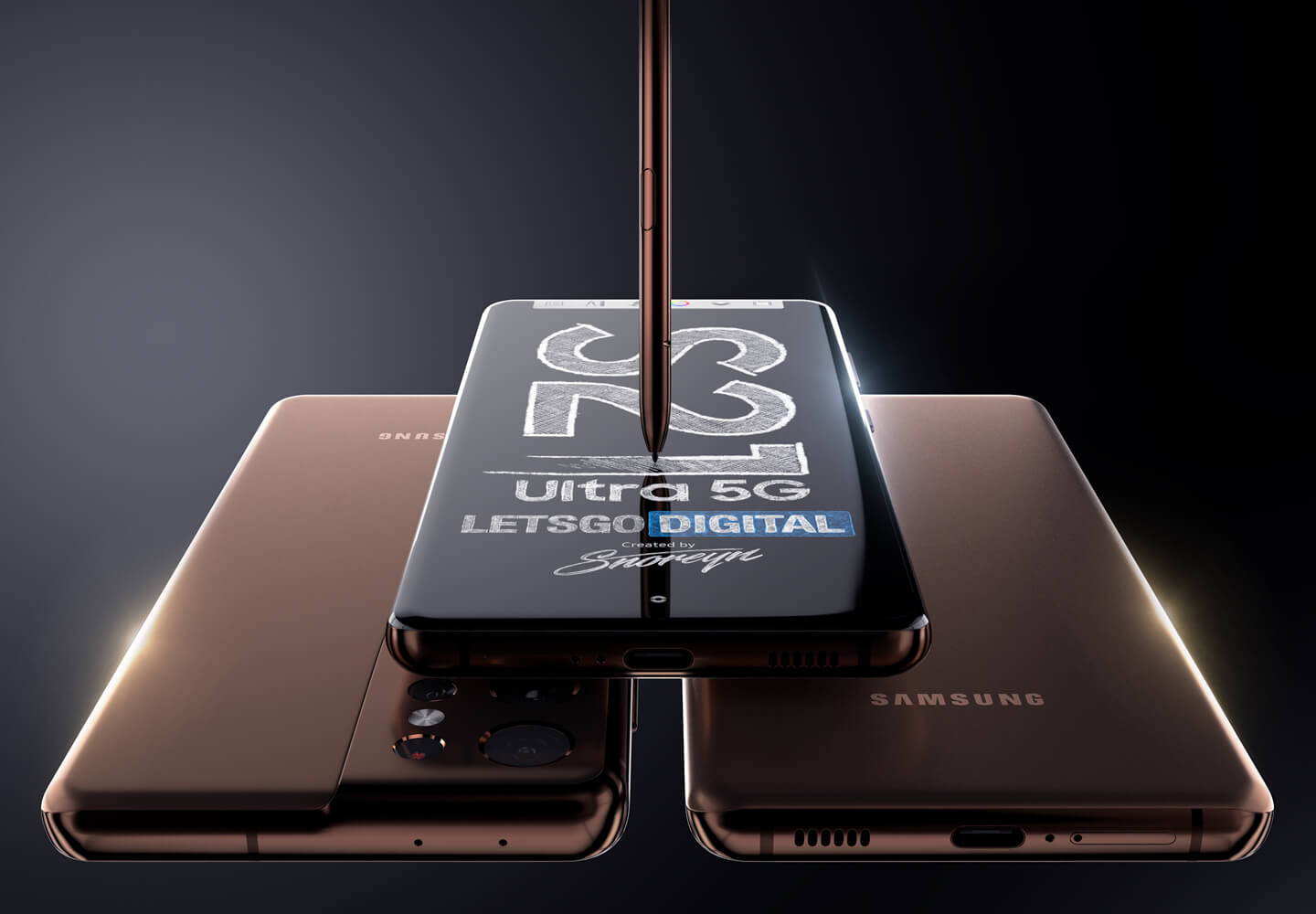 The Samsung S21 Ultra is equipped with a 6.8-inch QHD+ curved OLED display with an adaptive 120 Hertz refresh rate. A hole is made in the display for the selfie camera, the hole-punch camera most likely offers a resolution of 40 megapixels – comparable to the S20 Ultra.

The European S-Series models will be powered by Samsung’s Exynos 2100. This chipset seems to offer much improved performance compared to last year. The US models will be driven by the recently introduced Snapdragon 888 from Qualcomm. Obviously, the Galaxy S21 Ultra will also offer 5G support, as well as WiFi 6 and Bluetooth 5.1. The devices run on Android 11 OS combined with the One UI 3 interface.

A 5,000 mAh battery will be built in, which will deliver a battery life of approx. 12 hours. Unlike in previous years, Samsung will no longer supply a charger and earplugs. Three months ago, Apple decided to do the same with the iPhone 12 series, to the dissatisfaction of many iPhone fans.

According to the latest information from Korea, Samsung will offer these essential accessories at a reduced price. Samsung also seems to have a different motivation than Apple to omit the adapter and earphones from the sales package. For Apple, eWaste is the main motive. At Samsung, this thought would have arisen because the costs of 5G related parts have increased, so Samsung has started looking for a method to maintain price competitiveness, as Insight Korea reported yesterday. 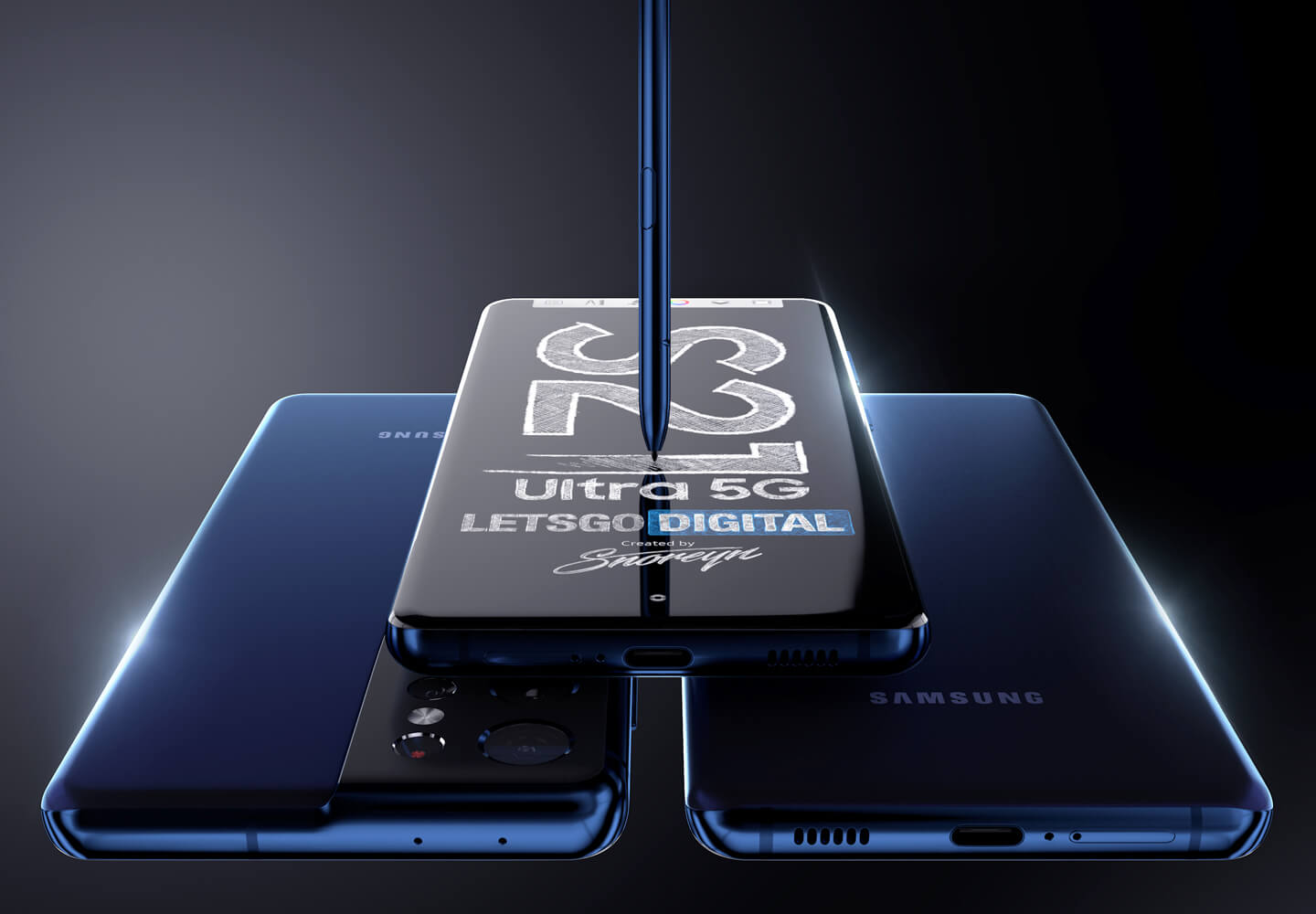 At the time of product launch, two color variants are expected for the Galaxy S21 Ultra 5G: Phantom Black and Phantom Silver. The camera system and metal frame will have a glossy look, while the housing will have a matte appearance. On the internet there is still a lot of speculation about Samsung’s choice of materials. Although LetsGoDigital has heard that the S21 Ultra comes with a glass back panel, there are also rumors circulating that the entire Galaxy S21 line-up will come with a reinforced polycarbonate back panel (plastic).

In addition we have heard Samsung wants to release a Phantom Brown variant before summertime. Display analyst Ross Young reported via Twitter last week that Samsung will release not only a brown version, but also a dark blue color around April – these colors may be called Phantom Brown and Phantom Blue, but the name does not seem to be definitive yet. Presumably the dark blue variant will be a slightly darker version of the bright Aura Blue color announced in May this year for the S20 Plus.

At the same time Samsung also intends to release a Titanium version of the new top model, this variant will most likely also be more expensive than the aforementioned color variants. Just like the South Korean manufacturer also released a luxury Titanium model of the Samsung Galaxy Watch 3 smartwatch in September this year. 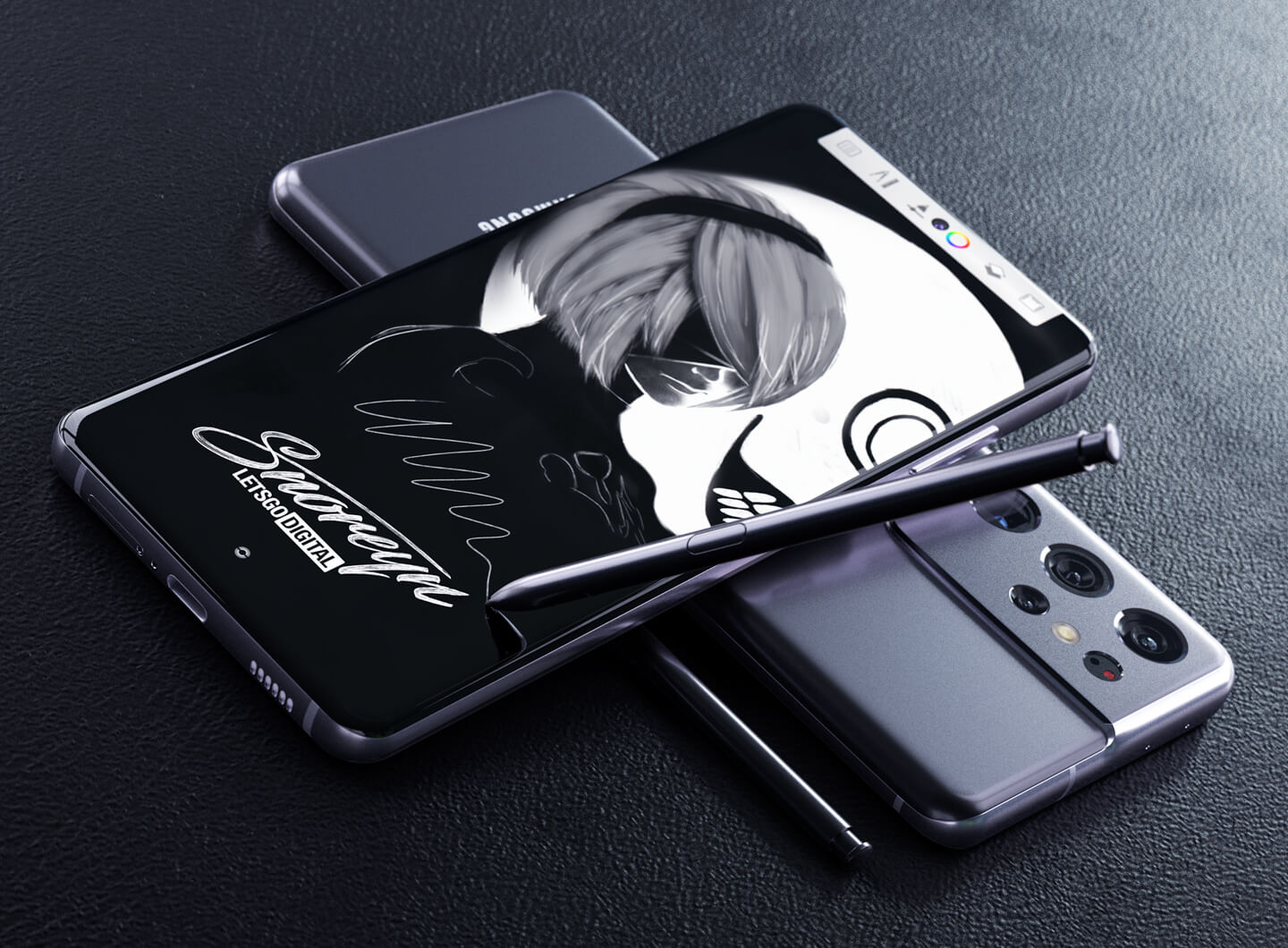 Samsung annually introduces a series of new accessories for its S-series models. That will be no different with the Galaxy S21. Various covers and cases will be made available to optimally protect the device, including a Smart Cover, a Silicone Cover, a Leather Cover and a Protective Stand Cover.

Due to the newly designed camera system, a fairly large notch will be made on the back of the cases. Unfortunately, this seems to be at the expense of sustainability. A smartphone that falls to the ground usually falls on one of the corners – which makes it important that all corners are well protected – which does not seem to be the case with the S21 cases.

Since no charger is included in the box, it will be offered as an optional accessory. The S21 Ultra will probably support 30 Watt fast charging, which is slower than the S20 Ultra which supports a maximum charging power of 45 Watt – however it should be noted this smartphone comes with a much slower 25W charger. 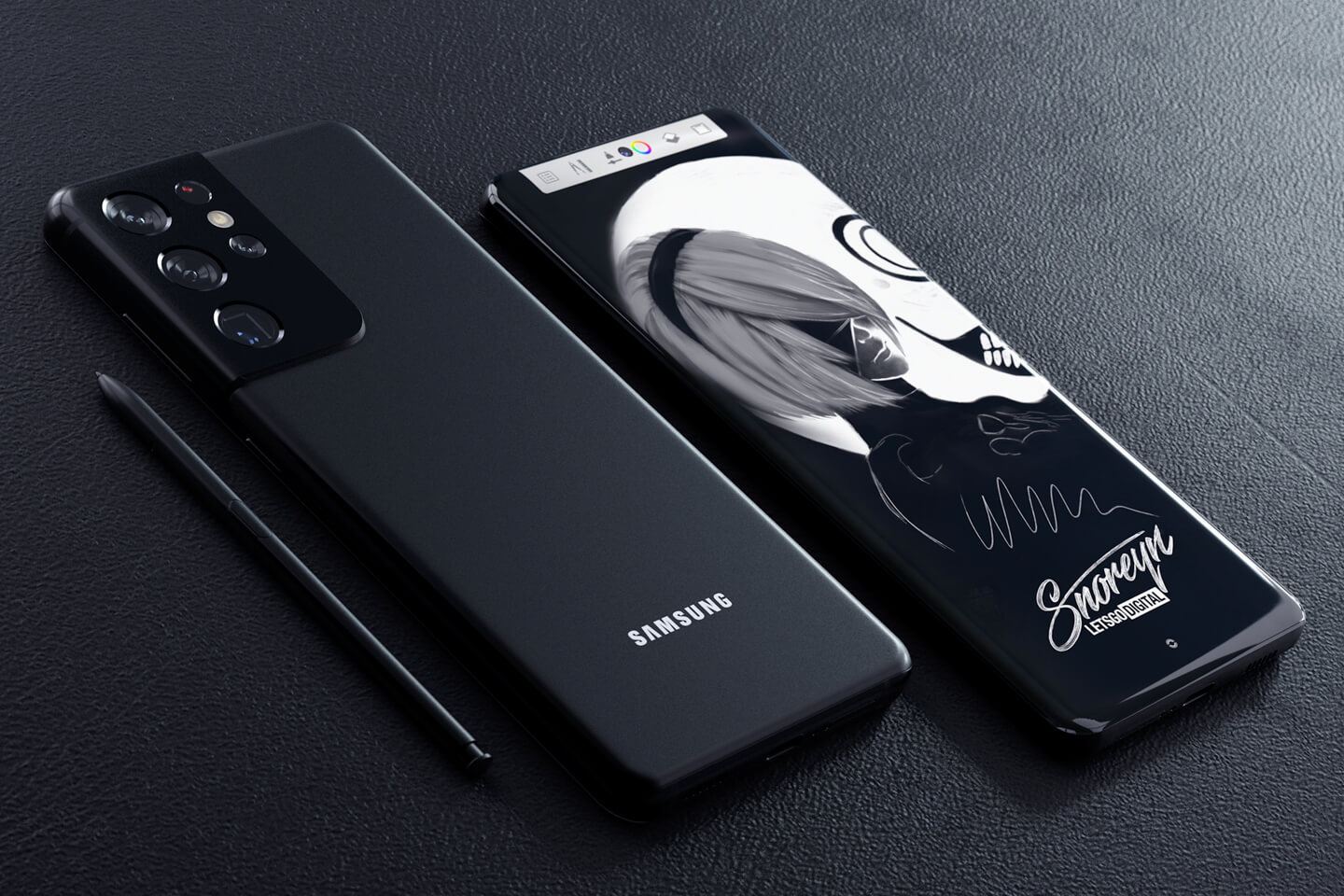 We also expect Samsung to release a completely new accessory, in the form of a Galaxy SmartTag (EI-T5300). At the beginning of this month, Samsung Electronics already registered a trademark for the new Samsung SmartTag in Europe, this device has since passed several certification authorities.

It is a square-shaped tracker with which you can find lost items – it seems to become a counterpart to the long-awaited Apple AirTag. The SmartTag is expected to be marketed in two color variants; black and oatmeal.

It is not the first time that Samsung will introduce a smart tracker. Two years ago, the SmartThings LTE tracker was announced. The new SmartTag tracker may use Ultrawideband technology, LTE and / or GPS.

Finally, the S Pen will be offered as an optional accessory, but this only applies to the Ultra model. Based on the price of the S Pen for the Note 20 Ultra, you can expect a sales price of about € 40.

Samsung is also expected to introduce its first foldable smartphone with stylus in the second half of 2021; the Samsung Galaxy Z Fold 3. The first folding phone with a stylus was shown earlier today, as Oppo shared images of their concept slide phone with three hinges and a stylus via Twitter. 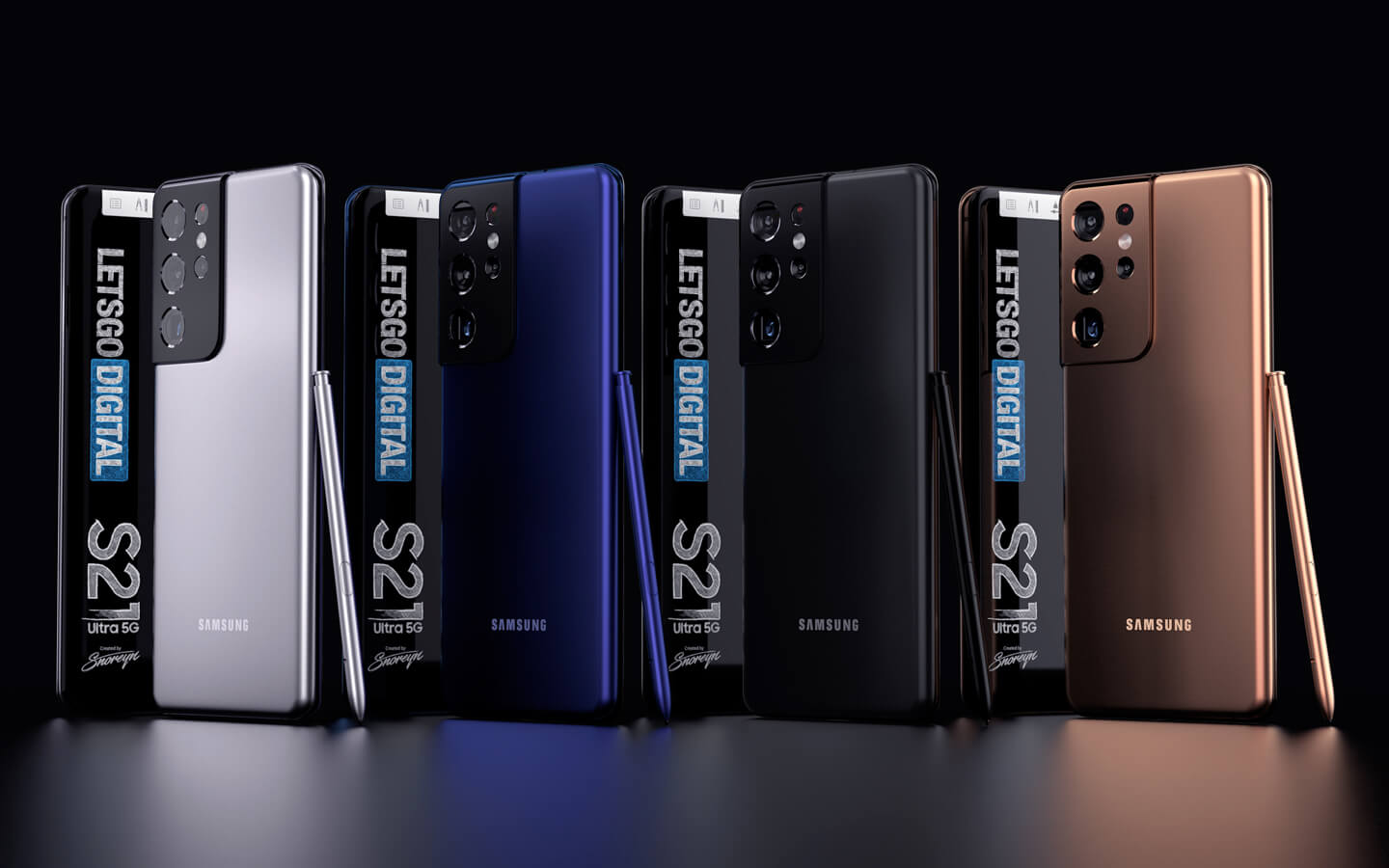 When is the Galaxy S21 Ultra expected?

Although Samsung has yet to send out the official press invitations, it is clear already that the new Galaxy S21 series will be announced on January 14, 2021. A special Galaxy Unpacked event will be set up for this, which will be available via a live stream.

The preorder period will start immediately after the official introduction. You can assume that Samsung will set up various pre-order promotions for the top model. For example, consumers can choose from a free S Pen and / or free Galaxy Buds Pro earbuds or a free game bundle, in line with the collaboration with Xbox.

The worldwide release will take place on Friday January 29, 2021. From that moment on, the new models are also available in the shops. Last year, the S20 Ultra got a starting price of € 1,350 (128GB). Although the Ultra model will be improved on several essential points compared to last year, the expectation is that the Samsung Galaxy S21 Ultra 5G will be marketed slightly cheaper; € 1,300 (12GB ROM / 128GB RAM). 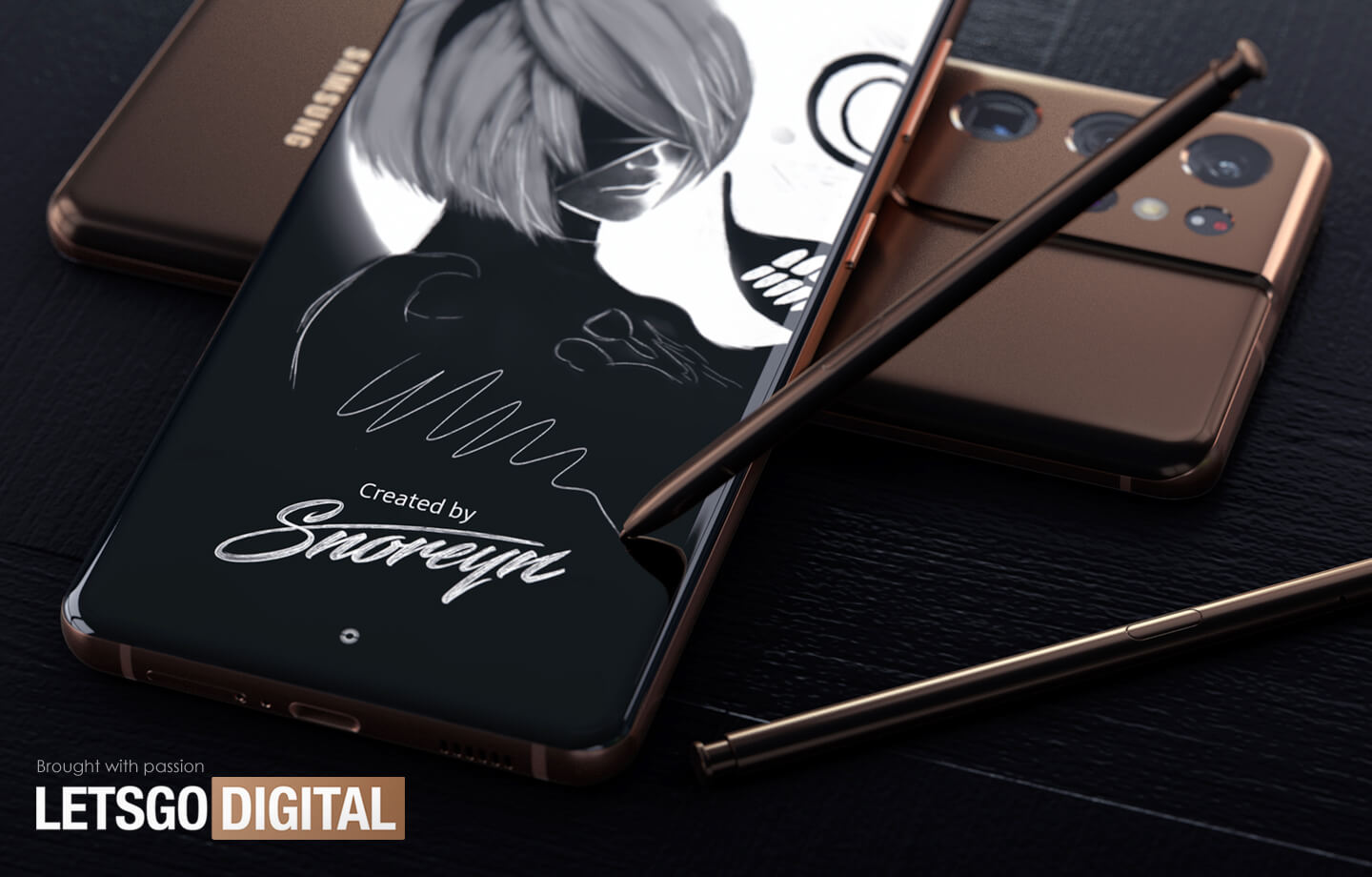 Note to editors : The product images shown in this publication are created by in-house designer Giuseppe Spinelli (aka Snoreyn). The presented 3D renders are for illustrative purposes only. The images are copyright protected. Feel free to use these renders on your own website, please be so respectful to include a source link into your publication. This product is not yet for sale, Samsung is expected to launch their 2021 S-series devices halfway through January.