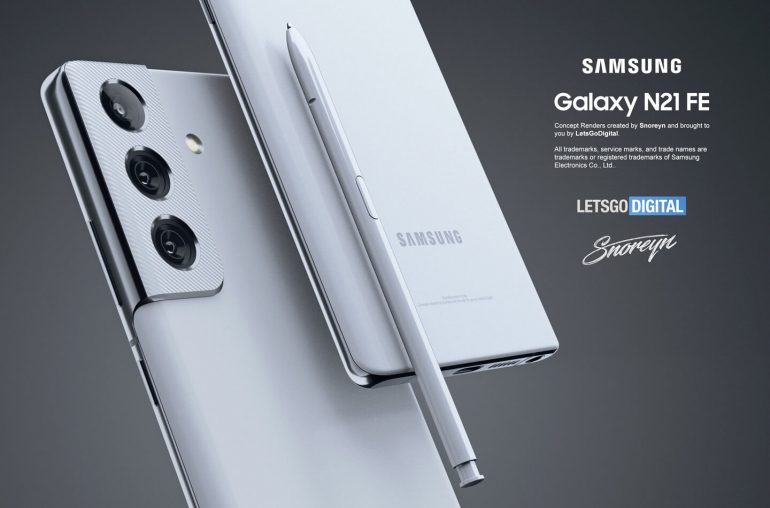 We are already half-through February. The first high-end Samsung smartphones from 2021 went on sale last month, the Galaxy S21 series. Traditionally, it is now a matter of waiting till August before Samsung will introduce a new series of high-end models that will be placed within the Galaxy Note line-up. This year it is exactly 10 years ago that Samsung launched the Note series, but is there celebration?

Rumors have been circulating for years that Samsung wants to end the Note series. These phone models have increasingly come to resemble the other high-end models of the brand; the S-series. There was a time that the Galaxy Note was characterized by the largest screen, largest battery and of course the iconic S Pen.

But since Samsung introduced an Ultra model within the S series, all these unique features are no longer predestined for the Note series. For example, the S20 Ultra has a larger screen and a larger battery than the Note 20 Ultra. With the recently introduced S21 Ultra, Samsung went even a step further by making this device compatible with the famous S Pen. Now that the S Pen has entered the S series, the distinctive character of the Samsung Note model series has become nil. 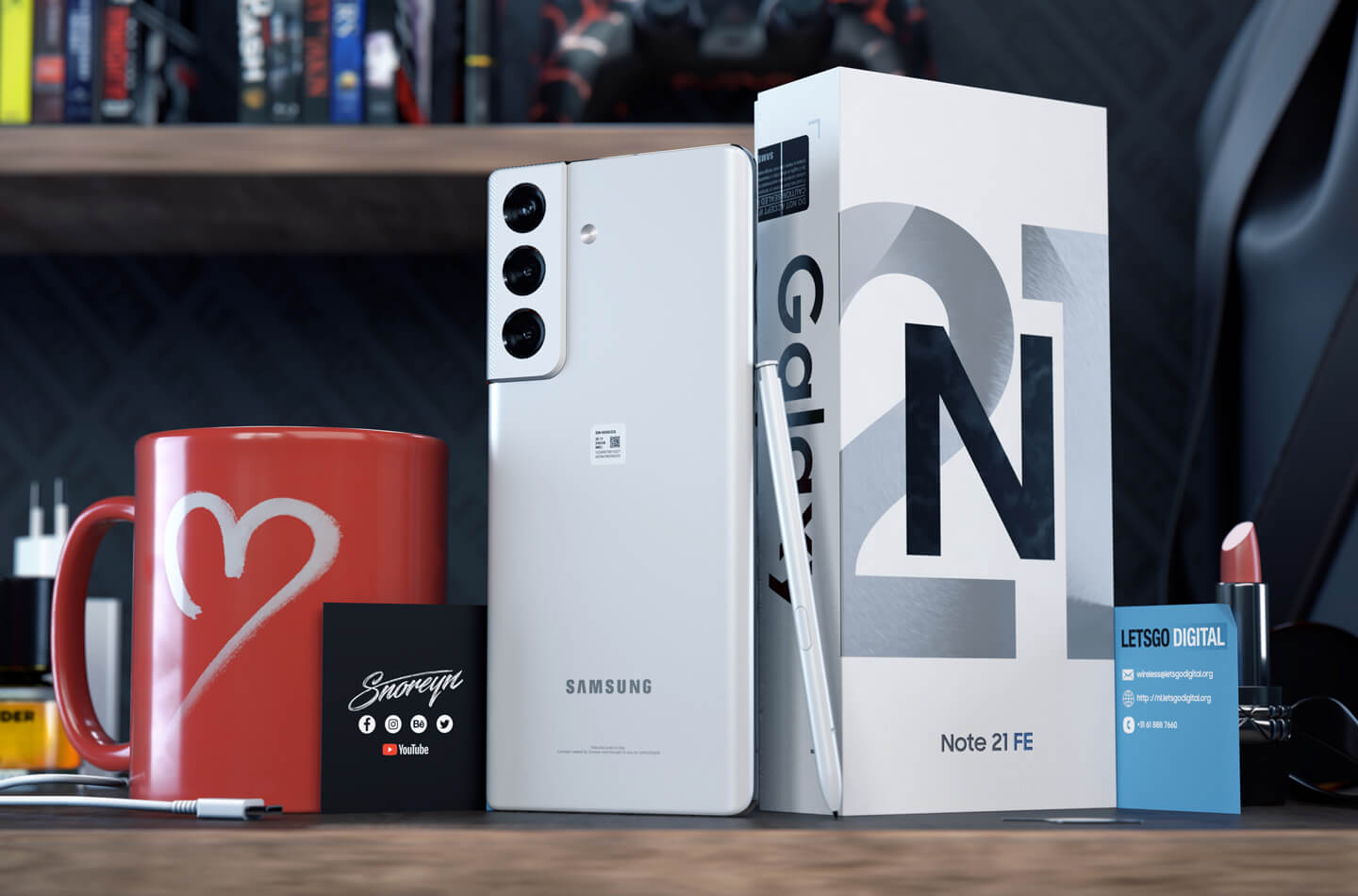 Will there be a new Samsung Galaxy Note in 2021?

Samsung themselves completely deny that the Galaxy Note series has been discontinued. In December 2020, a Samsung official told Korean News Agency Yonhap, “We are preparing for a Galaxy Note series release for next year.” Afterwards, other publishers have also checked with Samsung. The Korean manufacturer is still be committed to the Note line-up, was the general answer.

As far as we are concerned, it is therefore inconceivable that Samsung will say goodbye to the famous Note line-up without releasing at least one last model. Perhaps this model will become a Fan Edition, made for the fans. Just like Samsung released a Galaxy S20 FE (Fan Edition) in September last year. This is the cheapest S-series model, a kind of Lite variant that offers a lot of value for money.

To give you a taste of how such a Note might look like, Italian graphic designer Giuseppe Spinelli, aka Snoreyn, has designed a phenomenal set of product images of a beautiful Samsung Galaxy Note 21 FE Phantom White edition. Because today is February 14, the renders are made in the spirit of Valentine’s Day.

The sales package is also slimmer compared to last year, because there is a good chance that no charger and no earplugs will be included. Samsung has already started this new trend with the introduction of the Galaxy S21 series. The pre-order sales of the three S-series models were significantly better than last year, so there seems to be little reason for Samsung to reconsider this decision. 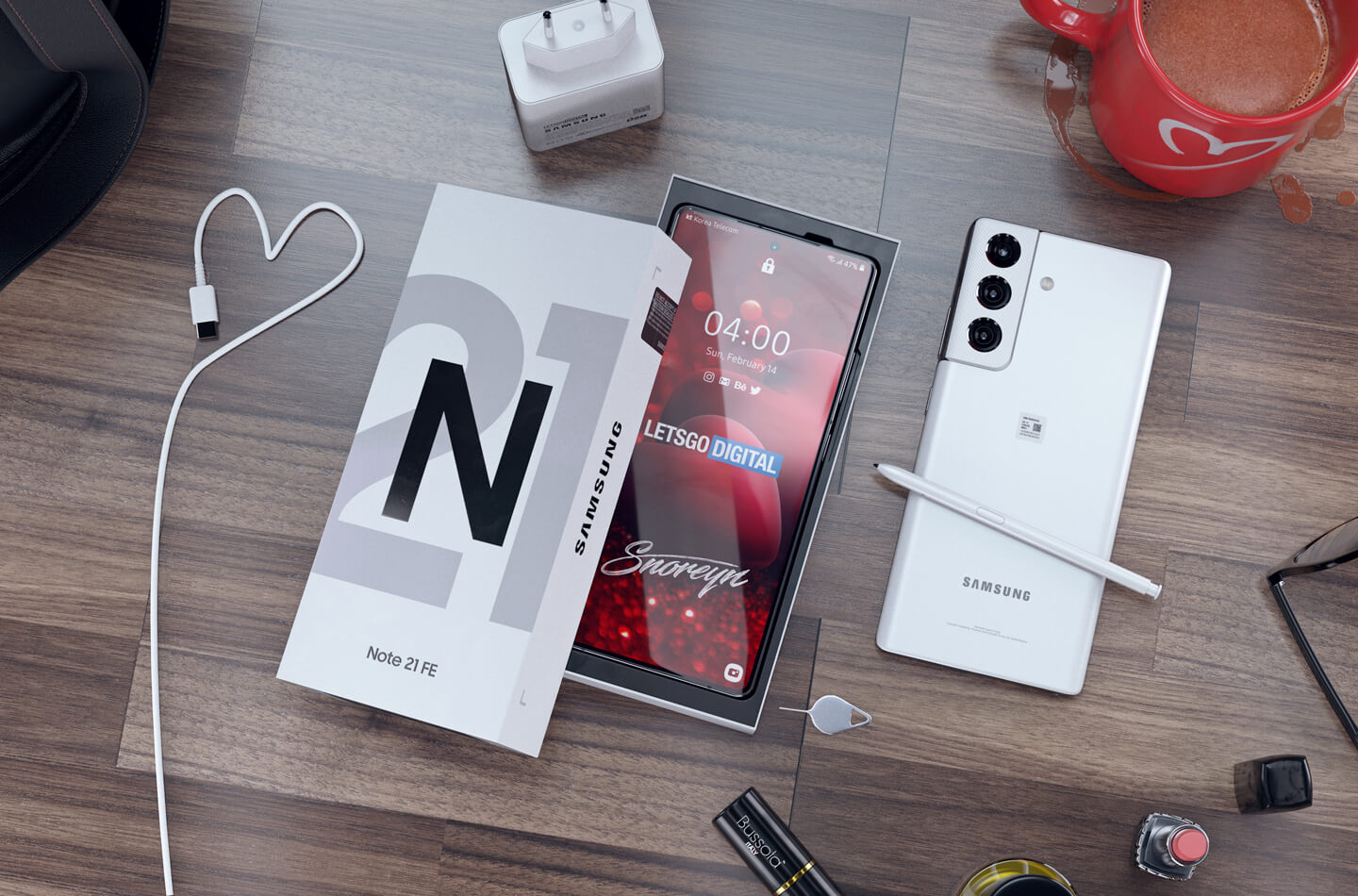 Samsung Note 21 FE for the fans

Samsung has already developed a Fan Edition of the Note before. In 2017, the company released a Samsung Galaxy Note FE. It was a revised version of the recalled Note 7. A kind of refurbished copy, which was put on the market by Samsung at a greatly reduced price. This model was only released in South Korea.

Should Samsung indeed decide to develop a new Galaxy Note for the fans, it will likely be a relatively inexpensive model with high-end features. Logically, Samsung will choose to implement a flat display with a Full HD+ resolution, as is also the case with the Note 20 and S21. The hype about curved displays is over, if it is up to Samsung.

Although Chinese manufacturers are increasingly implementing curved screens – think, for example, of the quad-curved display of the Xiaomi Mi 11 – Samsung is actually going back to the basics. Many users find a flat display easier to operate than a rounded screen. Moreover, it is cheaper to produce, which in turn is beneficial for the selling price.

In addition, Samsung will probably opt for a plastic back. That sounds cheap, but it is also more durable and less fingerprint sensitive than glass. Moreover, many use a phone case, so you never actually see the back of your phone.

In addition, we hope that the new Note 21 FE will adopt the latest design features of the S21. We are of course talking about the renewed camera layout, with the camera module being merged with the frame on the side and top of the device. 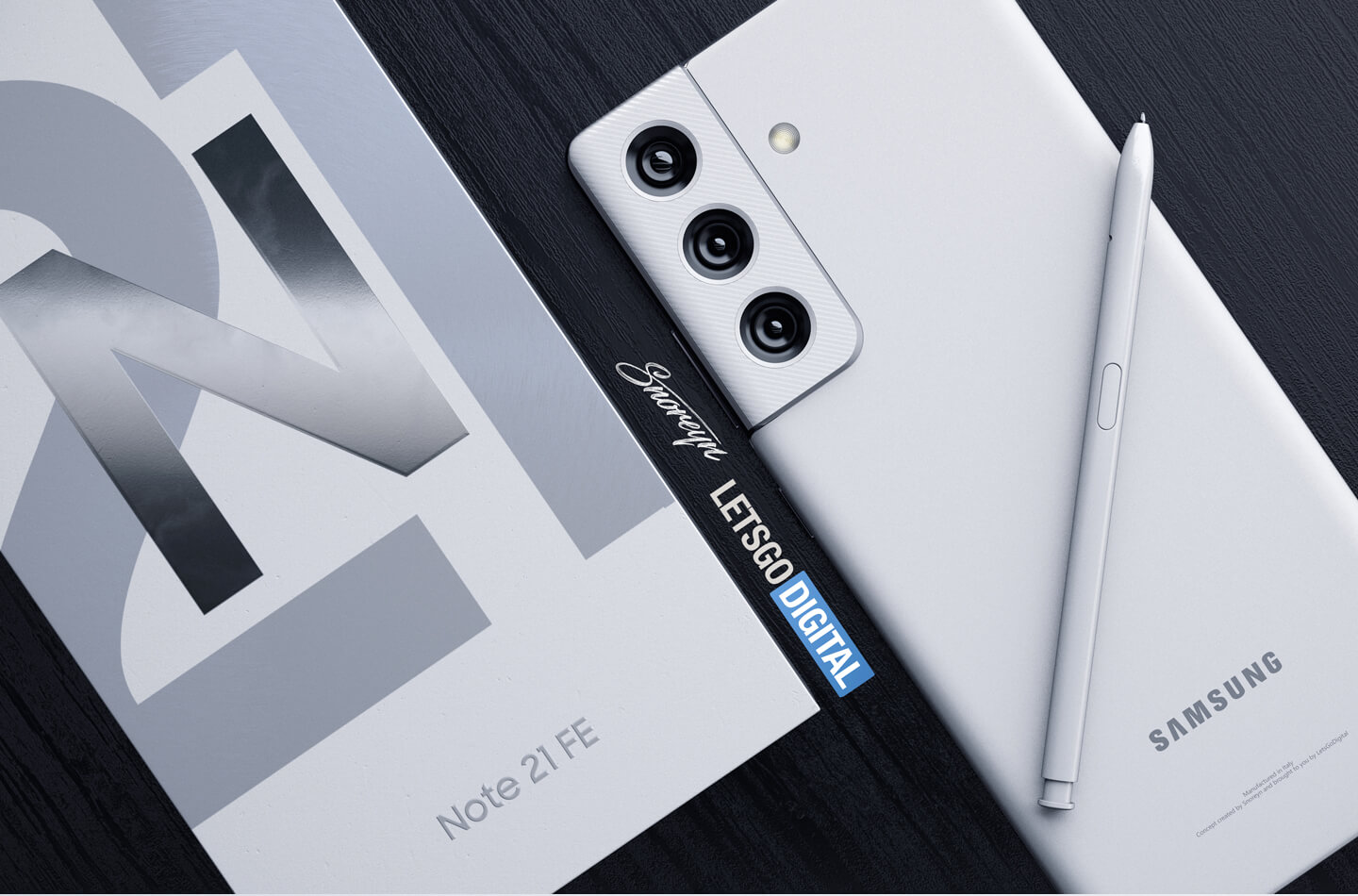 Samsung has never introduced a Note smartphone without a stylus pen. So you can assume that this stylus will be included again this year. Should a Galaxy Note 21 FE be introduced, it is likely that this model will also have a stylus compartment to store the stylus. This is not the case with the S21 Ultra, the S Pen is optional there. In addition, Samsung has designed covers with a stylus storage compartment.

Also in terms of functions there are now several S Pens in circulation. The Note 20 Ultra comes with an S Pen with an extra low latency of 9mm, making it feel like you’re writing with a regular pen. The stylus of the standard Note 20 has a slightly longer delay of about 26mm. This pen may be included with the Note 21 FE.

In any case, it seems out of the question that the new Note comes with the S Pen Pro. The Pro variant was announced for the S21 Ultra, but this stylus is significantly longer as the stylus is not stored in the phone itself. Due to this different design it is not logical that Samsung would include this pen with a possible Note 21 Fan Edition. The S Pen Pro does not only differ in terms of design, the Bluetooth functionality is also lacking with this stylus pen, meaning that the Remote functions are not accessible.

Logically, Samsung will also provide the device with the latest Android software. The S21 series, for example, runs on the Android 11 operating system combined with the One UI 3.1 user interface. The hardware may not be updated to keep the Note 21 FE affordable. After all, the 7nm Exynos 990 / Snapdragon 865 used in the Note 20 is also a very powerful chipset. 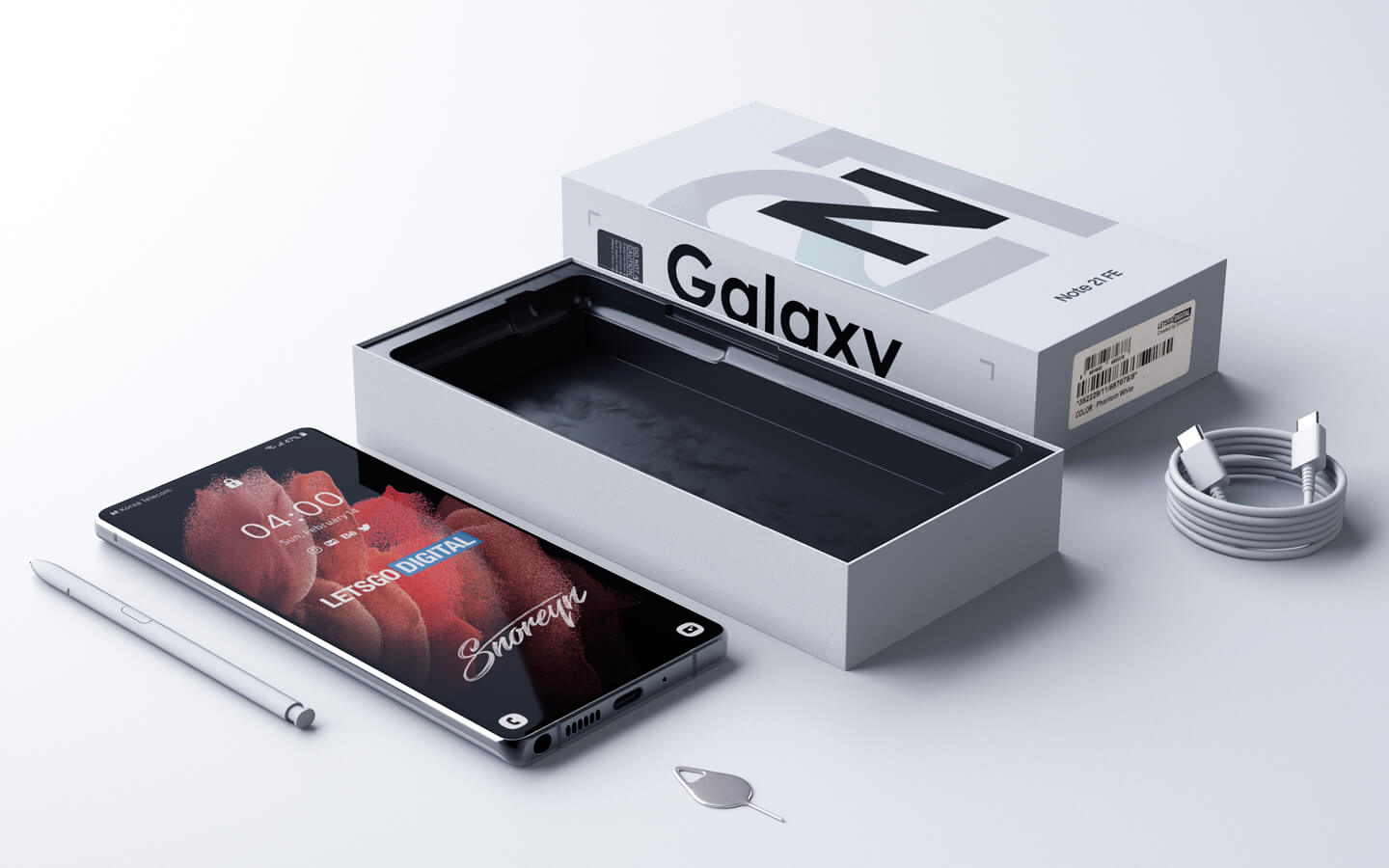 Much is still unclear regarding the battery capacity. This might be related to the size of the display. With the 6.7 ”Note 20, Samsung opted for a 4,300 mAh battery, which offers a reasonable battery life of about 10 – 11 hours. Should Samsung equip the Note 21 FE with a 6.5 ”display, a 4,100 mAh battery should sufficient to provide a comparable battery life. However, Samsung will probably choose to build in a slightly larger battery – as was the case with the acclaimed S20 FE.

Remarkably, a 65W travel adapter from Samsung was also certified earlier this year. For the time being, it remains unknown for which phone model this extremely fast charger is intended. It could of course be intended for the new Note, although it cannot be ruled out that Samsung will provide one of the new Galaxy Z foldable smartphones with 65W fast charging compatibility, such as the Galaxy Z Fold 3. In any case, we have also included this mysterious charger in our product renders.

If Samsung keeps the same schedule as in previous years, it will take about half a year before the new Note 20 FE / Note 21 FE will be announced. We are still in the dark about the price. Last year, the Note 20 was significantly cheaper than its Ultra sibling, both in terms of specs and price. The base model was marketed for € 950 (4G) / € 1,050 (5G), while the Ultra 5G model was priced at € 1,300.

If Samsung will indeed release a Fan Edition, it might become a somewhat cheaper model. All the more because the prices of the already available models have dropped considerably in the meantime. At the time of writing, you can buy the Note 20 5G for € 790.

The suggested retail price of the Samsung Note 21 FE 5G may be comparable. In the coming months, more news will undoubtedly become known about Samsung’s Note line-up for 2021. 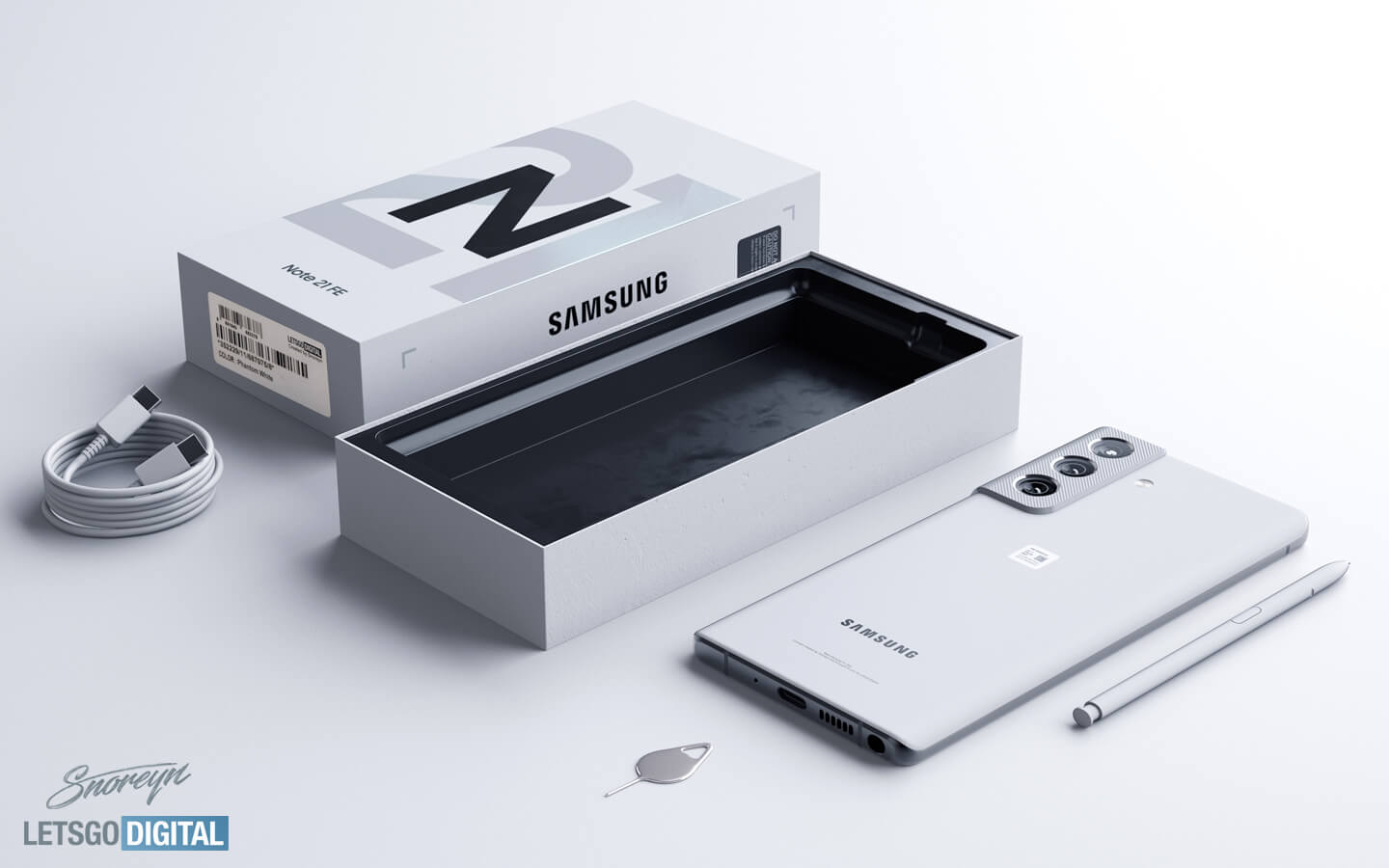 Note to editors : The product images shown in this publication are created by in-house designer Giuseppe Spinelli (aka Snoreyn). The presented concept renders are for illustrative purposes only. The images are copyright protected. Feel free to use the photos on your own website, please be so respectful to include a source link into your publication.