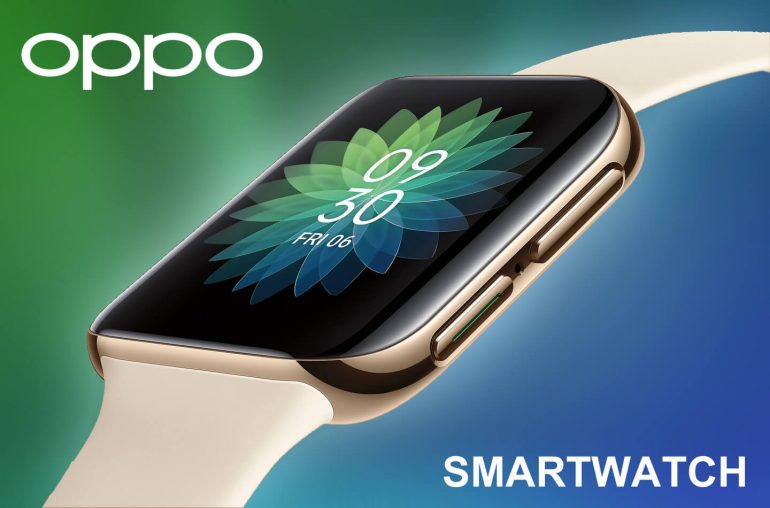 Oppo smartwatch will be a true Apple Watch competitor

Oppo is getting ready for a battle in the heavy-weight category with a new stylish smartwatch. Possible product release date - Friday, 6th of March!

There’s another Chinese brand, soon to join the technology arms race and engage one of the big boys – Apple. You’re probably familiar with Oppo and its current rapid development – the company is already making a name in the smartphone space and at the end of 2019, Oppo announced plans for a whole smart devices ecosystem. It will feature lots of interesting devices such as an AR headset, 5G hub, wireless headphones and, of course, a smartwatch. It’s the company’s first and Oppo is deciding to aim high – it will be unveiled in the first quarter of 2020 and directly compete with the Apple Watch.

As we’re getting up to speed with all the tech news in January, more and more details about this new Oppo smartwatch are emerging from the rumor mill. Sadly, it won’t be the foldable smartwatch Oppo filed a patent for halfway through last year, but the device will have a big impact on the market nonetheless.

Brian Shen – VP and president for global marketing at Oppo – shared some details about the design of the upcoming device via Twitter, and this morning the manufacturer showed for the first time a high-resolution product render via the Chinese social media channel Weibo so we finally get a glimpse of how this smartwatch will look like. 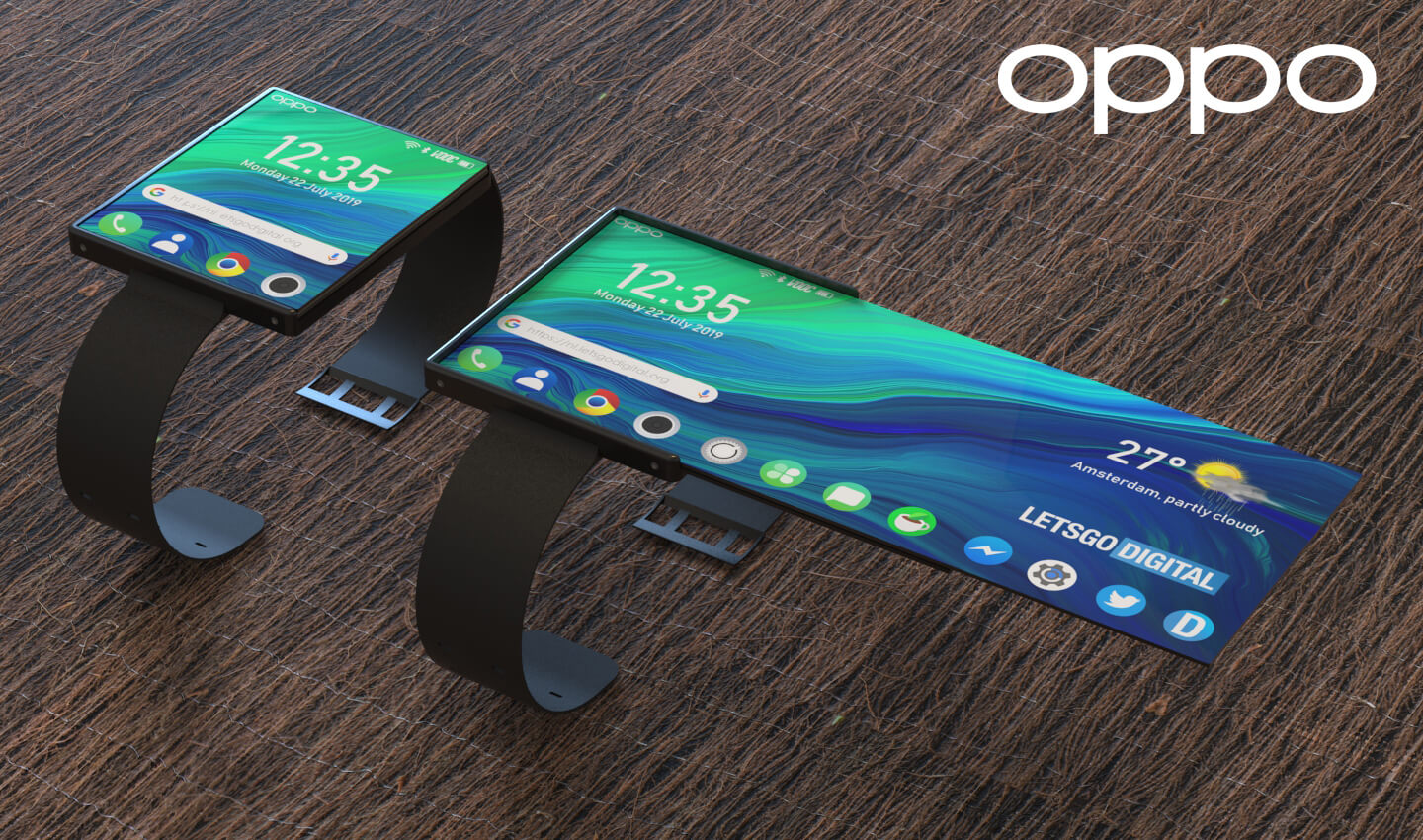 Design of the Oppo smartwatch

There’s no way of hiding it – Oppo is aiming to compete with Apple with the design. The similarities are striking and it’s not surprising at all – Apple Watch is one of the best-selling devices in the wearables market segment. Oppo, like many other Chinese brands, drew inspiration from Apple in its early smartphone models.

This time is long gone though, and now Oppo has a distinct personality in its smartphones, due to the huge R&D department and budgets, helping the brand to leave its copycat roots. Considering this will be the first smartwatch Oppo is building, they’ll opt to play safe and offer consumers something rather familiar.

The Oppo watch has beautiful rounded screen edges and a curved display resulting in a very stylish device. Two physical buttons can be found on the side but the distinctive “crown” seen in the Apple Watch is missing here. The buttons are long and sleek with what appears to be a notification LED in one of them. A small hole between them indicates the presence of a microphone, suggesting calls will be possible with this smartwatch. 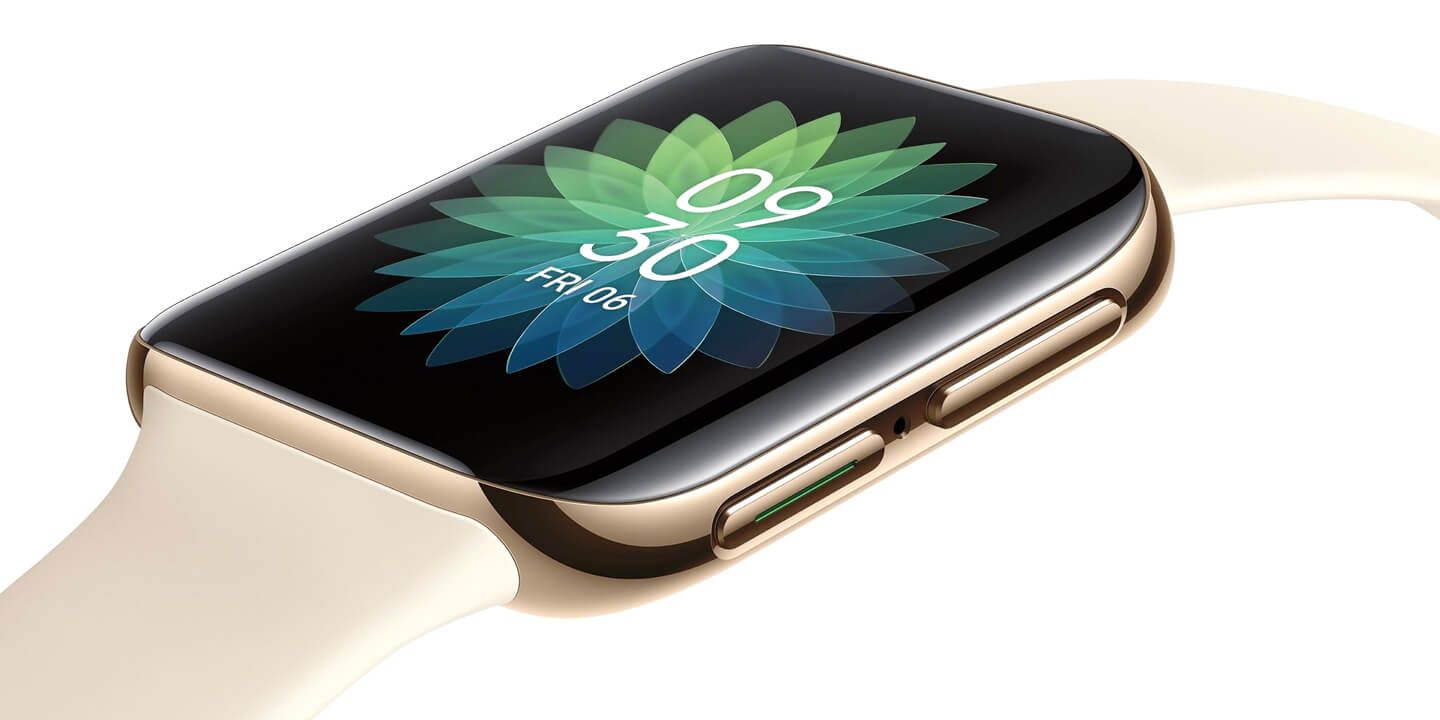 Apart from the already mentioned microphone and LED notification light, the Oppo smartwatch will be equipped with a heart-rate sensor and the option to measure blood pressure. The latter will probably employ some cleaver algorithms analyzing the heart rate to do its magic. Similar features are present in most modern smartwatches – Apple Watch 4 and 5, Samsung Watch Active 2 and Huawei Watch GT2 just to name a few. Whether Oppo will equip its smartwatch with a dedicated GPS chip or will use the so-called “shared GPS” mode – where the watch actually uses the paired phone’s GPS – is still not know.

Software-wise it will probably use a tailor-made OS by Oppo with all the necessary functionalities tied-up with the heart-rate sensor. These include fitness tracking, calorie burning, sleep quality assessment and more of the sort. Of course, all the notification features will be present with the possible option to make calls through the watch – remember that microphone hole?

Battery life is another mystery but we should expect at least a day away from the plug as is the case with most feature-packed smartwatches.

Prices of these devices can wildly vary and we’ve seen some clever designs using translucent LCD like the Amazfit BIP and Stratos, cutting cost and extending battery life and also a premium bunch like the Huawei Watch GT2 and Samsung Watch Active 2. Judging by the design and the features of the new Oppo smartwatch it will probably lean towards the more expensive side. Apple Watch 5 starts at $399 and considering the competitive strategy and small profit margin of most Chinese companies, we can expect the price of the Oppo watch to float around $299 mark but we’re shooting in the dark here.

The smartwatch will be officially introduced in the first quarter of 2020, as the company has already announced. In the render, the watch shows ‘Friday 06’, a possible hint to the official release date. If that’s the case, the device will probably see the light of day just after the Mobile World Congress in Barcelona on February 24th. It may, however, refer to the date it will go on sale, so there’s still a possibility we’ll get to see the Oppo Watch at MWC 2020.