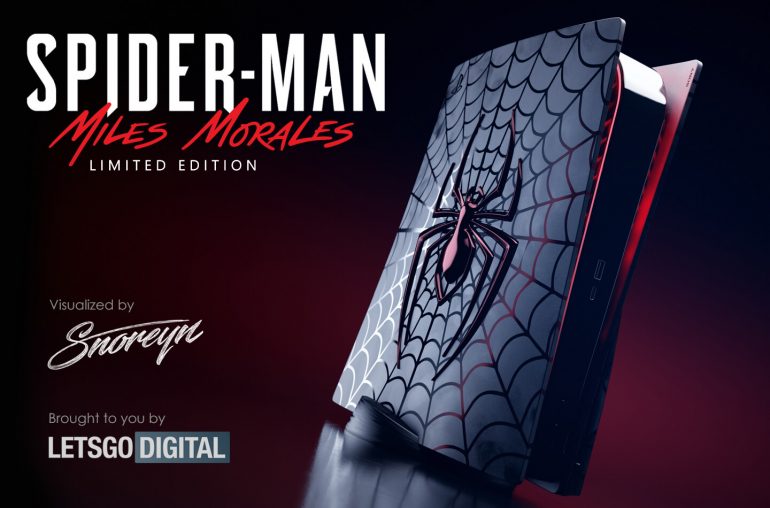 Take a look at the most impressive Limited Edition console ever - inspired by the Spider-Man Miles Morales game that will be released alongside the PS5.

The countdown has begun. Just seven weeks of patience and then the PlayStation 5 will be released! On November 19, the first gamers in Europe will receive their new console. The desire for the PS5 is enormous. Although pre-order sales have already started, the first production batch was completely sold out in no time. The stock is gradually being replenished, nevertheless many web shops are already reporting ‘early 2021’ as the delivery date for both standard PS5 with disc-drive and the PS5 Digital Edition. 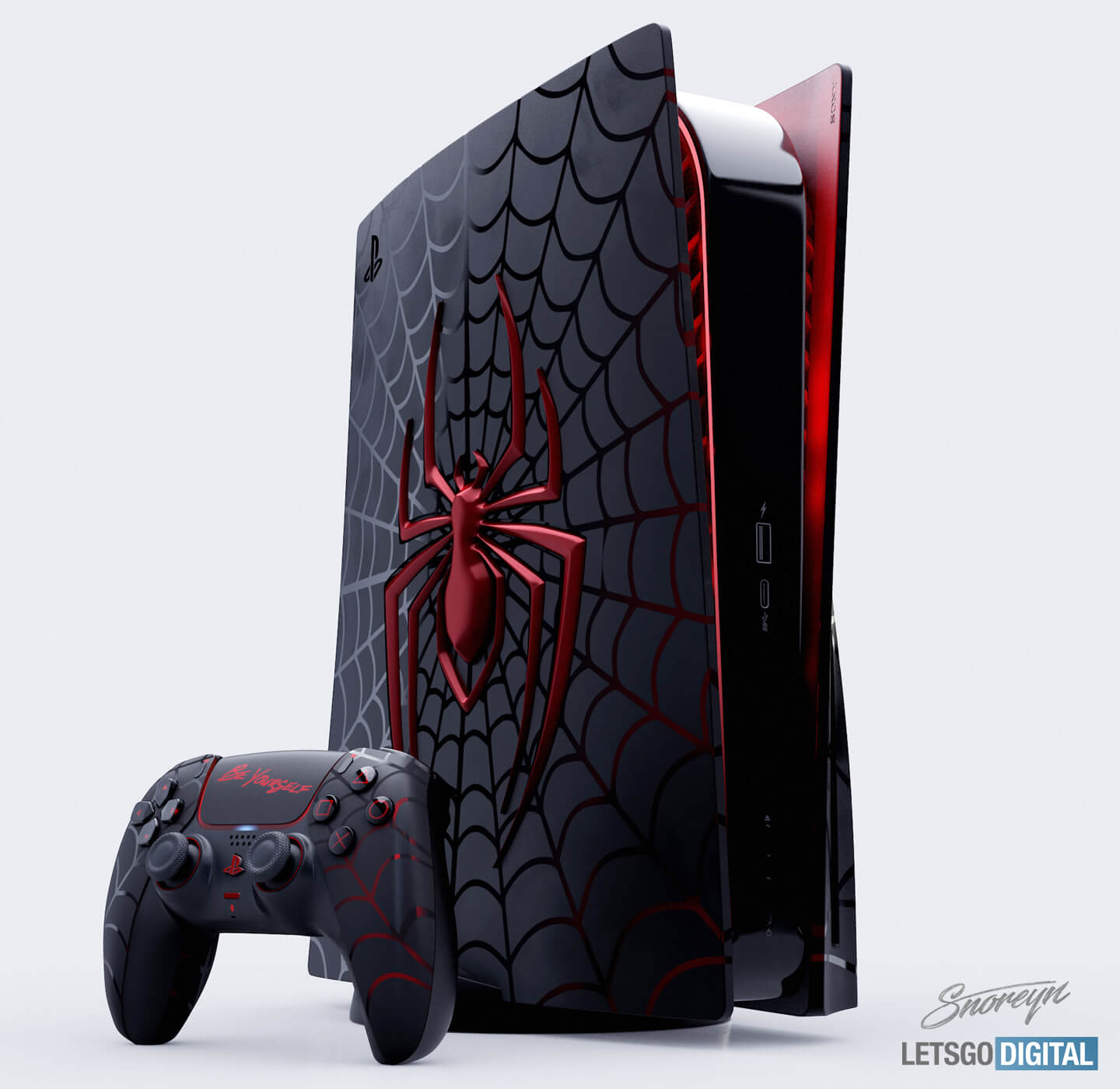 You probably remember Giuseppe Spinelli. The Italian digital artist, known online as Snoreyn, has in collaboration with LetsGoDigital made several impressive video productions around PlayStation 5. It started with a fan-made PS5 trailer, afterwards Giuseppe also animated the new DualSense controller and he designed a stunning PS5 Black Edition.

This time Giuseppe in collaboration with LetsGoDigital brings a brand new PS5 Spider-Man Miles Morales Edition. The console is accompanied by a PS5 Digital Edition, which is presented in the same unique style. For those who doubt the authenticity of this video: it is a concept designed by us – all images shown are digitally made, this product is NOT confirmed by Sony. Unfortunately….

The black game console has the same distinctive design as the regular PS5 and is beautifully decorated on both sides with a 3D-designed Spider – the Miles Morales logo – which is displayed in a deep red color scheme. The spider web extends over the entire console and offers a perfect contrast to the matte black housing of the console thanks to the glossy material.

Also special, the spider web can reflect red light which provides an extra playful effect and is reminiscent of Miles Morales’ outfit. The black / red color scheme gives the console an extra heroic look, especially combined with the red LEDs around the vents.

Giuseppe has also taken the time to create a DualSense controller with a matching design. The touchpad of the black game controller features the signature slogan ‘Be Yourself’ and the gamepad itself is richly decorated with a shiny spider web. Furthermore, various red elements have been applied on and around the buttons and touchpad, which give the DualSense controller its complete own identity.

The Sony PS5’s side plates seem to be designed to be removable and replaceable, similar to a computer case. This may allow users to choose a specific video game theme themselves, without Sony having to release a completely new Limited Edition console. By simply changing the skin, you would have a completely redesigned game console at your disposal. A relatively cheap solution, over time you can also decide to buy a new skin and adjust the theme.

Furthermore, it remains unclear whether the PlayStation 5 will also have RGB LEDs. RBG lighting has become extremely popular for PC gaming in recent years. For example, virtually no gaming keyboards are released without RGB lighting nowadays.

It not only provides an extra colorful accent, but also helps gamers to perform better. The colorful lighting can indicate that something is happening in the game and gamers can anticipate on this. RGB lighting can also provide added value when gaming in the evenings. For those who experience the RGB LEDs as a distraction, there will undoubtedly be the possibility to adjust / turn it off as desired, possibly that this can be arranged per profile. 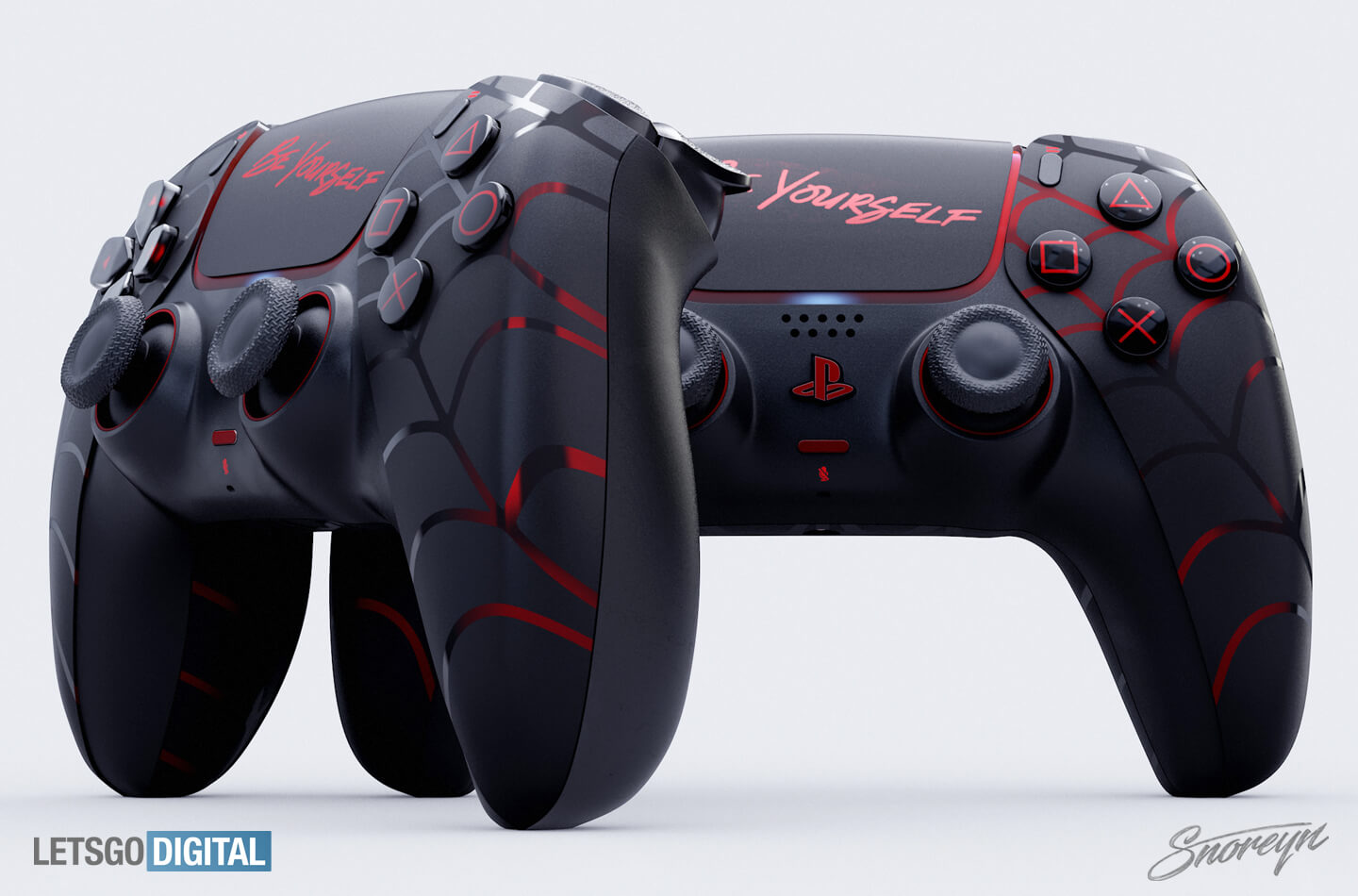 Launch title for the Sony PlayStation 5

As a PlayStation fan, you will probably have noticed that Spider-Man: Miles Morales will be one of the launch titles for the PS5. It is a standalone game from PlayStation Studios developer Insomniac Games. Last month, Sony released the first gameplay footage. It was also recently announced that the new Spider-man game has an optional 60fps mode. The full game will consume about 50GB of file space.

Sony knows all too well that the interest in this new game is enormous. For example, the very first PS5 game cover shown by Sony was the cover of Spider-Man Miles Morales. Many PlayStation 4 owners therefore wondered whether the game will also be playable on the current console. The short answer is Yes, a PS4 version will also be released, but there will be no free upgrade for those who have already purchased Marvel’s Spider-Man.

The good news is that the PlayStation 5 is backwards compatible, which means that the existing Marvel’s Spider-Man: Miles Morales will be playable on the new game console. However, in that case you will miss the upgrades that the remaster offers.

The Remastered version contains the full game, including all three DLC chapters of Marvel’s Spider-man: The City That Never Sleeps. Several new photo modes are also added, you can now place light sources in the environment and switch Spider-Suit while taking the photo. In addition, three new costumes will be made available, a so-called T.r.a.c.k. Suit, an Amazing Suit and a third unknown out-fit. 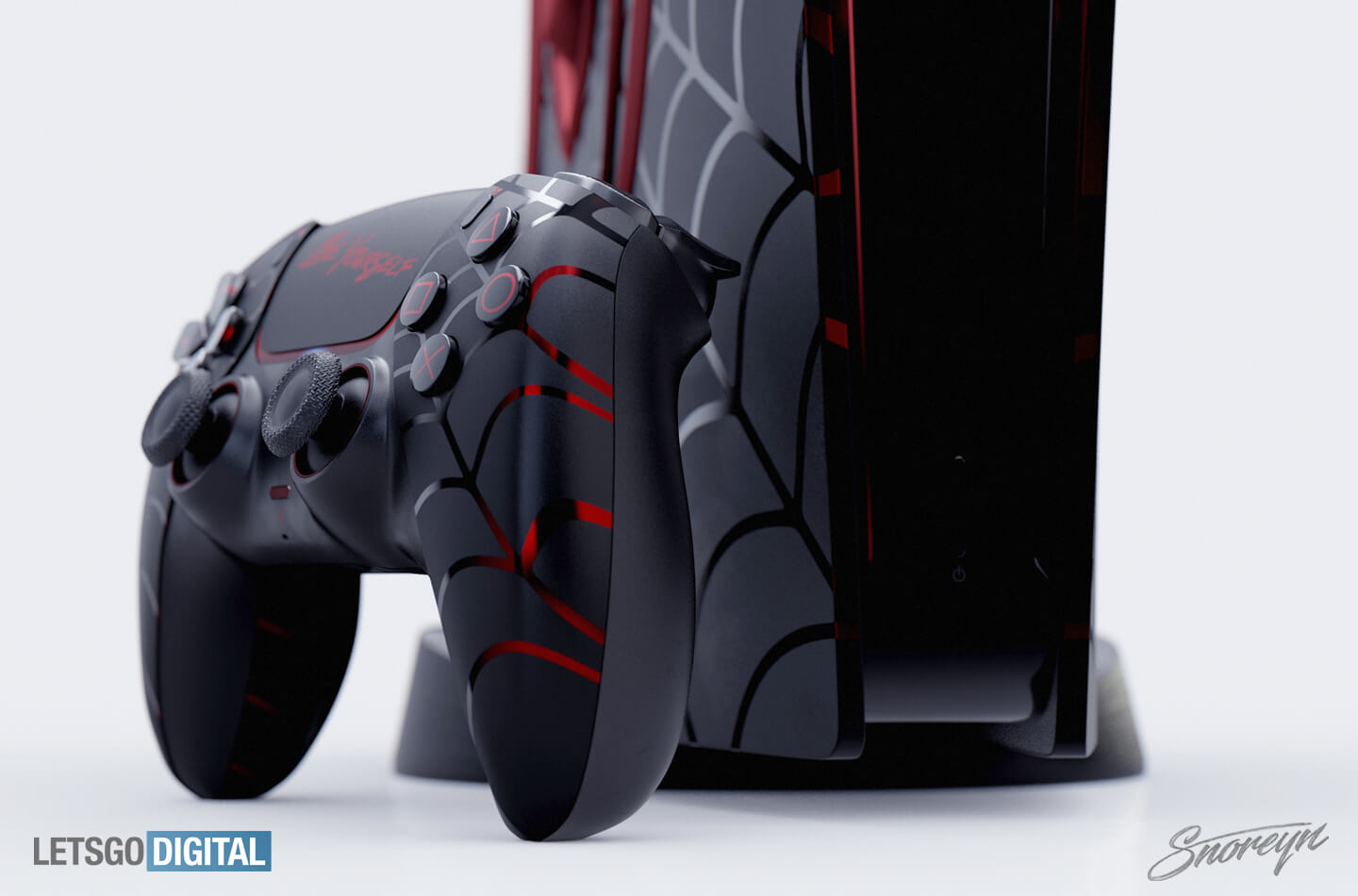 If you decide to buy Spider-Man Miles Morales for PS4, you will receive a free PS5 digital version as a gift, as stated on the PlayStation webpage. If you have already bought a PS4 version, you don’t need to pre-order the PS5 version – this option will be offered to you as soon as you put the existing disc in the PS5. Of course this will not work on the PS5 Digital Edition, as this console does not contain a disk drive.

The PS5 version will of course make use of all the new possibilities that the console has to offer, such as significantly faster loading times, ray tracing and of course 3D audio. You can best experience 3D audio with a compatible headset. Hardware ray tracing makes it possible to create much more beautiful shadow effects and reflections, think of Spider-Man hanging against a window – the reflections on that window look much more natural and detailed.

The characters have also been redesigned and show significantly more detail than before. The renewed face of Peter Parker has triggered a lot of reactions on the internet though, many find him now appear younger, while in Miles Morales he should be more experienced – which is clearly contradictory to each other. Cory Barlog, creative director at Sony Interactive Entertainment Santa Monica Studio, responded to the commotion via Twitter by saying he trust the developers in the choices they made – as they love the game as much as you do.

Furthermore, the new DualSense game controller will also offer several new options, including haptic feedback and adaptive triggers. The more tactile feedback pulls you even deeper into the game, adding to an extra immersive gaming experience. With the PS4 variant, these extra functions are not available because this console is only compatible with the existing DualShock controller.

The PlayStation 5 preorder sales have already started, although it´s not going smoothly at all. The first batch was sold out very quickly and as soon as some stock is available again, you only have a few minutes before the console is completely sold out again. Especially the version with disk drive is very popular. This one costs € 500. It makes the Sony PS5 exactly as expensive as the Xbox Series X, which will be launched worldwide on November 10, 2020.

The price of the PS5 Digital Edition is set at € 400. You can only play digital games with this console. A disadvantage of this is that you are dependent on the PlayStation Store to buy games, where relatively few games are offered on discount. You will therefore have to spend more money on purchasing games. Moreover, it is not possible to sell a game once you are done playing with it. Buying cheap second-hand games is also out of the question if you choose the digital edition.

The PS5 Digital Edition from Sony is also significantly more expensive than the All Digital Edition from Microsoft. The Xbox Series S has a retail price of € 300. Microsoft, however, has chosen to provide this game console with less powerful specs, while Sony incorporates the same hardware in both models. 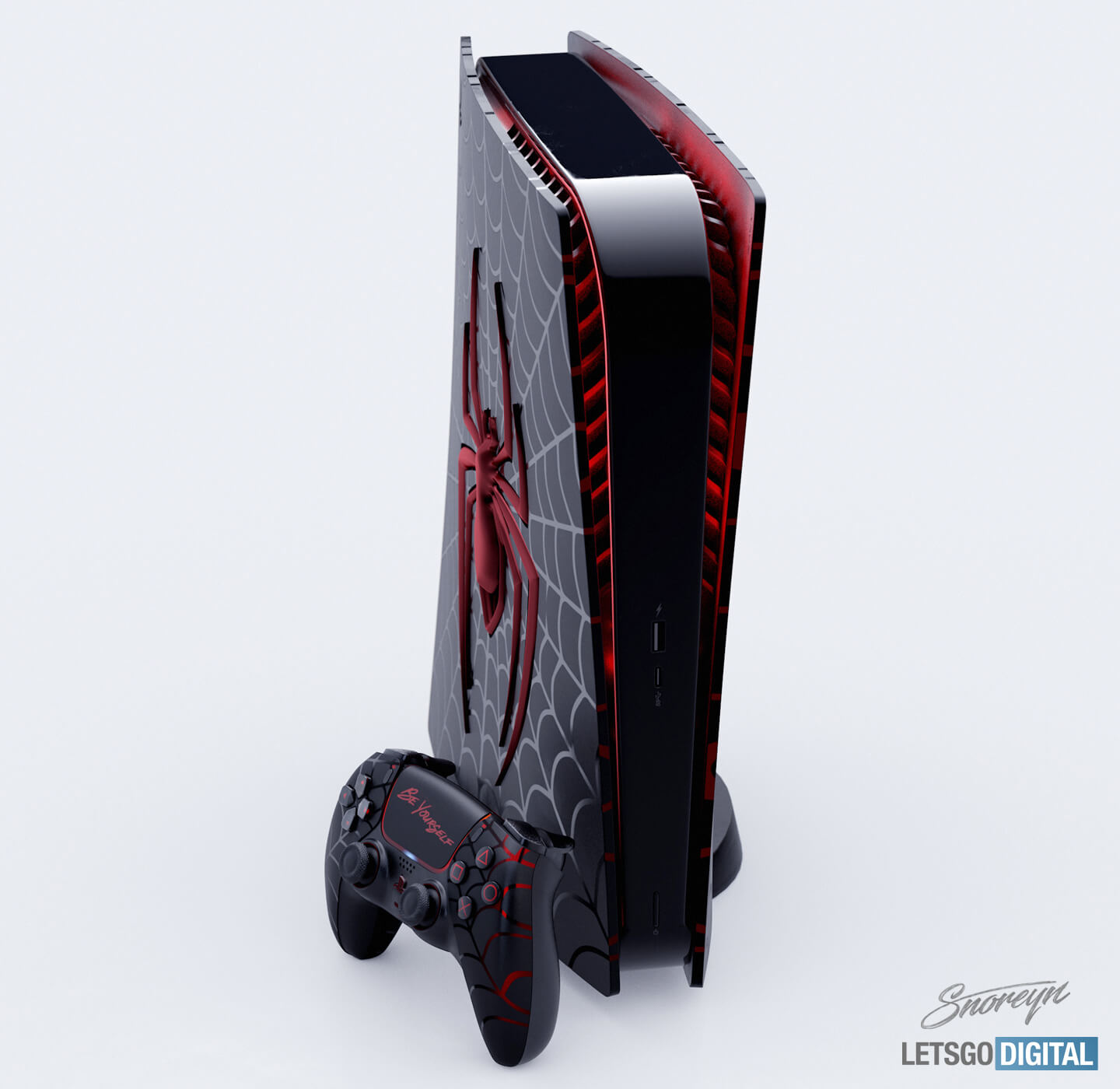 NOTE : The product images shown in this publication are created by Giuseppe Spinelli (aka Snoreyn) in collaboration with LetsGoDigital. The renders are for illustrative purposes only. This product is not for sale, it´s a concept of a PS5 Spider-Man Miles Morales Limited Edition console. So far Sony only introduced a white/black version of the PlayStation 5.