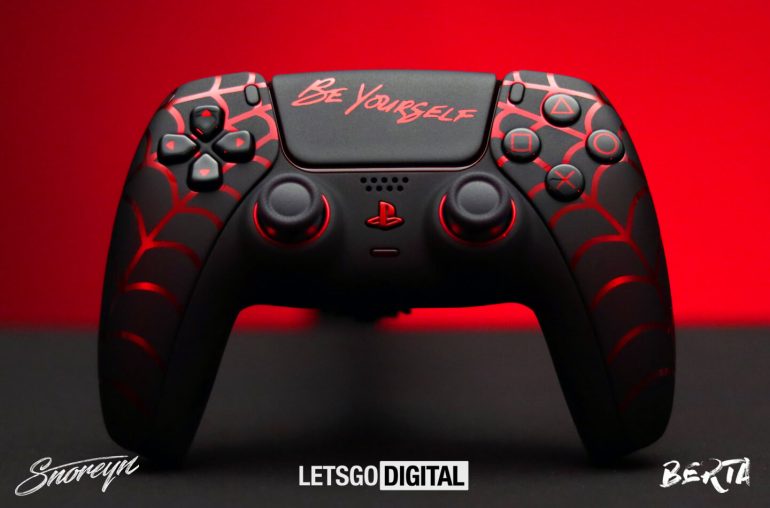 Many of you will remember the unique PlayStation 5 Spiderman Miles Morales console made by Giuseppe Spinelli, aka Snoreyn. One year ago, even before the PlayStation 5 was officially released, the talented Italian graphic designer created for LetsGoDigital an impressive concept of a PS5 Limited Edition console – in the theme of the exclusive game Spider-man: Miles Morales. The new DualSense controller also got a matching design, with a beautiful red shiny spider web.

The reactions were overwhelming, many expressed their hope that Giuseppe’s design would become a reality. This has driven the graphic designer and hard-core gamer to actually realize his design. In close collaboration with the Italian airbrush artist Enrico Bertagnoli, aka Berta, the DualSense controller has been transformed into a beautiful custom-made Spider-man Edition. 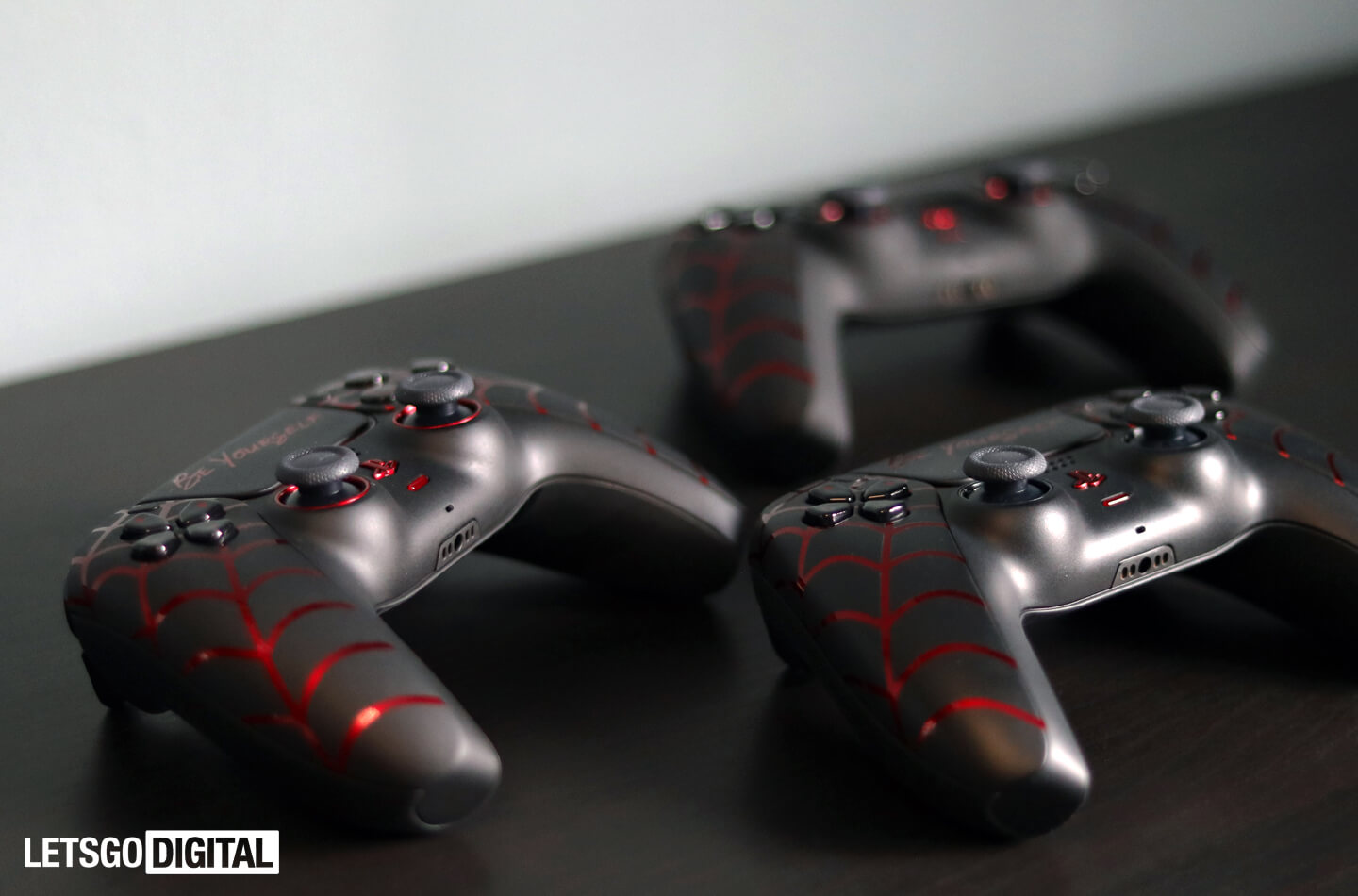 The Italian duo has tried to make the controller resemble the original from the video as much as possible. During the past month the editorial staff of LetsGoDigital has been able to spend quite some hours of gaming with this unique controller. It is truly a pleasure to play with this game pad.

The DualSense controller is richly decorated with a shiny spider web. The dark chrome red reflects beautifully in the light. This creates a luxurious and playful effect and is also reminiscent of Miles Morales’ outfit.

The distinctive slogan ‘Be Yourself’ can be read on the touchpad of the black game controller. Various red elements have been applied to and around the buttons, to give this DualSense controller its own identity.

Berta even managed to paint the light bar red, ensuring the light bar shows different color combinations when turned on. This red glow is also visible during charging. It is the only DualSense controller in the world with a modified light bar.

The back of the controller was not visible in the video. In reality, Snoreyn designed a beautiful spider with a matte-grey color scheme for the back. This DualSense controller looks and feels very premium and provides even more gaming fun. It is a project born of passion, you can see and feel it.

Snoreyn and Berta have pursued an incredibly high level of detail. From design to implementation. It is really not visible that this controller has been edited by hand. It takes many hours of intensive work, but when you look at the result it’s well worth it. By using high-quality paint, the custom design continues to look beautiful even after many hours of gaming.

Snoreyn also created a new stunning video with live footage of him and Berta working on the controller – as shown above. He even designed a matching sales box for it, completely in line with the guidelines of the original DualSense box. 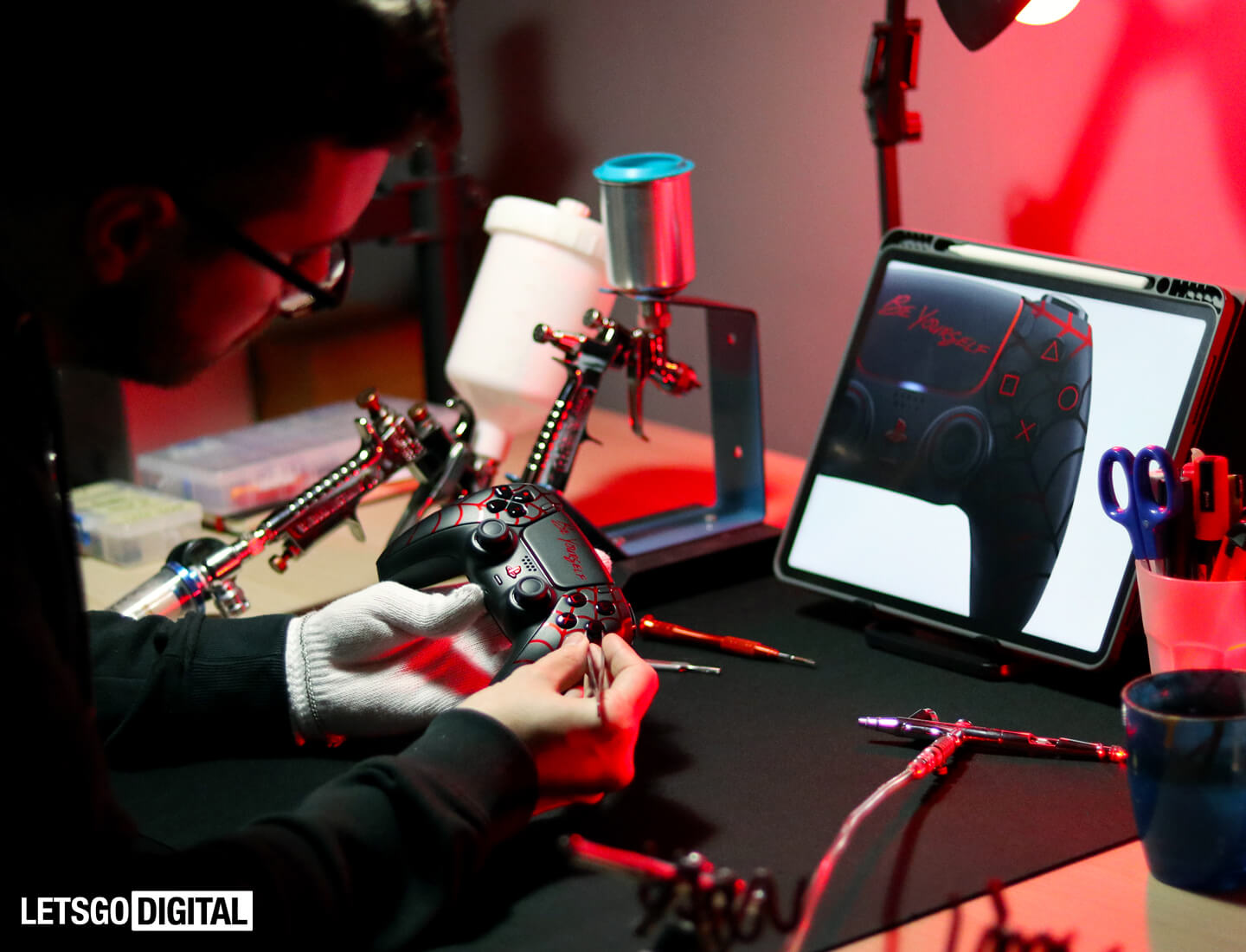 Since childhood, Berta has been passionate about drawing. When he came into contact with the air-brush, he became enthusiastic about the technique which later became the main tool of his work. Berta prefers quality over quantity. He tries to make every project unique, with a sharp eye for detail and a particularly high level of finish.

Berta’s qualities have not gone unnoticed by others either. For example, the airbrush artist was allowed to paint the face mask of Olympic fencing champion Bebe Vio. He also regularly carries out assignments for the video game sector, including Ubisoft Italy, as well as for game editors and well-known YouTubers.

For the DualSense Spider-Man project, Berta worked closely with Snoreyn. From the start, he was convinced that Snoreyn’s design could become reality. They are both very happy with the end result. The timing is also perfect, after all, Miles Morales is celebrating his 10th birthday this year, so to speak. 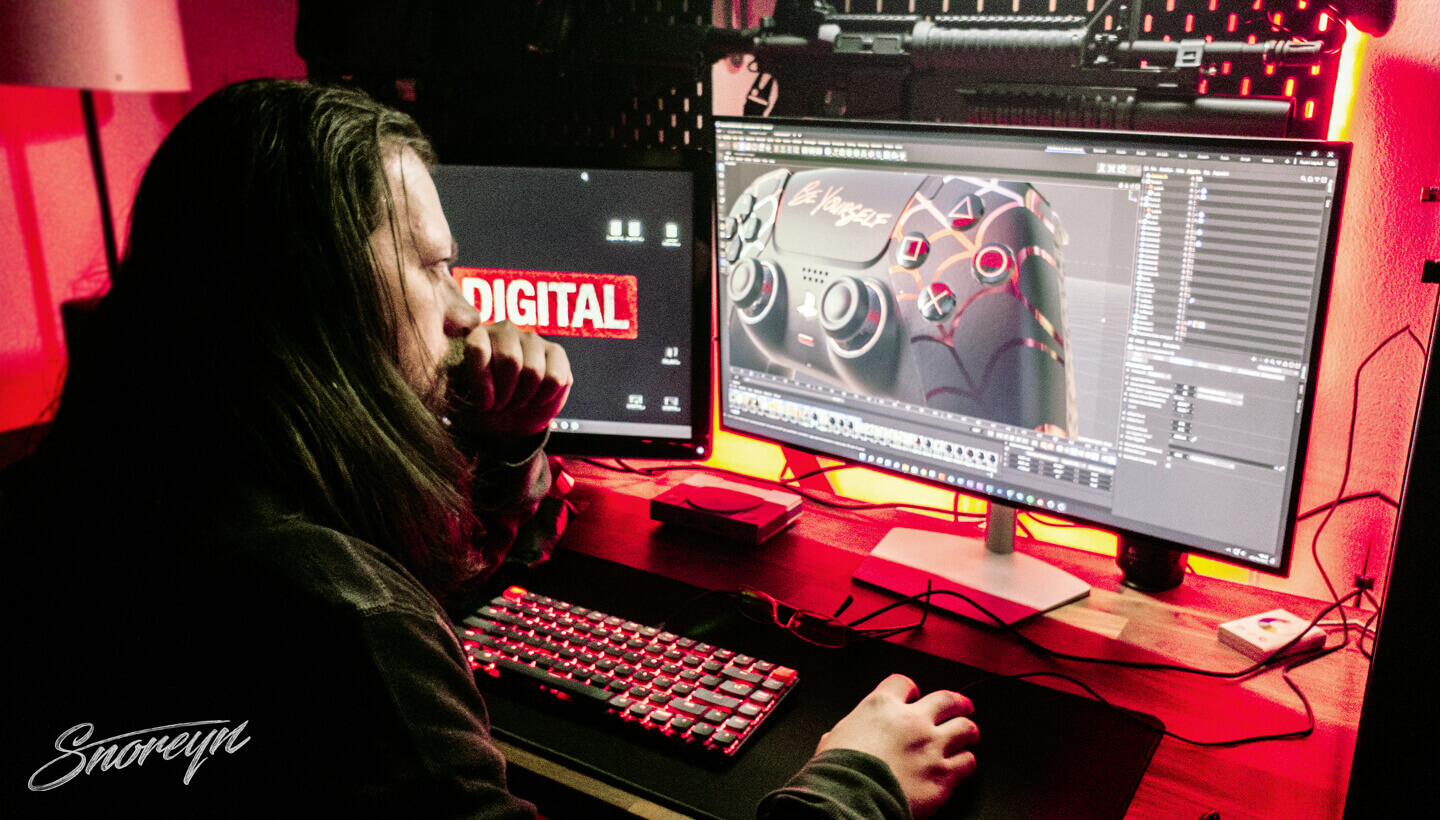 Snoreyn is a true perfectionist. Creativity has shaped him from an early age. He feels an enormous urge to make things that he aspires to. From video games, consoles and gamepads to other types of consumer electronics products.

Snoreyn decided to study Graphic Design and came into contact with 3D software for the first time. He soon became intrigued by the many possibilities that such software programs offer. This enables him to visualize his ideas in 360°.

Making 3D designs is a time-consuming job, especially if you strive for the level of detail that Snoreyn has in mind. He also knows how to deal with light effects in a sublime way.

Although Snoreyn is not an industrial designer, he always tries to take into account how the design would turn out in reality. This is once again apparent from this DualSense controller, which has grown from a sketch into a real product thanks to Snoreyn and Berta. 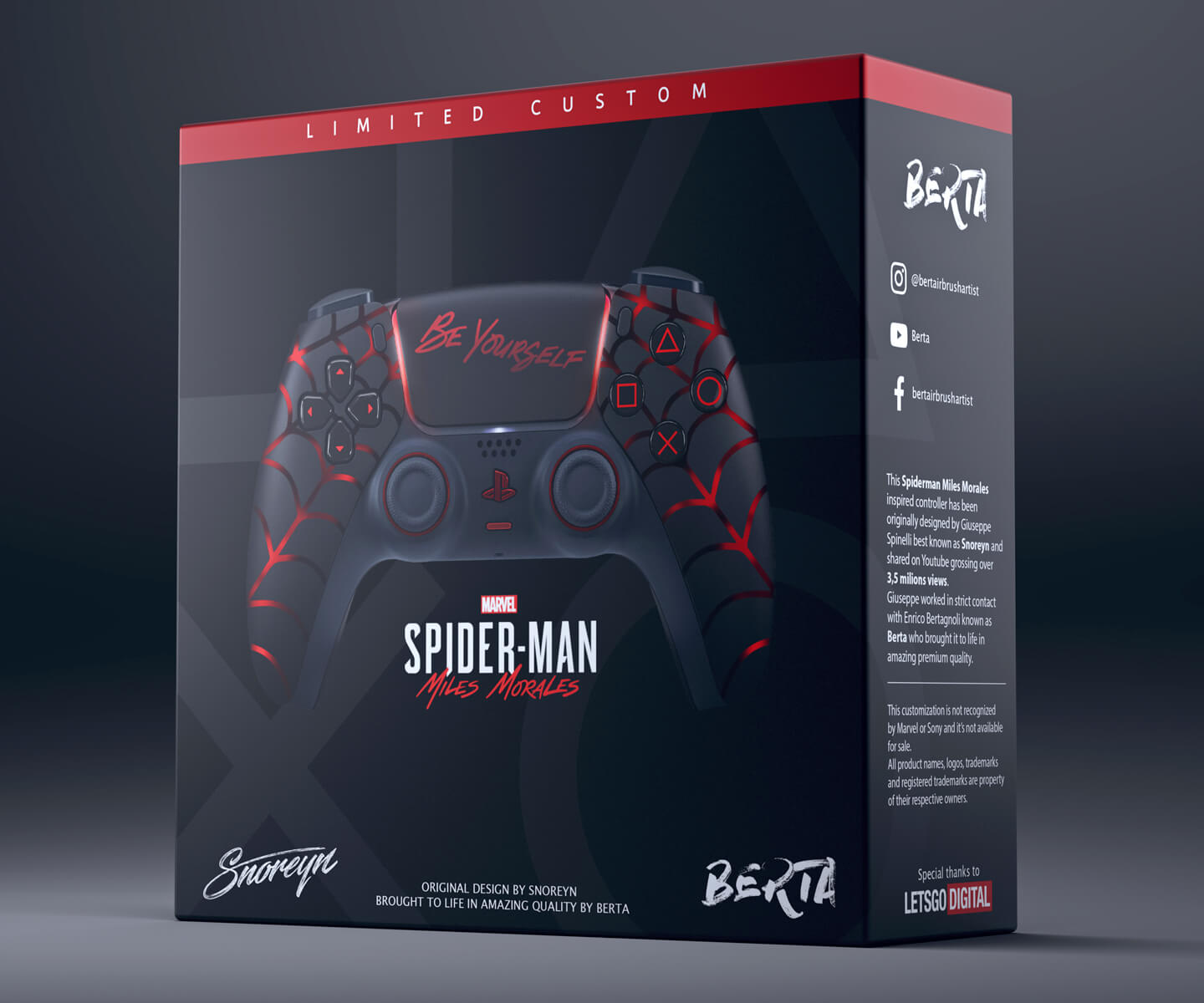 Do you want to get your hands on this exclusive controller yourself? At the moment the Spider-man controller is not offered for sale as the project was initiated as a private initiative.

If it turns out that several people are interested Berta might start production of the controller in a limited quantity – in order to guarantee the high quality and exclusivity of the product. Follow the social channels of Berta and Snoreyn to stay updated on this topic!

In addition, you can contact Berta for requests regarding custom controllers and other custom painting projects. All his work is made entirely by hand with special attention to originality and quality. 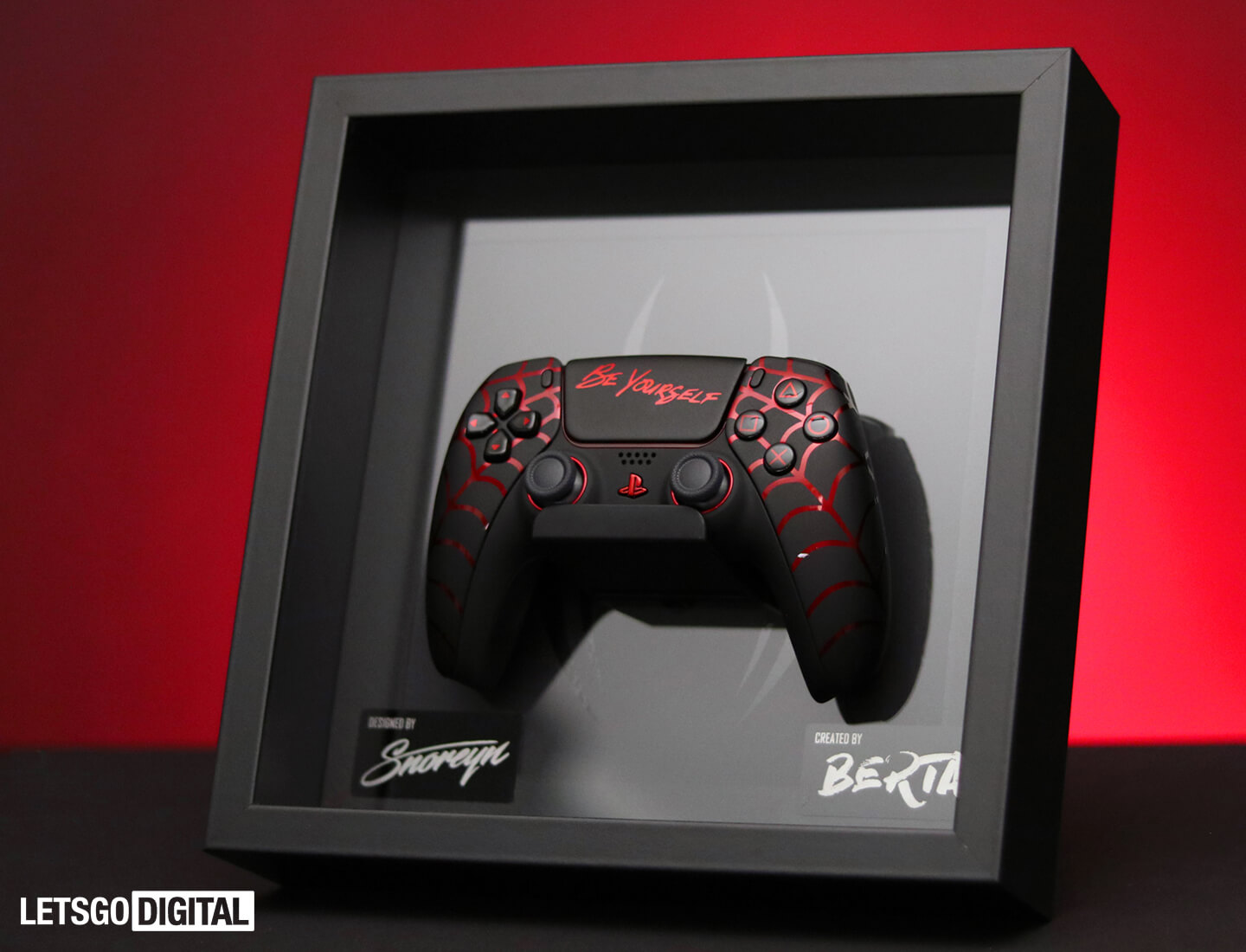 Are you planning to visit the Netherlands anytime soon? Then bring a visit to the Bonami Game Museum in Zwolle as LetsGoDigital will donate its customized Spider-Man controller to the museum. It is the Netherlands’ largest museum in the field of computers and game consoles.

Visitors to the Dutch game museum are introduced to the history of games and computers. Many game consoles are set up playable for the public – including the new PlayStation 5 and Xbox Series X. There is also a spacious retro arcade hall with over 60 arcade and pinball machines where you can play to your heart’s content.