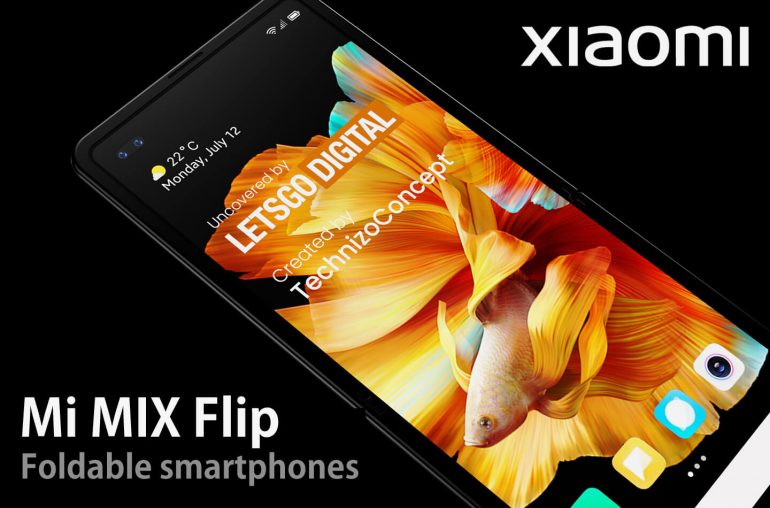 In April, Xiaomi announced its first foldable smartphone in China, the Xiaomi Mi Mix Fold. This phone has an inward folding screen that folds out to a tablet size. In terms of design, this device is very similar to the Samsung Galaxy Z Fold 2 as well as the Galaxy Z Fold 3 expected in the coming month. Through time various media have reported that Xiaomi will announce two more foldable models before the end of 2021.

In addition to the inward folding model, Xiaomi is also said to have an outward folding model in development – ​​similar to the Huawei Mate Xs. On top of that, a clamshell model is also expected – like the Samsung Galaxy Z Flip and the Motorola Razr. For the sake of convenience, we call this device the Xiaomi Mi Mix Flip – however, no information is known about the final name at the time of writing. Sometimes this model is also referred to as Mi Mix Flex.

Last week Xiaomi was awarded two design patents for a clamshell smartphone, as reported by LetsGoDigital Dutch edition. The first clamshell model showed clear similarities to Samsung’s Z Flip, the second Mi Mix Flip model seems to be a cheaper variant, without a cover display and with a camera system similar to the budget Redmi Note 9T. Both patent applications have been filed in China and Europe.

To get a better idea of ​​the design of these folding phones from Xiaomi, graphic designer  Technizo Concept has created a series of 3D renders based on the patent documentation. 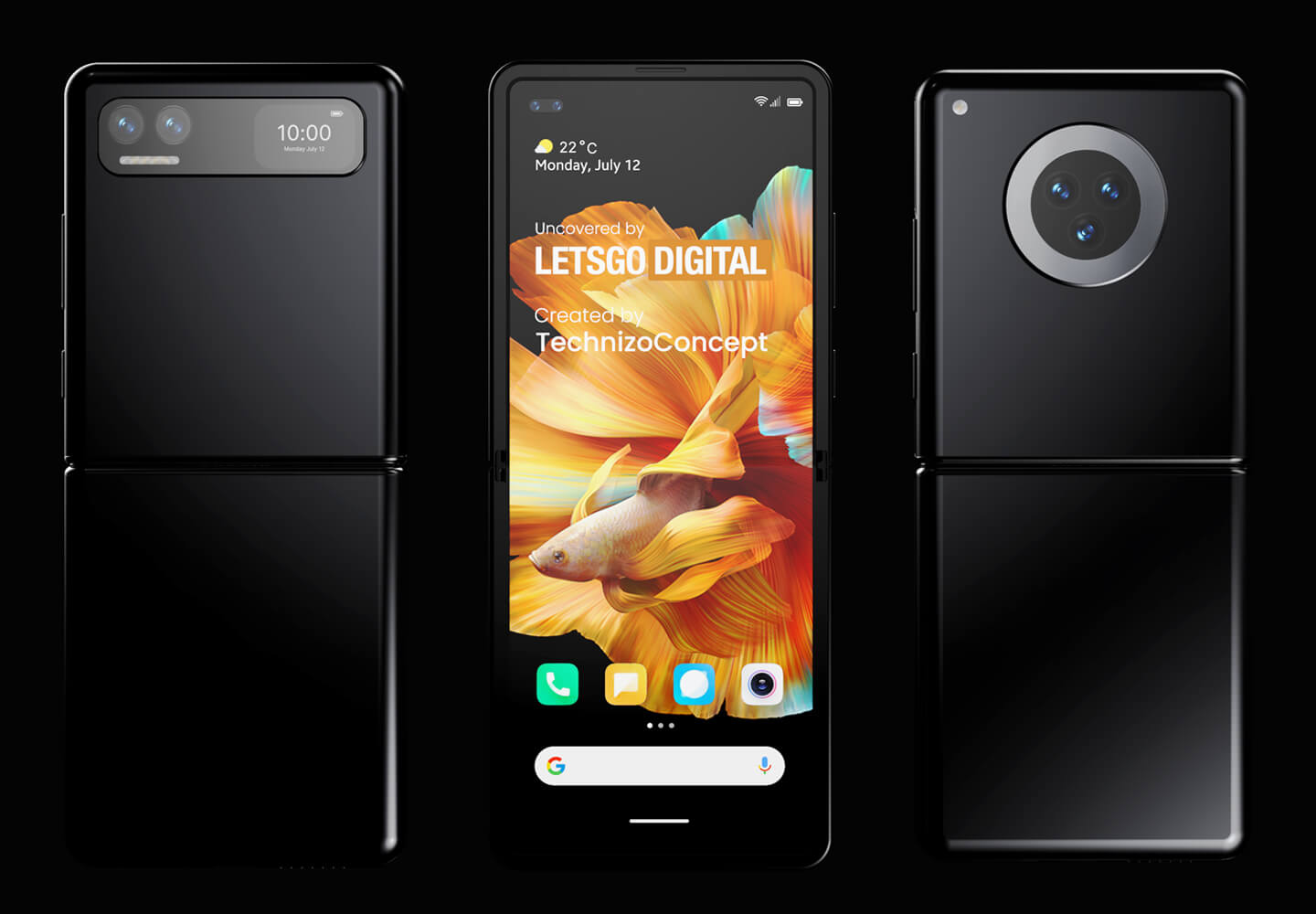 Let’s start with the similarities between the two models. Xiaomi’s patented flip phones both feature a flexible screen with a dual punch-hole camera, which is located in the top left corner. Presumably this means Xiaomi wants to target young people with this model. The screen bezels are a bit larger than those of regular smartphone models – as is the case with the Mi Mix Fold.

When the device is used in an open state the hinge disappears nicely, similar to the hide-away hinge from Samsung. Whether Xiaomi will also build in the same kind of Sweeper system as Samsung, to remove dust and dirt, remains unknown for the time being.

For now, no information is known about the display size. Presumably the size will be somewhere between 6.5” and 7”. Looking at the clamshell models announced to date, the Galaxy Z Flip 3 will feature a 6.7” screen, just like its predecessor. The Motorola Razr 5G has a significantly smaller display of 6.2″. Xiaomi will probably opt for 6.7” rather than 6.2”, all the more so because the already introduced Mi Mix Fold is the largest folding phone ever. This model comes with a flexible screen of more than 8”. 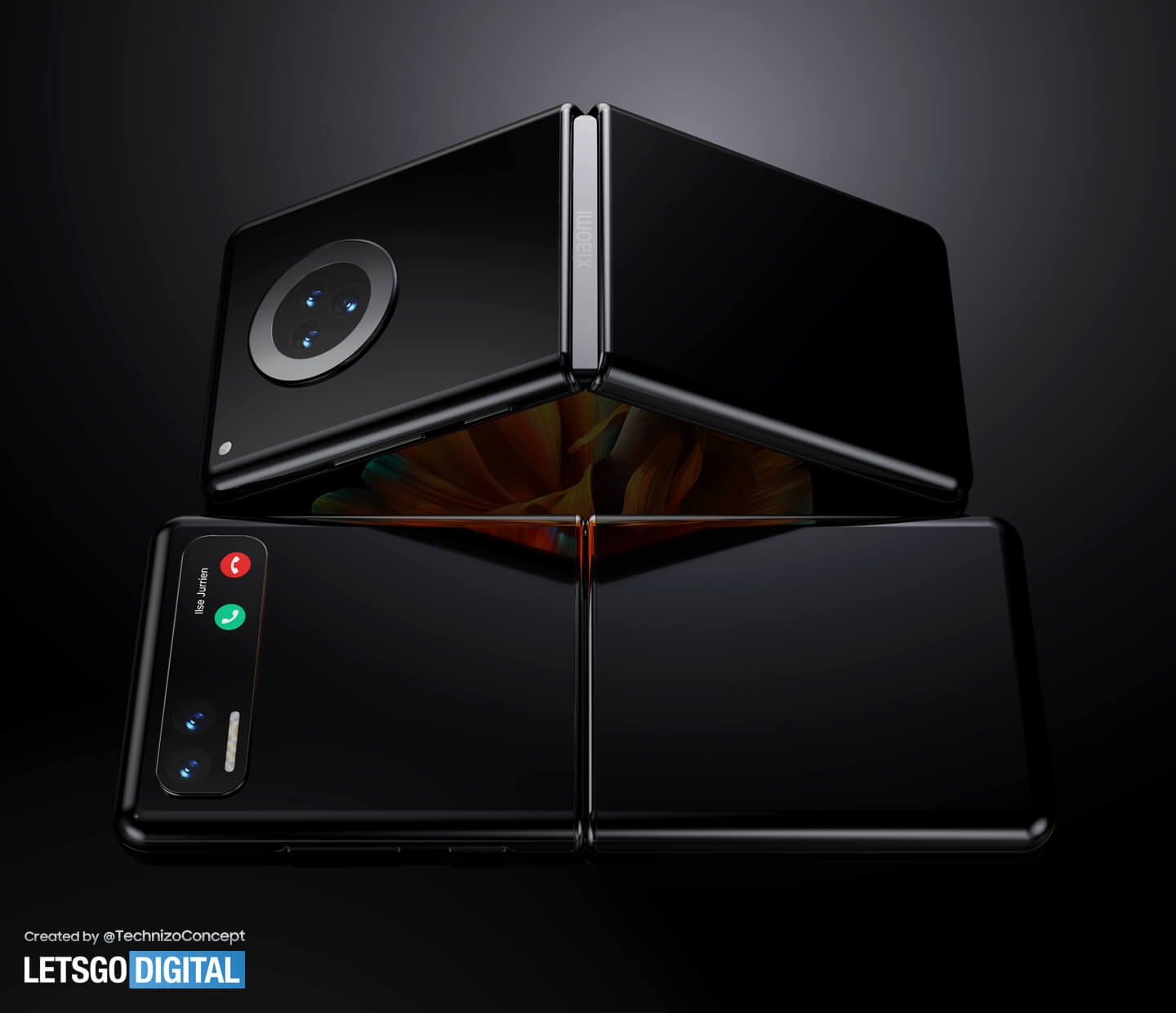 It is not inconceivable that Xiaomi will use Samsung’s UTG technology. The new Samsung Galaxy Z smartphones will be equipped with second-generation Ultra Thin Glass. Samsung Display will also make this UTG technology available to other manufacturers. It seems likely for Xiaomi to use ultra-thin glass for its clamshell too – instead of plastic, as is the case with the Mi Mix Fold. According to recent rumors, Google and Vivo will also use Ultra Thin Glass for their foldables. The Google Pixel Fold and the Vivo NEX Fold are both expected this year.

When unfolded, the two patented Xiaomi Mi Mix Flip models look identical, the buttons and ports are also identical. On the right side the on/off button and the volume buttons are located. Presumably, the fingerprint sensor is incorporated into the power button. At the bottom is a USB Type-C connection, as well as a microphone and a speaker. 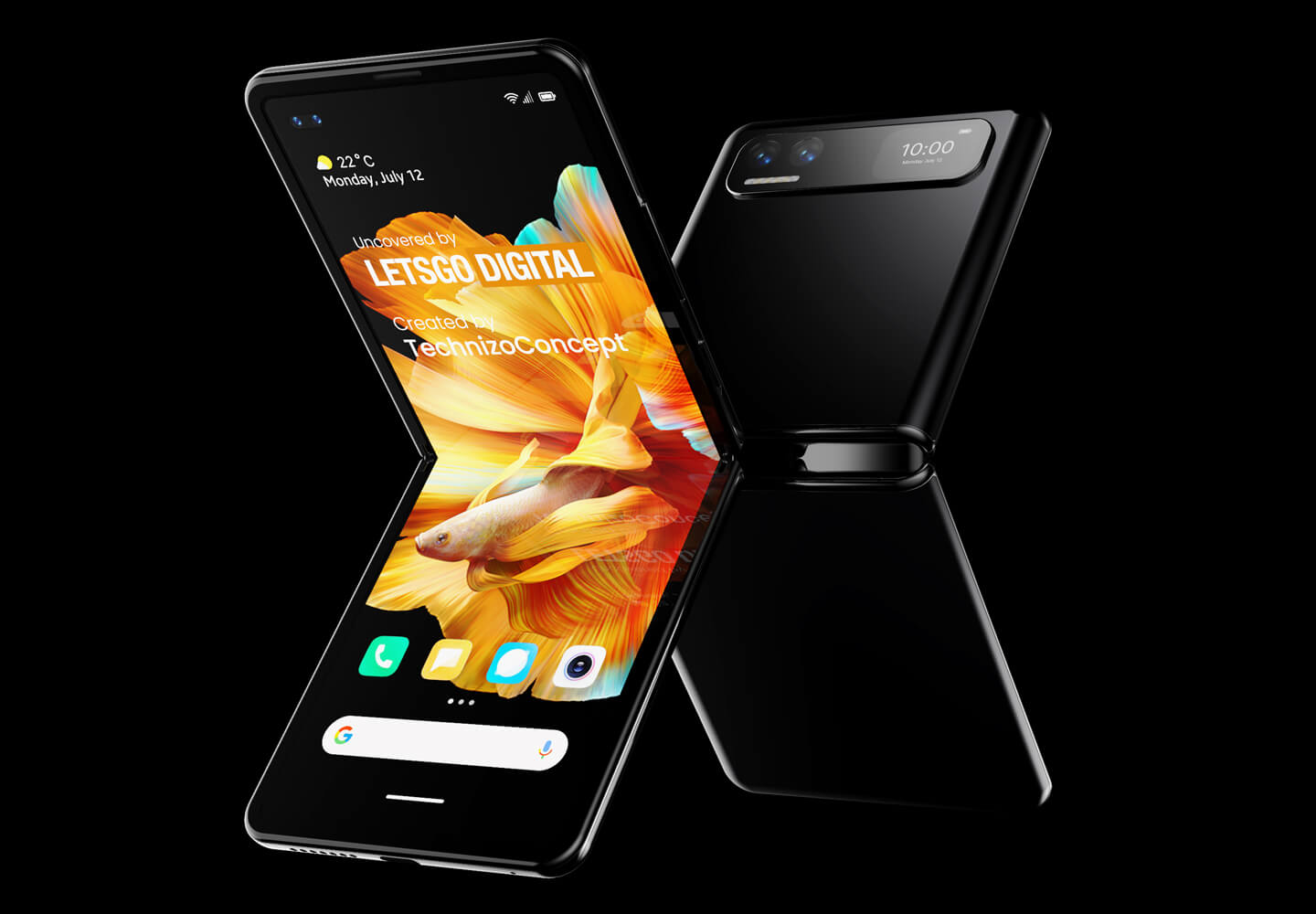 Once the two clamshells are folded, a number of distinctive differences can be observed. We start with the most advanced model. This device has a dual camera with a small cover display directly next to it. The design is very similar to the Samsung Galaxy Z Flip.

Xiaomi also offers a smartphone within its assortment with a second screen on the rear; the Xiaomi Mi 11 Ultra. This second display can serve to show general information, such as a battery indicator, the time and/or the network status. The cover screen can also be used to answer or reject incoming calls. In addition, notifications can be displayed via the small cover-display and it can be used as a viewfinder when taking selfies.

A dual camera is integrated right next to the cover screen. It features relatively large lenses. Still, the camera system protrudes minimally from the housing. This indicates that no telephoto lens is integrated. Instead, it is likely that Xiaomi will equip this model with a wide-angle and an ultra-wide-angle camera – as will be the case with the Galaxy Z Flip 3.

The Flip models are cheaper than the Fold models, which is why these devices are not equipped with the most advanced camera system. Nevertheless, you can assume that the photo quality will be more than sufficient. It is certainly not inconceivable that Xiaomi opts for a 108MP camera sensor, as it has already applied in many phone models. 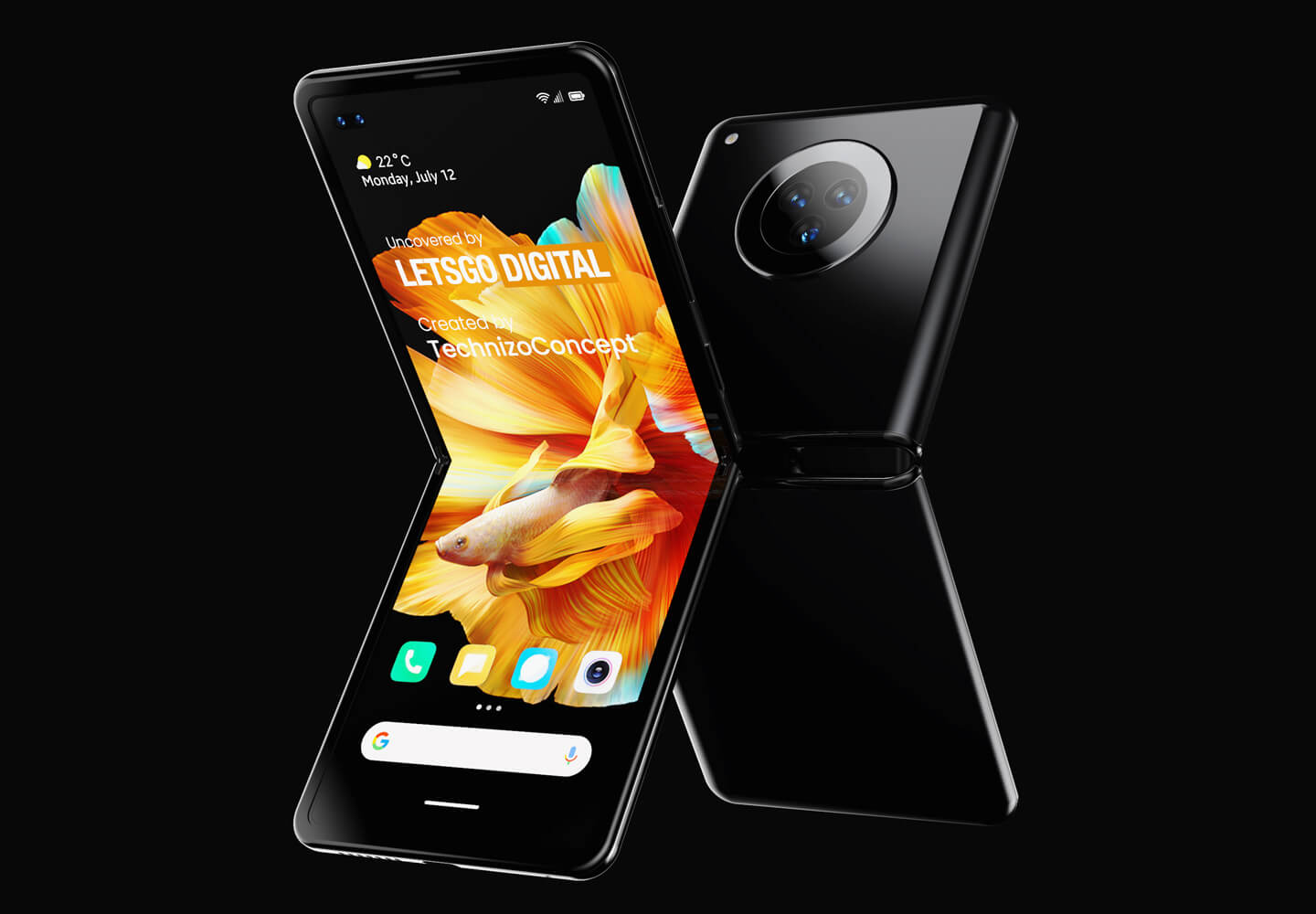 Xiaomi foldable with round camera system

When folded, the patented Xiaomi Flip is characterized by the same rounded corners as the Fold model. In terms of design, it would fit well within Xiaomi’s current foldable smartphone portfolio. Personally, I expect that the first clamshell phone from Xiaomi will feature a cover display.

It is certainly not inconceivable that the company will eventually also release a Xiaomi Mi Mix Flip Lite – possibly that this device will not feature a cover screen to reduce costs and to make the foldable phone accessible to a broader audience.

This brings us to the second folding model that Xiaomi has patented. For your information, both patent applications were filed on the same day (September 30, 2020) and also released on the same day (July 9, 2021). So it is not the case that one design is newer than the other.

As already mentioned, the second model broadly resembles the first discussed design. The hinge and flexible screen with dual punch-hole camera are identical. However, the rear camera system is completely different. This time, Xiaomi has opted for a round design in which three camera lenses are integrated. Also noteworthy is the small circle at the top left of the housing. This may be the LED flash or a notification light – the latter could be a handy solution due to the lack of a second display. In any case, the design is very similar to the extremely affordable Redmi Note 9T.

Just as striking as the design of the camera system is the absence of a cover display. The Motorola Razr in particular is often praised for its large 2.7” cover screen. Samsung will also increase the cover screen of the Galaxy Z Flip 3 expected in the coming month. The 1.1” display of the Z Flip will most likely be replaced by a 1.83” screen. The fact that Xiaomi completely omits the second screen with this model shows that it is a cheaper model.

For now it remains unknown when Xiaomi will launch its first clamshell and whether this new model will also be released outside of China. In any case, it seems likely that Xiaomi will also release foldable smartphones in Europe in the long run.

Take a look at Xiaomi Flip with cover display and the Xiaomi foldable with round camera.

Note to publishers : The product renders in this publication are created by Technizo Concept in collaboration with LetsGoDigital. The presented images are for illustrative purposes only, the design is based on two patents of Xiaomi Mobile Software. You can use the copyrighted images for your own website, YouTube and/or social media channels, please be so respectful to include a clickable source link into your publication.