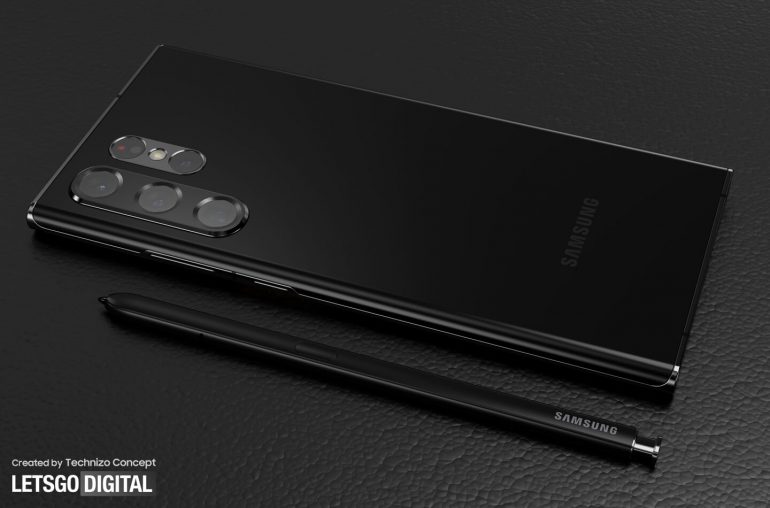 The Galaxy S22 Ultra will be Samsung’s new top model, expected at the beginning of 2022. Read all about the design, specs, price and release date.

In the first quarter of 2022, Samsung will unveil its new Galaxy S series smartphones. Many Galaxy fans are already eagerly awaiting the new model range, which will likely consist of three models: the Galaxy S22, Galaxy S22 Plus and the Galaxy S22 Ultra. In particular the top model will be revised in such a way that it will have a lot of similarities with the Galaxy Note line-up. Instead of round shapes, the Galaxy S22 Ultra gets a rectangular design to provide space for an S Pen compartment.

A lot has been said and written about the new S-series 2022 models in recent weeks. Based all rumors and speculation, the talented graphic designer Parvez Khan, aka Technizo Concept, has created a series of 3D renders of the Samsung Galaxy S22 Ultra in collaboration with LetsGoDigital.

The Samsung’s expected flagship will likely arrive in three colors: black, white and dark red. According to Ice Universe, it is ‘Burgundy Red’, as we know from the Galaxy S8 and S9. The product renders of Technizo Concept show the very same color scheme. 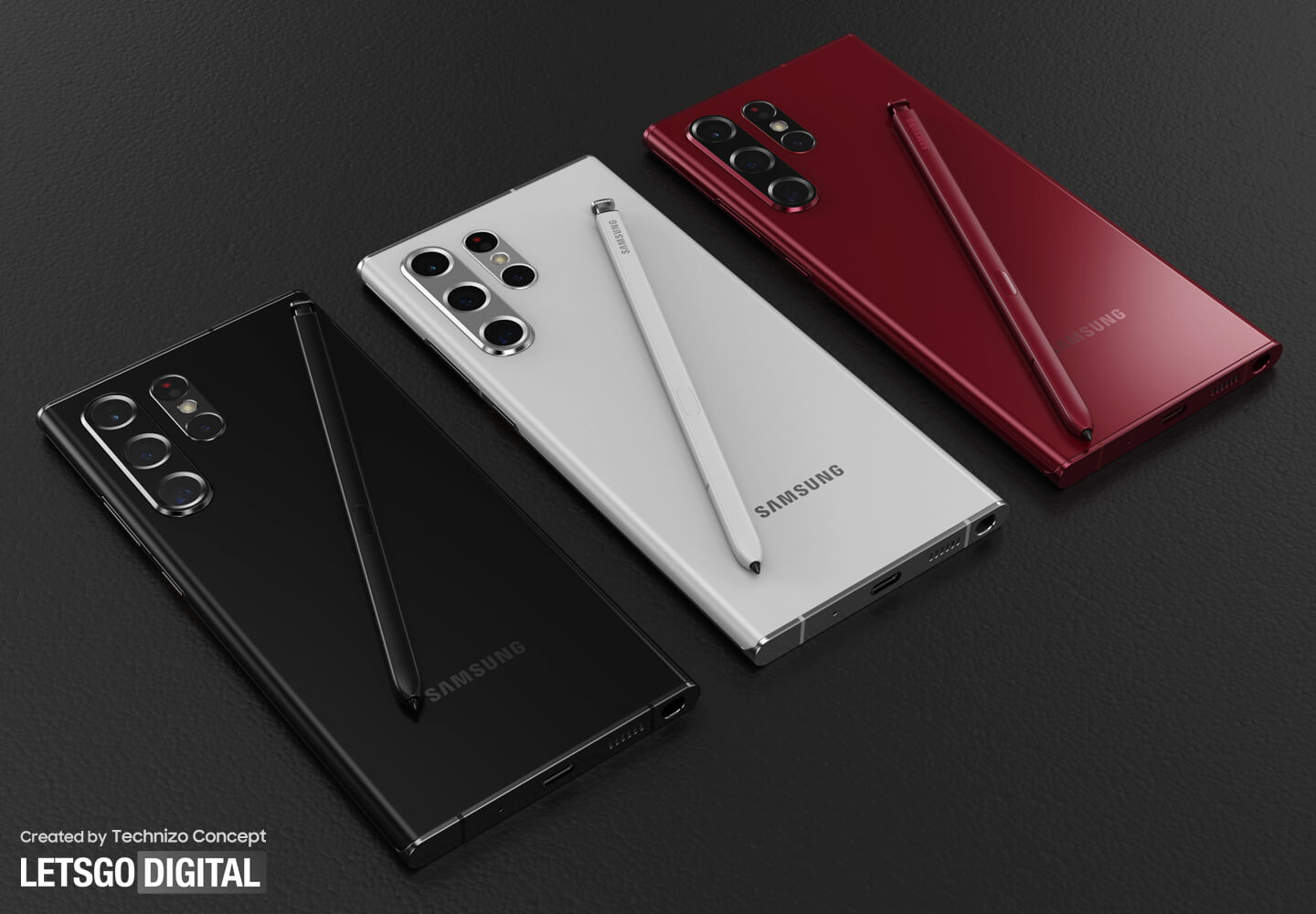 Although a lot is already known about the design, there is still a lack of clarity about the rear camera system. Two options have been widely discussed on the internet: Samsung opts for a P-shaped or an 11-shaped camera system.

Last weekend, cover manufacturer Cover Pigtou posted a YouTube video showing an aluminum dummy of the Samsung S22 Ultra. The images show a P-shaped camera design – similar to OnLeaks renders. Some believe that this is the final design.

However, this cannot be said with certainty. Such dummy phones are used by, among others, case manufacturers such as Cover Pigtou to be able to develop suitable phone cases for the new line-up. This means that only the outline of the camera system is known and not the inside.

For the product renders Technizo Concept has modified the design slightly. The outline still shows a P-shaped design – similar to the aluminum dummy. However, by making it a dual-camera island, the design looks more in line with the existing Galaxy line-up.

In addition, another important advantage arises: the weight. This camera system will be lighter compared to the P-shape camera design. This way Samsung can effectively compensate for the extra weight that comes with the integration of an S Pen compartment.

When it comes to the camera configuration, Samsung is expected to incorporate a 108MP main camera. In addition a 12MP ultra-wide camera and two 12MP telephoto cameras with 3x and 10x optical zoom will be integrated.

The ultra-wide-angle camera will be equipped with OIS for the first time. This means that all four cameras will have an optical image stabilization system to prevent motion blur. In addition, the resolution of the two zoom cameras will be increased – from 10MP to 12MP. The laser autofocus sensor will also be present again, as well as an LED flash. 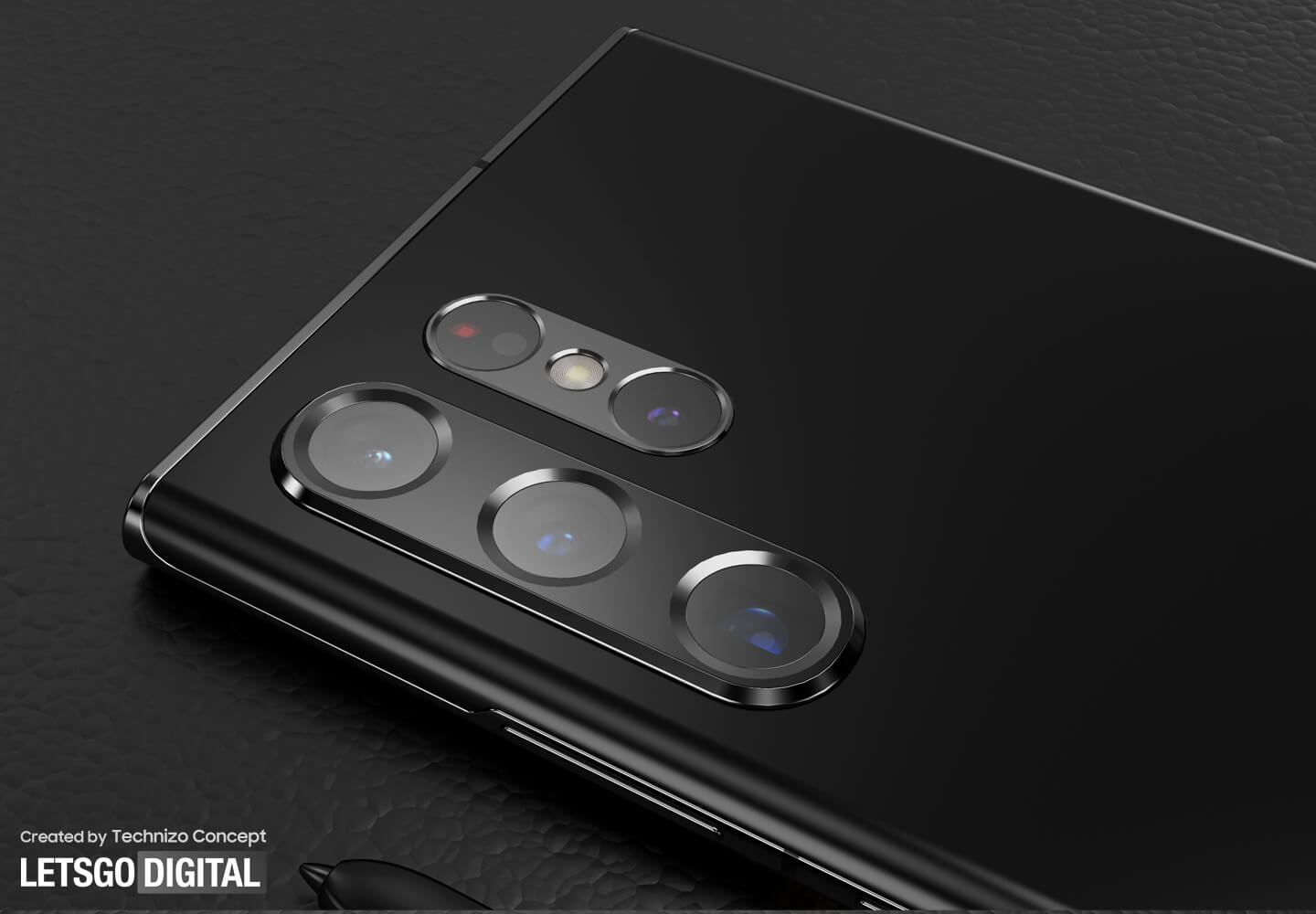 The Samsung S22 Ultra is expected to be equipped with a 6.8-inch curved AMOLED display. The flagship phone will have small bezels. In addition a punch-hole selfie camera will be integrated, similar to the Galaxy S21 Ultra. It will most likely contain the same 40 megapixel resolution image sensor.

For the first time, the S-series top model will be equipped with an S Pen compartment. The stylus pen can be inserted via the left bottom, similar to the Galaxy Note 20 Ultra. Although the current S21 Ultra is also compatible with the S Pen, this device does not have a compartment. Instead, you’ll need to buy a case with an S Pen pocket to store the stylus.

In order to make room for a stylus compartment, Samsung has to revise the rounded corners that are so characteristic of the S-series. Therefore the new model will have much more similarities with the straight-shaped Note series. 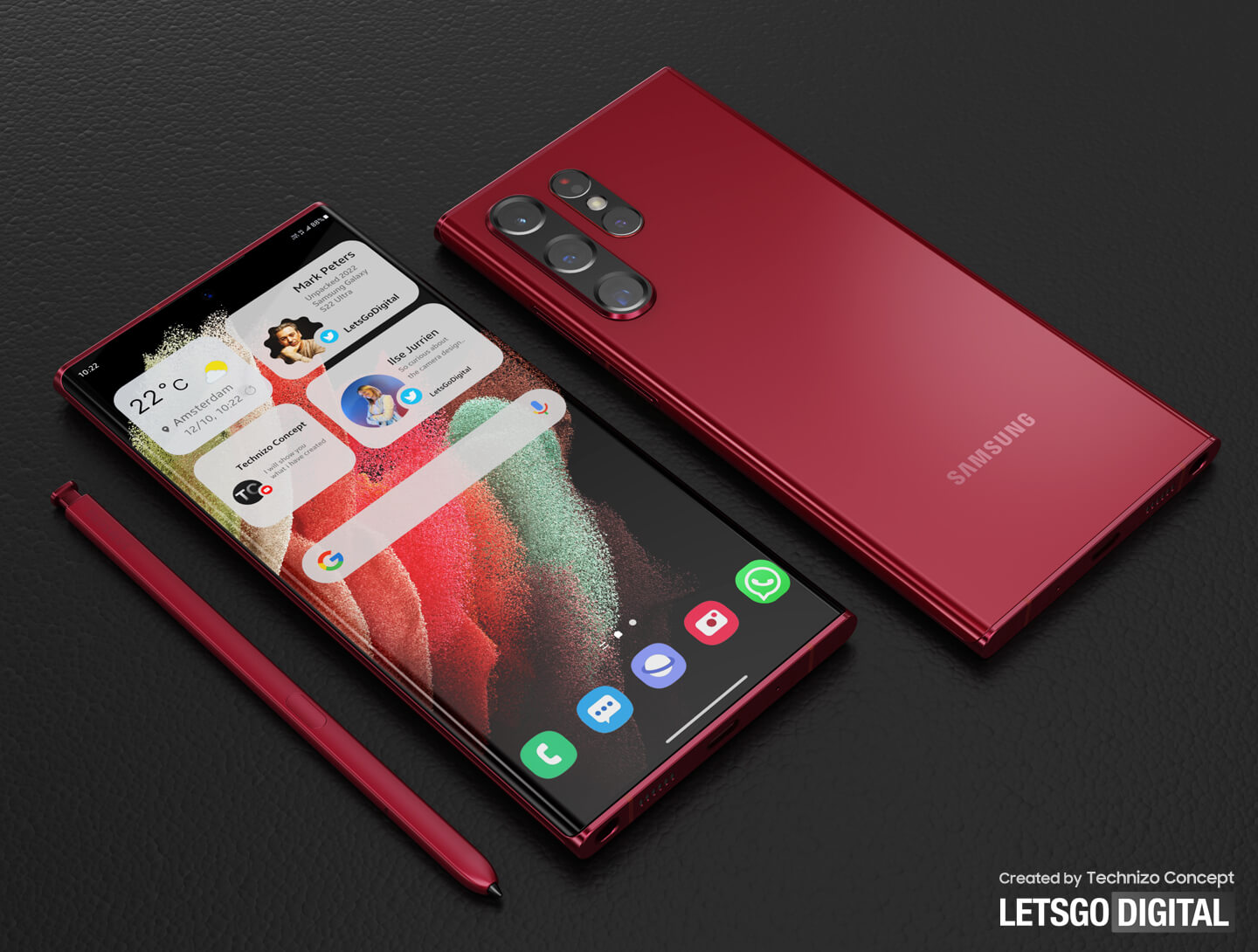 By equipping the new flagship with a stylus compartment, Samsung can keep its Note users happy. After all, no Galaxy Note 21 has appeared this year. It seems Samsung has decided to merge the Galaxy S and Note model series.

By merging the high-end S and Note series and introducing them at the beginning of the year, there will be enough time for the folding models in the second half of the year. Just like the Galaxy Z Fold 3 and Galaxy Z Flip 3 were both presented in August this year, during Galaxy Unpacked – ​​where the Note should normally have arrived.

Out of the box, the S22 series will run on Android 12 OS in combination with Samsung One UI 4. The European models will be driven by a Samsung Exynos 2200 SoC with AMD GPU. The Qualcomm Snapdragon 895 / 898 will be used in most other parts of the world.

Furthermore, the Samsung S22 Ultra is expected to be equipped with a 5,000 mAh battery. The smartphone will likely offer support for 45W fast charging – which would be a welcome upgrade compared to 25W charging on the S21 Ultra. Just like this year, no charger will be included in the sales box. 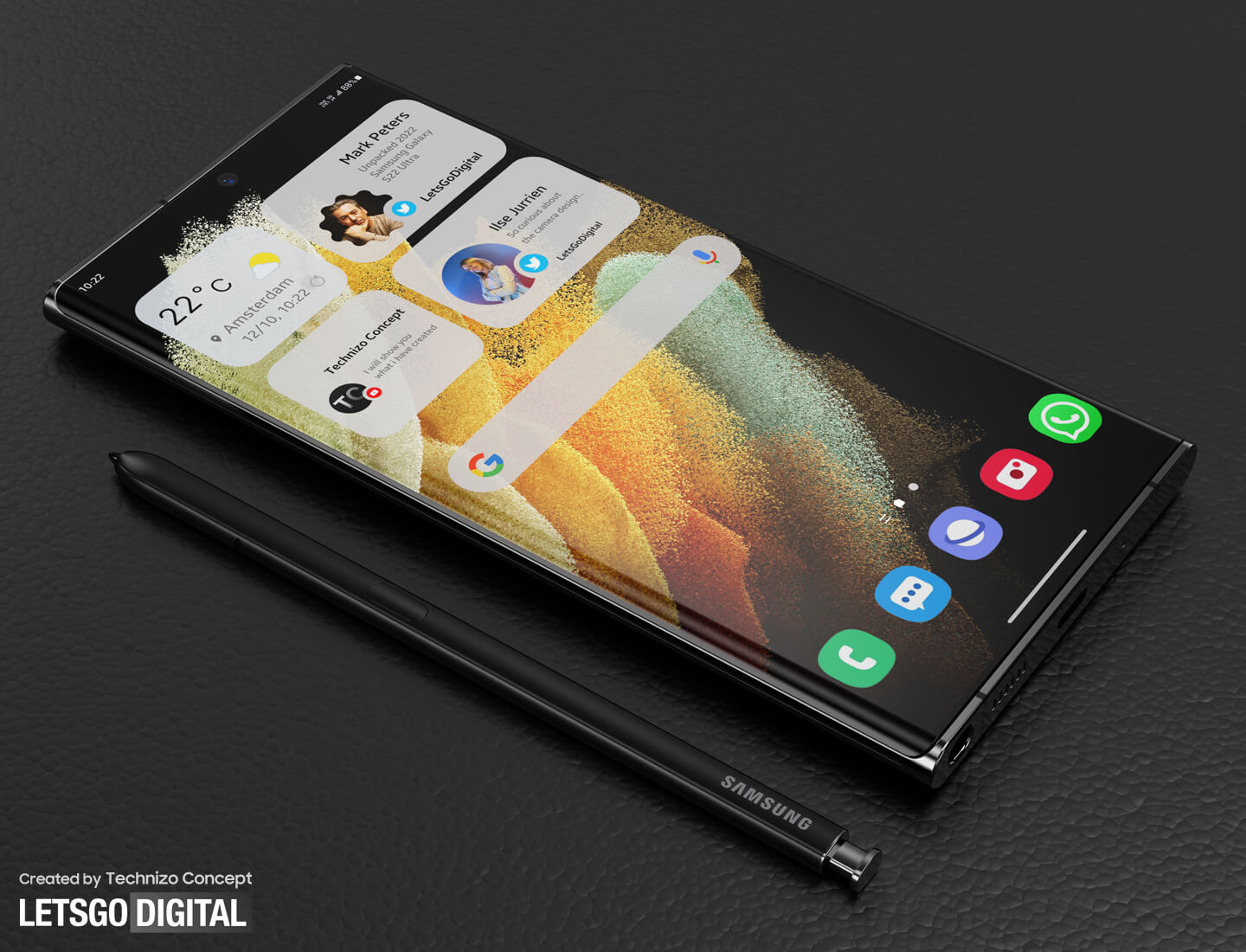 There is still some uncertainty about the release date. This year, Samsung chose to introduce and release the Galaxy S21 series in January. For a long time, it was assumed that the South Korean manufacturer will follow the same strategy in 2022. In this way an optimal spread can take place with the high-end devices that will be introduced in August.

However, due to the persistent chip shortages, the Galaxy S21 FE has still not been introduced. According to the most recent rumors, Samsung will release this smartphone in January, which would mean that the introduction of the S22 series will be postponed by a month. The new line-up will then be put on display at MWC 2022, the annual fair starts on February 28, 2022 in Barcelona, Spain.

Last year, the Galaxy S21 Ultra was put to market for a suggested retail price of €1,250 (12GB / 128GB). There is a good chance that the Galaxy S22 Ultra will cost a little bit more. After all, it is likely that the new model will be supplied with S Pen as standard – since the device will be equipped with a stylus compartment this time. 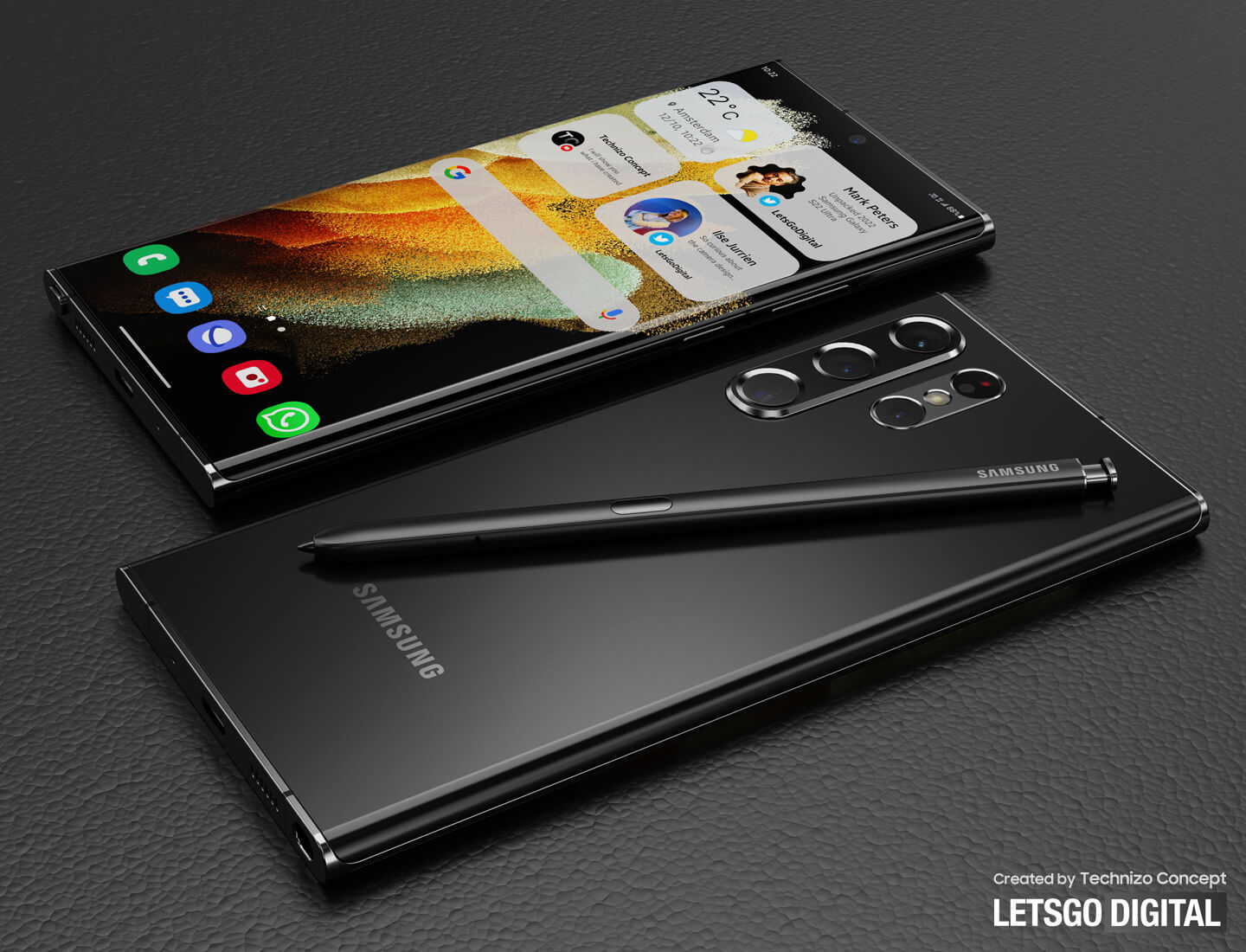 Note to publishers :  The Samsung Galaxy S22 Ultra product renders are created by Parvez Khan, aka Technizo Concept, in collaboration with LetsGoDigital. The 3D renders are based on rumors and meant for illustrative purposes only. This product is not (yet) for sale. You can use the copyrighted images for your own website, YouTube and/or social media channels, please be so respectful to include a clickable source link into your publication.