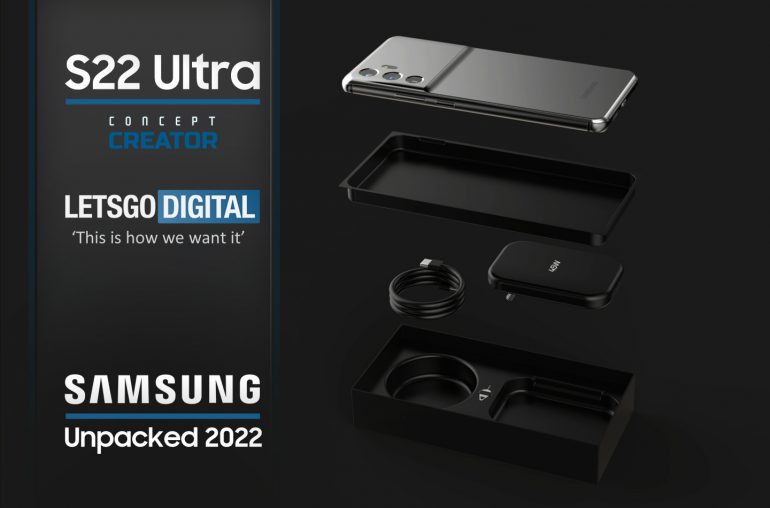 Concept of Samsung Galaxy S22 Ultra shows a renewed design with an under display camera, a microSD compartment and a 3.5mm headphone jack.

The Galaxy Unpacked 2021 August event is already behind us. The Samsung Galaxy Z Fold 3 and Galaxy Z Flip 3 have been officially announced, as have the Galaxy Watch 4 and Watch 4 Classic smartwatches and the Galaxy Buds 2 earbuds. The Galaxy S21 FE has yet to arrive, as the cheapest and last S-series 2021 device. For the real innovations, however, we will have to wait for the Samsung Galaxy S22 series which is expected to be released at the beginning of 2022.

Since it takes another half year before the Samsung S22 series will be officially announced, many details are still unknown. However, this has not prevented Dutch graphic designer Jermaine Smit, aka Concept Creator, from creating its own concept of the new S-series top model, the Samsung Galaxy S22 Ultra.

Jermaine has adopted the motto; “Back to the essentials”. In other words; bring back all the essentials and stop leaving out features that users have become attached to. Think of the 3.5mm jack, a microSD compartment and of course the charger. A few years ago, these functionalities were still considered standard, nowadays you can call it a rarity. Unfortunately, the titans Samsung and Apple have been at the forefront of these unwanted changes. 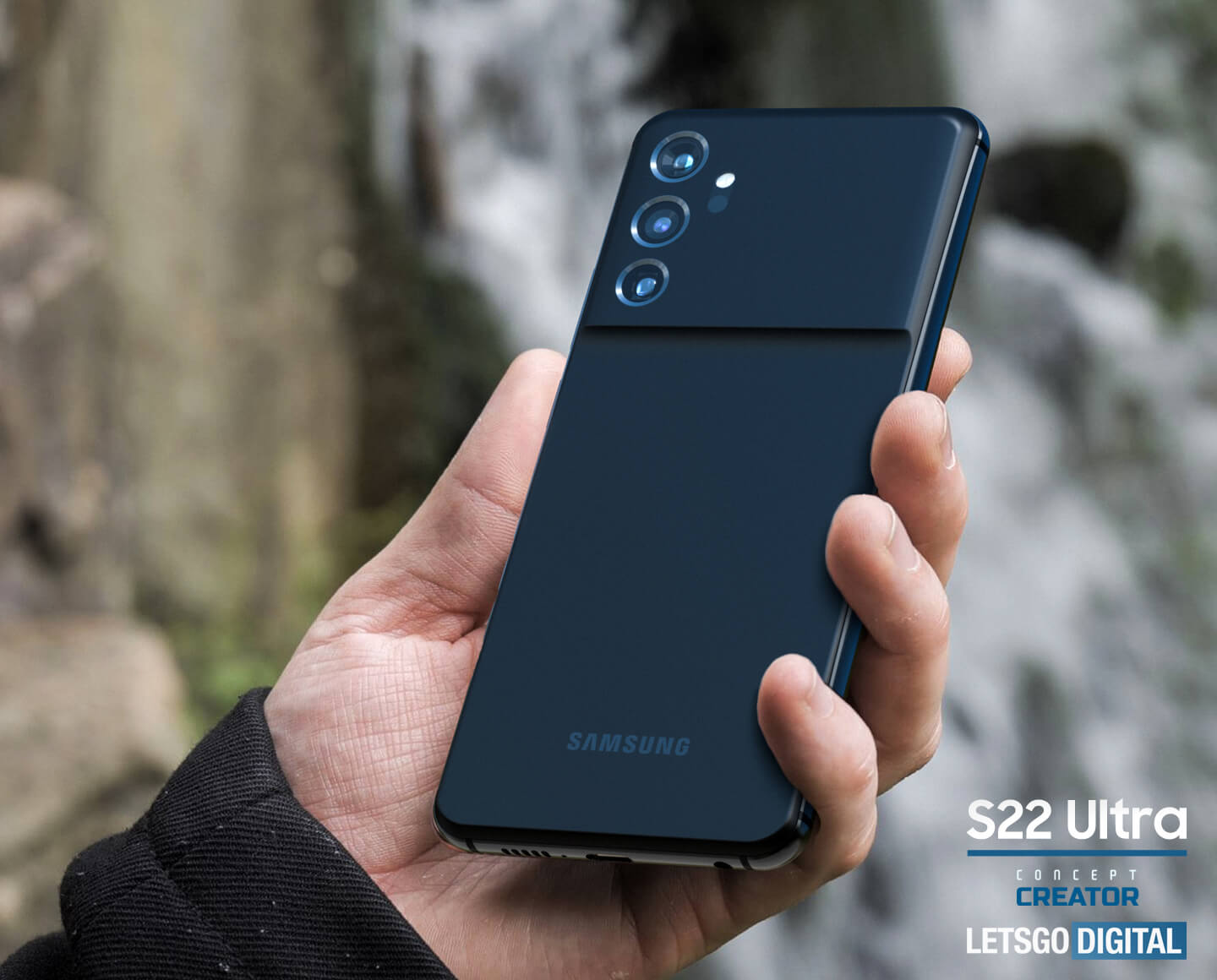 Samsung is expected to announce three models next year – followed by a cheaper Galaxy S22 FE in the second half of 2022. In addition to a vanilla model, a Galaxy S22 Plus and an S22 Ultra are expected. The Ultra will offer several additional features compared to the other two models. The flagship will have the largest screen, this will also be the only model with a curved display. It will likely contain a 6.81-inch curved display with a 120Hz adaptive refresh rate.

Looking at the current S series, the Galaxy S21 Ultra is the only device that offers S Pen support. This smartphone is also equipped with the most advanced camera system ever. However, some concessions have also been made. The phone is no longer equipped with a 3.5mm headphone jack and unfortunately also lacks a microSD compartment.

The headphone jack has been missing out on high-end Samsung smartphones for some time already. This still leads to disappointment among many audio enthusiasts. It is of course possible to use wireless Bluetooth earbuds, such as the new Galaxy Buds 2 and the Galaxy Buds Pro. Nevertheless Jermaine would rather see Samsung to add a 3.5mm headphone jack again – as is the case with the high-end Sony Xperia 1 III for example. Therefore his Galaxy S22 Ultra concept shows a headphone jack which is included at the bottom of the device.

There is also a microSD compartment. At the top left, there is a SIM card holder, which also offers space to insert a microSD memory card. The Galaxy S21 series from Samsung no longer supports a microSD card, limiting users to cloud solutions to expand the storage memory.

This decisions also contributes to many users not choosing to buy the basic model with 128GB, but instead opt for 256GB or 512GB storage memory. The disadvantage of this is that extra storage memory is significantly more expensive than buying a microSD memory card with the same memory capacity.

It goes without saying that this is a concept smartphone. Chances are very small that Samsung will actually decide to bring back the 3.5mm jack and the microSD slot.

That brings us to the third part that was once so normal, but is no longer included in the box as standard. I am talking about the charger of course.

A few years ago, no one could have imagined that something as essential as a charger could no longer be found in the sales package. By using the environment as an argument, manufacturers have come up with a legitimate reason for themselves to omit this necessary charger.

Jermaine obviously does not agree with this decision, therefore his Samsung Galaxy S22 Ultra 5G concept is still delivered in a thick sales box with a charger included. Again; this is a concept; Samsung is not expected to truly change its strategy in this aspect.

Samsung has recently made some more remarkable choices regarding the charging options too. Apart from whether or not a charger is included, the fast charging technology has not really improved either. The entire Galaxy S21 series -including the S21 Ultra- offers support for 25W Fast Charge. While the S20 Ultra, released one year earlier, was already equipped with 45W fast charging technology. Therefore Jermaine decided to include a 45W Fast Charger in the box.

In the meantime, competition has not stood still. Especially Chinese brands all offer support for 65W or higher. The Xiaomi Mi 10 Ultra and the recently released Xiaomi Mi Mix 4 even feature 120 Watt fast charging technology. A charger is also still supplied by these brands.

However, in the background Samsung does seem to be making progress in terms of charging technologies. Earlier this year, a 65W charger from Samsung appeared online, the Galaxy S22 Ultra might be the first smartphone to offer support for this fast charging technology. The battery capacity of 5,000 mAh will probably remain the same. 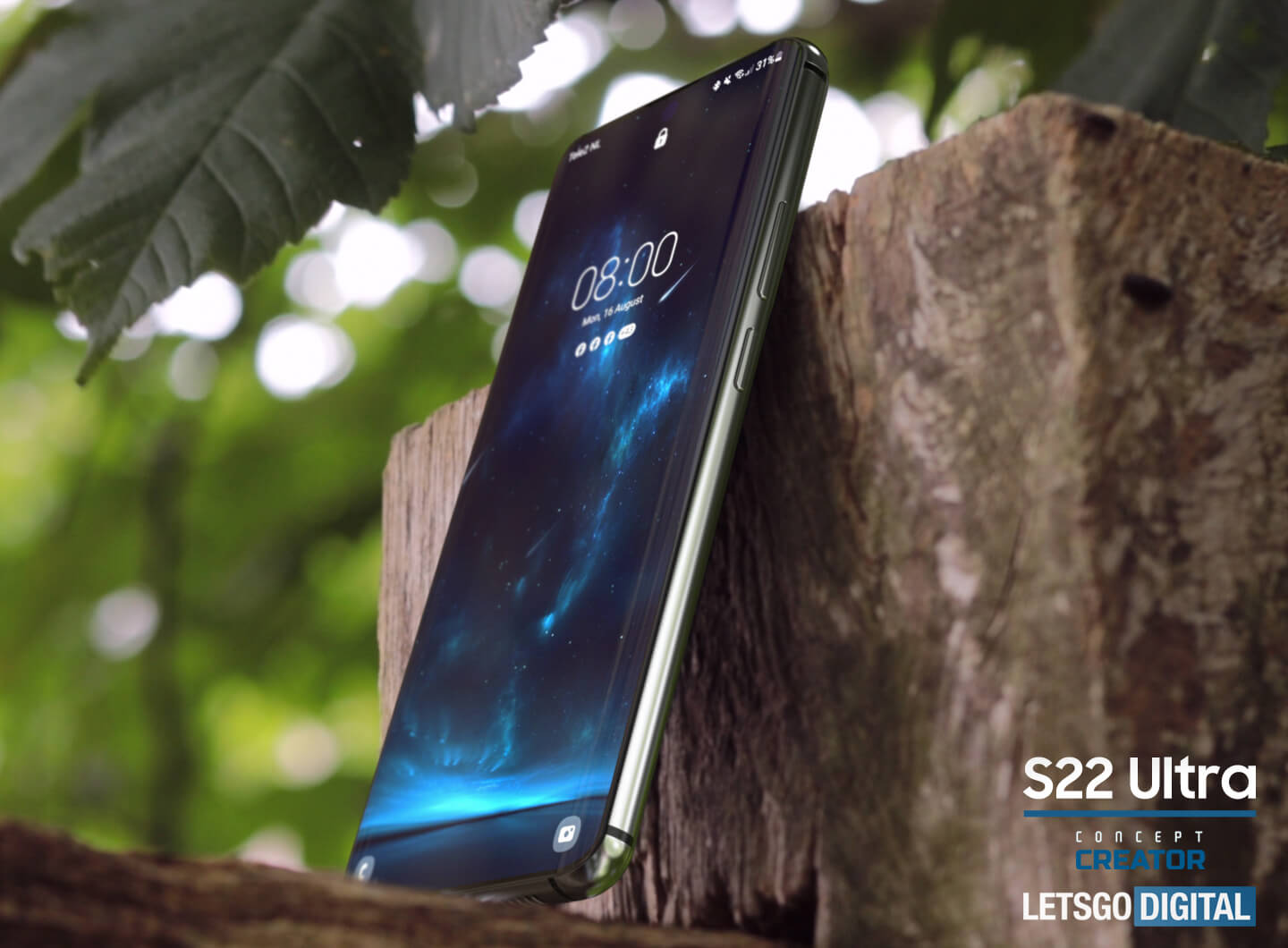 Jermaine has also made some notable changes to the camera system. To start with the front camera. The concept smartphone features an under-display camera. The recently introduced Galaxy Z Fold 3 is the first Samsung smartphone with an under screen camera.

The question remains which solution Samsung prefers for future models. Personally, I don’t expect the S22 Ultra 5G to be equipped with an under-panel camera. The main reason for this is that the image quality is not good enough. In addition the camera is still quite visible – despite being located below the screen. It is therefore more likely that Samsung will again opt for a 40 megapixel punch-hole selfie camera, with which you can take excellent selfies by the way.

In addition, the rear camera has also been revised by Jermaine. The triple camera consists of a wide angle, an ultra-wide angle and a telephoto lens. The telephoto lens has a variable aperture, meaning the double telephoto lens of the S21 Ultra – with 3x and 10x optical zoom – is no longer needed.

Earlier this year there were rumors Samsung has started a partnership with the Japanese system camera and lens manufacturer Olympus. We may already see the first results of this collaboration with the Galaxy S22 series. In Juni this year this has inspired graphic designer Technizo Concept to create a Galaxy S22 Ultra concept with a gigantic Olympus camera with a 200 megapixel image sensor.

Since then, however, there have been several signs Samsung’s new 200MP camera will not be used in the S22 series yet. Likely Xiaomi will be the first to apply this image sensor, as was also the case at the time with the 108MP Samsung sensor – which was first used in the Xiaomi Mi Note 10. We therefore expect that the new top model of the S series will again feature a 108 megapixel main camera. The collaboration between Samsung and Olympus may lead to new lens technologies, such as sensor shift technology – as we know from the iPhone 12 Pro Max and the OnePlus 9 Pro with Hasselblad camera.

Jermaine has also revised the camera design of the S22 Ultra, the top is thicker over the entire width. The advantage of this is that the device will wobble less when it is laying on a table, because it is supported over a wider surface. The top part will of course be slightly higher while laying on a flat surface, but that will only benefit the visibility of the screen.

As the battery will be housed in the bottom part the weight balance will still be good and the phone will still be comfortable to handle. In addition, this design creates extra space in the housing, leaving enough space to integrate the SIM card compartment with microSD slot on the top – meaning it can be left out at the bottom, as was the case with the S21 Ultra. However, we prefer that this space remains reserved to be able to build in as large a battery as possible. 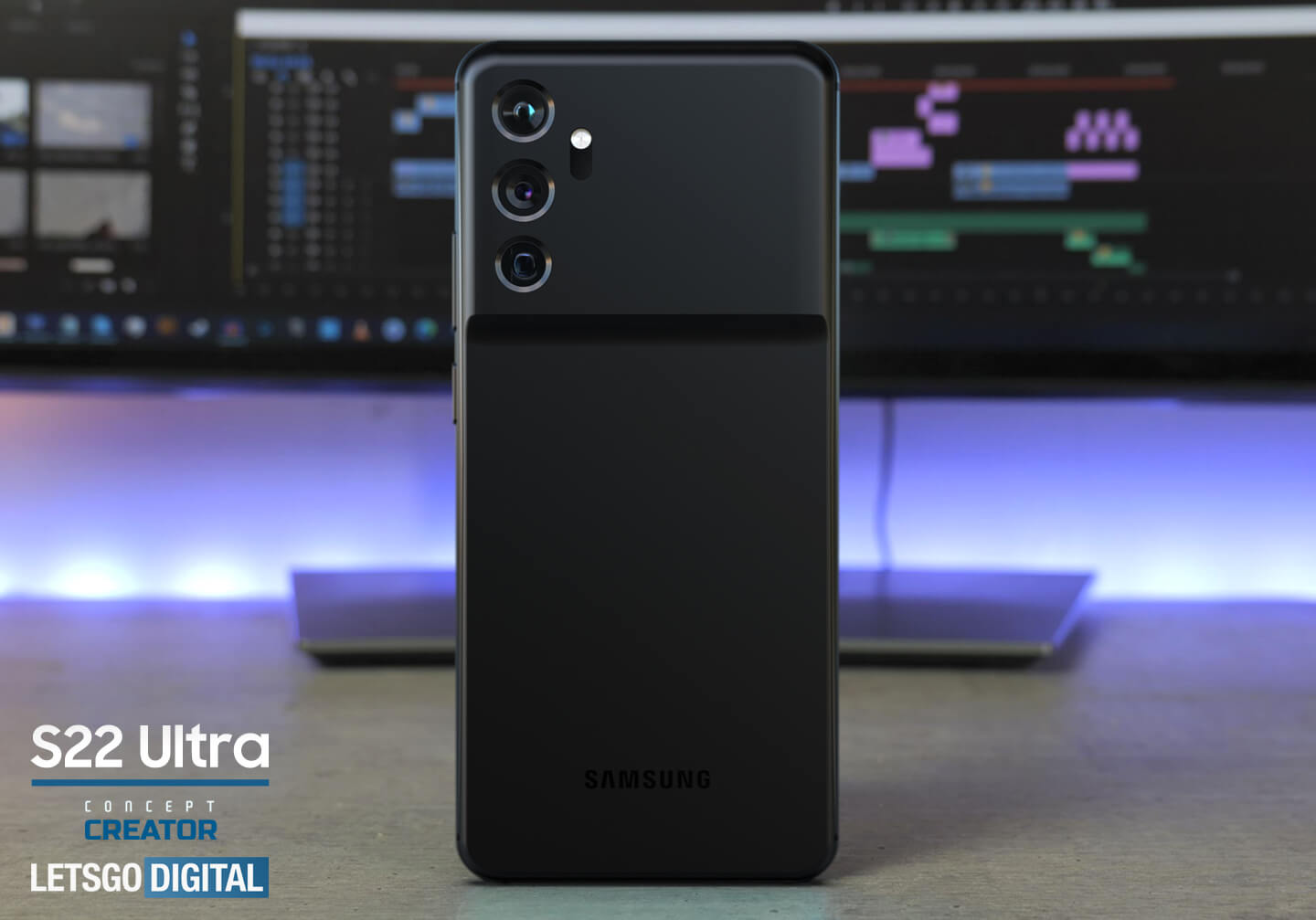 A top model like the Galaxy S22 Ultra will of course be driven by a powerful chipset. Samsung normally opts for two different chips for its S-series models – the Qualcomm Snapdragon variant is usually used in the US and South Korea, the Samsung Exynos counterpart is used for Europe and other parts of the world.

The Exynos 2200, which will be used for the S22 series, will be Samsung’s first chipset with a AMD Radeon GPU with RDNA2 architecture and support for ray-tracing and variable rate-shading. Recently Tron shared a message via Twitter revealing that the Exynos 2200 will only be incorporated in a small number of S22 devices. Most devices will be driven by the Qualcomm Snapdragon 898 counterpart.

As for the software, like all Galaxy smartphones, the Samsung S22 will run on Android OS. Android 12 will be available by then, for which Samsung will design a matching One UI 4 user interface. The South Korean manufacturer nowadays offers 3 years of Android OS updates and 4 years of firmware updates (5 years for the business Enterprise variants).

When it comes to the S Pen you may assume that the Galaxy S22 Ultra 5G will also be compatible with Samsung’s stylus. The S21 Ultra was the first and as yet the only S-series model that can be used with the S Pen – which is offered as an optional accessory. In addition, users can buy a cover with a built-in compartment to store the S Pen. At the time of the Z Fold 3 introduction, Samsung also released a S Pen Pro with Bluetooth functionality – which can also be used in combination with the Ultra model.

Samsung will be committed to making the new S-series a success. Sales of the 2021 S-series models were very disappointing, despite a serious price reduction compared to the 2020 models. Possibly this will result in another price reduction for the Samsung Galaxy S22 line-up. Hopefully this time without removing any features. As time goes by, more details on the new 2022 S-series devices will undoubtedly emerge. The Samsung S22 series is expected to be introduced in January 2022.

Before the 2022 models will be announced, the Samsung Galaxy S21 FE will arrive first. This smartphone was initially planned for August, but due to chip shortages the release has been postponed to autumn 2021. A Galaxy Note 21 is no longer expected this year, but a Galaxy Note 22 will likely appear in the second half of next year. Meaning there are still plenty enough new Samsung devices to look forward to.

Note to publishers : The product renders in this publication are created by Dutch graphic designer Jermaine Smit, aka Concept Creator, in collaboration with LetsGoDigital. The 3D concept renders are for illustrative purposes only, this concept smartphone is not for sale. Samsung is expected to launch the Galaxy S22 series during the Galaxy Unpacked 2022 event in January. The design of these new smartphones are unknown at the time of publication. You can use the copyrighted images for your own website, YouTube and/or social media channels, please be so respectful to include a clickable source link into your publication.