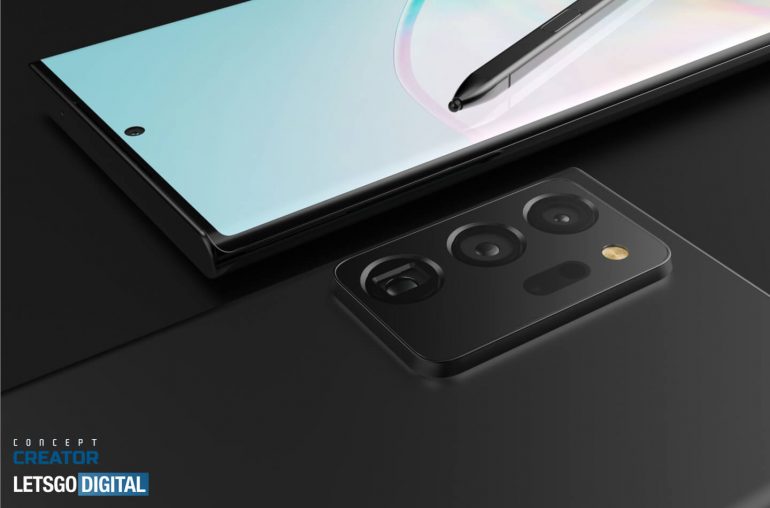 On Wednesday, August 5, Samsung will unveil the Galaxy Note 20 smartphone series. Read all about the specs and design of the new flagship models here.

The leaked images show a beautiful bronze colored smartphone, called “Mystic Bronze”. There have been rumors for some time that the Samsung Note 20 smartphones will be carried out in bronze, among other colors. The product images of Samsung Russia therefore worked as a confirmation. The photos only showed the back of the device in combination with the famous S Pen. 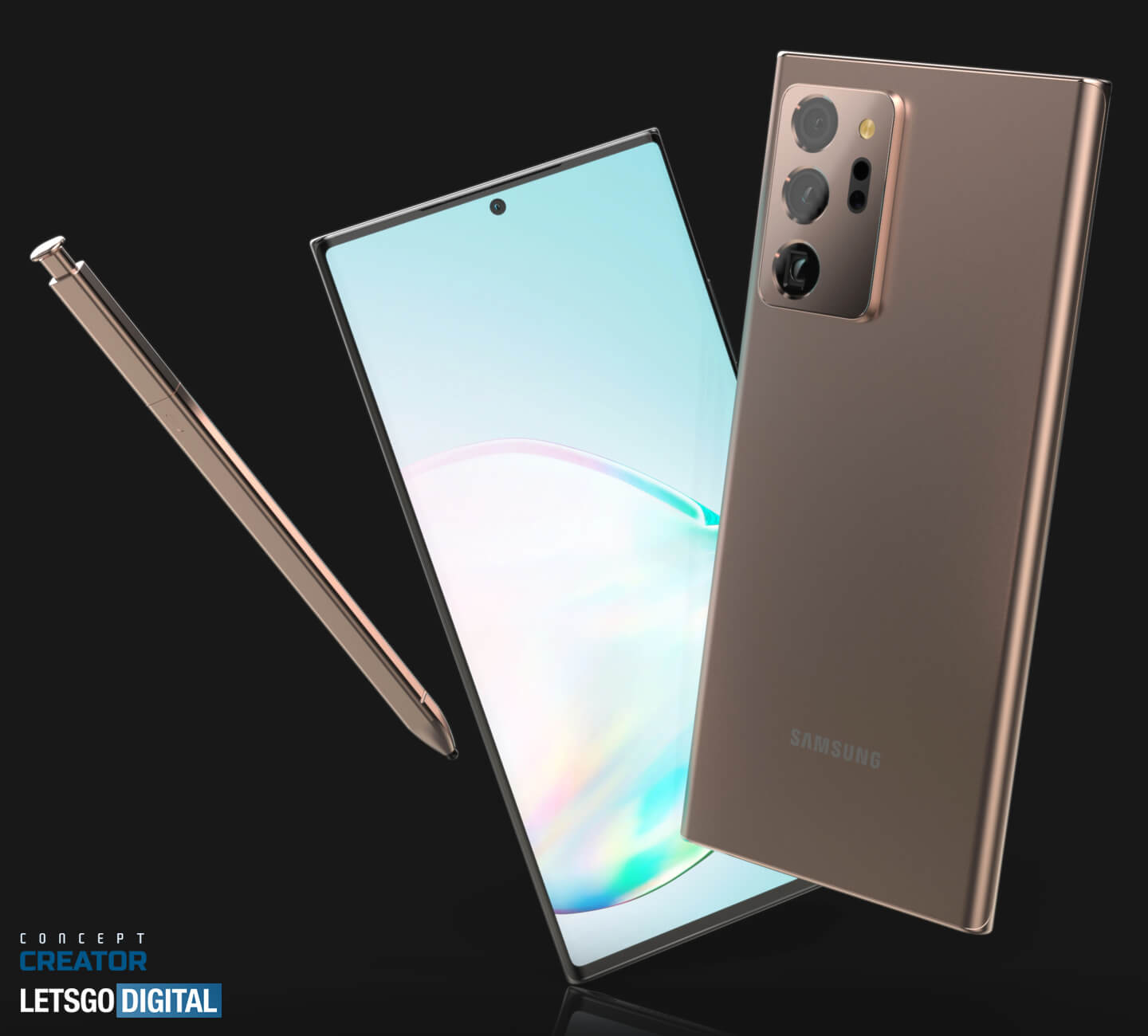 In the meantime, several other sources have revealed details about the front of the Samsung Note 20 (Ultra). As with the Note 10 and the S20 series, Samsung seems to opt for a punch-hole selfie camera that is centered at the top. The screen hole will be slightly smaller than before, the same also applies to the bezels. The device also seems to have a slightly less rounded design than its predecessor.

Based on the leaked images in combination with previous rumors, Jermaine Smit, aka Concept Creator, made in partnership with LetsGoDigital a new animation video of the Note 20 Ultra. In addition to the bronze color, Samsung’s flagship is also shown in black and gray. A gold and white version of the Ultra model may also be released. The standard Note 20 will probably also be available in a stylish green color scheme.

Since the Galaxy Note 5 was introduced in August 2015, the vast majority of Samsung’s flagship smartphones have been equipped with a curved AMOLED display. However, this year there seems to be a notable change. Because the standard model will have a flat screen, presumably it is a 6.4-inch Full HD+ display – so no QHD+ resolution as its bigger brother has.

Also, the 120 Hertz refresh rate, which was first applied to the S20 models, will not be supported by the Note 20. Samsung seems to opt for a 60 Hertz screen instead. Fortunately, the Ultra model will be equipped with a high-quality screen: a 6.9-inch QHD+ 120Hz display. Both models will incorporate a Dynamic Amoled screen with HDR10+ support.

Samsung will probably also provide the Note 20 series with a renewed ultrasonic fingerprint sensor from Qualcomm. The new sensor can cover a larger display area, in addition, it becomes possible to scan two fingers at the same time. This would be beneficial in terms of security. 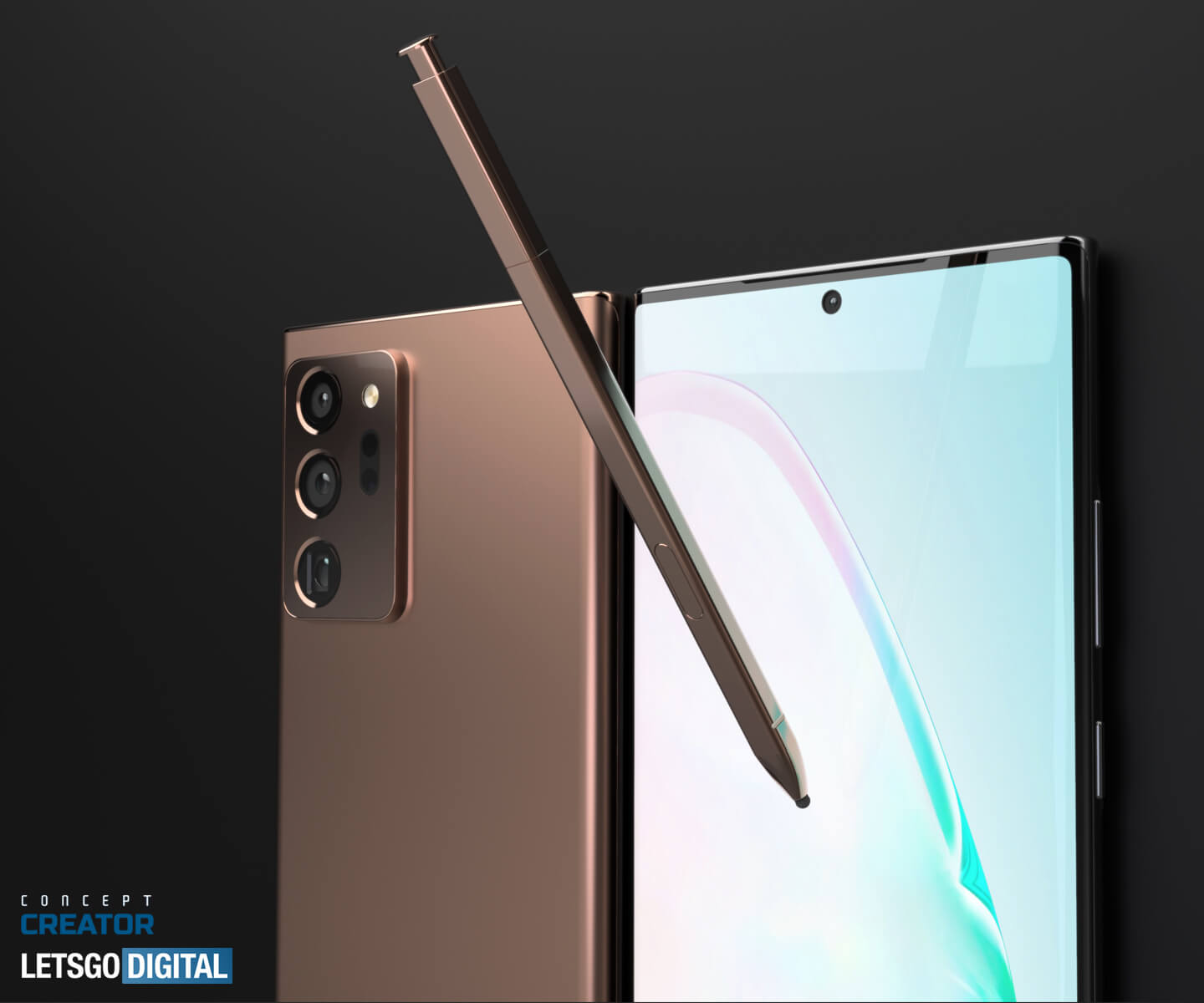 Improvements are also expected in terms of overall performance as Samsung seems to make use of a brand new chipset. Instead of the Exynos 990 found in the S20 models, the Note 20 series will be driven by the Exynos 992, which is a 5nm chip. However, it is still unknown whether this extremely fast SoC will only be used for the Korean handsets or also in other parts of the world. The Snapdragon 865, which is equivalent to the Exynos 990, will most likely be used in the US.

In addition to a faster processor, more memory is also expected. Last year, 8GB RAM / 256GB storage was the basic version for the Note 10. The Plus model got equipped with 12GB RAM / 256GB ROM. In addition, the 5G models were presented with extra memory.

Several sources have reported that Samsung will integrate no less than 16GB of RAM in its future flagship models. However, it is still unknown whether this will apply to both models. In addition, the question remains to what extent this will be the basic version – after all, more memory also means a higher cost. Personally I do not expect the standard Note 20 to come equipped with 16GB of working memory, 12GB should be more than enough. 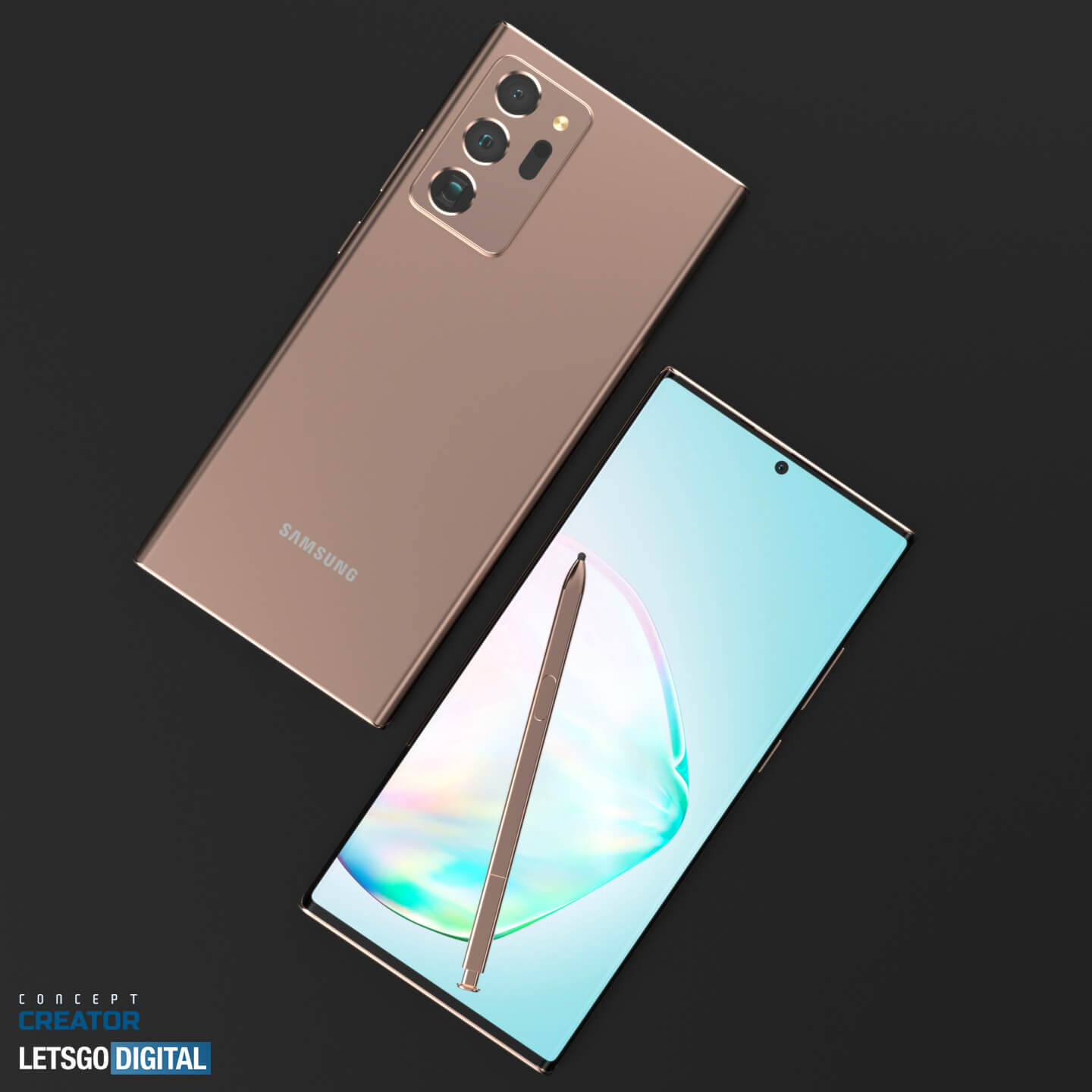 The Samsung Note 20 Ultra will feature the most advanced camera system. From the leaked images, it can be concluded that three camera lenses will be placed vertically of which the bottom camera is a periscopic zoom camera. The camera system protrudes quite far out of the housing, although this looks less aesthetically pleasing, it does indicate that Samsung wants to use large camera sensors – just like with the S20 Ultra. A larger sensor is able to absorb more light, allowing you to take more beautiful, detailed evening and night shots.

The main camera of the Ultra model will incorporate a 108 megapixel image sensor. In addition, a 12-megapixel ultra-wide-angle lens and a 13-megapixel zoom camera will probably be integrated. The 100x Space Zoom is omitted this time, instead the device seems to support 50x digital zoom. The 10x Hybrid Zoom is likely to be maintained and deliver a better image quality than before, especially in poor lighting conditions. The 8K video function that was first implemented in the S20 serie can also be found in the new Note smartphones.

To the right of the three cameras we see an LED flash and an autofocus laser. The 3D ToF camera will therefore be canceled. Samsung is said to have greatly improved the AF system in both speed and accuracy. This was also necessary, after all the focus system of the S20 Ultra left something to be desired, although Samsung has made several changes to the AF-system through software updates.

As for the battery capacity, the Galaxy Note 20 Ultra is likely to be equipped with a 4,500 mAh battery that supports 45 Watt fast charging. Whether this charger is also included as standard remains to be seen. The S20 Ultra comes with a 25 Watt charger, while this smartphone also supports 45 Watt fast charging. Clearly a missed opportunity as the competition is able to provide a faster charger as standard, like the Oppo Find X2 Pro with its 65 Watt charger. 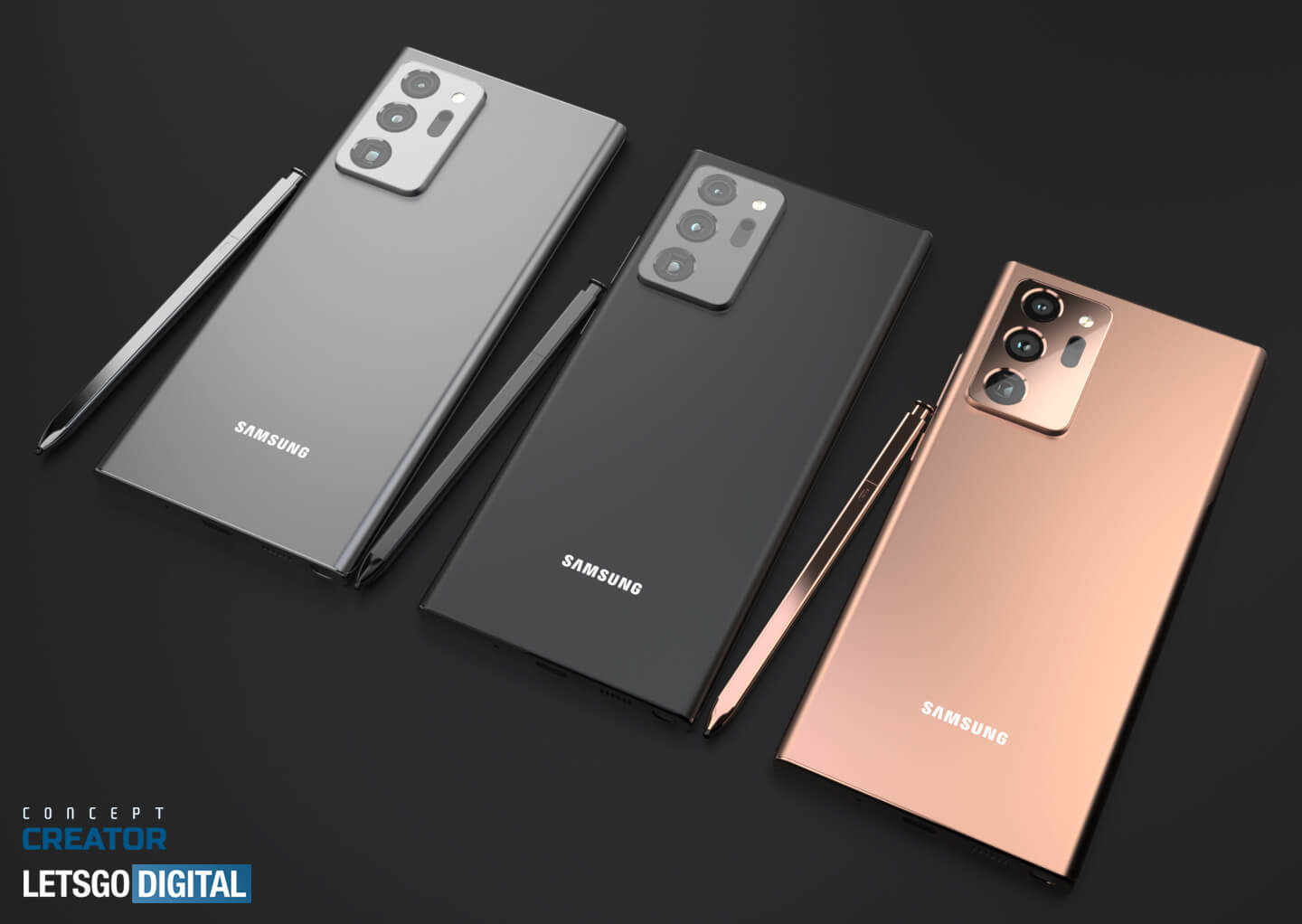 What will the new handsets cost? It has been a widely discussed subject on the Internet. Not surprising too, since Samsung announced a significant price increase for its Galaxy S series at the beginning of this year – partly due to the addition of 5G support and the completely redesigned camera system. Now the question remains what will the new Note models cost, traditionally these are the most expensive Samsung smartphones.

To begin with the Ultra model, last week LetsGoDigital already reported to expect an additional cost of about € 150 compared to last year’s top model; the Note 10 Plus. This would bring the starting price of the Samsung Galaxy Note 20 Ultra to about € 1,250. A huge amount of money, of course, but still € 100 cheaper than the entry price of the S20 Ultra.

As for the standard model, the Note 10 received a suggested retail price of € 950 (8GB RAM / 256GB ROM) last year. This year, however, Samsung seems to provide the Note 20 with less updates. Consider for example the flat Full HD + 60Hz display. It is therefore very plausible that the price of this device will be less increased. Our expectation is that the Galaxy Note 20 will be put on the market for a starting price of € 1,000.

Possible dollar prices were leaked earlier this week. The Ultra model would carry a suggested retail price of $ 1,300 USD. The standard Samsung Note 20 would get a starting price of $ 1,000 USD. Whether these are the actual prices and to what extent these amounts can be directly converted to Euros remains to be seen. It is however certain that you will have to dig deep into the pouch for the top models of Samsung.

The new smartphones with S Pen will be officially announced on Wednesday, August 5, 2020 during a virtual press meeting that can be followed by a live stream. Yesterday Samsung sent out the press invitations for the Galaxy Unpacked 2020 event, the above teaser was also put online. However, the 15-second video reveals little more than the new bronze color – which has already been confirmed by Samsung Russia.

During the Galaxy Unpacked 2020 event, Samsung will probably also announce the Galaxy Watch 3 smartwatch. A new foldable smartphone, the successor to the Galaxy Fold, may also be announced at the same time. Although there are also signs that this folding phone will not arrive until September. There is still some uncertainty about the name of this device. Online it is often referred to as “Galaxy Fold 2“. However, it is certainly not inconceivable that Samsung chooses to accommodate this folding phone within the new Galaxy Z series, which also includes the Galaxy Z Flip. In that case, Galaxy Z Fold would be a very logical name.

An additional variant of the Samsung Galaxy Z Flip is also expected, namely a 5G model. In terms of specs, this device will be the same as the already available Z Flip, although perhaps additional memory will be built in. The Galaxy Z Flip 5G will most likely be introduced simultaneously with the Note 20. Presumably, both the Note 20 and Note 20 Ultra will go on sale in late August. Often Samsung opts for a release on Friday, which makes Friday August 21 a very plausible date.