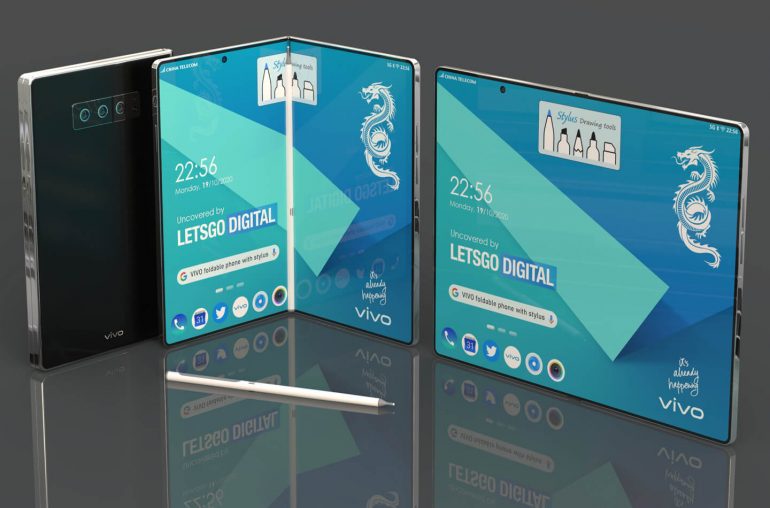 Vivo develops a phone with an inwardly folding display that can fold out to a tablet size. This foldable smartphone also comes with a stylus pen.

The Chinese smartphone brand Vivo is on the rise to Europe. In home country China, Vivo is already the Number 2, since last month the manufacturer is also active in 6 European countries. The sister company of Oppo and OnePlus already has an interesting product portfolio with various striking and innovative phone models. For example, consider the Vivo NEX line-up. In addition, the company also showed a special Apex 2020 concept smartphone earlier this year and was recently awarded a Red Dot Design Award for the Vivo IFEA phone with detachable pop-up camera.

For the time being, the company has not released any foldable smartphones yet. However, this seems to be changing in the coming year. Display analyst Ross Young published a Tweet last week stating that no fewer than 4 foldable smartphone models will be introduced by Oppo, Vivo and Xiaomi in the second half of 2021. Although details about these folding devices are scarce, the following patent may give us more insight into Vivo’s plans for foldables. 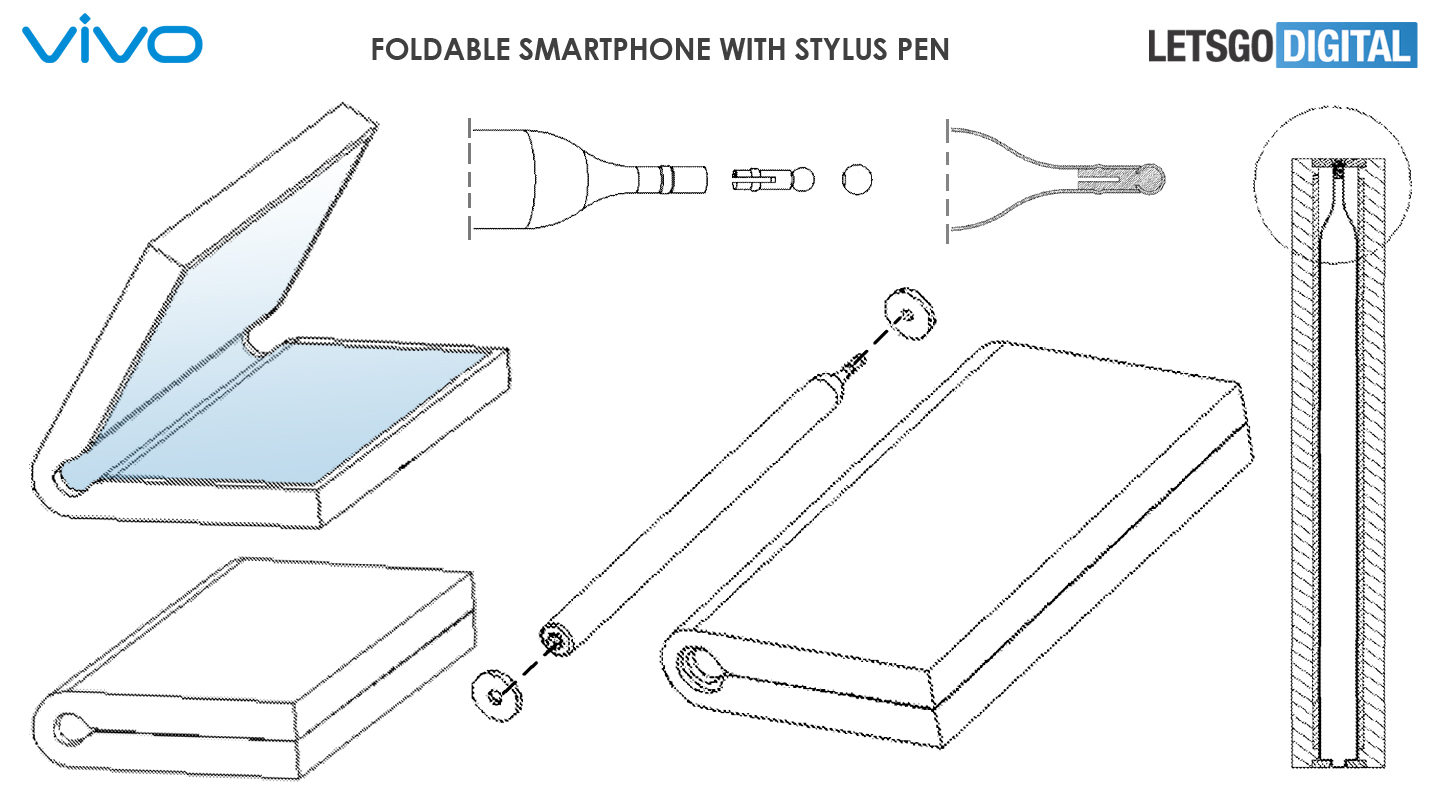 Vivo foldable phone folds out to a tablet

The images show a foldable smartphone with a somewhat similar design to the Samsung Galaxy Z Fold 2. Unfolded, you have a wide tablet-sized screen at your disposal. The flexible display is located on the inside, so that the screen remains well protected against external influences.

Vivo seems to intend to provide its foldable phone with a stylus pen too, which you can be stored in the device. When you fold the smartphone, you can store the pen where the screen is folded. This minimizes the chance that you will lose the stylus.

By placing the pen on the inside of the bending mechanism, extra pressure can also be exerted on it, without this having consequences for the flexible display, as stated in the patent description. The pen tip is made of soft rubber material, which prevents it from scratching the flexible display. 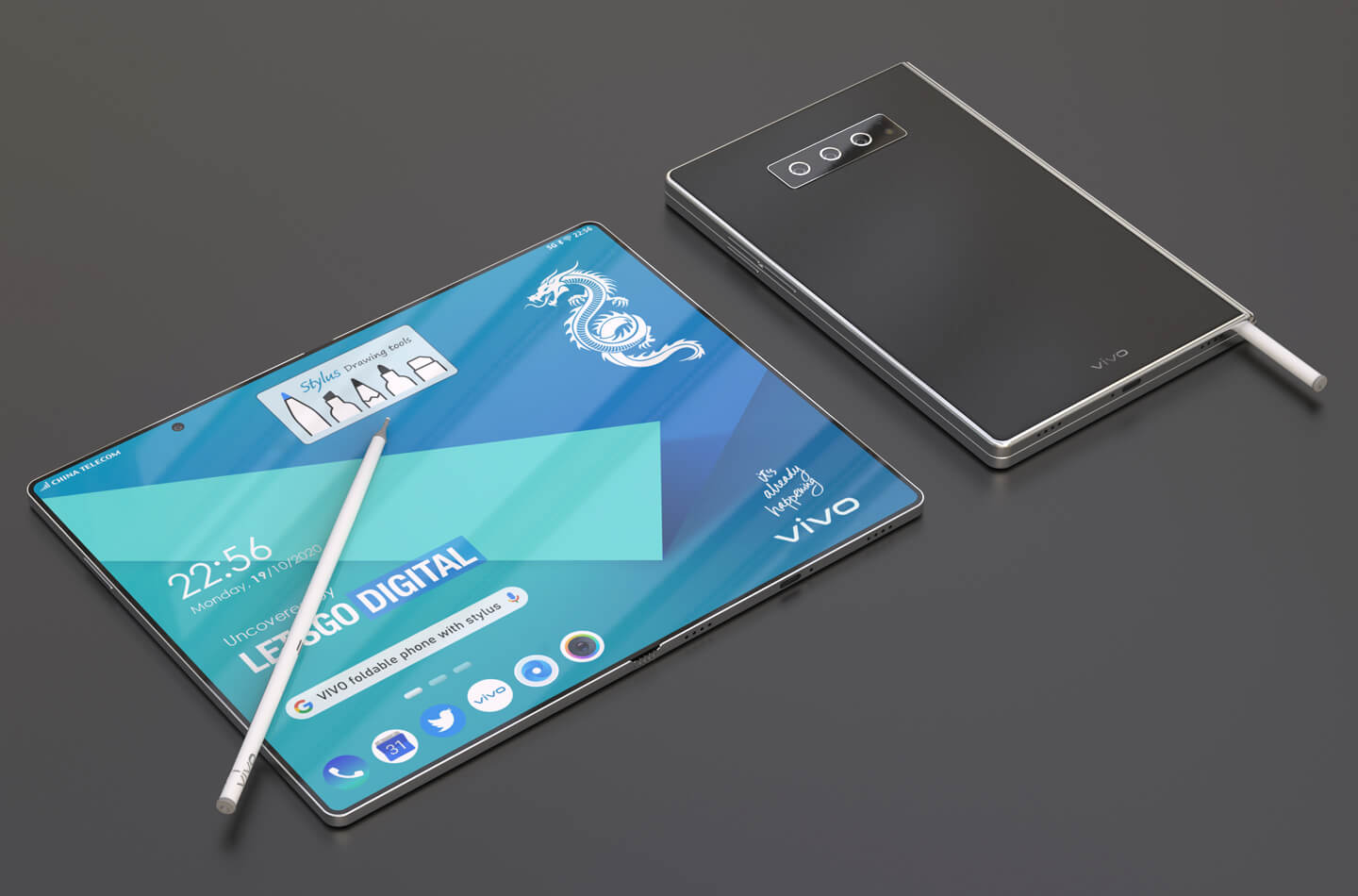 The stylus pen has a cylindrical design and almost the same length as the device itself – which means that the stylus is significantly longer than the S Pen that Samsung uses with the Note 20 (Ultra) and the Galaxy S21 Ultra, which is expected next month. The latter model will not have a stylus compartment. Instead, Samsung will design a case in which the pen can be stored.

By using magnetic material, the Vivo stylus stays in place when you store it. At the bottom, a cleverly designed cover ensures that the pen cannot fall out of the housing when you carry the smartphone folded with you.

When the stylus pen gets damaged, it is also possible to replace only the damaged part, which will save costs for the user, according to the documentation. This patent mainly concerns the stylus pen and the associated stylus compartment. This means that other design aspects of this foldable smartphone, such as the front display and camera system, remain underexposed. 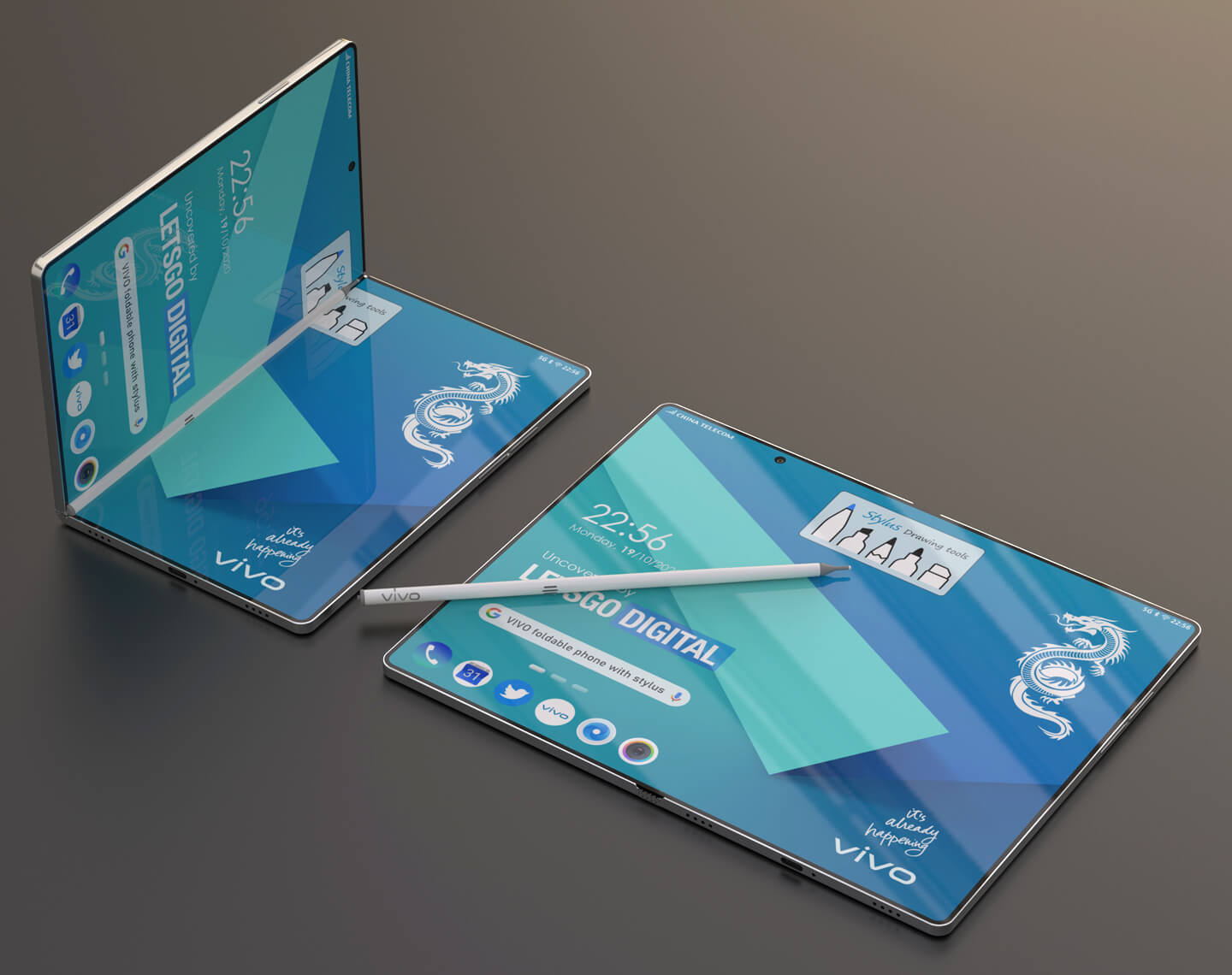 In order to better visualize the patented images, LetsGoDigital has made a series of high-resolution renders. Since it is still completely unclear what the front of this device will look like, this part has not been visualized by us.

Unfortunately, it is not clear from the documentation how the pen is powered. A built-in battery may be used or as Samsung applies for the S Pen; a super capacitor – which can be charged in 40 seconds to last about half an hour. It also remains unknown whether the Vivo stylus will support Bluetooth.

Earlier this year, sister company Oppo also patented a smartphone with stylus pen. This pen was equipped with a battery, Bluetooth support and a microphone – in order to also make calls via the stylus. Whether Vivo has similar plans remains unknown for the time being.

In any case, it is in line with expectations that several types of foldable smartphones will be released next year. One of the most important features of this type of device is the relatively large screen surface. It is precisely because of this larger display that a stylus pen can deliver an important added value. 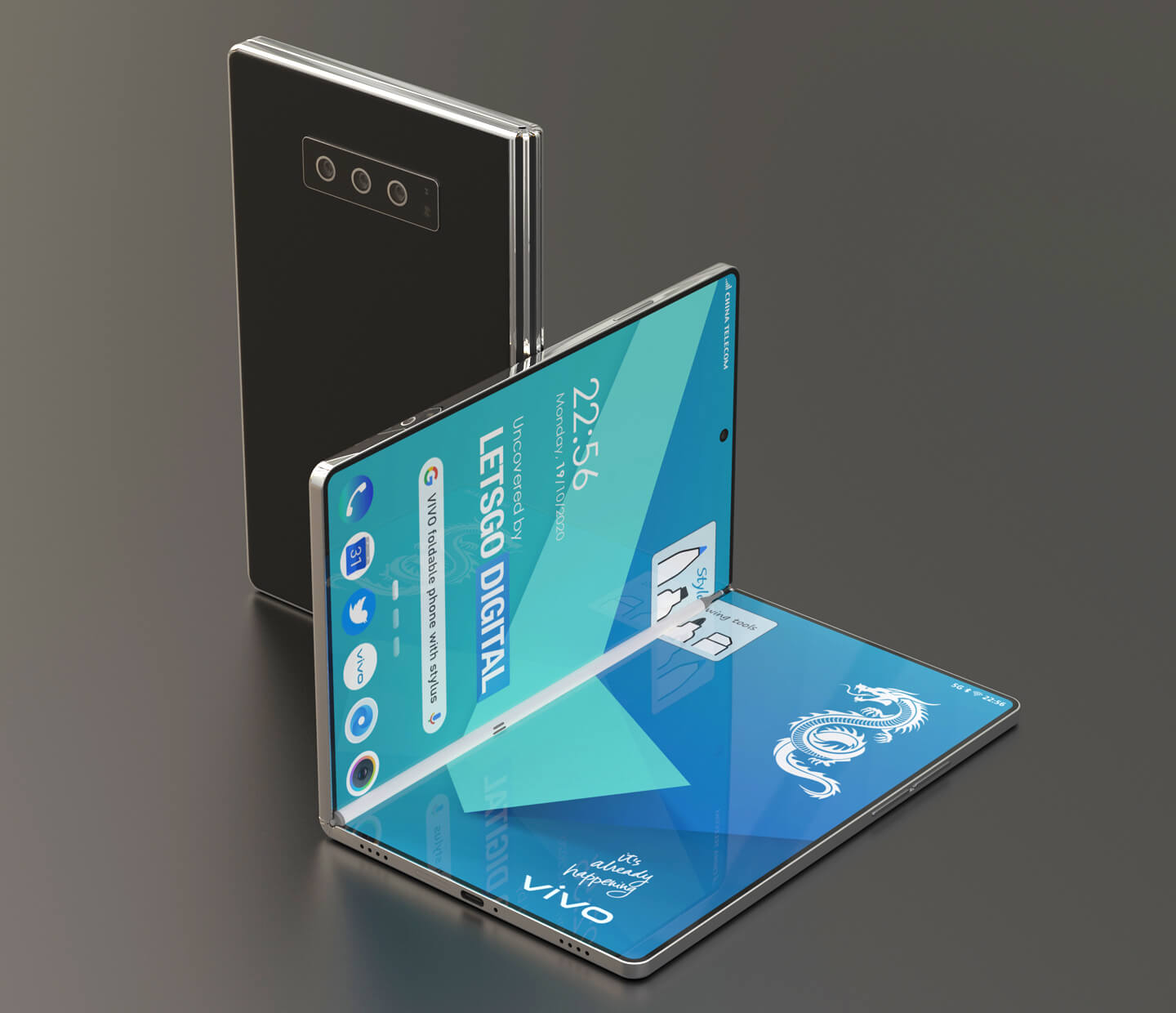 There are already several smartphones and tablets available with a stylus pen, think of brands such as Samsung, Apple, LG, Huawei and Motorola. It is already known that Samsung also wants to make the Galaxy Z Fold 3 compatible with the S Pen. It wouldn’t be surprising to see other brands do the same.

Last year, renders of a Vivo IQOO foldable smartphone already appeared online. This was a folding phone with an outwardly foldable display – somewhat similar to the Huawei Mate X / Mate Xs and the foldable smartphone that Oppo showed at the beginning of last year – the main difference being that Vivo opted for a full screen design, without a vertical camera system.

At the time, Oppo reported that the company sees too little added value in their prototype to actually put this device to market. Since then, the company has patented several designs of foldable phones with an inward folding screen. It is therefore certainly not inconceivable that both Oppo and Vivo will present an inwardly folding smartphone in the second half of 2021, which will expand into a tablet format.

The Samsung Galaxy Z Fold 3 is also expected by then. If Vivo also manages to release a folding phone with a stylus pen, then this model could become an important competitor to the Z Fold 3.

View the documentation of the Vivo foldable smartphone with stylus pen here. 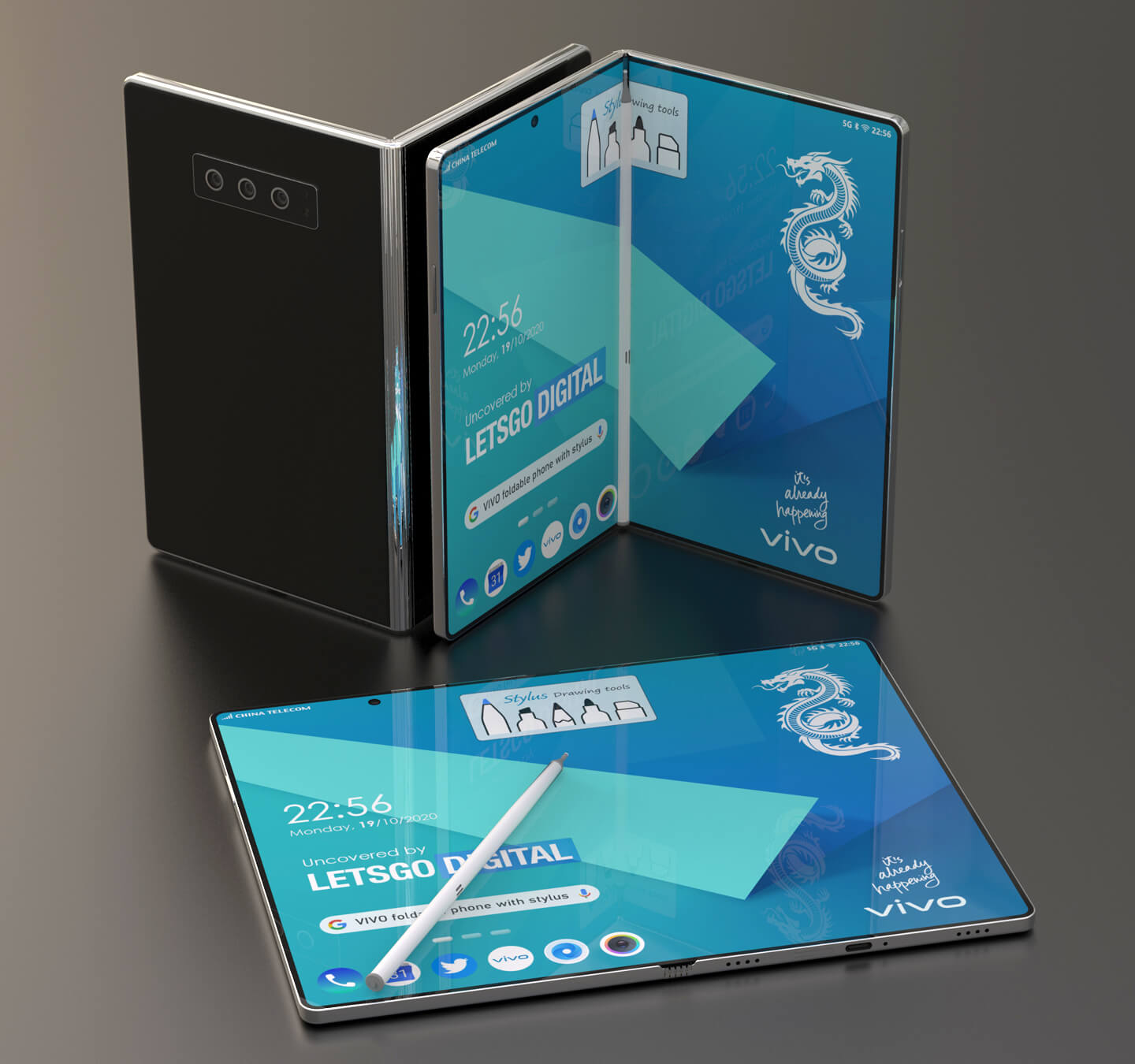 Note to publishers : The product pictures shown in this article are designed and copyright protected by LetsGoDigital. The images are based on the patent filling from Vivo Mobile Communication and are meant for illustrative purposes only. Feel free to use the high-resolution renders on your own website, please be so respectful to include a source/credit link into your publication.