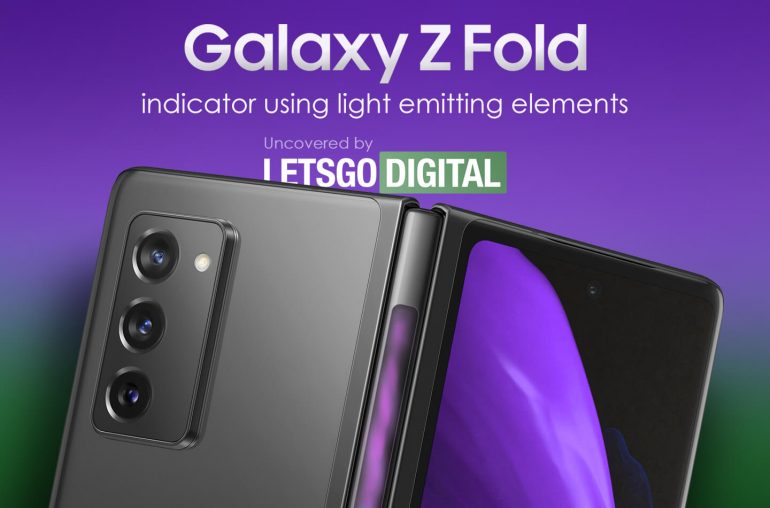 Samsung seems to be planning to equip the next Galaxy Z Fold smartphone with a useful light indicator, which will be placed on the hideaway hinge.

In August, Samsung introduced a range of new high-end smartphones, including the Galaxy Note 20 (Ultra) and the Galaxy Z Flip 5G. At the same time, the successor to the Galaxy Fold was also announced; the Galaxy Z Fold 2. Samsung has made numerous improvements, not only is the Z Fold2 more powerful and faster than its predecessor, the hideaway hinge has also been improved. The cover screen is also significantly enlarged and a better camera setup is integrated.

What can we expect from Samsung in the future? A possible new feature for the Galaxy Z Fold 3 will be a light indicator, which will be incorporated onto the hideaway hinge – according to a new patent. 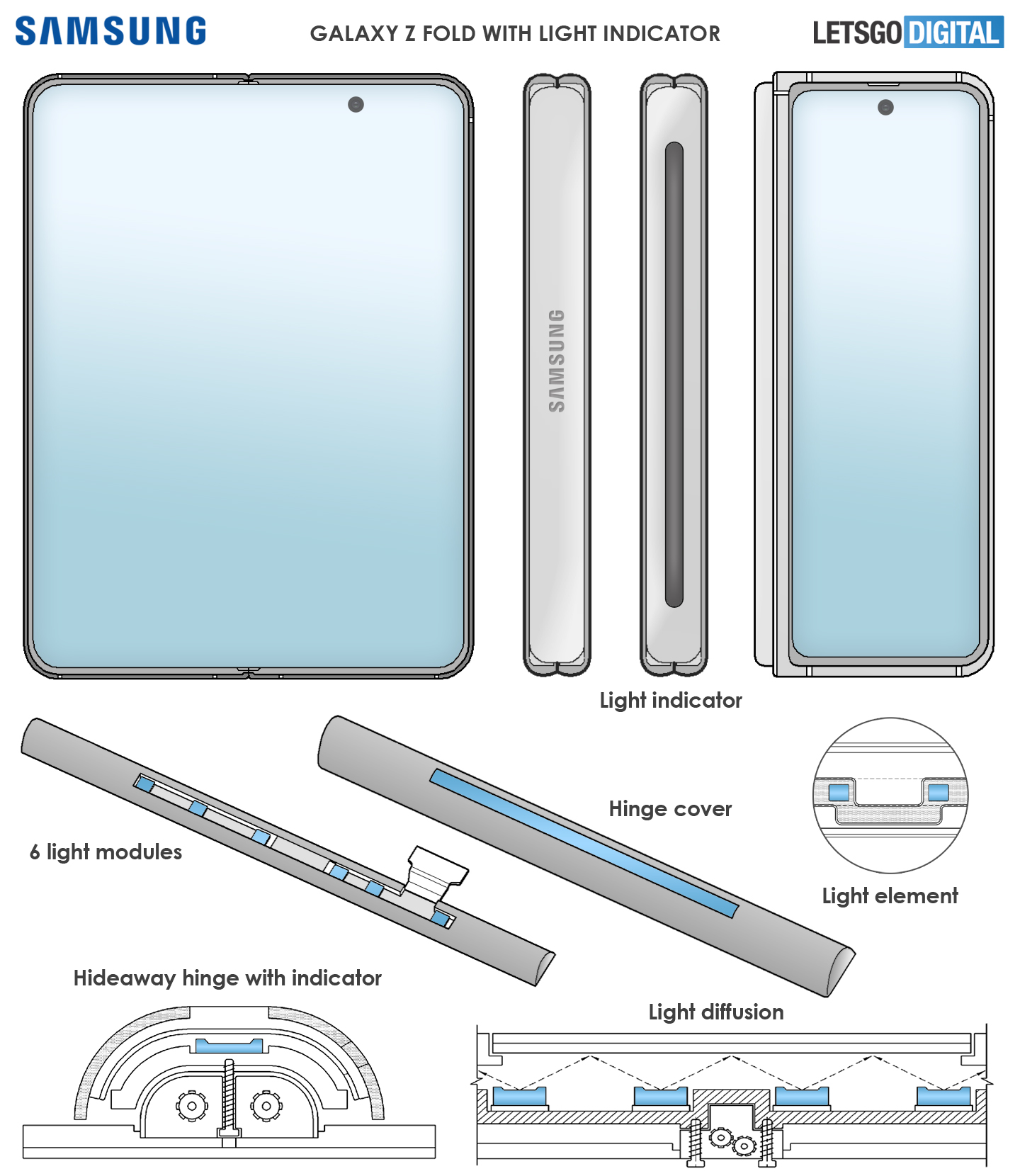 In March 2019, Samsung Electronics filed a utility patent application for an “Electronic device including indicator”. The 44-page documentation was published by the WIPO (World Intellectual Property Organization) on October 1, 2020.

Samsung has used the Galaxy Fold as the basis for the patent images. It is common for manufacturers to use existing models for this purpose, for clarification in order to better explain the differences between the existing and the newly patented technology.

An indicator is mounted on the hideaway hinge which contains multiple light-emitting elements. It is a strip with LED lighting, which is finished with a partially translucent cover. This way, the light modules remain protected against external influences and the light can shine through the hinge cover. It concerns red, blue, green and white light. By combining these with visual and decorative effects, several light colors can be combined – according to the patent description.

The light indicator is used to notify the user of new notifications or incoming calls and messages. When the sound of the smartphone is deactivated and/or vibration is turned off, it is difficult to signal such happenings. But with the help of the LED indicator the user will still receive a signal.

In addition, there are situations in which you cannot view the cover screen. For example, if you have the folded smartphone upside down on the table or stored in your bag. In such cases, the indicator can still provide information in order to inform the user directly when new information comes in. 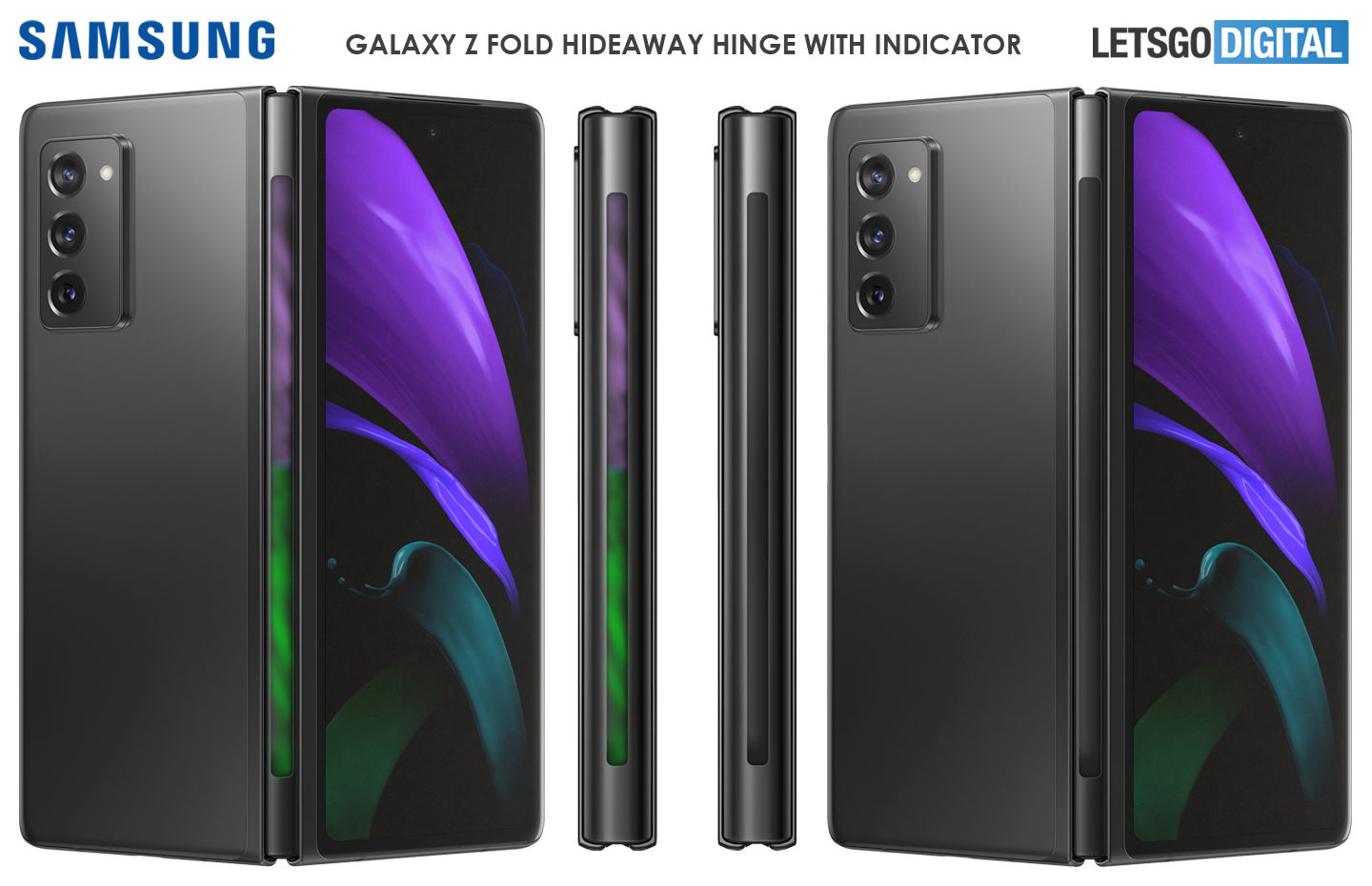 Whether Samsung will actually integrate this indicator in the upcoming Galaxy Z Fold 3 remains unknown. It is clear that Samsung is continuing to explore new possibilities to further improve the foldable smartphone and thus take the user experience to an even higher level.

Samsung also seems to be investigating the possibility of making upcoming folding phones compatible with the S Pen. With this stylus pen, the Galaxy Note series has been able to distinguish itself from other smartphone models for years. Especially with a large display device such as the Z Fold 2 the S Pen can deliver an important added value. In October last year, LetsGoDigital already reported on a Samsung Galaxy Z Fold with S Pen.

The Korean manufacturer has managed to create a considerable lead over other smartphone manufacturers when it comes to mobile phones with a flexible display. Samsung is the only producer that has now released 3 foldable phones, with 2 completely different designs. And if we are to believe the rumors, there are still several foldable models in the pipeline.

Samsung will probably host a new Galaxy Unpacked event in February 2021. During the event, the Galaxy S21 series is expected. At the same time Samsung will most likely also release a new folding phone – in the form of a Galaxy Z Flip 2. The Samsung Galaxy Z Fold 3 is only expected in the second half of 2021, simultaneously with the Note 21 series. In addition, the company also seems to be experimenting with new types of designs, for example, a retractable Samsung Galaxy smartphone was spotted at the beginning of this year.

All in all, we can expect a lot from the Korean manufacturer in the (near) future. Samsung has been the market leader in the field of smartphones for years and is clearly determined to safeguard this position for the future.

Here you can take a look at the official documentation of the Samsung Galaxy Z Fold 3 with indicator.