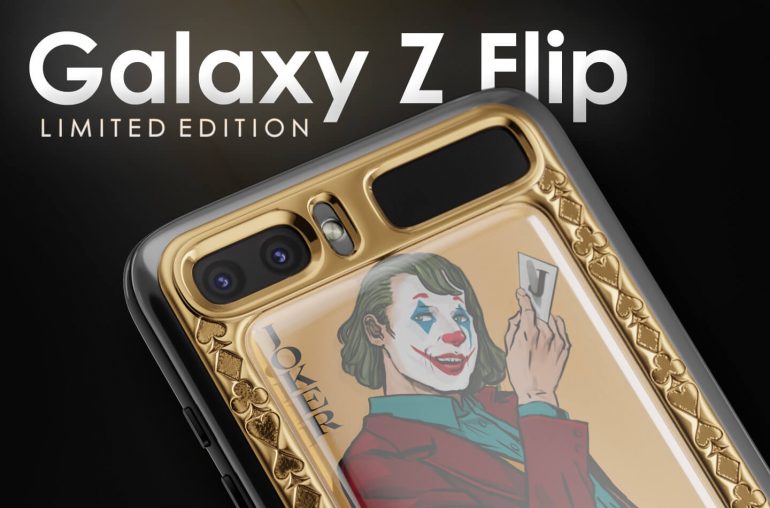 We’re less than a week away from the official Galaxy Unpacked 2020 event in San Francisco and almost all the information surrounding the launch has already leaked. We’ll get the new Galaxy S20 lineup and a brand-new foldable phone – the Galaxy Z Flip. The latter will be a different form factor device than the first-gen Galaxy Fold and it will fold horizontally much like the Motorola RAZR. Although we’re counting the days to the unveiling, Russian phone tune-up company Caviar already announced three Limited Edition versions of the Galaxy Z Flip.

Men will enjoy a stylish Carbon Titanium model and women will get a luxurious Golden one. The third model is an interesting nod to the Holywood industry and DC comics franchise – it’s a Galaxy Z Flip Joker & Harley Quinn Edition, dedicated to the much-anticipated new Joker movie called “Birds of Prey” (and the Fantabulous Emancipation of One Harley Quinn). 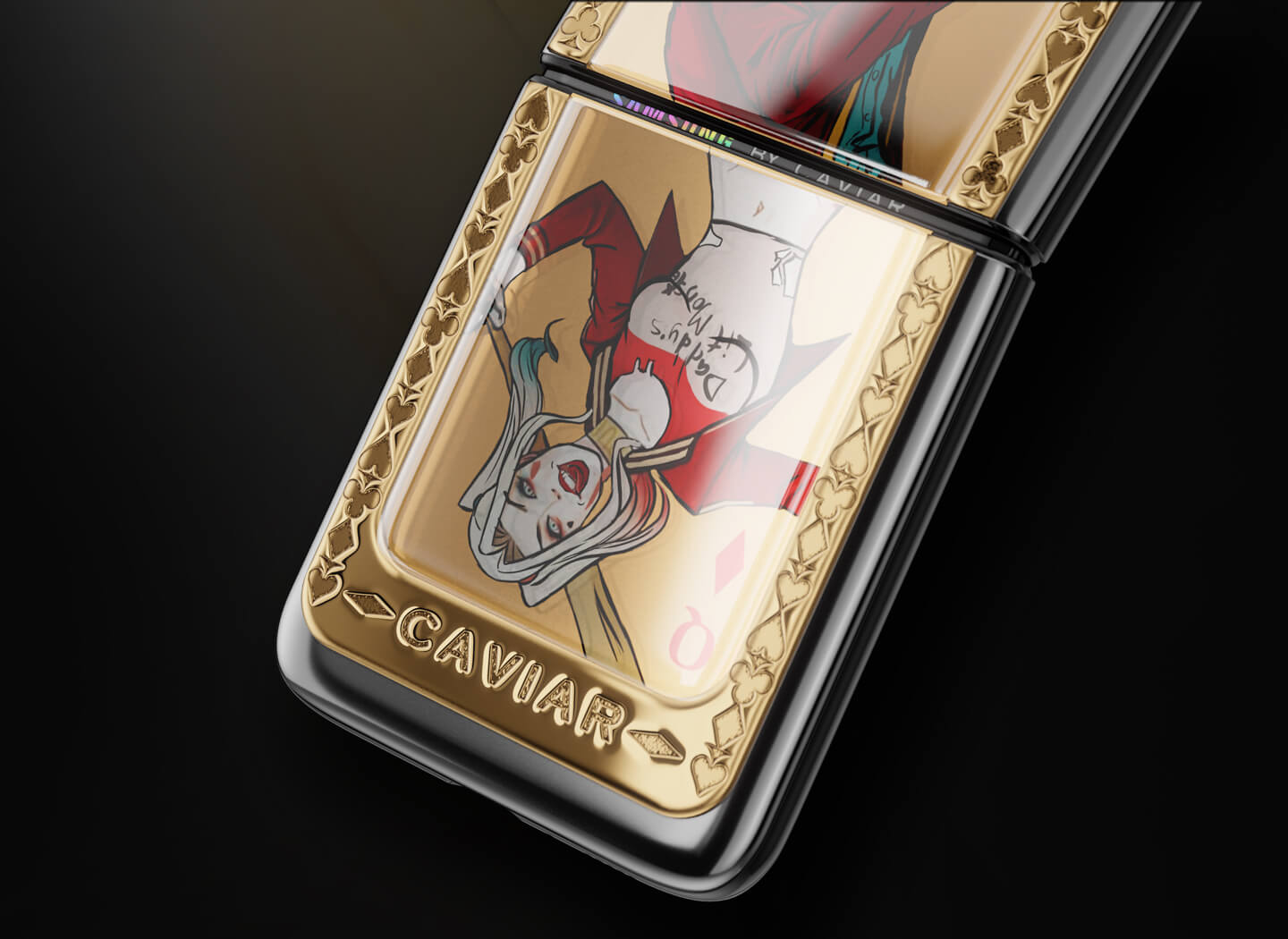 The movie got really positive reception among critics and the Academy with 11 Oscar nominations, including one for “Best movie”. This weekend the 92nd Oscars ceremony will take place, and apart from all the glamour and a hall packed with celebrities we’ll get the winners. It seems Caviar choose wisely with its special treatment this time – with 11 nominations to back it up, Galaxy Z Flip Joker & Harley Quinn is already a hit. We might soon get the first smartphone to win an Oscar too!

The device itself is covered with 24-carat gold with the four playing cards suits engraved on the border – clubs, diamonds, hearts, and spades. Joker and Harley Quinn are sharing the two folding parts of the Z Fip in full color. The gold is varnished to give it additional shine and premium look.

Caviar will produce a total of 54 copies of this unique model. The number 54 refers to a set of playing cards, including the two jokers of course. The Z Flip Joker & Harley Quinn Edition gets an estimated starting price of $5,210 USD. This number is subject to change as the base price of the Galaxy Z Flip is not officially announced by Samsung yet. 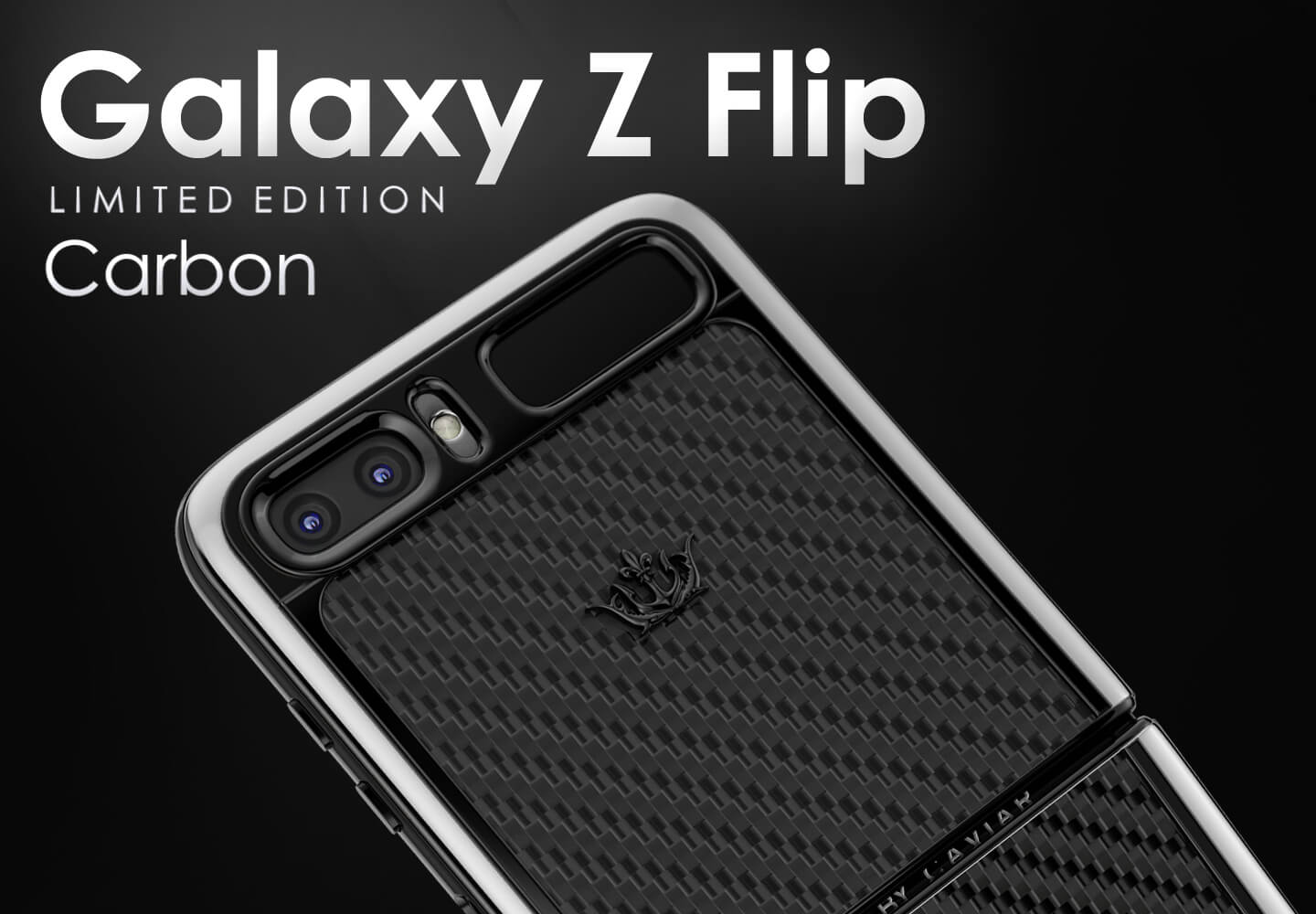 In addition to the Joker & Harley Quinn Edition, Caviar will offer two more conventional luxuries – a Carbon Titanium and a Gold Edition. The former has a titanium frame with a black carbon fiber covers on the back. This makes it really tough and scratch-resistant and the stylish futuristic look will appeal to the male audience out there. The starting price for this model is set at $ 5,690.

Ladies will get the necessary attention and glamour with a Golden Edition – covered in 999 gold with a unique 3D mesh-like pattern. The Caviar logo occupies the top piece while the name is written in gold on the bottom. If you want to couple that diamond ring with something extra and make your fiancee even happier, you’ll need $ 6,000 for this Galaxy Z Flip Gold Edition. 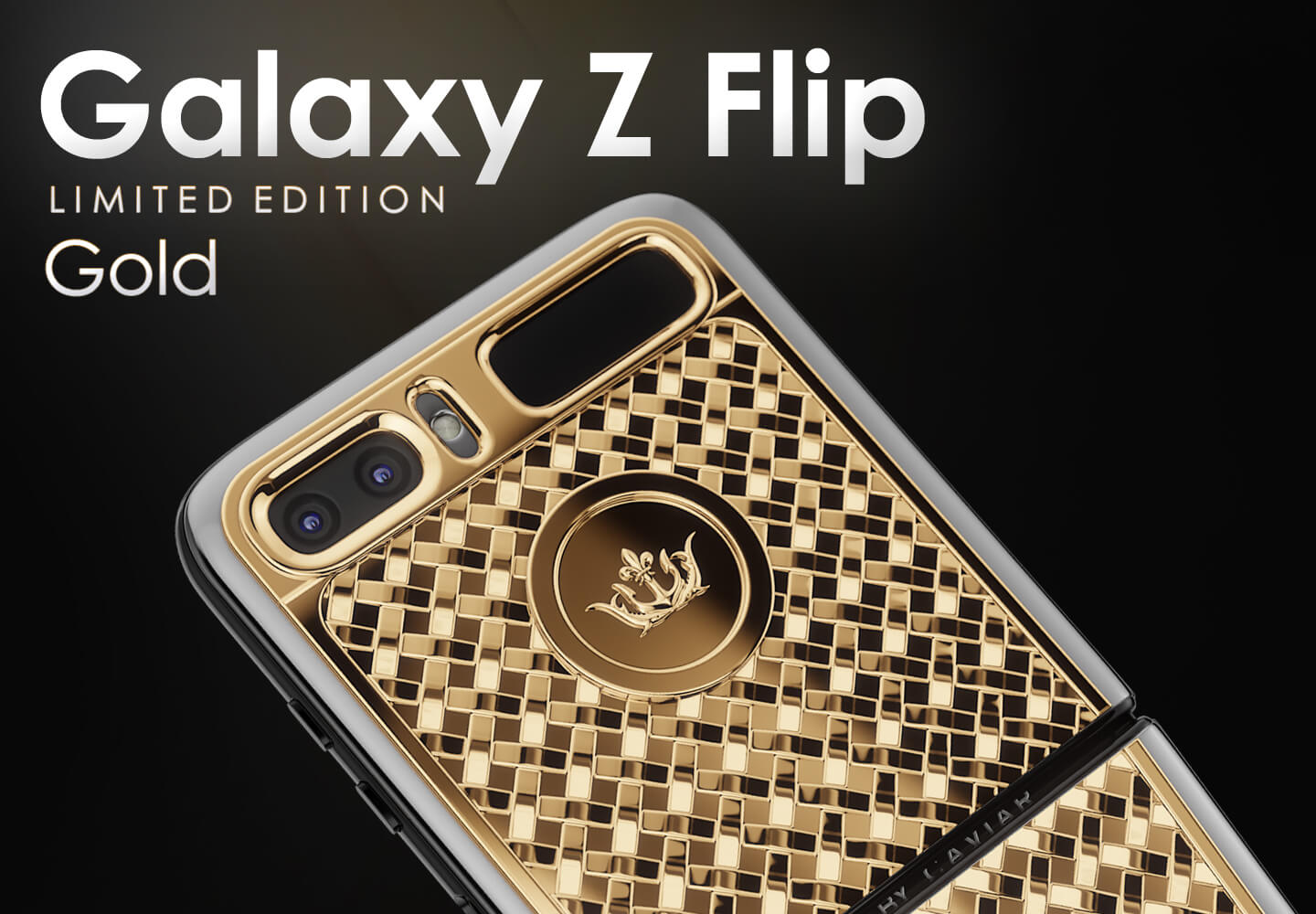 Samsung Galaxy Z Flip will be officially unveiled on Tuesday 11 February during the Galaxy Unpacked event. The rumor mill had it strong with this one, dishing out almost all the information about the device. Earlier this week we even got a glimpse at the real thing in a leaked hands-on video. Despite all of the RAZR references, the Z Flip will have significantly better specs than its Motorola rival and a much better and durable screen.

Samsung will be using Ultra-Thin Glass for the first time – with better contrast and more importantly improved scratch-resistance. An important step to deal with all the issues first-gen foldable phones encountered. The Galaxy Z Flip will exchange the notch for a punch-hole design, seen in the S10 line. It will feature a 10-megapixel selfie camera in the circular cutout.

Inside the Z Flip thicks the silicon heart of a powerful Qualcomm Snapdragon 855+ chipset with 8GB RAM and 256GB storage. On the rear, there’s a dual-camera system with two 12-megapixel sensors and wide and ultra-wide-angle lenses. There’ll be an additional small 1.06-inch display on the device, showing basic info like caller number, notifications, date and time and battery level when the phone is folded.

Samsung Galaxy Z Flip should be cheaper than its ‘predecessor’ – the Fold. Rumors set the starting price of the device at around $1,500 mark with no 5G version expected.