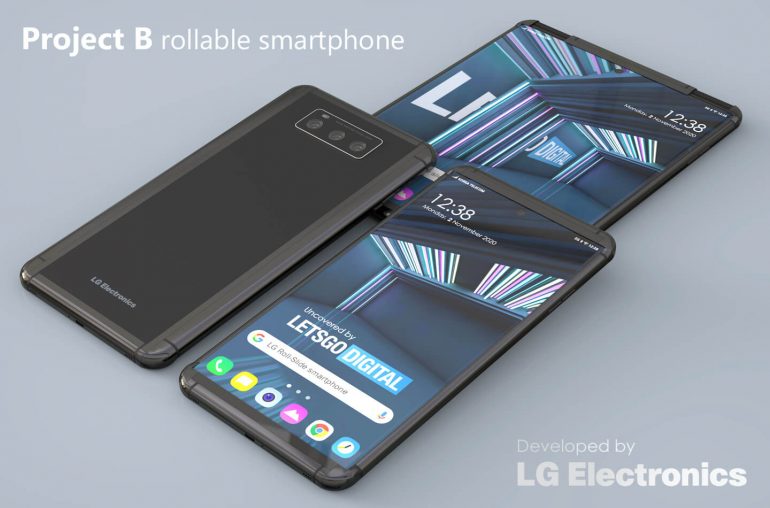 LG patents advanced technology for the development of an extendable, rollable smartphone. This LG phone can be pulled out into a tablet via both sides.

Last month, the LG Wing was introduced, as the first smartphone within the new Explorer Project. Within this phone series LG will introduce models with innovative, bold designs, creating new functions and user possibilities. Like the Wing, which has a Dual Screen swivel design. During the unveiling, LG also showed a short teaser video of a phone that’s currently in development, which will also be part of the Explorer Project. This smartphone seems to have a retractable display.

In November last year, LetsGoDigital already reported on an LG extendable phone, where the screen area could be doubled. Various other LG smartphones with a rollable display were featured as well. This time, the Korean manufacturer has been awarded a patent for a very versatile and modern designed smartphone with a retractable, rollable display. 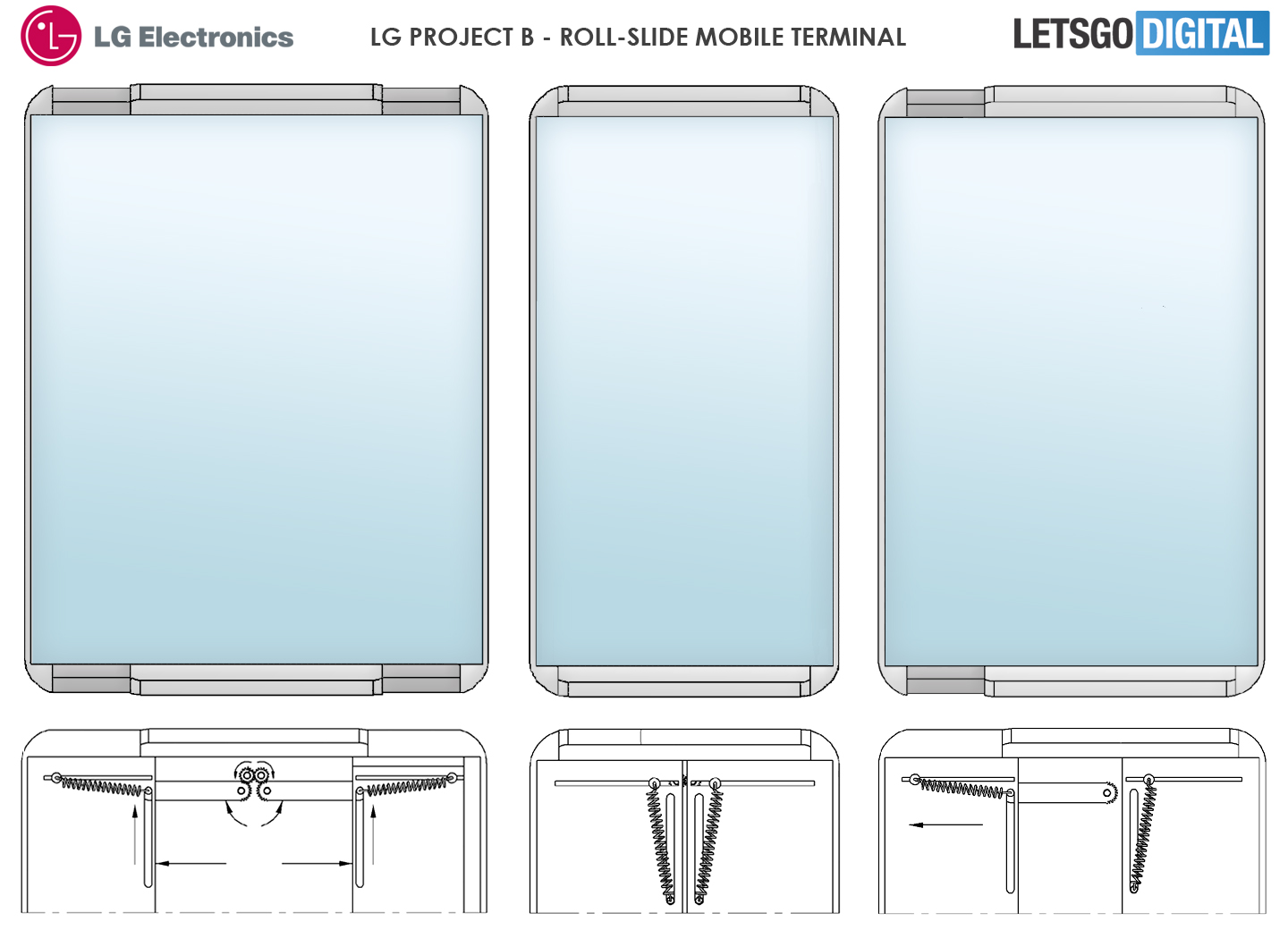 The patent called “Roll-slide mobile terminal” was filed by LG Electronics in August 2019 at the USPTO (United States Patent and Trademark Office). On September 24, 2020, the documentation was published and also included in the WIPO (World Intellectual Property Office) database for worldwide protection of the developed technology.

The patented LG smartphone has a flexible display that can be partly rolled up in the housing. In its most compact form you have the size of a regular smartphone at your disposal. Thanks to the roll-slide mechanism it is possible to pull out the phone, both to the left and to the right.

Once pulled out, the screen area is enlarged by 100%. When pulled out, the left and right frame will move with it, so that the rollable display remains well protected by the housing and the user can use the frame as a grip. The user can also decide to roll out only one way if desired. 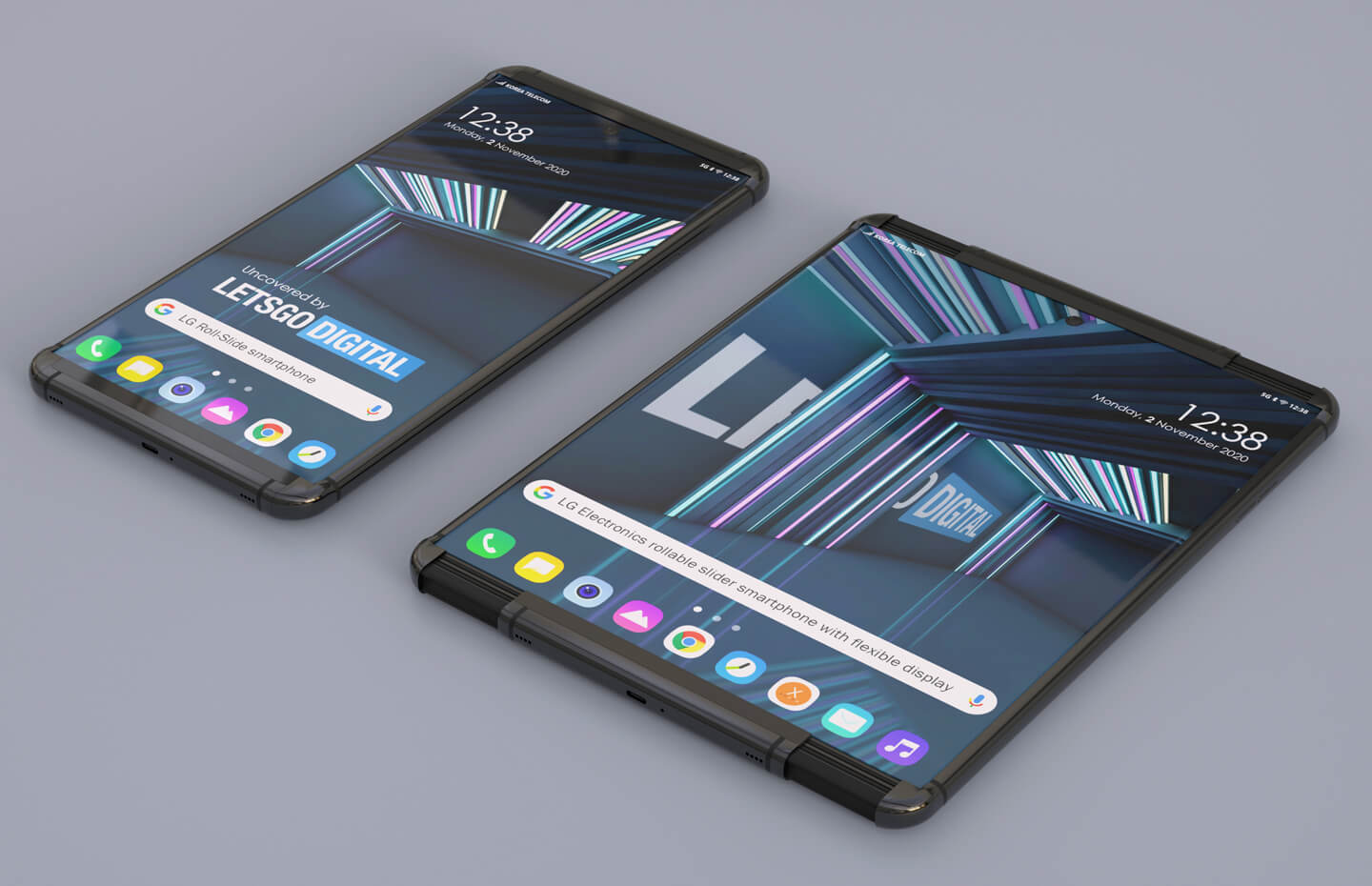 The retractable smartphone from LG has an OLED display and a metal housing. Where the screen is pulled out, the metal frame at the top and bottom will not be able to extend in the same way. LG has come up with some ingenious solutions for this.

When the display is pulled out, a second frame rolls out, which supports the top and bottom of the rollable display. This second frame is flexible in nature and can slide back into the metal main frame when you want to use the smartphone in its most compact form.

As the display rolls out from the sides, it takes up relatively little space in the housing. This leaves enough room available to process all necessary components. This is also a notable difference from the patent that was laid down by LG last year – when the screen surface was enlarged from the center, so that larger changes have to be made internally. 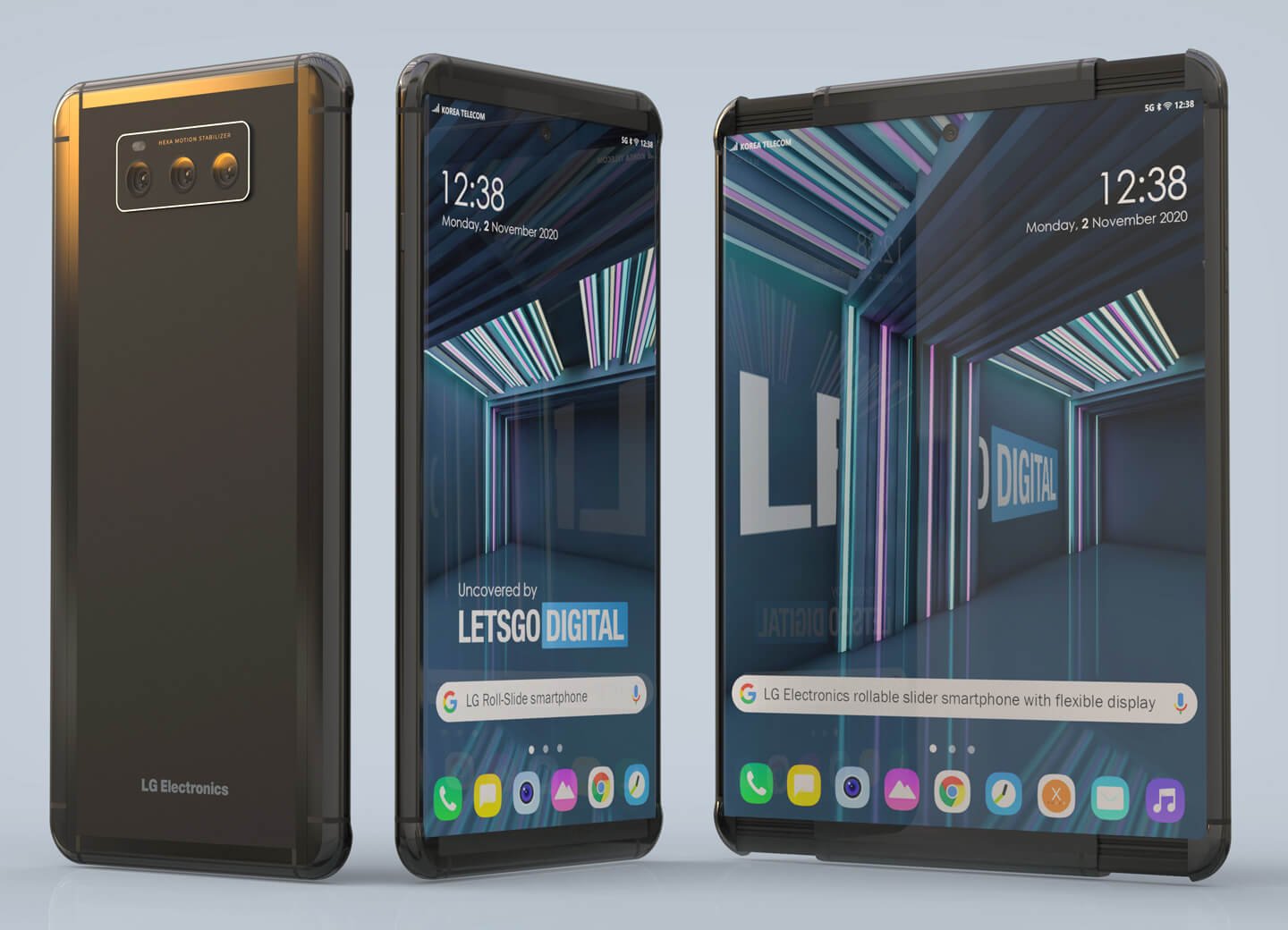 For the roll construction, saw gears are used, with the help of an elastic element the rollable display can roll in and out correctly. LG will also install a kind of “slide lock” to prevent the screen from unintentionally rolling out or rolling back in again. This slide slot will also prevent the flexible display from rolling in and out too quickly, which could cause creases in the screen.

The use of a retractable screen is extra durable, compared to all folding models that are currently available. As these devices always bend at one specific point, the screen is most vulnerable at the folding line.

With a bendable display that rolls out, this fold does not have to be made, so there is no longer one specific position that keeps folding up and down. This benefits sustainability, as LG Electronics describes in the in-depth documentation. 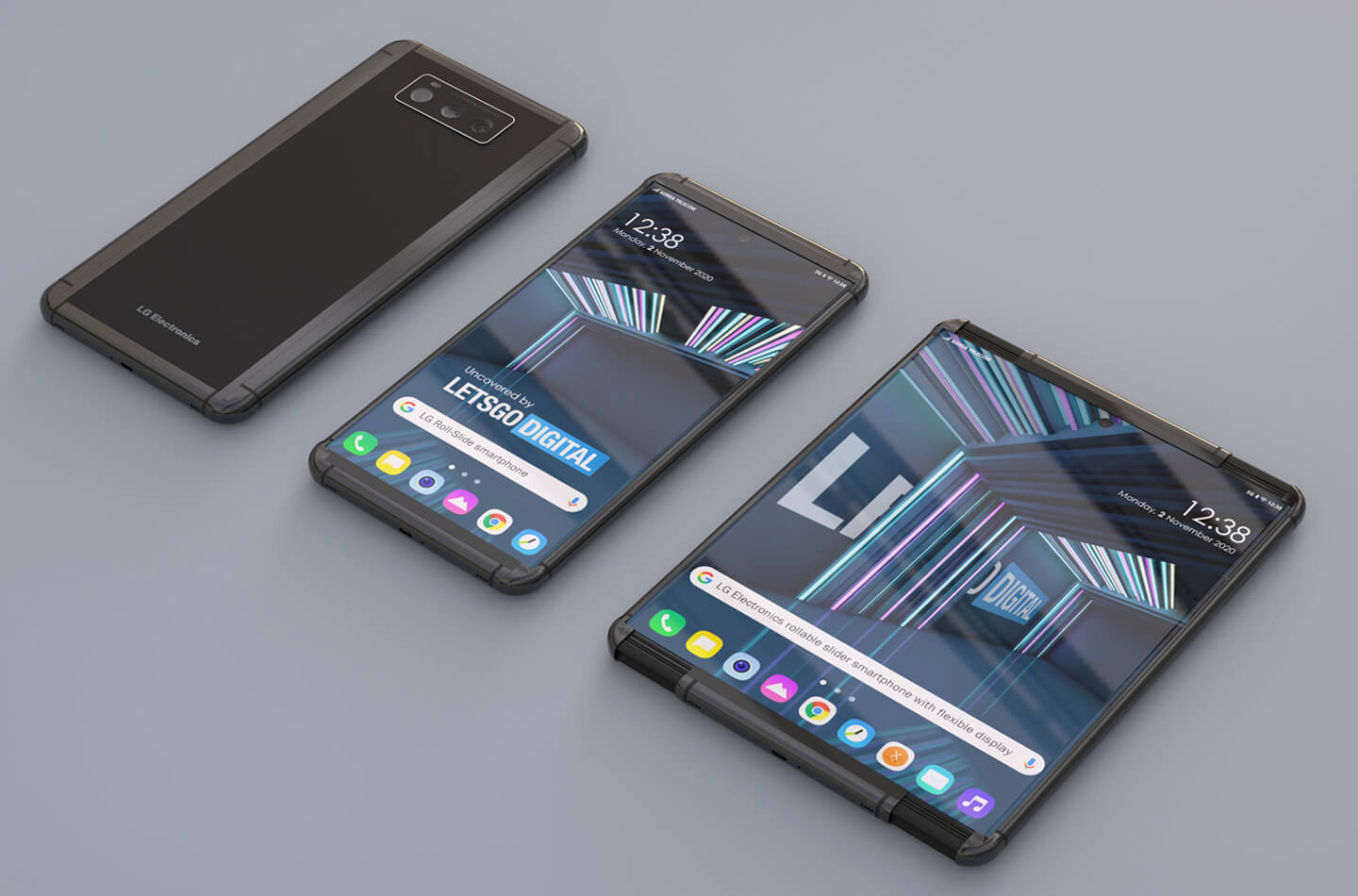 It also describes that the interface is automatically adapted according to how the user holds the device. As an example, a video is displayed in landscape mode. Folded, the video is shown as we are used to, by then pulling out the display from the bottom, various operating elements appear.

Consider, for example, video editing options, while the full video size remains visible in the top screen part. You can also browse through the playlist to select a different video. Obviously, this form of operation is not only possible when displaying and operating videos and photos.

For example, the pulled-out screen part can also serve to display a virtual keyboard. Ideal, because the keyboard will then be significantly larger compared portrait mode. With current smartphone models, however, it is not really user-friendly to type in landscape mode, because you then have a relatively little screen surface left – which won’t be the case with this LG rollable smartphone.

The larger screen surface also makes this rollable smartphone ideal for multi-tasking, by running multiple apps side by side in split-screen mode. 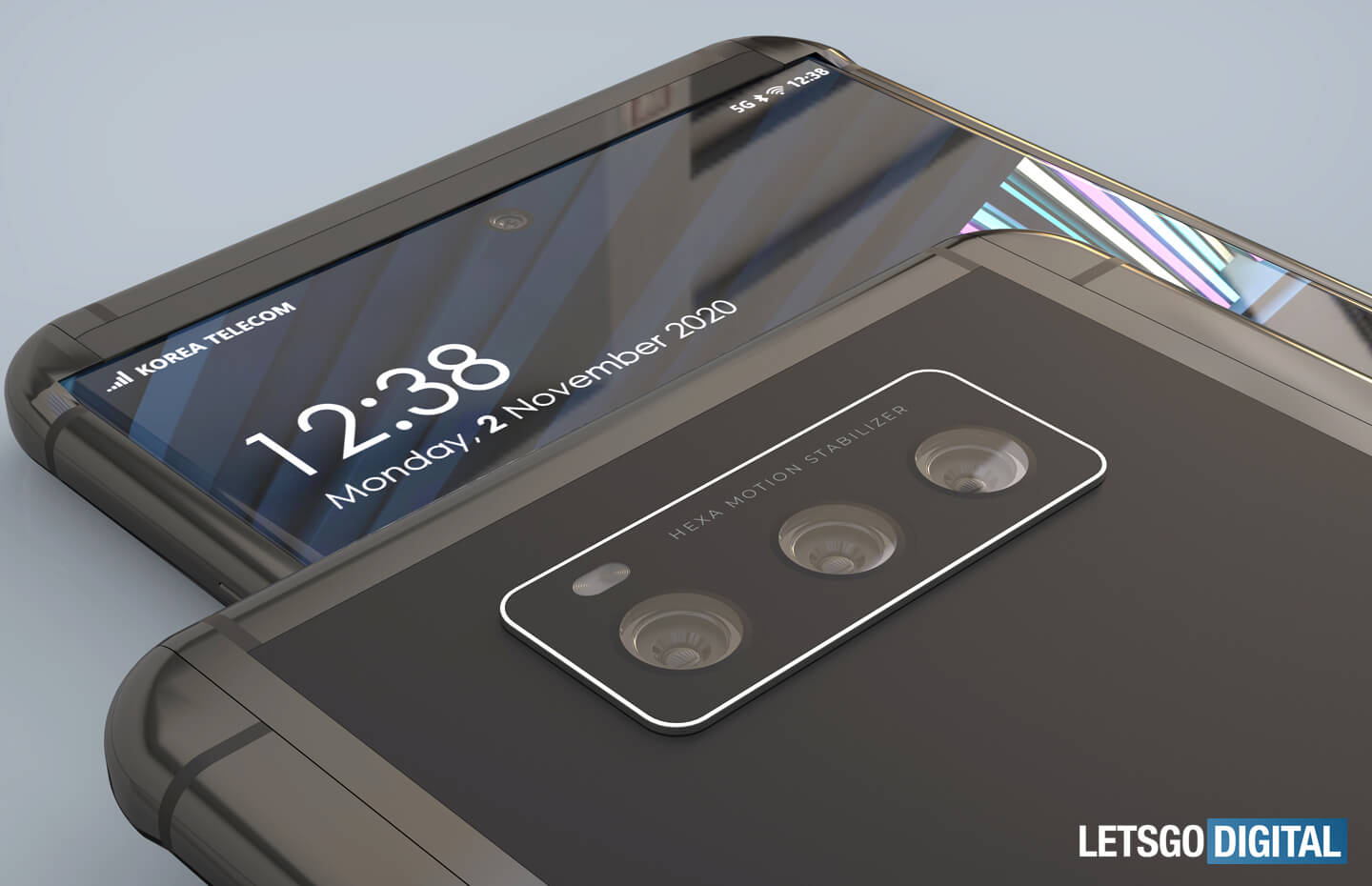 The patented LG extendable smartphone with rollable display has a modern look. Remarkably, there is no speaker and / or camera visible at the front. Nevertheless, the documentation describes these components will be built in.

In the product renders produced by LetsGoDigital, we assumed a hole-punch selfie camera will be used. As it does not seem likely that the camera will be placed in the frame itself. Since there is still a secondary frame behind this, there will simply be too little space for a camera module.

On the right side of the device is a physical button that functions as a power button and on the left side the volume keys can be found. At the bottom a USB-C connection is integrated, as well as a microphone and dual speaker. Furthermore, the design team of LetsGoDigital has equipped this unique LG smartphone with a triple camera with a Hexa Motion sensor. 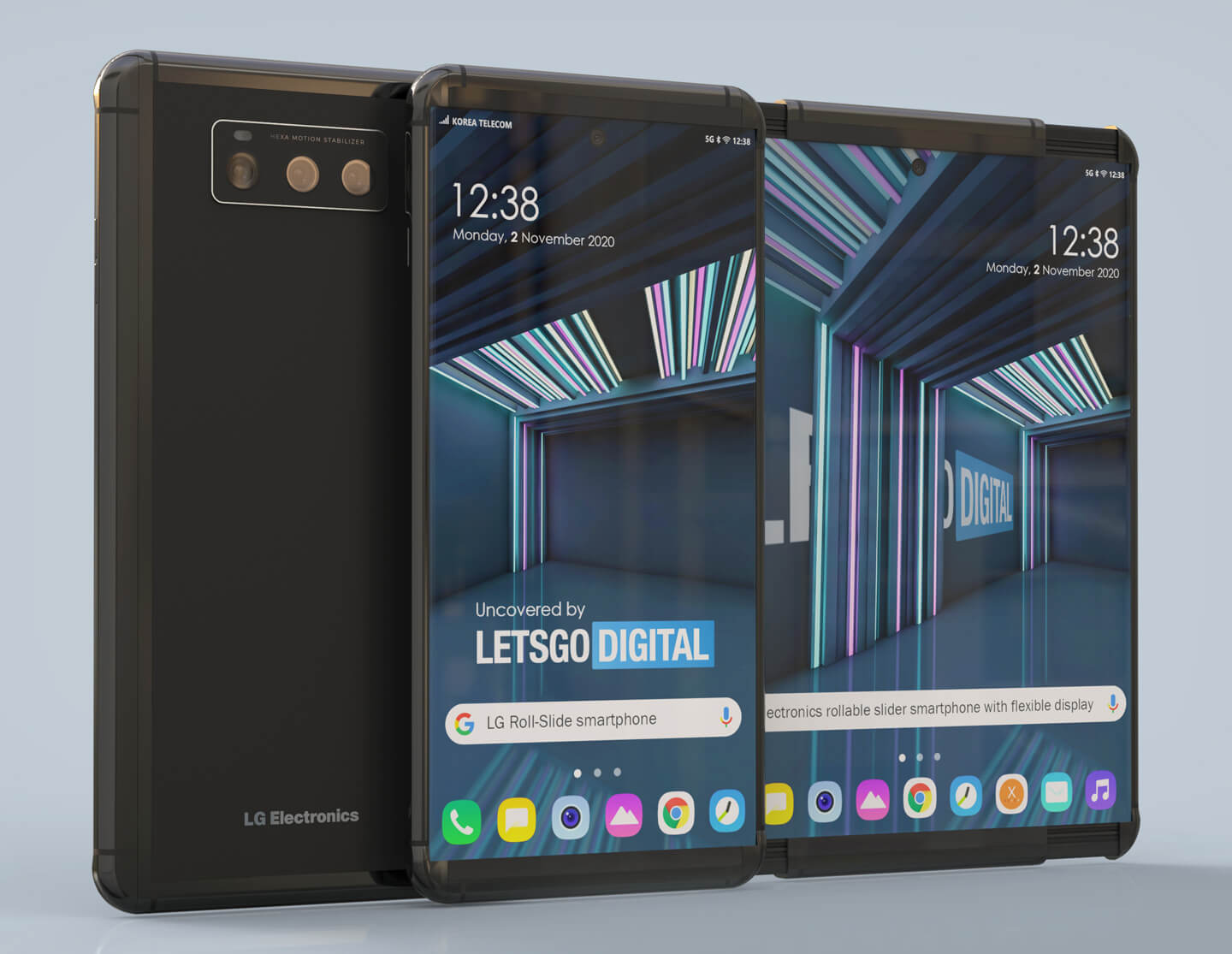 LG smartphones with a flexible display

Last weekend, NeoWin reported that the rollable smartphone teased by LG is being developed under the code name “Project B”. This phone can be pulled out on at least one side and is reported to be released in March 2021.

Although LG has not yet released a foldable smartphone, the company introduced several dual screen phones in the meantime. First by using a case with an integrated display – such as the LG G8x and the V60 ThinQ – and with the Wing there are two displays on top of each other, whereby the front screen can be tilted.

However, all of these phone models have a flat display. Nevertheless, LG – also as a display manufacturer – has the necessary experience in the field of flexible, rollable display. LG Electronics is also the only one that has a rollable TV in its assortment.

Where most smartphone manufacturers are currently working on foldable smartphone models, LG seems to see more of a future in rollable phones. Not only does this improve the durability of the device, it can also prevent a visible folding seam where the flexible screen folds in half – something that unfortunately is still the case with the recently introduced Samsung Galaxy Z Fold 2.

Presuming the right functions and operating options will be linked to it, LG’s rollable phone may well become a very promising device. We are therefore very curious about what LG’s Explorer Project will bring in the future.

Take a look at the documentation of the LG rollable smartphone. 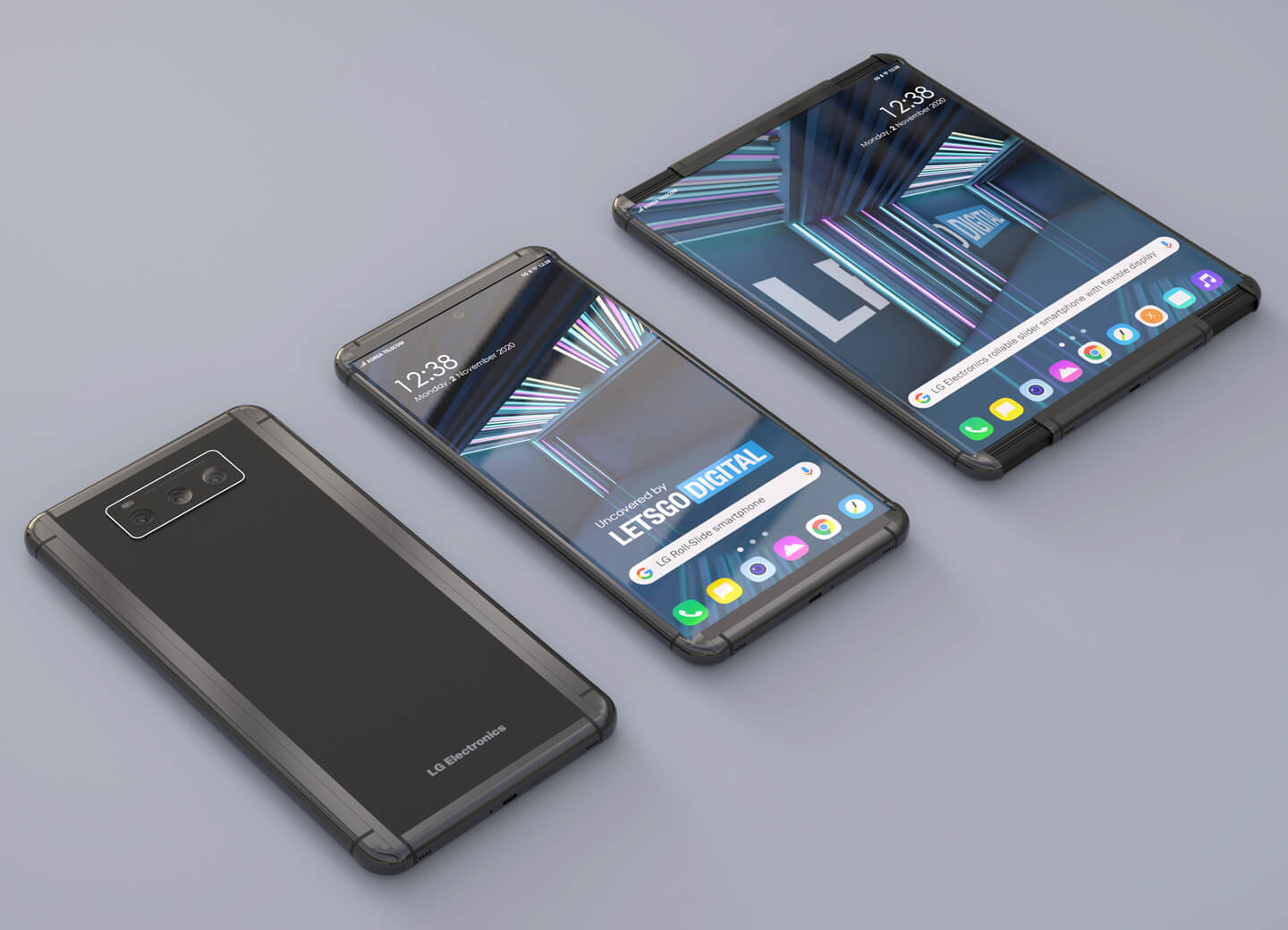 Note to editors : The product renders presented in this article are copyright protected by LetsGoDigital. The digitally made images are based on the patent drawings from LG Electronics and are for illustrative purposes only. This product is not for sale. You can use this 3D artwork for free, as long as you include a clickable source link into your publication. Thank you very much for understanding.