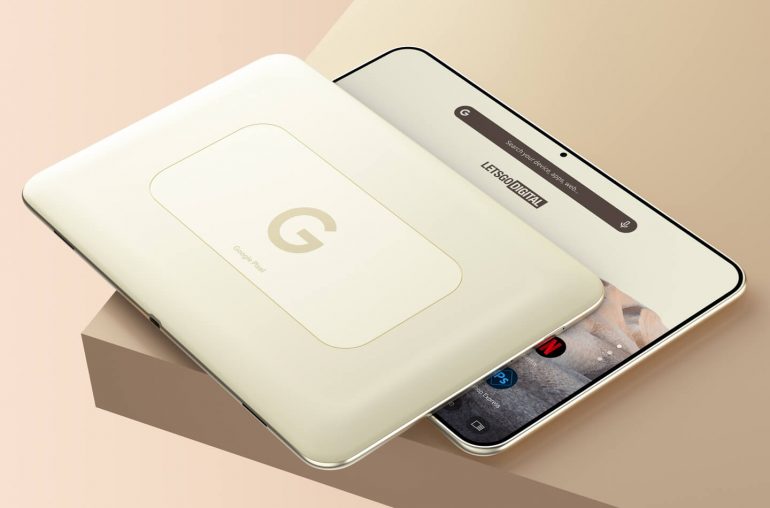 Google is not just a search engine. The company also produces many tech products, such as the Google Pixel smartphones, the Nest speakers and cameras and of course the Chromebook 2-in-1 laptops. Until 2019, the US manufacturer also produced tablets, the 12.3-inch Pixel Slate was the last model. Afterwards, the focus has shifted to convertible laptops, which offer both the convenience of a laptop and a tablet.

A recently published patent from Google LLC shows that the R&D department already worked on a highly advanced design at the time. The Mountain View company has patented a very futuristic-looking tablet. 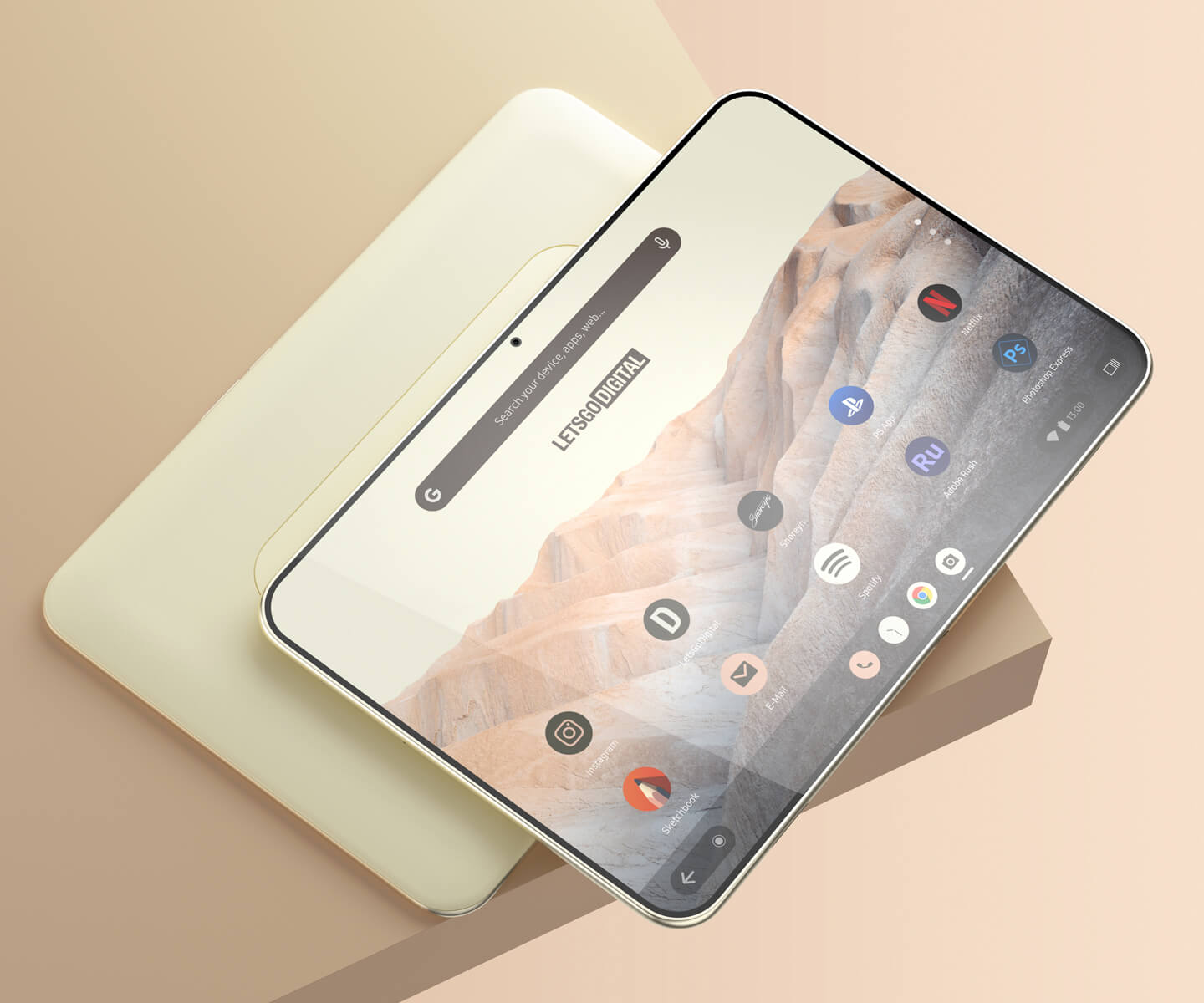 The patent dates back to March 2019, but was not approved and released by the Japan Patent Office (JPO) until June 28, 2021. It’s a design patent – meaning the characteristics and specs remain unknown. Google LLC. did patent all sides of the device which gives us a very good view on the design.

The patented Google Pixel tablet has a full screen design with very thin bezels and rounded corners. At the rear, the housing is rounded on all four sides, which contributes to a good grip and a stylish appearance.

Unfortunately, the patent images do not show details about the connections, buttons and/or cameras. However, that hasn’t stopped graphic designer Giuseppe Spinelli, aka Snoreyn, from bringing the patented design to life. Giuseppe has created a series of 3D product renders based on the patent images of Google. 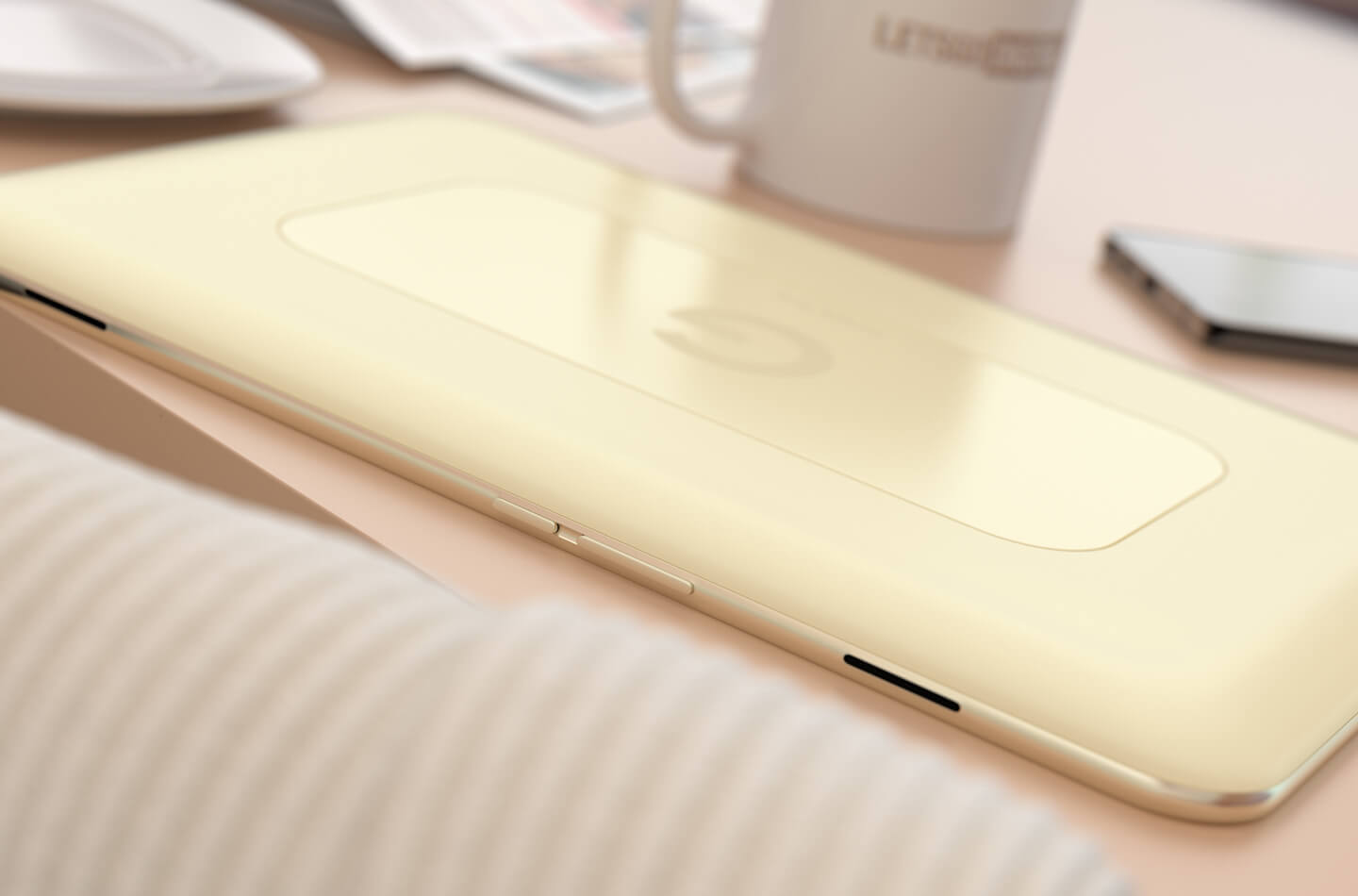 For the color and choice of materials, Giuseppe was inspired by the recently announced Google Pixel 6 smartphones. The tablet is also equipped with the same characteristic power and volume buttons – as can be seen in the render above. Furthermore, the Google Pixel tablet comes with a punch-hole camera, useful for making video calls or taking a selfie.

Of course there are also stereo speakers available, two at the top and two at the bottom. In addition, a USB-C connection has been included at the bottom to charge the device. The back contains a rectangular surface, similar to the patent images – Giuseppe has placed the Google logo on it.

Android 12 has been chosen as operating system. The Google Pixel 6 series, which will be released this fall, will be the first smartphones that run on the new Android 12 OS. Of course, Google could also opt for the Chrome OS, which is used for the company’s 2-in-1 laptops. Google’s last tablet, the Pixel Slate, was also a Chrome OS tablet. Before that, Google’s tablets ran on Android OS, such as the Pixel C from 2015 and the Nexus 9 from 2014. 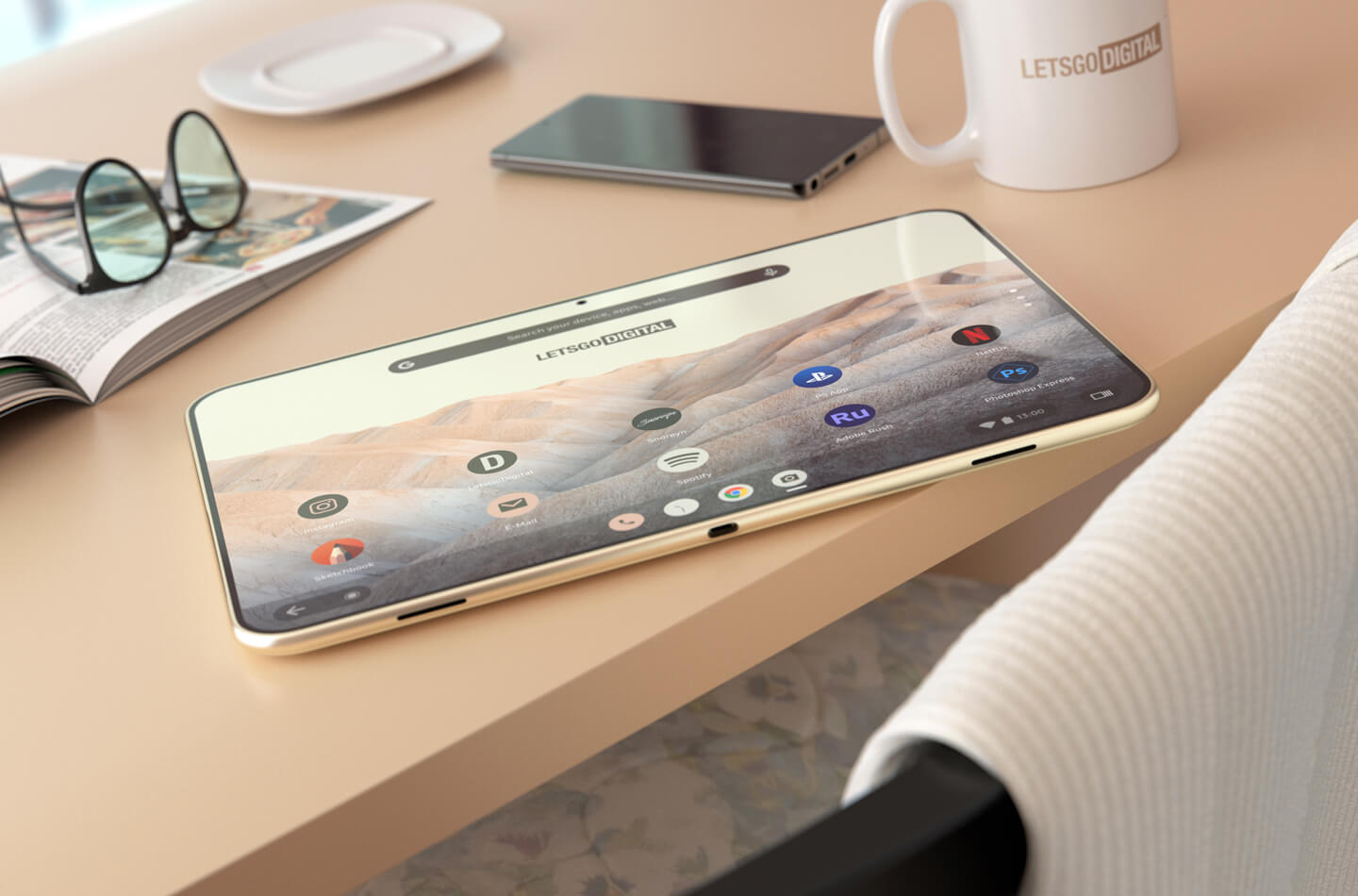 There are no indications that Google actually intends to release a new Pixel tablet. But who knows what the future will hold for us. In any case, it is in line with expectations that the Android OS will be made better compatible for large screens in the future.

To date, Apple is significantly better at this with its iOS system – that’s what makes iPad tablets so popular. While the Android tablet market has declined drastically in recent years. Still, Google will feel an increasing pressure to make Android better compatible with large screens. With the rise of foldable smartphones, the need for an operating system that works well on small and large displays is increasing.

Samsung has worked closely with Google on the first Galaxy Fold to create the best possible user experience. We have now arrived at the 3rd generation of foldable phones, with the Samsung Galaxy Z Flip 3 and Galaxy Z Fold 3 the scaling of apps is already significantly better than before. 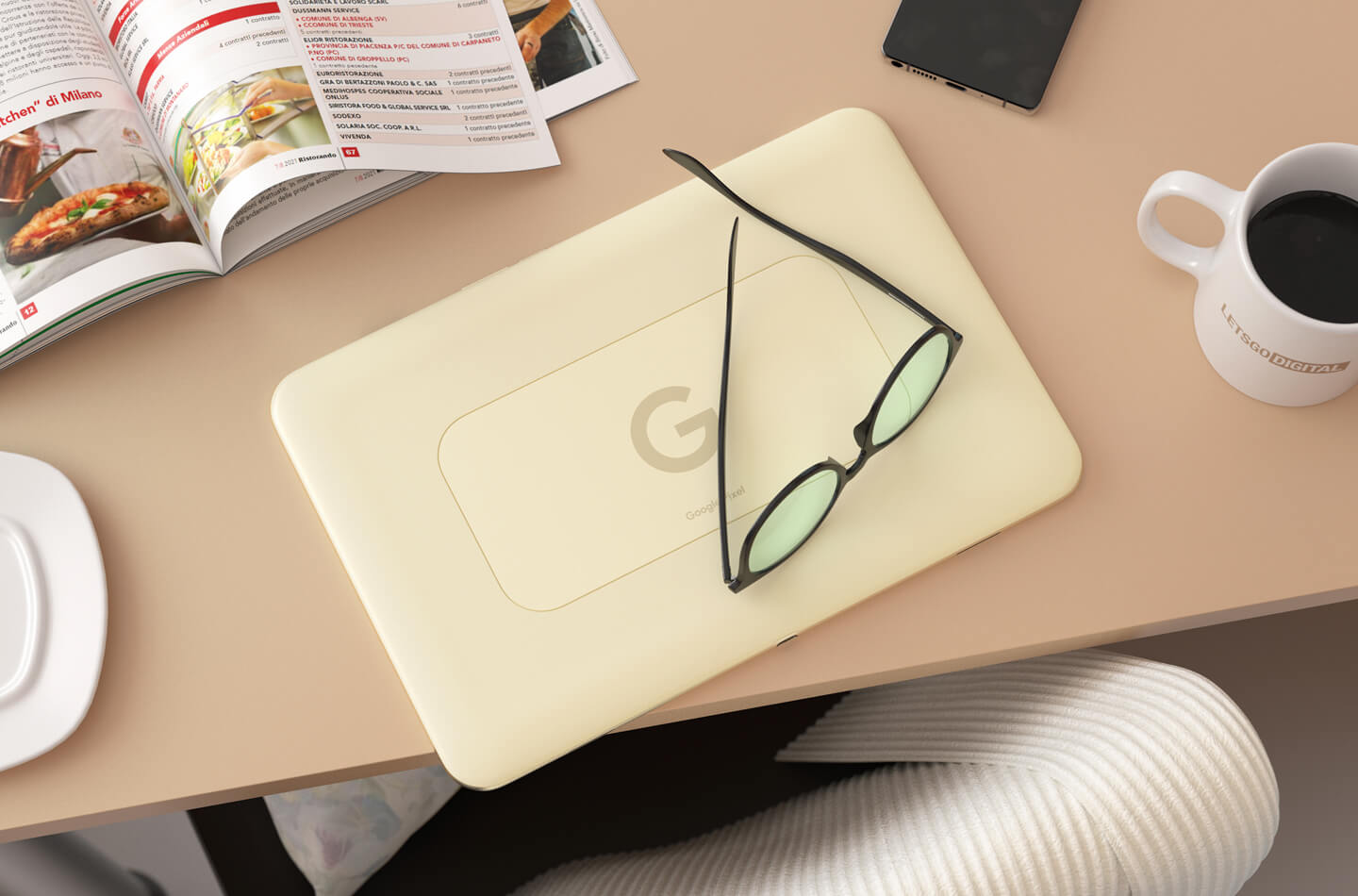 Google is also working on a foldable smartphone, the Google Pixel Fold has been rumored for some time now. Perhaps Google will give a first preview of this device during the launch event of the Pixel 6 (Pro) smartphones. In any case, the Pixel Fold is no longer expected to be released in 2021. Google’s first folding phone will reportedly feature a 7.6-inch flexible screen and runs on Android 12 OS.

You may assume Google will also design a number of new and unique software features for the Pixel Fold, which will probably also be introduced on other foldable smartphones over time.

Whether these developments will also ensure that manufacturers will release more tablets in the future is anything but certain. As foldable/rollable phones will be able to offer similar functionality. For more serious work, laptops are likely to remain popular. 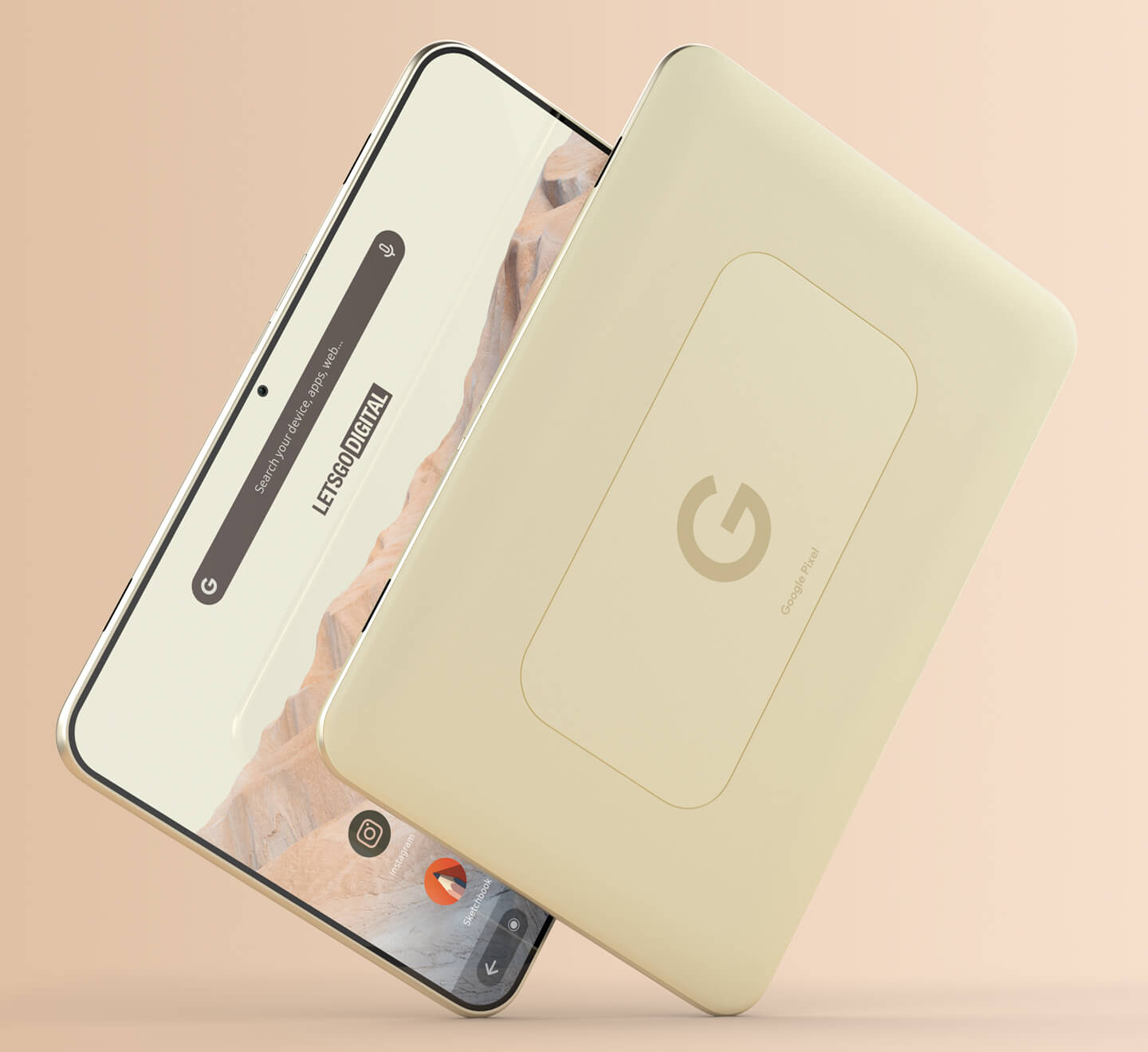 Note to editors : The product images shown in this publication are created by in-house designer Giuseppe Spinelli (aka Snoreyn). The presented 3D renders are for illustrative purposes only, this product is not for sale. Feel free to use the images on your own website, YouTube and/or social media channel, please be so respectful to include a clickable source link into your publication.