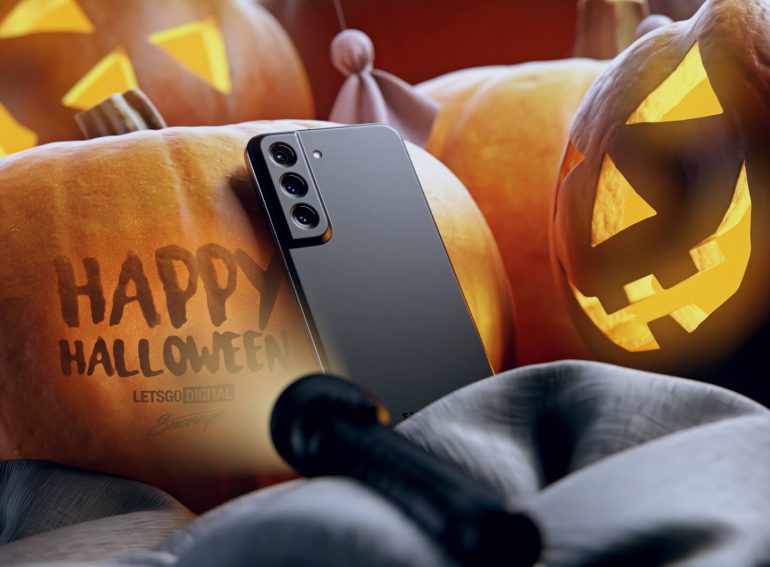 Take a look at the Galaxy S22 in a spooky Halloween theme and read more about the expected features, the camera, the price and the release date.

Last month, LetsGoDigital and Super Roader revealed the design of Samsung’s next top model. The Samsung Galaxy S22 Ultra will have an S Pen compartment and a water drop camera design. The S-series 2022 model range will of course not only consist of an Ultra model. A base model is also expected, in the form of a Galaxy S22 as well as a Galaxy S22 Plus. Now that the design of the Ultra is known, many wonder what the camera of the other two models will look like. 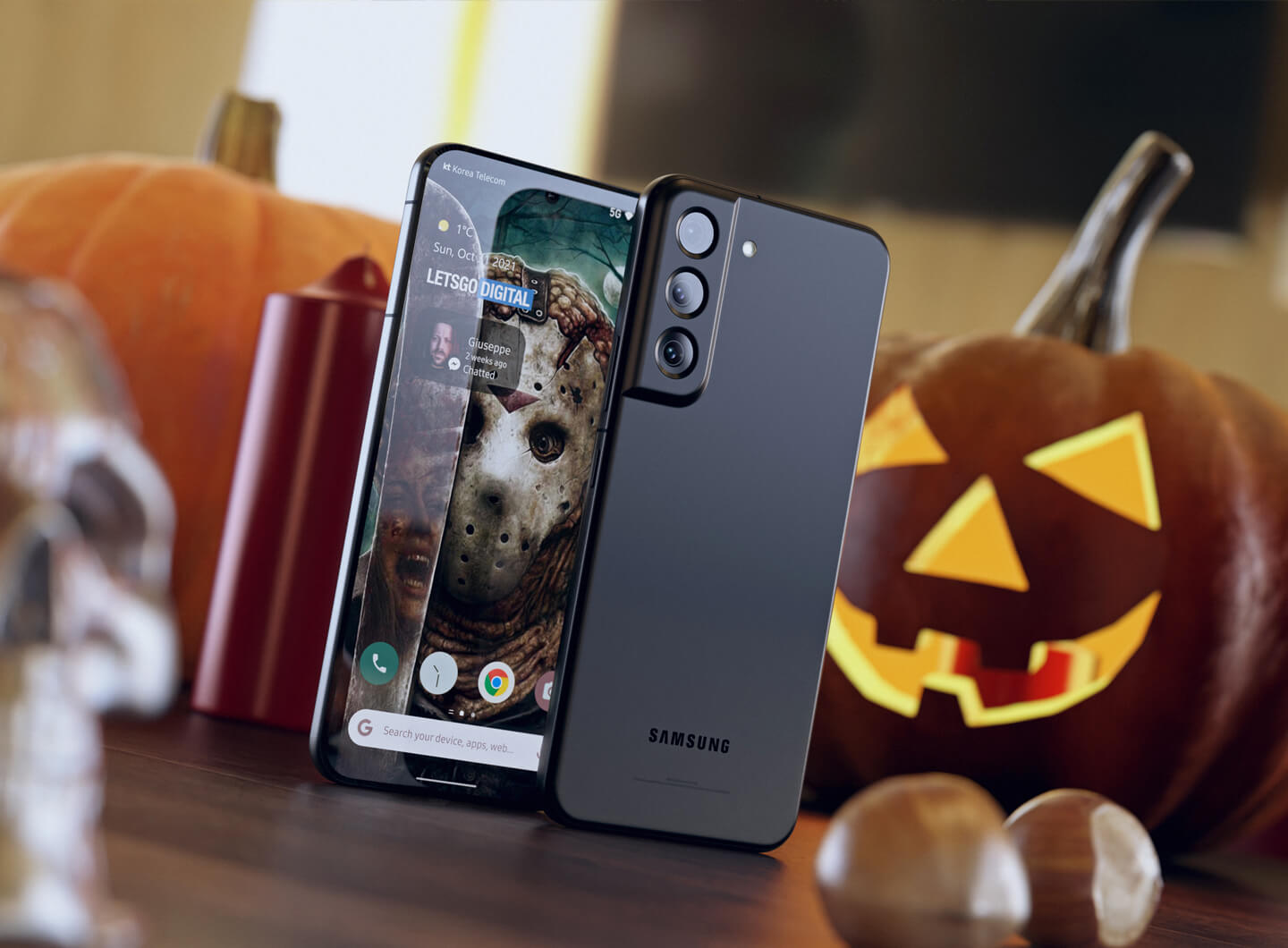 Thus the question arises; will the Galaxy S22 and S22 Plus also be equipped with a water drop camera system, just like the Ultra model? We can now answer this question with certainty as ‘No’. The Galaxy S22 and S22+ will have an almost identical design as their predecessor.

This is evident from new information we have received from Super Roader, a South Korean former Samsung employee. Unfortunately, in order to protect the source, we cannot divulge the type of information we have received, nor can it be published directly. Nevertheless, we have been able to establish that the S22 (Plus) will have a significantly different design than the S22 Ultra.

Using the information we obtained, Italian digital artist Giuseppe Spinelli, aka Snoreyn, has created a series of product renders of the anticipated Samsung Galaxy S22 5G. The Plus model will have a similar design as the base model – apart from the size.

The images are made in the spirit of Halloween. Including a hollowed-out pumpkin, from which a scary face has been carved – also called Jack O’Lantern, based on an Irish folk tale.

Last week Ice Universe tweeted that the Galaxy S22 will have a flat front and back. This is also made visible in Snoreyn’s product images. The edges are not as flat as with the iPhone 13 – as this would be at the expense of the grip.

In addition, there is a minimalistic difference compared to the S21 series. The metal camera island that optically continues to the side of the device will have a less round finish on the 2022 models.

It is remarkable that Samsung keeps the camera design of the S22 (Plus) largely the same as the S21 (Plus). In previous years, the design was constantly revised. Costs may play a role here. After all, Samsung has achieved significantly worse sales results with the S21 series than in previous years.

Anyway, it is clear Samsung will make a greater differentiation between the two base models and the top model this time – the Ultra model will get much more similarities with the Galaxy Note line-up. This applies to both functions and design.

Below you can watch the YouTube video of the South Korean SuperRoader in which he discusses the design of the Galaxy S22. You can turn on the translation via the settings icon.

The Samsung S22 is expected to be equipped with a flat 6.06-inch Full HD+ display. This means that the dimensions will be slightly smaller than before. For comparison, the S21 has a 6.2” screen. The Plus model will also shrink in size, it will most likely be equipped with a 6.55” display, instead of 6.7”.

The 19.5:9 screen ratio remains intact. The resolution also remains the same, the same applies to the 120Hz refresh rate. The bezels will be further reduced, resulting in a larger screen-to-body ratio. The bezel is also made symmetrical, which will undoubtedly contribute to an extra stylish look. 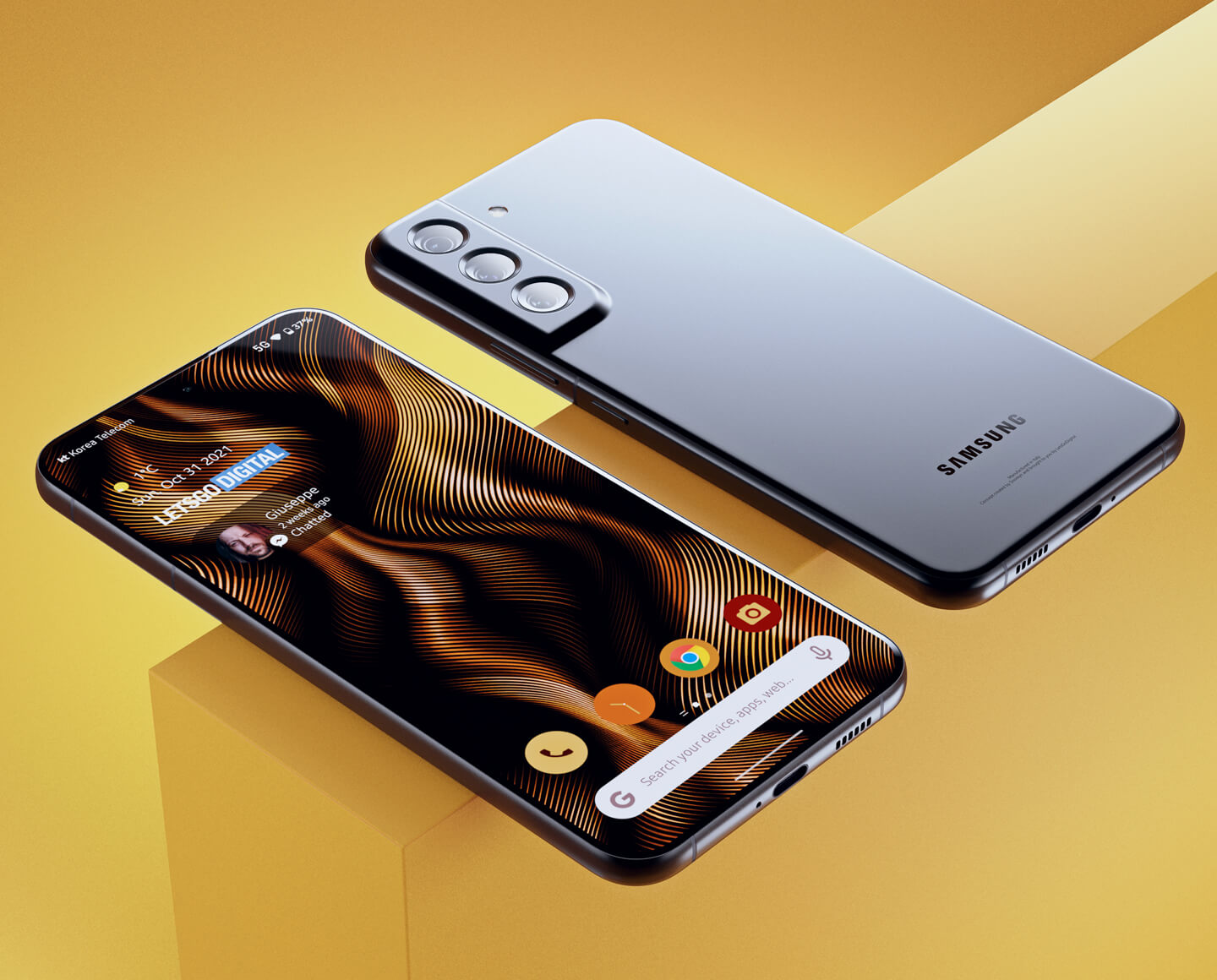 When it comes to the camera configuration, it is expected Samsung will remain the same 10MP front camera. The rear will contain a triple camera, the configuration will be changed. Most likely, the new Samsung ISOCell GN5 will be used for both the S22 and S22+. This is a 50 megapixel image sensor with large 1.0µm pixels and improved autofocus performance.

The 12-megapixel ultra-wide-angle camera will most likely be maintained. In addition, the Samsung Galaxy S22 is expected to be equipped with a new telephoto camera. It is probably the same 3x optical zoom camera that can also be found in the S21 Ultra. This is a 10MP image sensor.

Although this image sensor has a lower resolution than the 64MP zoom camera used in the S21, the new lens will provide improved zoom performance. The current model offers 3x hybrid zoom. The renewed zoom camera will support 3x optical zoom – without any loss of image quality.

The new Galaxy S series smartphones will run on the Android 12 operating system in combination with One UI 4. The chipset will also be renewed. The European models will most likely be powered by the Samsung Exynos 2200 with AMD GPU. The Qualcomm Snapdragon 898 will be used in many other parts of the world. Both chips will offer 5G support.

It is in line with expectations that multiple memory variants will be released. After all, the Galaxy S22 models will not offer microSD memory card support – unfortunately this was also the case with the S21 series. Presumably, the basic variant will again be equipped with 8GB of RAM and 128GB of storage memory. 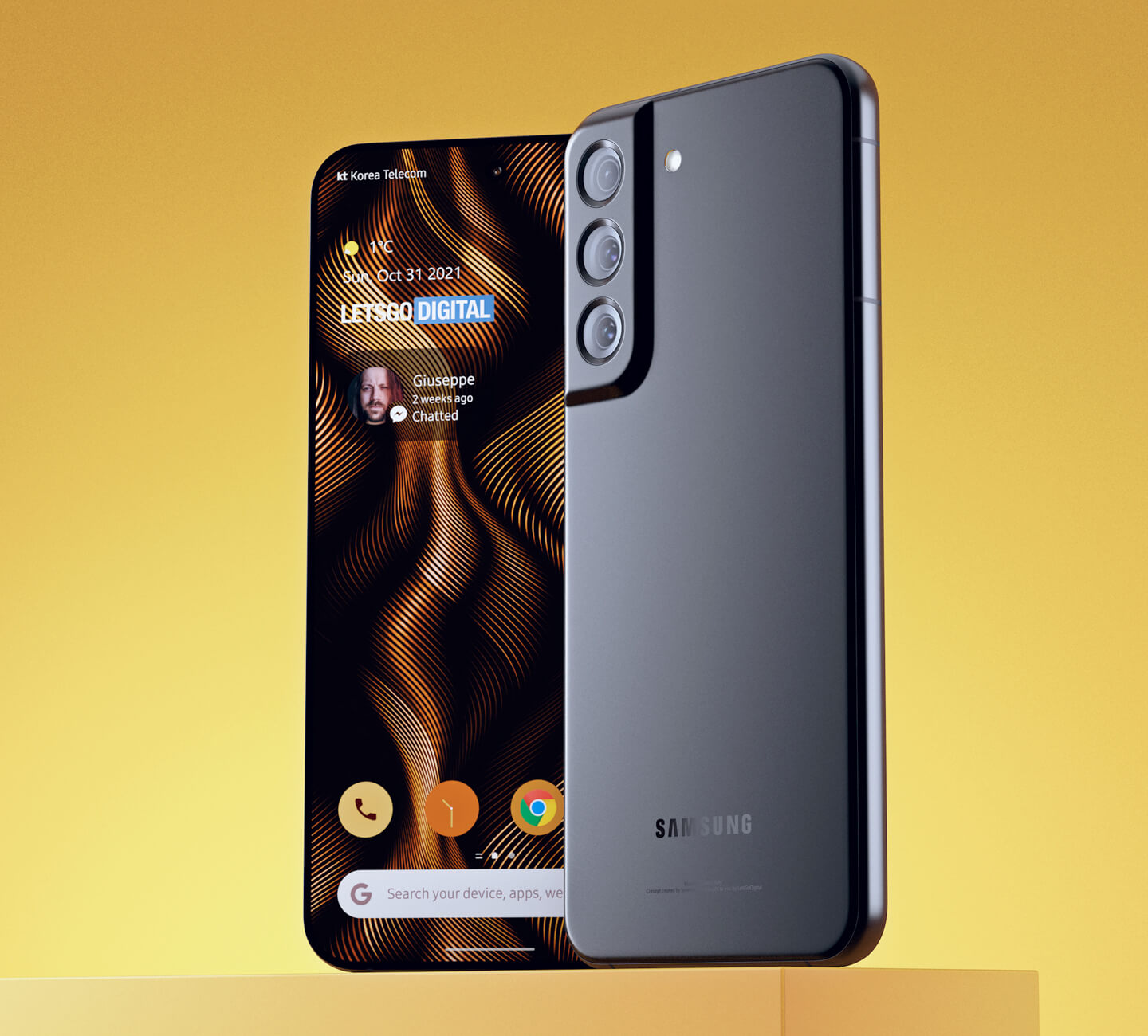 As for the battery capacity, the Samsung S22 5G will reportedly be equipped with a 3,700 mAh battery. That is smaller than the 4,000 mAh battery that can be found in the S21. However, the screen will also be slightly smaller and the new chipset will undoubtedly be extra energy-efficient. Possibly this will result in a comparable battery life as its predecessor.

Charging will unfortunately not go any faster, the S22 will again support 25W charging. Incomprehensible! Especially since it has been known for some time that a 65W Samsung charger is in the making. In addition, Samsung already launched phones that offered 45W support in 2019 – like the Galaxy Note 10 Plus.

Users of the S22+ and S22 Ultra may have better luck. These phones are said to be made compatible with a 45W charger. However, this is not entirely certain yet, as all three S-series models have recently been certified in China with a 25W charger.

Regardless of how quickly the device can be charged, a charger will not be included as standard. The company has already started this trend at the time of the Galaxy S21 launch. You can decide to keep using your old (slow) charger or purchase a new one as an optional accessory.

Normally, the objectives for the basic and plus models are not that far apart. It is the first time that Samsung has deliberately selected one model from the series to produce additional quantities, according to The Elec. For comparison, with the S21 series the base model accounted for about 40% and the other two models for approx. 30%.

Samsung has not only revised the sales expectations of the new S-series smartphones. The company has also adjusted targets and expectations for other phone models, due to the persistent chip shortages caused during the corona pandemic.

Yesterday, Roland Quandt announced that Samsung has now started to ramp up the mass production of parts for all Galaxy S22 models. Now that the production has started, the question remains; When is the S22 series expected? 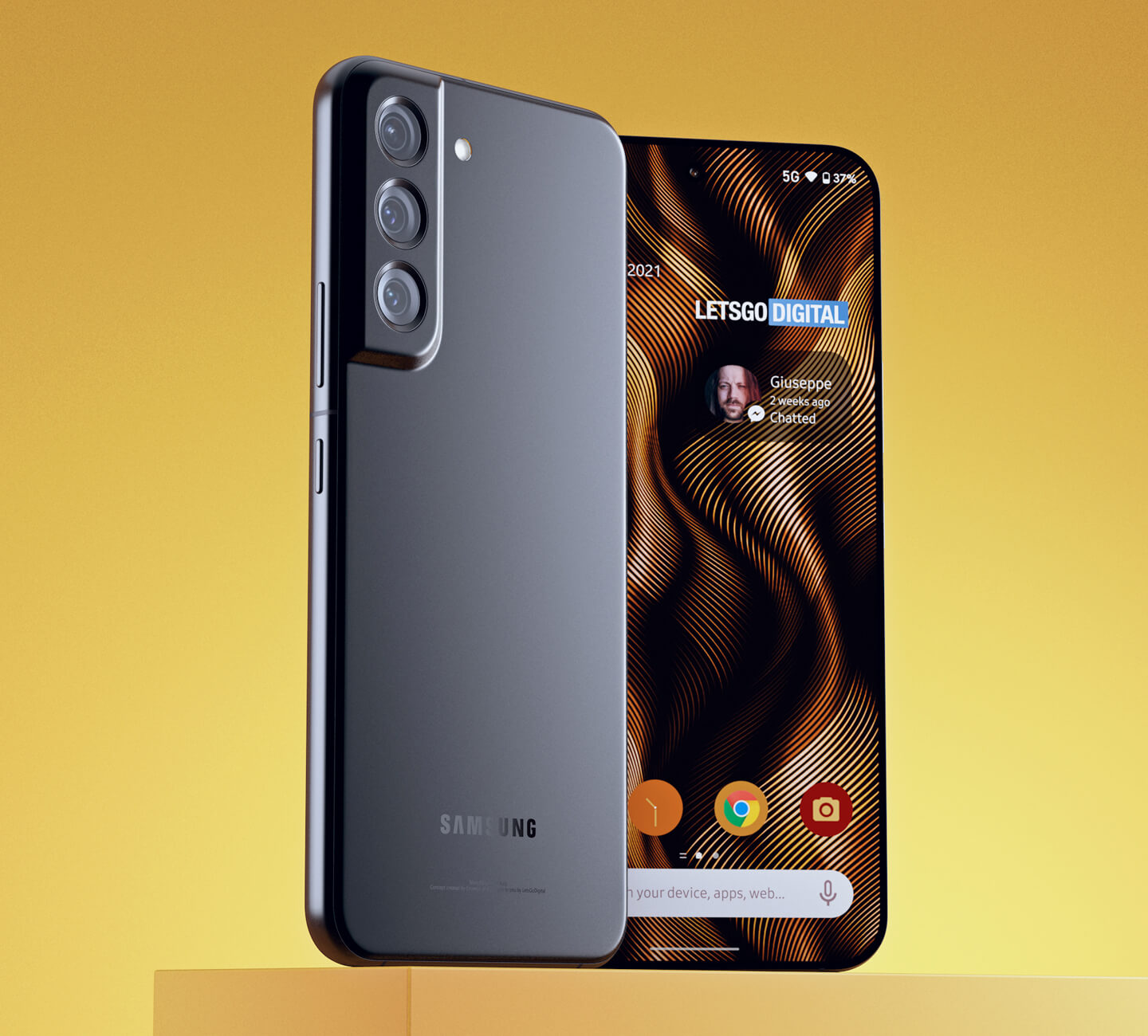 When can you buy the Galaxy S22?

A lot has already been said and written about the expected release date of the new S-series smartphones. Samsung opted for an introduction in January this year, which was a month earlier than in previous years. For a long time it was assumed that the S22 will also arrive in January.

However, it is very well possible that Samsung will postpone the release until early / mid-February. In fact there is another new S-series device on the way; the highly anticipated Galaxy S21 FE. This mobile phone is scheduled to be launched on January 11, 2022. It is therefore likely that Samsung will announce the S22 series a few weeks later. Samsung will of course set up a big Galaxy Unpacked event to reveal the new models.

According to Super Roader, Samsung has not yet determined the final introduction date for the Galaxy S22 series. Last week Ice Universe also announced that the release date has yet to be determined. According to Ice, Samsung is considering scheduling the Galaxy Unpacked 2022 event in the last week of January. The devices will then logically be available from February.

It is known that the Samsung S22 will debut in at least four colors: black, white, green and rose gold. We are still in the dark regarding the suggested retail price. The Samsung Galaxy S21 (8GB/128GB) went on sale for a starting price of €850. That was €150 cheaper than its predecessor cost at the time of launch. However, quite a few concessions were made to achieve this.

The new model will have many similarities to the S21 – although both the screen and battery will be slightly smaller. Presumably, this will result in an comparable selling price – at least we don’t expect the price to increase. In the coming weeks there will undoubtedly be more information about the release date, the price and other new features. 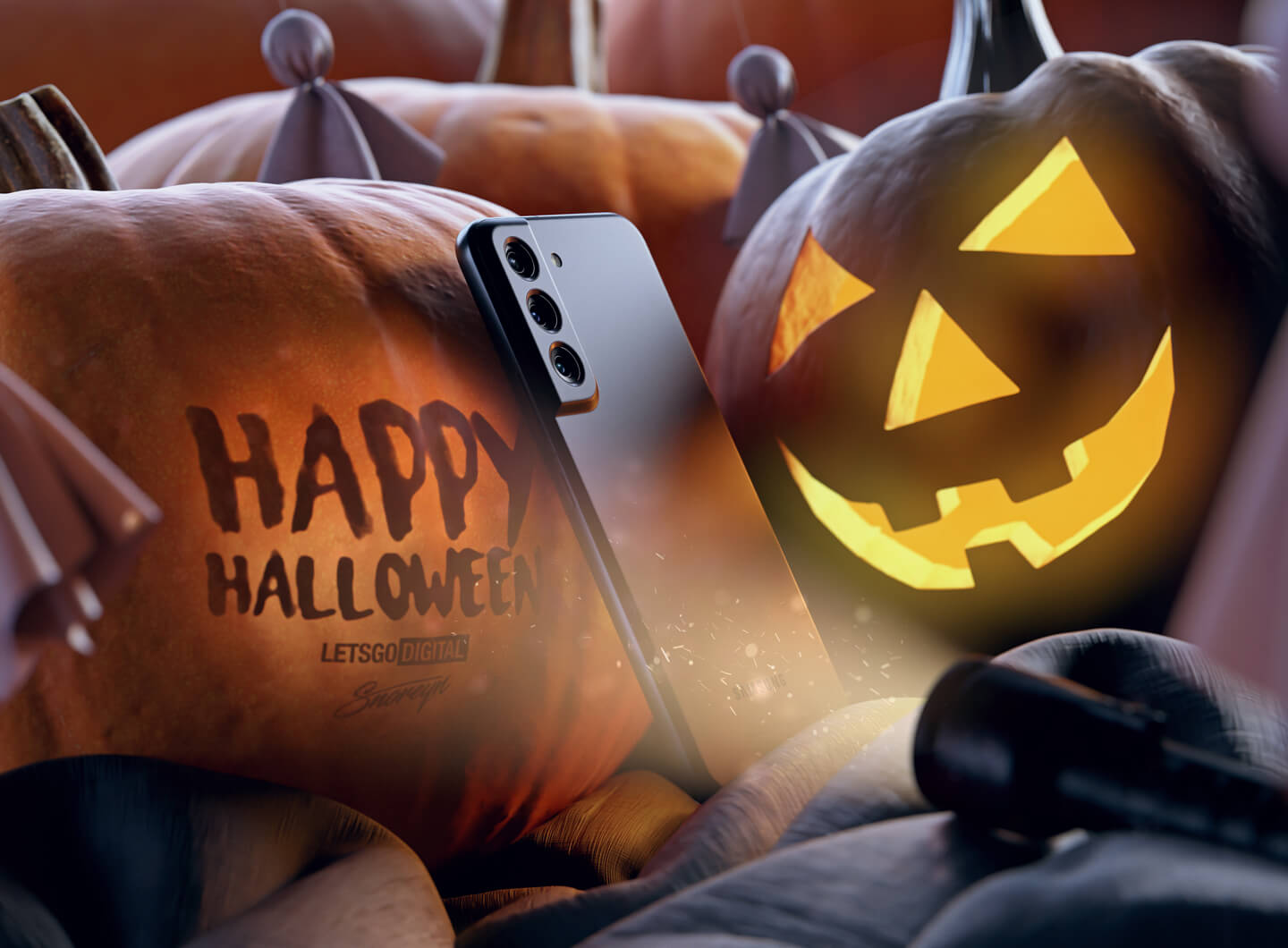 Note to publishers :  The Samsung Galaxy S22 product renders presented in this article are created by the Italian digital artist Giuseppe Spinelli (aka Snoreyn). The 3D renders are based on rumors (not fan-made) and meant for illustrative purposes only. This product is not (yet) for sale. You can use the copyrighted images for your own website, YouTube and/or social media channels, please be so respectful to include a clickable source link into your publication.