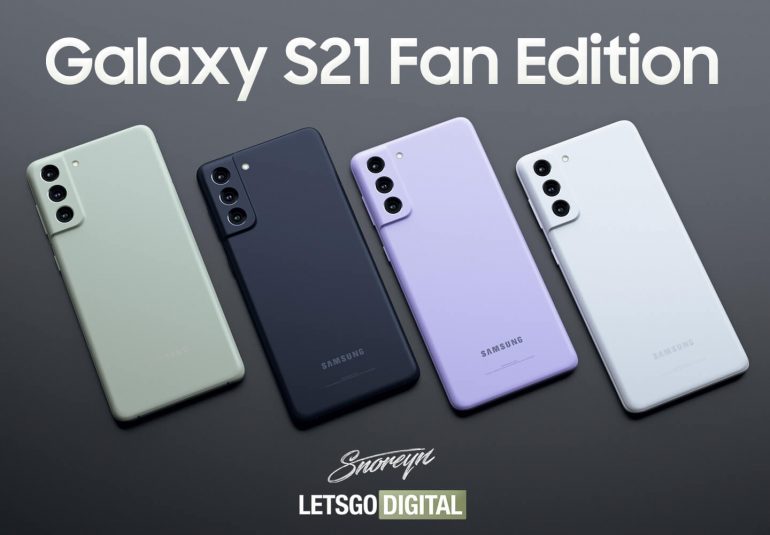 The release of the Galaxy S21 FE has been postponed several times, yet this long awaited Samsung smartphone is still expected at the beginning of 2022.

Last year, Samsung managed to surprise many with the Galaxy S20 FE. It was Samsung’s first Fan Edition smartphone, equipped with many features that Galaxy S fans find important – but at a lower price than other S20 models. It became an outright hit and so many are eagerly looking forward to its successor, the Galaxy S21 FE. This phone model was initially expected in August, during Galaxy Unpacked – where the Galaxy Z Flip 3 and Galaxy Z Fold 3 foldable smartphones were also announced.

However, due to the persistent chip shortages, Samsung has had to decide to postpone the release. Afterwards many hoped that the Galaxy S21 Fan Edition would still arrive in October. Unfortunately, it turns out that Samsung did not meet this date either. During Galaxy Unpacked Part 2, the device once again shone from absence. Instead Samsung released the Galaxy Z Flip 3 Bespoke Edition, as well as a Galaxy Watch 4 Maison Kitsuné Edition. 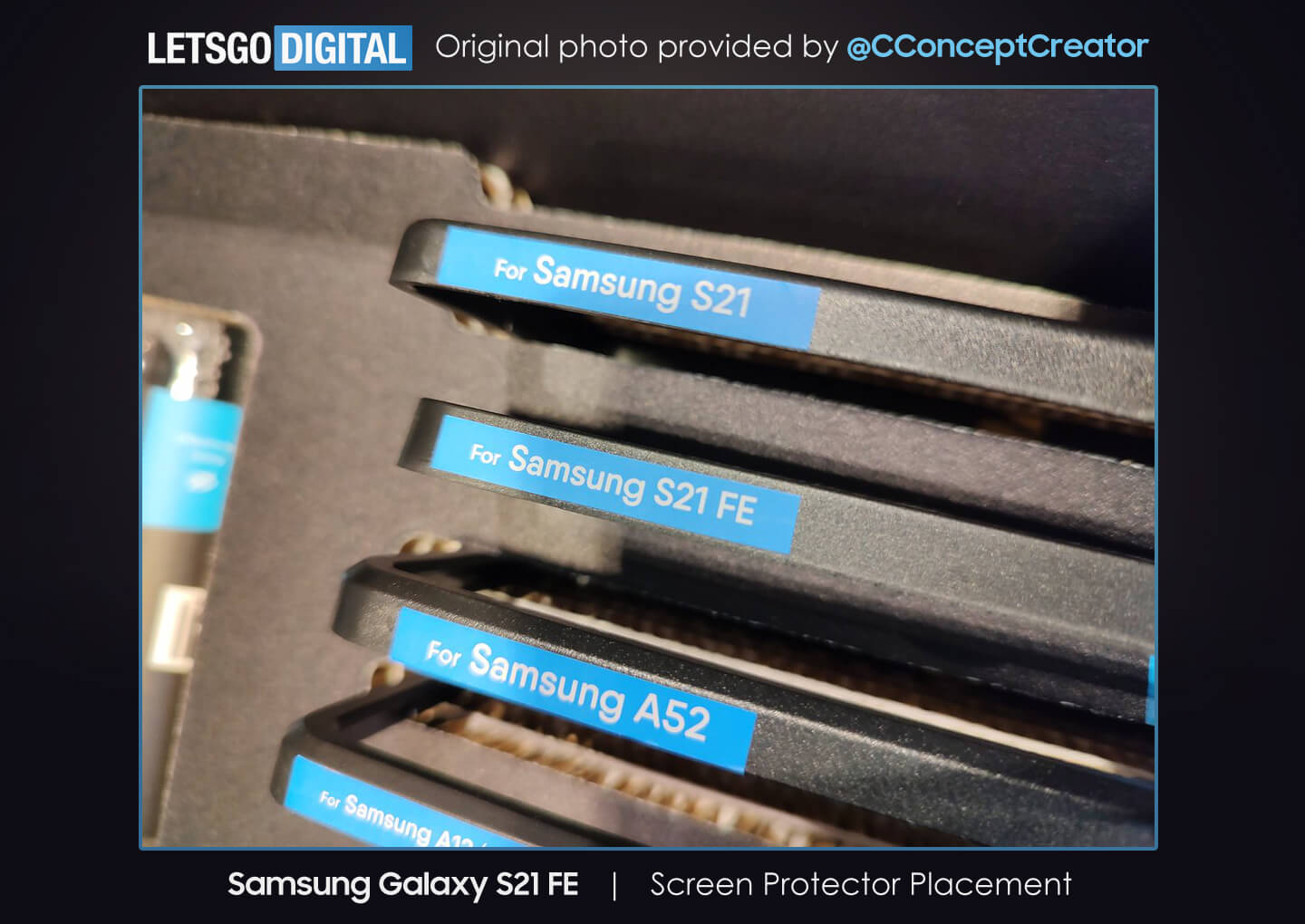 When is the Samsung S21 FE expected?

In the meantime, evidence keeps cropping up, showing that a Samsung S21 FE (SM-G990) is still in the works. The latest information was disseminated by Concept Creator, who posted a photo of a screen protector placement for the S21 FE via Twitter. Unfortunately we cannot elaborate further on the origin of the photo. Nevertheless, this is yet another piece of evidence that the S21 FE is still in the pipeline. In addition, Roland Quandt reported via Twitter that the support page is now back online on the Samsung website.

For a while it seemed that Samsung cancelled the Galaxy S21 FE release. After all, Samsung cannot wait indefinitely as the Galaxy S22 series is expected at the beginning of 2022. Nevertheless, the South Korean manufacturer seems to have found a solution. Samsung plans to release the S21 FE in January 2022. On January 11, 2022 to be exact. Followed by the Galaxy S22 lineup in February 2022.

The Galaxy Tab S8 and Galaxy Tab S8 Ultra will also be announced around the same time. These high-end Samsung tablets have been planned for some time now. The shortage of chips probably plays a role in the delayed introduction here too. 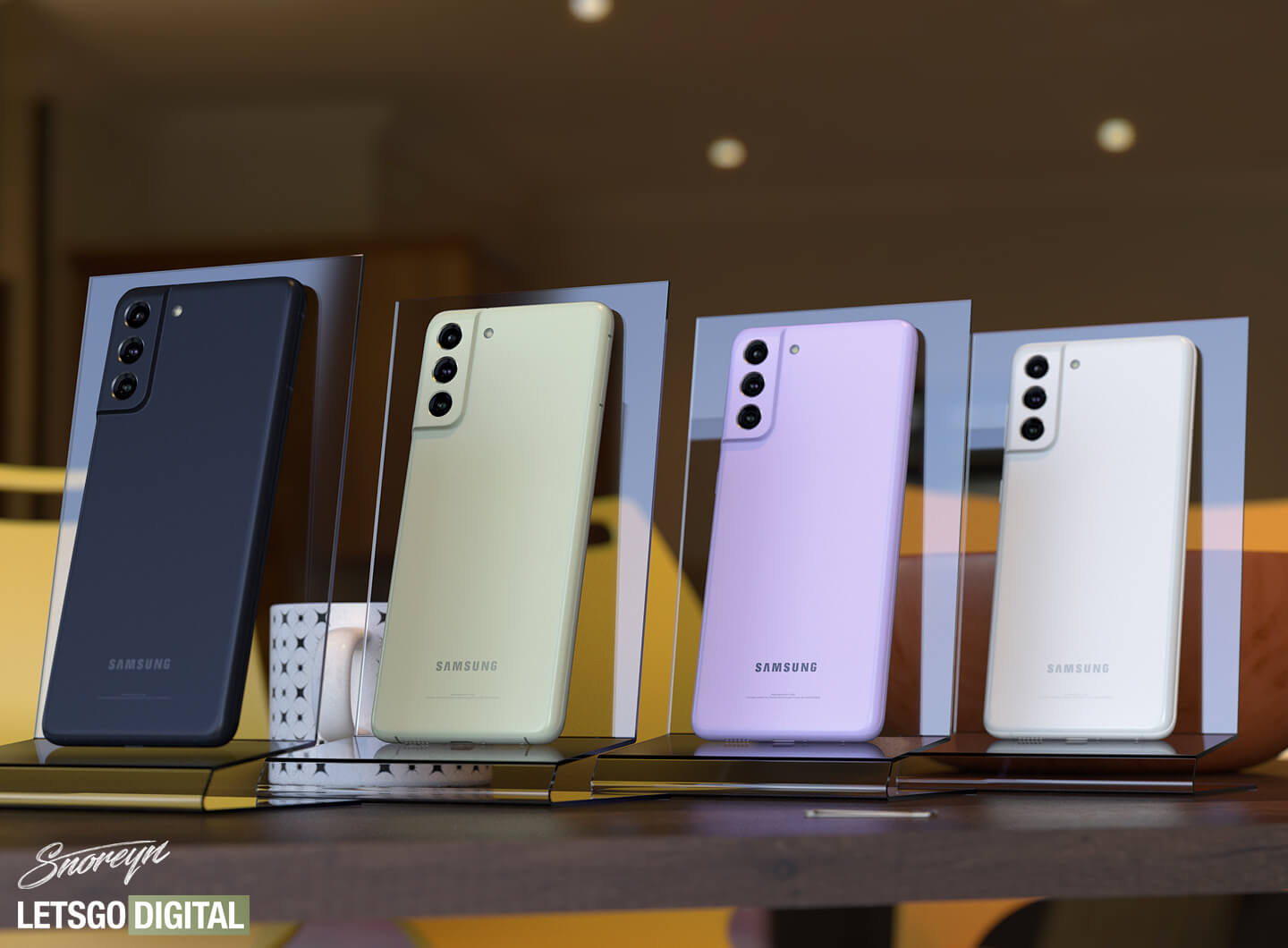 In anticipation of Samsung’s new Fan Edition, graphic designer Giuseppe Spinelli, aka Snoreyn, has created a new set of product renders of the Samsung Galaxy S21 FE 5G. It is the same model that Snoreyn visualized in June, but the colors have been adjusted.

Although it was already known at the time that the Galaxy S21 FE will appear in four colors – gray, white, light purple and light green -, the exact color shades were still unknown. Afterwards, Android Headlines managed to publish a press image showing the S21 FE in all the expected colors. The colors shown on the image were used by Snoreyn to shape the new 3D renders.

In addition, there also seems to be a blue color variant in the pipeline. However, this model will arrive in a limited quantity, according to display analyst Ross Young. Perhaps this color will not be offered in all countries either. 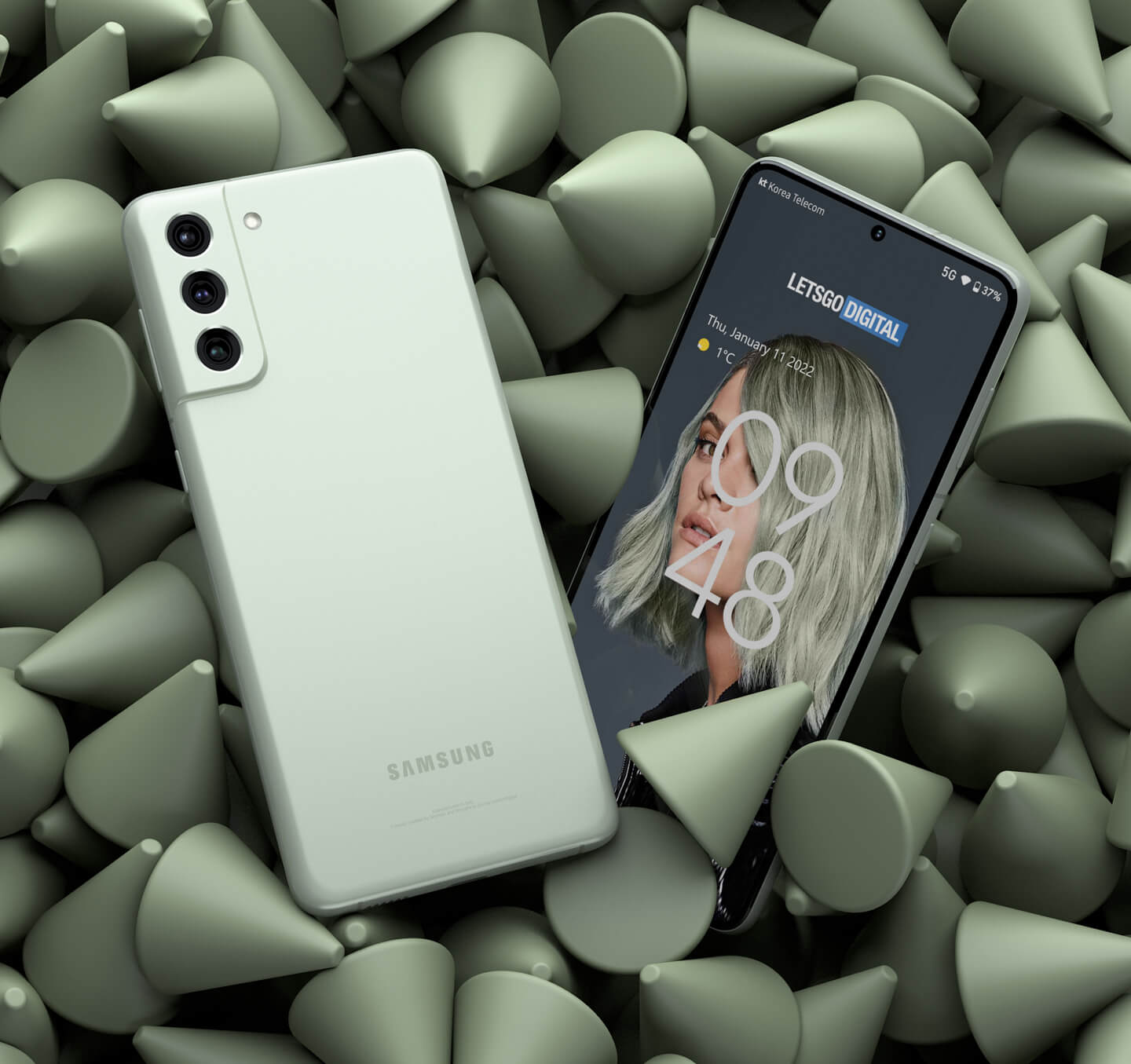 A lot is already known about the Galaxy S21 Fan Edition, from the design to the specs. The S21 FE is expected to feature the same powerful chipset as the other S21 models. It concerns the Qualcomm Snapdragon 888 / Samsung Exynos 2100 SoC – with integrated 5G modem. Presumably, two memory variants will be made available: 6GB RAM / 128GB ROM and 8GB RAM / 256GB ROM. This would match the S20 FE.

The Samsung S21 FE will reportedly be equipped with a flat 6.4-inch Full HD+ AMOLED display with a 120Hz refresh rate. In terms of screen size, the device will fall between the S21 and the S21+. The phone will also be slightly smaller than its predecessor.

Like the base model, the Fan Edition will also have a plastic back panel. Also called “glasttic” by Samsung – plastic that looks like glass. Furthermore, the device will be provided with an IP68 rating, which means that the phone is both water and dust resistant. 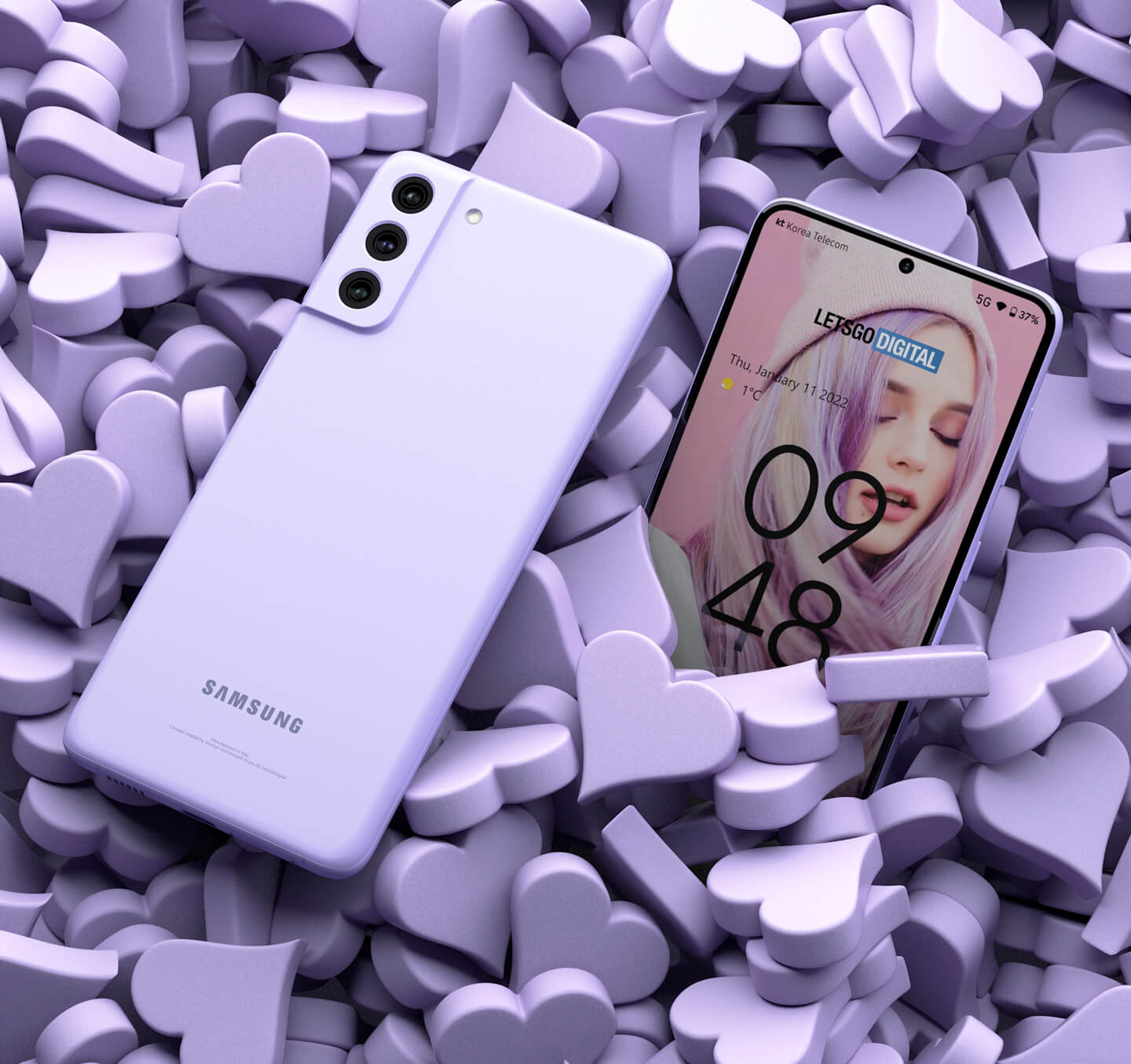 Savings will most likely be made on components such as the camera. The Fan Edition will have a less good camera set-up than the S21 / S21+. The S21 FE is expected to be equipped with a triple camera. The main camera is being upgraded from last year. A 32MP wide-angle camera will be built in – instead of 12MP. The 12MP ultra-wide-angle camera and the 8MP telephoto camera seem to remain unchanged. The latter will enable 3x optical zoom.

The camera module gets the same color as the housing, the flash is placed outside the camera island. These are clear differences compared to its predecessor, the S20 FE, and will give the new model an extra stylish look.

Since Samsung focuses on young people with the Fan Edition, extra attention will also be paid to the selfie camera. The S21 FE will most likely be equipped with a 12MP front camera. That is a lower resolution than the 32-megapixel selfie camera of the S20 FE. Nevertheless, it is expected that the new selfie camera will deliver better image quality by using a larger sensor and/or brighter lens. 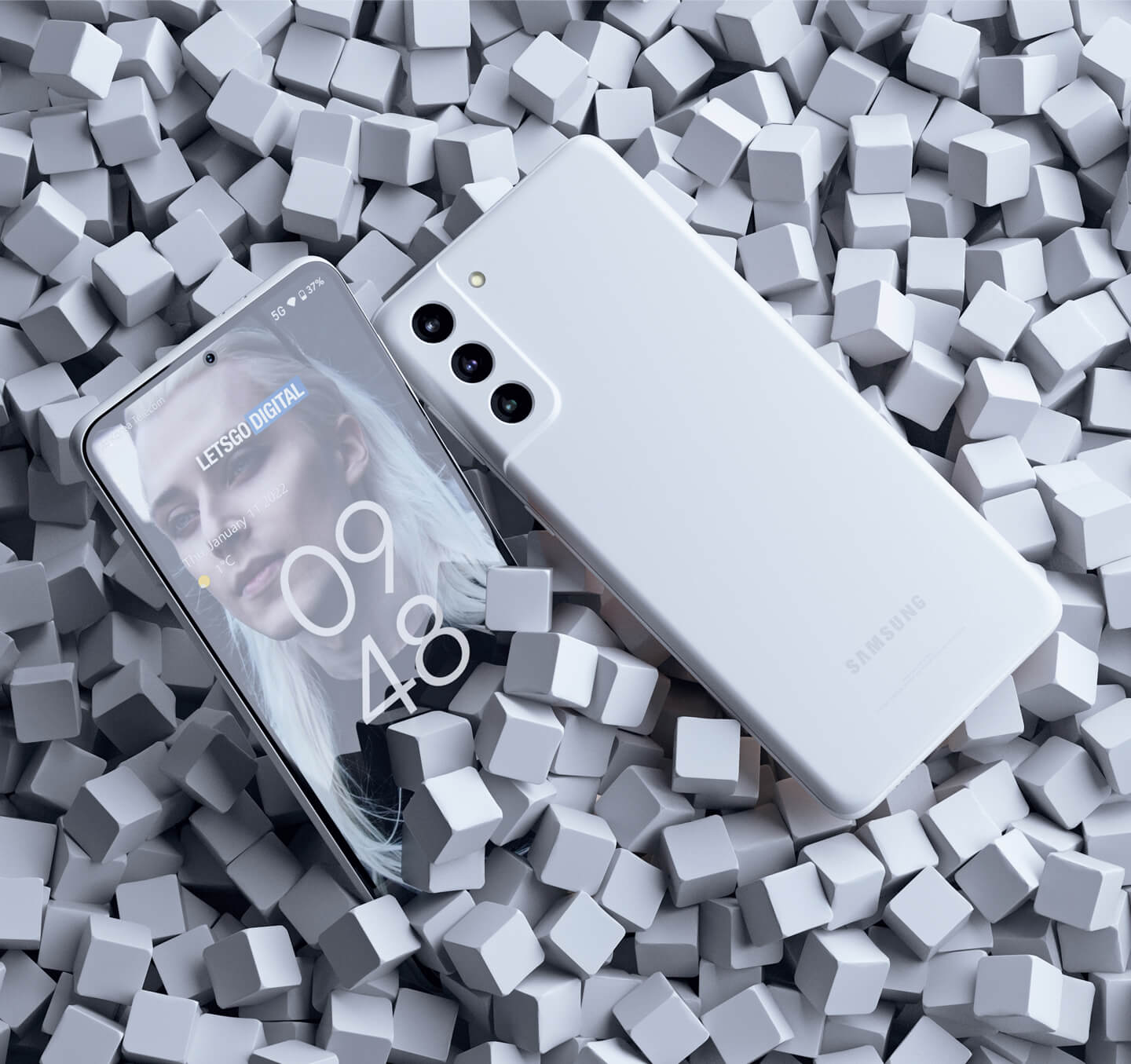 Like the other Galaxy S21 models, the S21 FE will run on the Android 11 operating system, in combination with the One UI 3 user interface. An update to Android 12 will undoubtedly follow quite soon since the new OS has already been officially launched by Google.

Regarding the battery, the Samsung S21 FE is expected to be equipped with a 4,370 mAh battery. It will most likely deliver a similar battery life to the 5,000 mAh battery found in the 6.5” Samsung S20 FE. Various expert reviews have shown that the S20 FE can easily last a full day, even if you use the smartphone intensively.

The Fan Edition is expected to support both wired and wireless charging. Presumably, the smartphone will be compatible with a 25W charger. However, the charger will not be included as standard. It will be offered as an optional accessory – just like the other S21 models. 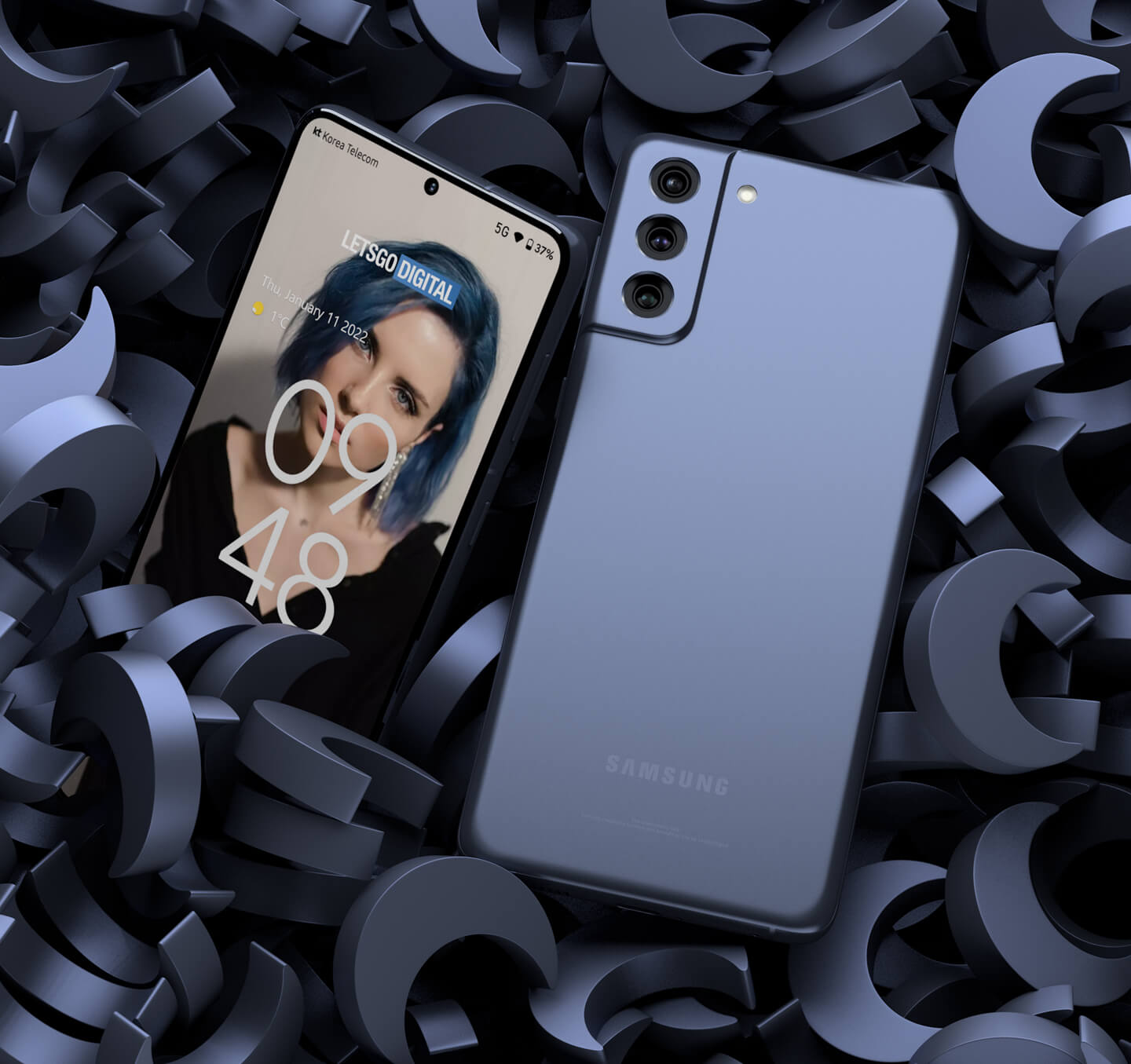 Samsung will probably only release a 5G model this time. The Galaxy S21 FE 5G may go on sale for the same price as the S20 FE 4G a year ago. The Galaxy S21 has also been put on the market for a lower price this year. Moreover, this phone model has been available for quite some time, meaning this phone has already dropped in price. To make the new Fan Edition interesting, Samsung will have to choose a competitive price.

The Samsung Galaxy S21 FE is expected to be officially announced on Tuesday, January 11, 2022. There is a good chance that it will be a silent release, without a major event. One month later, Samsung will set up a Galaxy Unpacked event to reveal the new high-end Galaxy S22 series. 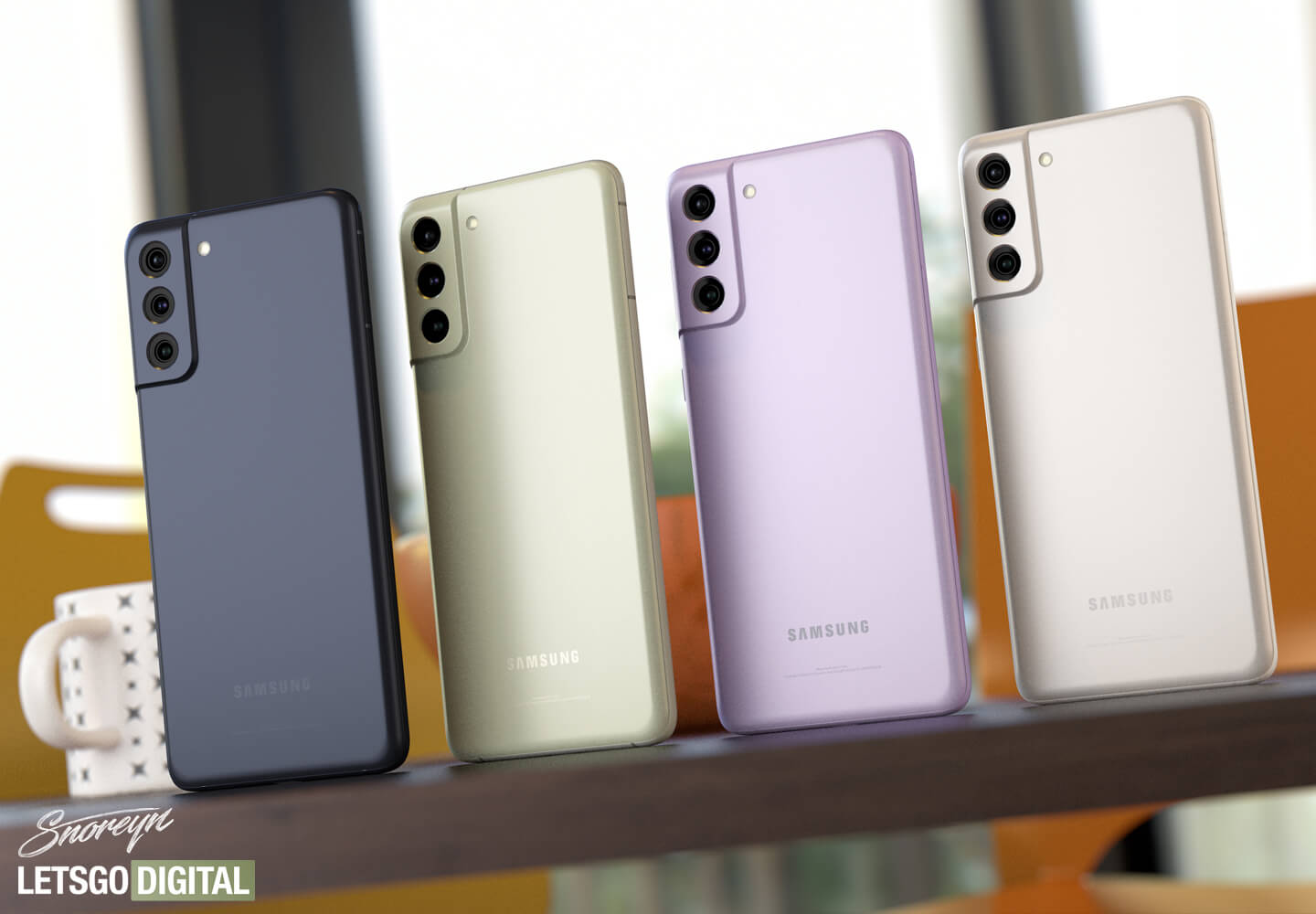 Note to editors : The Samsung Galaxy S21 FE product images shown in this publication are created by in-house designer Giuseppe Spinelli (aka Snoreyn). The presented 3D renders are for illustrative purposes only, this product is not (yet) for sale. Feel free to use the images on your own website, YouTube and/or social media channel, please be so respectful to include a clickable source link into your publication.