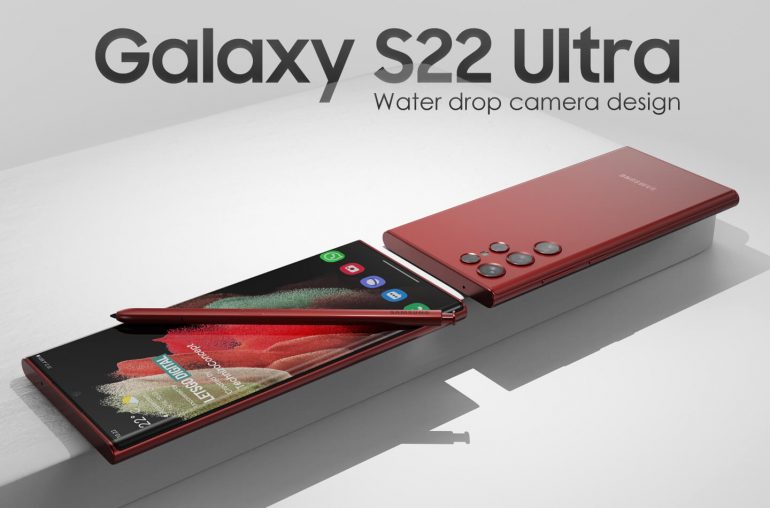 Exclusive: Source reports Samsung provides the Galaxy S22 Ultra with a water drop camera design - without camera-island. This is what the phone looks like.

In three months, Samsung will officially announce the new S-series line-up. Later today, Galaxy Unpacked Part 2 will take place first. Nevertheless, many Galaxy fans are eagerly looking forward to early 2022, when the Samsung Galaxy S22 series is expected. Three models are being developed: a base model, a Galaxy S22 Plus and a new top model in the form of a Galaxy S22 Ultra.

Last week, LetsGoDigital made a series of Galaxy S22 Ultra renders with a 11-shape camera island. The product renders were based on information from the well-known leaker Ice Universe.

However, there have been some conflicting reports about how the camera of Samsung’s new top model will look like. Leaker OnLeaks claims the S22 Ultra will have a P-shaped camera system. Product renders have also been made of this S22 Ultra model, making the differences between the two models clearly visible. 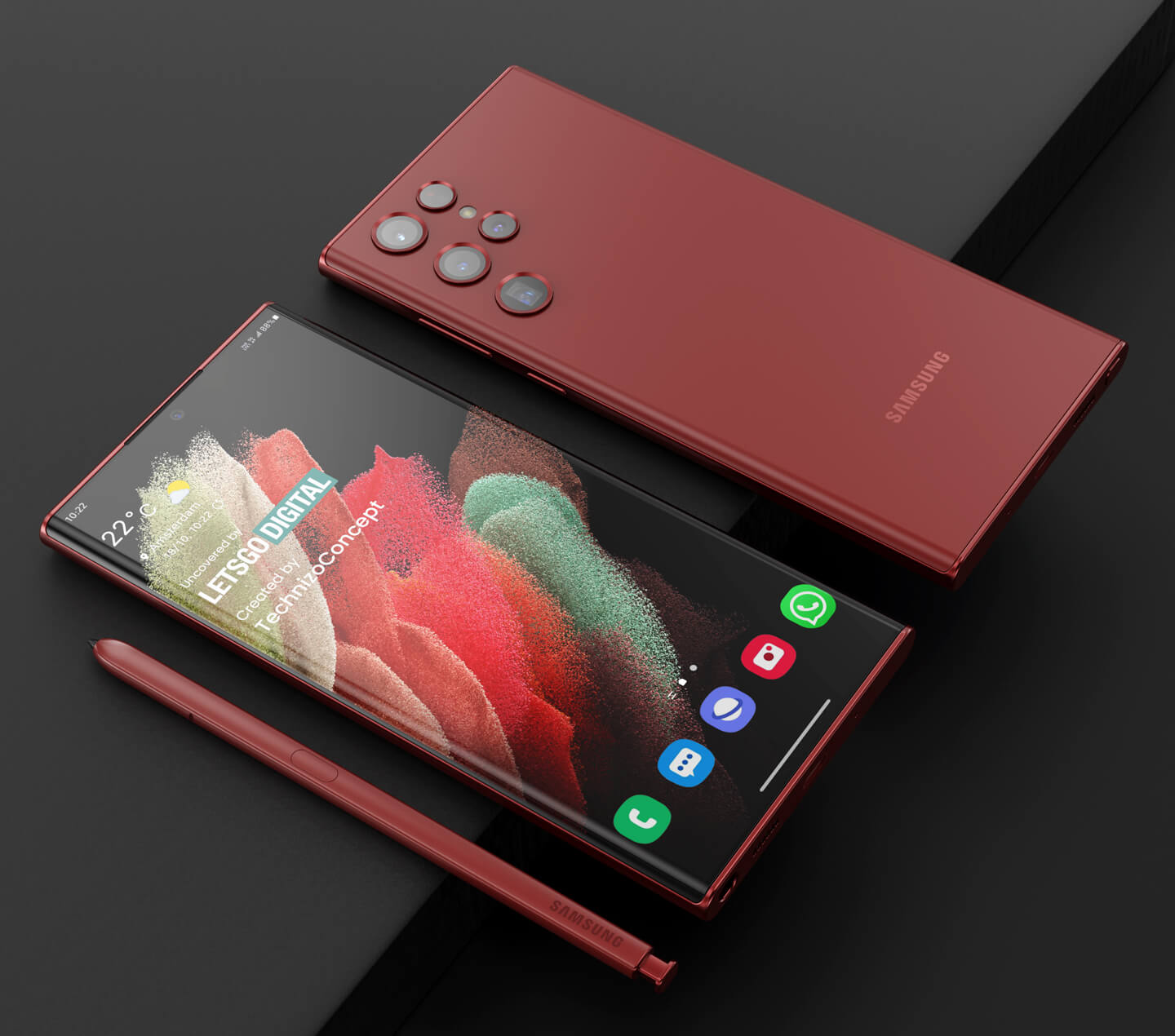 In the meantime, LetsGoDigital has been in contact with Super Roader. He is a former employee of the wireless division of Samsung Electronics South Korea and makes informative YouTube videos about Samsung products under the pseudonym ‘Super Roader’.

Super Roader says he is 100% convinced that the camera system will look different than is currently thought. As a result of the information that we have been handed over – which unfortunately we cannot elaborate on – LetsGoDigital had new Samsung Galaxy S22 Ultra renders made last weekend by the talented graphic designer Parvez Khan, aka Technizo Concept. The YouTube video below was also made in record time by Technizo Concept.

We have been told that Samsung will opt for a water drop design – without a camera island. Meaning, there will not be a P-shaped or 11-shaped camera island at all.

The South Korean manufacturer seems to want to equip the new top model with a similar camera design as is already used for cheaper smartphone models within the A series – think of the Galaxy A32, for example.

The cameras of the S22 Ultra will of course protrude further from the housing than is the case with cheap smartphones such as the A32. This is because phones like the A32 do not have a zoom lens. The new Ultra, on the other hand, will feature two telephoto cameras – with 3x and 10x optical zoom.

Samsung is not the only brand that applies this design. The LG Velvet was the first smartphone with a so-called water drop camera system. LG Electronics, however, stopped the production of smartphones earlier this year, so Samsung can still distinguish itself from the crowd with this design. 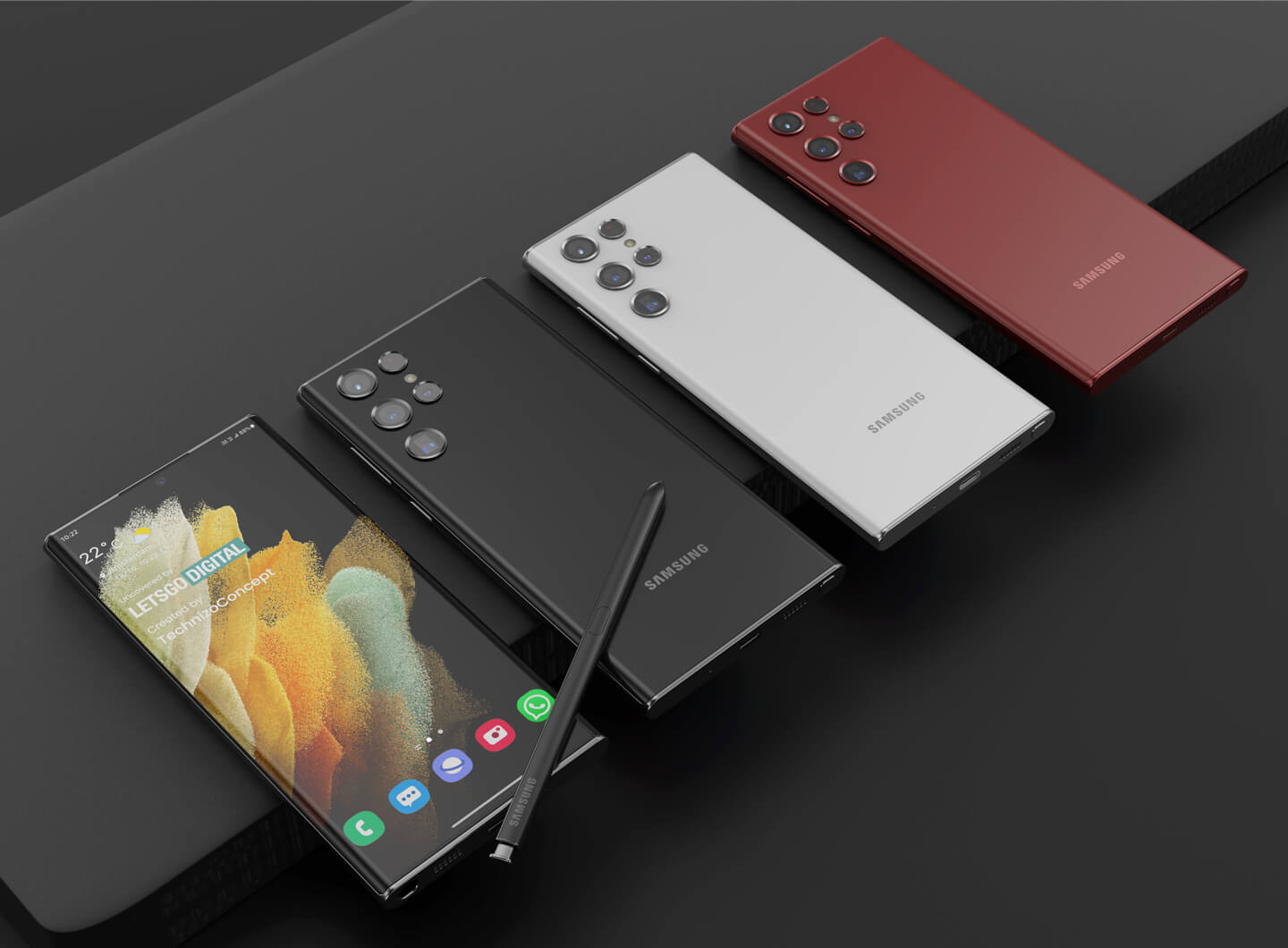 By choosing a water drop camera, weight can be saved. Samsung does not want to make the new top model heavier than the S21 Ultra, weighing 228 grams. The S Pen compartment and the stylus pen itself obviously provide extra weight. The South Korean manufacturer wants to compensate for this by integrating a camera system that is as light as possible.

In the YouTube video below, Super Roader talks extensively about the S22 Ultra. Of course the expected camera design is also discussed. The South Korean video can be viewed with subtitles. The subtitles are not completely flawless, but the message gets across.

Samsung seems to want to focus on the ‘Burgundy Red’ edition, which has a luxurious appearance. In addition, the Samsung S22 Ultra will be released in black and white.

Samsung Galaxy S22 Ultra will be the model name

Unfortunately, an SD card slot will be missing – as was the case with the Galaxy S21 series. However, this will be a setback for Galaxy Note users. After all, the Galaxy Note 20 Ultra did have a microSD slot. With the S22 Ultra it will not be possible to expand the memory by means of a memory card. However, several memory variants will be made available, so that there is something to choose from. 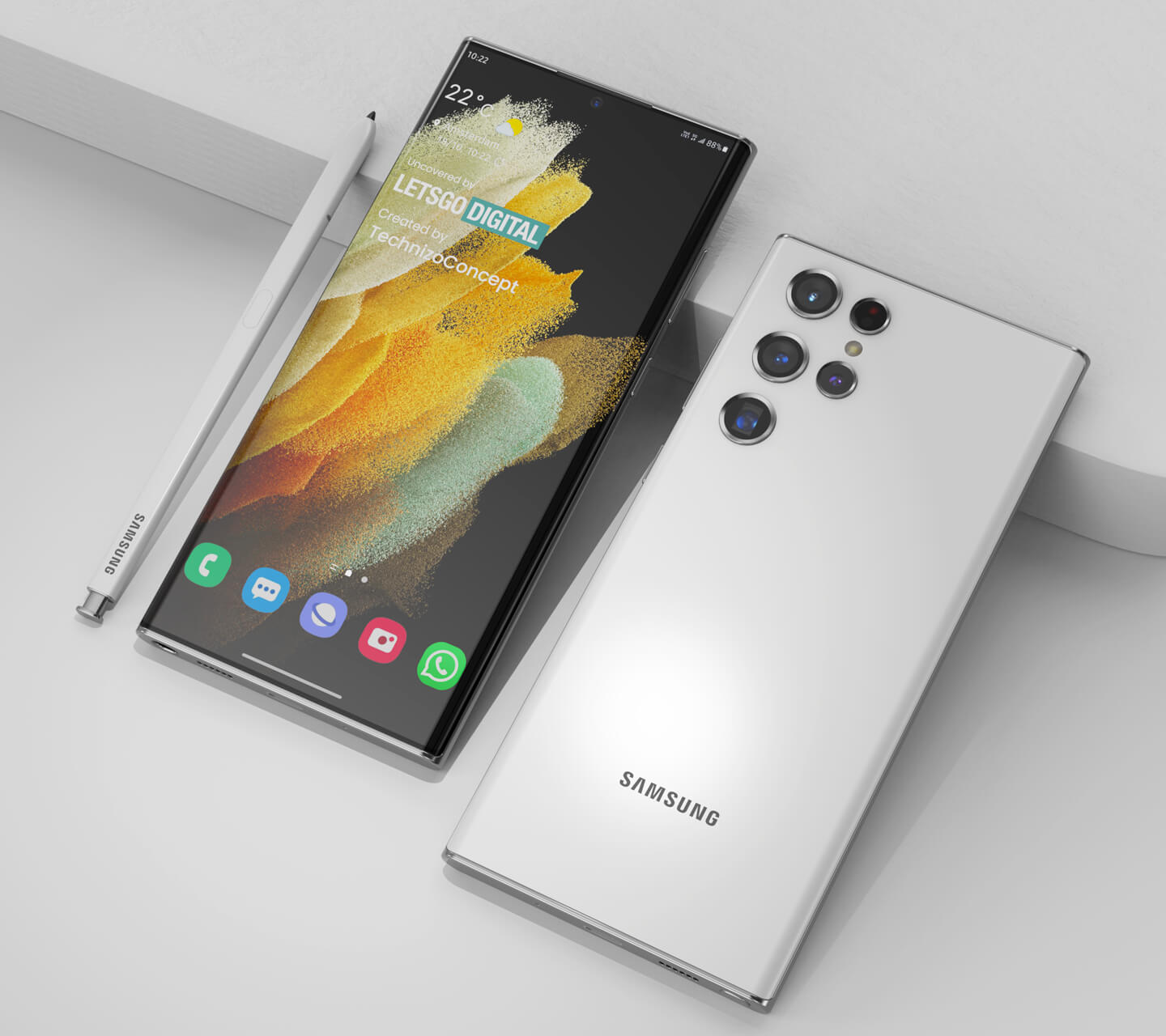 It is clear that the new Ultra model will have a different design compared to other S-series models. The top model gets straighter corners. Thus, the S22 Ultra will look more like a Galaxy Note smartphone than the S21 Ultra.

The new Ultra model will be equipped with a 6.8-inch curved display. The bezels are kept very minimal, allowing the user to benefit from a relatively large screen-to-body ratio. A 40MP punch-hole selfie camera is integrated at the top center.

The rear camera system will consist of a 108MP wide-angle camera, a 12MP ultra-wide camera and two 12MP telephoto cameras with 3x and 10x optical zoom. All four cameras will be equipped with an optical image stabilization system (OIS) to counteract motion blur. In addition, a laser autofocus lens will be integrated – which will be placed above the flash. 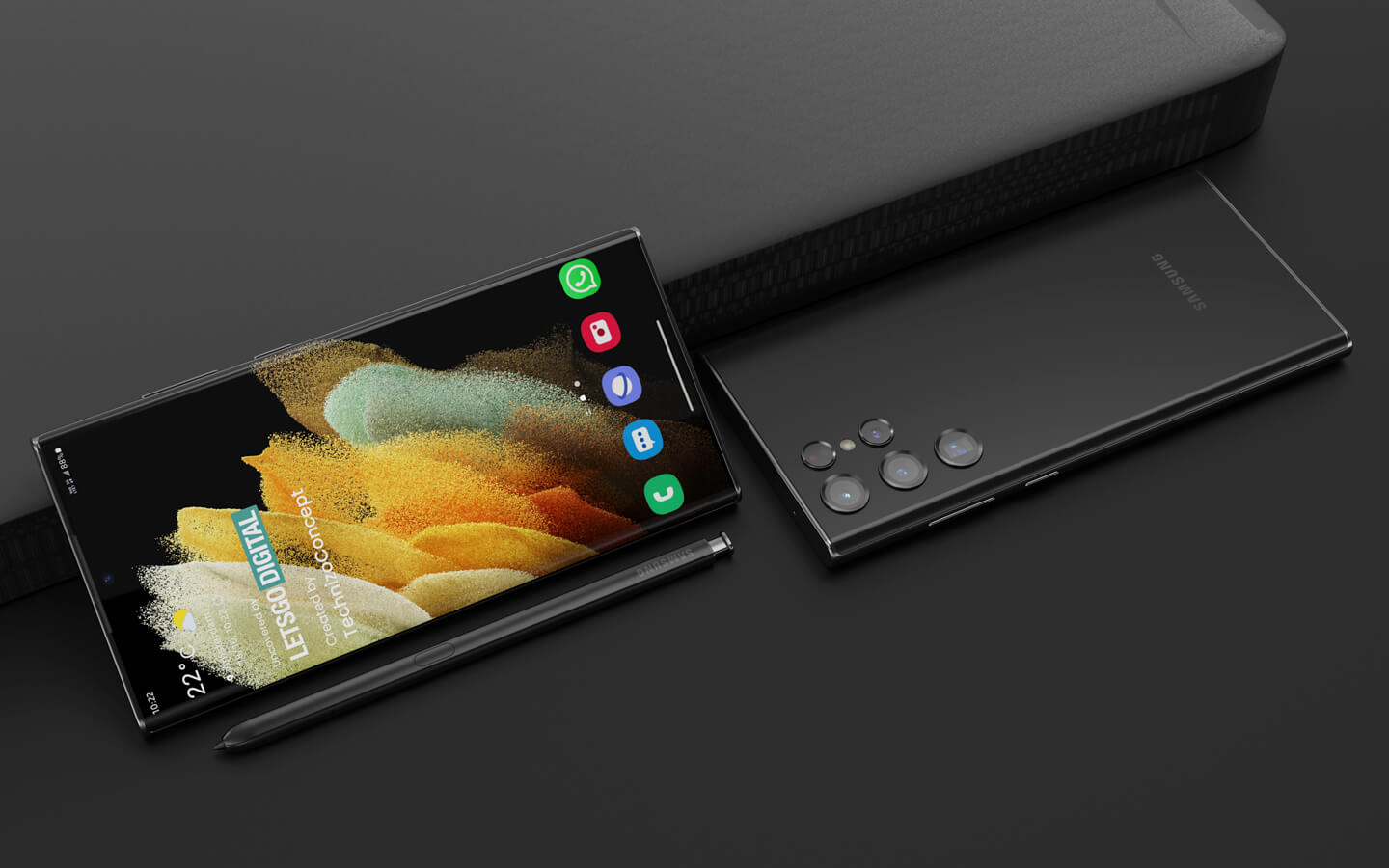 The smartphone will run on the new Android 12 operating system in combination with One UI 4. Samsung has already made a beta version of this user interface available, but it still seems to contain quite a few bugs. In the coming period, there will undoubtedly be a lot of hard work behind the scenes to be able to deliver a good software experience. We will probably hear more about One UI 4 later today during Galaxy Unpacked Part 2.

In Europe, the new S-series smartphones will be powered by the Samsung Exynos 2200 with AMD RDNA 2 GPU. Other details about this not yet officially announced SoC were shared via Twitter by Ice Universe last month. The Qualcomm Snapdragon 898 will most likely be used outside of Europe.

The new Ultra model is expected to come with a 5,000 mAh battery that will support 45W fast charging. However, a charger will not be included as standard. Samsung has already started this trend with the S21 series. 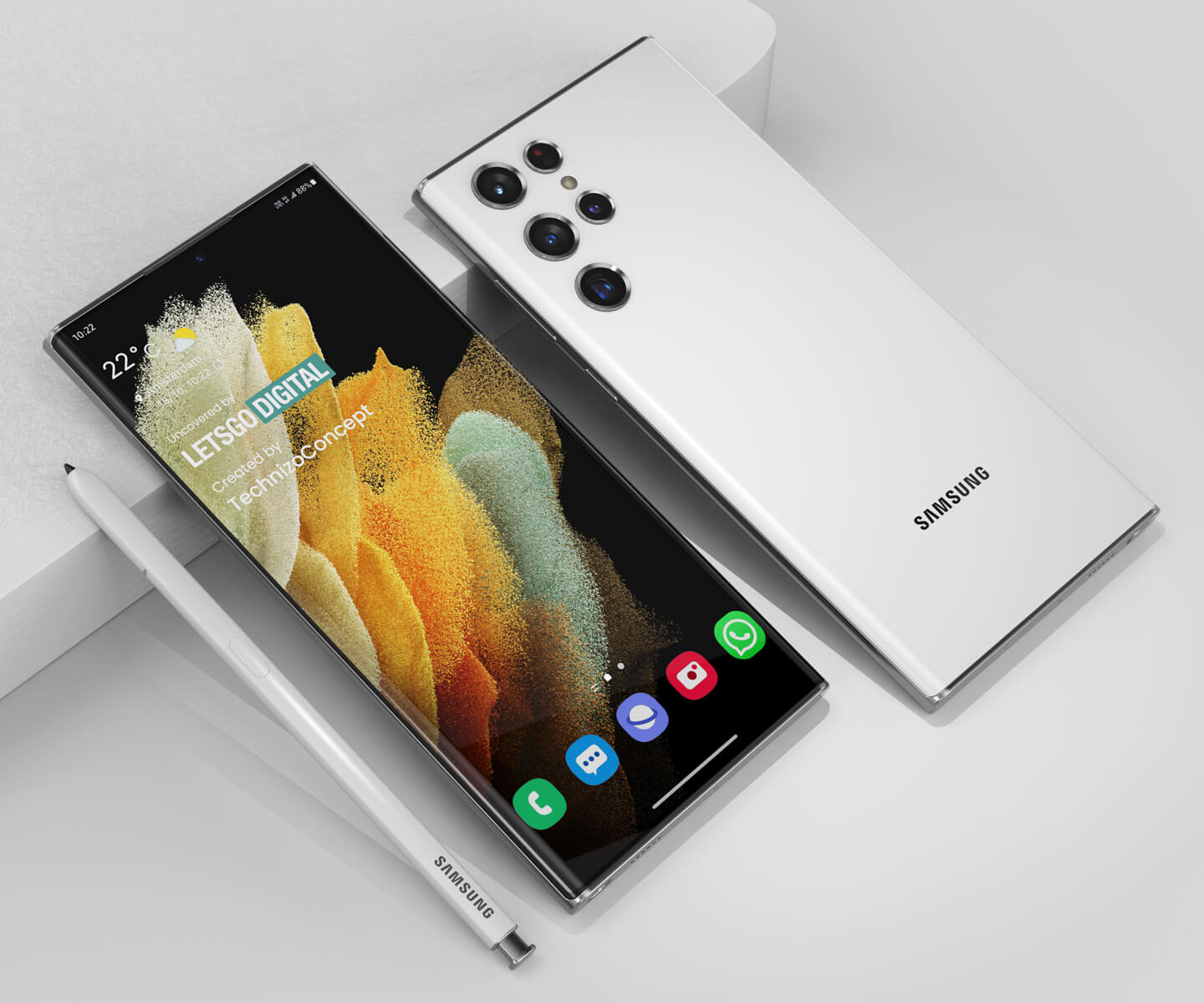 When can you buy the Galaxy S22?

Samsung seems to choose to announce the Galaxy S22 in February. The month of January will be reserved for the highly anticipated Galaxy S21 Fan Edition. Though some believe that this smartphone will be announced later today during Galaxy Unpacked Part 2.

Whether the S22 will be announced in January or February, it’s likely that the new models will be showcased at MWC 2022 – as is the case every year. The well-known telecom fair will start on February 28, 2022 in Barcelona, ​​Spain.

No information is known about the price at the moment. If we are to believe the rumors, Samsung wants to focus extra on the basic model this time. This may mean that the Ultra model will increase in price again. After all, this time the device will be equipped with an S Pen compartment. The S Pen will likely be included as standard – which is not the case with the S21 Ultra.

The current Ultra model was put on the market for €1,250 (128GB). We hope Samsung will increase the minimum memory capacity to 256GB. As we find 128GB to be the very minimal for a mobile phone that costs more than €1,000 and does not have an SD memory card slot either. However, Samsung may opt for a 128GB base model to create a lower starting price. More details about Samsung’s new S-series line-up will undoubtedly be revealed in the coming weeks. 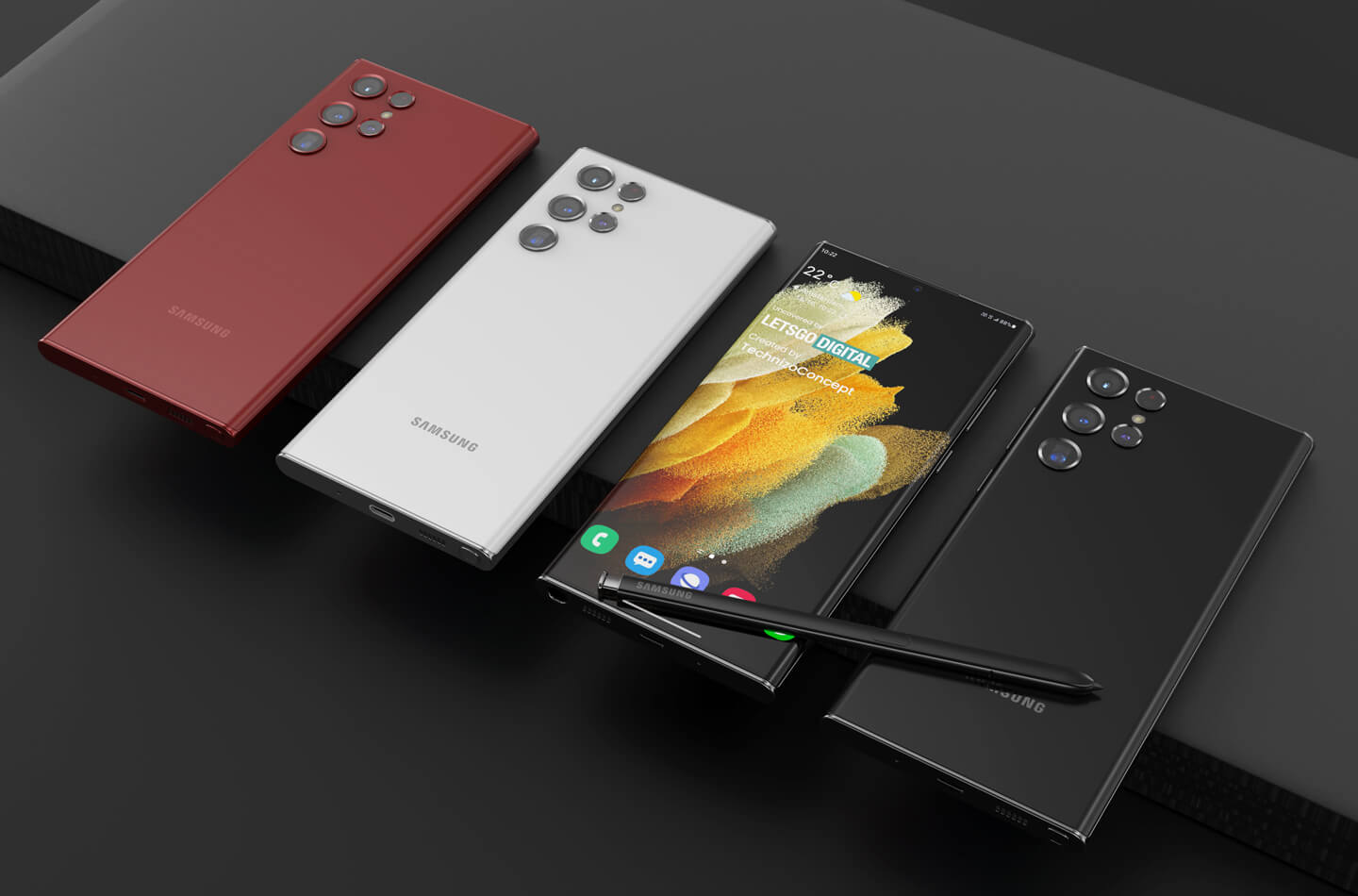 Note to publishers :  The Samsung Galaxy S22 Ultra product renders presented in this article are created by Parvez Khan, aka Technizo Concept, in collaboration with LetsGoDigital. The 3D renders are based on rumors and meant for illustrative purposes only. This product is not (yet) for sale. You can use the copyrighted images for your own website, YouTube and/or social media channels, please be so respectful to include a clickable source link into your publication.