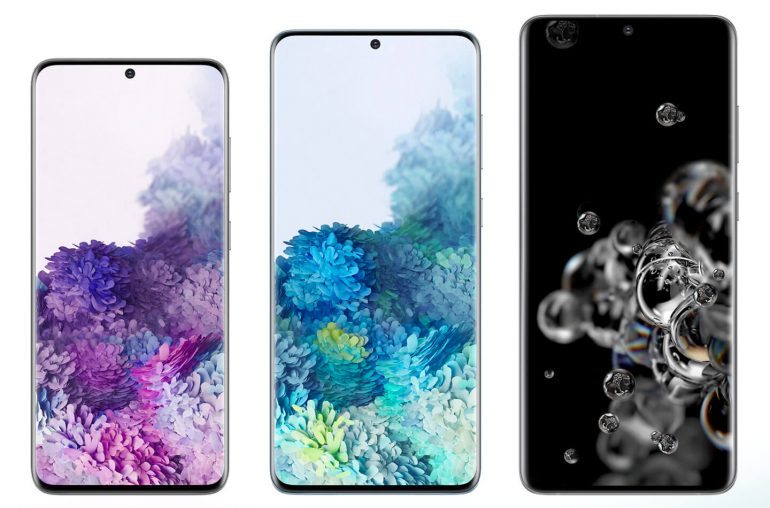 Samsung will officially reveal three new high-end devices in two weeks’ time but all the specs and design are already out: Galaxy S20, S20+ and S20 Ultra.

Exciting times for mobile fans all over the world as the Mobile World Congress is approaching. Less than a month until the event in Barcelona starts with many big reveals scheduled for 24 February but a particular one will arrive even sooner. Samsung will hold its own event two weeks earlier and we expect the new flagship S devices to be introduced along with the foldable Galaxy Z Flip. What to expect from the Galaxy Unpacked event on the 11th of February and are we in for any surprises? Read further to find out! 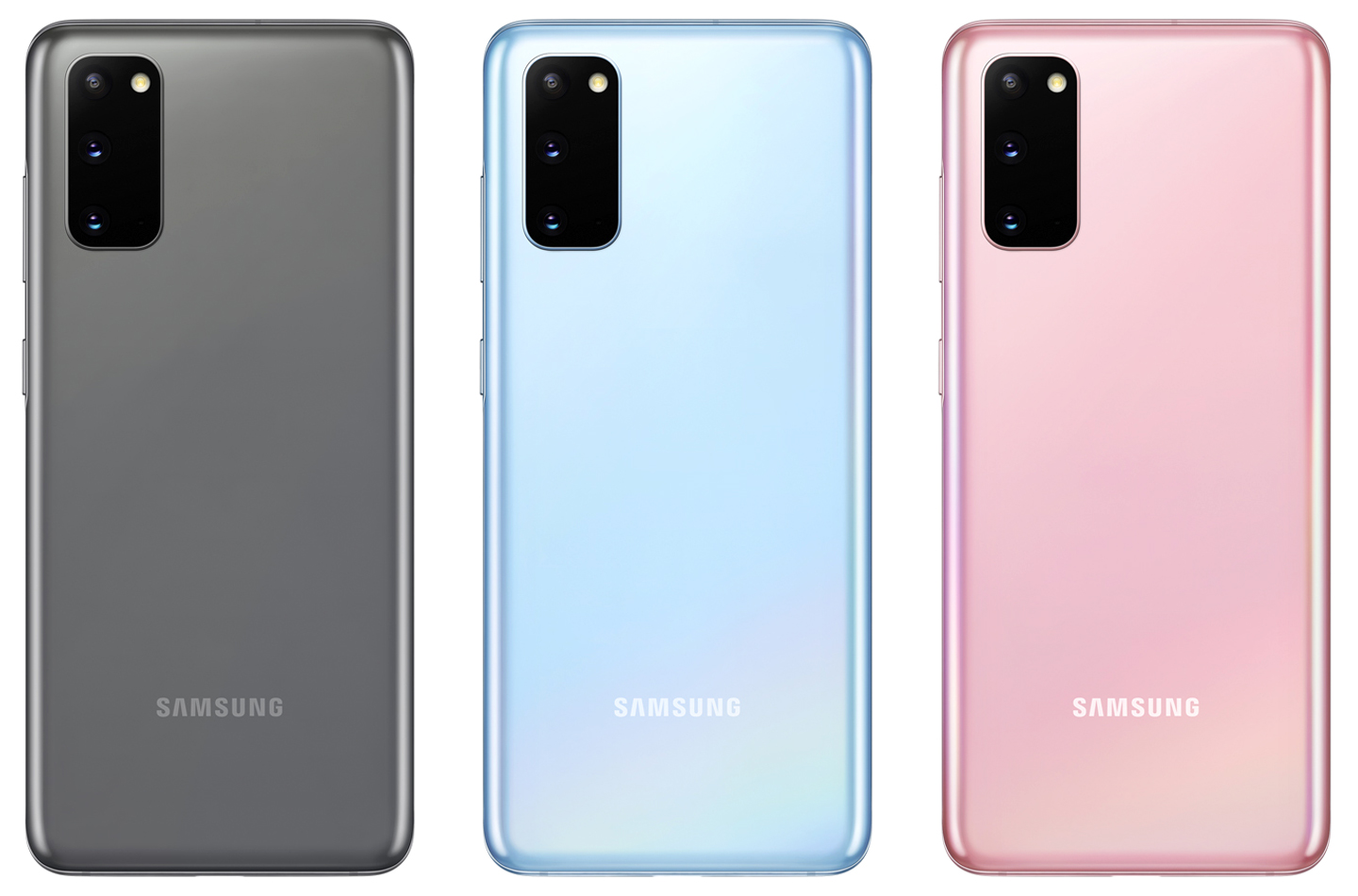 As we’ve reported several times now, Samsung will make a small adjustment to the labeling of the S devices. Instead of continuing with S11, the company leaps directly to S20, to tie its line up with the current year of 2020. There will be a total of three devices in the S range: the Galaxy S20, S20+, and S20 Ultra. There won’t be a smaller and cheaper S20e this year but instead, we’re getting another upper echelon contender – the Ultra.

As the official announcement draws near, almost all of the specs and design of the new flagships are out in the wild but that’s something we’re really accustomed to with Samsung. Thanks to WinFuture and Evan Blass, a series of official images of all three devices have been leaked and we get an idea about color schemes as well. The Galaxy S20 is shown in three colors; Cosmic Gray (gray), Cloud Blue (light blue) and Cloud Pink (light pink), while the S20 Plus and the S20 Ultra are both getting Cosmic Gray (gray) and Cosmic Black (black). The S20 Plus will be available in Cloud Blue as well.

All the devices will be powered by the 7nm Exynos 990 chipset or Snapdragon 865 (depending on the region) and run on the Android 10 with One UI 2.0 on top. There will be a 5G options for each model except the Ultra, which will get only a 5G version. The base storage options will probably start at 128GB but let’s get all the specs model by model. 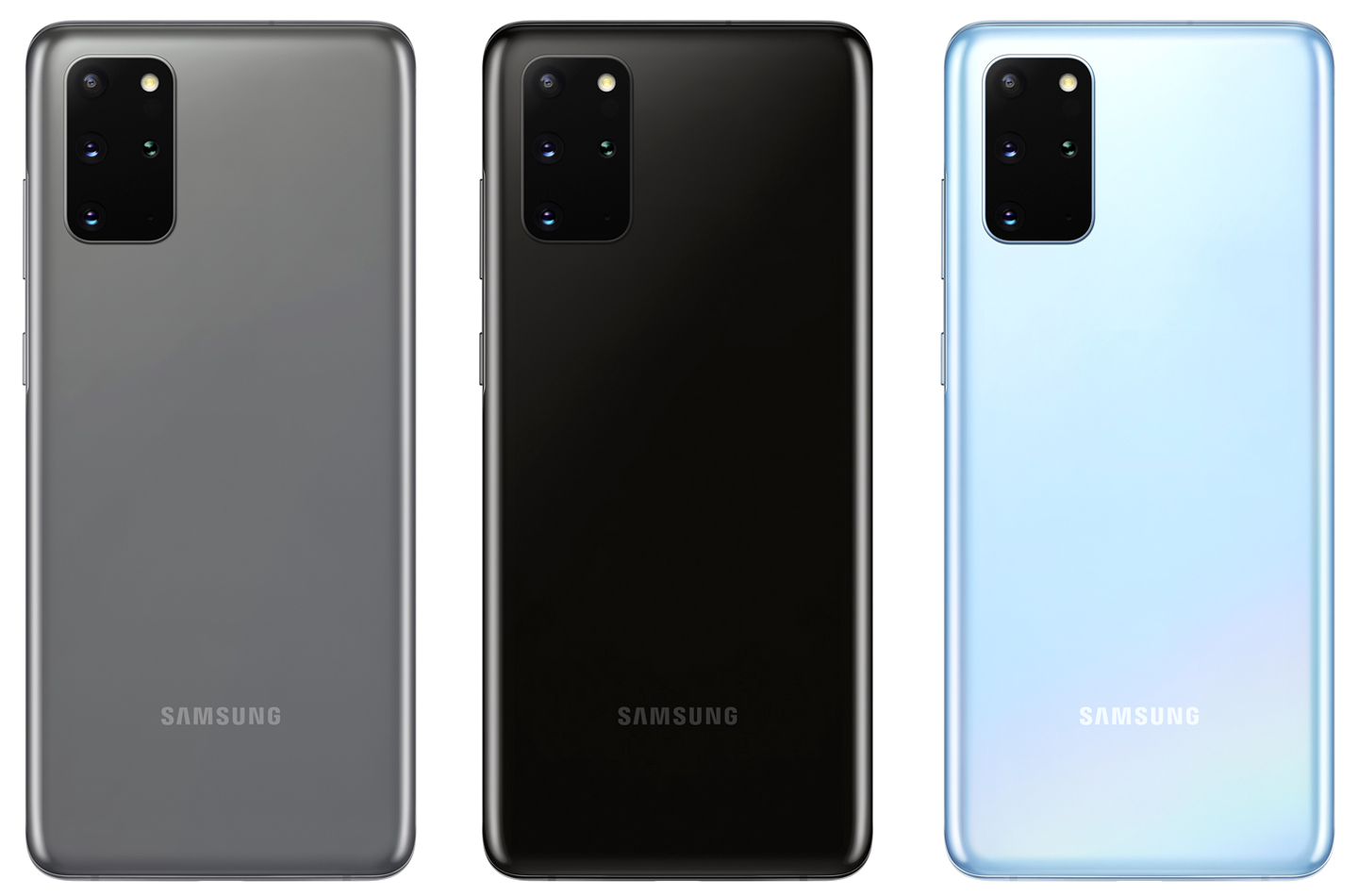 The Samsung Galaxy S20 is the entry-level model – this year we’re not getting an affordable “e” version. It will sport a 6.2″ WQHD+ screen with an aspect ratio of 20:9. It is an Infinity-O Dynamic AMOLED display with a 120Hz refresh rate. Samsung’s version of the notch called the “Punch-hole” will feature a 10-megapixel selfie camera with 4K, 60fps video capabilities.

On the back, there’s a triple-camera system, consisting of a 12-megapixel wide-angle camera, 12-megapixel ultra-wide-angle and a 64-megapixel telephoto snapper with 3x optical and 30x digital zoom. This setup allows for 8K video recording with the modest frame rate of 30fps. The battery capacity will be increased, this ‘budget’ model in the S-series will get a 4,000 mAh battery. The IP68 water and dust protection is present in all models and we even got some dimensions for each phone. Galaxy S20 is 152x68x7.9mm in size and weighs 164 grams.

The S20+ will have a considerably larger display at 6.7-inches with the same WQHD+ resolution and speedy 120Hz refresh rate. The rear camera system will be very similar to the standard model but with the additional 3D ToF (Time-of-Flight) sensor. It will please portrait bokeh-effect fans and will prove useful for all AR (Augmented Reality) applications and purposes. 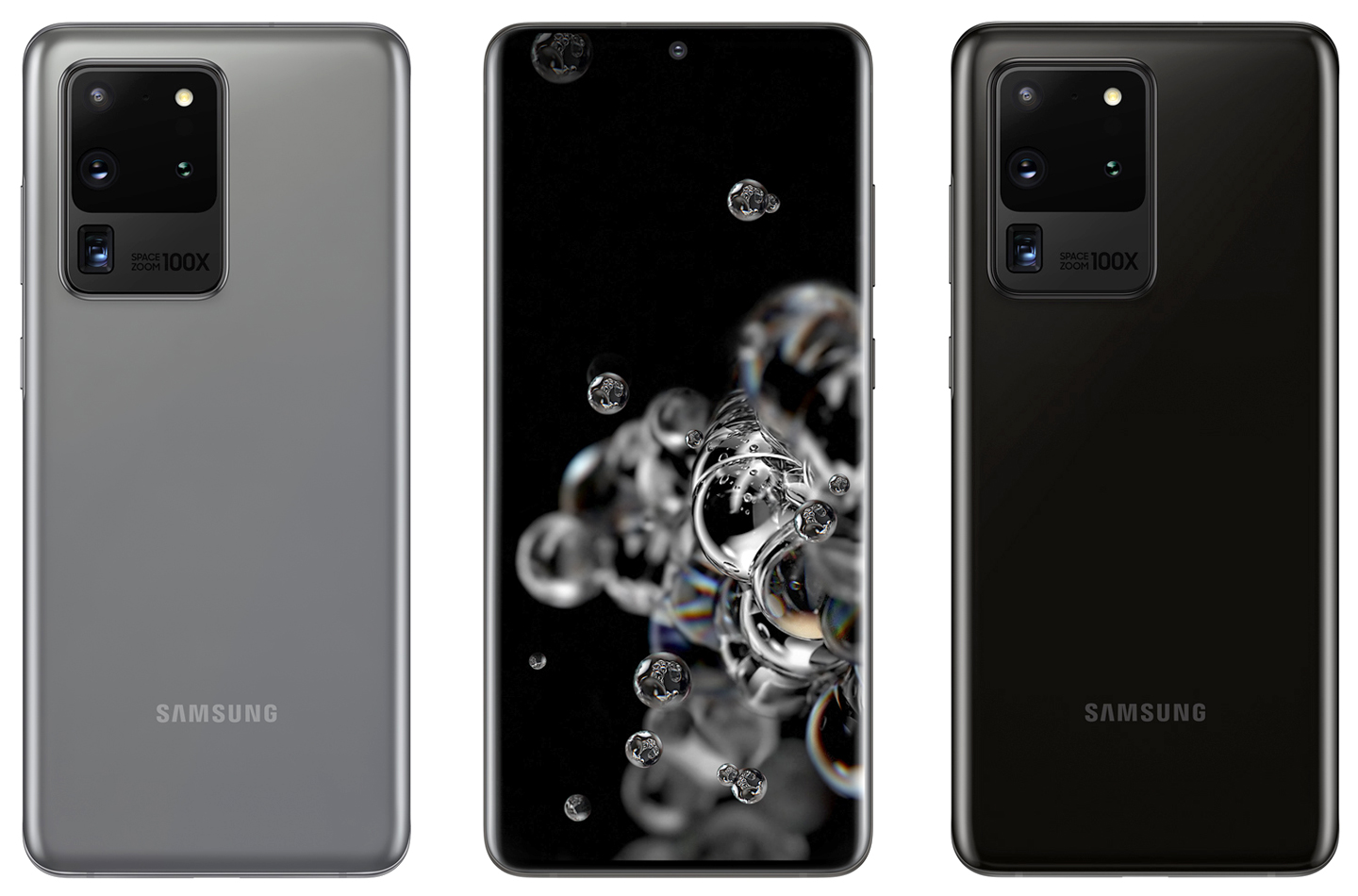 Samsung is trying the ultra-premium segment this year with the appropriately named device. The S20 Ultra will not only be the most powerful, but also the largest in the Galaxy S range. With its 6.9-inch WQHD+ screen the phone definitely won’t favor the small-handed but we’re already used with large devices and no-longer call them “phablets” even. This bigger screen will also tick at 120Hz and there will be a Punch-hole camera too but with an impressive pixel count – 40 megapixels.

The upgrades extend to the main camera system on the back – the Galaxy S20 Ultra will be the first Samsung phone with 10x optical and 100x digital zoom, courtesy of the combined power of a 108-megapixel wide-angle camera, 48-megapixel telephoto camera, and a 12-megapixel ultra-wide-angle camera. The ToF sensor finds a place among these big boys too. In addition, Samsung recently filed a trademark for Super ISO, suggesting the ISO light sensitivity range will get an upgrade too. The camera will also make use of nonacell technology, to merge 9 pixels into 1 for better low-light photography.

The Samsung Galaxy S20 Ultra will sport the largest battery in any S-device up to now with 5000 mAh capacity. Considering the display size and the refresh rate, this capacity should provide adequate autonomy. The phone weighs a hefty 221 grams and measures 167×76.8 × 8.8 mm. 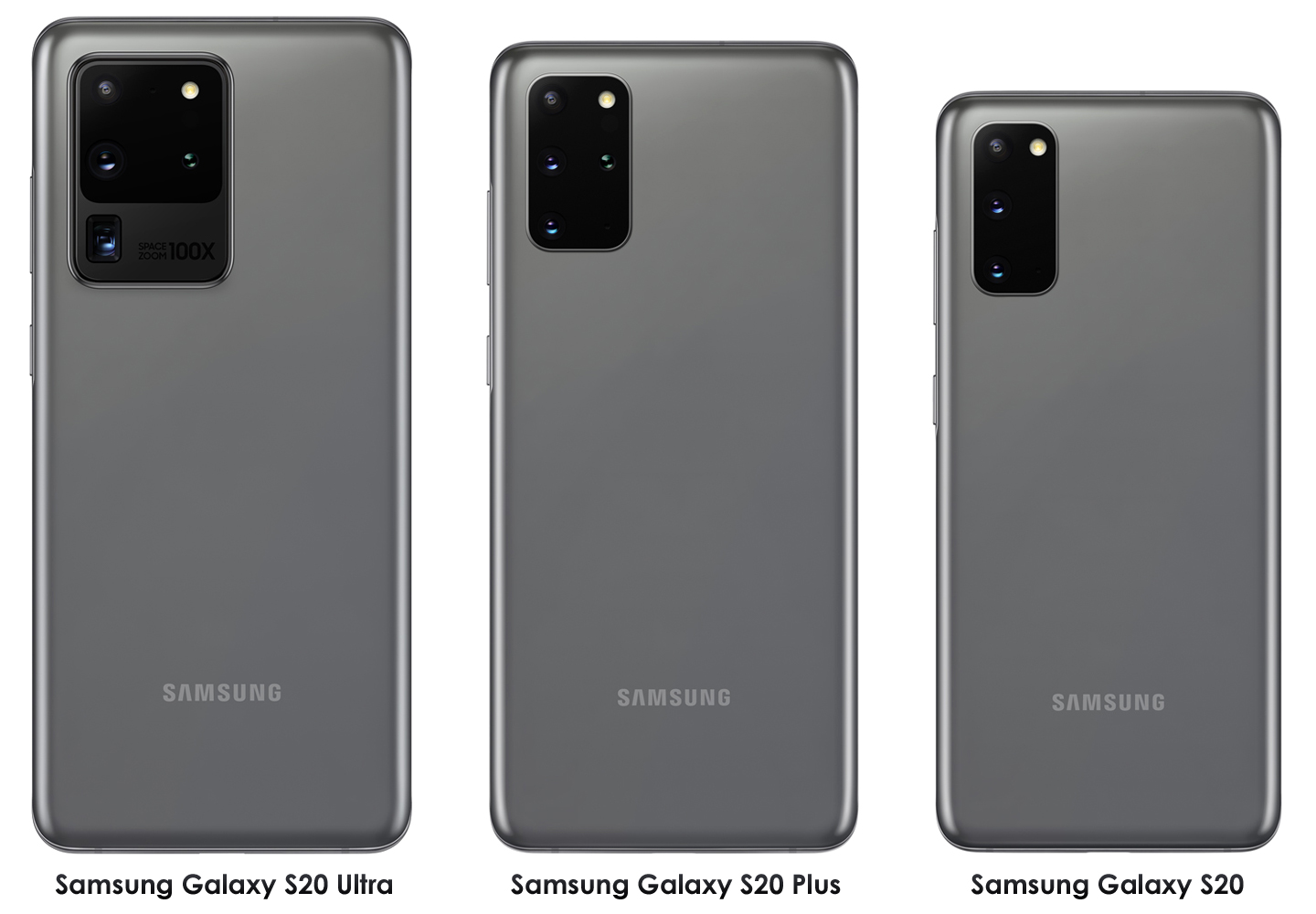 There were some fluctuations in the expected prices for these devices but the most recent information puts the Galaxy S20 at the $850 (€900 in Europe)  starting point – in line with the last year’s S10 price at launch. 5G connectivity will cost an additional $100 and if all this turns out legit, then Samsung has done a good job pricing the device competitively.

The Galaxy Unpacked event will take place in San Francisco on 11 February 2020 and preorders will probably start immediately after the official unveiling. The phones will hit stores a week or two later and all the preorders will get a pair of Galaxy Buds as a bonus.