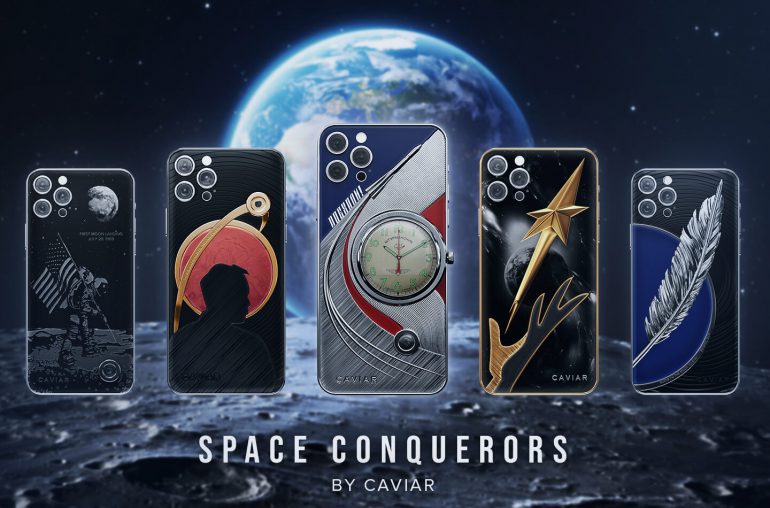 Caviar launches 5 Limited Edition models of the iPhone 12 Pro (Max) dedicated to space conquerors. Each features a real fragment of a famous spacecraft.

Today it is exactly 60 years ago that the first manned space flight took place. This memorable day has been renamed the Day of the Cosmonauts. In honor of this special event, the Russian accessory company Caviar has introduced a range of smartphones within the “Space Conquerors” Collection. It are five iPhone 12 Pro (Max) models, each dedicated to a famous personality within the space industry.

These exclusive and luxurious smartphones are certainly not for everyone’s budget. This is partly because Caviar has provided every phone model within the Space Conquerors Collection with a real fragment of the hulls of famous spaceships. That makes these models very unique, but also expensive.

The first model is dedicated to a modern aerospace pioneer; Elon Musk. The Tesla founder has a dream to conquer Mars, with his SpaceX development program. The iPhone 12 Pro (Max) Musk edition is made of ultra-strong titanium with a PVD coating. The device is adorned with the recognizable silhouette of Elon Musk, which is depicted against the red-gilded background of the planet Mars.

A gilded line around the red planet symbolizes the upcoming flight – the dream of the legendary visionary. The flight path is crowned with a real space particle, which has been on board of the CRS-14 Falcon 9 and the CRS-17 Dragon – both spacecraft are made by SpaceX.

The date engraved on the gold line is the date SpaceX was founded. In 2021, the company will be celebrating its 19 anniversary, therefore Caviar has decided to manufacture only 19 copies of the iPhone 12 Pro Space Conqueror Musk Edition.

On April 12, 1961, the first manned flight to space took place, on board of the Vostok 1 was astronaut Yuri Gagarin. In honor of this important event, jewelry brand Caviar has designed the iPhone 12 Pro (Max) Gagerin Edition. The case of the Gagarin model is made of hardened aeronautical titanium and composite stone, decorated with a three-dimensional image of the Vostok rocket, which put Gagarin in orbit.

The centerpiece of the design is a rare Navigator watch, engraved with the date of the first flight into space. On an identical watch, Yuri Gagarin counted his cosmic 108 minutes, which turned the world upside down and immortalized his name and achievement.

The most unique design element of the Gagarin model is a real fragment of the Vostok 1 spacecraft – which made the first flight around Earth. The Gagarin model has become one of the most exclusive models in Caviar’s history – only 12 smartphones will be produced, in honor of the memorable date of April 12.

This is the most expensive model of the Space Conquerors collection. The iPhone 12 Pro Gagarin edition is available for a starting price of $ 8,920 USD. For the iPhone 12 Pro Max, the price is set at $ 9,450 USD. 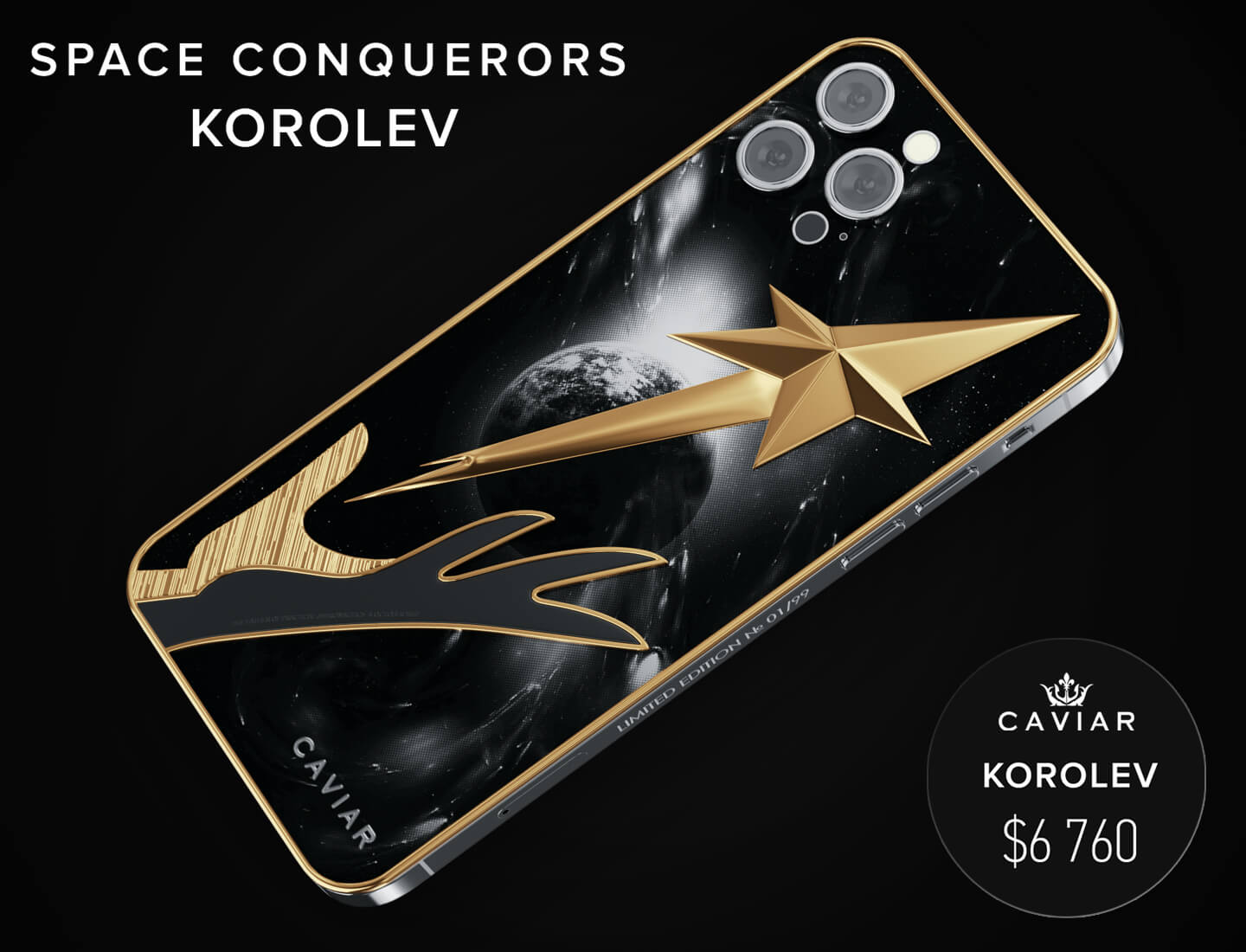 Caviar has also created an iPhone dedicated to the Ukrainian Soviet physicist Sergei Pavlovich Korolev, also known as the father of the Soviet space program. This smartphone model is adorned with a three-dimensional gold-plated star, bears the name of the Soviet engineer and creator of the first artificial Earth satellite, Sputnik 1.

A striking design detail is the enormous star thrown into space by a human hand. It is a symbol of the global event. It is a metaphorical representation of how Korolev and the Soviet Union take the first steps towards cosmic infinity.

The body of the smartphone is made of hardened titanium with an artistic engraving of a monochrome space landscape. Double coating of 999 gold made in Double Electroplated technique, 7 microns was used in the decor. There is an engraving on the case, containing the date of the launch of the first satellite. It says: ‘The father of practical astronautics, 4 October 1957’. 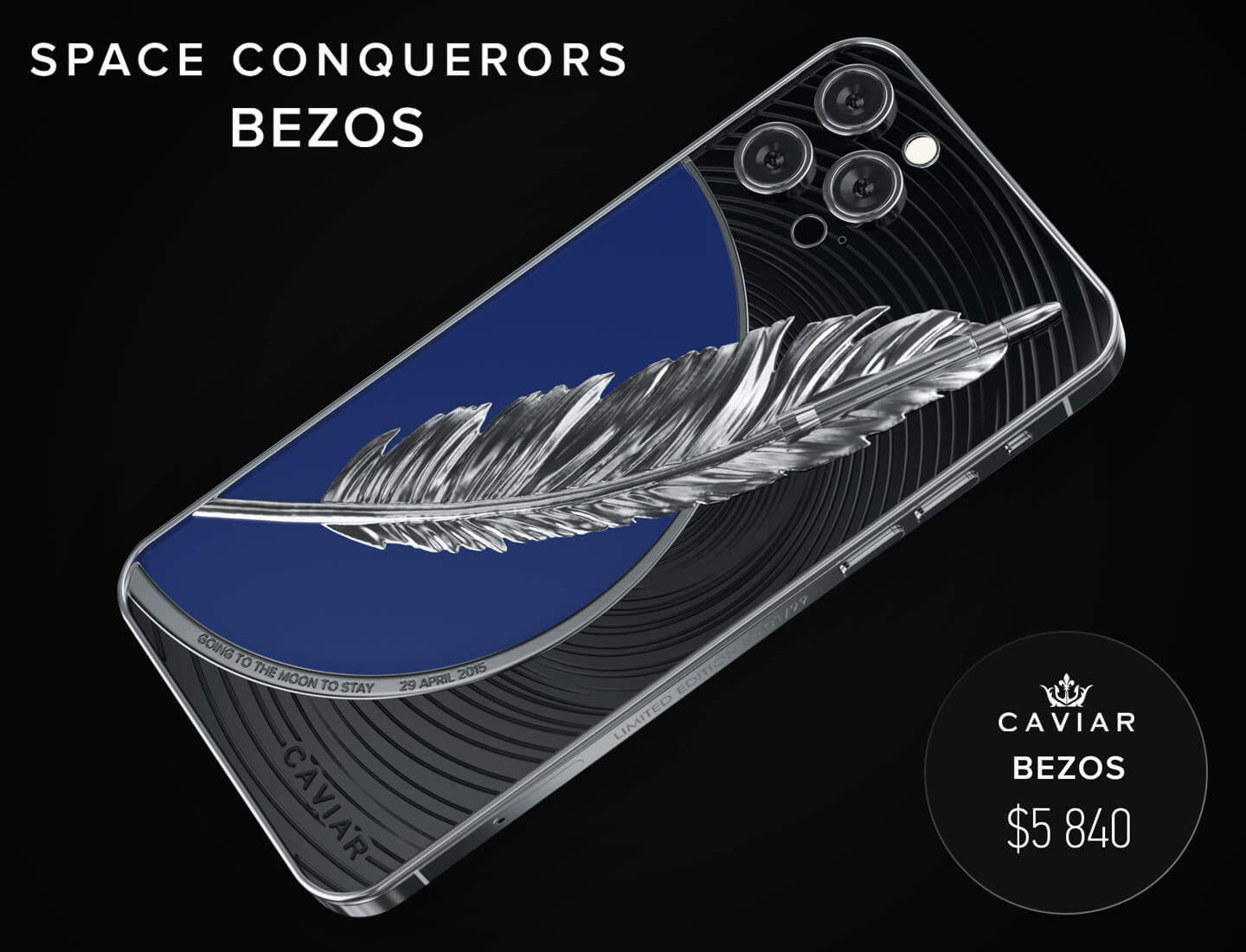 The fourth model in Caviar’s Space Conquerors collection is dedicated to American space pioneer Jeff Bezos and his space company Blue Origin. His mission is to bring people to the Moon. The Moon seems so close that you can reach out and touch, but the 384,467 kilometers that separate us is a serious test for experienced astronauts.

The body of the smartphone is adorned with an exquisite lightweight feather, which is the symbol of Blue Origin. It is depicted on all the spaceships born of the engineering thought of the best designers of Bezos. In the background, a deep blue composite stone has been incorporated, symbolizing the earth.

Our planet stands out in the endless space, which is designed in black PVD titanium with geometric relief patterns. The memorable date is engraved on the contour of the Earth: “Going to the Moon to stay, April 29, 2015” – referring to the date of the successful test of the reusable triple spacecraft New Shepard.

Last but not least, Caviar has dedicated a phone model to the first man to set foot on the Moon: Neil Armstrong. The American astronaut and aeronautical engineer, along with colleagues Buzz Aldrin and Michael Collins, reached the Moon in 1969 on board of the Apollo 11 spacecraft. During his descent on the ladder, Armstrong made the legendary statement: “That’s one small step for man, one giant leap for mankind.”

This iPhone 12 Pro Limited Edition includes a relief image of titanium featuring astronaut Armstrong placing the American flag on the Moon. In the background you can see a cosmic landscape, consisting of stars and planet Earth.

What makes this model extra special, Caviar has incorporated a real fragment of Apollo 11 into the design – the spacecraft that brought the first human to the moon. A commemorative engraving has also been added that reads: “First moon landing. July 20, 1969”.

It is not the first time that Caviar has designed an exclusive smartphone line-up dedicated to space. Last year, the iPhone 11 Pro Space Odyssey Collection was launched. Not long after, the company also released an iPhone 12 Pro Concept dedicated to Elon Musk and his SpaceX project.