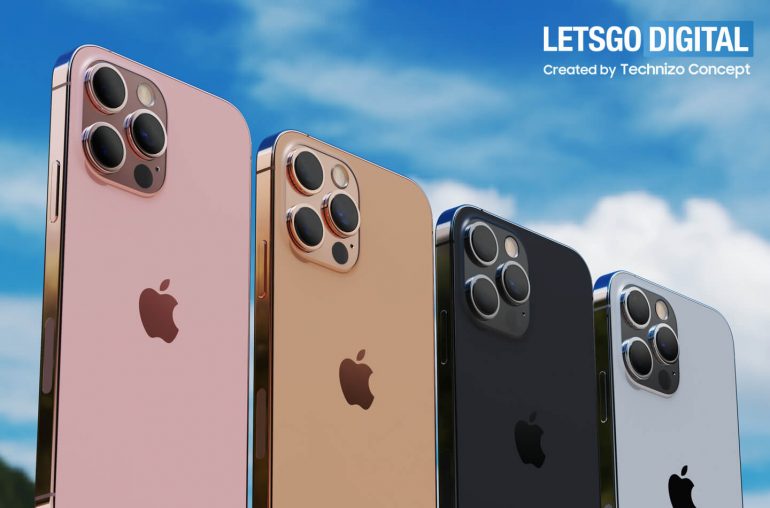 In a month from now, Apple will introduce the iPhone 12s Series. Read all about the expected new features, the design, the price and the release date.

The second half of 2021 has begun. The Google Pixel 6 series has now been officially introduced and the Samsung Galaxy Unpacked event has already taken place. Time to look ahead to September, when Apple will launch its new smartphone models. The iPhone 12 series will most likely be succeeded by the iPhone 12s series – although some believe it will be the iPhone 13 series. Four models are expected again, in addition to a mini version and a basic variant, two advanced Pro models will be announced.

It seems Apple wants to reduce the differences between the Pro and Pro Max. The iPhone 12s Pro will have a smaller display than the iPhone 12s Pro Max, but in terms of camera, the two models will probably no longer be inferior to each other.

As time goes on, more and more becomes known about Apple’s new flagship products. This has inspired graphic designer Technizo Concept to bring the expected iPhone 12s Pro to life in a new series of product renders. The talented 3D designer has also made the video below, in which the new Apple phone is shown from all sides. 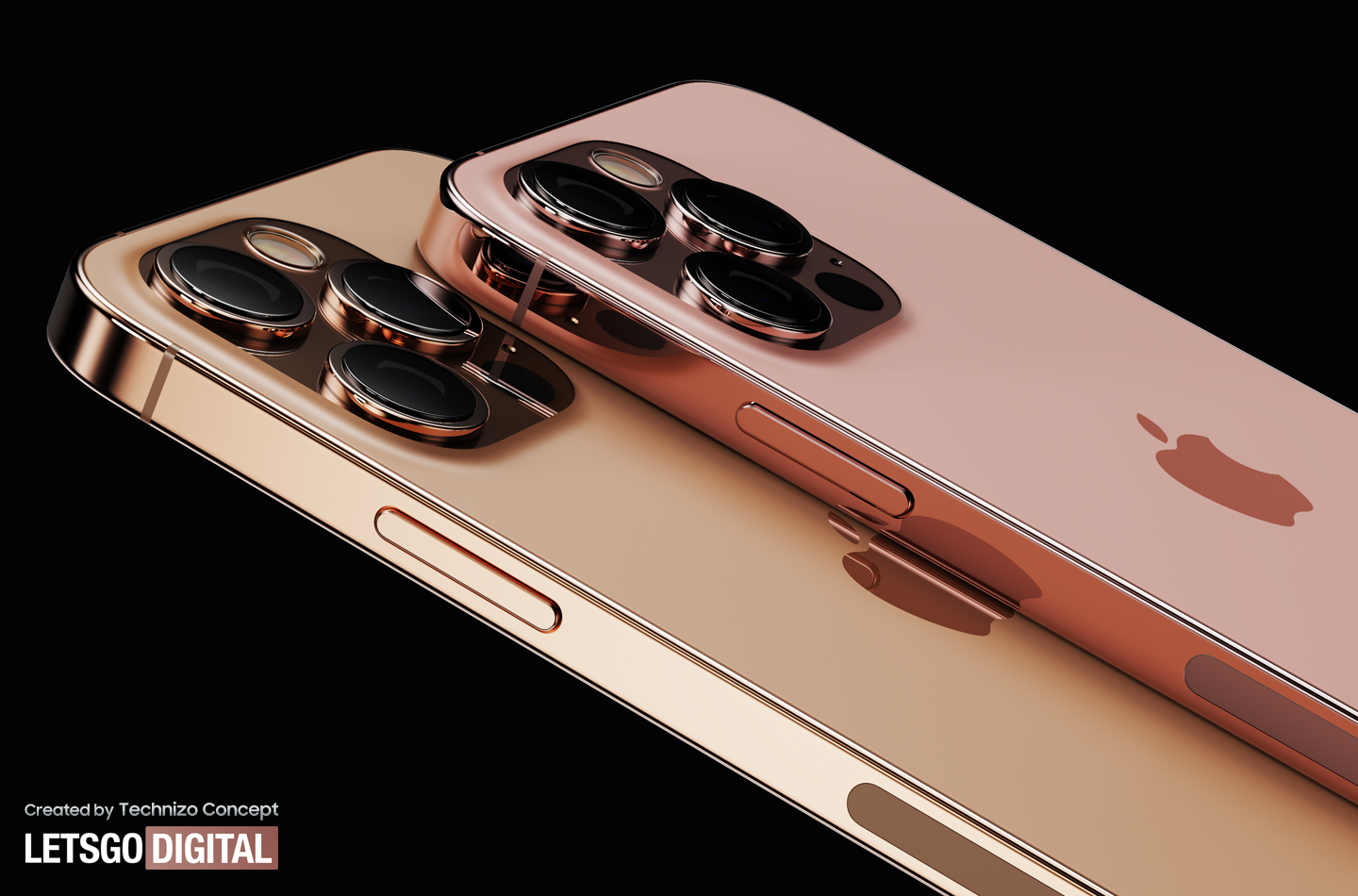 The successor to the iPhone 12 Pro will be renewed and improved on several points. The display sizes remain unchanged from last year. The iPhone 12s mini will be equipped with a 5.4-inch display. The standard model and the iPhone 12s Pro will both feature a 6.1-inch screen and the top model will have a 6.7-inch display.

New is the 120 Hertz refresh rate. Thanks to this high refresh rate of the screen moving images will look much smoother. A high refresh rate also ensures more operating comfort while scrolling. Both Pro models get an LTPO screen with an adaptive 120Hz refresh rate – in other words, the refresh rate will be automatically adjusted according to the app in use, in order to save on energy consumption. This technology was previously applied by Apple to the iPad Pro.

Apple seems to want to add another new screen function, the iPhone 12s Pro will probably be equipped with an Always-On display for the first time. This way, general information, such as the time and battery indicator, remains visible even when the screen is off. A disadvantage is, this functionality demands a lot from the battery.

The design will remain largely unchanged. Last year, Apple chose to provide the new models with flat edges. We also expect to see this distinctive design in the new 2021 models.

Since the home button was removed on the iPhone X, no new Apple smartphone (apart from the iPhone SE 2020) has appeared with a fingerprint sensor. Instead, Apple has focused on its advanced 3D Face ID technology. In the past year, however, we have had to wear a face mask en masse, with facial recognition technology not being the most convenient method to unlock your phone.

Fortunately, this seems to be changing with the new models. The iPhone 12 s Pro will reportedly get a Touch ID sensor that is processed under the screen – as we have known for years from many Android devices. The 3D facial recognition technology will continue to exist, users will simply have an additional biometric authentication method at their disposal. 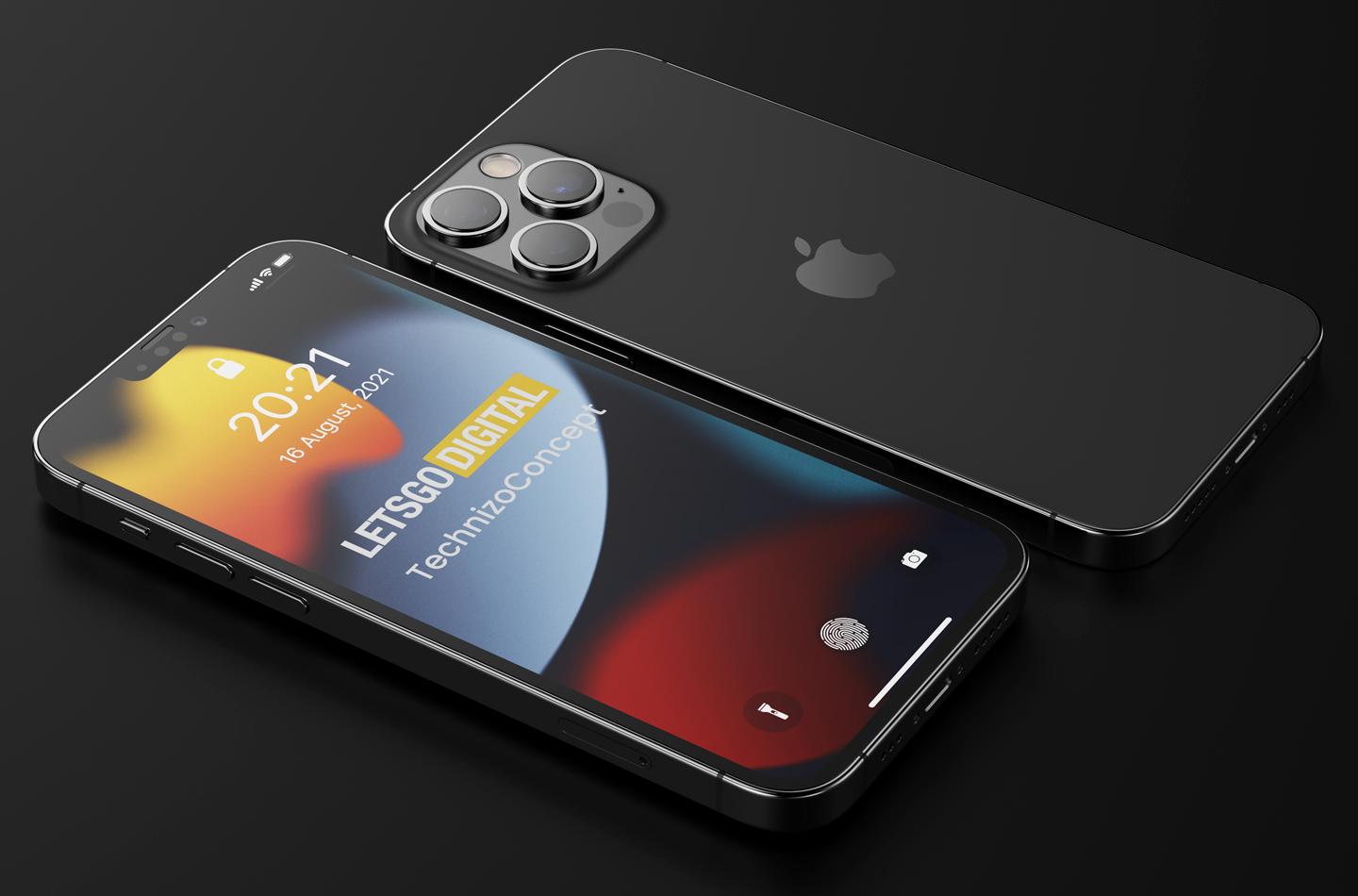 Since the iPhone X was released in 2017, the notch has been one of the most talked subjects of the new models. The black notch at the top of the screen holds the TrueDepth 3D camera. Although many other smartphone manufacturers have switched to a punch-hole camera system in the meantime, Apple still sticks to the notch. Also this year, the notch plays a role in the reporting about the expected devices. Apple seems to be planning to reduce the notch by about 25% with the iPhone 12s Pro (Max). The 3D renders of Technizo Concept clearly show what this reduced notch will look like.

A completely notch-free Apple phone doesn’t seem far off, though. Possibly, the iPhone 14 Pro (Max) will come with a full screen design – with the selfie camera placed under the screen.

Several Android manufacturers have now introduced their first smartphone with an under-panel camera, including the ZTE Axon 30, the Xiaomi Mi Mix 4 and the Samsung Galaxy Z Fold 3. In the meantime, the first test photos of these models have already been posted online. Showing that Xiaomi’s under-display camera is the least visible and also offers the best image quality so far. Although the 2021 iPhone models are not expected to get an ‘invisible camera’, this could very well change in the upcoming year. 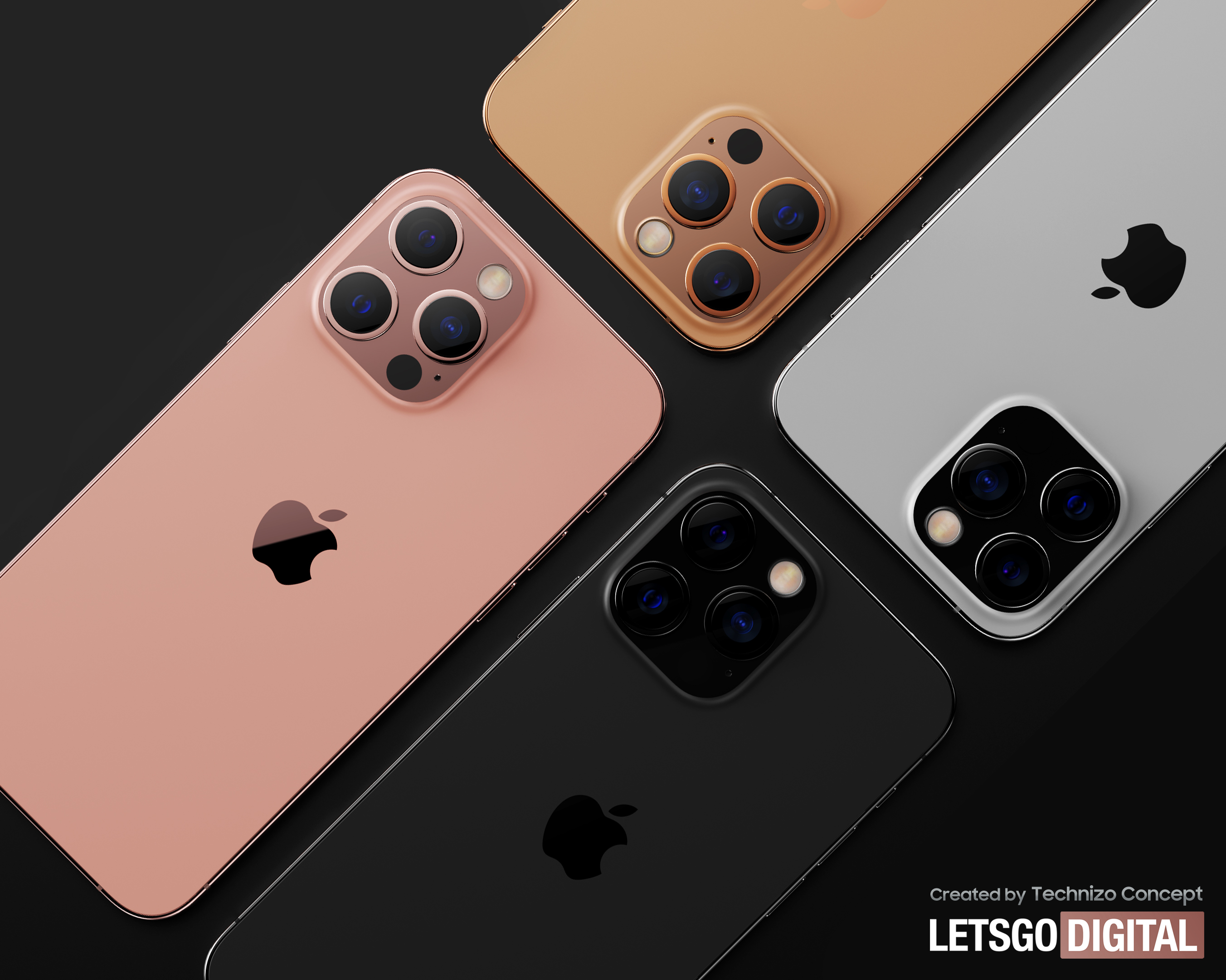 The triple camera of the Apple iPhone 12s Pro is expected to be renewed. Although the layout on the back will look almost identical, the camera system will function better than before. Apple seems to want to integrate larger image sensors, to improve image quality in low-light conditions. Due to these larger sensors, the camera will also protrude slightly further.

Presumably, a much improved ultra-wide-angle lens (f/1.8) will also be integrated. Including an improved Night mode to be able to take beautiful evening / night photos. We expect to see the Apple Sensor Shift stabilization technology, which was applied exclusively to the iPhone 12 Pro Max last year, also in the 12s Pro this time. Hopefully the zoom options will also be further expanded.

The LiDAR scanner will probably also be present again, in order to be able to perform accurate 3D depth measurements. It is an alternative to the 3D ToF camera and the laser autofocus sensor that is used on many high-end Android smartphones.

When it comes to the video features, several improvements seem to have been made. Including high-quality ProRes video recording, enabling users to set background blur, add filters and more. There is also talk of a Cinematic Video function for portrait mode and a filter system based on artificial intelligence. 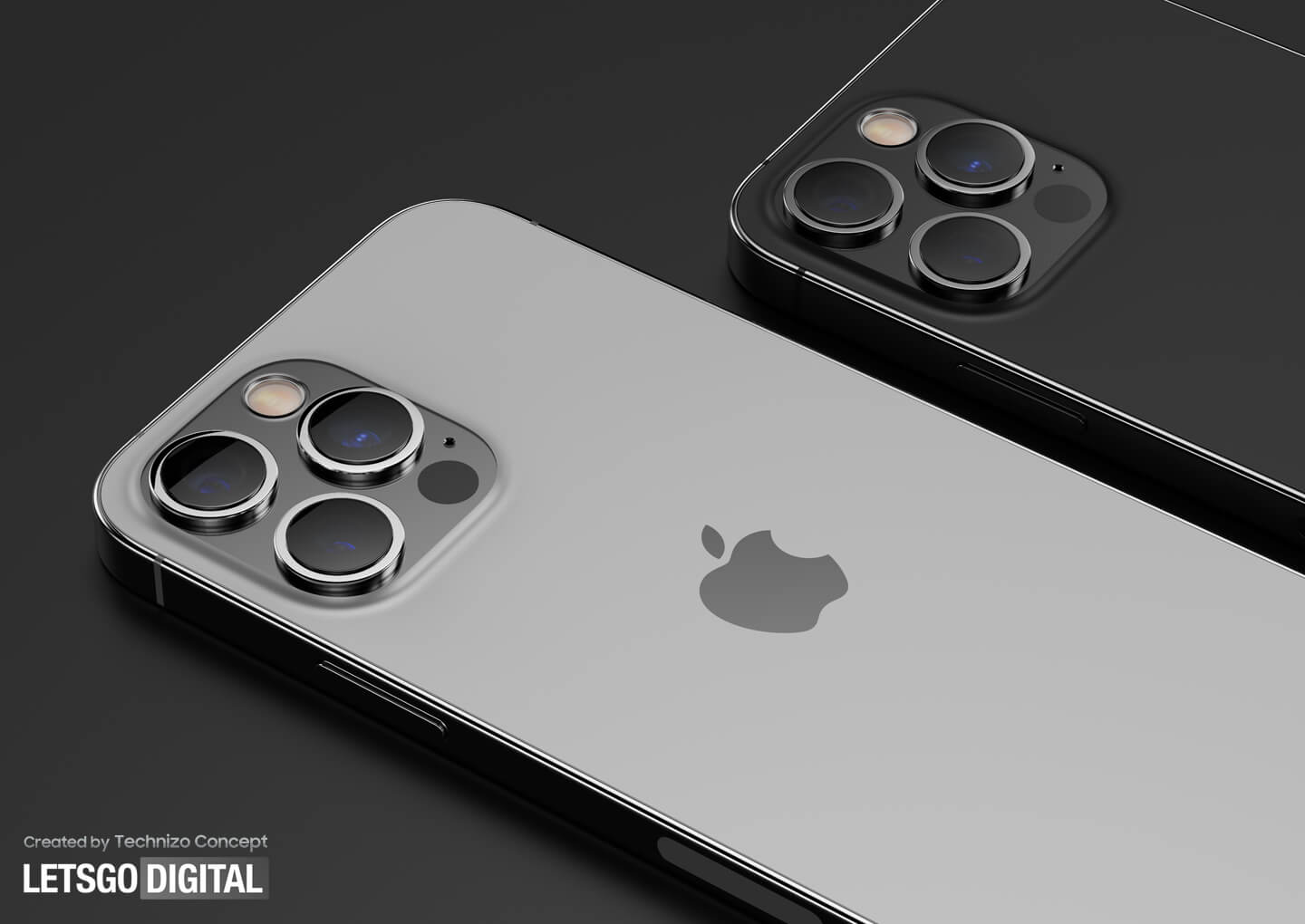 Like every year, Apple will integrate a revamped SoC. The 12s Pro is expected to be powered by the A15 Bionic SoC. Thanks to the integrated 5G modem, it will also be possible to make use of the 5G mobile internet network. Presumably, the new model will also offer mmWave support in more countries than before. Currently this high frequency is only available on the US models.

Of course, the iPhone 12s Pro will also run on a new operating system. iOS 15 has already been introduced by Apple at WWDC, in June this year. It’s a major update with many new features and improvements. An iOS 15 preview can be viewed here.

Perhaps Apple will also provide the new Pro model with a slightly larger battery. The iPhone 12 Pro with 6.1” OLED screen has a 2,815 mAh battery, which is good for an average battery life of approx.. 12 hours. There is speculation that Apple will install a 10% larger battery this time.

Its predecessor was also equipped with a larger battery. Partly due to the 5G antenna, the larger camera system and the thinner housing, Apple has opted for a slightly smaller battery with the 12 Pro. By using so-called soft-board batteries this time, Apple would be able to increase the capacity, without taking up extra space in the housing.

Regarding the charger and the fast charging possibilities, a Lightning adapter will likely not be included. Apple started this trend last year with the release of the iPhone 12 series. Presumably, the new models will support at least 20W fast charging and 15W wireless charging. For ‘fast’ wireless charging, Apple has its new MagSafe chargers on offer. They don’t come cheap, though. Especially when you consider that it only supports 15W charging. 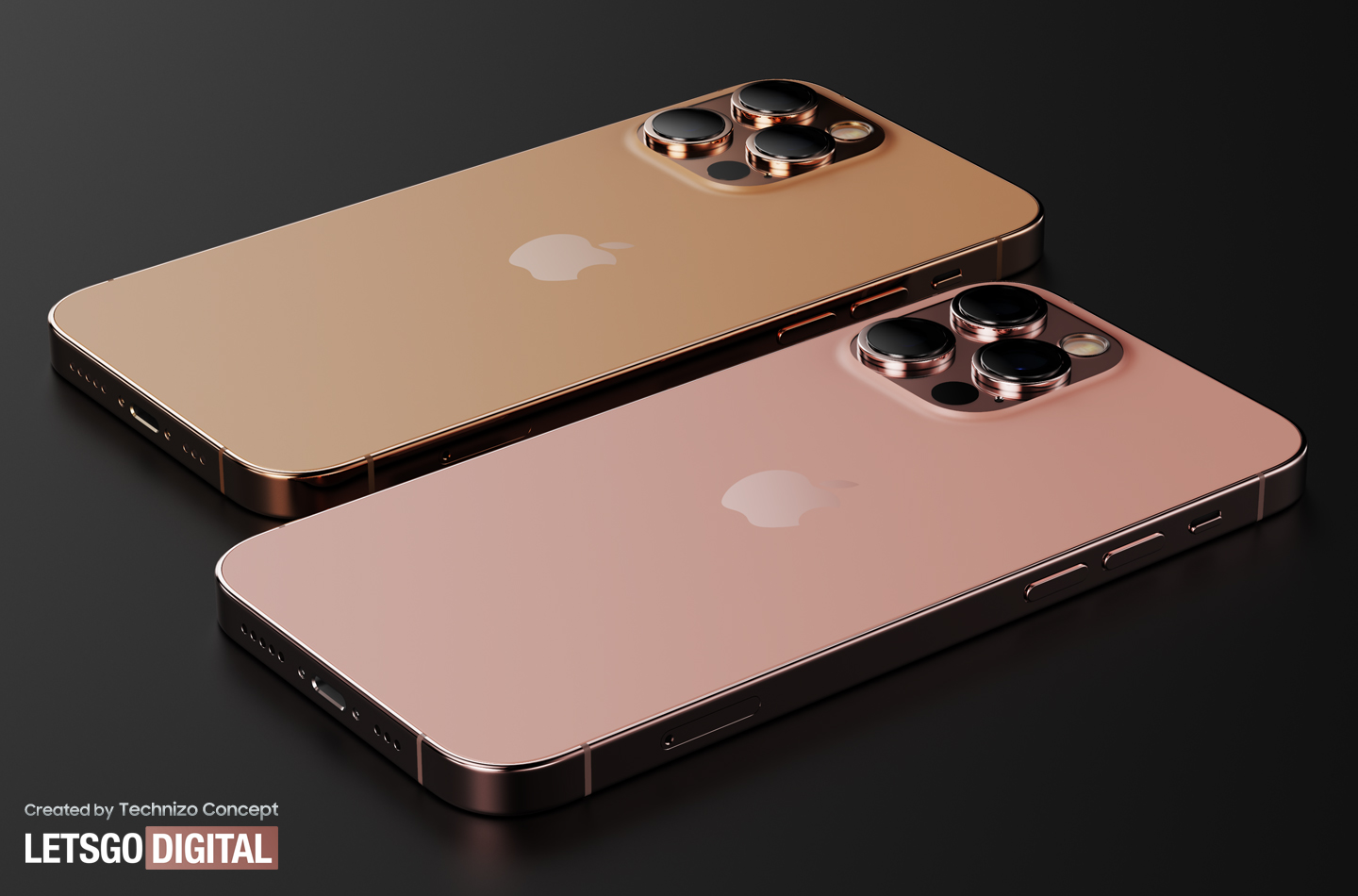 Much has already been said and written about the model name; Will it be iPhone 12s or iPhone 13? After the iPhone 11 and the iPhone 12 series, the iPhone 13 series seems to be a logical sequel. However, Apple sometimes deviates from this idea.

Apple has used the addition of an ‘s’ more often in the past, especially for new models with a similar design to their predecessor. This designation was last applied to the iPhone Xs in 2018 – as the successor to the iPhone X.

Although the vast majority of consumers will probably have no problem with an ‘iPhone 13’, manufacturers in the competitive, saturated smartphone market have to take everything into account in order to achieve the highest possible sales numbers.

Some claim that Apple has not looked at this in the past either, think for example of iOS 13. However, this name will not be experienced the same with software as with hardware – after all, a smartphone changes its software version every year, but the name of the device remains the same.

It would also not be the first time that Apple skips a number; the iPhone 9 has never been released – because ‘9’ is an unlucky number in Japan. The Japanese market is important to Apple, as the Silicon Valley company has been the market leader in Japan for years. All in all, it looks like the model name will remain unclear until September, although I personally expect Apple to opt for iPhone 12s. 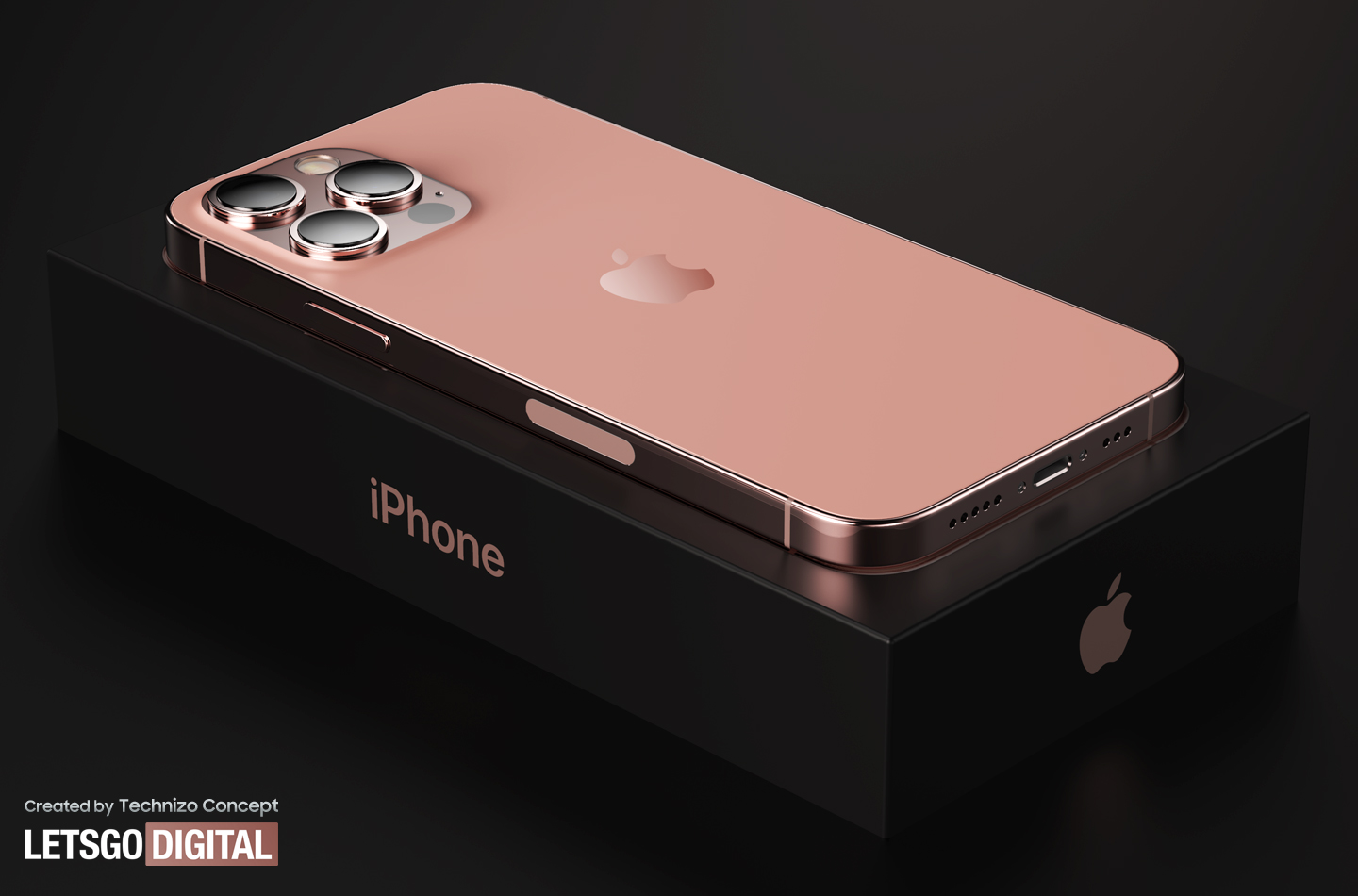 Apple will release its new smartphones in various sparkling colors. The Pro models are usually released in a chic color palette, which makes them very popular with business users too. The current iPhone 12 Pro is available in graphite (grey), silver, gold and ocean blue. In the latter model, the color changes according to the incidence of light. Only the gold model has a special coating, which makes the smartphone extra scratch-resistant.

Although it remains unclear in which colors the iPhone 12s Pro will debut, there have been several rumors that Apple will release a ‘Sunset Gold’ and a ‘Rose Gold’ variant this time. These new colors can also be seen in the product renders of Technizo Concept. In addition, a Mignight Gray and a Silver variant are expected for the Pro models.

Regarding the release date, last year Apple opted for an introduction in October. This was partly due to the supply chain problems caused by the corona pandemic. All previous years, the new iPhone models were announced in September.

The iPhone 12s models are expected to be unveiled in the first half of September 2021. Pre-order sales will probably start shortly after. The new smartphones will then likely be released at the end of September.

There is as yet no concrete information available about the prices. Last year the iPhone 12 Pro was put to market for €1,160 (128GB). The 256GB model costs €1,280 and the 512GB model is available for €1,510. The new 2021 models will likely get a similar price tag. Although it is possible that Apple will decide to increase the storage capacity, with 256GB being the minimum, supplemented by a 512GB and a 1TB variant. 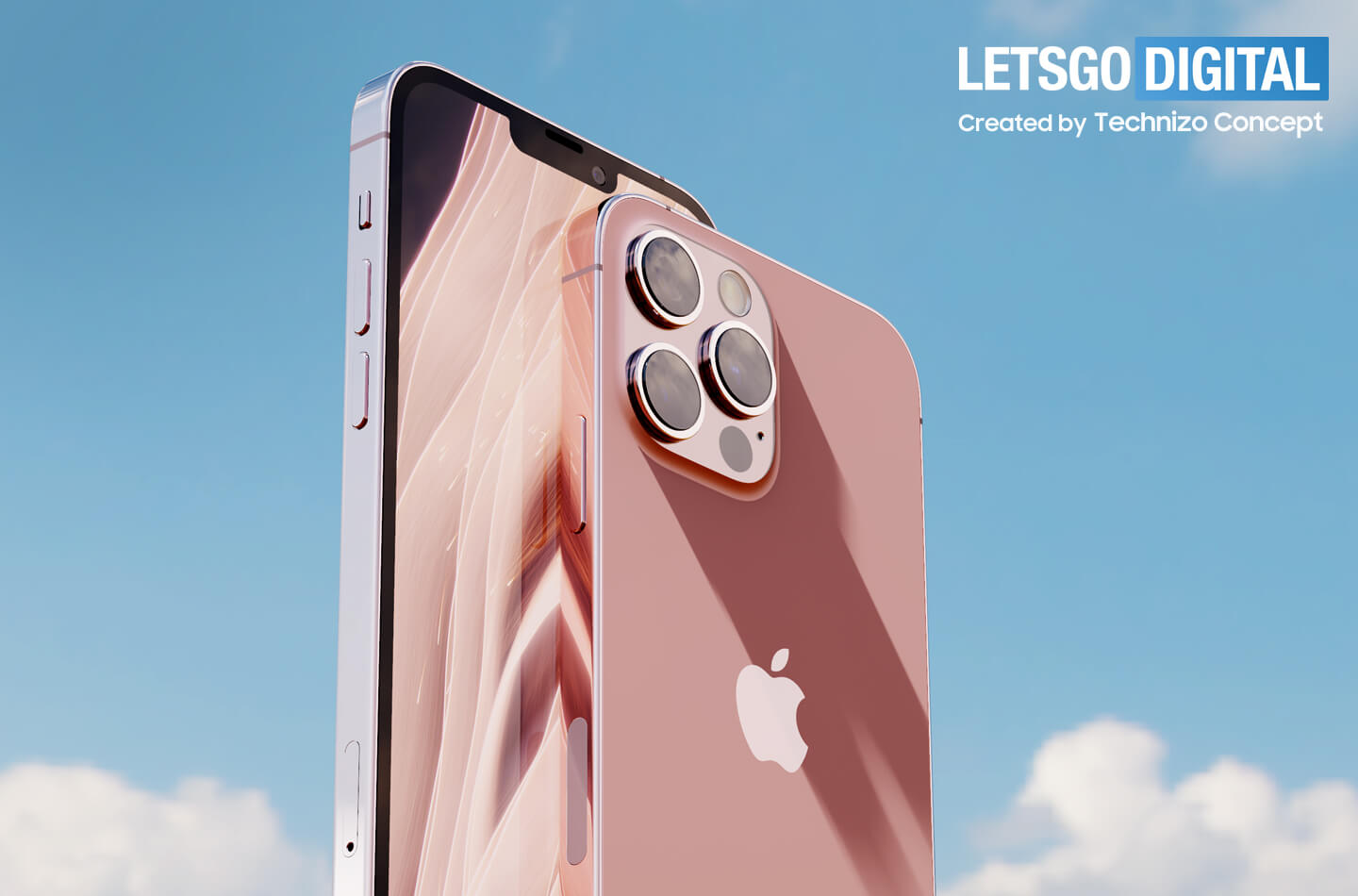 Note to publishers : The 3D renders in this publication are created by Technizo Concept in collaboration with LetsGoDigital. The product renders are for illustrative purposes only, this product is not for sale. Apple is expected to release the iPhone 12s series in September 2021. You can use the copyrighted images for your own website, YouTube and/or social media channels, please be so respectful to include a clickable source link into your publication.