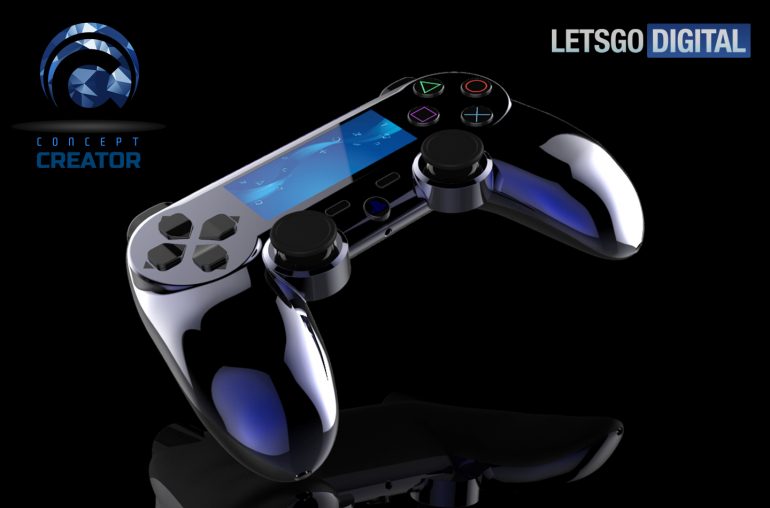 With the PlayStation 5 console it should be possible to play together by sharing the functionality of the game controller with friends, each with his own controller. The PS5 turns every single player game into a multiplayer game!

The next Playstation console is wrapping up to be the most powerful up to date, but power is sometimes not enough (remember Sega Dreamcast?). Sony tries hard to add various new functionalities in order to make gaming more social and engaging in its next-gen console and one focus of innovation is DualShock 5. We already know that the future PS5 controller will have more sophisticated haptic feedback with dynamic triggers, but now Sony is working on something completely different.

Through the years gaming slowly shifted towards multiplayer experience and many Massive Multiplayer Online games popped-up into existence. It’s more fun to play with friends but what about single-player games with their specific mechanics, story and charisma? What if players could share the experience of a single-player game but with friends – locally or in the cloud – by sharing the controls of the game? It turns out Sony is working exactly on that! 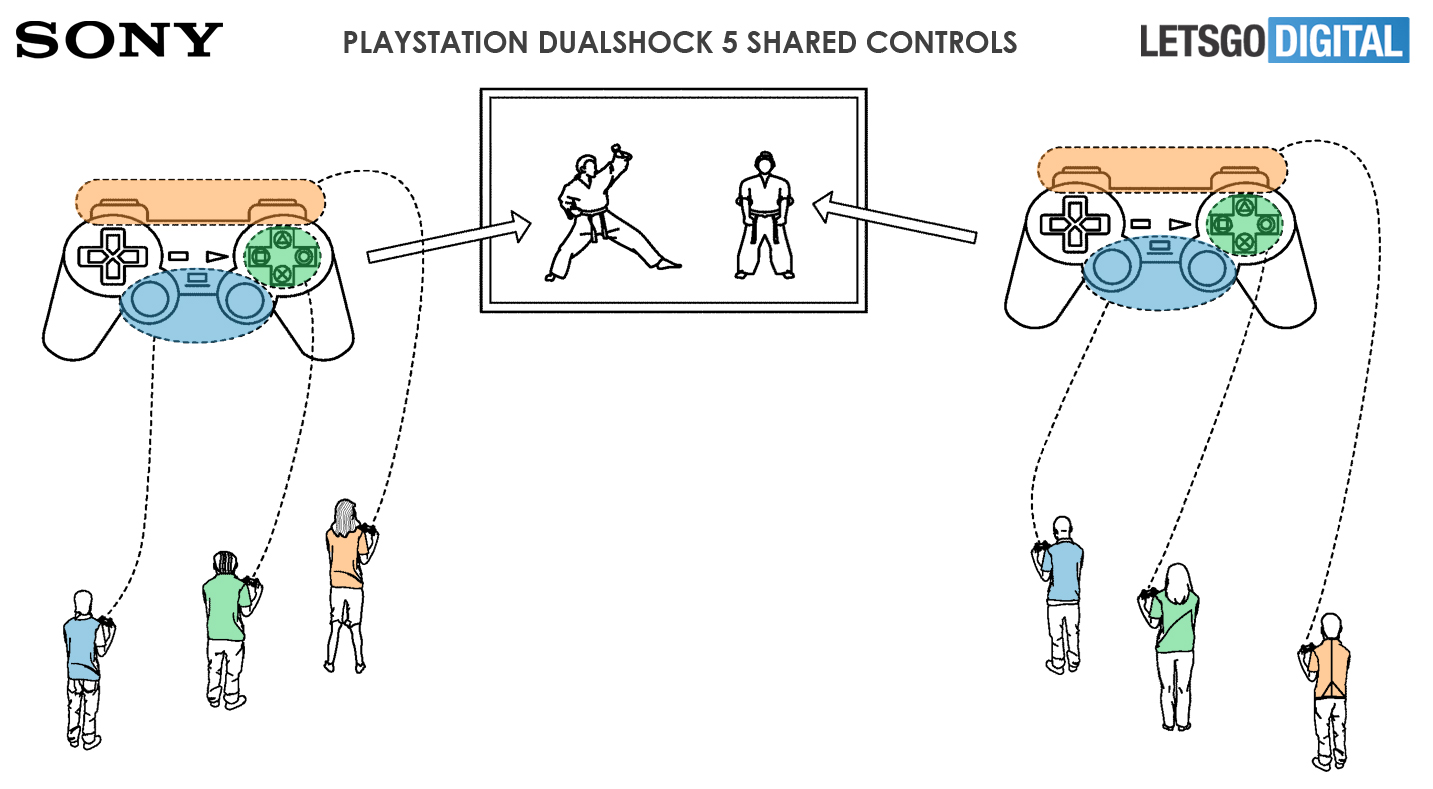 Halfway through 2018, Sony Interactive Entertainment filed a patent with the USPTO (United States Patent and Trademark Office) for a “Bifurcation of shared controls and passing controls in a video game.” The patent was approved on December 5, 2019 and includes extensive documentation that describes how Sony wants to turn every single player game into a multiplayer experience.

There are two ways of accomplishing this – the first is called “split controller gameplay” – basically it divides all the controls of a DualShock into groups and assigns different players to each group. One person can take control of the analogue sticks, the second manages main buttons and a third can operate the triggers. This scheme can be used in many scenarios – in a shooting game one person can navigate the character while the other does the actual shooting. Think Street Fighter but one person controls the movement and the other throws punches and kicks – a little tweak like this can result in a lot of fun.

Lots of possibilities open right away just by allowing this kind of more deep specialization. If you can shoot well but lack orientation or navigation skills, your friends can deal with that. Think about playing an air combat simulator – one person can fly the plane while the other shoots the bad guys – like in a real B-52. It’s about getting people to cooperate towards a common goal – very strong and engaging drive. These options are available both locally – while sitting on the couch together – and in the cloud – where no physical presence is needed. Each person will see the same image in real-time.

In this setting one “main” player chooses how the controls are distributed among up to 4 players. There is an option to be a silent observer and just watch the gameplay until the “captain” decides to put you in the middle of the action.

There’s also a second option, that Sony envisions in this patent filings. Simply speaking, gamers can take turns controlling a single character in a game. This can be done on a time basis – for example, 2 minutes for each player and if you score enough points, you get to play some more. Other iteration uses the aforementioned “captain”, who chooses the order – passing the controls between players with a single tap on a button.

When sharing is done in the cloud, there is a good chance people won’t always know each other. In this case, the “captain” will use real-time statistics such as player rankings and rating to get an assessment of the skills of that player before taking him on board. There are alternatives too – paying virtual money or points, earned by gaming, for a spot on a team, or simply using a voting option.

Another possibility lurks in the patent documents and it is a bit vague. Sony wants to include VR gaming in this sharing scheme. When a PSVR user plays a game, another person can receive the stream and use it with his own VR headset not only to ride along but also interact and play. Details are scarce and it’s not clear yet how Sony will implement this particular option.

Taking into account all the technical challenges, the idea behind Sony’s patent is very interesting, although not entirely original. Sharing controls has always been a thing among gamers (people used one keyboard to play single-player games together since Duke Nukem and Need for Speed). Making this a valid option for the next DualShock 5 and PlayStation 5 makes a lot of sense, not to mention Sony is no stranger to the idea.

Beyond Two Souls, which was an exclusive for PS3 and PS4, developed by Quantic Dreams for Sony Computer Entertainment, used something very similar in the gameplay. Essentially, the game is a single-player cinematic adventure, but game mechanics required switching between two entities – Jodi and Aiden – in order to advance the story. It could be done alone, by simply taking control of both these characters, or by engaging a second payer to help out.

Microsoft also launched a similar option on its Mixer streaming platform, called Controller Sharing. When streaming a game people got the option to give the controls to the viewers, creating a shared experience and allowing them to cooperate with the streamer or wreak havoc. Sony’s taking the sharing one step further though, with the option to split controls into groups and involve more people. There is no guarantee we’ll see this functionality in the next DualShock controller but the potential behind the idea is huge and Sony might decide to take its chances.

The PlayStation 5 will be released at the end of 2020 and although the official announcement of the console is still months away various big retailers already offer a pre-orders possibility. We expect to see official news from Sony as early as February when there will be a special Playstation event held or at the E3 Expo in June 2020. PS5 will be the first 8K capable console with SSD storage and ray tracing support – courtesy of a custom Radeon Navi GPU. The CPU is allegedly based on a third-generation Ryzen line and has 8 cores built on Zen2 7nm architecture.

Sony also confirmed a new controller is underway with improved haptic feedback and adaptive triggers. Last week LetsGoDigital reported on patent for a new PlayStation game controller that can be used both at home and on the road. It uses geolocation data and sensors to determine the state of the user and adapts the interface and the displayed information accordingly. Whether this functionality will be adopted in the DualShock 5 remains unknown but it’s clear that Sony is considering various options for the new controller.

Regarding the price of the new console, it is expected to be around € 500 and recently news for a Pro version surfaced too, although we won’t see the PlayStation 5 Pro until late 2023, probably. Another mystery is the design – the PS5 Dev Kit renders turned out to be quite close to the real thing, as leaked images have shown, but there’s no information on how the final consumer version will look like. A cool video render from Concept Creator shows a possible design for the console and the controller but we’ll have to wait at least couple of months for the real thing.

Take a look at the patent of the Sony DualShock 5 controller.

Editor’s comment: With special thanks to our Dutch friend Jermaine Smit (alias Concept Creator) for providing us the 3D renders used in this publication.