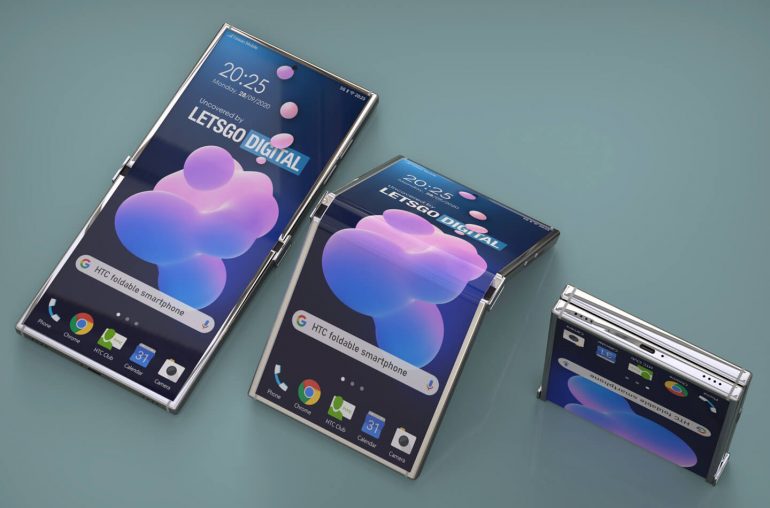 The first 5G phone from HTC is already a fact. In addition, the Taiwanese manufacturer has now started the development of a foldable smartphone.

For a long time it remained very quiet around HTC. The Taiwanese manufacturer decided to focus entirely on the VR market. However, after HTC appointed a new CEO, in September 2019, there seems to be some more movement in the matter. 5G will offer new opportunities, especially in the high mid-range segment. This has led to the unveiling of the HTC U20, the brand’s first 5G phone, in June this year. At the same time, a cheap HTC phone was also introduced, the Desire 20 Pro.

In an interview, HTC’s new CEO, Mr. Yves Maitre, expressed the expectation to run a profitable smartphone division by 2025. Probably even faster, but this will also depend on the carrier deployment speed, he added.

But what about HTC… if the company wants to innovate again, it will not be easy to skip the trend of foldable displays. A new patent indicates that HTC is indeed developing a folding smartphone. 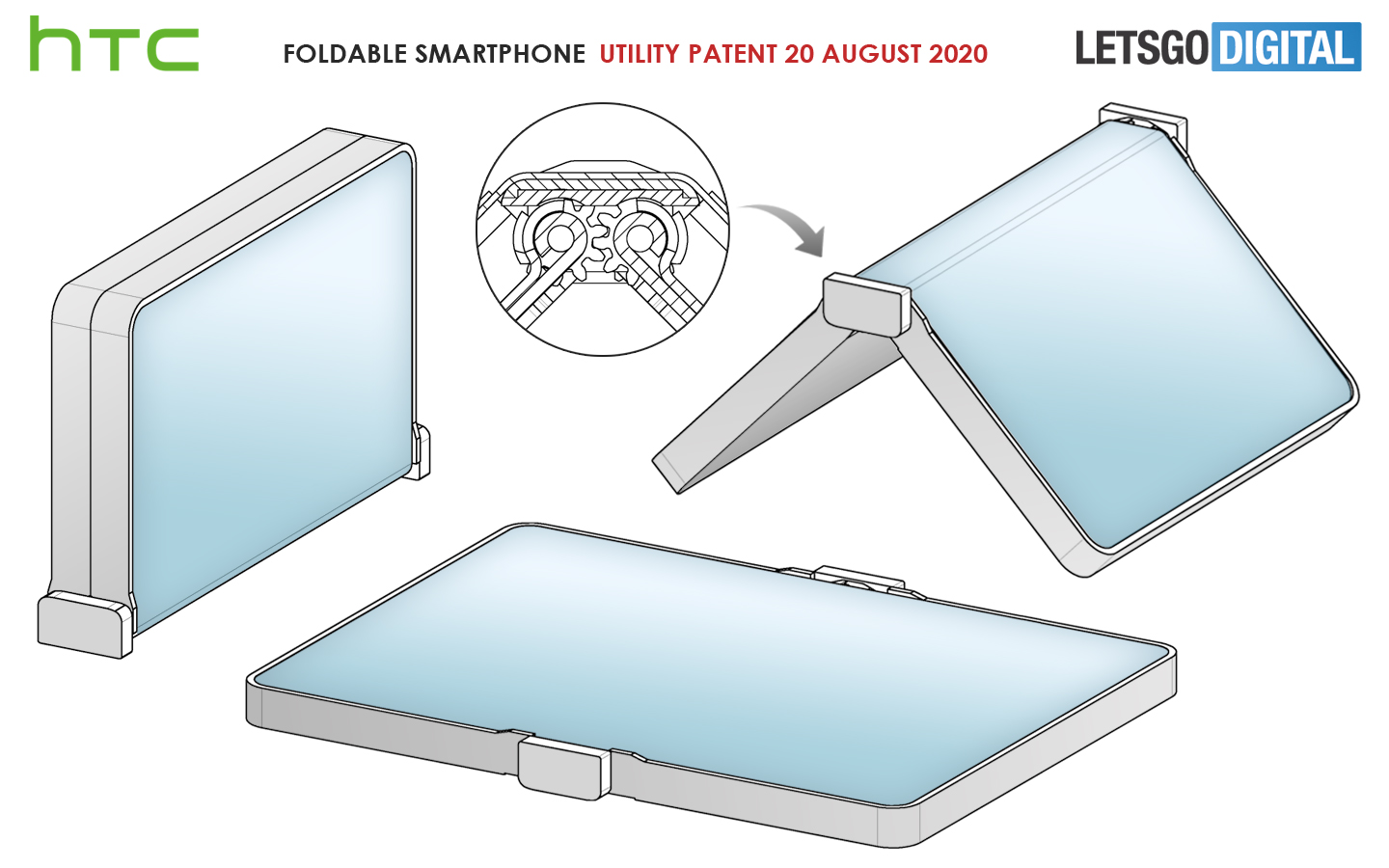 On New Year’s Eve 2019 – three months after the appointment of the new CEO – HTC Corporation filed a patent in the USA for a “Foldable display device”. The documentation was released on August 20, 2020 and published in the WIPO (World Intellectual Property Office) database directly after.

The description refers to a foldable display device, in the form of a smartphone or tablet. It’s an outward folding device. The documentation goes especially in-depth about the hinge. The hinge will also make it possible to use the device both in a completely open and a half-open state.

On both sides of the foldable HTC phone the hinge comes with a support module in which various gears will be incorporated. This system must ensure that the flexible display panel can’t be over-stretched during folding. It will also reduce the chance of wrinkles in the screen, as stated in the documentation. 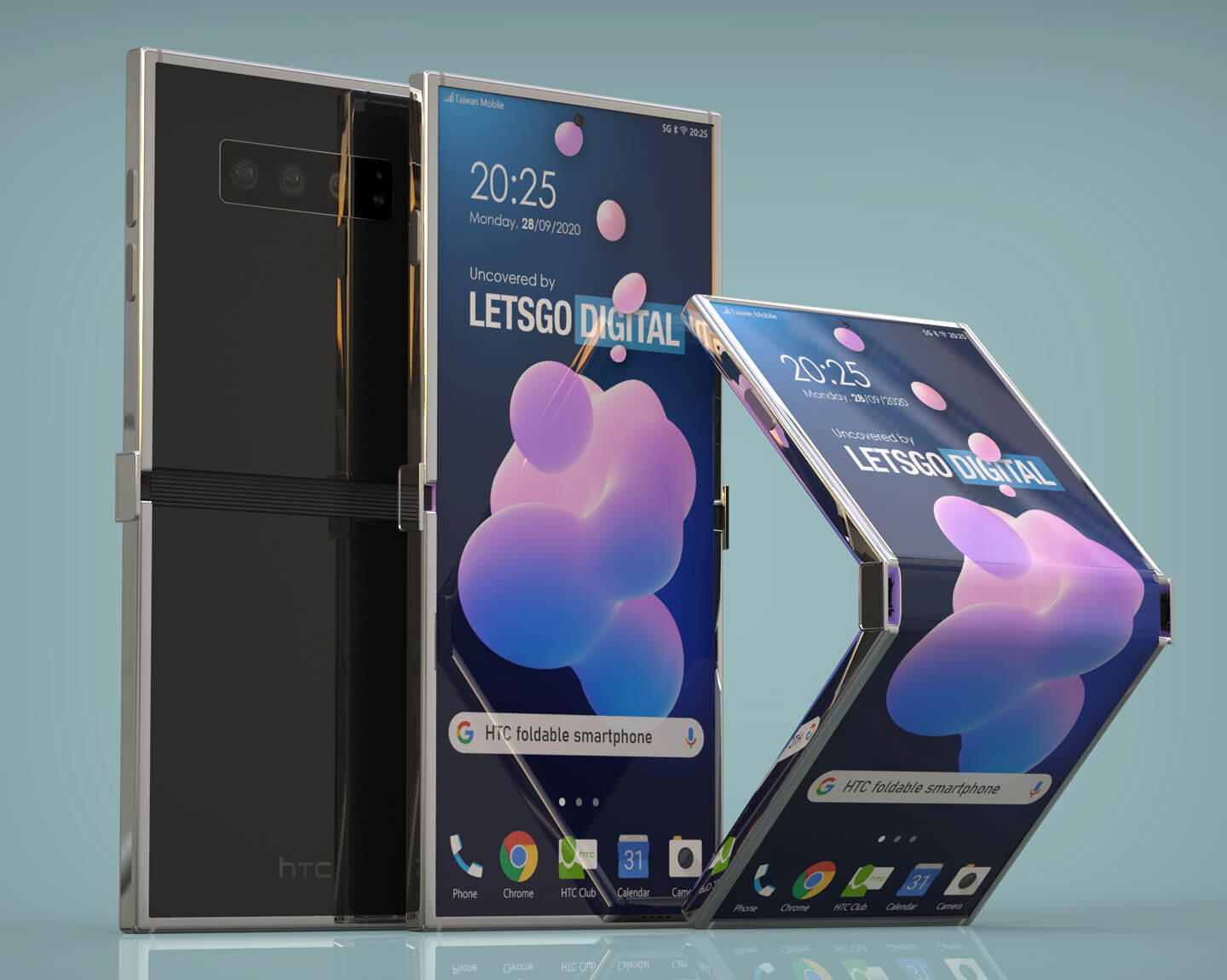 Due to this mechanism, the hinge protrudes from the housing. The question remains how this will function in practice; will you be still be able to easily store the device in your pocket? And what about dust and dirt? Unfortunately, these aspects remain unanswered.

The flexible screen of this HTC foldable smartphone is located on the outside when you fold the device. The Huawei Mate X and Mate Xs have a somewhat similar design – although these devices fold out in width (tablet), instead of length (clamshell). Another clear difference, HTC seems to opt for a complete full screen design. As a result, it remains unclear what HTC’s plans are regarding the camera system.

Placing the display on the outside eliminates the need for a separate cover display, thus savings can be made on the production costs. However, there is also a clear disadvantage; the flexible screen can be damaged much easier when you carry it with you. Yet HTC seems to see the most potential here for the time being.

The patent documentation shows that the development of this HTC foldable smartphone is still in the early stages. The focus is still on the hinge and not so much on the mobile device itself. As a result, associated functions remain undiscussed – think of the design, but also the cameras, buttons and connections, etc. Nevertheless, it is interesting to see that HTC is also working on the implementation of a flexible display in a smartphone. 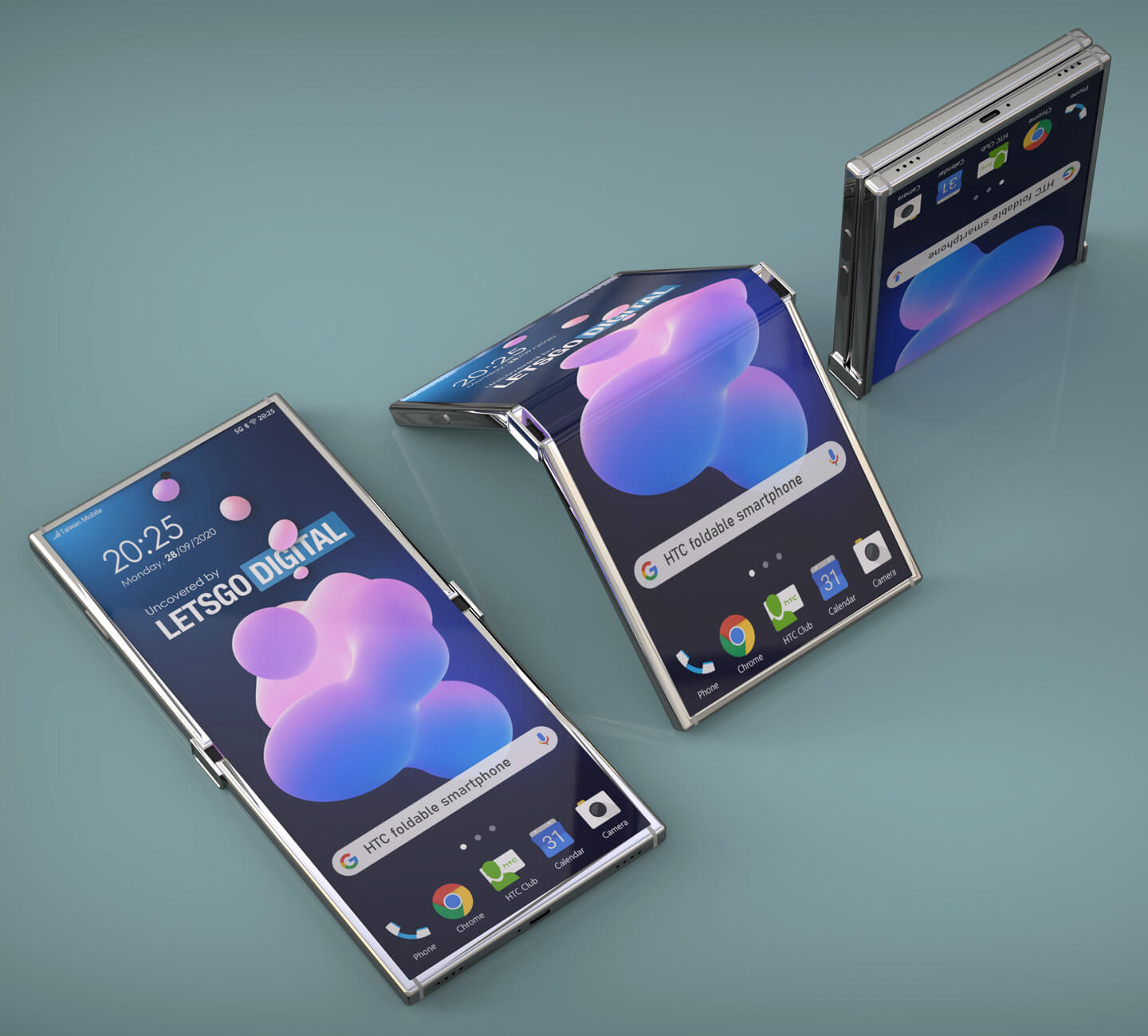 The design team of LetsGoDigital has made a series of 3D renders based on this patent to better visualize the patented technology. We have reserved ourselves the freedom to fill in certain missing design elements. For example, we opted for a clamshell model, all the more because the documentation mentions the possibility of using the foldable smartphone both half-open and fully open. A half-open position seems to offer added more value when you fold the phone horizontally – think of the Flex mode on the Samsung Galaxy Z Flip.

Yet HTC could also apply this technology for a folding phone that unfolds into a tablet format – where a kind of laptop screen can be created when you use the device in half-open position – like the Samsung Galaxy Z Fold 2. HTC,  however, seems to focus on creating a cost-efficient device; a clamshell model is significantly cheaper and easier to manufacture than a vertically folding device. Regardless of whether HTC will choose for a horizontal or vertical folding line, the patented hinge is only suitable for HTC phones with an outward foldable display.

Optionally, a hole-punch camera can be integrated, like with the recently introduced HTC U20 5G phone. In addition, a camera system can be placed on the rear, for the renders we designed a triple camera. However, HTC could also choose to only implement a selfie camera. You will then still have sufficient photography options – if you fold the device a dual display phone is created. Users can then use the screen on the back as a viewfinder. Moreover, a separate camera system on the back will only function when you use the phone completely open. And by omitting this camera system entirely, costs can be saved again. 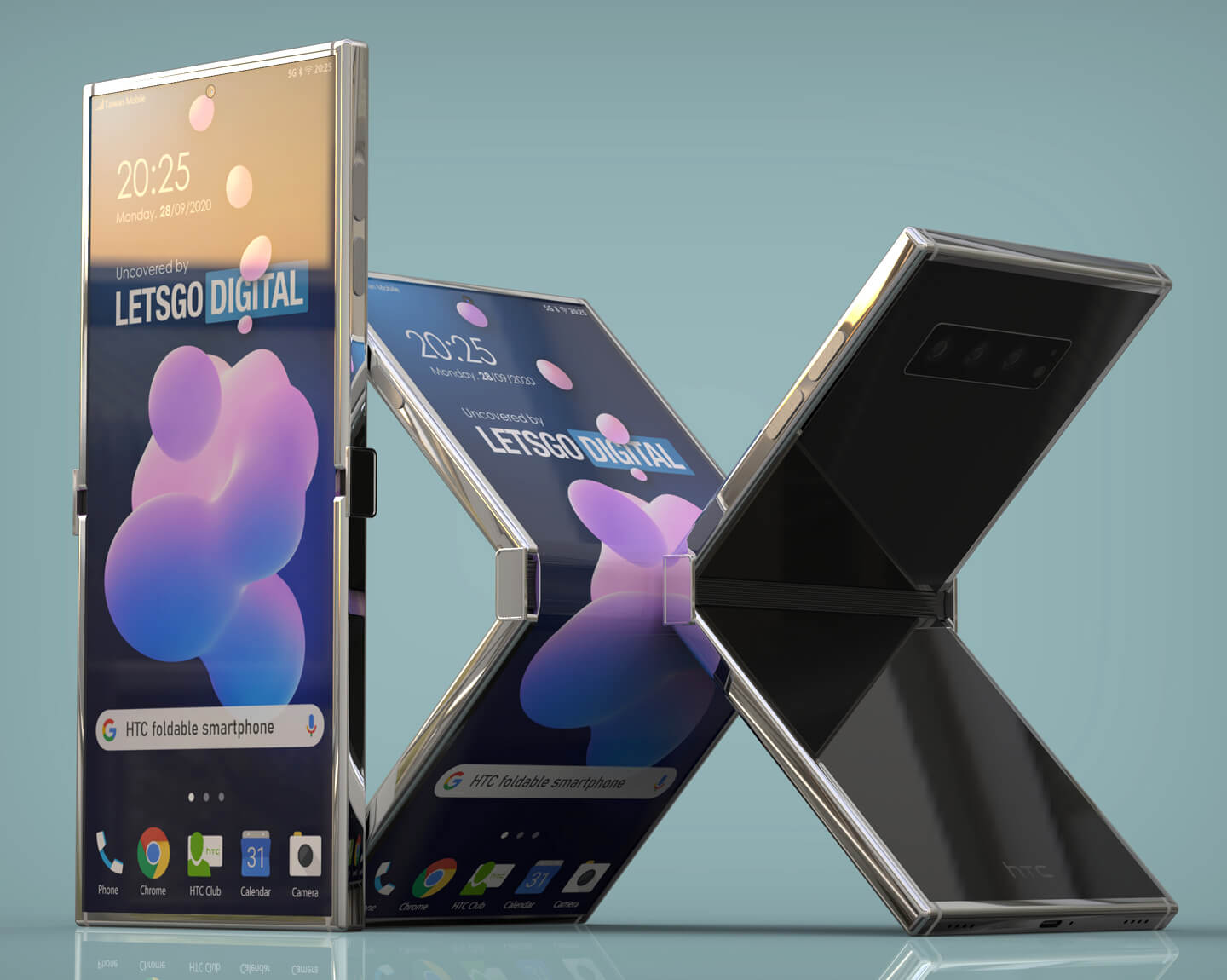 HTC and the smartphone industry

HTC was already active in the mobile industry at the time of the feature phones. The company was founded in 1997 by Mrs. Cher Wang and Mr. Peter Chou. The former remained as CEO of the company until September 2019 and is still active as chairman of the HTC board.

The Taiwanese manufacturer has released many different types of devices over the years, such as the HTC Touch folding phone. But also the HTC P4350 slider phone, for example. In addition, the company released compact pocket computers with a keyboard, such as the HTC Touch Pro2 and the HTC TyTN II. Due to the large differences in form factor, these phones also required a completely different way of operation and control. Therefore HTC has already gained the necessary experience in that area.

It is almost impossible to imagine now, but HTC was also the very first smartphone manufacturer to introduce an Android phone. At the time, HTC was one of the largest phone manufacturers. The first Android smartphone was the HTC Dream, also known as the T-Mobile G1 – this phone model was announced in mid-2008. It’s an slider smartphone with Azerty keyboard that was praised for its solid and robust design with excellent hardware. At the time though, there were still doubts about the Android OS due to a lack of functionality and third-party software. 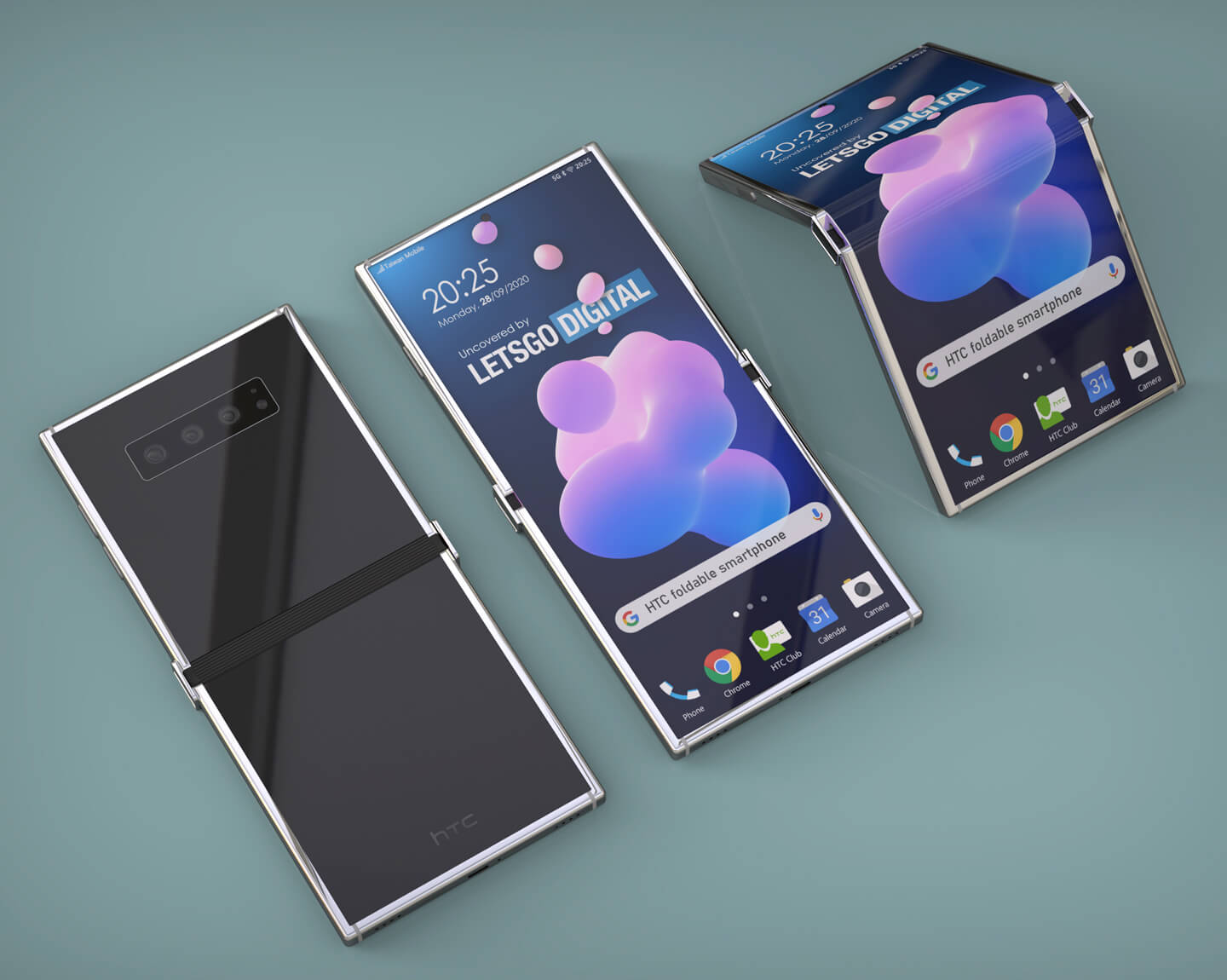 Afterwards, HTC also stood at the cradle of the Google Nexus and Google Pixel smartphones. For example, the Google Nexus One was released in collaboration with HTC at the beginning of 2010. In 2016, the very first Google Pixel smartphone was also manufactured by HTC. The same goes for the Pixel XL and Pixel 2. Since the Pixel 3 however, Google has taken full responsibility for development. In the meantime, Google has also released several phones in collaboration with LG and Samsung.

Where manufacturers such as Google, Samsung and Apple have never stopped innovating, this has been the case for HTC. Not innovating means standing still, which automatically results in regression. In addition, HTC entered the VR market too early. This premature market is still hardly profitable. Still, HTC expects to be on the winning side. The new CEO sees a promising future for both the VR department and HTC’s smartphone division.

Time will tell whether HTC is actually able to set up a profitable business in this overcrowded smartphone industry. After all, this requires more than just the release of some new phone models. The marketing division will also have to be set up again, as the company is hardly active in Europe anymore.

View the documentation of the HTC foldable phone here. 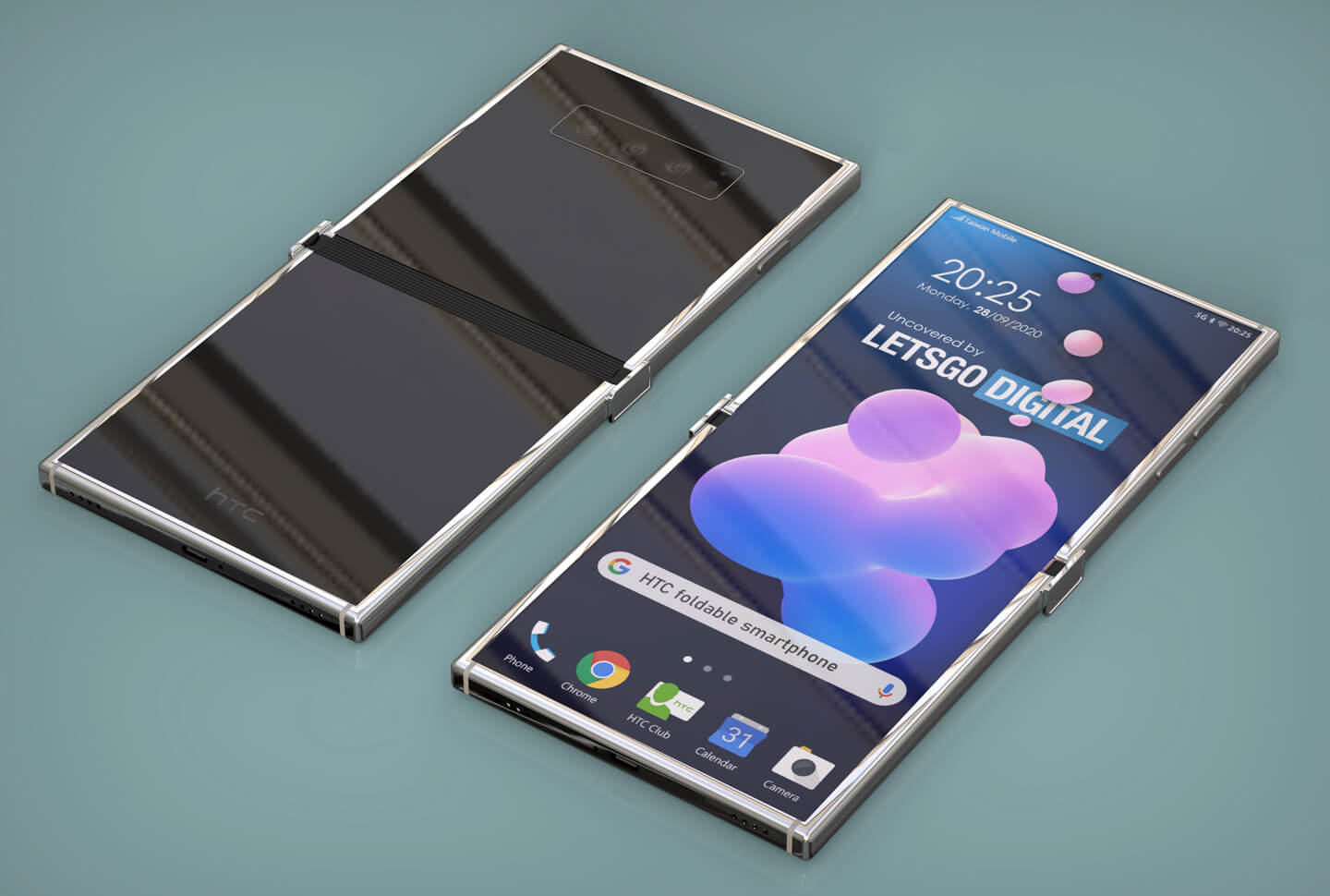