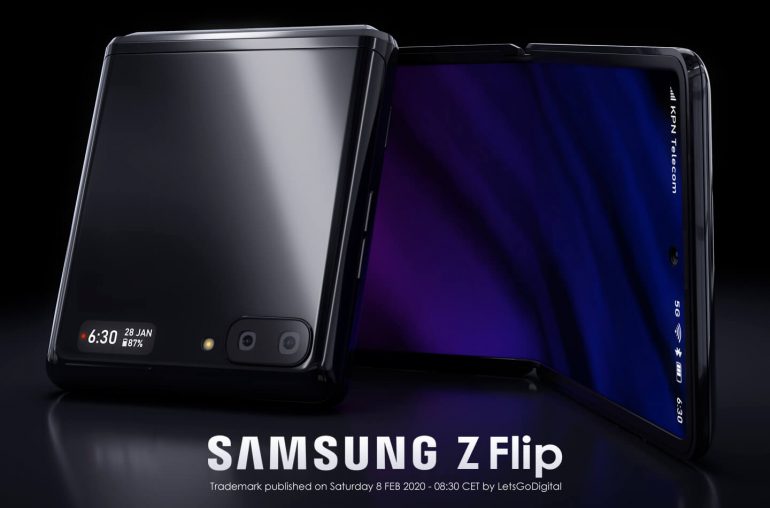 Samsung confirms the product name of next week's expected foldable smartphone, by submitting a trademark for Samsung Z Flip in Europe.

February 11 is approaching fast and all Samsung fans will be trembling in excitement as the Korean tech giant will reveal the new Galaxy S20 series but some additional surprises as well. There’s a new foldable phone to make the first appearance in San Francisco at the Unpacked 2020 event and although there were many leaks, the name of the device was still an unknown quantity.

We got rumors of a Galaxy Fold 2, then the codename Bloom was in circulation for some time and halfway through January Ice Universe twitted that Samsung will probably use the name Galaxy Z Flip. Now the Z Flip part is officially confirmed by Samsung itself with trademark registration for the name. 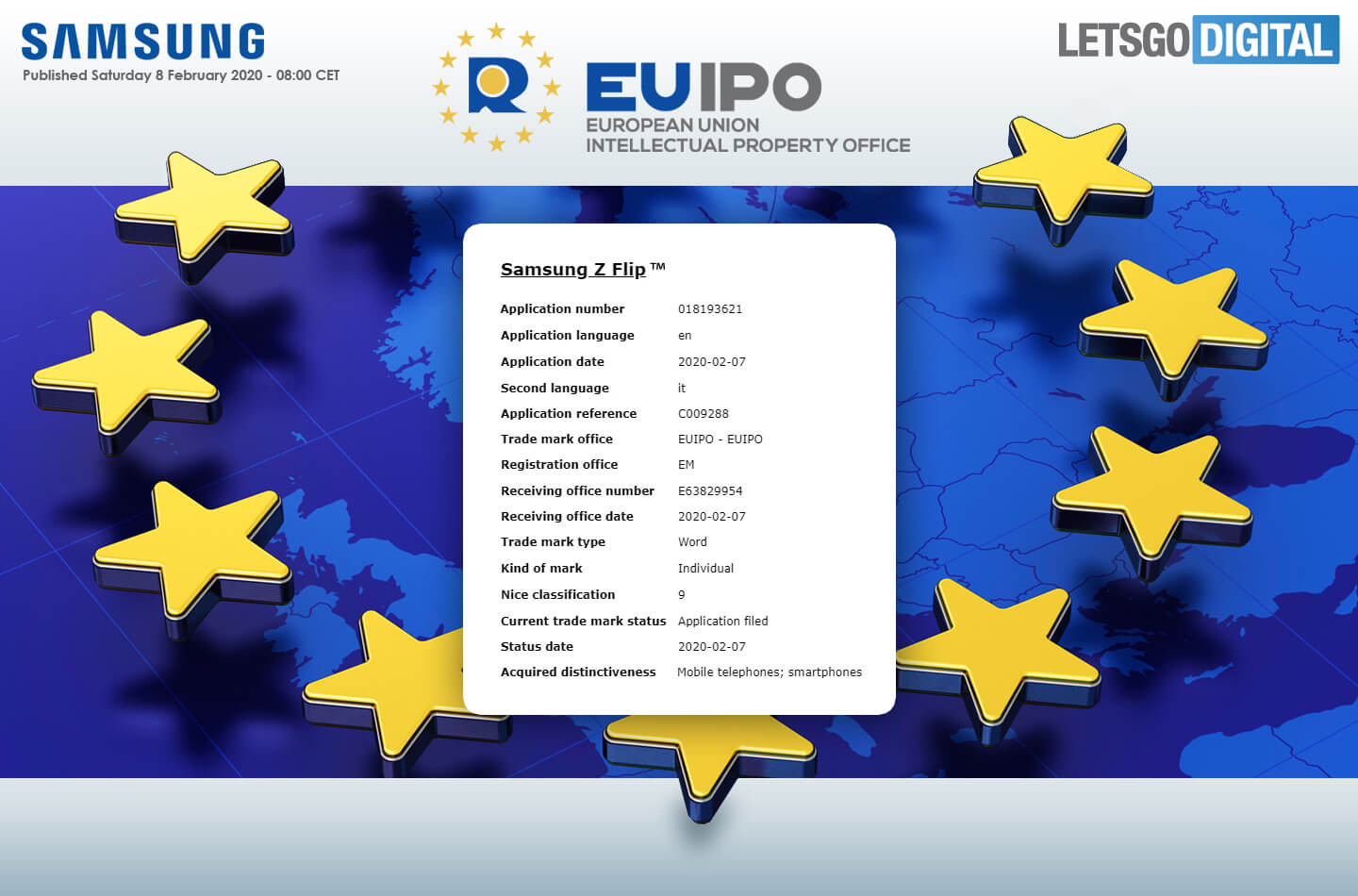 On February 7, 2019, Samsung Electronics applied for a trademark at the EUIPO (European Union Intellectual Property Office). As reported first by Ilse Jurrien on our Dutch edition this morning the requested name ‘Samsung Z Flip‘ is categorized as Class 9, with the following description: Mobile phones; smartphones and tablet computers; flip cover for mobile phones; smartphones.

The official action by Samsung practically confirms what we’ve already known – the name of the next foldable will be Z Flip. The omission of the Galaxy part is strange but there’s no indication that Samsung will stir away from the long-lasting brand. All Samsung phones fall under this moniker and there’s no reason for an exception.

The strange part is that Samsung often registers both names – with and without the Galaxy part. It’s possible that the other application is still pending and we’ll get a document for the Galaxy Z Flip as well in a day or two. Historically Galaxy name runs along the Android OS with the first model introduced in 2009 – more than 10 years ago. It was called Samsung Galaxy with an additional model numbering – i7500.

His successor was the Galaxy S, the one that started the S-series for Samsung, still going strong today. The new S20 is also placed within this line-up, although Samsung decided to skip some numbers and instead of calling it S11, opted for S20. This has two possible reasons behind it – firstly Samsung is tying the number with the year 2020 but on the other hand, we expect the iPhone 12 this fall and it won’t be presentable for the Korean manufacturer to lag behind in numbers with a Galaxy S11. It would’ve sent a wrong message.

And considering all this, with the Z Flip also running on Android, it is likely that this folding phone will also fall within the Galaxy family.

The Samsung Z Flip or Galaxy Z Flip will be a different foldable than the first-generation Galaxy Fold. The device folds on a horizontal axis and bears more similarities with the Motorola RAZR than with its own predecessor. Z Flip popped-up in the webspace several times and we made a 3D concept of the Galaxy Z Flip, to give a better idea of the device. Shortly afterward, a hands-on video circled the web, showing the Z Flip being opened and closed.

There was a ton of speculation concerning the pricing and the release date of this phone. Valentine’s Day is approaching and Samsung might use this opportunity to start accepting preorders but that’s the optimistic scenario. We might have to wait a little longer but the Korean company won’t have the luxury to take its time – the direct competitor – Motorola RAZR will hit stores on February 18, 2020.

The Z Flip is expected to be a lot cheaper than the first Samsung foldable. Rumors have put the price as low as $700-800 but realistically the phone will probably sell around the $1500 mark. Given the already announced price of the Motorola RAZR ($1500) and the considerably better specs of the Z Flip, we can expect Samsung to opt for the same price, expecting consumers to reach for the better product.

Simultaneously with the Samsung Galaxy S20 models and the Z Flip, new Galaxy Buds+ will also make a debut. The updated earbuds have a larger battery (270 mAh) but miss the active noise cancellation many users wanted. The new earbuds will most likely come as a bonus with all the S20 and Flip preorders, so if you plan to get one of those devices, you can make a preorder and grab the Buds+.

Although the Z Flip still has to be officially unveiled by Samsung, a Limited Edition was announced yesterday. The Russian company Caviar has released three Galaxy Z Flip Limited Edition smartphones, which will make a debut simultaneously with the original device. The Samsung Galaxy Unpacked event will start on Tuesday 11 February at 7:00 PM GMT. You can watch the whole show through live streaming as always.

Take a look at the trademark filed in Europe for Samsung Z Flip.