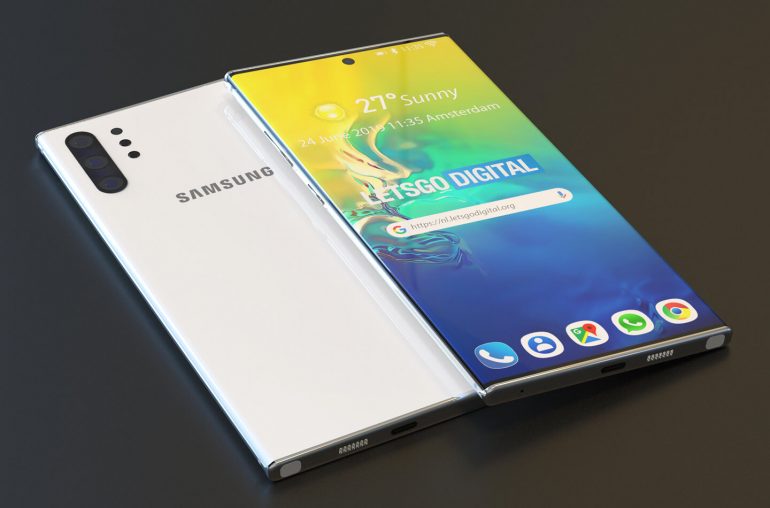 Samsung is working on a Galaxy Note 10 Lite

The long-rumoured Lite version of the high-end Galaxy Note 10 might be in development. What’s the design and key differences with the flagship model?

Looks like the top-tier smartphone space will get even more crowded, now that Samsung might bring its Note portfolio to three models. The Korean tech giant released two Note 10 models this year – Galaxy Note 10 and Note 10+ and now there is strong evidence for a Note 10 Lite coming up. Although rumours about this have been circulating the web for quite some time now, it wasn’t clear whether Samsung would actually bring the Lite treatment to the Note series.

Earlier this week, the US regulatory body (FCC) certified a stylus pen with Bluetooth connectivity, which strongly points toward a new Note device. Furthermore, earlier this week a Geekbench test surfaced from a Samsung device with model name SM-N770F. The benchmark shows that the device is powered by a 1.79Ghz octa-core Exynos 9810 chipset with 6GB of RAM. This is the same SoC that was also used in the Note 9 last year. Taking into account the way Samsung labels its models (SM-N970 for the Note 10) and the older chipset, we can safely assume Note 10 Lite model is on its way.

Besides the less powerful chipset and a more modest amount of memory, the new Samsung smartphone will run Android 10 out of the box. It is still unclear when Samsung will officially unveil the model, but it might take some time. Traditionally, the S-series debut is scheduled for February and indeed we expect to see Galaxy S11 in February 2020. We might have to wait a bit longer for the new Lite variant to appear.

The design of the new Note 10 Lite remains a mystery, but as always LetsGoDigital delved deep into the patent filings to discover an interesting find. A design patent for a device, very similar to Galaxy Note 10 (Plus) but with some clear differences. 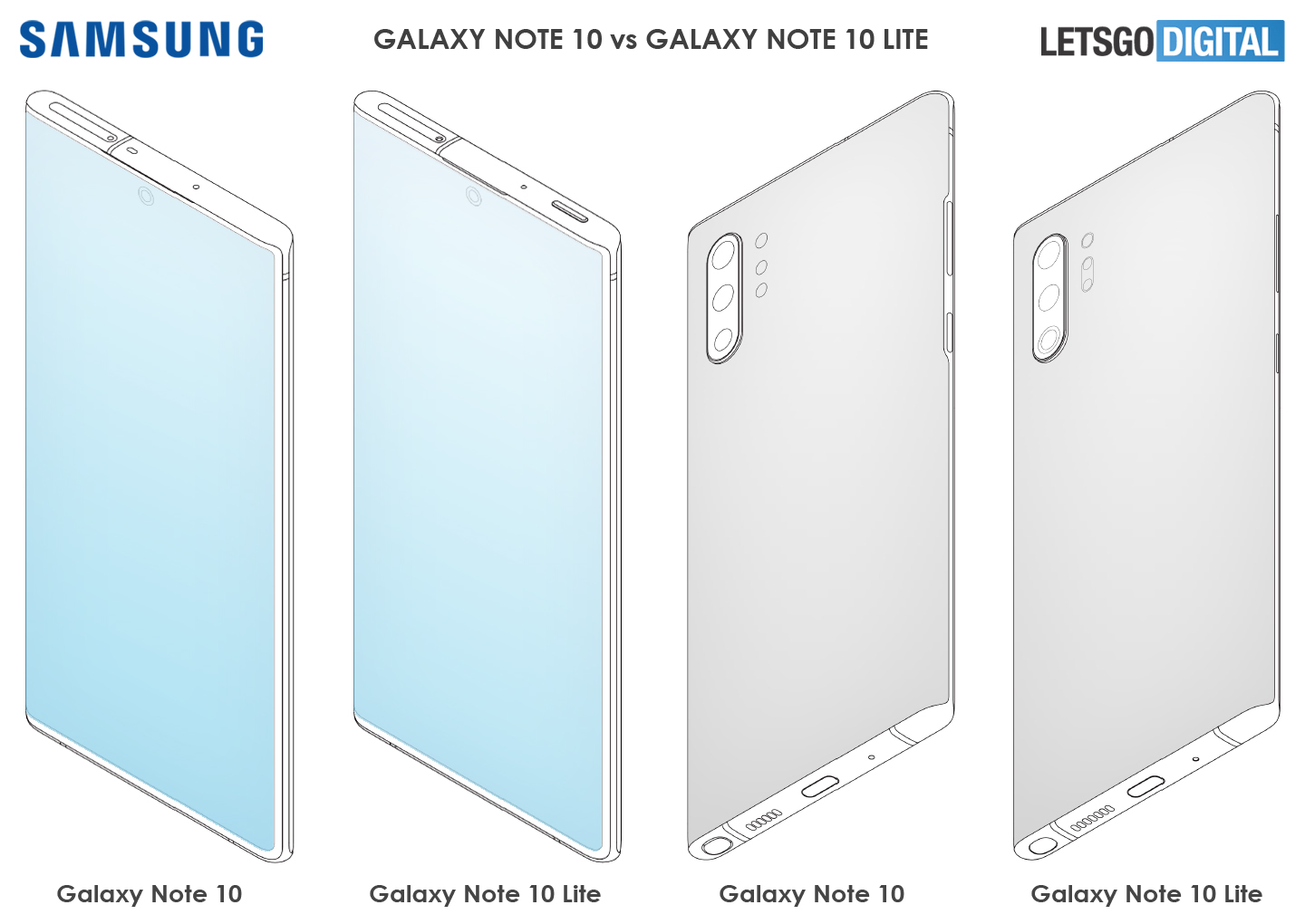 The design patent application was filed on 26th September 2019 with the Brazilian patent office called the Instituto Nacional da Propriedade Industrial (INPI). The agency caught public attention after Sony filed the design patent of the much-discussed Sony PlayStation 5 Dev Kit there. The Samsung Electronics patent was published on October 15, 2019, with eight images included.

Now let’s compare the Galaxy Note 10 patent images with the new ones, starting from the top. The small oval opening, which functions as a speaker and is located directly next to the SIM compartment in the regular Note 10 model is absent from the new images. (No. 1 on the image below). There is a strange button on the top – quite possibly it’s a power button. Current Note 10 models use a different layout – there is a hybrid Bixby/Power button on the left side – long press brings up the controversial Samsung assistant, while short tap will get users on the on/off menu screen. The shape of the receiver is different too (3), the new one seems a bit shorter.

On the back we can see a slightly different camera system (4). The lower lens looks different with two rings depicting possibly a different lens. On the Note 10 that’s the place for the telephoto camera, which may be the case here as well, but the zoom levels may differ due to the new lens system. The Depth Vision camera (the two smaller circles to the right) are also designed slightly differently – the two elements are depicted together hosed in a larger oval ring.

If we look at the side, we can see that the layout is the same but the buttons are different (5). They are considerably narrower, missing the small recess in the frame seen in the regular Note 10, designed to accommodate slightly wider buttons.

Of course, we can’t say for sure whether this is indeed the Samsung Galaxy Note 10 Lite or just an alternative design for the Note 10 that won’t ever see the light of day. Galaxy Note 10 and Note 10+ bear the same design and only differ in size, so making the Note 10 Lite that different rises suspicion. Nevertheless, all these circumstantial evidence may very well lead to a new and interesting device. We’ll have to wait for Samsung’s next move. 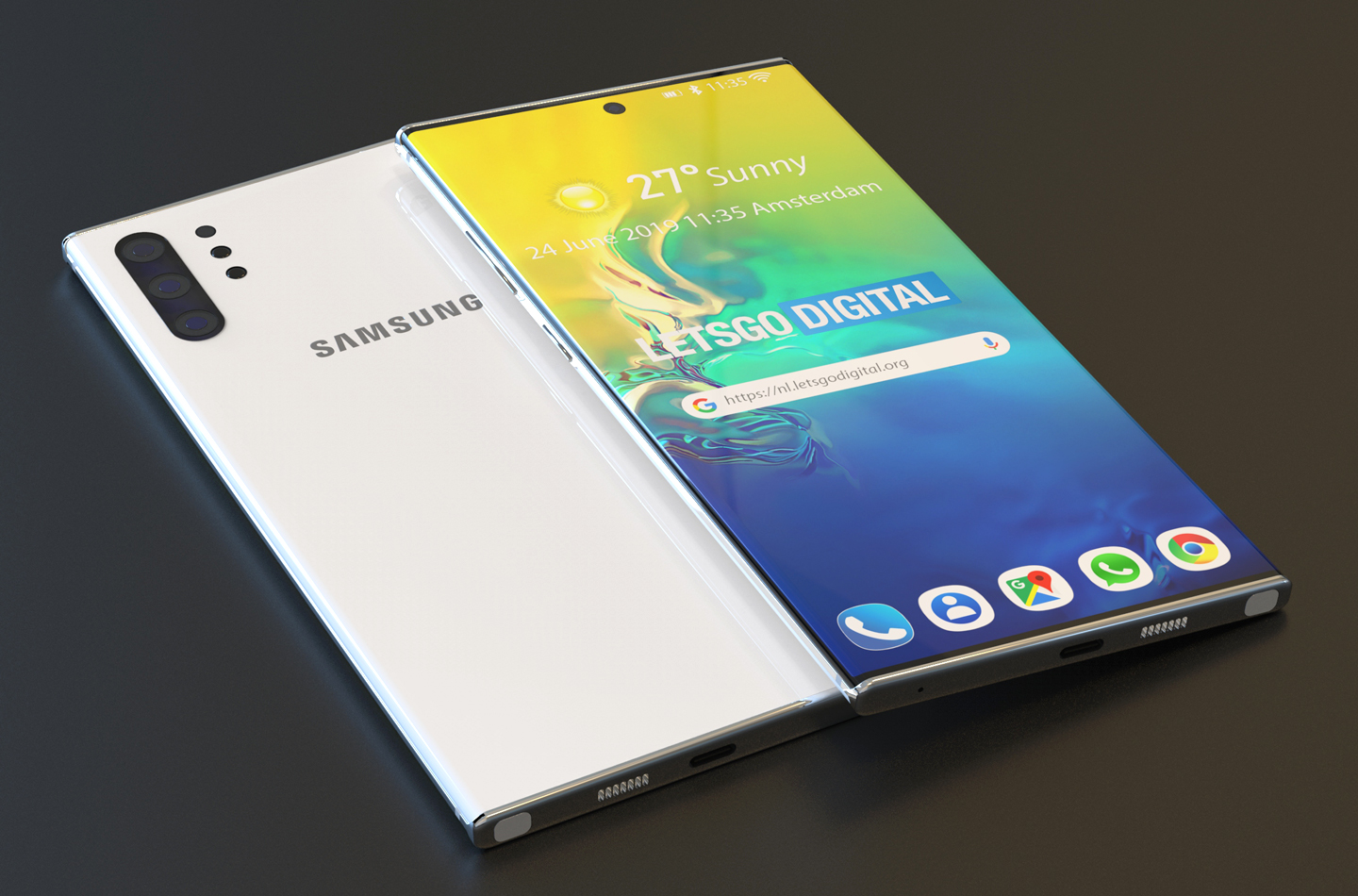 Note to editors: The product render presented in this publication is copyright protected and designed by LetsGoDigital. You may use our pictures for free, but please be so respectful to include a clickable source link into your publication. Thank you very much for understanding.