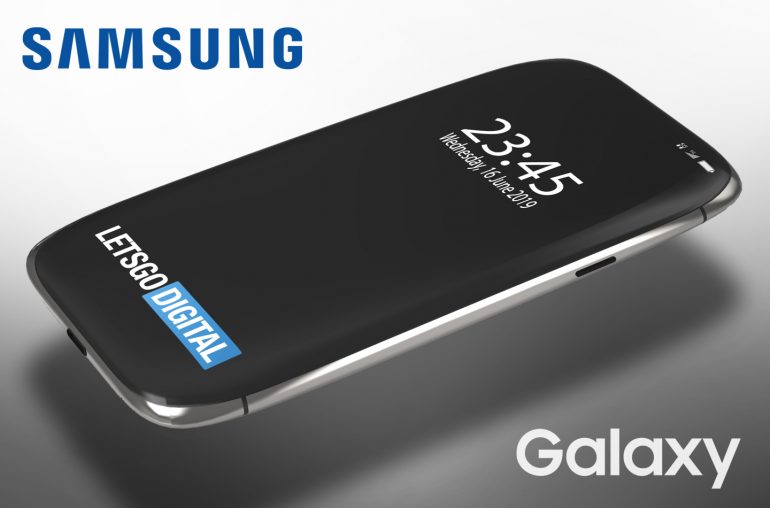 Patent shows advanced Samsung smartphone with a 3D curved screen, on all four edges of the device. The phone also features an under-screen camera.

The smartphone bezels have been drastically reduced in recent years. New solutions have been sought for the sensors and the front camera, such as a pop-up camera, a rotating camera or a hole in the display. However, the developments will not stop here. What can you expect in the coming years?

In December 2018, LetsGoDigital reported on a borderless Samsung smartphone, wherein the four side areas of the device also consist of screen surface. A new patent shows Samsung sees serious potential in such a screen design.

This time the Korean manufacturer has not patented the rounded display itself, the new patent also explains how such a screen can be implemented in a mobile phone. The curved screen goes all the way to the four sides of the device. Could this be the Samsung Galaxy S11? In any case, the device looks very futuristic and comes with new operating options. 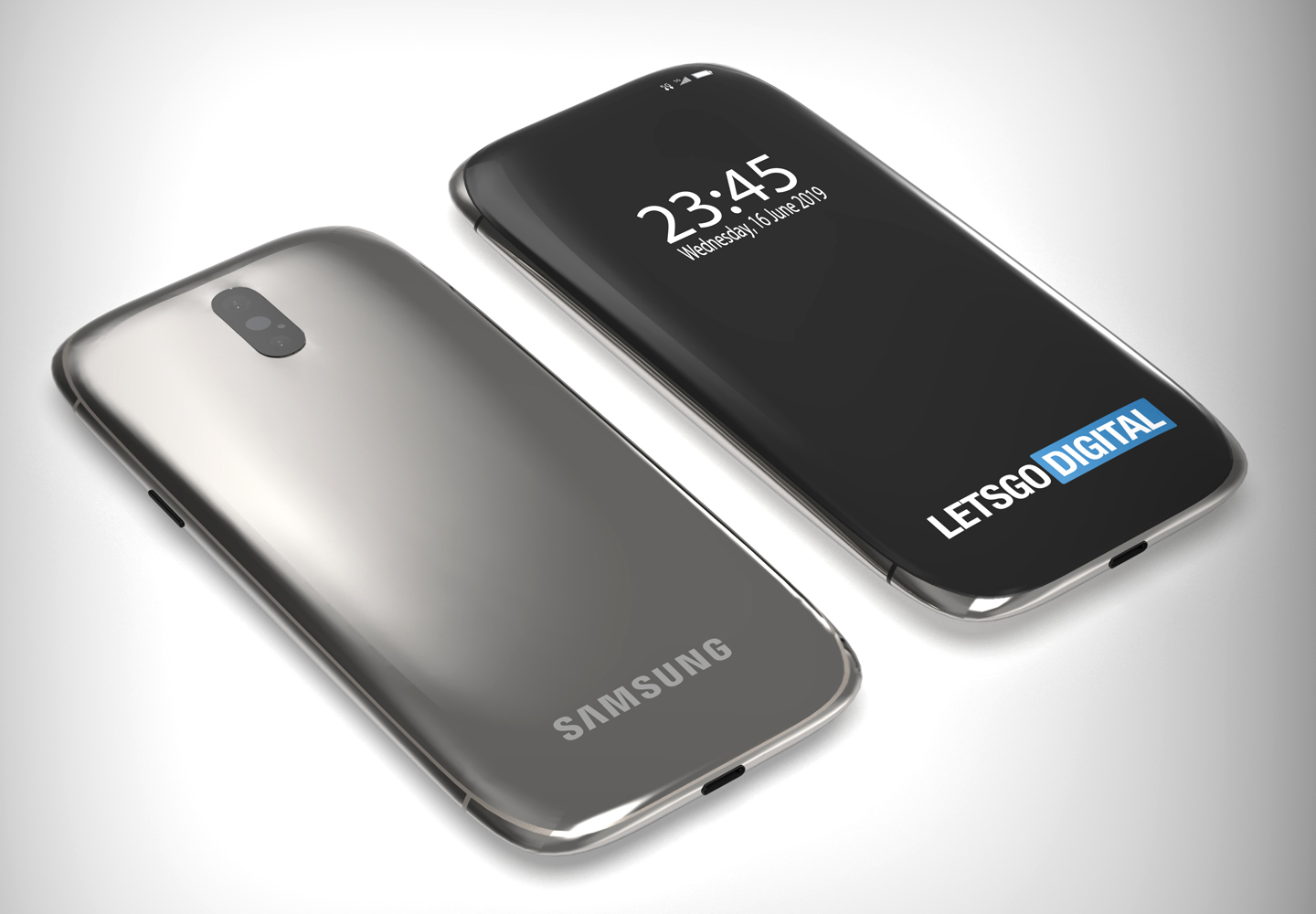 At the end of 2018, Samsung Electronics filed a patent with the WIPO (World Intellectual Property Office) for an “Electronic device with full display”. The patent was requested from America and from Korea, both were published on June 6, 2019.

The patent shows a fairly round-shaped smartphone, with a flat display surface on the front with four curved display modules around it. This creates a 3D curved design. The frame edges are slightly bigger than the display, making the device better resistant to drops and bumps. Two models are shown in the patent, the first model has slightly thicker bezels than the second model.

The back of the device can be made partially of glass, although the patent reserves the possibility of using other materials. Think of metal, so that the housing can also function as an antenna radiator, which benefits the mobile signal. In addition, the glass housing ensures that wireless charging is made possible.

The same 3D curved design is applied on the back as on the front, which means that the smartphone is considerably thinner on the sides and top and bottom than in the middle of the device. The round design should also contribute to a better grip, according to the patent description. 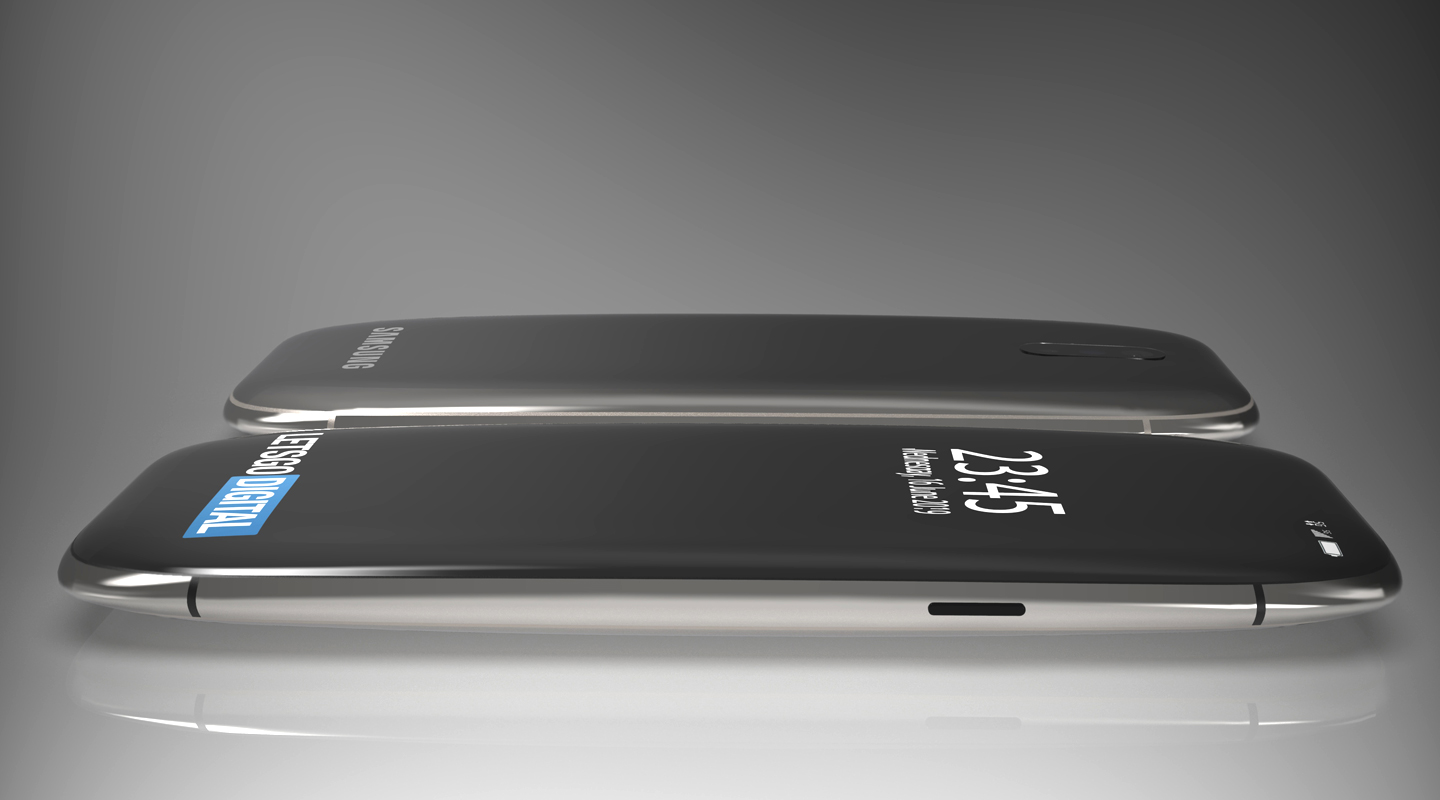 The front camera and associated sensors are implemented in the curved display area. To prevent this curvature causing image distortions, the flat camera module is placed with a tilt. The curved screen ensures that the whole still looks aesthetically good. The fingerprint sensor is also processed under the screen.

The camera system at the rear accommodates several camera lenses, these are implemented in the straight part of the housing, in the middle. On the patent sketches they are placed vertically. However, the final design may differ from the sketches, after all it is not a design patent, but a so-called utility patent. In other words, it is about the technological innovation, the usefulness and the advantages of the invention.

Although the patent does not elaborate on the additional operating options, it is clearly stated that the curved display areas will also offer additional functionality. The previous patent already showed several examples of this. For example, the side can be used to display frequently used app icons. The top and / or bottom can function as a multimedia player. 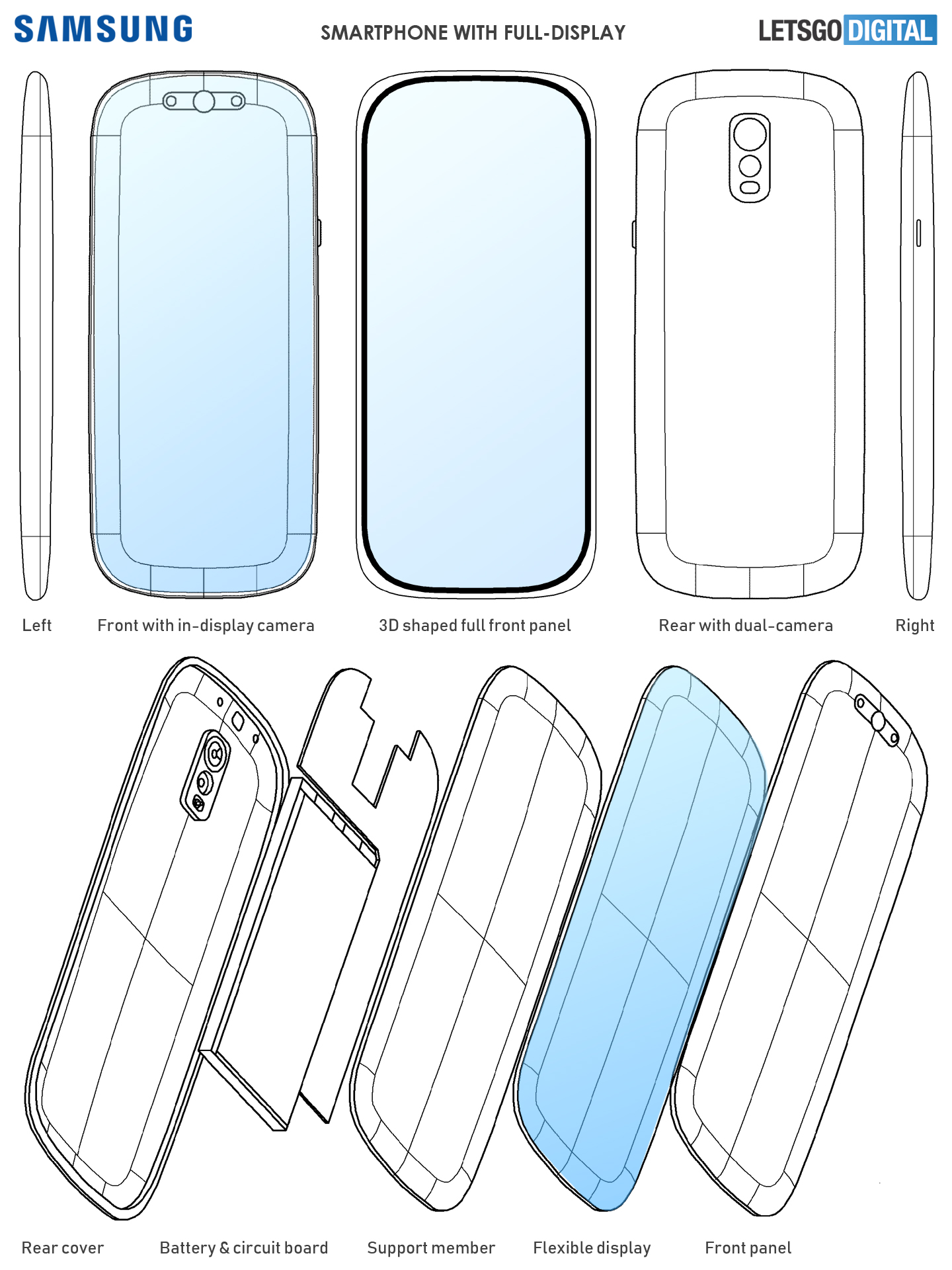 It is obvious that Samsung wants to equip its future smartphones with cutting-edge screen technology. After all, the display manufacturer has been paying extra attention to the screen for years. The Galaxy Note and Galaxy S models both feature an edge display for a long time, which contributes to a stylish appearance and extra functionality.

With the Galaxy S10 launched earlier this year and with the Galaxy Note 10 (Pro), which is expected later this year, the screen on the left and right goes all the way to the edges. With the patented smartphone, the edges on the top and bottom are also curved, creating a 3D curved screen.

You may assume that the final design will have more cameras than shown on the patent illustrations. For example, the S10 Plus features three cameras on the rear and with the 5G model there is even a fourth camera added. However, the 3D renders produced by LetsGoDigital are purely based on the patent and are for illustrative purposes only. 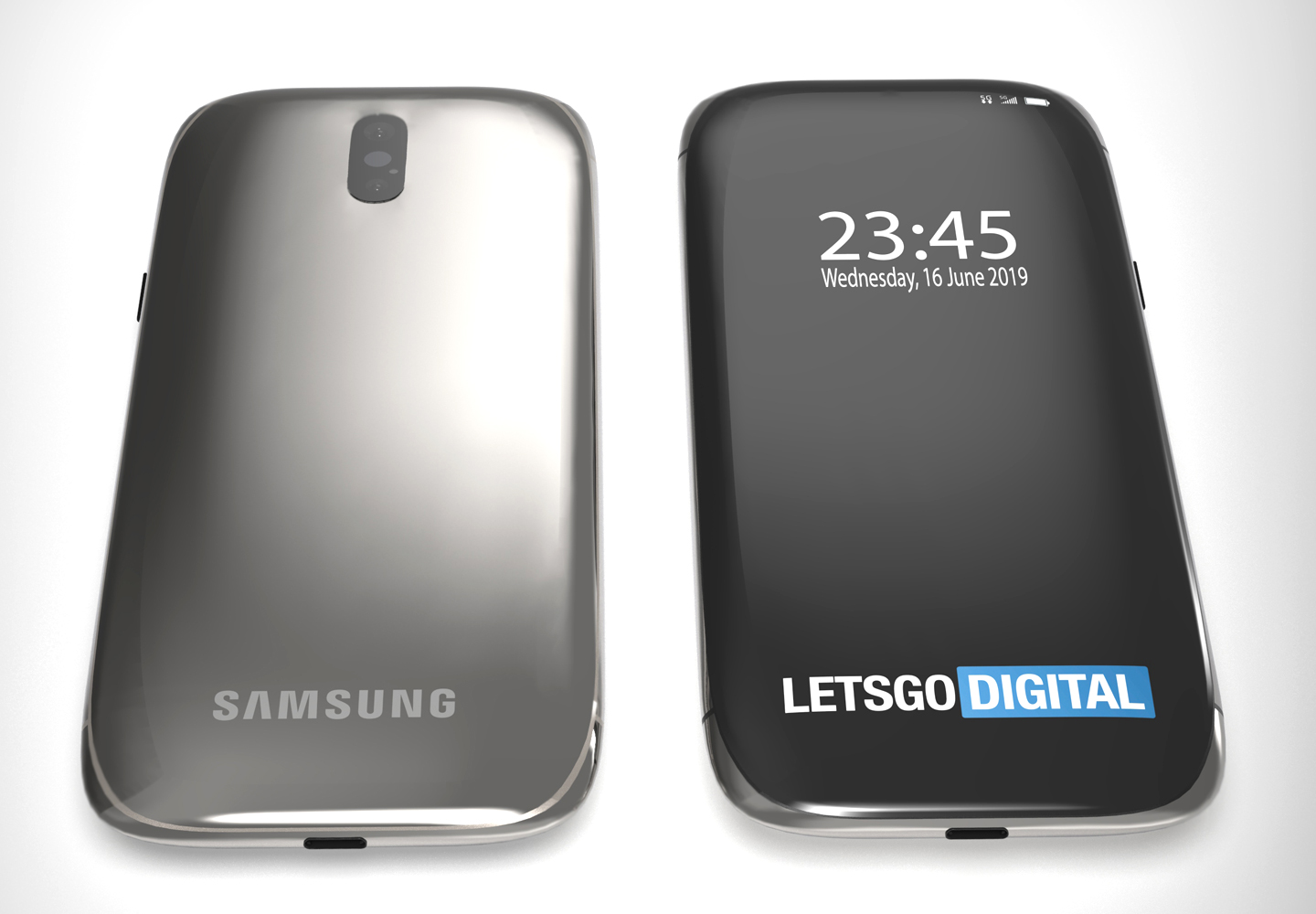 It is difficult to predict when the Korean manufacturer will introduce such a design. You may assume it will be a 5G smartphone. After all, Samsung has already introduced the Galaxy S10 5G.

As technological developments follow each other at a rapid pace, a device like this could be released in just a few years from now. It is even possible that Samsung will use this design for the Galaxy S11, which is expected in the first half of 2020.

However, it seems more likely that we have to wait another year, after all, the S10 has already had a considerable design update. Therefore there is a realistic chance that the Samsung Galaxy S11 will have many similarities with the current S10 model. The Galaxy S12 will probably get a more significant design upgrade, by the time we are already in 2021. 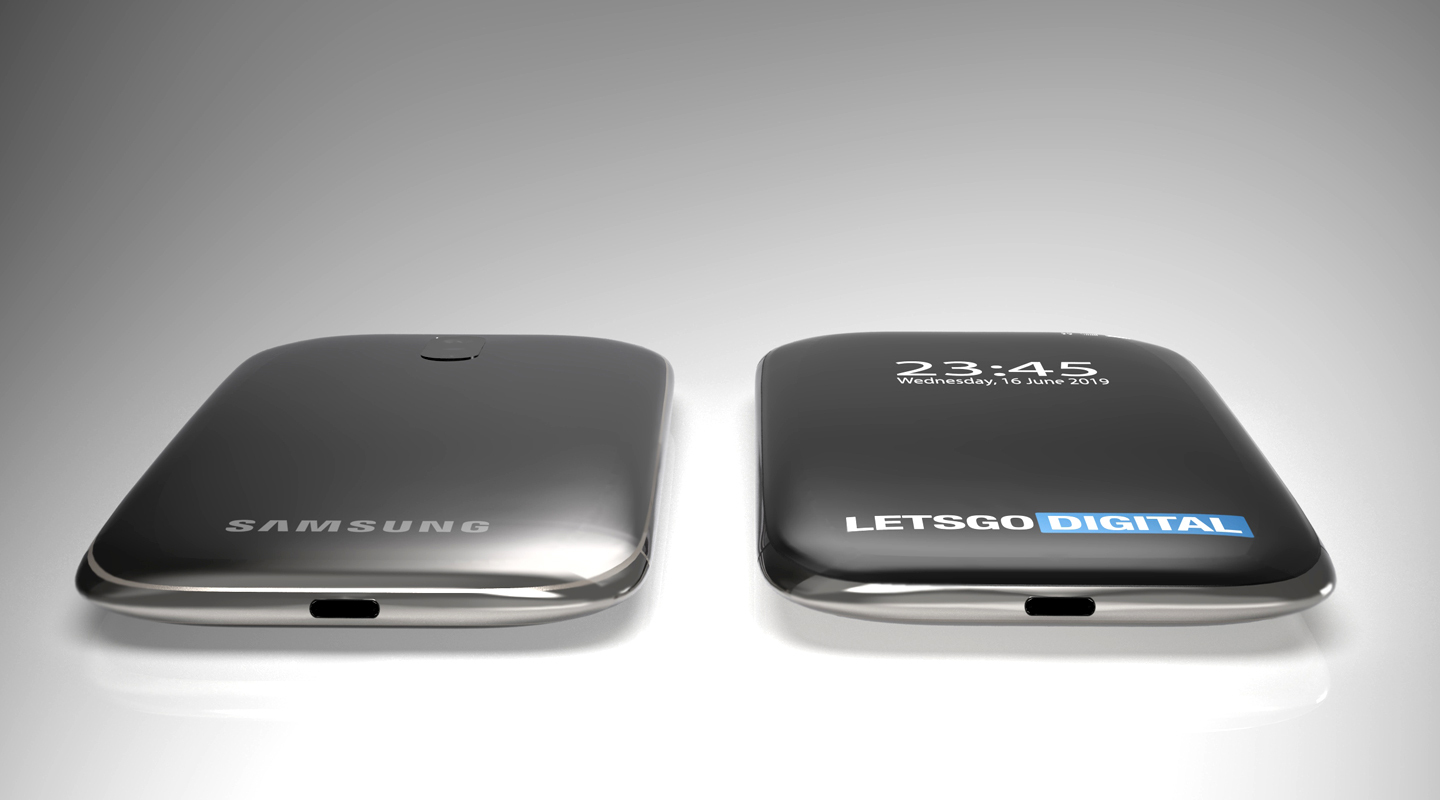 If the company wants to remain market leader, it will have to implement more technological highlights in the coming years. Certainly in view of the fact that Chinese manufacturers are able to demonstrate innovation after innovation, such as Huawei, but certainly also Oppo and Xiaomi. Both smartphone manufacturers were among the first to introduce a full screen smartphone last year.

The in-display fingerprint scanner was also found on Chinese devices much earlier than on Galaxy smartphones. And although a Galaxy S10 5G model has been launched, you can still not buy a Samsung 5G smartphone in Europe. Here, too, Oppo is ahead of the Koreans, thanks to the Reno 5G and the collaboration with Swiss telecom provider Swisscom.

It also looks unlikely that the Chinese are planning to take gas back. Oppo and Xiaomi recently showed a demonstration video of a smartphone with an under-screen camera. It will probably not take years before these prototypes are developed into a final production model. Although similar technology is also used in the patented Samsung model, the question is whether the Koreans can keep up with the fast pace of the Chinese.

Samsung probably wants to continue to distinguish itself through its curved screen technology, only the future can tell whether this is sufficient. After all, several Chinese manufacturers would be more than happy to take over the No. 1 position of Samsung.

Here you can take a look at the patent from Samsung. 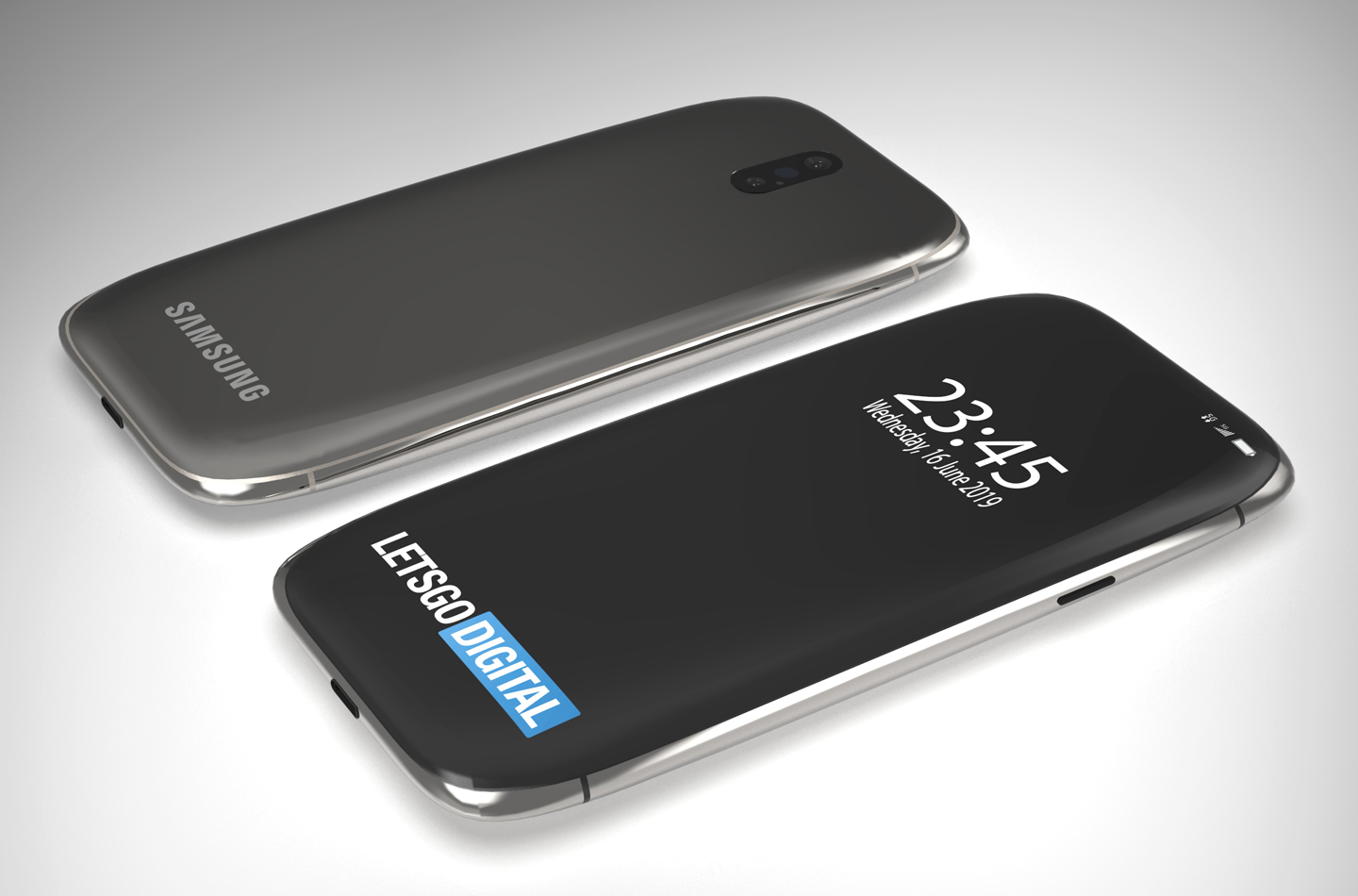 Note to editors: Feel free to use our high-resolution 3D renders to enhance your online publication. Please note that producing 3D product visualizations takes a lot of time and effort. You can use our artwork for free, as long as you include a clickable source link into your story. Thank you very much for understanding.