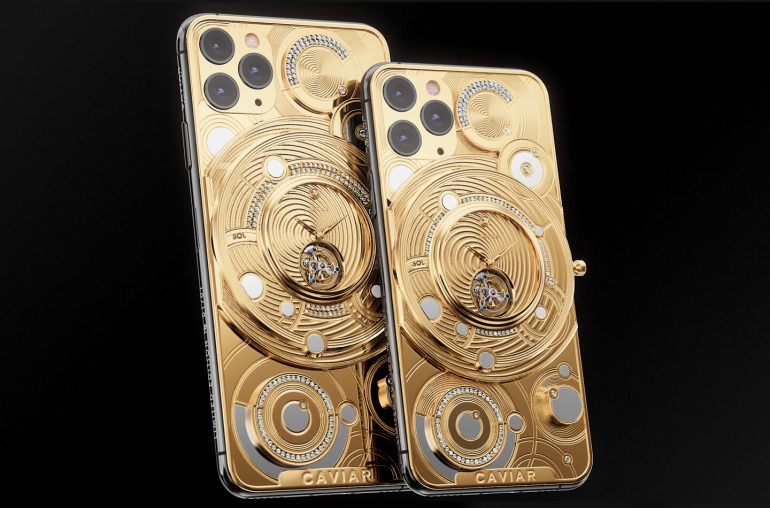 Caviar did it again… the Russian manufacturer has announced another series of Limited Edition iPhone 11 Pro devices. Earlier this month Caviar also released a special Steve Jobs edition and 12 other luxury models made out of titanium, leather and gold. This time the company added four Limited Edition smartphone models to its Discovery Collection. The top model, called Solarius, is decorated with half a kilogram of 18 carats gold and no less than 137 sparkling diamonds. 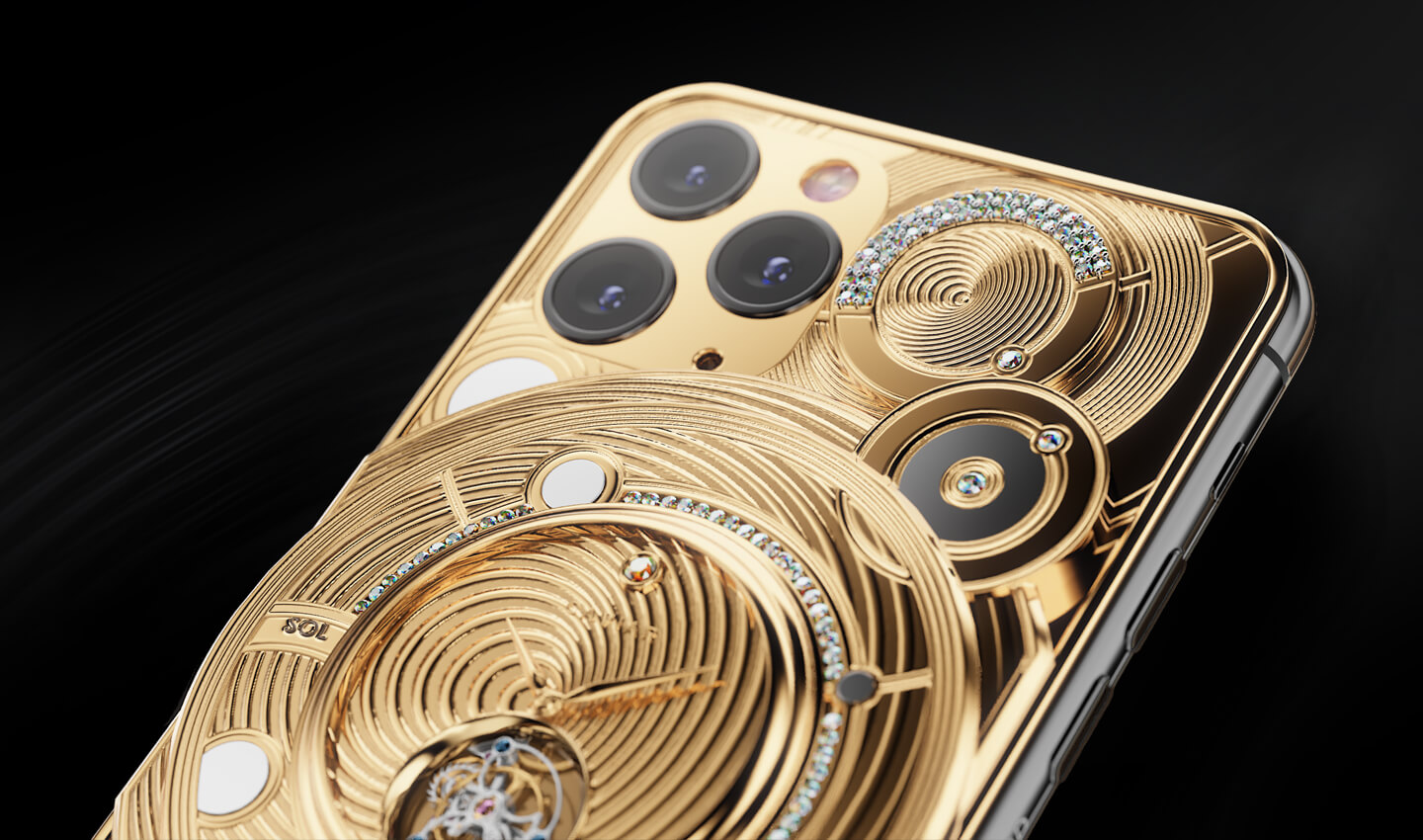 The Caviar Discovery Solarius is a shiny and heavy smartphone. It feels like you have a true bar of gold in your hands. The back is richly decorated with yellow gold that symbolizes the sun. The company claims it’s only smartphone model in the world for which 500 grams of 750-content gold was used.

The concentric circles of gold and diamonds and the constantly moving tourbillon watch symbolize the eternal life that the sun gives to our planet. Into the watch face that is inserted in the iPhone’s body, a precious yellow diamond is encrusted, which is called ‘a sun stone’. 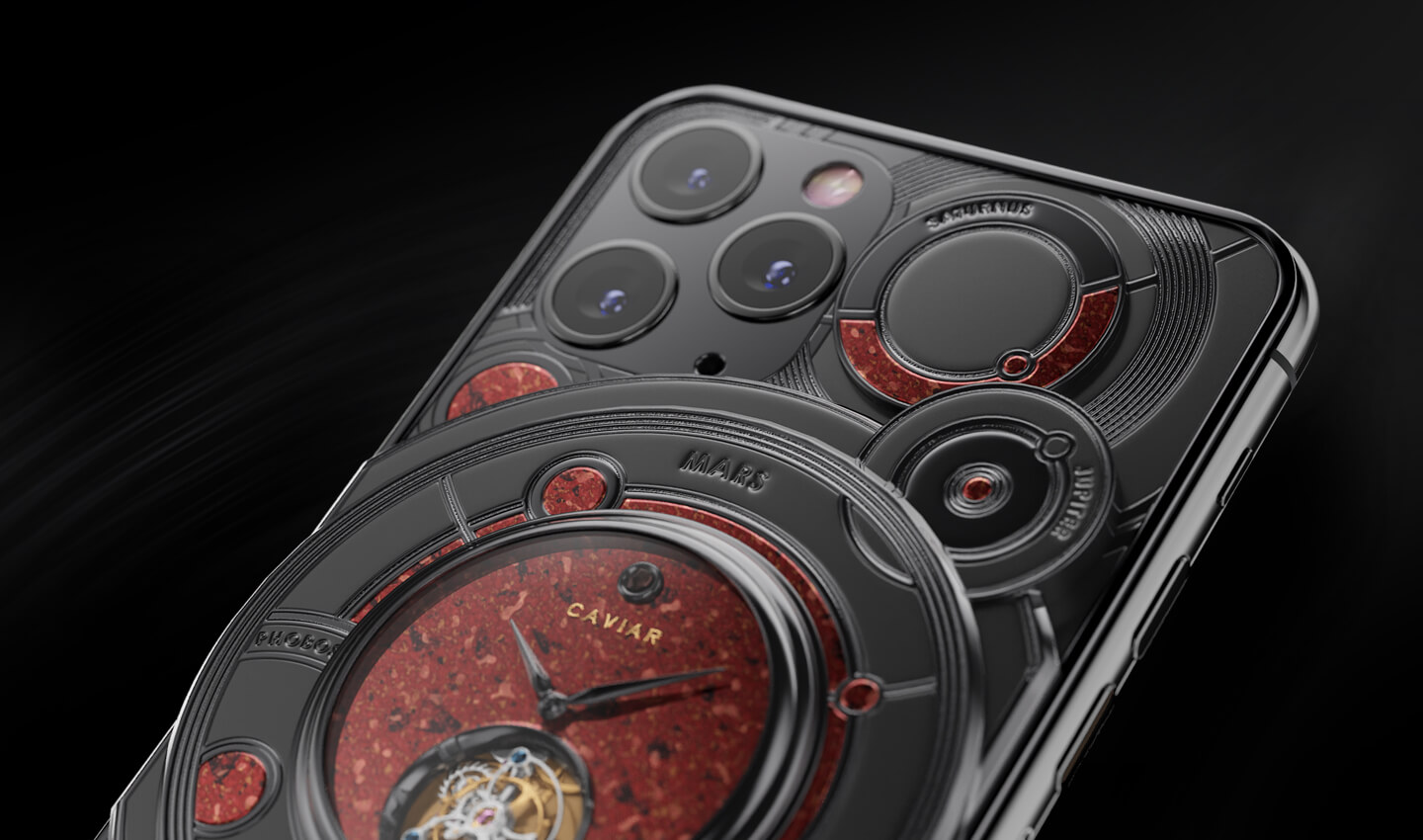 The Russian manufacturer introduced three more smartphone models, all of which include a built-in tourbillon watch. The first one is called iPhone 11 Pro Mars. This special edition is made out of blackened titanium with bright accents of composite stone that resemble the surface of the Red Planet. A real piece of the planet Mars is located in the 12 o’clock position.

The pieces of Mars were mined from the rests of meteorites that are formed on Mars and have fallen on Earth. All the fragments of alien bodies are certified by the Expert Gemological and Mineralogical Consultation of the Mineralogical Museum of the Russian Academy of Sciences. 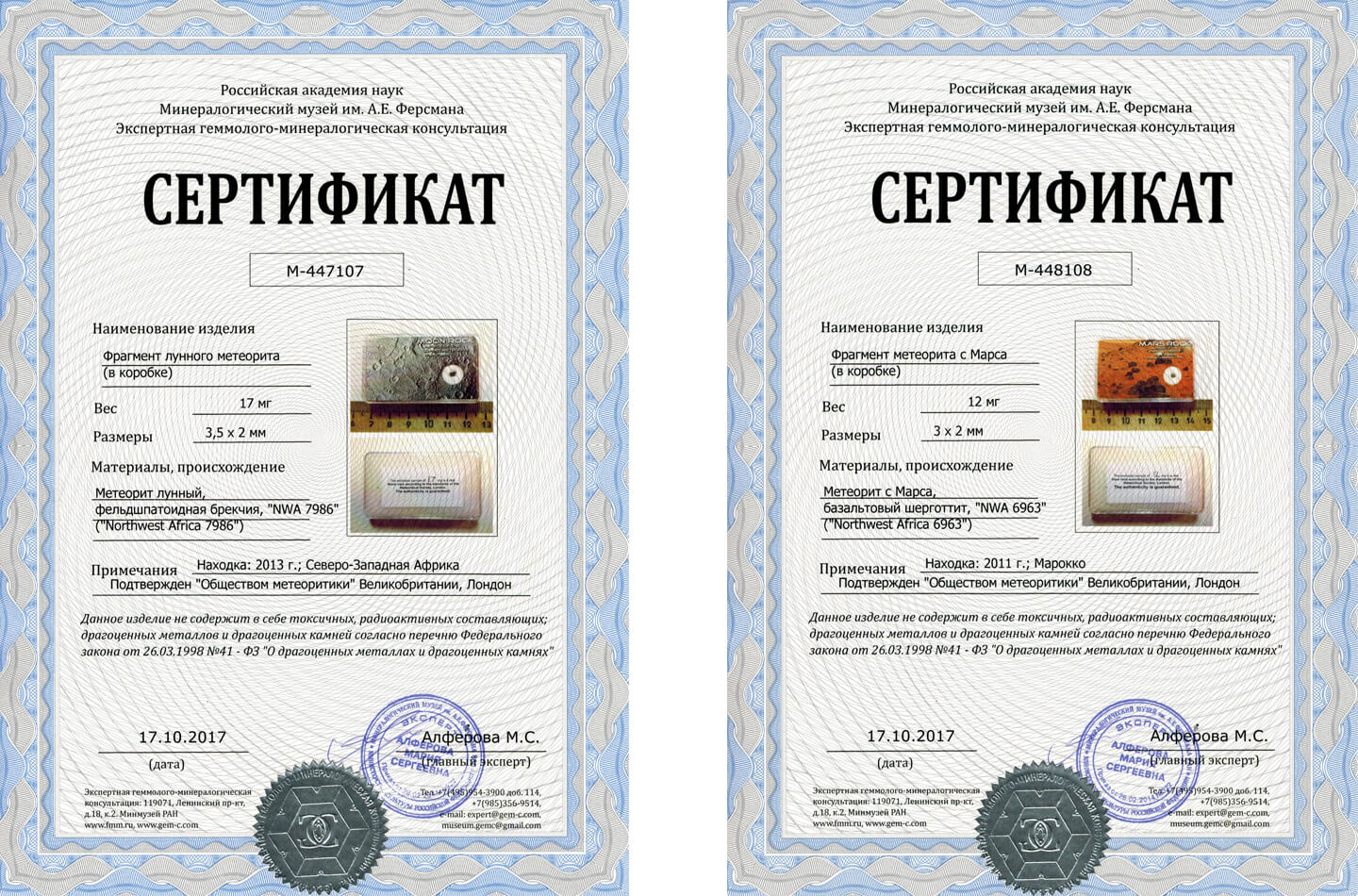 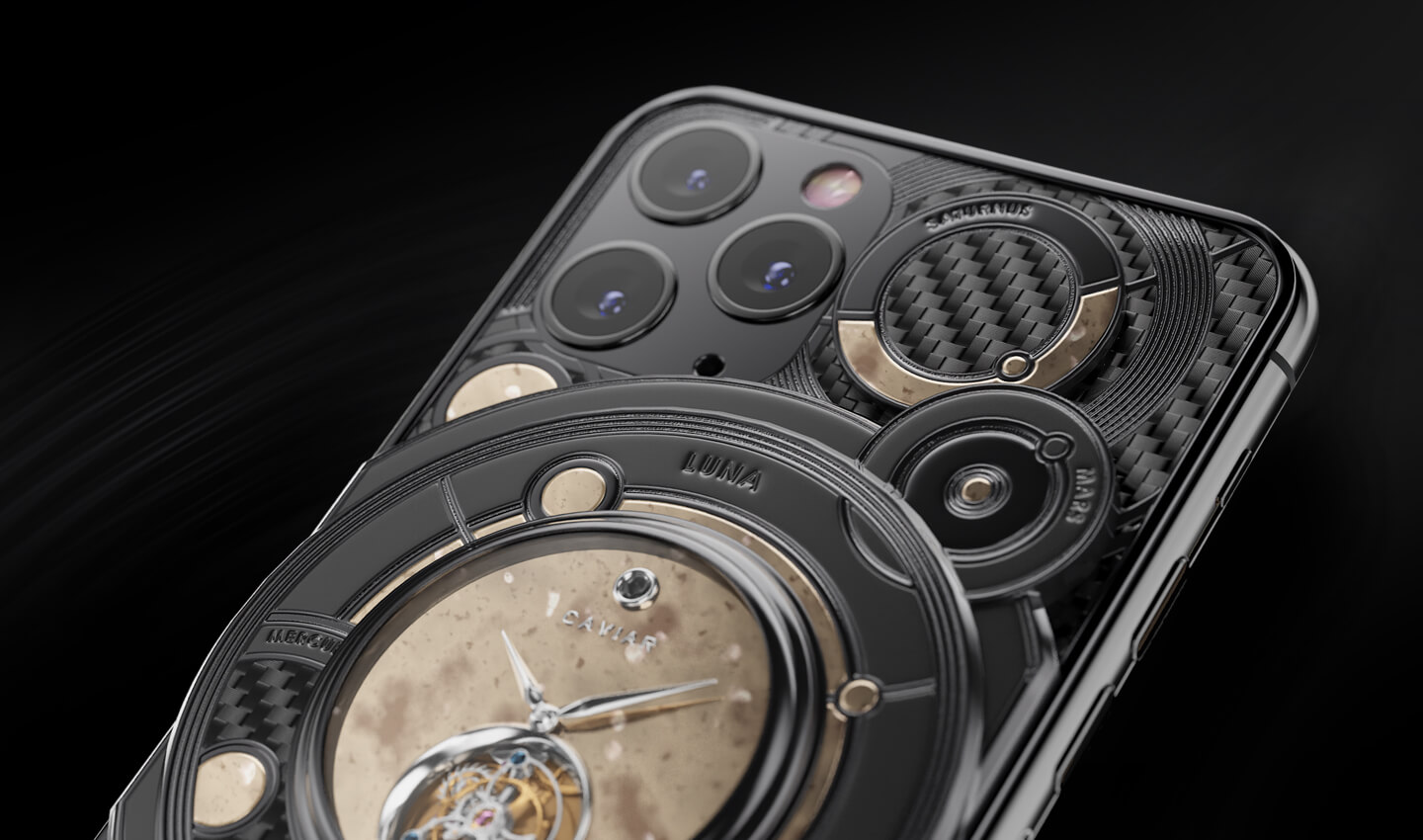 The Luna edition refers to the moon. This mysterious smartphone is made out of blackened titanium and carbon with engraved names of the space objects in Latin. Inserts of cream composite stone resemble the surface of the Moon. In addition, a true piece of the moon is placed inside the tourbillon watch in the 12 o’clock position. 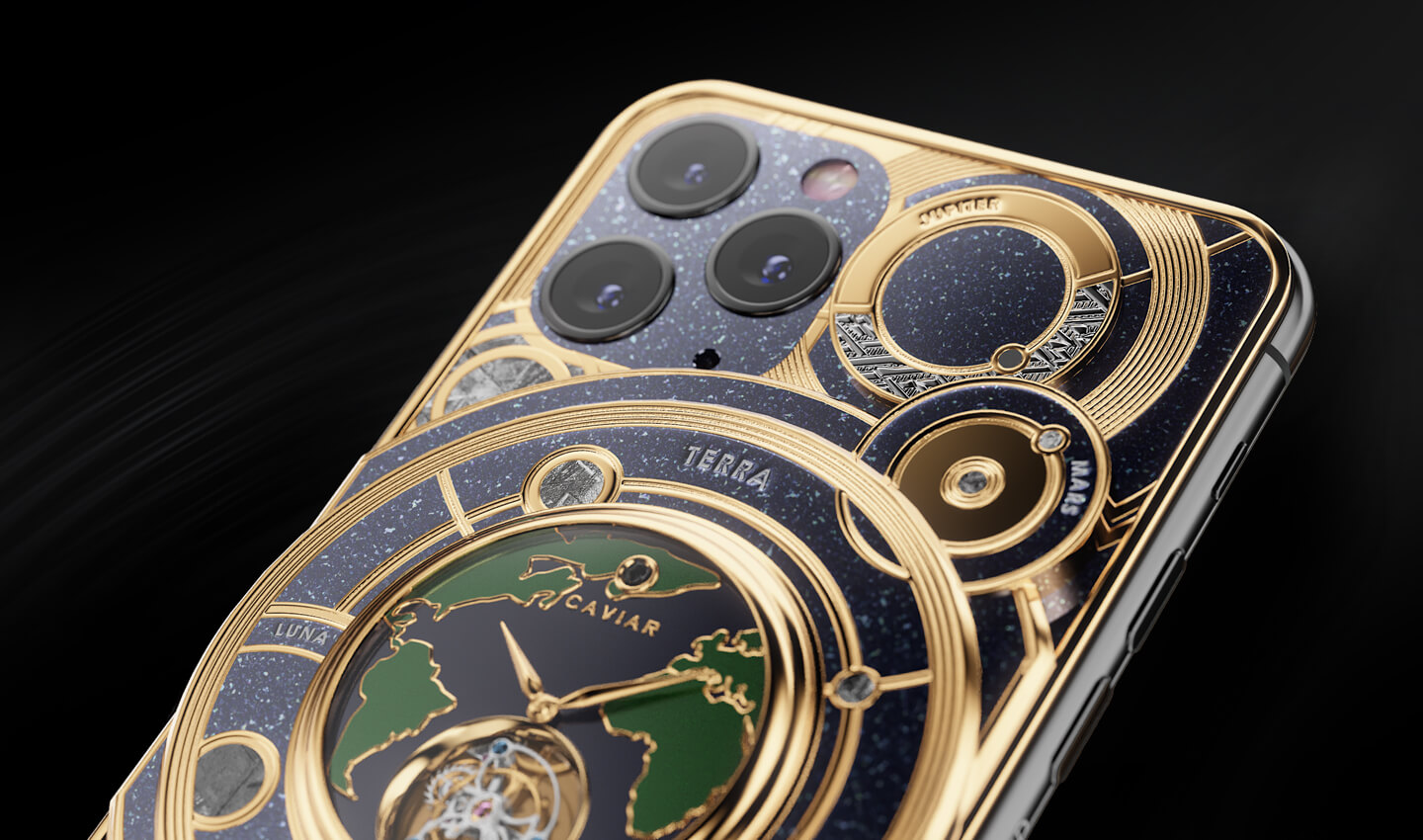 The Discovery Terra Edition is created in honor of planet Earth, with many forests and mountains, water bodies and illimitable lands. The design of the smartphone’s body presents a globe surrounded by the endless cosmic space with its orbits, systems and star clusters. These details are decorated with pure 18 carats gold.  In addition, a piece of the Tsarev meteorite is placed at the center of the watch face.

In addition to the new smartphone models Caviar also launched a series of Limited Edition smartwatches. Including the classic Discovery Meteorite smartwatch, the mysterious Discovery Moon watch and the powerful Discovery Mars smartwatch. Visit the website from Caviar for a complete overview of all available models.