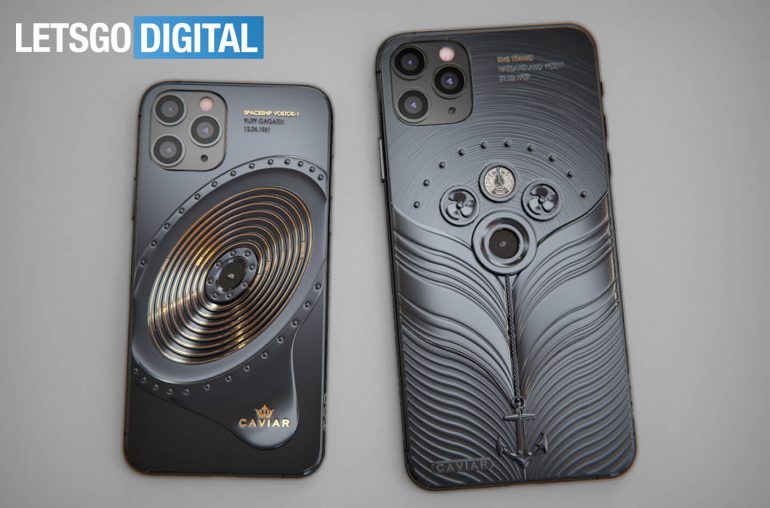 Spectacular iPhone 11 Pro limited edition includes true fragment of the Titanic. Caviar releases a second even more exclusive model that includes a small piece of the Vostok 1, the first manned spaceship that made a flight to space.

The Russian brand Caviar just introduced a series of new luxurious and exclusive smartphones, based on the recently released iPhone 11 Pro from Apple. The Discovery Series consists of two Limited Edition models, each of which are inspired by a legendary object. The first model contains real particles of the Titanic while the second model is complemented with a true fragment of the Vostok 1 spaceship. 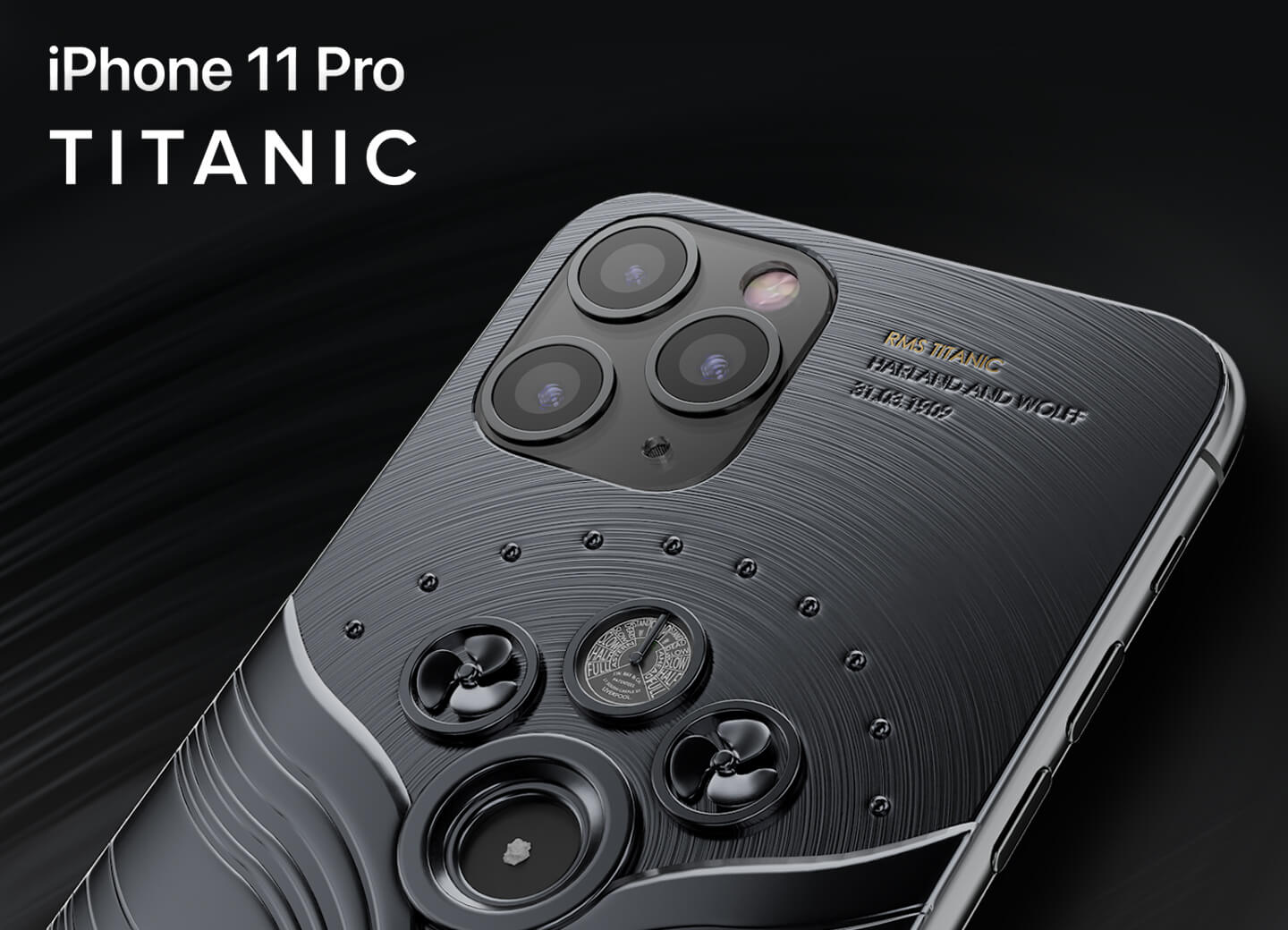 In 1912 the giant transatlantic liner Titanic went down after falling foul of an iceberg on its first tour. This news became world famous. Today, after over a century, Titanic is still staying at the depth of the North Atlantic. Every year, time inflicts more damage to the sunken ship, over time the ship will disappear completely.

This motivated the designers from Caviar to get their hands on a real fragment of Titanic and include it into the luxurious design of iPhone 11 Pro. Besides a true part from the ship, the body got a relief background, reminding the stormy ocean waters and is decorated with an image of an anchor lowered to the water as well as two rotating metal valves. 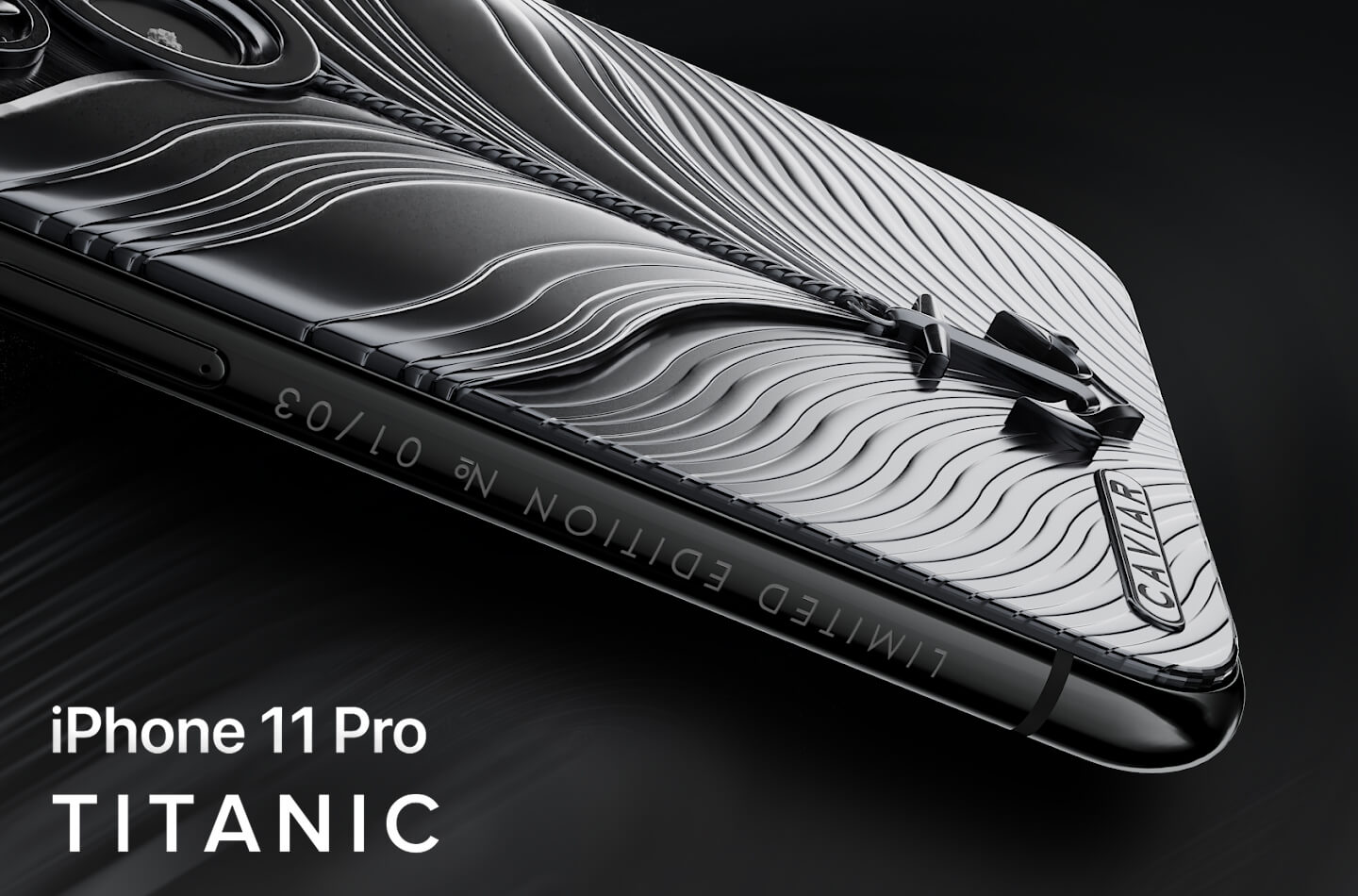 Into a specific ‘reservoir’ in the upper part of the body, the piece is placed that was captured from the ship, which has been staying in the ocean depth for the last 107 years. On the body, there is an inscription indicating the manufacturer of the legendary ship and the date of its launch: ‘RMS Titanic Harland and Wolff 31.03.1909’.

This new masterpiece by Caviar is made out of black titanium. It is needless to say that this is an Limited Edition smartphone – just 10 copies are available. Customers can choose the iPhone model of their liking, there are three memory options per model. Prices range from $ 7.270 USD for 64GB iPhone 11 Pro up to $ 8.440 USD for 512GB iPhone 11 Pro Max.

You may think the Titanic edition is exclusive, but the Vostok 1 Edition knows how to surpass. The Vostok 1 was the first spacecraft that made a manned flight to space. In 1961, Yuri Gagarin went into space on this Soviet spaceship. For many it was a dream come true, a dream of ‘believing in’ and ‘reaching of’ things that are extremely hard to achieve.

This unique iPhone 11 Pro Limited Edition comes with a true fragment of the spaceship Vostok 1. This small piece has really been in space! Unbelievable right? The phone has a black titanium back cover, it’s design interprets the scheme of the solar system. It looks amazing. 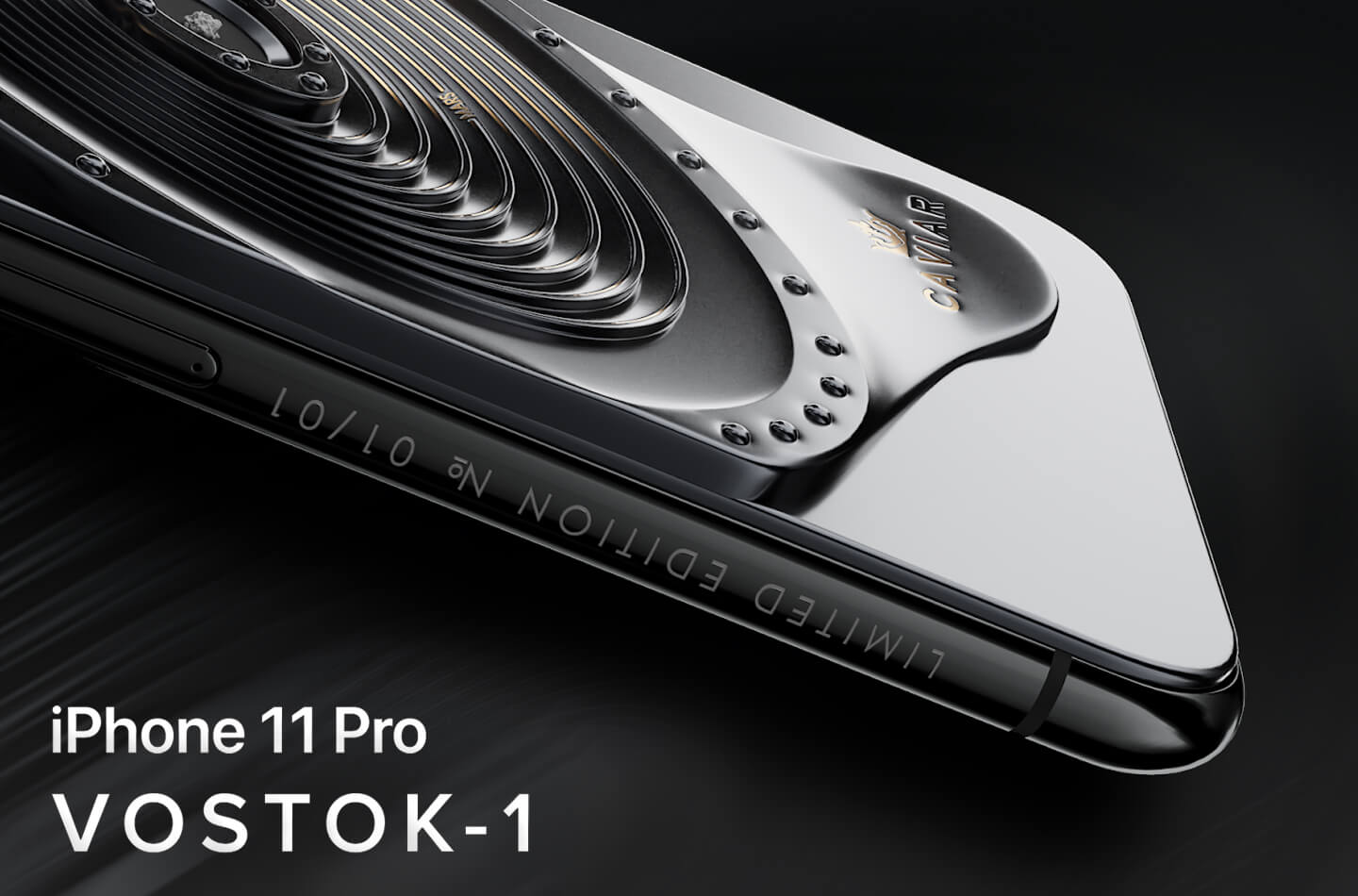 On the body, the memorable inscription states the date when Vostok 1 went into space. As it was incredible difficult to recget hold of such a fragment, only single copy is available. The customer may choose the iPhone model of his or her liking, there are three memory options per model. Prices range from $ 33.620 USD for 64GB iPhone 11 Pro up to $ 34.790 for 512GB iPhone 11 Pro Max.

A spokemen from Caviar said: The new collection is dedicated to the search for legendary treasures not only in all corners of the world, but also in the space and on the ocean bed. The life principle of Caviar is a restless non-stop search for the best, the movement to the ideal, the striving for perfection even if it is needed to neglect the limits of the possible for it!

Caviar has been a lot in the news lately with spectacular new models, all of which incorporate very exclusive and unique elements. Earlier this year the company released a foldable phone concept of an dual folding iPhone, decorated with 90 beautiful diamonds. Not much later the Russian manufacturer released the Apollo 11 Limited Edition, based on the iPhone 11 Pro. This phone can withstand fire and is both water and frost resistant. 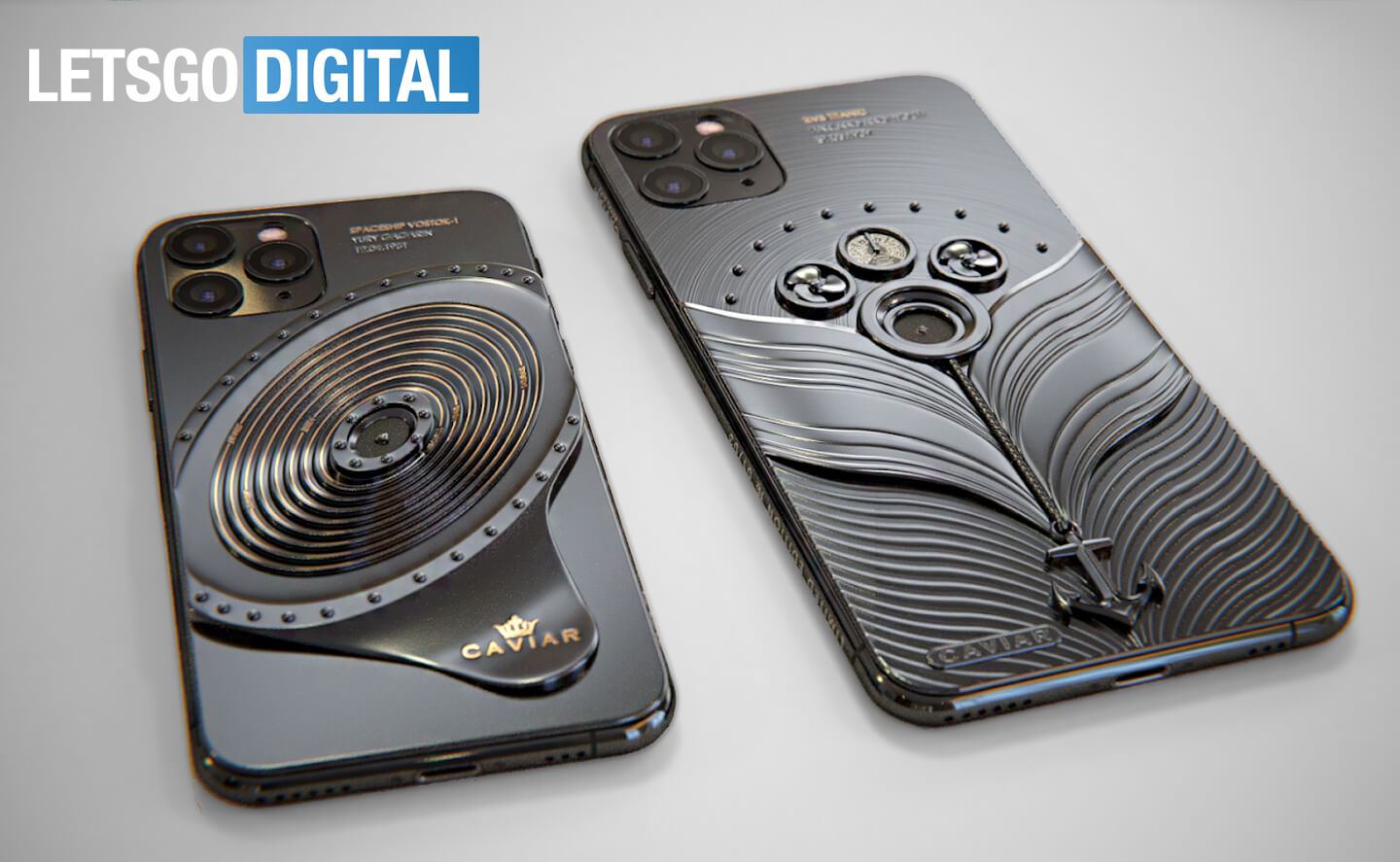 Last month Caviar showed off five more iPhone 11 concepts, in its Space Collection series. Each of these models were decorated with various items from space. Including a true piece of the moon and a meteorite part. The company informed us that all of these unique limited edition smartphones were sold out on pre-order, even before the start of sales of Apple’s latest flagship smartphones. 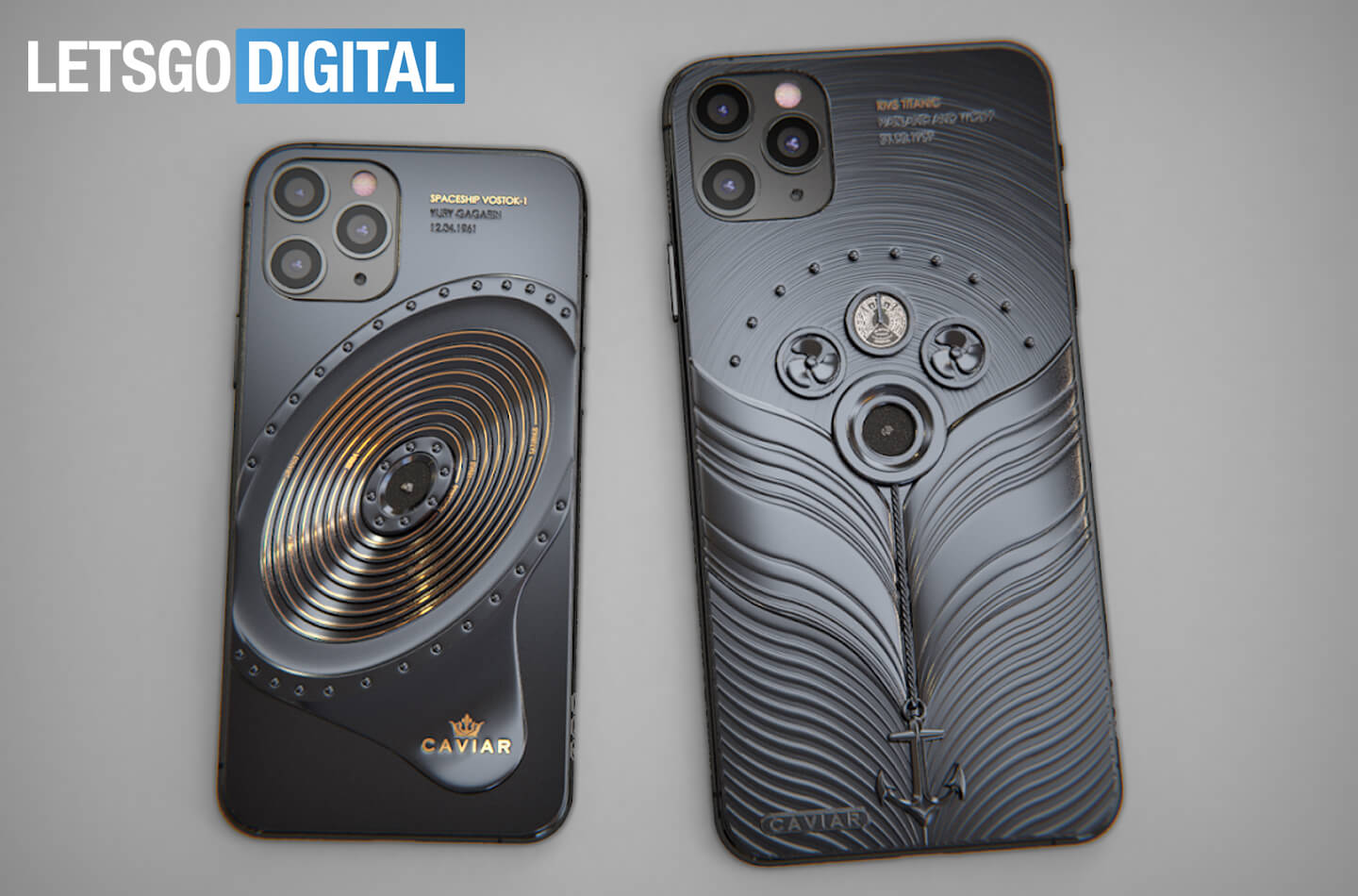