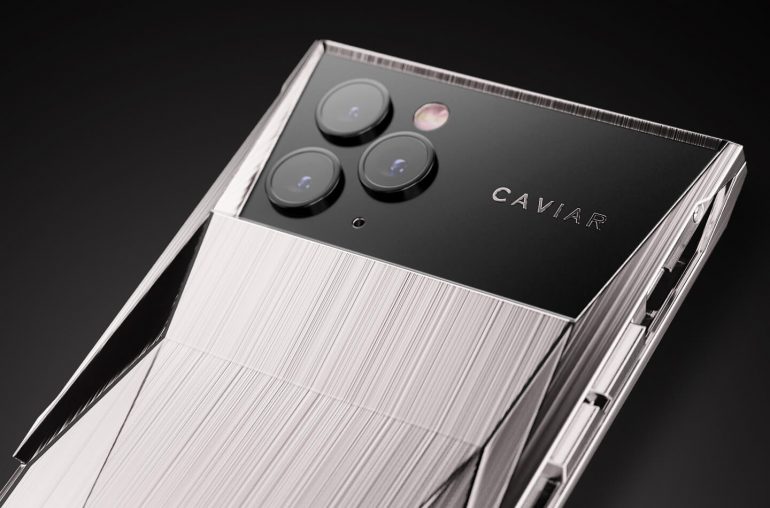 Caviar turns your regular and boring phone into a science-fiction masterpiece! This iPhone 11 Pro Limited Edition is as tough as it is bizarrely looking.

Tesla Cybertruck made the new in a typical Elon Musk fashion and despite all the marketing tricks and broken glass, there’s no denying the fact that this vehicle is just… different! It reminded us that in the modern post-industrial age things tend to look the same. And Elon is well aware of the fact, using it to Tesla’s advantage. Classic! Cars look almost the same nowadays, TV sets, stereo, watches – the list goes on and on – and smartphones are one of the most striking examples!a

You have your typical glass sandwich with a metal frame, screen on the front, cameras on the back and if not for the brand logos, you just can’t tell if this square thing is a Samsung, Huawei or an Apple. Apart from being blatantly unoriginal, most modern smartphones are fragile as Cinderella’s crystal shoe. And that’s where guys like Caviar enters the stage. Today we’re lifting the curtain for another masterpiece, inspired by Tesla’s Cybertruck – believe it or not – and this device is as tough as it is bizarrely looking.

Caviar took the iPhone 11 Pro as a base platform for the project and turned it into something entirely new, at least on the outside. The design is extremely durable and all the lines and angles nicely steer the imagination toward the infamous Cybertruck. The device uses a titanium body with steel frame elements around the edges – making it well equipped to face any extremes. 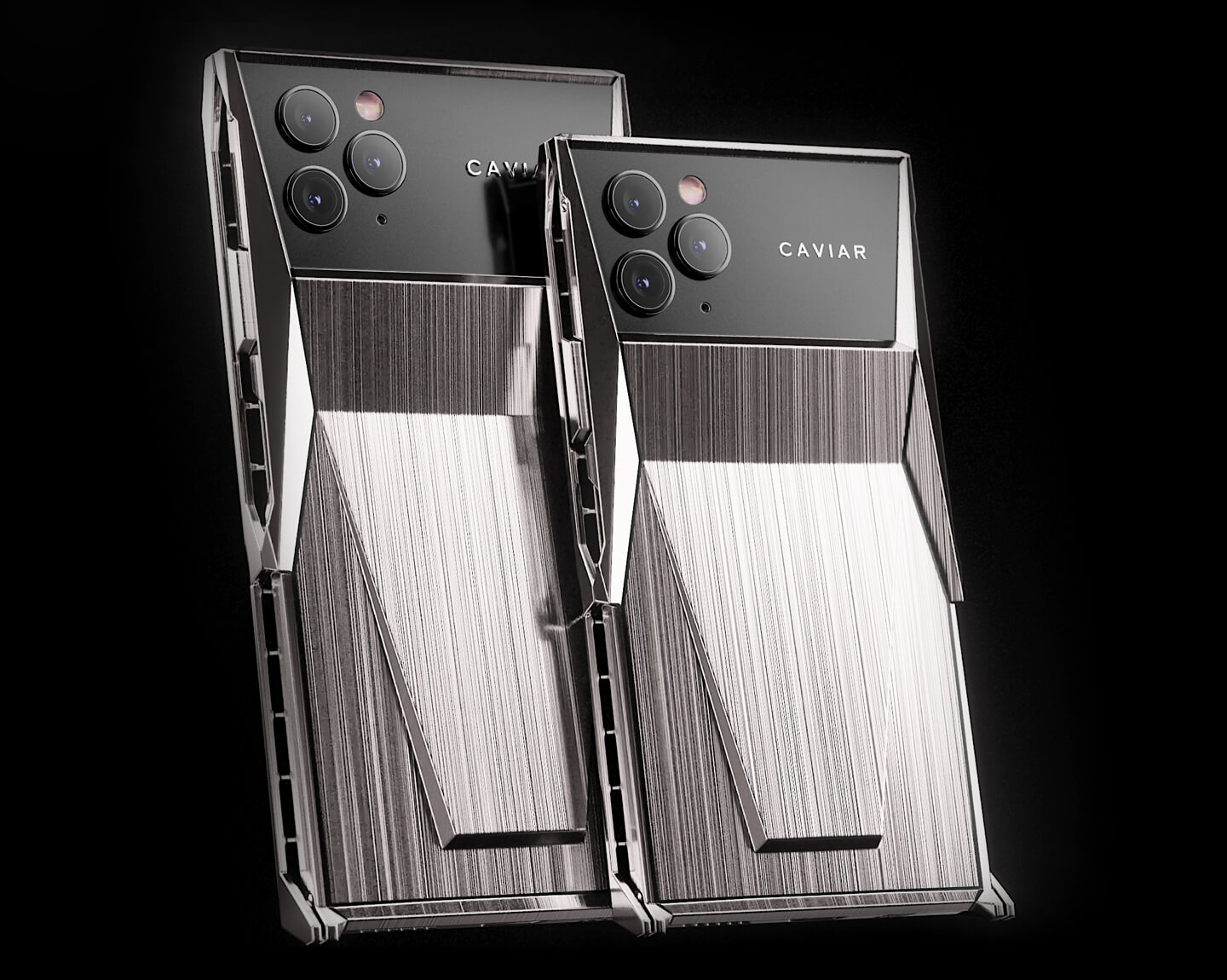 Just like a medieval knight, this iPhone 11 Limited edition can lower the vizard of its helmet and protect the precious screen. It’s an ingenious solution to a very common problem – despite all Gorilla Glass treatment, most displays remain vulnerable to scratches and shattering. The foldable titanium cover of the iPhone 11 will take care of all this and won’t hinder user experience either – after all, when you’re using the phone, you pay attention and nurture the device, and when it’s in your pocket or bag, there’s no real need for the display to be exposed.

The cover unfolds at two points resembling the way Cybertruck operates its back cover to show the storage space. When you open and fold the screen protector, you can use it as a stand giving extra functionality to the rugged design. The back of the phone follows the same industrial lines and design philosophy – a mixture of durability, futurism, and style.

Caviar will produce 99 units of this unique Limited Edition smartphone and there will be a choice for the base platform – either the iPhone 11 Pro or the top Pro Max model. Internals are practically the same as those found in the regular models as well as the storage options – 64GB, 256GB, and 512GB. Prices start at $ 6000 for the 64GB version and go up to $ 13,600 if a 512GB iPhone 11 Max Pro is your piece of cake.

The iPhone 11 Pro and Pro Max differ in size – the Pro model has a 5.8-inch Super Retina XDR display, while the Pro Max is equipped with a 6.5-inch screen. Both phones use a triple camera system with an ultra-wide-angle lens, a wide-angle lens and a 2x telephoto lens. The devices are also water proved.

Strangely enough, this is not the first time Caviar draws inspiration from Tesla while designing a phone. The iPhone X Tesla Edition was released two years ago, equipped with a gold-framed solar panel on the back and a Tesla badge. The Russian company has also released numerous Limited Edition devices based on the iPhone 11 Pro, including an all gold iPhone and an iPhone 11 Pro Max with a piece of Steve Jobs’s turtleneck woven into it. We also had our own unique golden Limited Edition made last year, based on the Samsung Galaxy S10 to celebrate LetsGoDigital’s 20th anniversary. 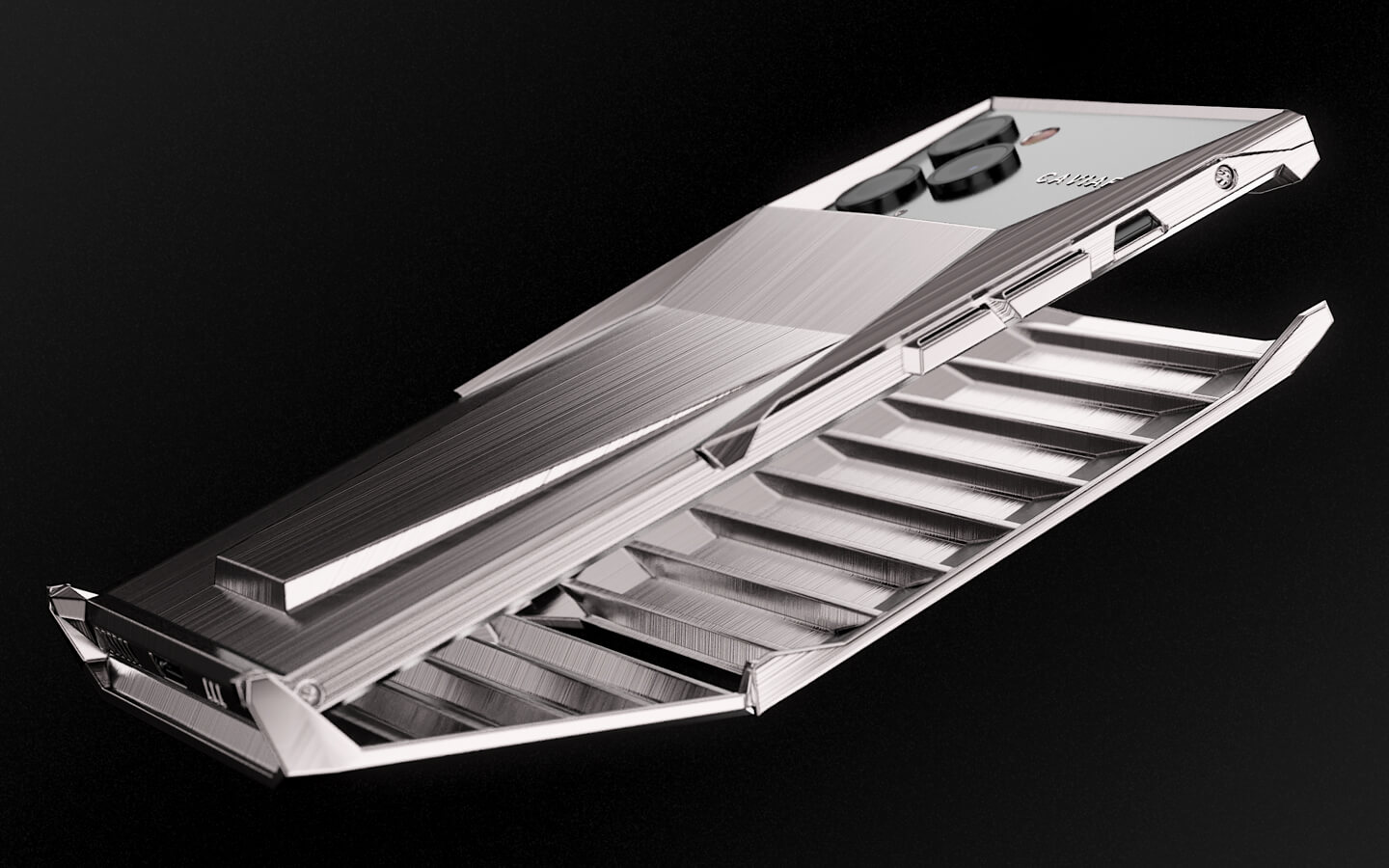 Tesla pushes the boundaries with the Cybertruck

You’re probably familiar with Tesla motor company at this point – after all it started the electric revolution now most of the big car manufacturers follow and preach as their own. And while Tesla cars were all about high performance, low maintenance cost and futuristic Autopilot features, Cybertruck took everything a step further – offering clean lines and flat panels of rolled stainless steel, unique look and durability, maintaining high performance at the same time.

“More versatile than a truck, faster than a sports car,” quotes one of the company’s slogans. And people responded adequately – preorders hit the 250,000 mark just days after the official unveiling. It’s not all butterflies and sparkles though – last month the German testing institute TüV announced that the Cybertruck probably won’t reach Europe. “The passengers may feel safe, but they are not,” reads the official statement from TüV. All those straight lines and sharp edges make the vehicle quite dangerous in head collisions with other cars as well as for unlucky pedestrians.

You can opt for the alternative though, which is totally safe and meets all regulations. The Cyberphone is already on sale and there are only 23 out of the initial 99 units available. So, If you want a unique, rugged phone with Tesla genes, you have to act fast.