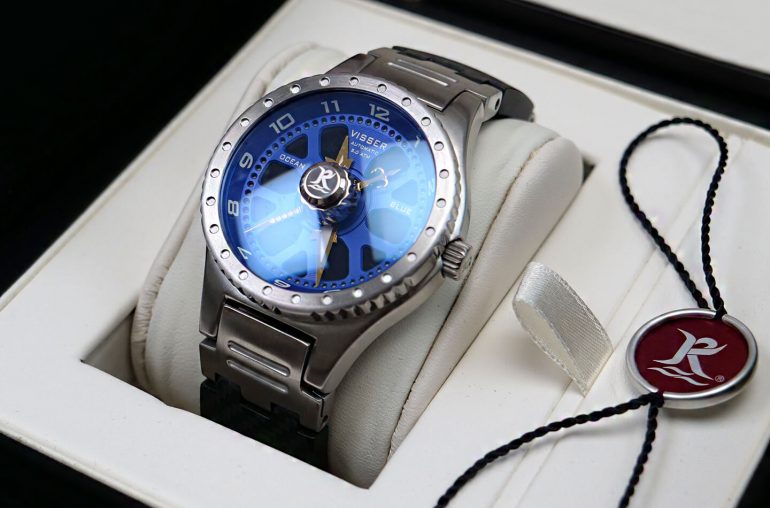 The Visser Watch is a luxury men's watch with a unique background story and a great maritime heritage. We received an Ocean Blue wrist watch review sample.

8.5
Visser Watch review
Reviews
The Visser Watch is a luxury men's watch with a unique design and a great background story that will excite the avid anglers and outdoorsmen as well as anybody looking for a uniquely designed watch.

Visser Watch is a new brand in the watch industry. Developed in the United States, and operated by two Dutch born brothers, the Visser is a luxury wrist watch for the outdoors enthusiast. Inspiration came from fly fishing reels and aerospace design features. We have received a brand-new sample, allowing us to take a closeup look at this unique timepiece. 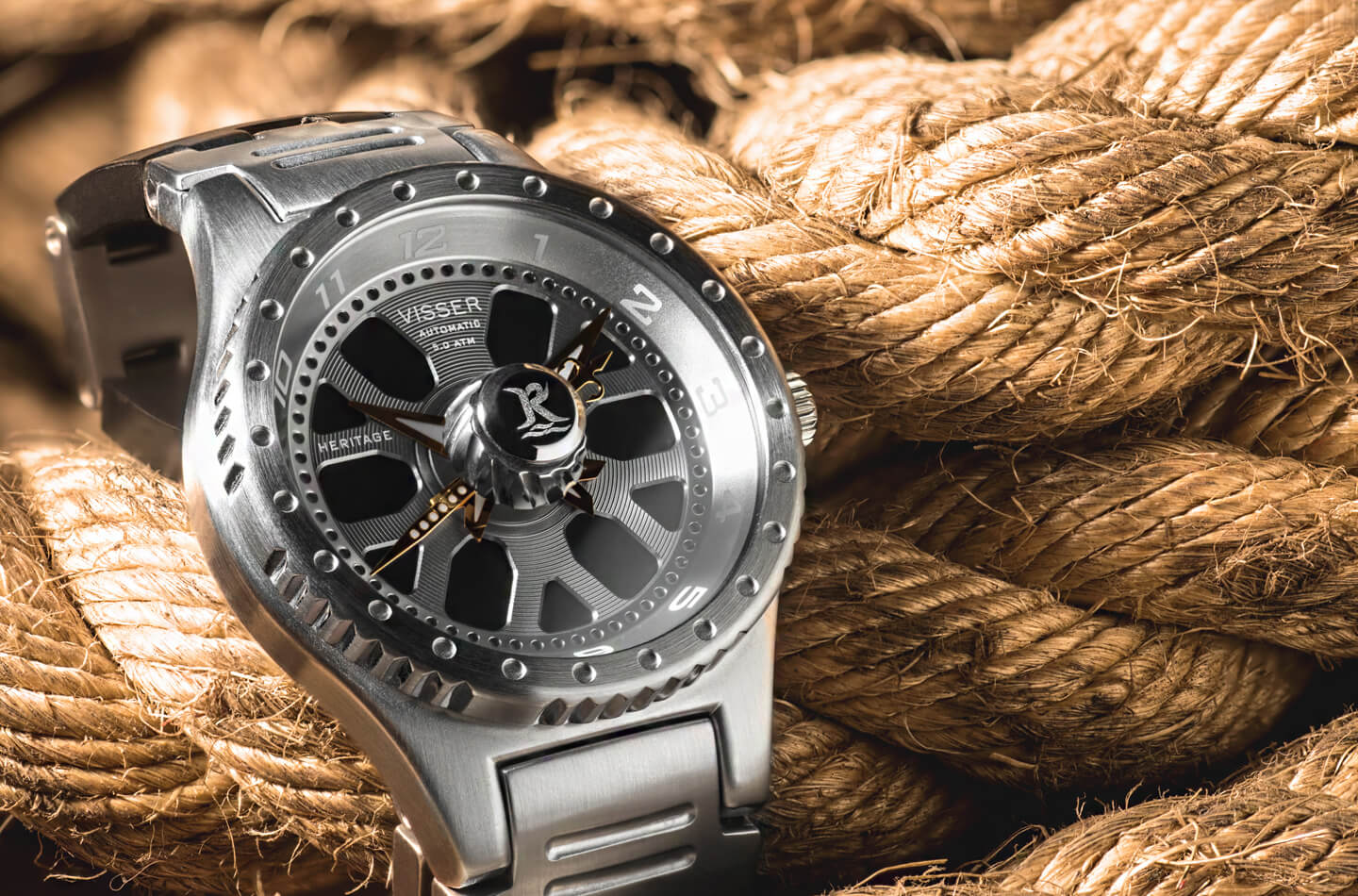 The young company Visser Watch was set up by the Dutch-American Robert Koelewyn, famous for designing many high-end fishing reel brands like Van Staal, Zeebaas and 3-Tand. Meanwhile, his younger brother Bob Koelewyn is also closely involved. Bob takes along 30 years of experience in the aerospace business and operates from the Netherlands.

His brother Robert has spent many years designing high-end fly, spinning and offshore fishing reels in the United States for salt-and freshwater fishing. He used this know-how and experience for inspiration when designing the Visser watch collection series. Visser Watches are designed for all outdoor enthusiasts and giving avid anglers a sense that the Visser watch is part of their gear as well.

The collection currently consists of five maritime watches with two series; the Original and Tech series. The review sample that we have received is the Ocean Blue Watch from the Tech series. Within the Tech series there is also the Sea Green and the Sky Red. These have a similar design, instead of blue anodized aluminum, they feature a green or red anodized dial face. 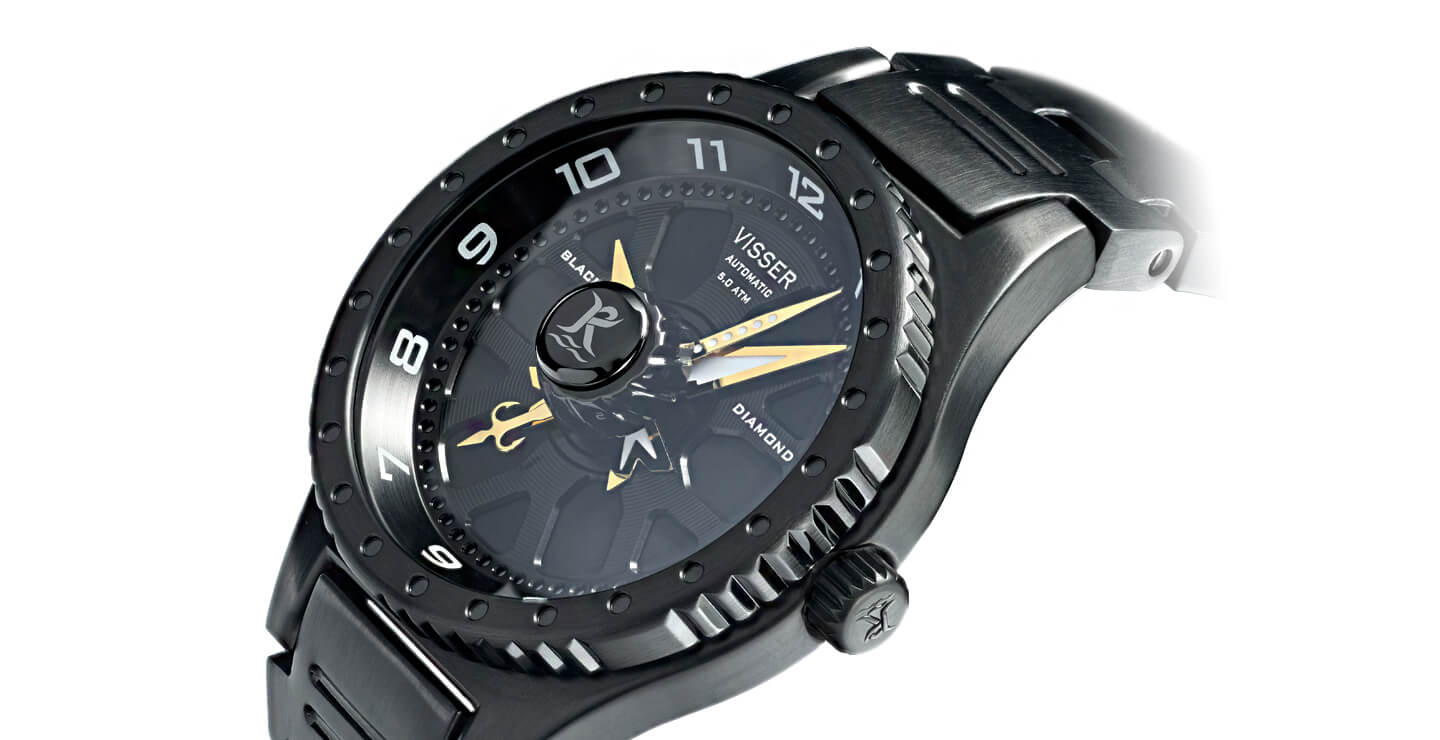 Within the Visser Watch Original Series you will also find the VS model, i.e. the original Visser Series model and the Black Diamond, which is a satin black version with a scratch proof DLC coating. A new Heritage series will be added soon to the collection.

Time to unbox the Ocean Blue. Once you get the box in your hands you feel that you’re dealing with a quality product by just feeling the weight before opening. After you have opened the outer box, your eyes are drawn on the Golden Visser logo, printed on a soft velvet fabric. 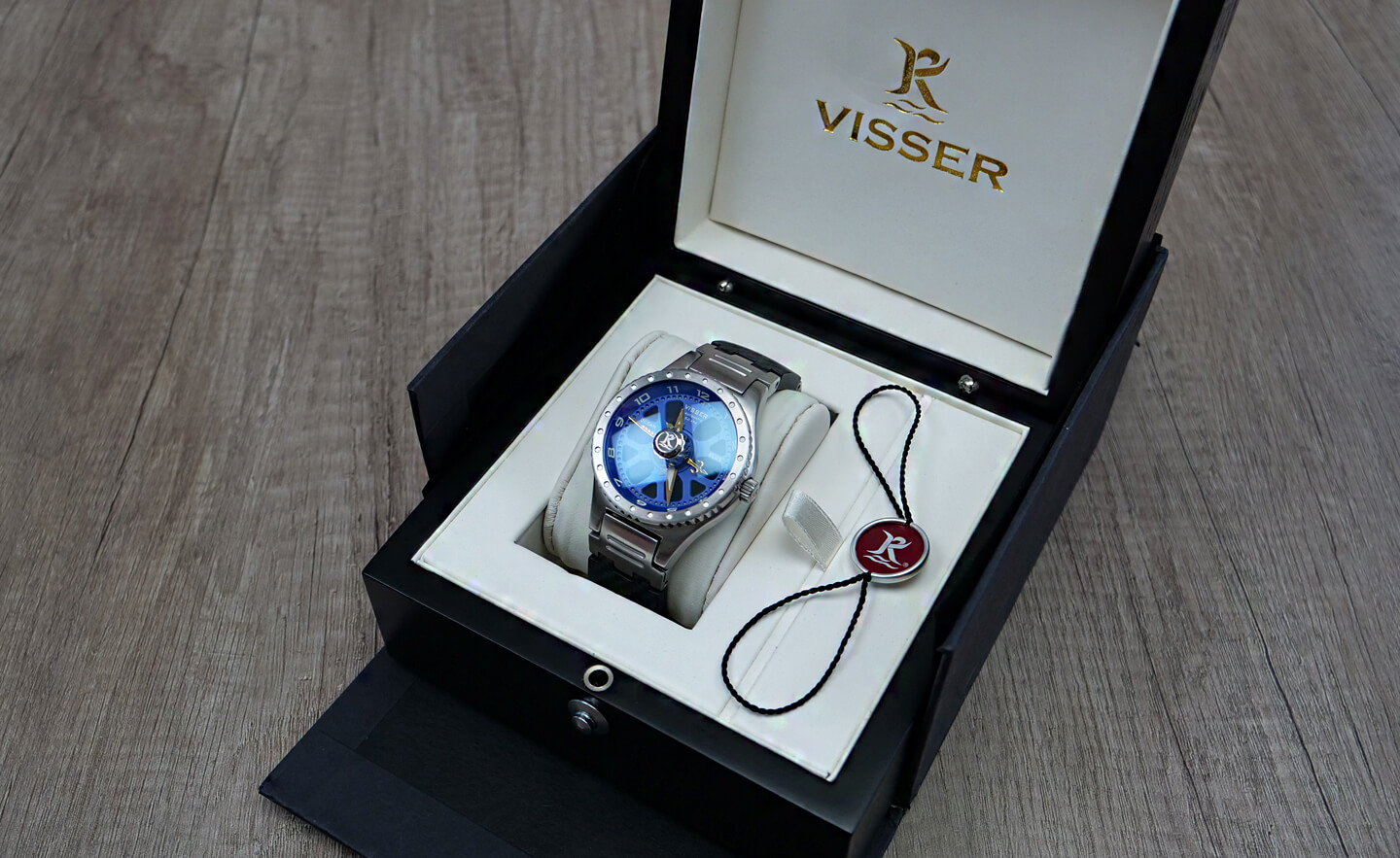 On the inside of the beautifully finished wooden storage box there is a luxurious cream-colored leather inlay. The blue/silver watch really radiates out to you at this point. The inner box design looks very stylish and of high-quality.

There are also two small high-quality screwdrivers to remove or add band segments. And there is a microfiber cloth supplied for cleaning the watch. In addition, a compact instruction manual is included in which briefly the history and the unique story behind this watch is portrayed.

Design of the Visser Watch

Both the watch case and the strap are made of premium materials, that really shows when you hold the watch. The Visser Watch Ocean Blue has a medium format which is not too bulky, you do feel you are wearing a premium watch on your wrist. The Watch case has a diameter of 42mm with a height of 14mm. It feels very comfortable on the wrist. Also, the weight of 156 grams is certainly not very heavy or uncomfortable wearing loose. 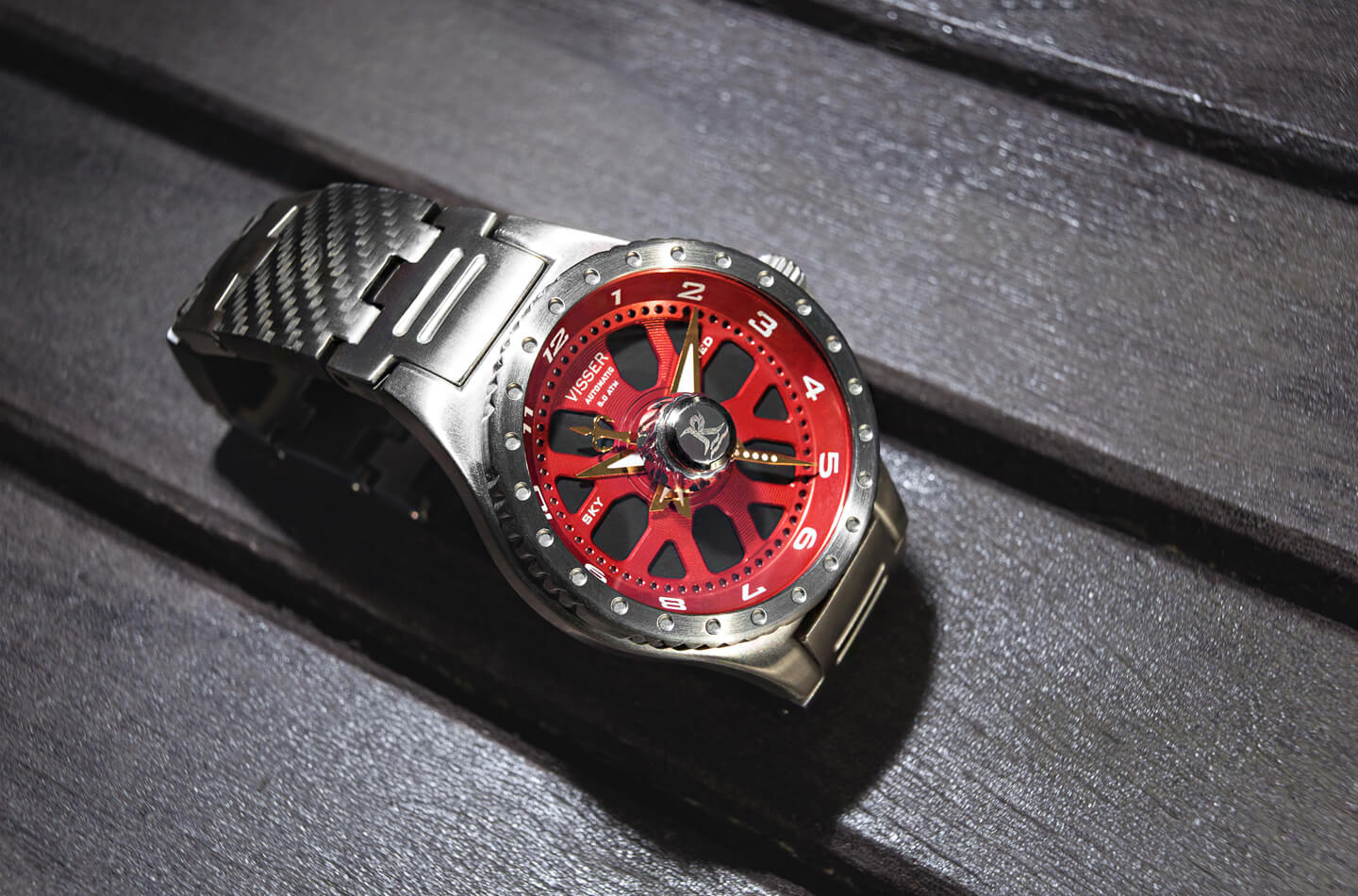 The seconds indicator hand reminds me of a compass, a very characteristic detail. The watch case bezel looks a lot like a fishing reel as does the dial face which is similar to the design of a fly fishing reel. The depth of the dial face is reminiscent of the deep water, especially with the Ocean Blue variant. When you start looking at all the details you see small maritime details everywhere linked to the sports fishing world.

In the compact manual you can read that the Ocean Blue inspiration came from being offshore on the blue ocean using reels Robert Koelewyn just had finished building and needed to test the durability and function. Van Staal reels must survive under very harsh saltwater conditions, so this gained knowledge he considered while designing the Visser Watch. As a result, the maritime watch is not only luxurious, they are also exclusively solid with high-quality materials used, you can touch, feel and see this very clearly.

The Visser Watch Ocean Blue model is made of very fine brushed surgical stainless steel and aluminum from the aerospace industry. The sapphire Crystal glass is AR coated on both sides (anti-reflective coating). This give a very clear view of the dial face.

The movement is a Miyota 9015, a high-quality Japanese manufacturer. The Miyota 9015 has 24 jewels and a power reserve of 42+ hours. It is an automatic movement, as it should in a watch of this caliber. It is a reliable timepiece with a powerful engine. This Visser Watch movement can be wound both automatically and manually. 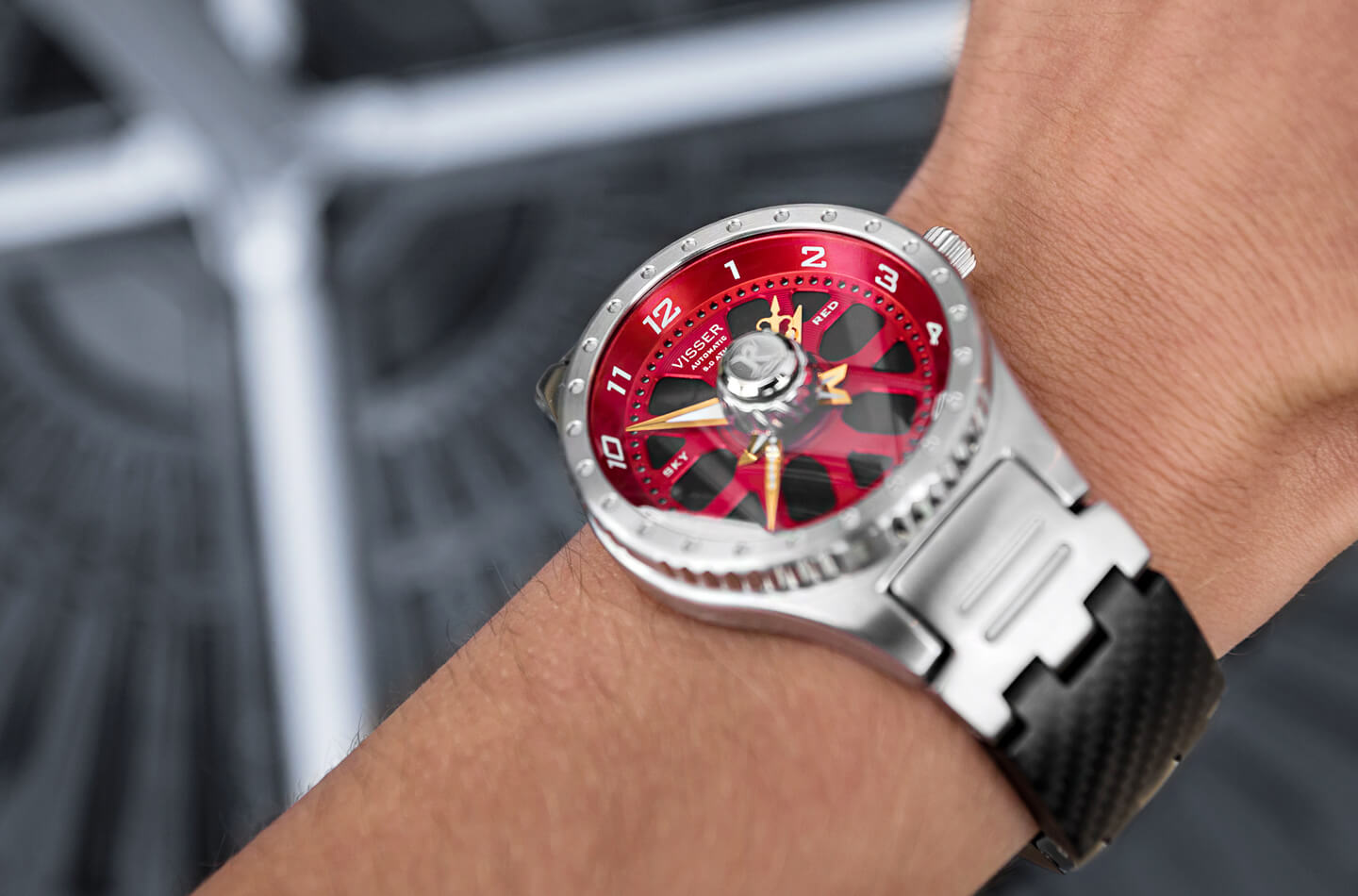 The watch band consists of links made of carbon fiber, alternating with stainless steel. This looks very unique. There may be up to four links be removed, for most men this will certainly be enough.

The band closure is almost invisible. You can attach (snap) the band, as it were, directly on the watch case. This is the same on both sides of the case, making the band also very easy to remove or switch out. It is a band that takes a little getting used to, but works wonderfully simple. You can open and close the band of the Ocean Blue very easy. The band will never just jump open like on conventional band closures.

Another requirement for the outdoors is of course the water resistance. There the Visser watch does not disappoint either. The maritime watch is 5 ATM certified, which means it is waterproof to 50 meters of water pressure (ATM says nothing about the depth). You can take the Ocean Blue in the shower or to swim anywhere without a problem.

It is however important that the watch is not exposed to large temperature differences like a sudden exposure to a very hot shower, or going from a hot Beach in the cold sea water. Since not all the components react the same way to temperature differences (think of expansion and contraction of materials), this may affect the water resistance. This applies to every watch in that matter. 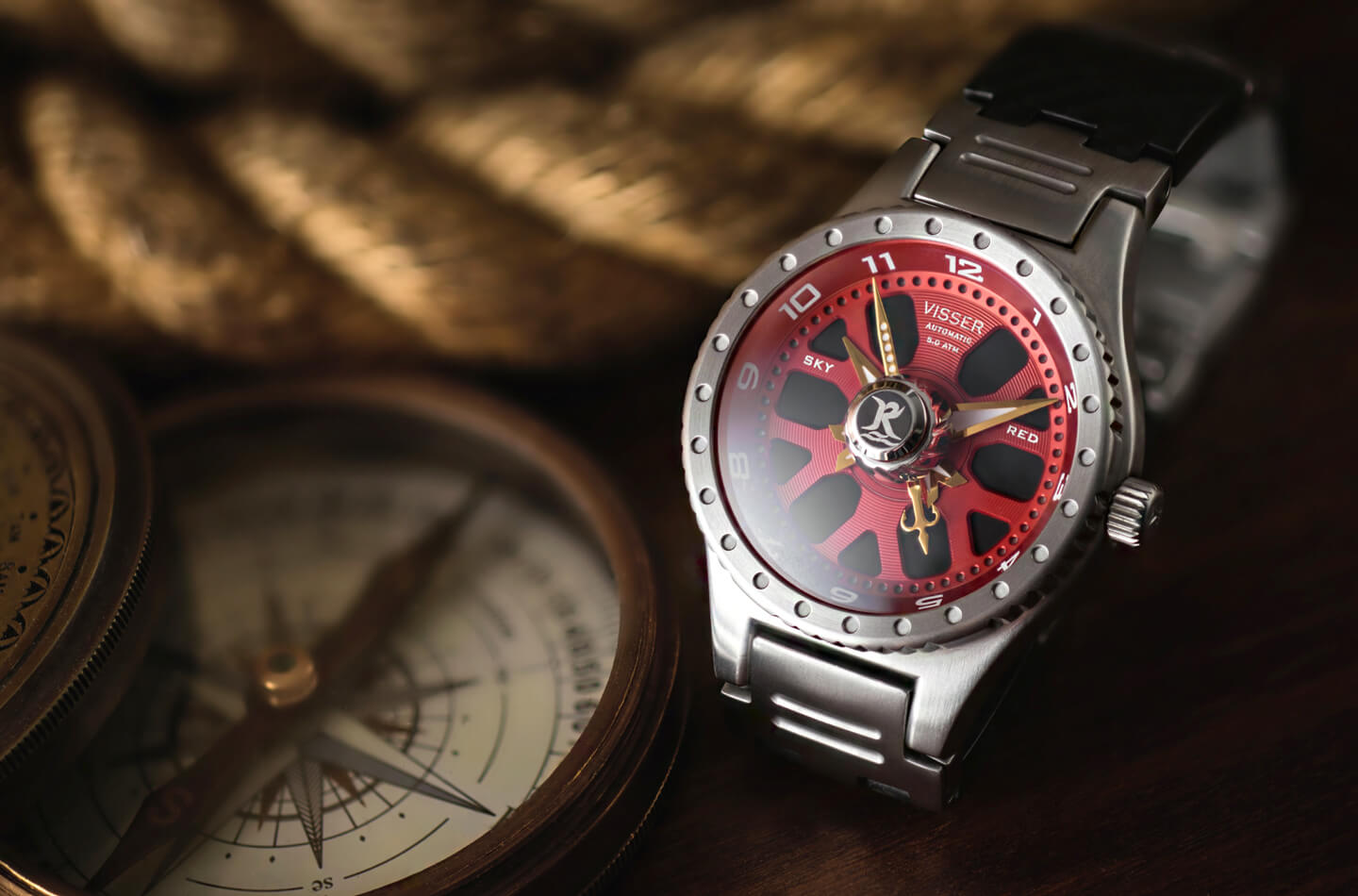 The Visser Watch collection is available exclusively through the website www.visserwatch.com. Just like the two other models within the Tech series the Ocean Blue Watch has a suggested retail price of USD $969.

With such a sale price this watch is not for everyone’s budget. Unlike some other brands however you do not pay hundreds of dollars extra for the brand. There are many premium materials used, that you can see and feel and that makes the price justified.

Visser Watch comes with two-year warranty, after you have completed the registration process on the website. The site promises free shipping to large number of countries, including the United States. There is a Service center in Fairfield Connecticut USA, for North America. For Europe they have a service center in the Netherlands. 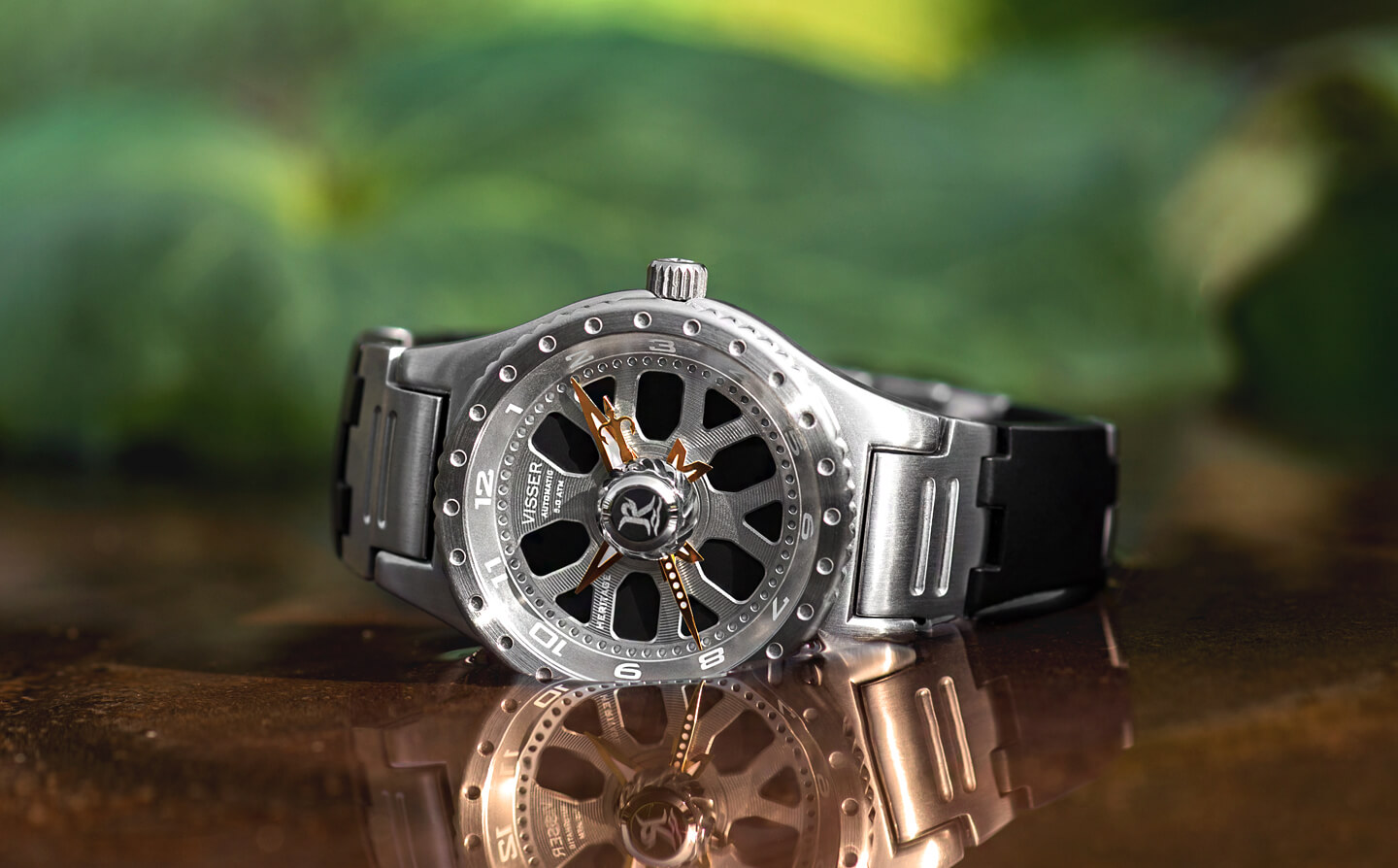 The Visser Watch is a luxury men’s watch with a unique character and a beautiful heritage that will certainly appeal to the outdoor enthusiast. The Ocean Blue Watch from the Tech series is made of high quality materials, including surgical stainless steel, aluminum from the aerospace, carbon fiber and Sapphire Crystal.

In the design of the case and dial face there are several maritime elements which contributes to a contemporary feel. Although the design of course is a matter of taste, I do believe that very few people will not like this watch.

The watch band is very ingeniously put together, after some practice you can put the watch on your wrist within just seconds. Also, changing to a different style band for the watch is done quickly and easy.

The Visser Watch Ocean Blue model can be ordered through the manufacturer’s website for $969 USD. If this is above your budget, then take a look at the Visser Series model from the Original series, this has a suggested retail price of $769 USD.

I for one am very charmed by the Visser Watch and will therefore have difficulty returning the review sample to the Koelewyn brothers.