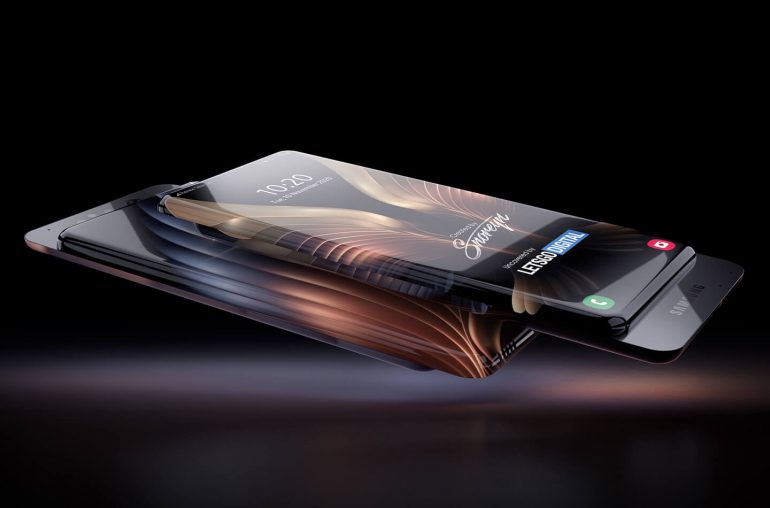 Samsung has a striking smartphone in development with a transparent housing, which consists of 100% screen surface and has a sliding camera system.

Samsung has now released several smartphones with a flexible display, including the Galaxy Z Flip and Galaxy Z Fold 2 foldable smartphones. However, a flexible screen is not only applicable to foldable devices. For example, a bendable screen can also serve to create a wrap-around display smartphone, such as the Xiaomi Mi Mix Alpha with Surround Display introduced last year.

Samsung also seems to be investigating the possibilities of developing a smartphone that consists completely of screen surface. Although the device that Samsung has patented is significantly more advanced than Xiaomi’s Mix Mix Alpha.

This time, there is no frame visible at all – not even at the top and bottom and not even around the camera system. The Samsung smartphone that LetsGoDigital reports on today consists of 100% screen surface. It is not only the design where this phone is progressive, Samsung also seems to have some very special functions in development. 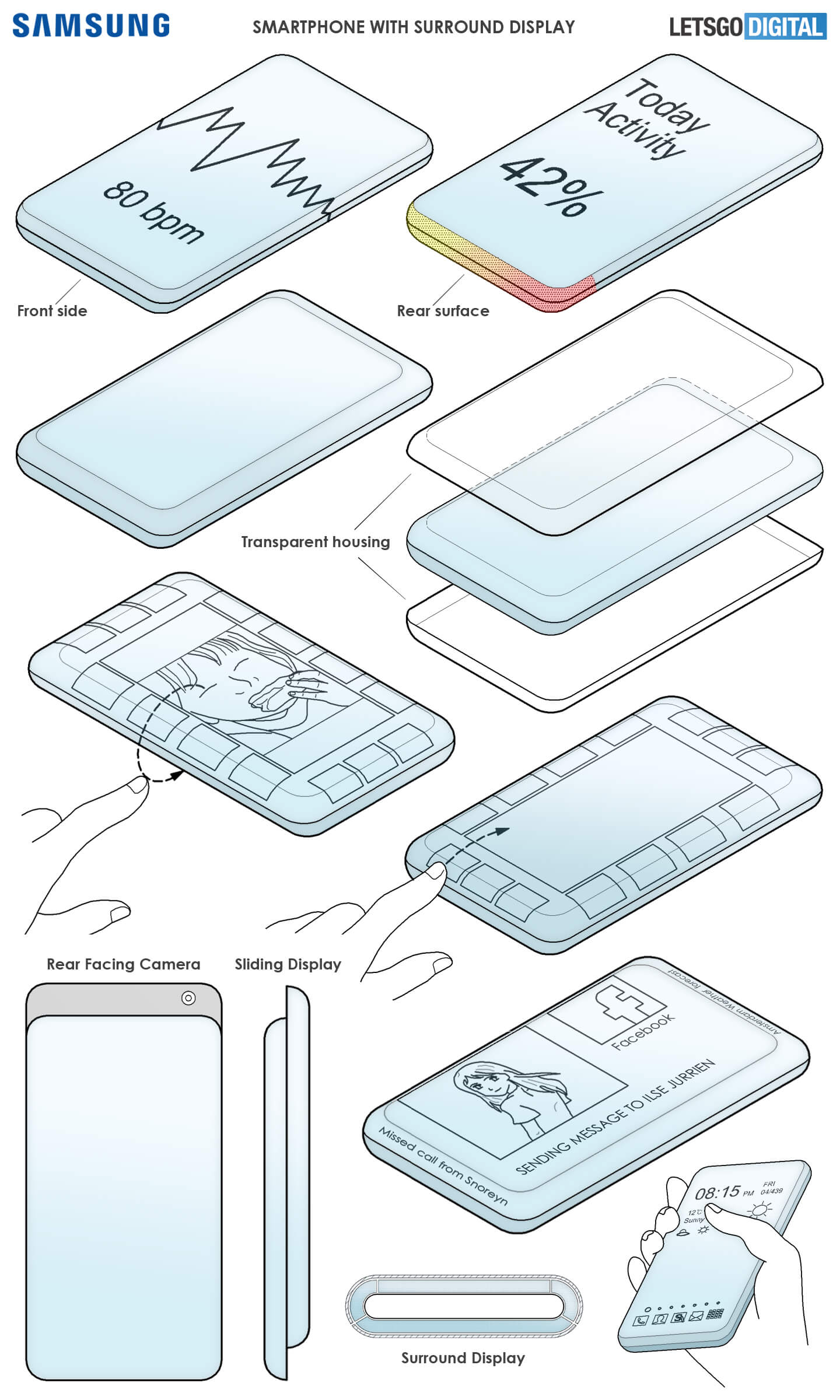 The brand new patent entitled ‘Electronic device’ was applied for by Samsung Electronics at the USPTO (United States Patent and Trademark Office) in July this year and was published on October 29, 2020 and included in the database of the WIPO (World Intellectual Property Office), for worldwide protection of the patented technology.

The 70-page documentation describes in detail how Samsung wants to realize this special smartphone design. The mobile phone is provided with several screens to enclose the entire device with a display surface.

A curved display is used for the front. A flat screen is applied to the back and several semi-rounded displays are used for the edges. Different types of screens can be used, including an AMOLED or LCD display. In practice, you will not realize that it concerns multiple displays, the content can – depending on the app – simply flow from one screen to the other.

For the development, especially in the rounded corners, it is easier to process multiple screens than one large display. Nevertheless, as an alternative, the documentation also mentions the use of one large wrap-around screen, which is folded around the entire device. This would make it easier to adjust the display resolution and also saves on power consumption.

To give some life to the patent sketches, in-house 3D designer Giuseppe Spinelli (aka Snoreyn) made a series of product renders, based on the images and documentation as patented by Samsung Electronics. These 3D color renders are for illustrative purposes only, to better visualize the proprietary technology. 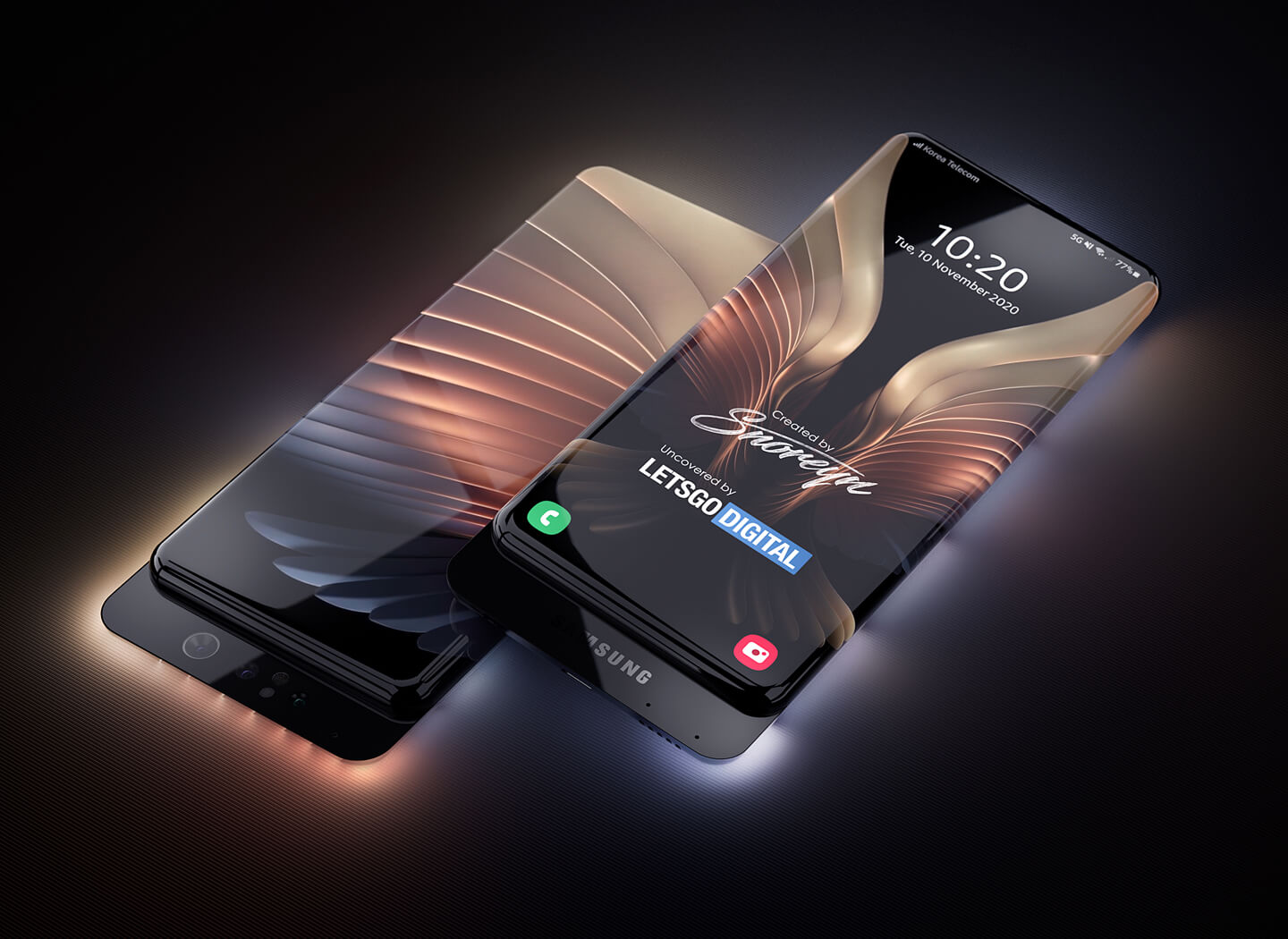 The housing is made of a transparent material that can transmit light, such as transparent acrylic or transparent polymer material. By making the housing transparent, and having it consist of two parts, it can be placed over the screen – which of course makes a big difference with all models available today.

All necessary components are placed inside, even under the surround display, for this purpose support columns are used. Thus, the components are not visible despite the housing being transparent.

The transparent housing has several advantages, as this device can adapt to the environment – like a kind of chameleon! For example, the device as a whole can change depending on external factors, such as the weather.

For example, the smartphone can receive weather information and display it on the entire screen. Is it raining or snowing? Then the drops literally fall off your screen. Predefined graphic elements are used for this. The same also applies to your state of mind. The device can track your activities and thus provide comprehensive information about your health and / or training performance.

The color information of these stones is captured by the camera, then the device searches for matching images and displays them on all display panels. This way your smartphone can completely disappear in its environment.

Are you at a metro station? Then the camera can not only detect color information from the metro station, sound can also be detected through the microphone. The content displayed on the smartphone screen will then correspond even better to the environment in which the user finds himself.

Thanks to AI (Artificial Intelligence), this device can also recognize user patterns and adjust the information displayed accordingly. Do you always drive to work around the same time in the morning and always check the weather forecast in advance? After doing this a number of times, your phone will recognize the patterns and then automatically display the weather report of the particular location you are in every day at time X. This works the same for displaying traffic information etc.

Samsung has even more details in store for this surround display smartphone with transparent housing. Samsung also wants to provide this device with a sliding mechanism to hide the cameras. By sliding the rear part of the housing down, relative to the front part, the camera system with flash appears.

The camera is mounted on the front housing and is aimed at the back, in order to be able to take regular photo and video recordings. Since the device also has a screen at the rear, you can easily turn the smartphone around to be able to take selfies or make video calls with the same camera system.

By using a sliding mechanism, no camera is visible when you use the device folded – like a normal smartphone. This is a clear difference from the Xiaomi Mi Mix Alpha’s vertical camera strip. As this Samsung smartphone consists entirely of screen, the device will have a very striking and futuristic appearance, especially in combination with the transparent housing.

Although a sliding camera offers sufficient photo and video possibilities, the documentation also mentions a second camera module that is placed under the screen. This camera is directed towards the front, so that it can be used to detect the user, in order to determine which displays should be switched on based on use.

For example, is the phone lying flat on the table, or is it held in the hand? Depending on the use, the device determines which display and / or displays should be activated. At the edges, the content will continue from the main screen – regardless of whether you are using the front or back screen.

The display that is not in use can show a preset graphic object, such as a photo of your beloved dog. Thumbnails can also be displayed on the side surfaces. As an example, the documentation mentions the camera application, where thumbnail images of your most recently captured photos are displayed along the edges of the screen.

By simply clicking or dragging such a thumbnail image you can view it enlarged. If desired, the user can also easily display that particular thumbnail image on the rear screen. 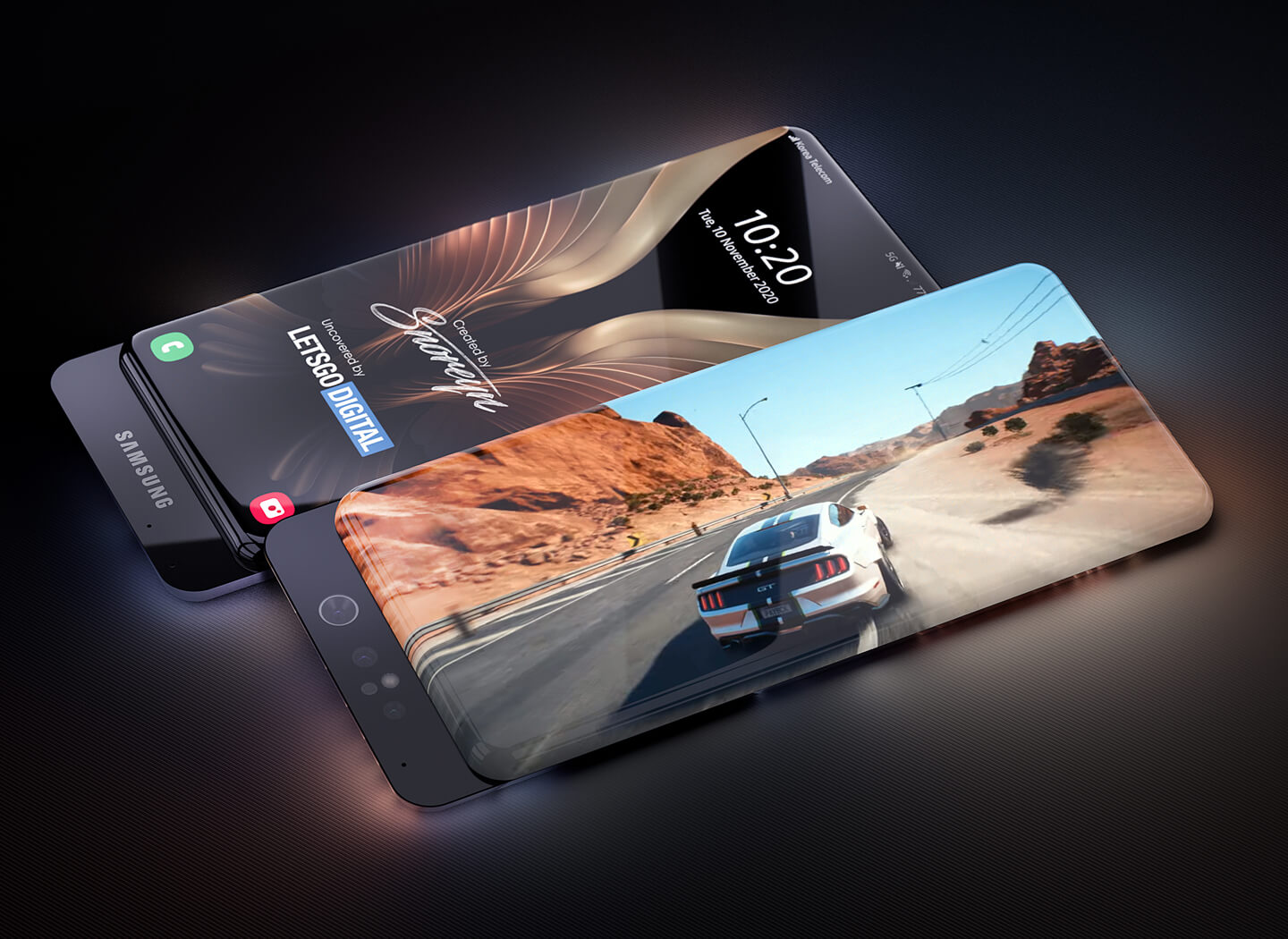 Another example mentioned in the patent documentation; a video is shown on the front, by turning the device over you will see the corresponding information of that video – think of the file name, recording date, video resolution and file size. Are you with several people and do you want to enjoy a movie together? Then you can also decide to show the video on all displays at the same time. The video can also be displayed in split-screen mode.

The necessary sensors will be placed under the display, including a fingerprint sensor and possibly also the speaker. Remarkably, no buttons or connectors are visible on the patent illustrations. The documentation states that this unit can be turned on and off via the screen – instead of a physical power button. For this, a piezoelectric film sensor is used, which generates a voltage (electrical charge) as soon as a touch is detected on the screen, after which the display will be switched on.

Replacement for the SIM compartment can be found in the eSIM (built-in electronic SIM) – just like the Motorola RAZR 2019 can also be used exclusively with eSIM. High-end devices such as the Samsung Galaxy S20 and Apple iPhone 12 offer the possibility to use an eSIM thanks to dual SIM functionality, but can also be used in combination with a physical nano-SIM if desired.

Although no USB-C connection is visible on the patent images, the documentation does mention the possibility of wireless and wired charging. It would not be the very first smartphone without buttons and connections though, the special Meizu Zero was introduced at the beginning of last year – where the model name refers to the fact that this phone has “zero” holes and notches. 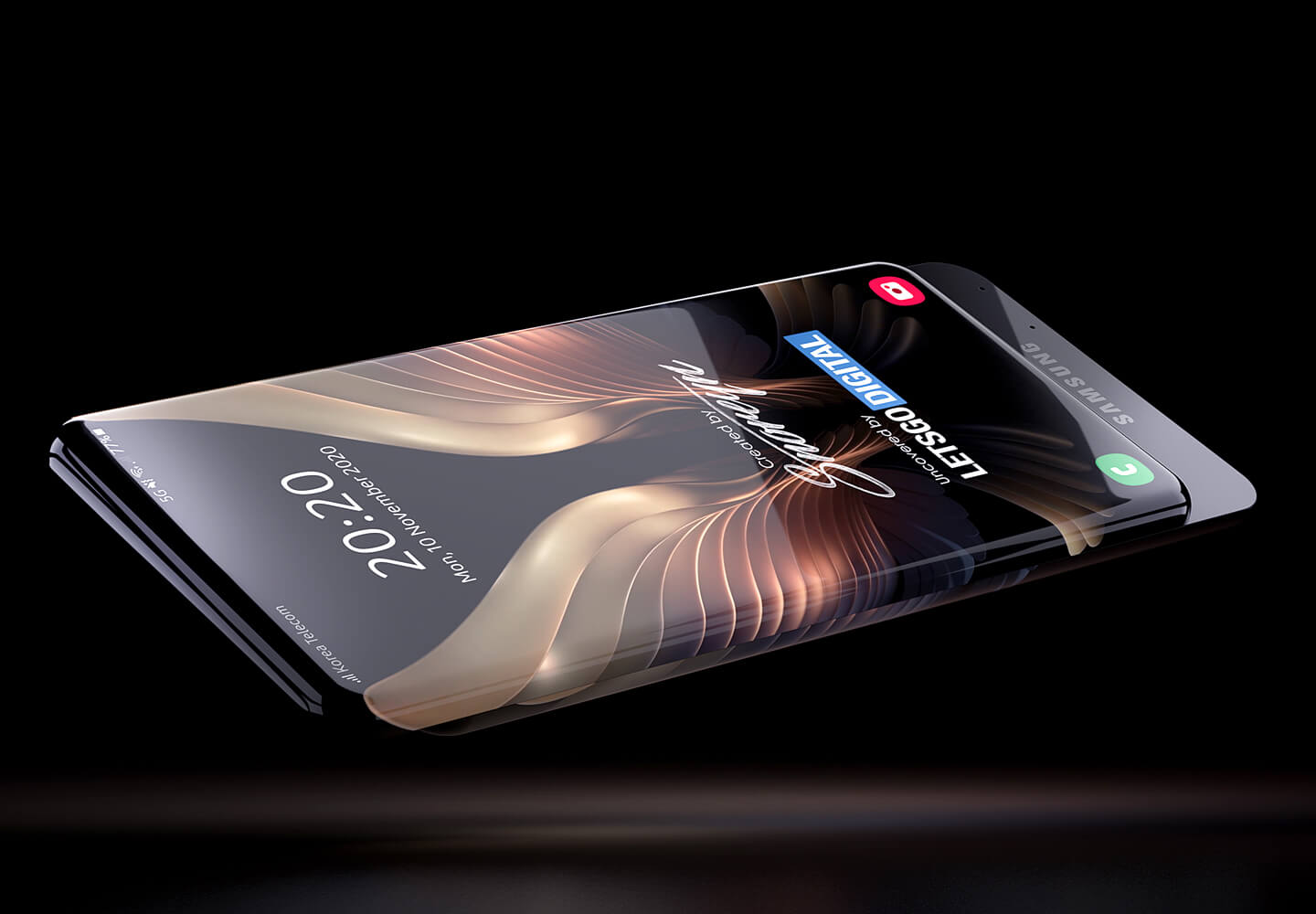 Such Samsung smartphones are not yet available, but that does not mean that Samsung is unable to produce such phones. The market must also be ripe for it, in addition such a smartphone should deliver sufficient extra added value, compared to the higher price.

For example, the Xiaomi Mi Mix Alpha was introduced in September 2019, this particularly futuristic smartphone with wrap-around display and 108MP camera carried a suggested retail price of € 2,500. The device was to be produced in a limited edition, but was ultimately never brought to the market. The exorbitant sales price will undoubtedly be related to this. However, that does not alter the fact that the technology is already there.

Incidentally, it is too easy to think that Samsung has copied the ideas for this surround display smartphone from Xiaomi. Because the Koreans already registered a patent in their homeland Korea in 2016, on which this new patent is further elaborated. Partly for this reason, it is certainly not unlikely that such Samsung prototypes already exist – no matter how futuristic they look like.

However, the question remains whether such a smartphone can deliver sufficient added value and when the price / quality ratio will be sufficient to actually put such a device on the market. 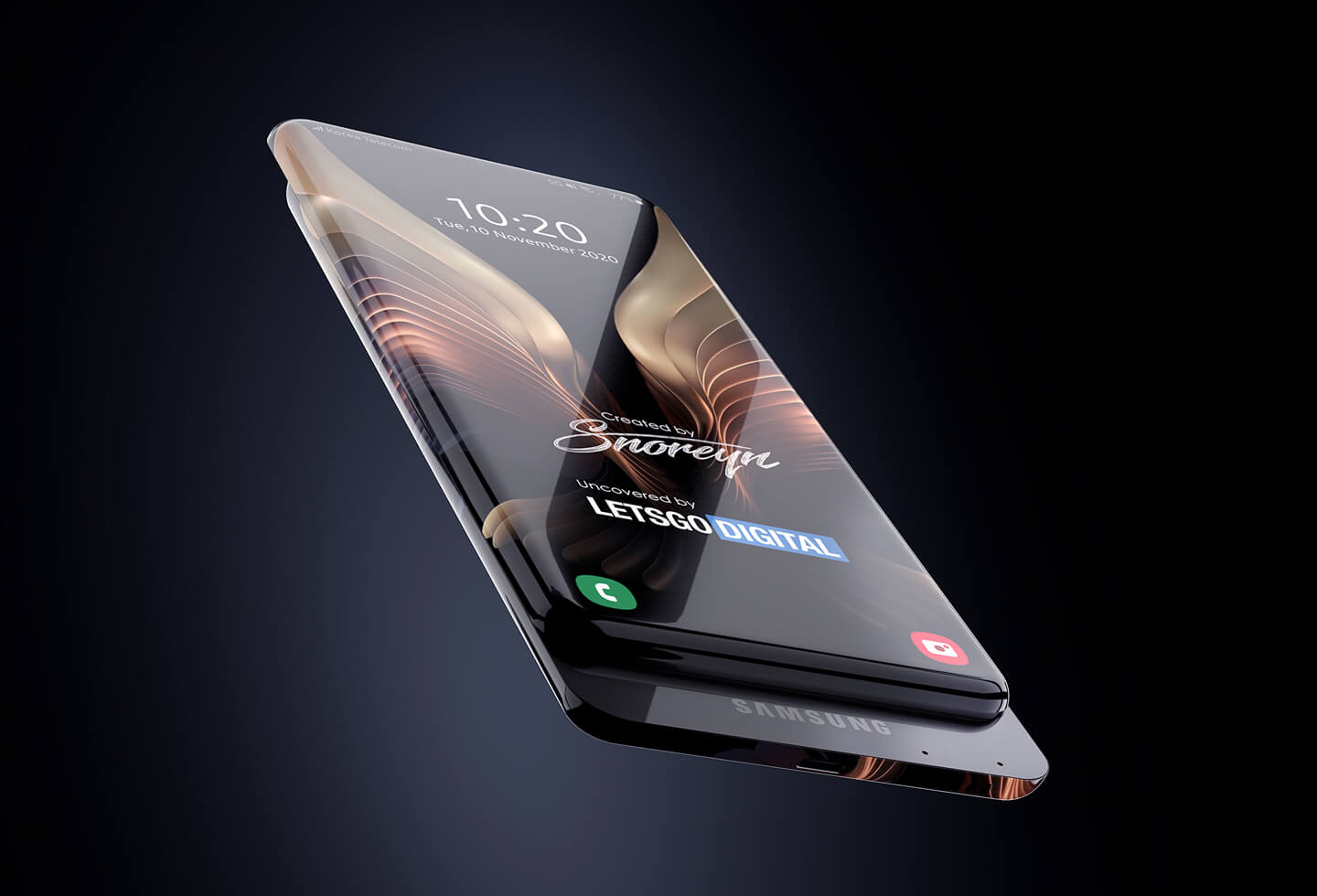 If Samsung wants to release such a mobile phone, it is certainly not inconceivable that it will be placed within the relatively new Galaxy Z series. This also includes the foldable phones, such as the Z Flip and Z Fold 2.

Most likely, the Galaxy Z Flip 2 will be the next foldable device from Samsung, but this folding phone is not expected until the summer of 2021. First up is the release of the Galaxy S21 series, these high-end smartphones will probably already be announced in January.

Last year, the Z Flip was introduced simultaneously with the S-series devices, however Samsung seems to be making a small change in the coming year. The Samsung S21 is expected a month earlier than usual, while the Z Flip 2 will be released a few months later.

View the documentation of the Samsung Surround Display smartphone here. 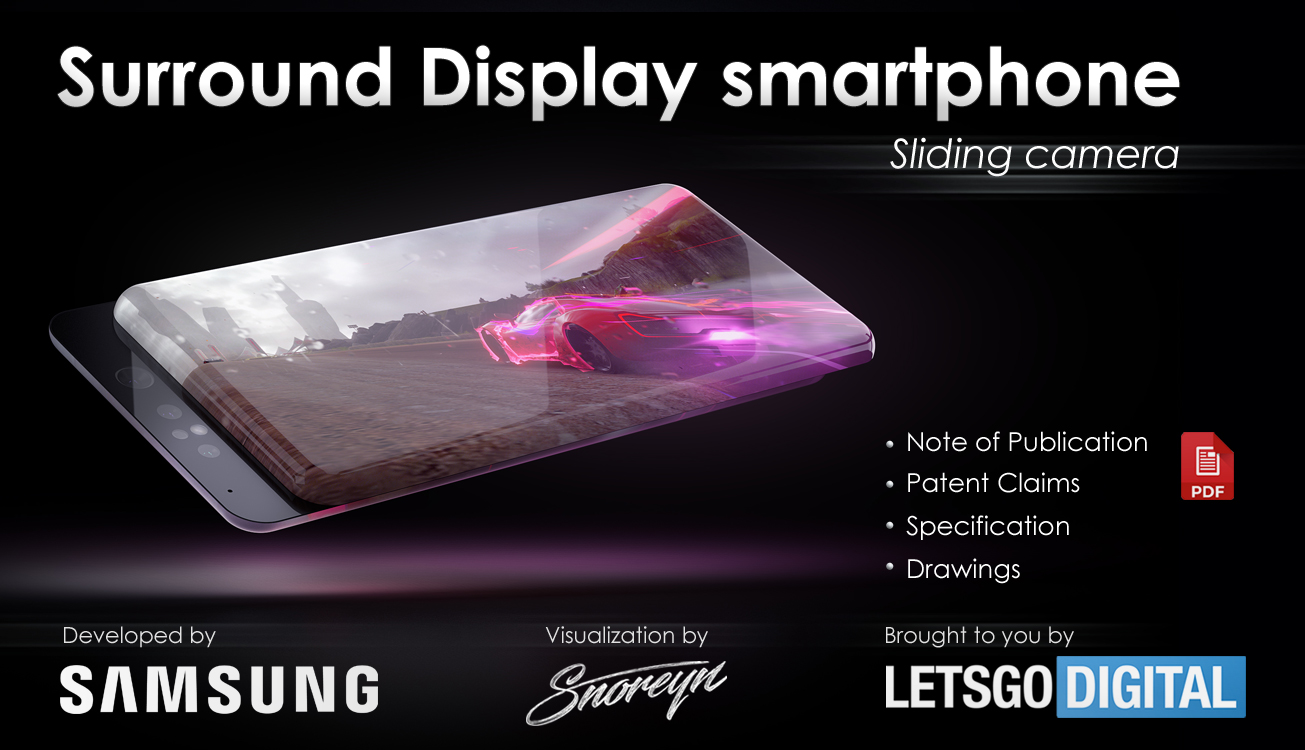 NOTE : The product images shown in this publication are created by in-house designer Giuseppe Spinelli (aka Snoreyn). The renders are for illustrative purposes only, this product is not for sale. The images are based on the patent drawings from Samsung Electronics. You can use this 3D artwork for free, as long as you include a clickable source link into your publication. Thank you very much for understanding.