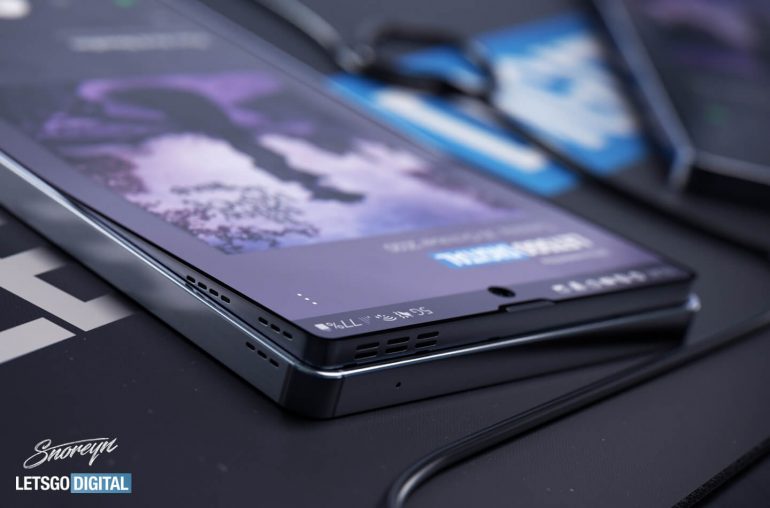 Samsung develops a phone with a flexible display that folds out of the housing, to form a speaker resonance chamber for extra high sound quality.

Samsung recently released the Galaxy Z Flip 5G and Galaxy Z Fold 2 foldable smartphones – simultaneously with the Galaxy Note 20 series. Now we have to wait until February 2021 before the Korean manufacturer will introduce new top models again – presumably the Samsung Galaxy S21 series and the Galaxy Z Flip 2. The arrival of flexible displays has already resulted in various foldable models, which Samsung nowadays places in its Galaxy Z series. Will the flexible screen also make its debut in non-foldable models from the high-end S series and Note series in the future?

As the smartphone is a relatively small and thin device and the amount of features has only increased in recent years, manufacturers are eagerly looking for new methods and possibilities to further enhance the user experience, without compromising the portability of the phone. The flexible screen can help here.

Recent documentation shows that Samsung is investigating the possibilities of providing future Galaxy smartphones with a speaker resonance chamber, in order to significantly increase the sound quality of the audio output.

How Samsung want to make this possible? By using a flexible screen, which can partly fold forward and thus comes out of the housing (as a kind of pop-up system). This creates space in the housing that functions as a resonance chamber for the speaker, so that a professional audio experience can be realized. 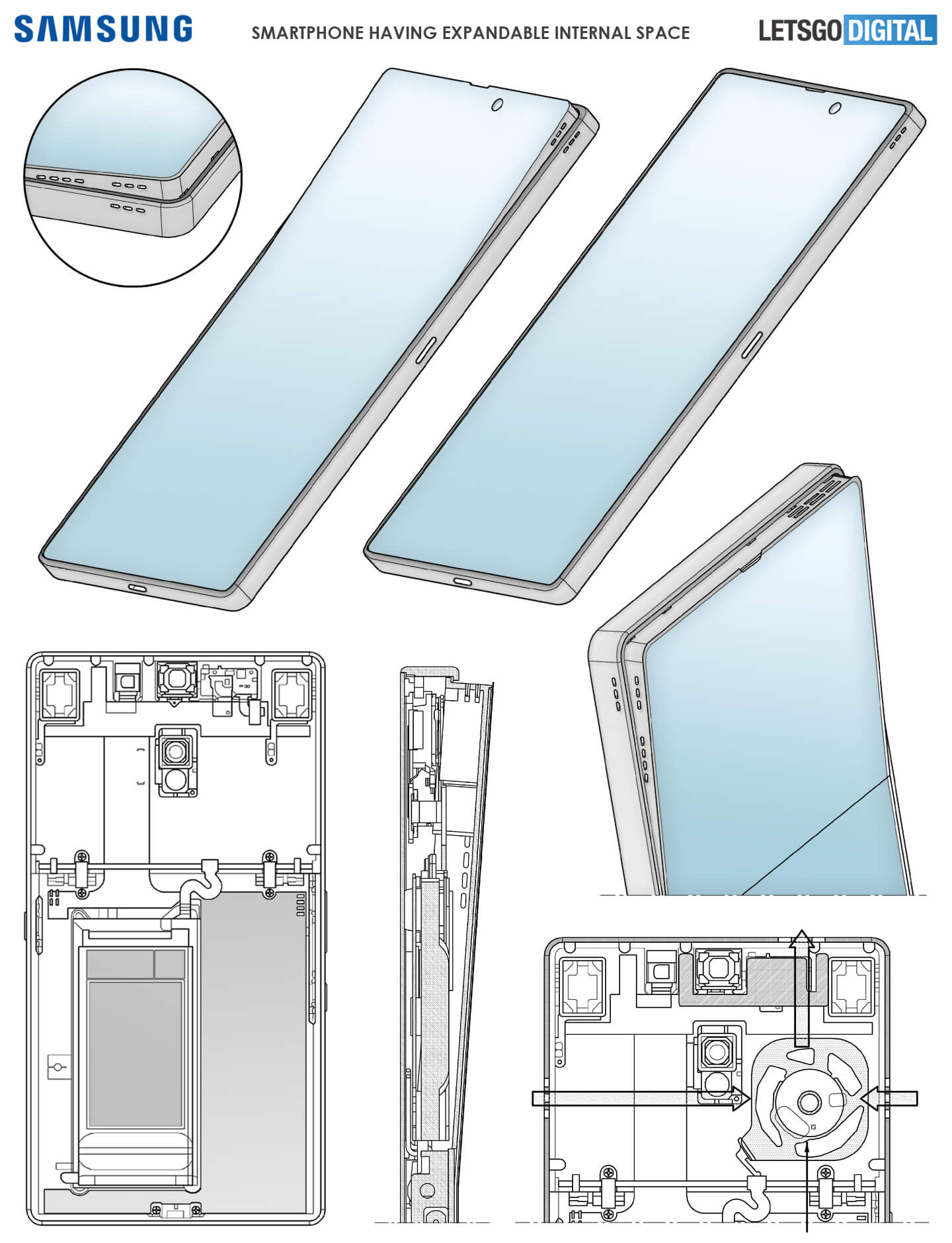 It was February this year when Samsung Electronics filed a patent with the WIPO (World Intellectual Property Office) for an ‘Electronic device having expandable internal space’. The 35-page documentation was published on October 15, 2020 and describes in detail how Samsung wants to create this speaker resonance chamber.

The housing consists of a front and a rear panel, between which all components are placed. One or more loudspeakers are placed directly under the front panel, as well as a microphone, a front camera module and various sensors.

These components can move with the front panel and flexible screen. The top part of the screen makes an inward folding movement, without the housing moving with it. This creates extra resonance space for the sound equipment within the housing.

To get a better idea of ​​the patented technology, in-house 3D graphic designer Giuseppe Spinelli, aka Snoreyn, created a series of product renders based on the patent images and documentation from Samsung Electronics. The 3D renders in this publication are for illustrative purposes only. This product has not been officially released by Samsung and is therefore not available for purchase.

Giuseppe also made very accurate renders of the Galaxy Z Flip earlier this year – even before the official introduction of that device. In addition, the Italian designer made several impressive video animations for the PlayStation 5 that went viral on YouTube.

The documentation mentions the use of a plastic polymer display – similar to the Samsung Galaxy Fold. Nevertheless, Samsung reserves the right to choose a different type of screen. Like for example the extra scratch-resistant Ultra Thin Glass (UTG), as Samsung used with the more recently introduced Galaxy Z Flip and Z Fold 2.

The speakers are placed close to the side element, so that the radiation efficiency of the sound can be improved. The speakers can be divided between left and right to create an optimal sound effect. A cooling fan is also installed, which effectively dissipate the heat produced by the smartphone.

Furthermore, Samsung mentions that the touch display might also be compatible with a stylus pen. For the time being, Samsung´s S Pen is not compatible with foldable displays, but there have been rumors for some time that Samsung is working on this. Earlier this year LetsGoDigital also reported about a possible Galaxy Note Fold.

What is striking about the patent images is the rectangular frame of this Samsung phone, which is immediately reminiscent of the industrial design of the recently introduced iPhone 12 series. However, this Samsung device does look a lot more futuristic and innovative than the one from Apple.

The current Galaxy S series models, such as the Galaxy S20, S20 Plus and the S20 Ultra, have a significantly rounder design, but Samsung can of course change this in the future. Just like the Note series also has a more rectangular, business look.

The idea of ​​Samsung is not entirely new. Samsung’s Korean counterpart, LG Electronics, has been paying a relatively lot of attention to audio on their mobile phones for years, catering to music lovers and those from the music industry. LG has its Boombox speaker, the inside of the housing is also used as a resonance chamber to create an extra loud bass.

With the Boombox Speaker, LG was able to make enlarge the resonance chamber of the G7 ThinQ by 25 times compared to the G6, as was described in the press release at the time. Samsung’s version will create even more inner space, which will do justice to these advantages.

Whether and when Samsung wants to release this high-quality audio smartphone remains unknown. In any way, this does show once again that the arrival of flexible displays will open a large number of doors. Not only do new design options arise, such as foldable phones, the flexible display can also enable completely new functions, such as this resonance chamber.

Of course, Samsung has the great advantage that the company develops both phones and displays. With increasing competition from China, Samsung seems to be putting extra effort into the use of flexible screens for smartphones, in order to be able to cope with the competition and remain the global market leader. 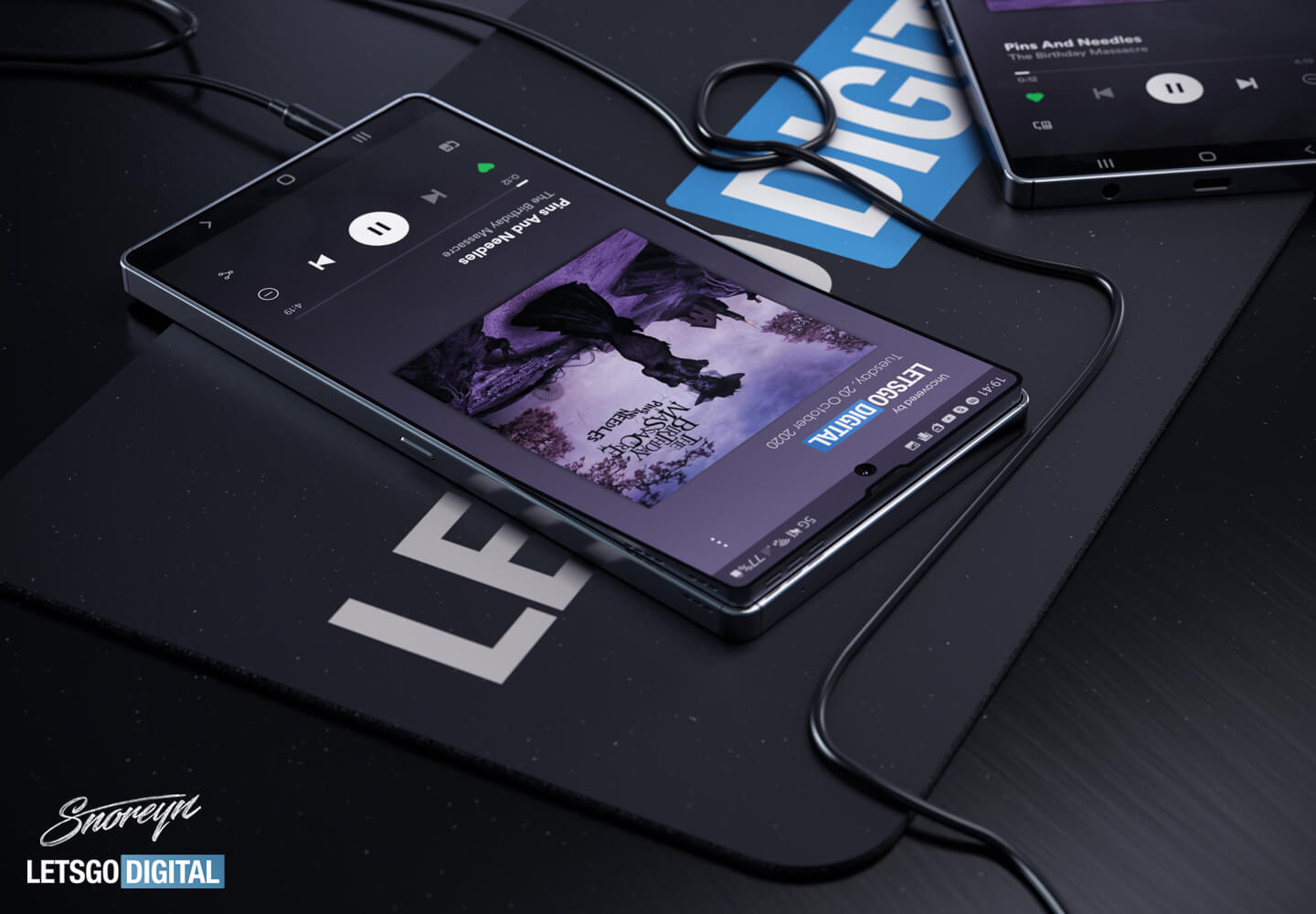 Although this Samsung smartphone is not really foldable, a flexible screen has been used. Should Samsung decide to roll out such a concept, it could very well make its debut in the high-end Galaxy S series. Perhaps this is also the reason that the first two images shown in the patent are from the Galaxy S8 smartphone, used as an example to show the current state of affairs.

By providing the S-series with a flexible screen, Samsung could create an important distinguishing feature compared to other available phone models. For years Samsung has been the only manufacturer that introduced phones with an edge display, which were exclusively for the high-end Galaxy S and Note series.

In the meantime, these curved screens are being used by many manufacturers. Can Samsung once again create a display innovation, this time by incorporating a flexible screen in a non-foldable phone? In such a case, it is likely that a future Galaxy S Ultra model will be the first to feature this new type of screen. It is probably still too early for the Galaxy S21 Ultra, which is expected next year, but it is certainly not inconceivable that Samsung has already produced such a prototype in the background.

In the mean time, Samsung Display has filed a trademark with KIPO (Korean Intellectual Property Office) for a ‘Blade Bezel’. The application was filed on October 16, 2020 with the description indicating it contains a ´smartphone display´.

Although it remains uncertain what a ‘Blade Bezel’ exactly is, it could mean that the upcoming Galaxy S21 series will feature a new bezel design. Could it be similar to the industrial design of the iPhone 12? Just like the in August released Galaxy Tab S7 and S7 Plus. These tablets also feature a straight frame, instead of more rounded edges like its predecessor.

What is certain is that the upcoming Samsung flagship models will offer support for the superfast 5G mobile network. Samsung already offers a wide range of 5G smartphone models, including the recently announced Galaxy A42 which is available for just €350.

Take a look at the documentation of the Samsung Galaxy smartphone. 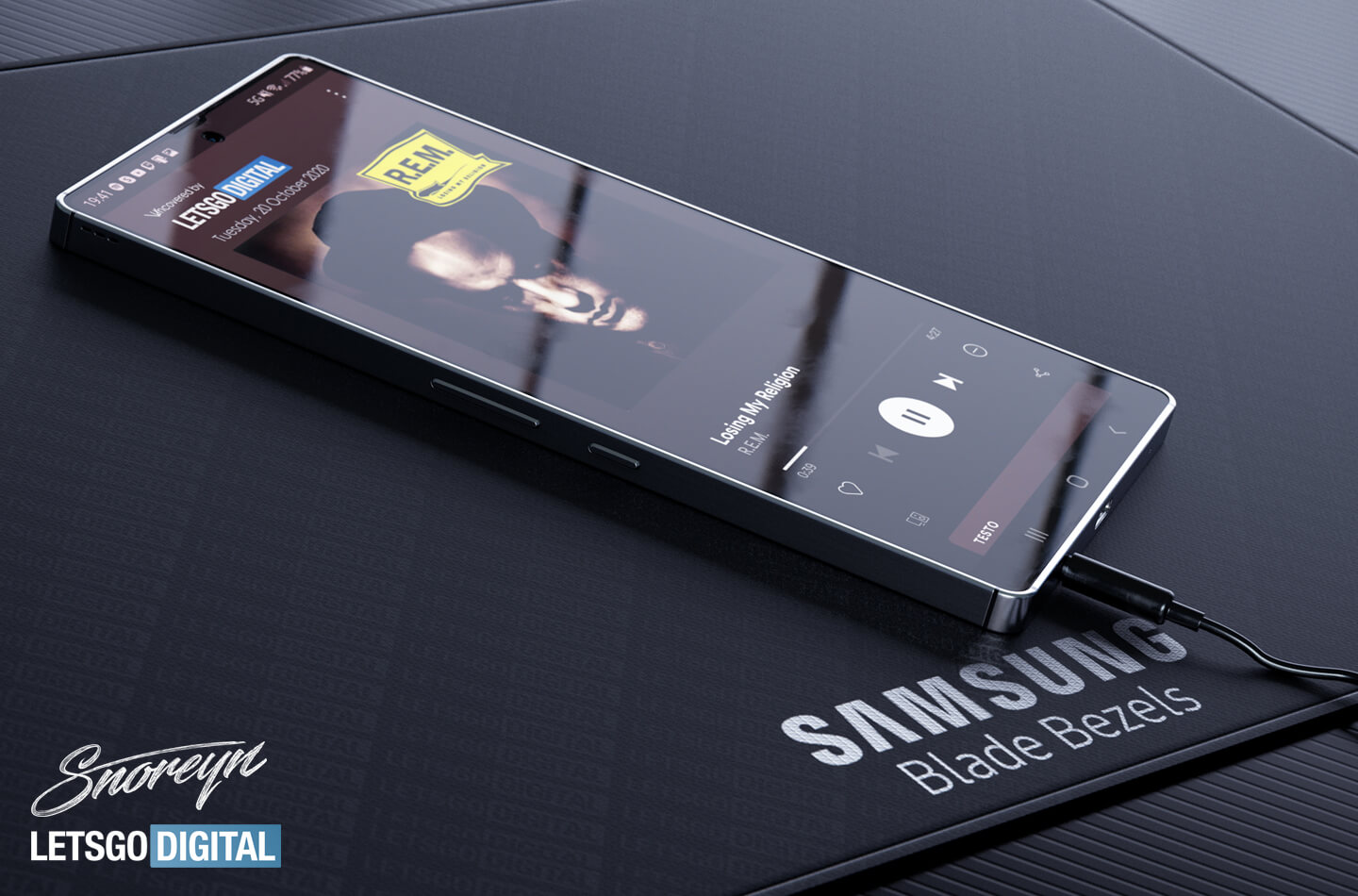 Note to editors : The product renders presented in this publication are made by in-house designer Giuseppe Spinelli (aka Snoreyn) – also known for his impressive PS5 videos. The 3D images are based on the patent drawings from Samsung Electronics and meant for illustrative purposes only. This product is not for sale. The renders are copyright protected. You can use this artwork for free, please be so kind to include a clickable link into your publication. Thank you very much for understanding.