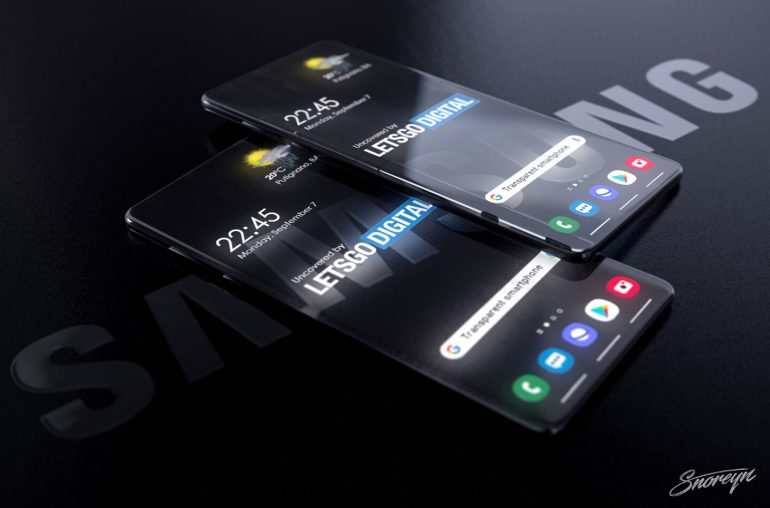 Samsung patents advanced technology for the development of a futuristic transparent smartphone enabling users to see through the device completely.

Last month, Samsung announced a series of new Galaxy products, including the Galaxy Z Flip 5G and the Galaxy Z Fold 2 foldable smartphones. The Galaxy Note 20, Note 20 Ultra, Galaxy Watch 3 smartwatch, Tab S7 and S7 Plus tablets, and Galaxy Buds Live earbuds were also announced. One by one high-end devices packed with technological innovations. But what more can we expect from the Korean manufacturer in the future?

Once in a while you hear about transparent smartphones. Although various smartphone manufacturers have been developing this advanced technology for decades, there are as yet no devices available that are completely transparent. In 2018, LetsGoDigital already reported on a Sony smartphone with a double-sided transparent display. The Korean counterpart LG has even patented a transparent foldable phone. Samsung also appears to be working in the background on the development of a transparent display device. 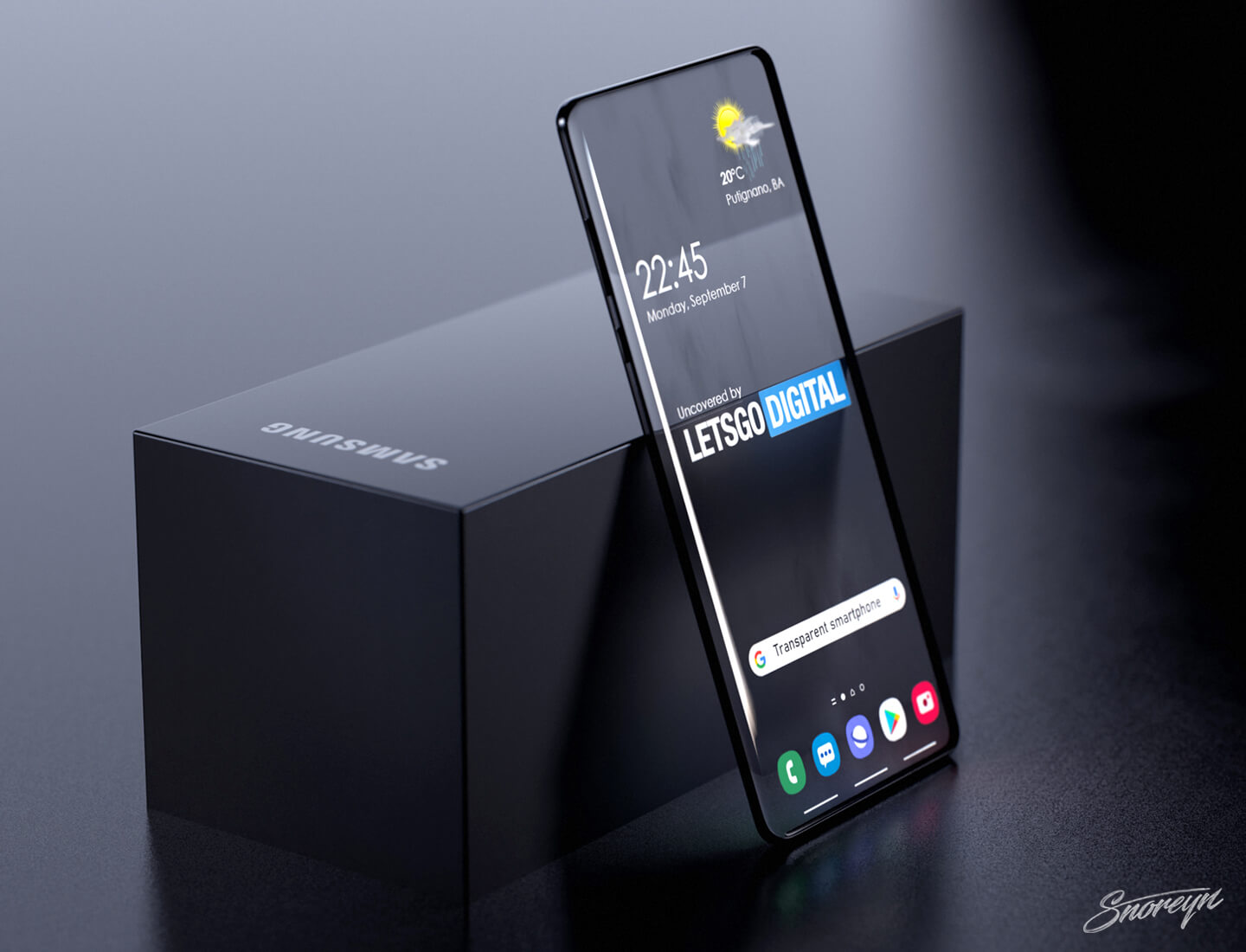 In January 2020, Samsung Electronics filed a utility patent with the USPTO (United States Patent and Trademark Office) and WIPO (World Intellectual Property Office). The patent was published on August 27, 2020 and describes the technology needed to create a transparent smartphone. Alternatively, the technology could also be applicable to other consumer electronics products, such as a TV, monitor, laptop, game console and / or camera.

As a basis, an OLED display is used, which is characterized by low power consumption, high brightness and a faster response time than conventional LCD displays. The OLED screen is equipped with a transparent luminous display panel through which light can shine. Thus, content can be displayed on the transparent screen while users can simultaneously see through the phone.

It can be a flat display, but also a flexible screen that can bend, fold and / or roll – according to the patent description. It is a technically defined patent that goes into great detail about the different layers and components required to achieve transparency.

The patent images show a modern smartphone with narrow bezels and a large transparent screen. Based on these images, LetsGoDigital create in collaboration with Giuseppe Spinelli, aka Snoreyn, a series of 3D renders to better visualize the patented technology. These renders are for illustrative purposes only. Giuseppe caused a furore earlier this year with his Galaxy Z Flip and PlayStation 5 concepts. 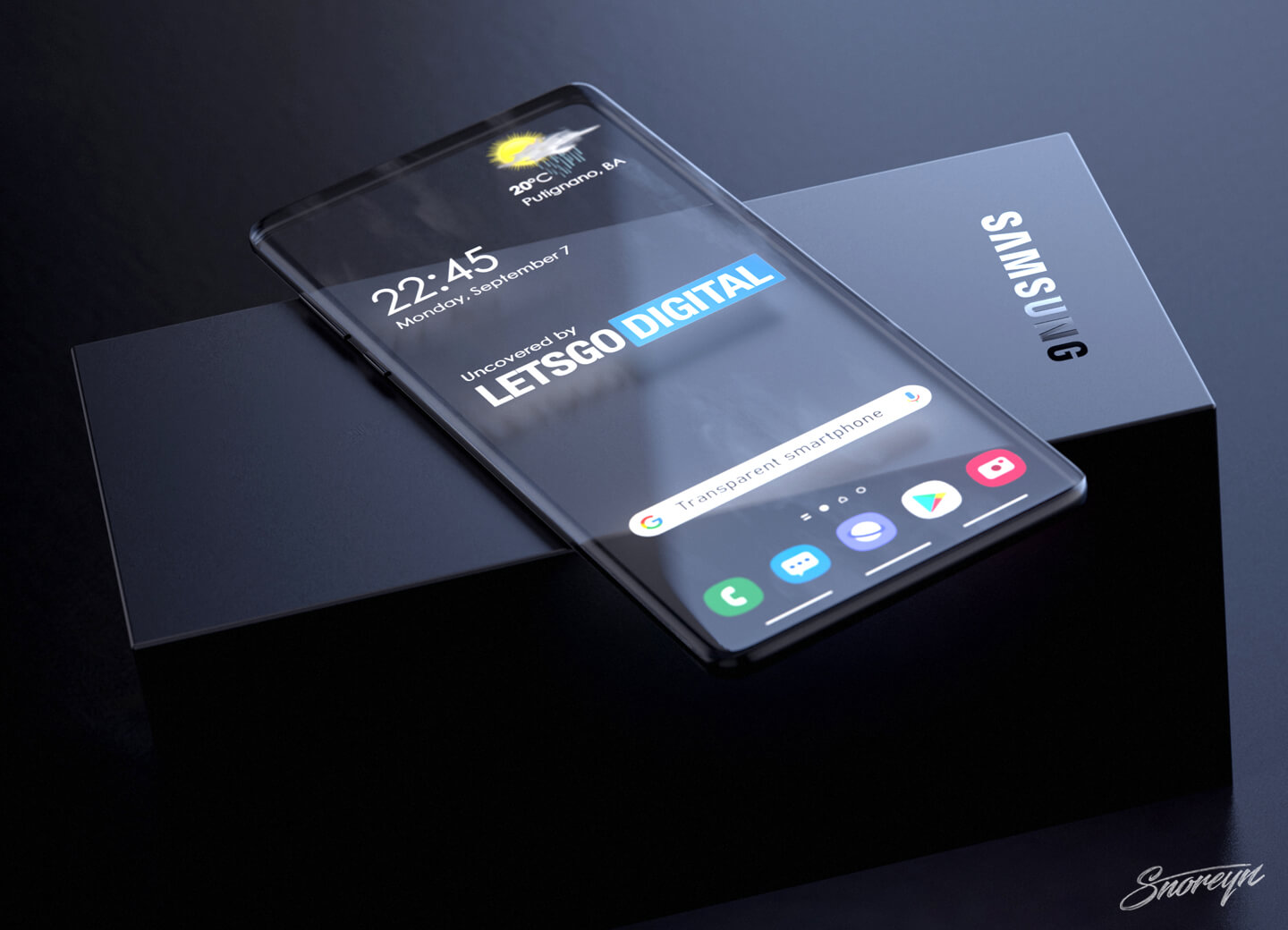 Advantages and disadvantages of transparent phones

Of course it sounds quite futuristic, a mobile phone that can be put in a transparent mode to see straight through the device. Your friends will certainly want to have a look at that! But is it feasible and what are the direct advantages and disadvantages of this technological innovation?

Although transparent phones are not yet available, we have seen some prototypes of transparent mobile displays over the years. Some feature phones have also been released with such a type of display, such as the Sony Ericsson Xperia Pureness.

The Chinese smartphone manufacturer Xiaomi also regularly releases Transparent Editions, including the recently introduced Xiaomi Mi 10 Ultra. However, only the back of these devices is transparent. This gives users an insight into the components that are processed in the phone.

This immediately reveals an important disadvantage when it comes to the development of real transparent smartphones. Where should the necessary components such as the battery, PCM and camera be placed if the device is transparent on both sides? These cannot be placed behind the screen as is currently the case. It is therefore very plausible that a transparent smartphone must have a relatively wide bezel in order to process the necessary components.

Yet this wide bezel is not visible on Samsung’s drawings. This was the case, for example, with the transparent Sony smartphone, which had a big metal frame at the bottom. However, the patent description describes that Samsung can also choose to make only part of the screen transparent, perhaps this can help to solve this problem. In addition, manufacturers have been working for some time on the possibility to downsize components without compromising functions. 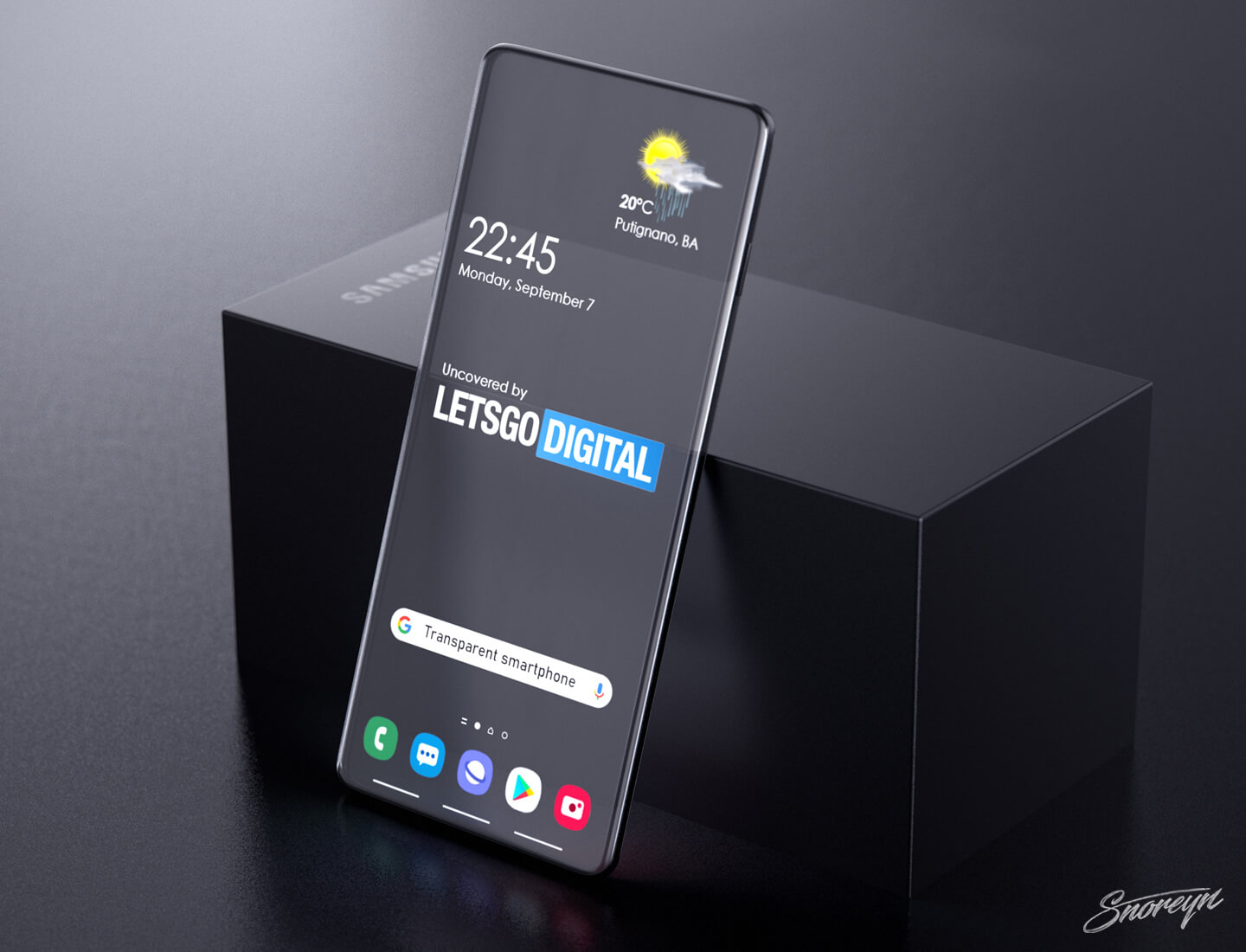 Another potential drawback is; what about the viewing experience? Some phone models have been released with a 3D display. In practice, however, it appears this does not always provide the desired user experience. Many people get disoriented from the 3D effects or get even nauseous. Although a transparent display will offer a completely different experience, the question remains to what extent our eyes can properly distinguish between the foreground and the background.

For example, when you look at multiple icons on your start screen, this can be quite fatiguing to your eyes if the background also contains different elements. On a plain background this will undoubtedly be less harmful, optionally you can also adjust the brightness of your screen – this would, however, have a negative effect on the battery life of your phone.

In addition, you may wonder what the added value of a transparent smartphone is. Okay, it’s certainly a nice gimmick, but does such a phone actually offer added value? It is possible that the added value should be sought in a double-sided touch screen with new operating options. For example during photography, where the transparent screen can function as a viewfinder. In addition, a double-sided screen can help with multi-tasking, so you can run a different application on both displays. Perhaps certain advantages can also be achieved in the field of Augmented Reality.

However, the benefits seem to be quite limited compared to the costs involved in developing such technology. The question is therefore; will there be a market for this type of mobile phones?

Over time, other types of electronics products have been released with a transparent screen. Consider, for example, the 55-inch transparent OLED Signage from LG. A number of transparent OLED TVs have also been announced, including by Haier.

Samsung itself has already introduced very transparent displays for the B2B channel in the past. The company has also released a mirror display and transparent OLED Signage, intended for promotional purposes or displaying a welcome message. However, all these products were introduced about 5 to 10 years ago, in recent years we have heard remarkably little about transparent display technology.

The fact remains that Samsung Electronics filed this patent at the beginning of this year with the USPTO and WIPO. It therefore appears that the Korean manufacturer is still exploring new possibilities to develop such a transparent display device for mobile devices. 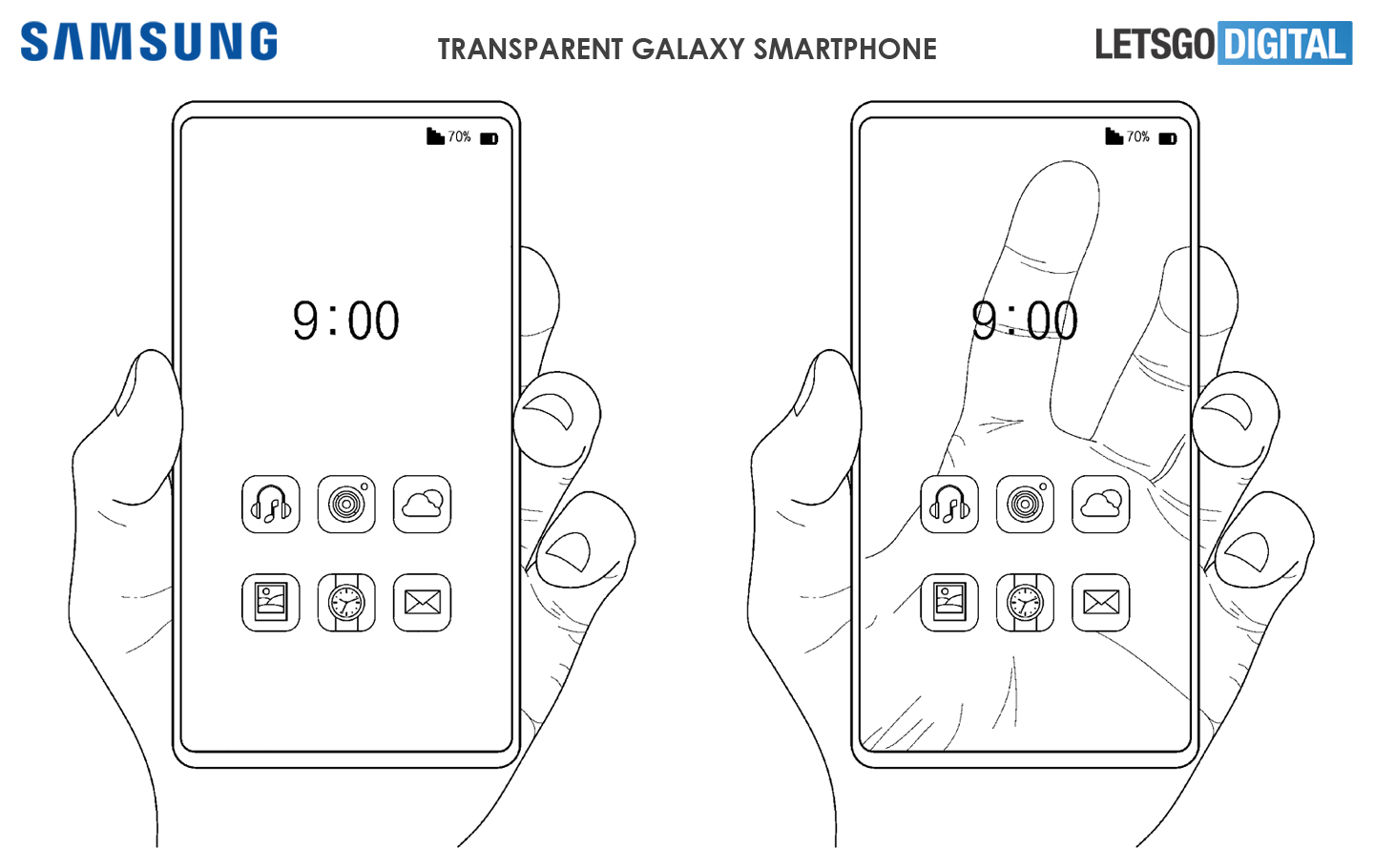 View the documentation about the Samsung smartphone with transparent display here.

Note to editors : The product renders presented in this article are copyright protected by LetsGoDigital. The images are based on the patent drawings from Samsung Electronics and are for illustrative purposes only. This product is not for sale, it’s a concept. You can use the 3D artwork for free, as long as you include a clickable source link into your publication. Thank you very much for understanding.