Earlier this month, the Samsung Galaxy Note 20 series was announced with the Note 20 Ultra being the new top model. Is this smartphone not yet exclusive and luxurious enough for you? Caviar comes up with an alternative, as the Russian company is introducing a new Limited Edition collection based on Samsung’s flagship called ‘Eternity’. The new series contains of four phone models, all of which are inspired by an architectural monument of international importance.

The bronze Samsung Galaxy Note 20 Ultra is used as the basis for the Limited Edition smartphones, of which Caviar has richly decorated the back with luxurious materials, including marble and rose gold. The marble case is a reference to the monumental art and architecture, while rose gold is a luxurious interpretation of the new bronze color presented by the Korean manufacturer as ‘Mystic Bronze’. 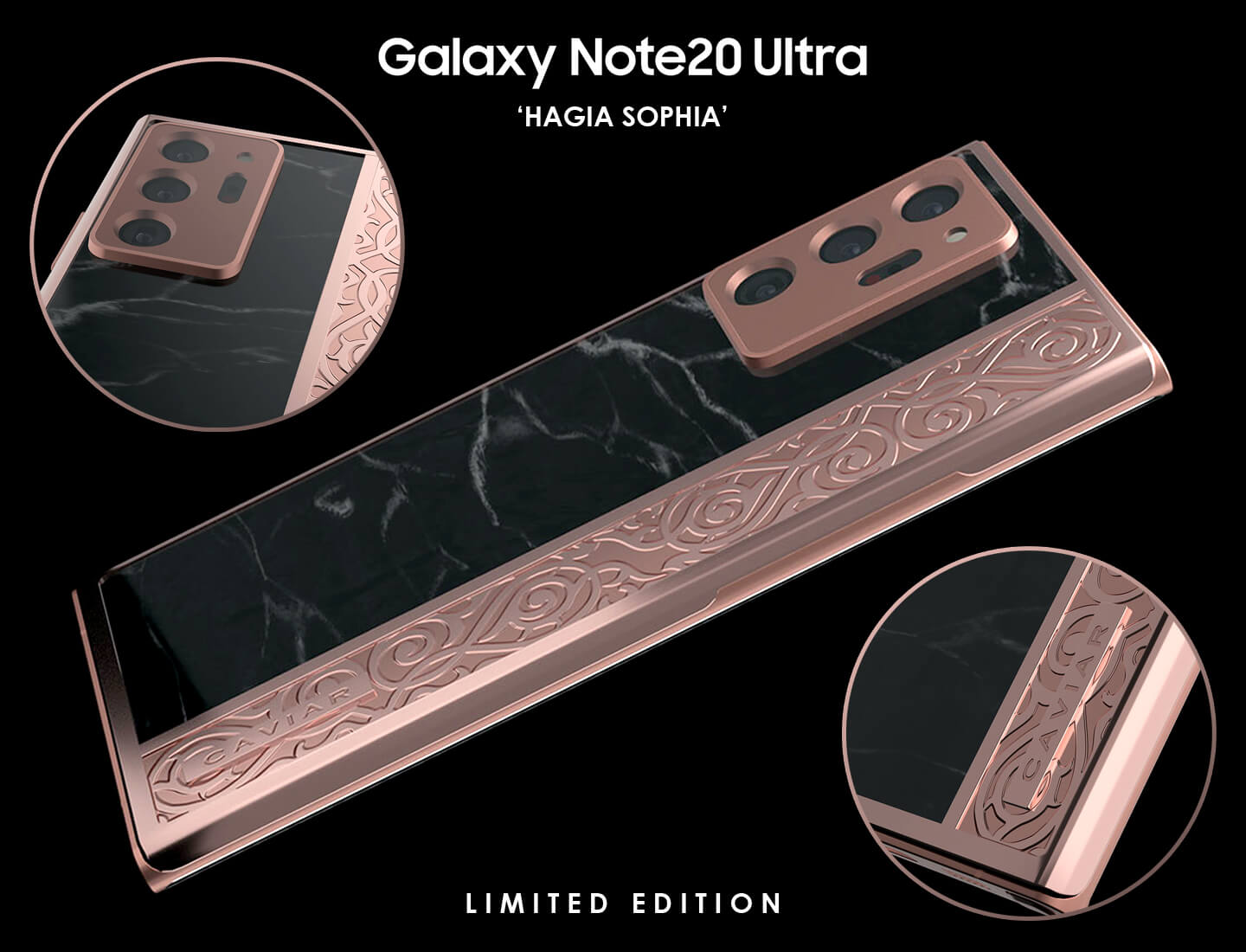 The black marble refers to the interior of the Hagia Sophia in Istanbul. This former Christian cathedral was in the news earlier this week after Turkish President Erdogan decided to re-use the unique structure as a mosque. The building served as a museum for the past 86 years and two and a half decades ago, the Hagia Sofia was declared a World Heritage Site by Unesco.

For this luxury smartphone you have to dig deep into your wallet, as the suggested retail price of this Samsung Galaxy Note 20 Limited Edition phone is set at $ 5,830 USD. For this you will receive the 256GB variant. You would certainly be unique with it, as Caviar will only produce 99 copies of this model. 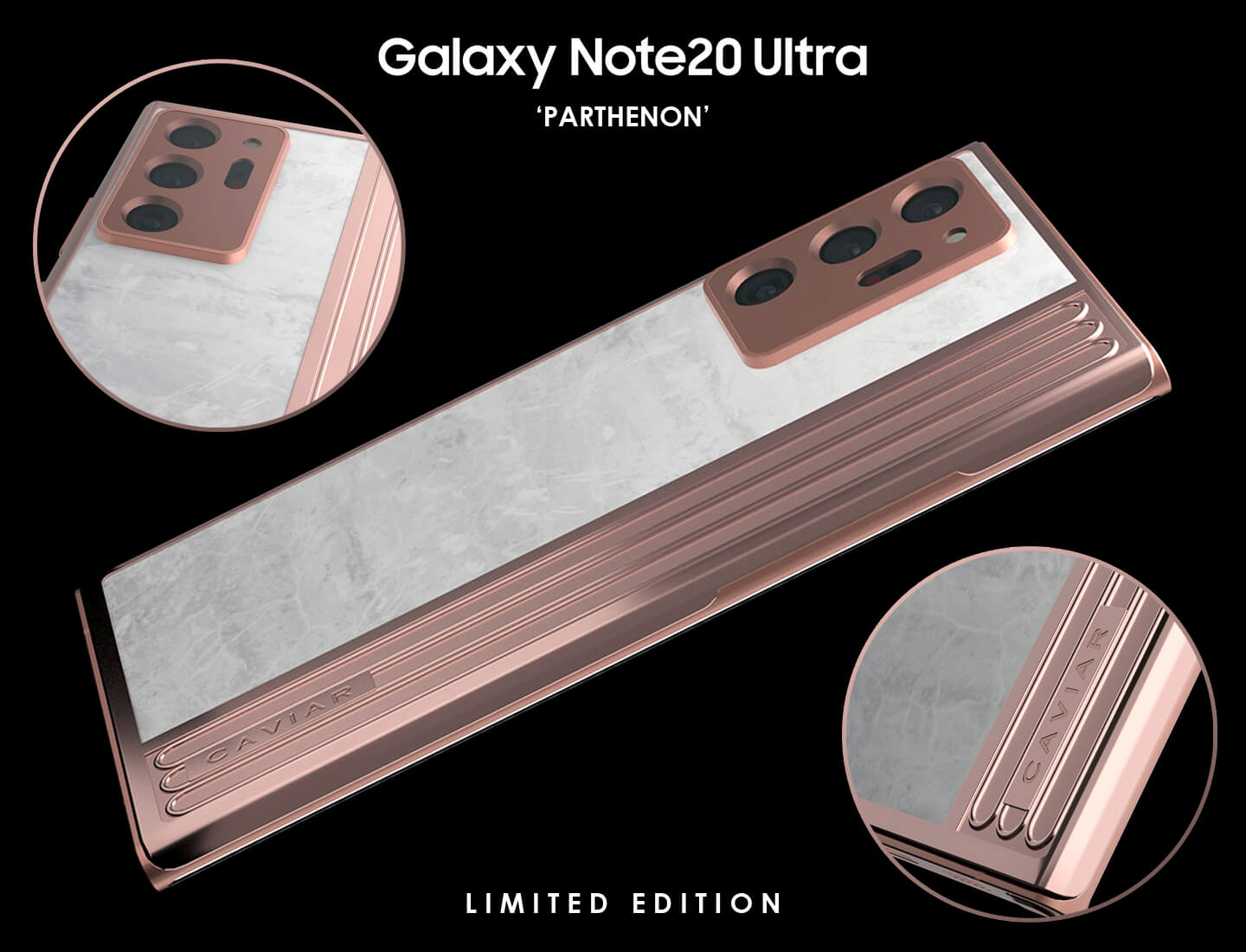 Caviar’s second Limted Edition phone is enriched with white / light gray marble, referring to the architectural appearance of the Parthenon. This ancient Greek building is a temple for the patron goddess ‘Athena Parthenos’. The temple is the pinnacle of the 156m high table mountain the “Acropolis of Athens”.

The Greek temple is characterized by a series of columns, which Caviar has also reflected in the design of the Note 20 Ultra Limited Edition. Three rose gold columns are visible next to the white marble. The combination of white stone and rose gold creates a classic look with a refined sense of luxury.

This Limited Edition 5G phone is slightly cheaper than the black version. The model with 256GB of memory is priced at $ 5,750 USD. Only 99 copies of this exclusive phone will be produced. Caviar delivers each phone in a luxury case, which also makes it a wonderful business gift. Last year, LetsGoDigital was able to experience the service of Caviar by ordering a Galaxy S10 Limited Edition ourselves. 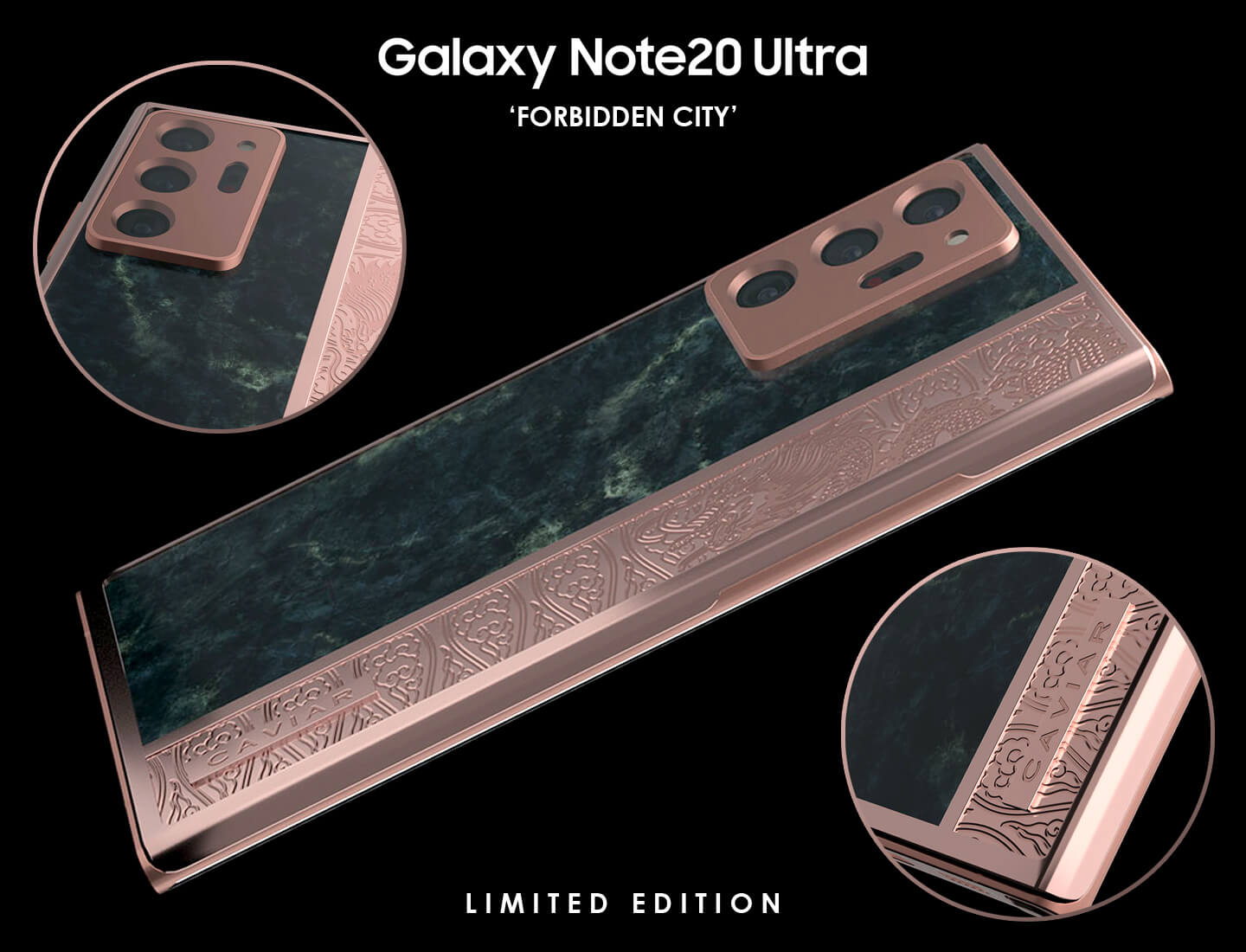 Within the Eternity series Caviar has also released a model with green marble. This Samsung Galaxy Note 20 Limited Edition refers to the ‘Forbidden City’. This is the Forbidden City in Beijing, from which the Chinese emperors from the Ming dynasty ruled their empire. The palace complex consisted of 980 buildings, spread over an area of ​​no less than 720,000 m2.

Each building is distinguished by its unique decoration, which Caviar integrated in a characteristic way in the rose gold design. It’s decorated with beautiful ornaments referring to the richly decorated temples in the Forbidden City. The Imperial Palace is, just like the aforementioned buildings, included on the World Heritage List of Unesco.

The price for this unique Galaxy Note 20 Ultra with 256GB of memory is set at $ 6,060 USD. This Limited Edition series also consists of 99 pieces. A unique number will be engraved on the side of the device, meaning you can tell exactly which number your device has. A certificate of authenticity will also be included. 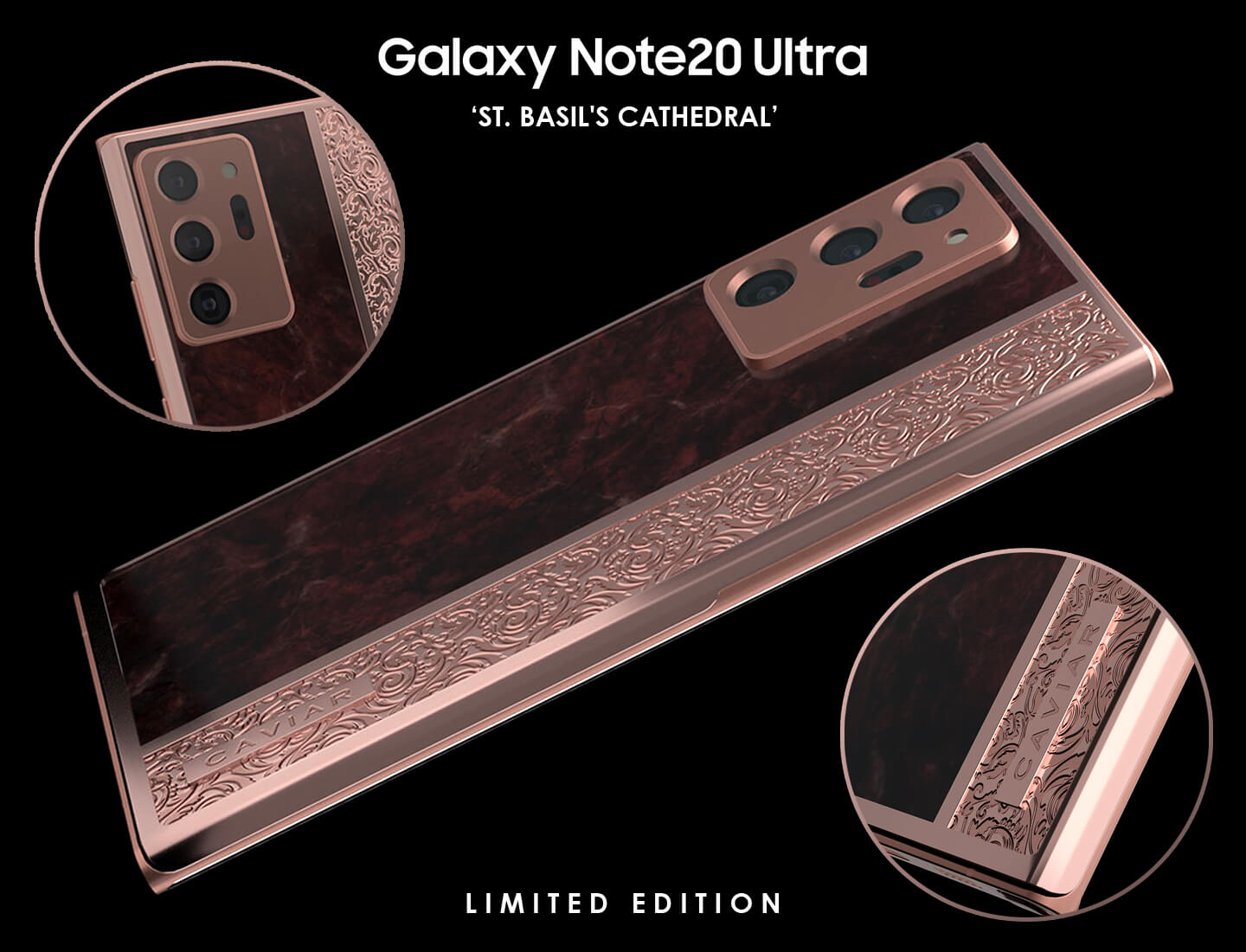 The latest Limited Edition model from Caviar features red marble, which is adorned with relief ornaments that refer to the decorative facades of St. Basil’s Cathedral. This Russian Orthodox church on Red Square in Moscow is also called the “Cathedral of the Intercession of the Most Holy Theotokos on the Moat”.

The red-brown marble variant is the most expensive model from the new Caviar collection. The price for this Limited Edition phone is set at $ 6,260 USD. Only 99 copies of this Galaxy Note 20 Ultra will be produced. Caviar offers free delivery anywhere in the world. In addition, you will receive a one-year service guarantee.

As for the specifications, Caviar uses the Galaxy Note 20 Ultra as a base – meaning that all features and specs are the same. The phone sports a 6.9-inch curved AMOLED display with a 120 Hertz refresh rate. There is a 10 megapixel selfie camera and a triple camera on the back. This camera system consists of a 12 megapixel ultra-wide angle camera, a 108 megapixel wide angle camera and a 12 megapixel zoom camera with 5x optical zoom. A Laser AF sensor is also built in and the 8K video function is also available.

Furthermore, the Note 20 Ultra has a renewed S Pen with reduced latency. The Android 10 smartphone is powered by the Exynos 990 chip that is supported by 12GB RAM and 256GB / 512GB storage memory. To provide the phone with enough power a 4,500 mAh battery will be built in.