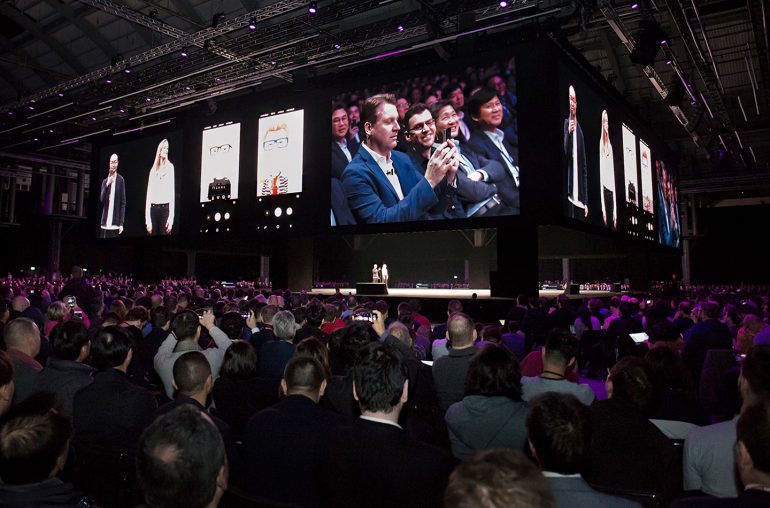 At Mobile World Congress 2018 Samsung introduced their new Galaxy S-series, consisting of the S9 and the S9+. The design looks similar to the S8 series, except for the fingerprint sensor, which has been moved a few centimeters. Internally, several improvements have been implemented. The Galaxy S9 series offer a newly developed low-light camera, super slow motion video and personalized AR Emoji. Below you’ll find the press release from Samsung. 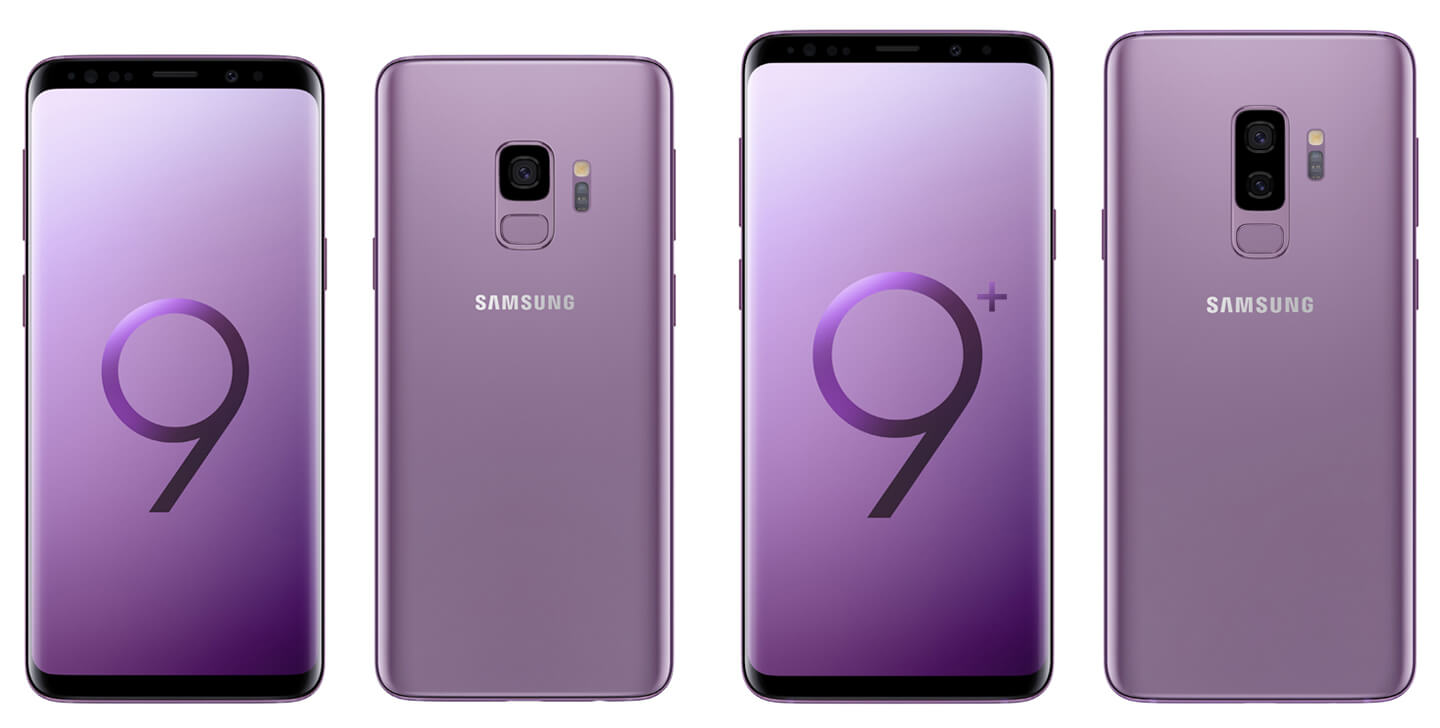 Samsung Electronics Co., Ltd. introduces the Galaxy S9 and S9+, the smartphones that reimagines the way we communicate, share and experience the world. Made for the way we increasingly communicate and express ourselves more with images, videos and emojis, the smartphones drive innovation with Samsung’s advanced camera. Redesigned with a new dual aperture lens that powers an innovative low-light camera, Super Slow-mo video capabilities and personalised AR Emoji, the Galaxy S9 and S9+ ensure users do not miss a moment and make their everyday epic.

The way we use our smartphones has changed as communication and self-expression has evolved. With the Galaxy S9 and S9+, we have reimagined the smartphone camera. Not only does the Galaxy S9 and S9+ enable consumers to shoot great photos and videos anywhere, it’s a smartphone that’s designed to help them connect to others and express themselves in a way that’s unique and personal to them, said DJ Koh, president and Head of IT & Mobile Communications Division, Samsung Electronics.

Camera features of the Galaxy S9

Today’s cameras are for more than taking pictures – they’re for connecting and communicating. Consumers want a smartphone camera with state-of-the-art technology so they can express themselves with high-quality images and tools to tell their own, unique story. The cameras of the S9 series are built with these consumers in mind, with a Super Speed Dual Pixel sensor with dedicated processing power and memory to take amazing shots with high photo quality. The camera features of the Galaxy S9 and S9+ include:

Super Slow-mo: Make every day moments epic with dynamic, slow-motion video that captures 960 frames per second. The Galaxy S9 and S9+ also offers automatic Motion Detection, an intelligent feature that detects movement in the frame and automatically begins to record – all users have to do is set up the shot. After capturing the Super Slow-mo video, users can select background music from 35 different options or add a tune from their favourite playlist. Users can also easily create, edit and share GIF files with a simple tap in three playful styles of looping to watch the action over and over again.

Low Light Camera: Good lighting is the secret to any great photo. But often, photos are taken in less-than-ideal lighting conditions and most smartphone cameras have a fixed aperture that can’t adjust to low or bright lighting environments resulting in grainy or washed out pictures. Similar to the way the iris of a human eye expands and contracts, Samsung’s Dual Aperture (F1.5/ F2.4) automatically lets in more light when it’s dark and less light when it’s too bright, taking photos that are crisp and clear.

Bixby Live Translation: Samsung’s intelligence platform, integrated into the camera, uses augmented reality and deep learning technologies to provide helpful information about a user’s surroundings. With real-time object detection and recognition, Bixby instantly generates information directly on top of the image that the camera is pointing at. Users can translate foreign languages and currency in real time with Live Translation, learn about their surroundings, purchase products seen in the real world and track calories throughout the day. 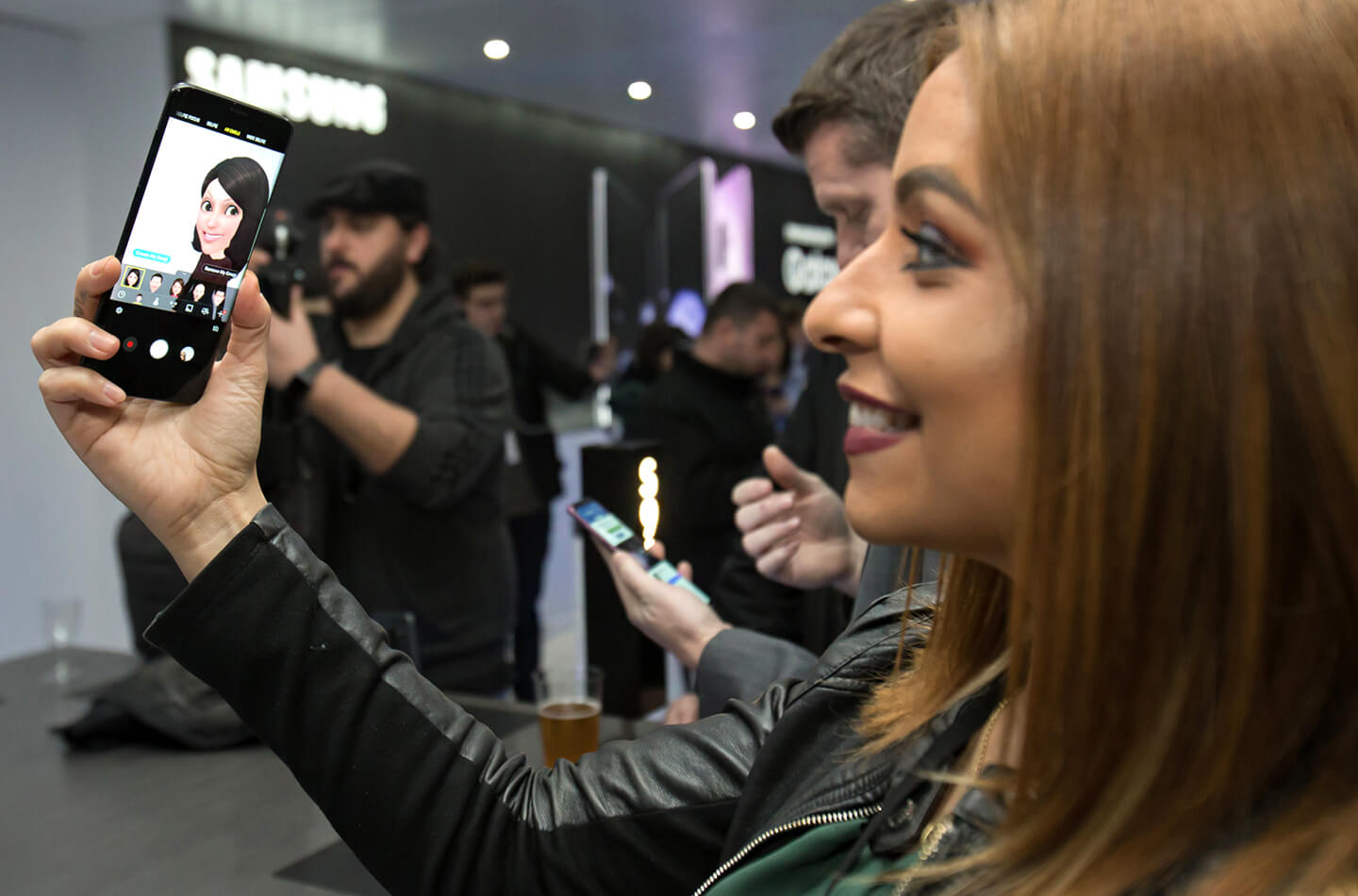 AR Emoji: Samsung lets users create an emoji that looks, sounds and acts like them. The AR Emoji uses a data-based machine learning algorithm, which analyses a 2D image of the user and maps out more than 100 facial features to create a 3D model that reflects and imitates expressions, like winks and nods, for true personalization. AR Emoji shares your real-life feelings not only in video but also with a range of stickers in uses a standard AGIF file format so users can share their emojis across most third-party messaging platforms.

Smartphones are often our go-to choice for entertainment, which is why Samsung created a device that offers premium sound experiences with stereo speakers tuned by AKG. Whether users are watching their favourite movie or streaming their favourite artist’s latest album, sounds are clear, crisp and rich in quality. The Galaxy S9 and S9+ also support Dolby Atmos, giving the effect of 360-degree sound.

The audio experience is complemented by Samsung’s revolutionary Infinity Display. First introduced on the Galaxy S8, the bold, bright Super AMOLED Infinity Display blends right into the phone with virtually no distracting notches. With adaptive contrast enhancement, users can use their device even in direct sunlight. 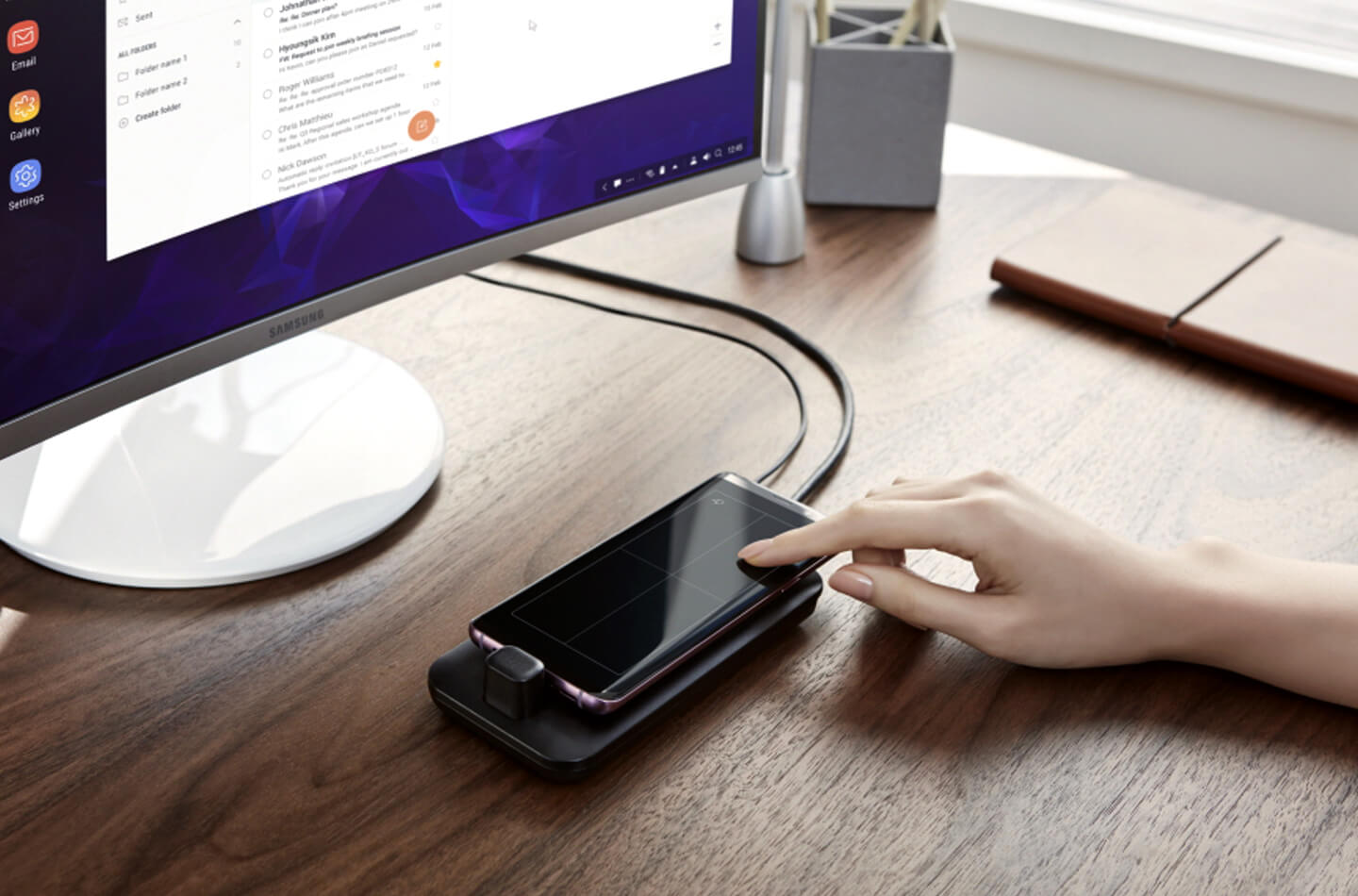 As the first smartphone to support the new SmartThings app, the Galaxy S9 and S9+ are the central hub to manage every facet of the connected lifestyle at home, at the office or on the go. The SmartThings app will be introduced with S9 and S9+ and is able to connect to other Samsung and non-Samsung devices.

For those constantly on the move, the next-generation Samsung DeX empowers a mobile lifestyle by bringing a large, full-screen experience to the mobile handset. With DeX Pad, a new docking system, users can easily connect the Galaxy S9 and S9+ to a larger monitor, keyboard and mouse to expand the mobile experience with enhanced document editing or even full-screen gaming. Users can also transform the Galaxy S9 smartphones into a Touch Pad with the DeX Pad. 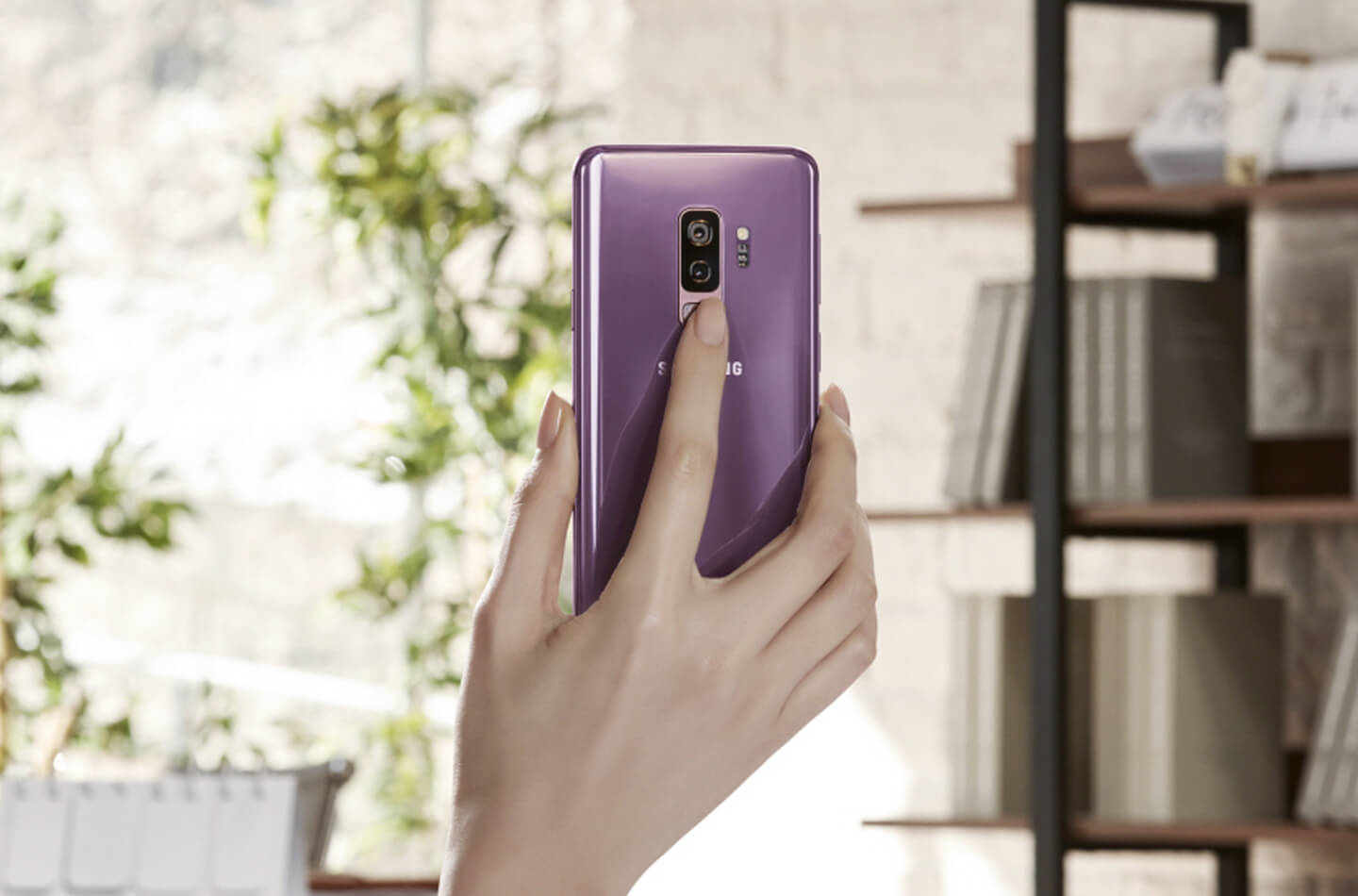 Samsung sets the gold standard for smartphones including IP68 water and dust resistance, and wireless charging. The Galaxy S9 and S9+ go a step beyond. The devices now support expandable memory of up to 400GB with a Micro SD Card and are equipped with the latest premium application processors offering powerful performance and sophisticated image processing.

In addition, the Samsung Galaxy S9 smartphones give users the peace of mind knowing that their phone is protected by Knox 3.1, Samsung’s latest defence-grade security platform. The S9 series support three different biometric authentication options – iris, fingerprint, and facial recognition – so users can choose the way they want to protect their device and applications.

The devices support Intelligent Scan, a new verification that intelligently uses the collective strength of iris scanning and facial recognition technology to quickly and conveniently unlock a user’s phone in various situations. The new Galaxy S series also introduce Dedicated Fingerprint, giving users the option to use a different fingerprint to access Secure Folder than the one used to unlock the phone.

The Samsung Galaxy S9 and S9+ takes health to the next level with an improved optical sensor built directly into the device, providing richer, more accurate information on user’s health status. This sensor allows the smartphone to keep track of users’ Heart Load Factor, a new measurement of the real-time demand placed on your heart. 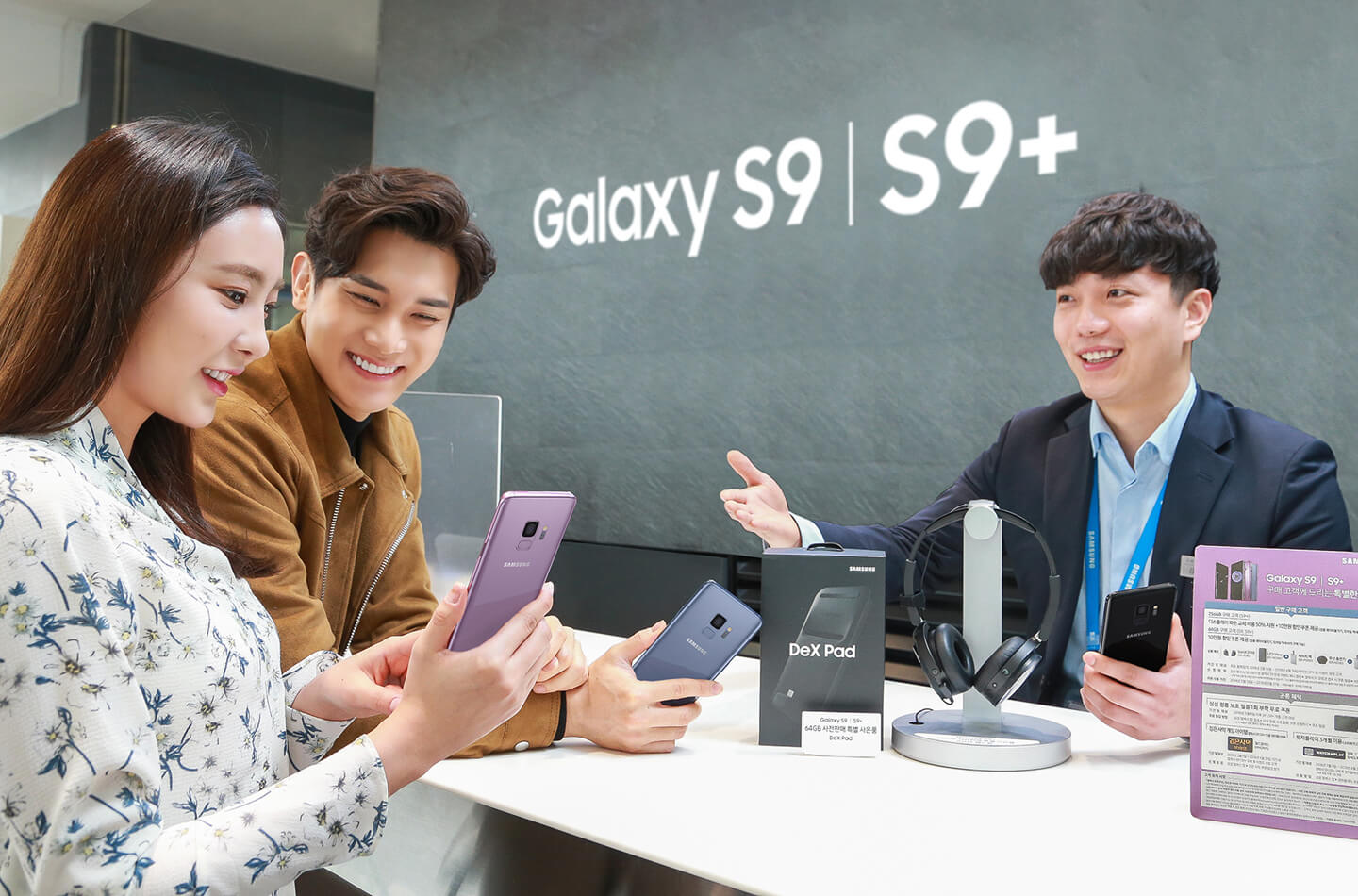 The Galaxy S9 and S9+ will be available starting 16th March in Midnight Black, Coral Blue, Titanium Grey (not available in Europe) and a new hue, Lilac Purple. Pre-order is now open.